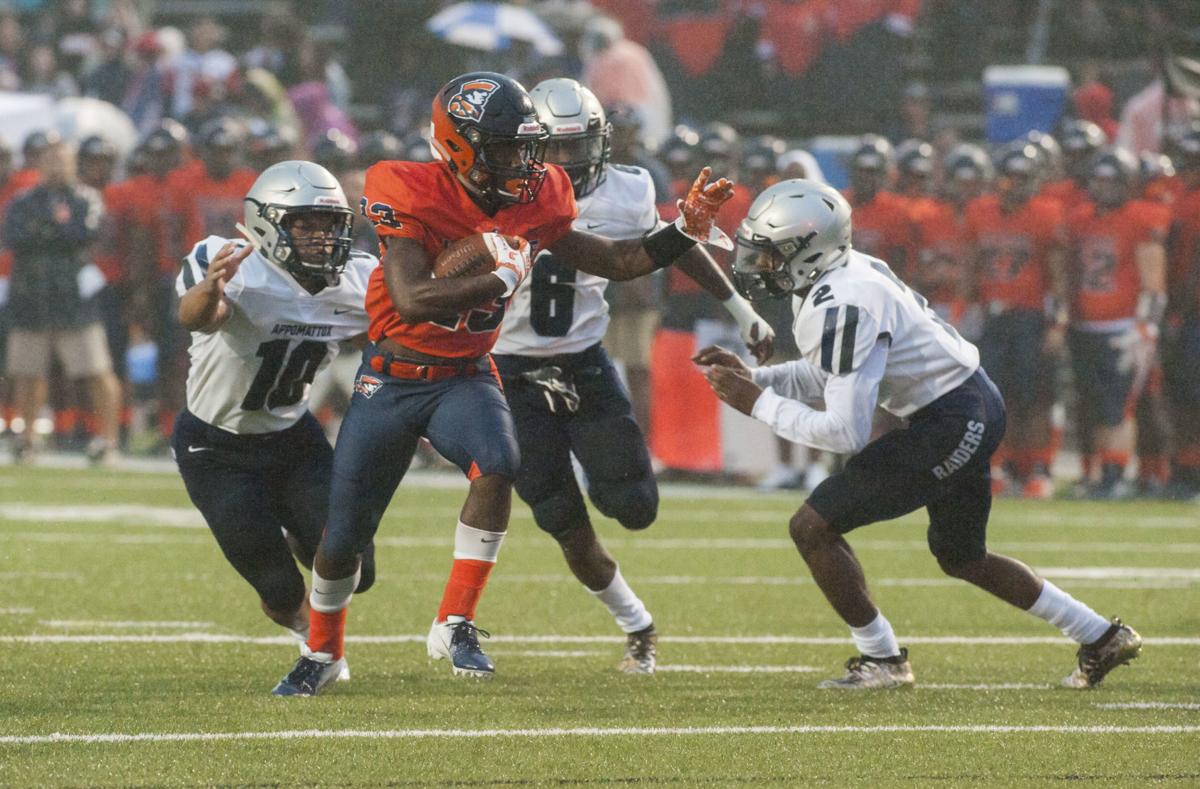 Heritage's Kyron Thomas carries the ball during a game against Appomattox at City Stadium on Sept. 13. 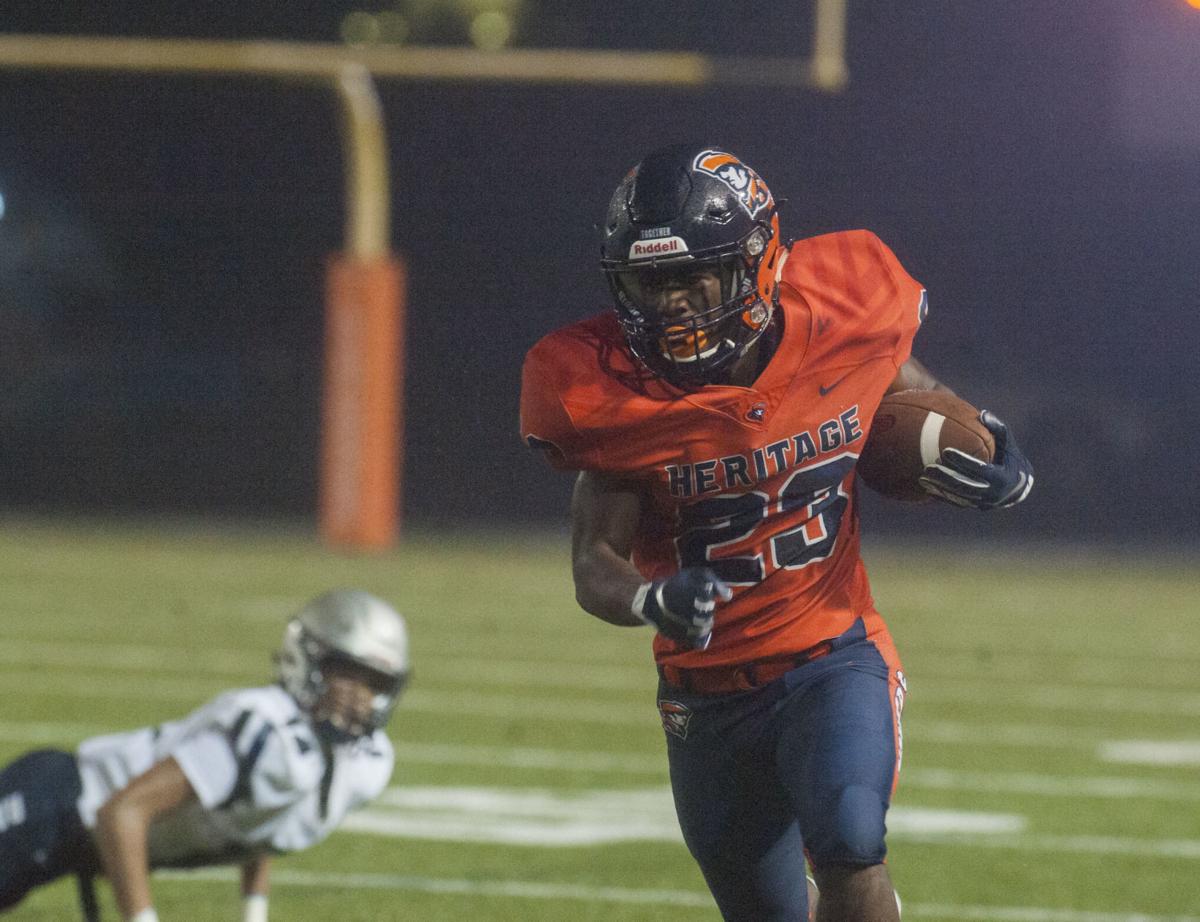 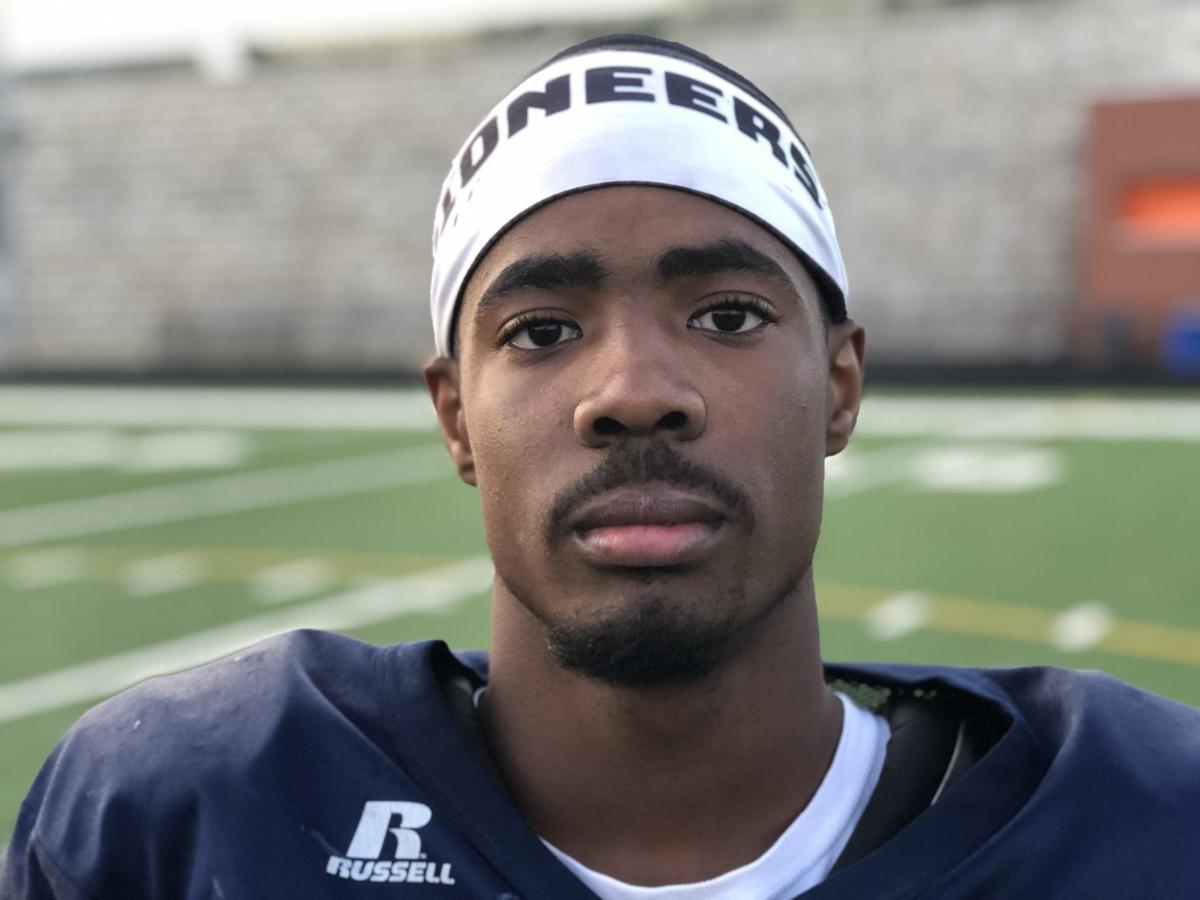 Heritage's Kyron Thomas carries the ball during a game against Appomattox at City Stadium on Sept. 13.

Never mind the 5-foot-8, 157-pound frame. You don’t have to be the tallest, biggest or fastest when you have heart. And Thomas has always had that. He’s the guy who isn’t going to give up, who demands greatness from his peers and who has played hurt throughout his career.

Take 2018 for instance. Thomas suffered a knee injury in Heritage’s first scrimmage, before the state championship campaign even began. He received constant treatments and stayed on the gridiron because he couldn’t stand leaving his teammates behind.

“Most of the time I was [in pain],” Thomas said this week. “But when you get out on that field, all the feeling just goes away, because this is the best game in the world. You just try to do everything you can to play another 48 minutes with your brothers.”

Thomas will play in his 37th straight game tonight when Heritage (5-1) travels to Brookville (3-3) for a 7 p.m. matchup in the Timberlake Road rivalry. The senior hasn’t missed a varsity game since the start of the 2017 season.

“He’s a tremendous kid to coach. He’s fun to coach,” Heritage coach Brad Bradley said. “But more than talent, he’s got heart and dedication and commitment, which I think our program is built on.”

The evolution of Kyron Thomas has been a fun thing to watch. He emerged as a defender, then a running back, then a receiver. And at every stage, he’s played behind older, flashier players.

At running back a couple years ago, he took occasional totes, but played behind the venerable Elijah “Lala” Davis. When he moved to receiver, Heritage showcased Kevin Moss and a Division I prospect in Chris Megginson.

He’s done just that so far. Thomas plays wide receiver and free safety. He currently leads the receiving corps with 407 yards off 18 catches, good for 23 yards per reception, and has hauled in four touchdowns from sophomore quarterback Kameron Burns.

“He’s kind of waited for this year,” Bradley said. “It’s his opportunity now.”

Thomas was a leader as a junior last season. Bradley remembers receiving a message from Thomas the night before the state championship game.

The gist of the message: Get some rest, coach. Relax. We’ve got your back tomorrow. At the end of the day we’ll state champs.

Thomas, of course, was right. And he’s already making another prediction.

“We have a great team. Most people don’t know that,” he said. “Right now, we’ve still got a few missing pieces of the puzzle. But once that puzzle gets complete, it’s gonna be a heck of a team. …

“Our main goal is a state championship, and I believe we’ll do it. This team, nobody’s giving us a chance.”

Thomas began playing football at age 4. He grew up playing with the Timberlake Lions; so when Heritage goes against Brookville, Thomas plays against players he grew up with.

“It’s gonna be a great game,” he said, “but in between those hashes for 48 minutes, there ain’t no friends. After the game we can dap it up and take pictures, but while it’s going on, if you got another helmet on, I’m gonna come at you.”

And that’s what Thomas means when he talks about having heart. He feels underrated because of his size, so he makes up for it by being fierce.

“I don’t care what size you are, I’m gonna go out and play my game the whole time, I’m gonna contribute and make sure we come out on top,” he said.

Thomas is part of a talented receiving corps, the kind Heritage always seems to showcase these days. He works alongside with fellow senior Brian Trent (263 yards) and junior Jahee Blake (112 yards) with Burns (875 passing yards).

Thomas has been everywhere for Heritage. He corralled three interceptions when Heritage defeated Appomattox in 2017. When the Pioneers won a state semifinal matchup at Staunton River in 2017, Thomas came up with a game-saving tackle on third-and-4 to stop the Golden Eagles’ final fourth quarter drive in the red zone. As a junior, he posted 180 receiving yards.

In his first couple of varsity seasons, Thomas said he’s benefited from older players who taught him defensive styles and running and receiving routes. That’s how football is, and how life is, too. No one makes it on his or her own; everyone, at some point, must rely on someone else.

But there’s no time like the present, and Thomas is reveling in it.