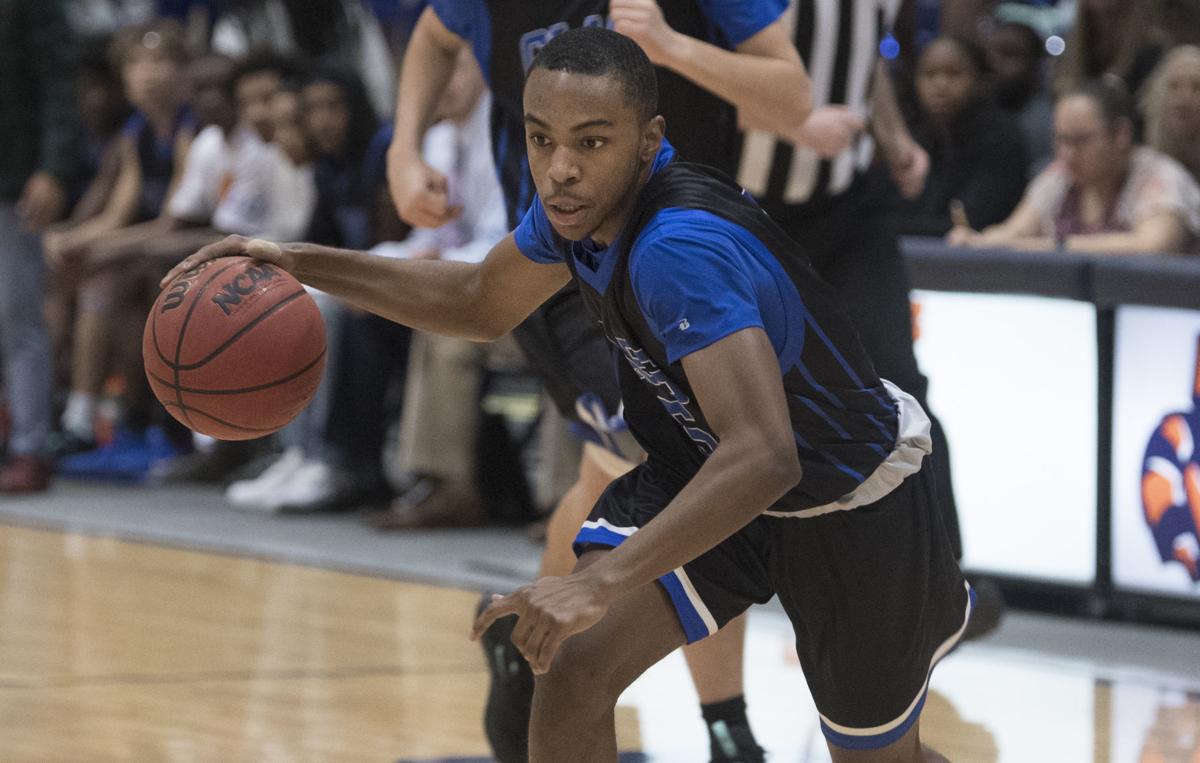 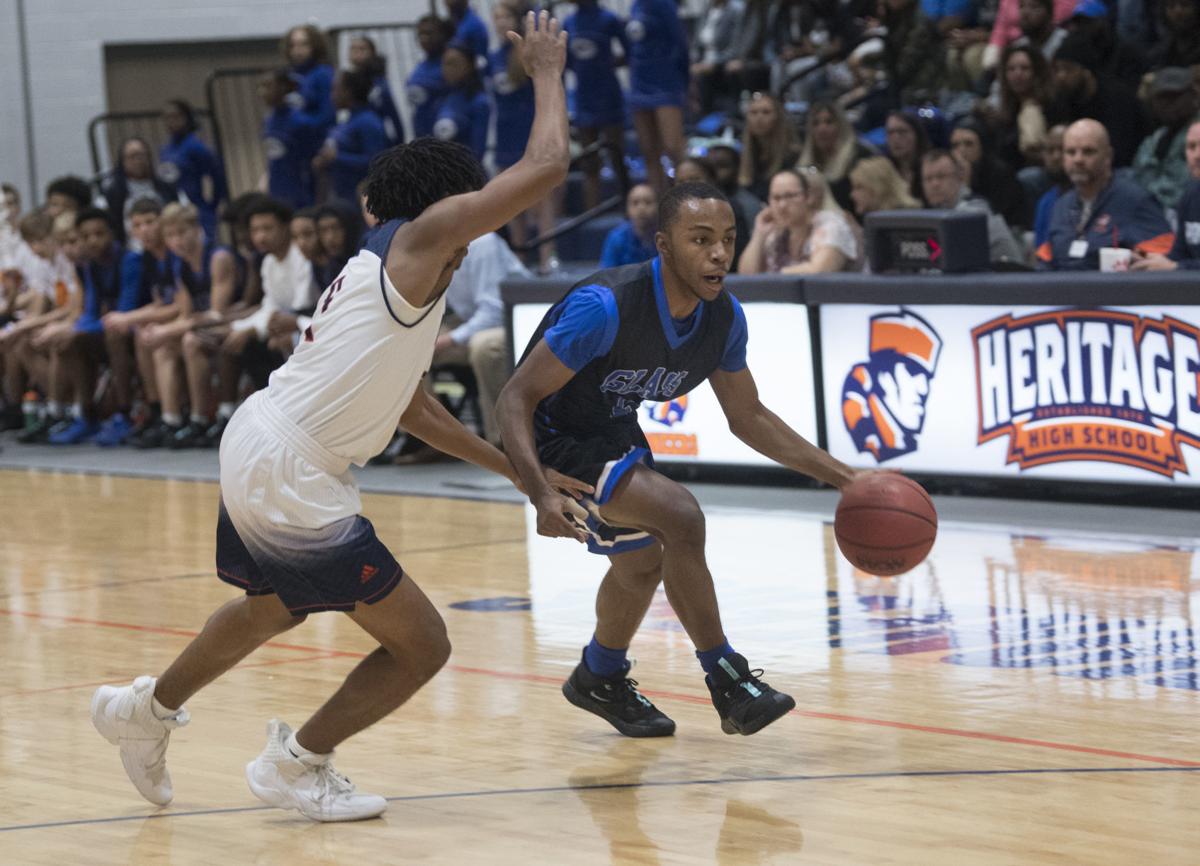 E.C. Glass senior Rayvon Graham looks to drive from the perimeter against Heritage on Feb. 3, 2020. Photo by Lee Luther Jr. 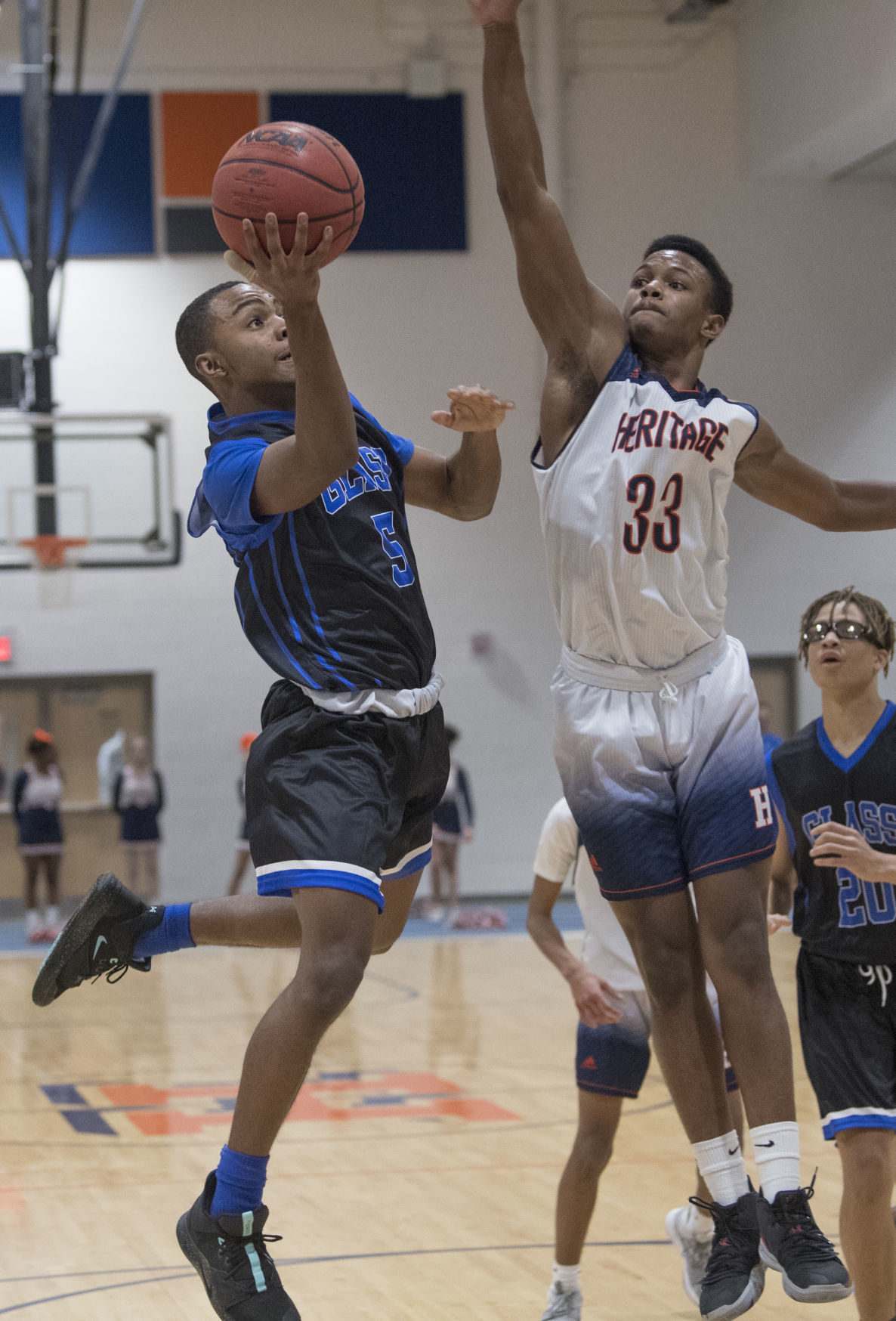 E.C. Glass senior Rayvon Graham drives to the basket for a layup against Heritage's Keshaun Hubbard on Feb. 3, 2020. Photo by Lee Luther Jr.

E.C. Glass senior Rayvon Graham looks to drive from the perimeter against Heritage on Feb. 3, 2020. Photo by Lee Luther Jr.

E.C. Glass senior Rayvon Graham drives to the basket for a layup against Heritage's Keshaun Hubbard on Feb. 3, 2020. Photo by Lee Luther Jr.

Rayvon Graham stood in the gym last week and hoisted up shot after shot. The sun had set in midtown, and E.C. Glass’ varsity basketball team had just started practice.

“Basketball is my first love,” Graham said. “If I didn’t have basketball, I don’t know what I’d do.”

That he’s here — practicing and playing, actually able to shoot and dribble and pass and catch — might be some sort of minor miracle, or at least a testament to what can happen when one refuses to give up.

The regular season is coming to a close, which means Graham has entered the twilight of his high school career, because he’s a senior.

He’s spent almost the entire season riding the pine, the result of a horrific injury. But two weeks ago, out of nowhere, Graham suited up and played for the first time in his senior year, determined to make the most of the time he has left.

And he’s making his presence known.

It was an October afternoon and the beginning of the 2019-2020 basketball season was less than two months away. Graham was lifting in the E.C. Glass weight room, performing squats, when he dropped the weights.

They fell on his right thumb, smashing it.

“The tip of my thumb was hanging off,” he recalled. The injury was to his shooting hand.

Graham had put in countless hours of practice in the offseason. He’d gained weight, perfected his shot and worked on every facet of his game. Suddenly, all that work didn’t seem to matter.

Glass athletic trainer Jen Armstrong performed first aid on Graham before rushing him to the hospital. Graham is a quiet and reserved player, someone who rarely gets rattled, which is exactly what coaches want from their point guards. “And even during the injury,” Armstrong recalled, “he was calm. He really took it well.”

Graham underwent two surgeries over the next three months: one to put his thumb back together and one to remove the tip of his thumb. Doctors told him he wouldn’t play his senior season.

He’d been playing basketball since he was 5 years old and couldn’t imagine doing anything else. So Graham, understandably, was heartbroken. He had been a major contributor as a junior, playing in 26 games, averaging 9.69 points, 3.2 assists and 4.19 rebounds per game while shooting 81% from the free throw line and commanding the point.

But he wasn’t available when Glass began the 2019-2020 season on Dec. 2 with a 69-58 loss at Roanoke’s Patrick Henry. It was a rough opening night, but the Hilltoppers then caught fire and reeled off six wins in a row.

But even with other capable ball handlers, like guards Savion Austin and DreSean Kendrick, they missed their point guard. That much was obvious during a rough stretch that followed in early January, when Glass dropped four of six games.

Graham watched it all from the sidelines.

“It was horrible,” he said of sitting on the bench, unable to help his teammates. “Probably the worst two months of my life.”

Not having Graham was a blow to the Hilltoppers, who have endured numerous injuries and weathered sickness this season. In January, Glass lost another starter and a strong producer, senior Reashawn Spaulding, who suffered a broken wrist. The team also has played short-handed, as many other area teams have, because of flu viruses circulating the school.

Through up and down times, head coach DJ Best kept an eye on Graham.

But Graham was determined to play again. To do so, he’d have to endure a long process of recovery and then make some tough decisions.

While his thumb was healing, Graham wasn’t allowed to perform any physical activity. Then, gradually, he started with cardio exercises.

Then he started dribbling. After smashing his thumb he’d started performing tasks left-handed, “and that’s kind of made him ambidextrous on the court,” Armstrong added.

Then there were talks about whether it was smart to return.

“There was definitely talk part-way through [Graham’s recovery] about is it a real possibility?” Armstrong added. “We, his family, everybody said your thumb and your health are most important. You need that thumb for the rest of your life, and you don’t want to risk injuring it coming back, so we just took proper precautions.”

There was risk of infection and a chance he could re-injure his thumb during practices or in games.

But Armstrong noted, “He made a remarkable recovery.”

It’s showed on the court. In his first game back, against Liberty Christian on Jan. 24, Graham doled out six assists. Four nights later against Liberty in Bedford, he unloaded nine assists.

In six games, some of which included playing on restricted minutes, he’s averaging 9.6 points, 4.8 assists, 3.8 rebounds and 1.3 steals per game. That included a 19-point performance against Heritage High this week as Glass got revenge on the Pioneers for a loss earlier this season. Graham also finished that game with six assists, six rebounds and four steals. Glass, 13-7 overall, has won four of the six games in which he’s appeared.

Armstrong said Graham followed doctors’ instructions and worked hard to return to the court. “He’s done everything the right way,” she added.

Then the athletic trainer leaned inside her office, where Graham sat last week awaiting treatment. He wears a protective covering over his thumb when he’s on the court.

“Did you tell him why you healed up so fast?” Armstrong asked Graham. “What do you always say?”

The dark days of sitting on the bench are behind him.

“My family kept me motivated,” Graham said of the months he couldn’t play, “especially my coach and Ms. Armstrong.”

But he also learned a lot from the experience.

“I’ve always studied the game, but sitting on the bench showed me a lot more,” he said. “Showed me what I can do on the court to help my team out.”

Best, who has inserted Graham back into the starting lineup, agreed.

“He’s so much more effective on the floor because he was sitting down and seeing the game from a coach’s perspective,” he said.

Glass is near the top of the Seminole District standings. More importantly, the Hilltoppers once again are a force in the VHSL’s Region 4D. In a few weeks, they hope to break through in region play and then make the state tournament for the fourth time since 2013.

But there’s work to be done before thinking that far ahead. For instance, Glass plays its regular-season home finale tonight against Brookville. It’ll be Senior Night, a time of celebration for the team’s 11 seniors. It’ll be especially sweet for Graham, who just a few months ago, was told he wouldn’t play on such a special occasion.

“It feels great,” Graham said when asked what it was like to be back and contributing, “just to be with my teammates. I push them to be better and they push me to be better every day.”

On Monday, after helping Glass survive an overtime thriller against Heritage with his mammoth performance, Graham stood at the bus that would carry he and his teammates back to Hilltopper Country.

“Ever since I missed that last one,” he said of the game between the two rivals in January, “I’ve just been waiting.”

He’s normally reserved and stoic, but those mannerisms dropped away momentarily, and Graham smiled.

“I’m back,” he said through his grin.

Two simple words that belied the painstaking process of getting back on the court.

Then he repeated: “I’m back,” and this time, those words took on greater significance.

They meant overcoming the odds. They meant a kid from midtown willing himself back onto the court for one last go-around with his friends.

And they meant that sometimes, there are hoop dreams that refuse to die.

BEDFORD — Rayvon Graham put on a show here Tuesday night, but the E.C. Glass point guard had more on his mind than just a Seminole District To…