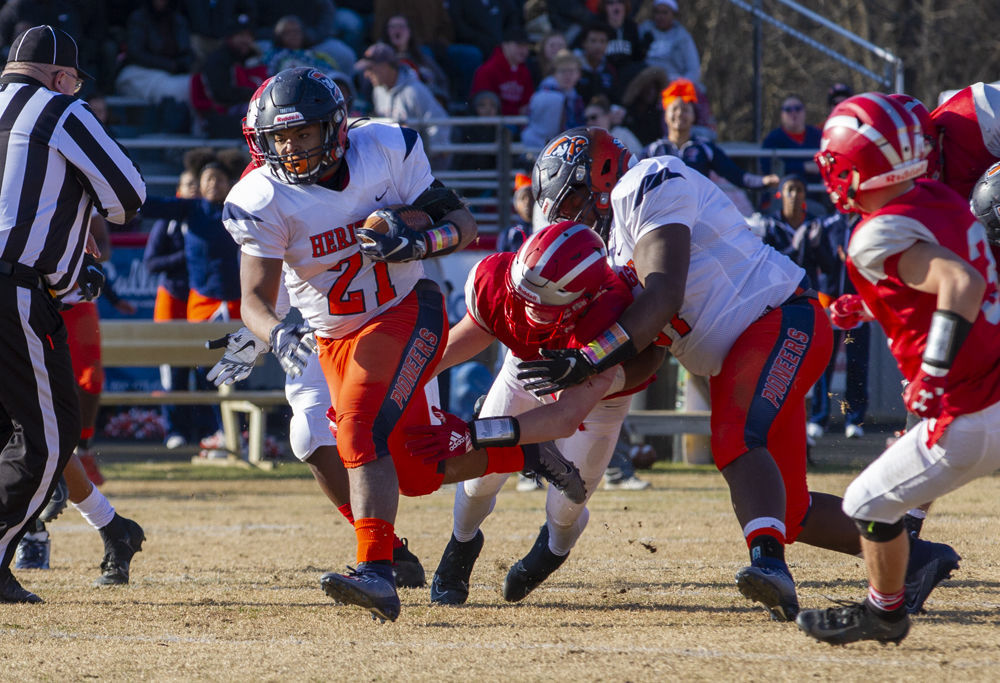 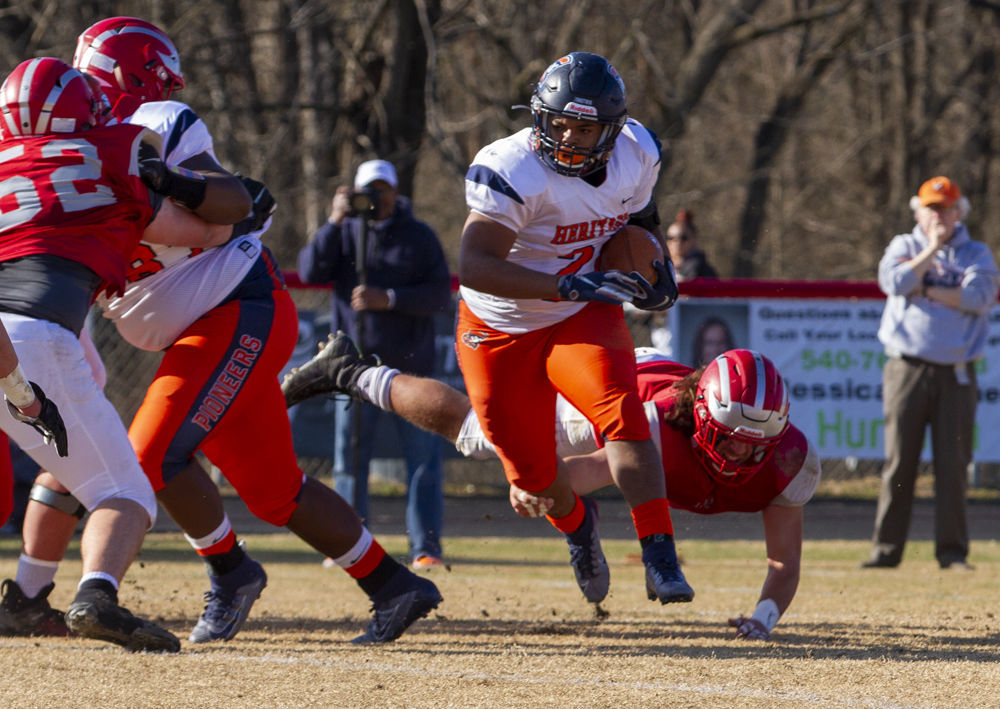 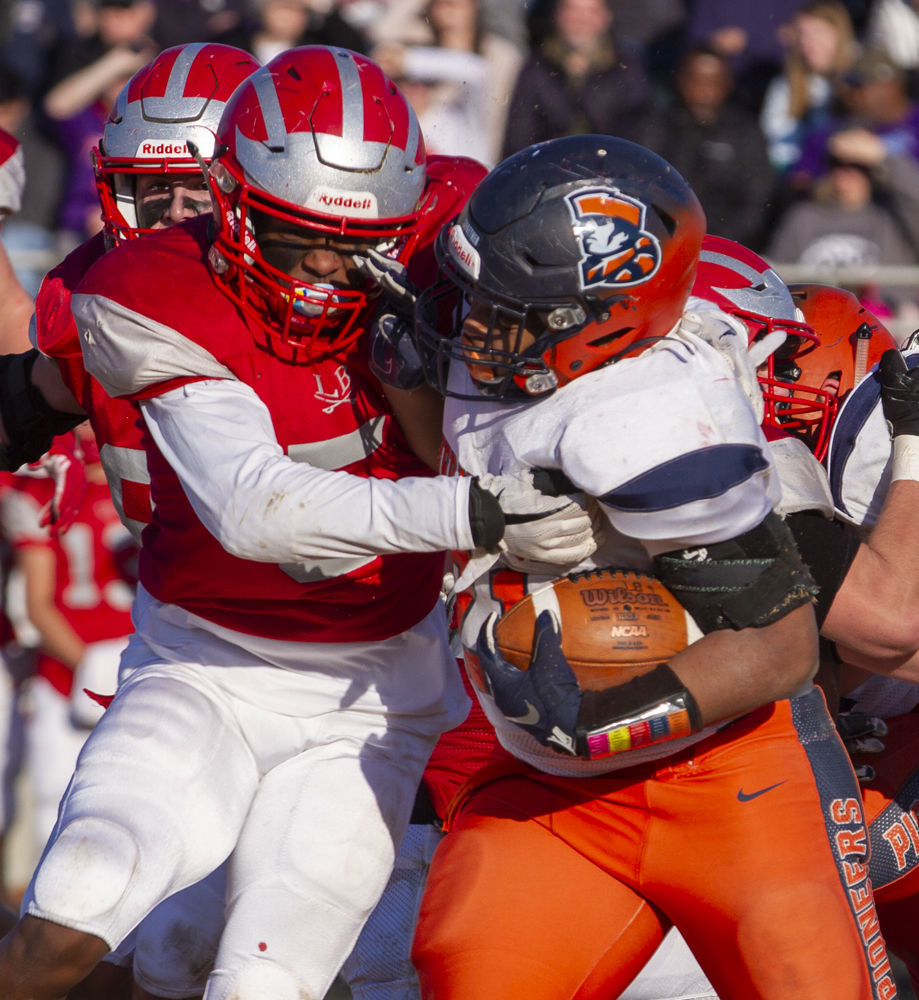 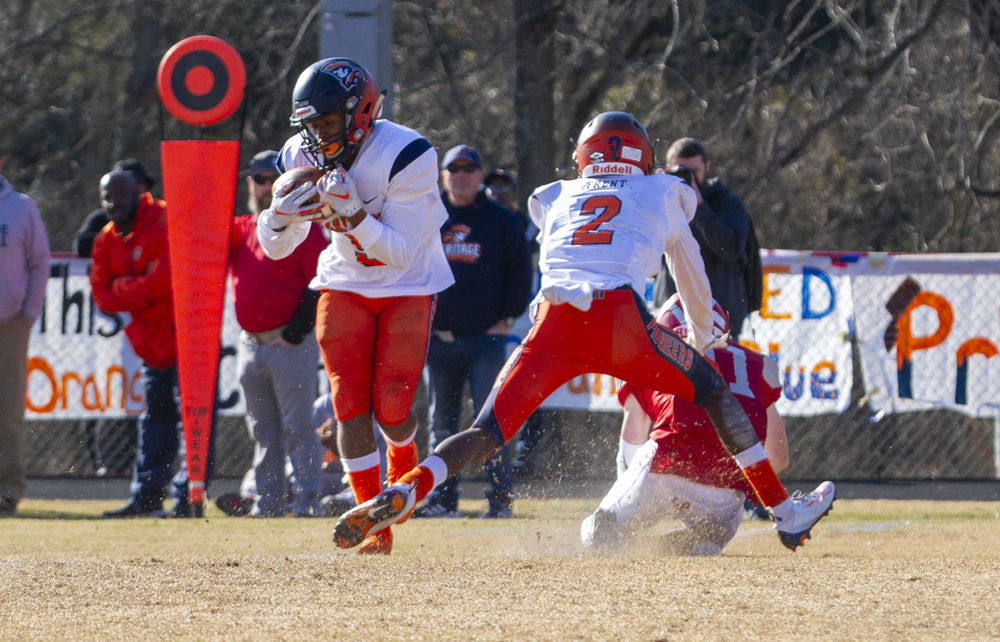 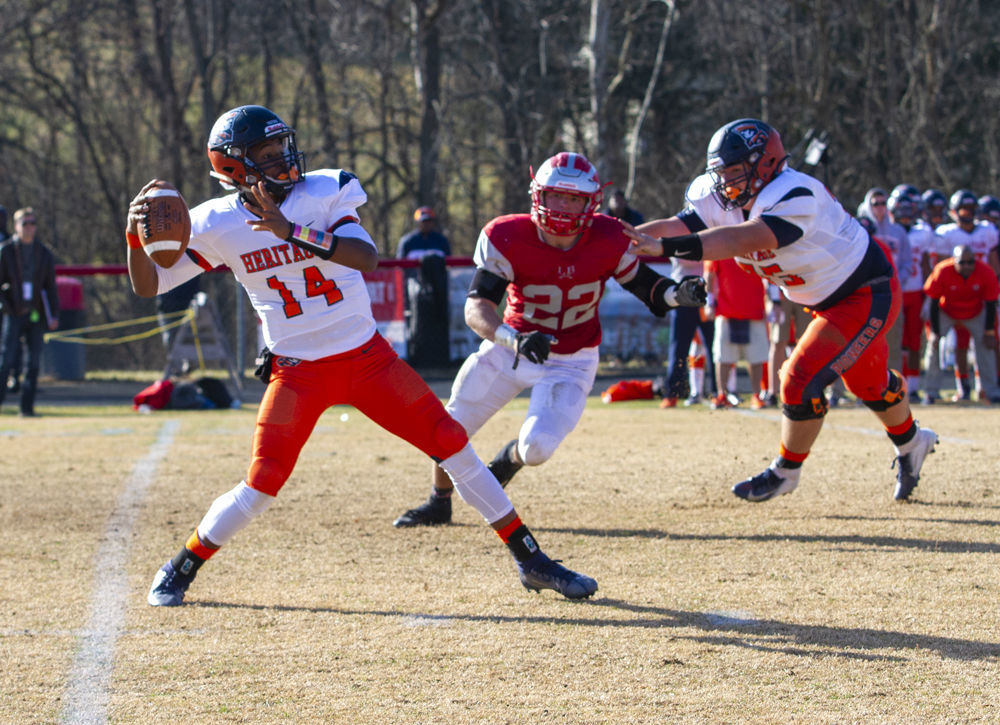 Heritage's (14) Kameron Burns loads up a pass as teammate (55) Mike Williams tries to block Lord Botetourt's (22) Ethan Clower. The pass is completed for a long touchdown. 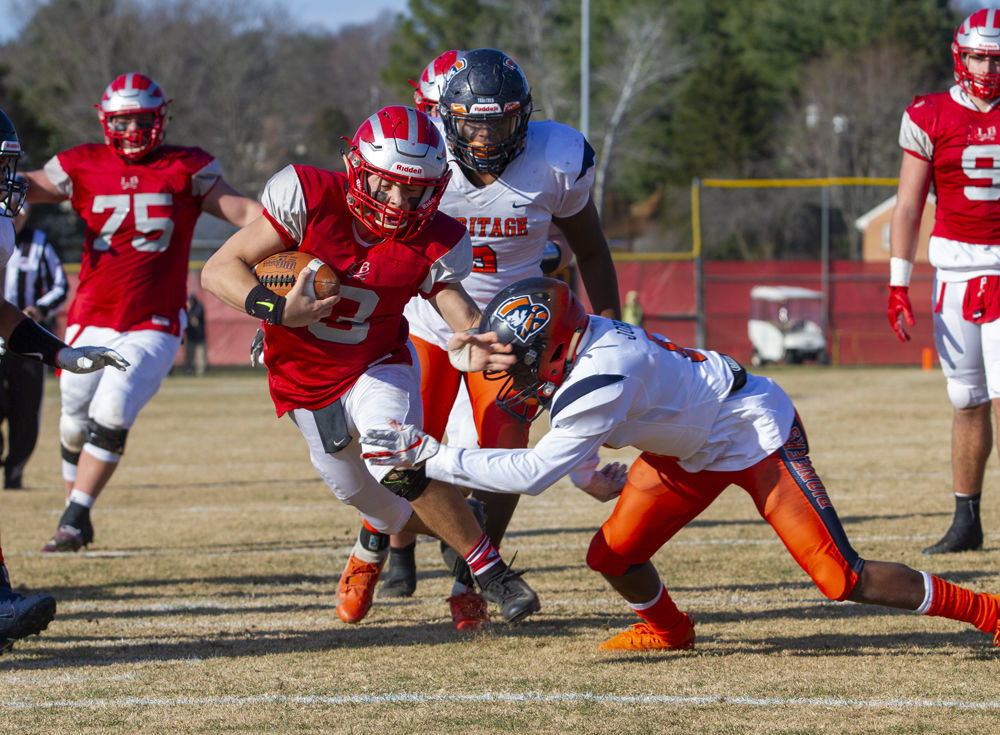 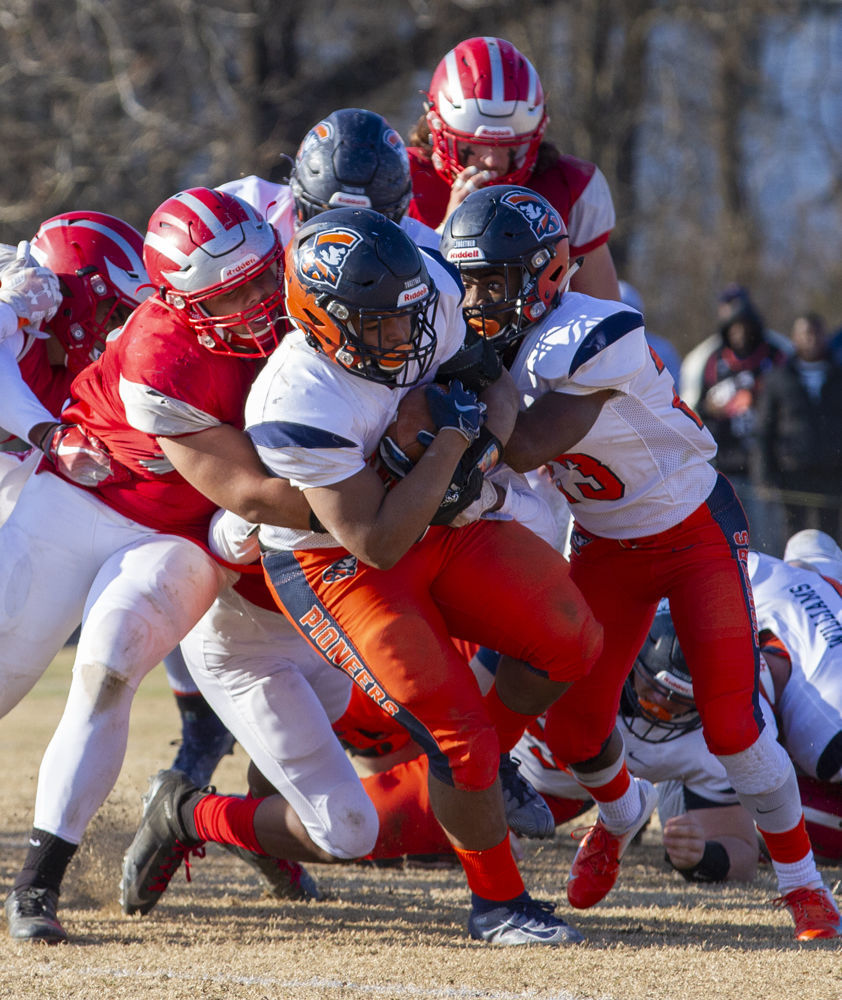 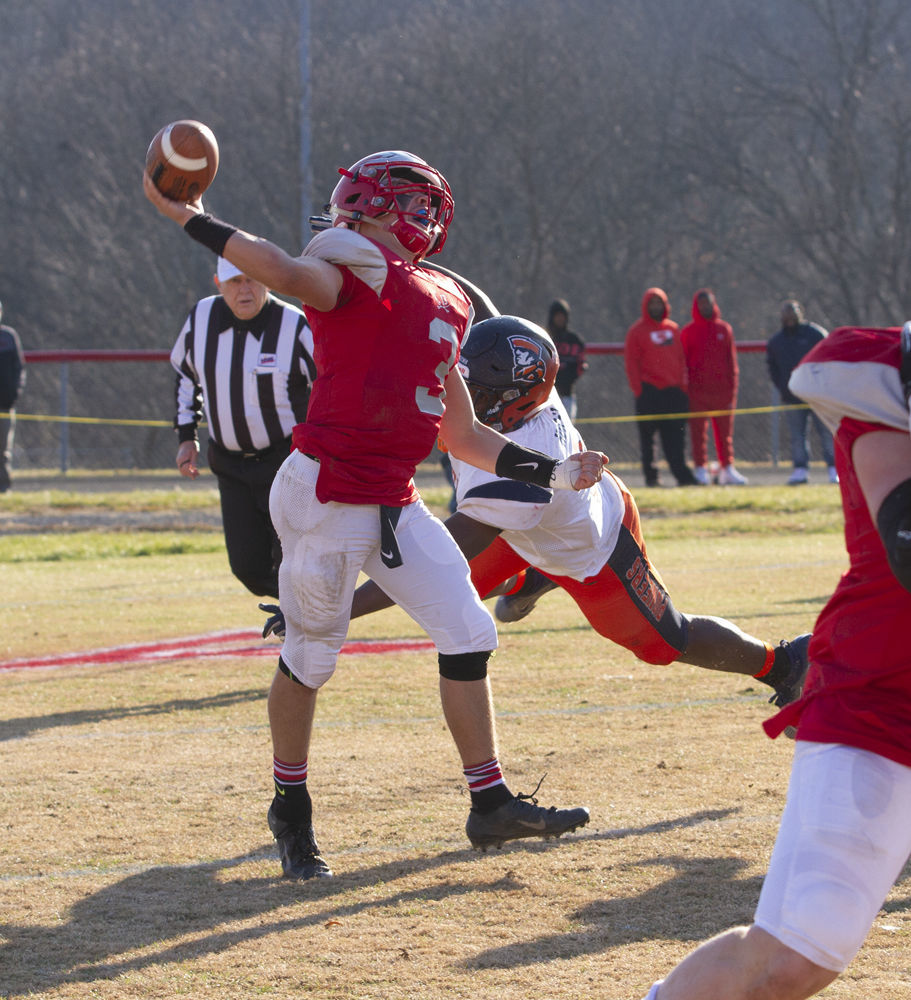 Heritage's (14) Kameron Burns loads up a pass as teammate (55) Mike Williams tries to block Lord Botetourt's (22) Ethan Clower. The pass is completed for a long touchdown.

DALEVILLE — Lord Botetourt got its revenge.

After getting knocked out of last year’s playoffs by Heritage in the Class 3 state semifinals in Lynchburg, the Cavaliers returned the favor Saturday, ending the Pioneers’ season with a 25-14 victory in the state semifinal round.

And nobody was happier about the turnaround than LB running back Hunter Rice.

The junior rushed for 160 yards on 41 carries and scored a third-quarter touchdown that effectively sealed the game, giving Botetourt some breathing room after Heritage had clawed back to trail by four, 18-14, just before halftime.

For Rice, the day was about redemption.

“It feels great. Last year, seeing them go on to states and then hoisting that trophy,” he said, and then paused. “This feels great.”

Botetourt will play in the Class 3 championship on Dec. 14 against Hopewell at Liberty University’s Williams Stadium. It’s the same site of Heritage’s title celebration last year, and the place the Pioneers desperately wanted to play again.

But it wasn’t to be.

Running back KJ Vaughan rumbled for 123 yards, but his 9-yard touchdown run with Heritage trailing 18-14 midway through the third quarter was called back because of a holding penalty.

The miscue pushed the Pioneers (12-2) back 10 yards and ultimately failed when Rice intercepted Kameron Burns’ pass at the 5-yard line.

Had Heritage scored on that drive, it could have taken a 21-18 lead. Instead, Botetourt (14-0) scored six minutes later off Rice’s 1-yard plunge.

“I felt like that really changed momentum,” Heritage coach Brad Bradley said of the penalty. “They got a drive going after that and ended up scoring, and that kind of took the wind out of our sails.”

LB held Heritage to 199 yards of total offense and pitched a shutout in the second half.

“Give credit to Botetourt,” Bradley said. “They’ve got a great football team. We just didn’t make some plays and they made some plays.”

Quarterback James-Ryan Salvi scored two touchdowns for LB, first on a 27-yard interception return with seven seconds left in the first quarter and then with 1 minute remaining before halftime, on an 8-yard run.

His first score gave LB a 9-0 lead. On the extra-point attempt, kicker Terran Baker had to scramble because of a bad snap and found Kyle Arnholt in the end zone for the two-point conversion that gave the Cavaliers an 11-0 lead. Baker also opened the scoring with a 27-yard field goal on LB’s first drive.

Heritage got on the board in the second quarter when Burns hit Kyron Thomas with a 71-yard touchdown bomb. After Salvi scored his second touchdown, Pioneers senior Brian Trent blazed away for a 79-yard kickoff return that narrowed the deficit to 18-14.

But Heritage was forced into numerous three-and-outs on the day. And Botetourt punter Mikey Rago made sure to put the Pioneers deep in their own territory with massive punts in the second half.

“We just left it all on the field,” Heritage senior outside linebacker Spencer Goolsby said. “We just couldn’t get it done.”

Burns threw for 88 yards but completed just 5 of 17 passes. Heritage was forced to throw more often than normal in the scoreless fourth quarter, but Burns couldn’t connect with his receivers for big gains late.

“That’s not who we are,” said Bradley, whose team has tore up the turf with the run game this season. “I give credit to my seniors, give credit to my team. We battled to the end. [Rice] is really good. But they made some plays that we didn’t make.”

Thomas finished with three catches for 77 yards for Heritage.

“Lord Botetourt was everybody’s whipping post for so long. … We had a talk about people feeling disrespected,” he said. “Maybe finally we can get a little bit of respect.”

Rice talked about how his team ran the ball. The junior took all but five of his team’s totes Saturday.

“They said in an interview before, they said that Lynchburg football was more physical than Roanoke football,” Rice said. “And I think we proved that that’s not true.”