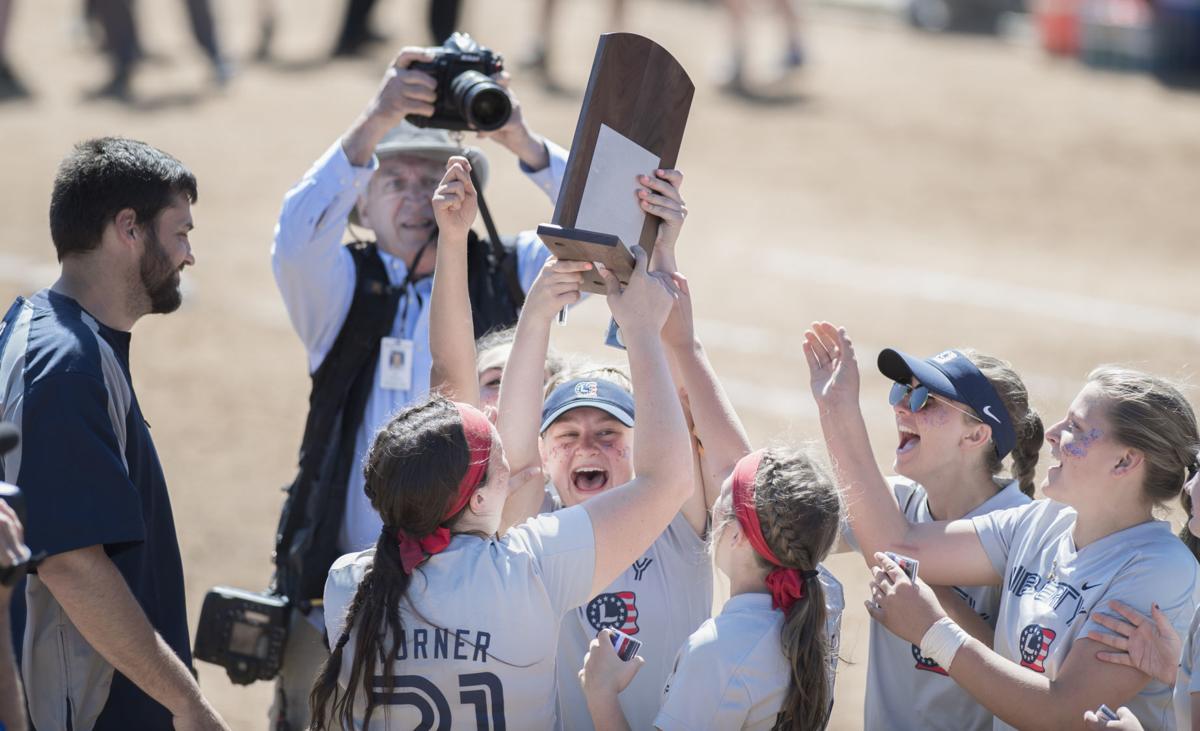 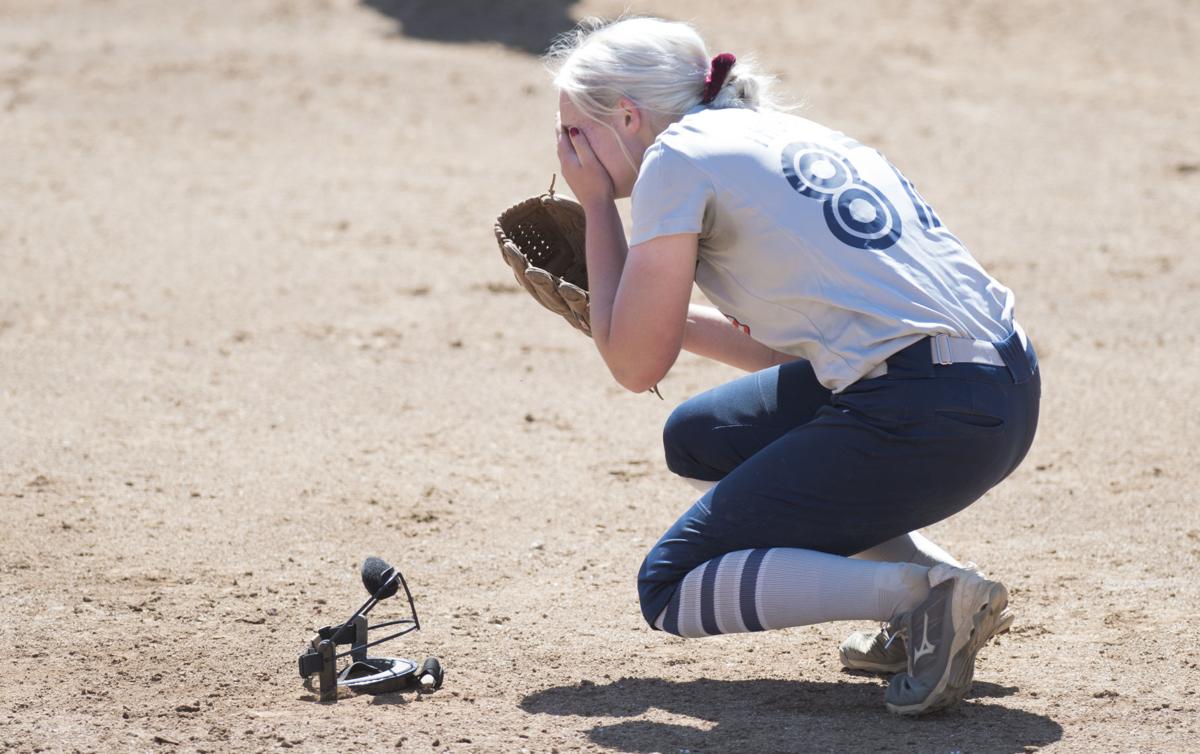 Liberty pitcher Millie Thompson falls to her knees after the last out that gave her team a 4-1 state title victory over Turner Ashby.(Photo by Lee Luther Jr.) 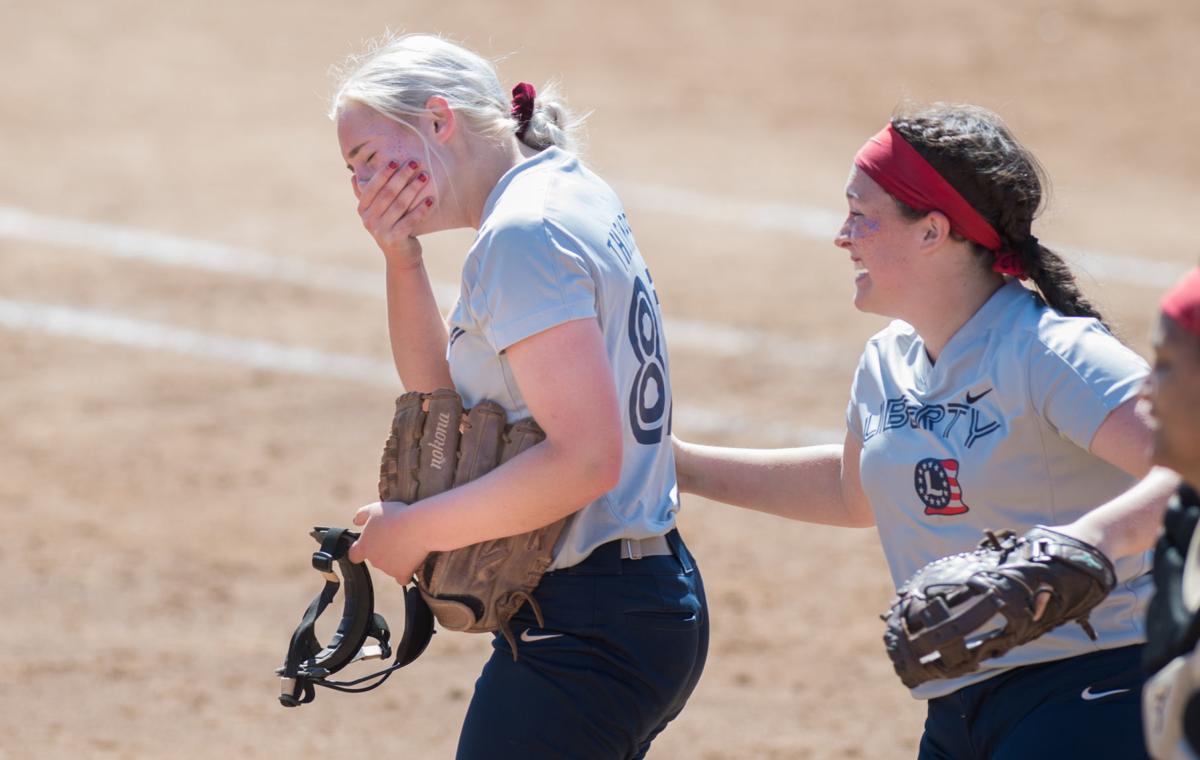 After the final out Liberty pitcher Millie Thompson lets the tears flow as her team just won the state championship,4-1 over Turner Ashby.(Photo by Lee Luther Jr.) 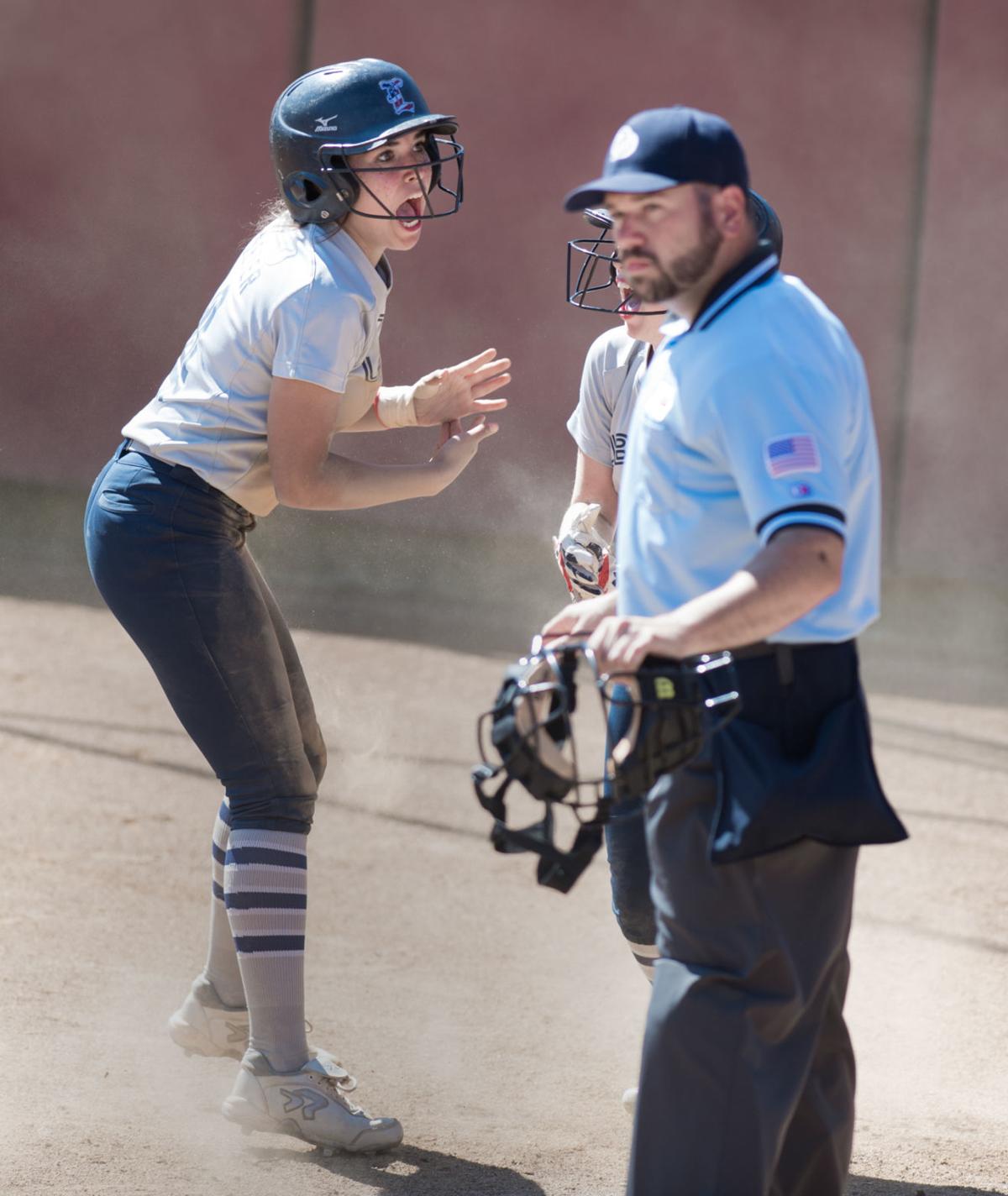 Sydney Carter reacts to scoring a run for Liberty during Friday's state title game in Salem.(Photo by Lee Luther Jr.0 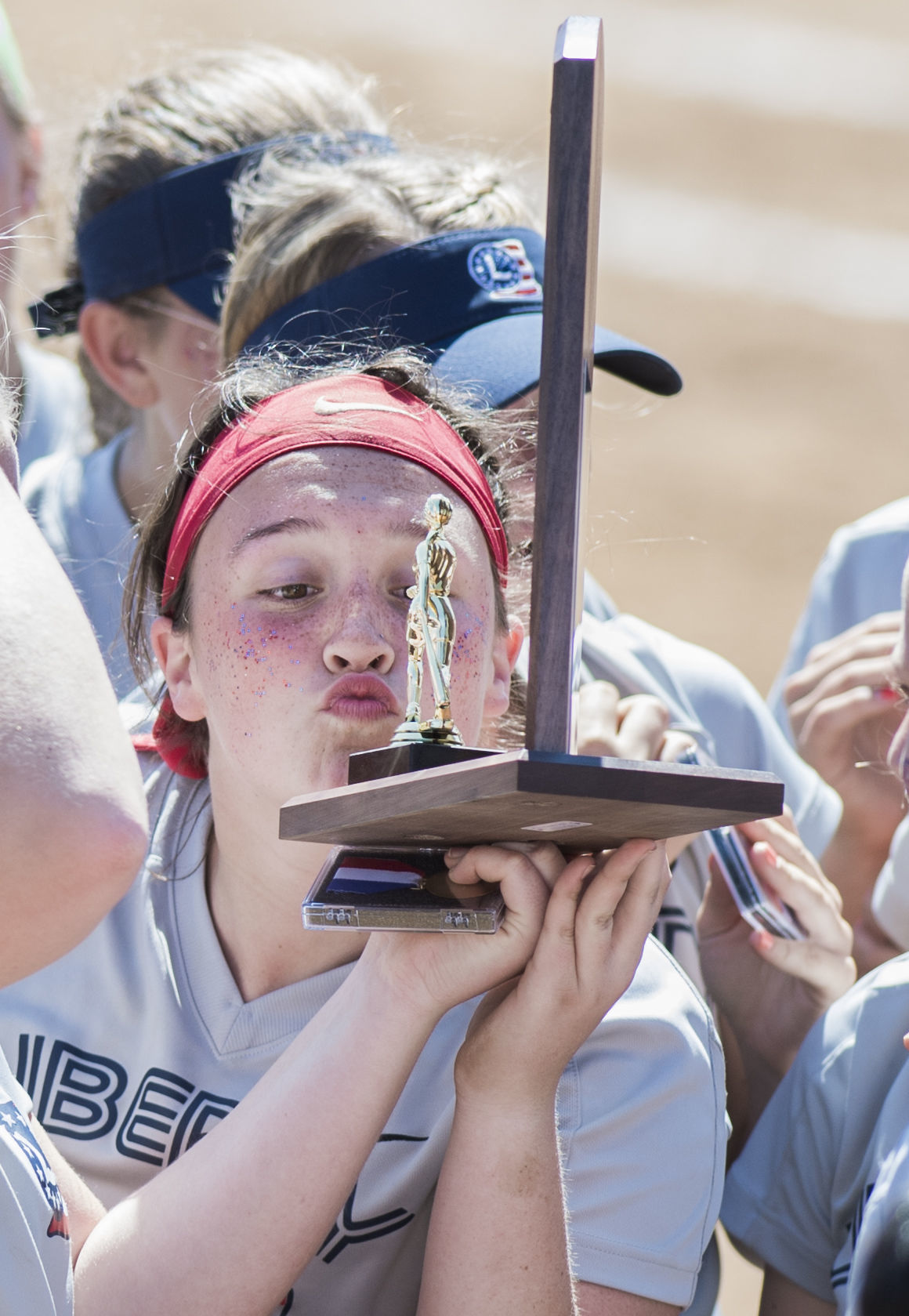 Liberty pitcher Millie Thompson falls to her knees after the last out that gave her team a 4-1 state title victory over Turner Ashby.(Photo by Lee Luther Jr.)

After the final out Liberty pitcher Millie Thompson lets the tears flow as her team just won the state championship,4-1 over Turner Ashby.(Photo by Lee Luther Jr.)

Sydney Carter reacts to scoring a run for Liberty during Friday's state title game in Salem.(Photo by Lee Luther Jr.0

SALEM — Millie Thompson faced the biggest three outs of her career. She’d been in important games before, of course, but no other play had carried so much weight.

On Friday, the left-hander took the circle for the last inning of her junior campaign with a state championship hanging in the balance.

But Thompson wasn’t concerned about her ability to get the job done for her Liberty softball team.

“I just felt really confident about it,” the Minettes’ ace said.

She focused, instead, on staying calm. So she held back tears for each of the 13 pitches she delivered in the inning — and then couldn’t keep them in any more.

Thompson crumpled to the ground and let the emotions take over, let it sink in she and the Minettes defeated Turner Ashby, 4-1, and captured the Class 3 state title.

“It is the highlight of my career so far,” Thompson said. “For sure.”

In the wake of a litany of early mistakes, the Minettes’ resilience on the defensive end — along with timely hitting and another stellar performance from Thompson — paid dividends in the form of the first state softball championship in school history.

“It’s something that we’ve all been wanting to do for years now,” Liberty senior third baseman Kacey Whorley said, “and to finally do it, it just feels so good. … The moment you realize you made something happen you thought you never could, we’re living a dream.”

For the first few innings of Friday’s contest at Moyer Complex, though, it looked like Liberty might have to wait at least one more year to capture the elusive state championship.

A pair of errors gave Turner Ashby a 1-0 lead in the first inning, and the Minettes couldn’t get anything going at the plate for 3 1/2 frames, putting just one runner on on Whorley’s single in the first.

Things began to change, however, in the fourth inning.

“We have a big-stage team. We have a bunch of girls that, instead of choking under pressure, we absorb it,” Whorley said. “… The girls that we have are used to being in this situation, having to make something happen.”

Whorley broke through for her second hit of the day to lead off the frame, sending the ball through the middle once again. Although Whorley was erased as Gracie Dooley grounded into a fielder’s choice, the Minettes still cashed in.

Dooley evened the score at 1-1 when Paige Naples put the ball in play with two outs. Naples adjusted against Turner Ashby pitcher Makayla Cyzick to jumpstart the Minettes’ offense, taking the advice of her coach, Mike Thompson, to be aggressive on the first pitch.

“She wanted to go inner-half on that first pitch, get that first strike across and then back us up a little bit and working us away and working us rise ball,” Thompson said of Cyzick. “I just told them we’re gonna have to push the pace of play a little bit, go after those first pitches, look for something inner-half, and if it’s there, drive it, and if it’s not, let it go.”

Naples sent the ball to left to give Dooley a chance to cross home, but left fielder Kaylin Howard sent a rocket to catcher Carley Davis at the plate to prevent a second run and help Turner Ashby escape the inning.

The run was the first of four unanswered for the Minettes.

Liberty tacked on two runs in the fifth, as Whorley (3 for 3) provided the go-ahead run on her single through the middle and as Turner Ashby committed an error.

Whorley had half of Liberty’s hits, reversing her 0-for-3 in the semifinals after spending Thursday night in the batting cage back in Bedford.

Kinnice Turner, who went 2 for 3, brought the score to 4-1 on an RBI double in the sixth.

“I’ve just been so confident in the past when I’ve played against them,” said Turner, who had a walkoff single against TA last season in the Region 3C championship and a three-run double against the Knights in this year’s region title game, “so I just kept that same composure, and I just stayed in for them, did it for [my teammates].”

Thompson, meanwhile, shut down Turner Ashby from the circle. The southpaw, who didn’t give up an earned run, stranded a Knights runner in the third and fourth innings after Liberty committed an error in each frame and didn’t allow a hit until the sixth inning.

“She just took the things that she did well last game and did the same thing today so we couldn’t hit her,” Cyzick said of Thompson. “She knew where to pitch us. She’s a really good pitcher.”

Both of the hits Thompson gave up came in the sixth inning, the first a leadoff single by Davis and the second a single from Cyzick that came screaming back to the circle and hit Thompson on the ankle.

Thompson, who had four strikeouts, retired the next three batters to end the threat.

“It hurt like hell,” Thompson said of the bruising liner, “but I’m not coming out in this situation. Broken leg or not, this is what I wanted to do. You’ve just gotta hunker down and do your job, and we did.”

The victory Friday capped an undefeated postseason run for the Minettes. and to come away with a state championship, after suffering three straight losses to end the regular season (six close defeats overall), made the win that much sweeter.

“We had a lot of losses early in the season that we shouldn’t have had,” Whorley said. “But we came back from those late in the season. and look at us now.”