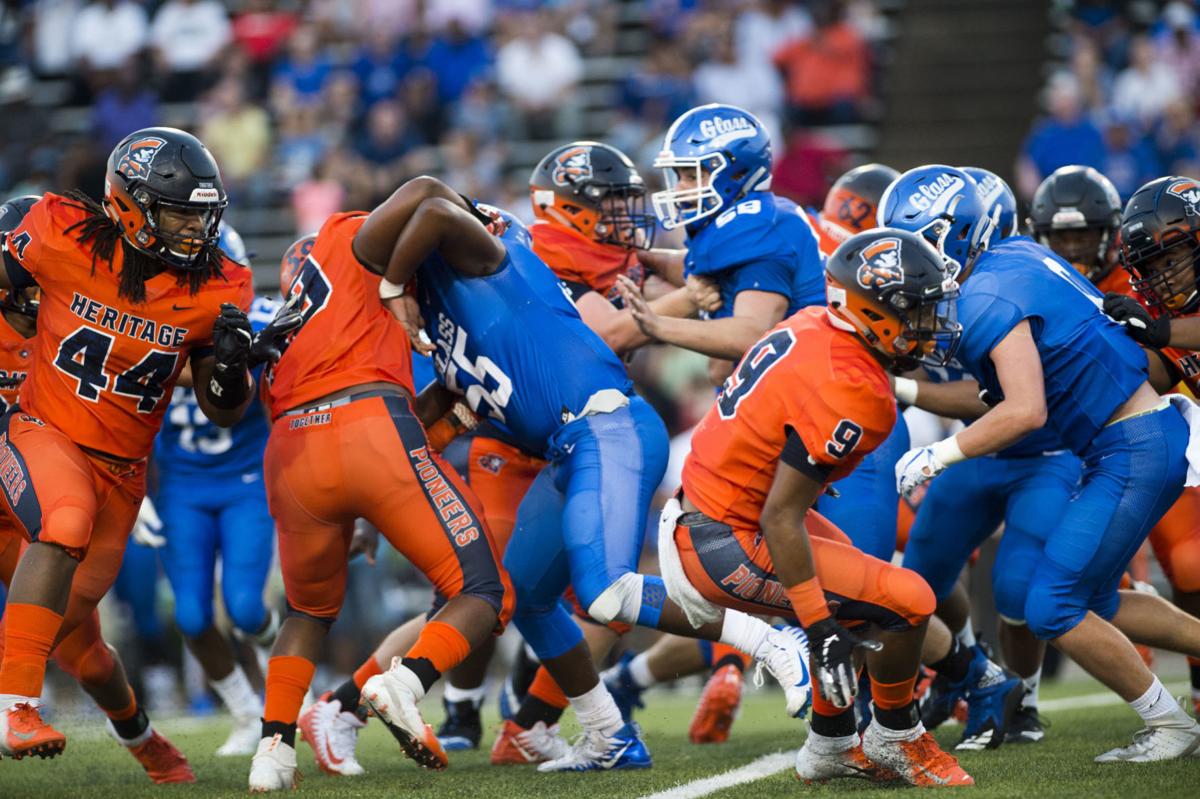 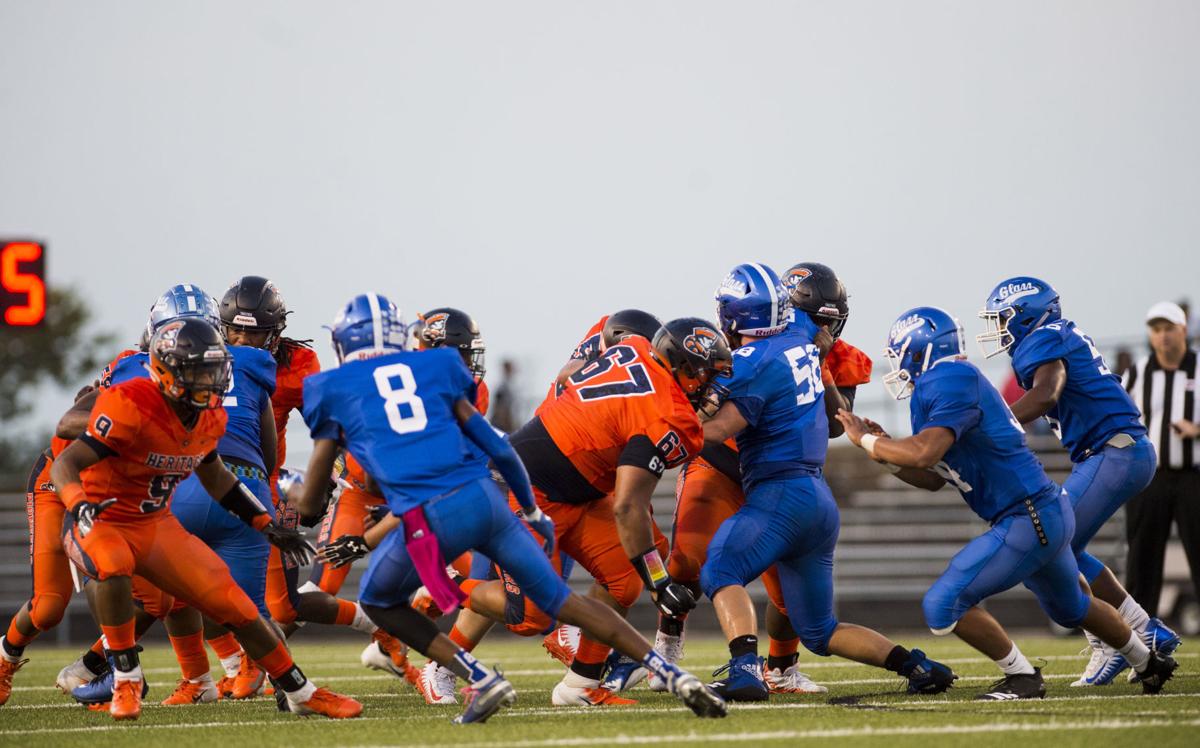 EC Glass and Heritage High School players battle for the ball in the Jug Bowl on September 21, 2018. (Photo by Taylor Irby/The News & Advance)

EC Glass and Heritage High School players battle for the ball in the Jug Bowl on September 21, 2018. (Photo by Taylor Irby/The News & Advance)

Krystian Rivera, Heritage’s fierce linebacker and running back, burst past the E.C. Glass defense for the game-deciding touchdown in the 2018 Jug Bowl. Then, with his team clinging to a three-point lead in the final seconds, Rivera and teammate Trae’Sean Hall dropped Glass quarterback DreSean Kendrick to end the game.

That was more than a year ago, yes, but the memories are still fresh.

“We need that intensity we had, but we want to come out and give more than what we gave last year,” Rivera, now a senior, said Thursday as both teams practiced on their respective sides of town.

As the Hilltoppers walked through schemes roughly 4 miles away in midtown, Kendrick said he won’t forget last year’s game, either.

“It fuels me, because I feel like I could have [done] more,” said the senior QB, who scored twice and rushed for 91 yards in last year’s game, but failed to complete any of his nine passes. “And I know we all feel like that. They were more physical than us last year. We really took that to heart.

“We’ve been working all season, and this is the one we’ve been waiting for.”

Yes, everyone has been waiting for this one.

E.C. Glass (8-0) hosts Heritage (7-1) in a battle for Seminole District supremacy at City Stadium tonight. A capacity crowd is expected. Kickoff is at 7 p.m.

On the eve of the most consequential game between the two city schools in decades, players talked about what they need to do to win, about staying focused and about how they want to bring intensity to the field to live up to expectations.

“We have to have more heart than they do,” Heritage running back KJ Vaughan noted. “We know we can win the Seminole District with this game and keep the jug here. I know we really wanna keep that jug here.”

Glass, of course, wants it back. And perhaps no one wants it to change hands more than Jadan Merriman, the Hilltoppers defensive end and tight end who sprained his ankle on the third play of last year’s game, then sat out the rest of the contest.

“I feel like I need to make up for last year,” Merriman said. “I have an extra little push in me.”

His teammate, Glass lineman BJ Wheat, who stands at 6-foot-4 and weighs 305 pounds, will play in his fourth Glass vs. Heritage game. Wheat has never missed a game in his career, playing in more than 40 in all. He’s set to surpass what coach Jeff Woody thinks may be the school record, 44 games played, a stat owned by Bam Kittrell, who was a senior last season.

“Probably the most important,” Wheat said when asked how tonight’s game stacks up against some of the biggest games of his career. He said Glass wants to keep its perfect record unblemished, then added: “[This game] it’s something to brag about for the rest of my life.”

Glass’ defense enters allowing just 9.7 points per game, a figure that’s deceiving, since a lot of points given up have occurred after Woody has taken his starters out in the fourth quarter.

The Hilltoppers offense is producing 49.1 points per game.

The numbers are impressive for Heritage, too: 17.7 points allowed per game and 42.1 points scored per game.

All that makes tonight’s game hard to pin down. Both offenses are high-powered, yes, but the defenses are the lockdown kind. Last year, defense defined the night in a 25-22 final, just like it did in 2017 when Glass ended Heritage’s eight-game winning streak in the series with a 14-12 victory.

“I want a nice defensive battle on both sides,” Wheat said. “Both [teams] talk about their defenses, so I wanna see who’s defense is the best.”

Back at Heritage, middle linebacker JJ Morris was busy preparing for his first Jug Bowl game. The transfer from Georgia’s Woodstock High — which competes in 7A, the state’s largest classification — has been involved in some big games in his career.

“But I’m really excited for this one,” Morris, a junior, said. “I know it’s gonna be high energy, high expectations on both sides of the ball. … I’m just happy to compete in a game like this.”

Vaughan, a senior, knows the rivalry well. He was a difference-maker last year, scoring once and leading the way with 99 rushing yards.

“The intensity,” he said, “I know it’s gonna be up there between both teams.”

Full of storylines: Things to watch as Heritage and E.C. Glass prepare for 'war'

Playoff points are on the line. So are bragging rights, the little brown jug and, most likely, the Seminole District title. Long-held records …