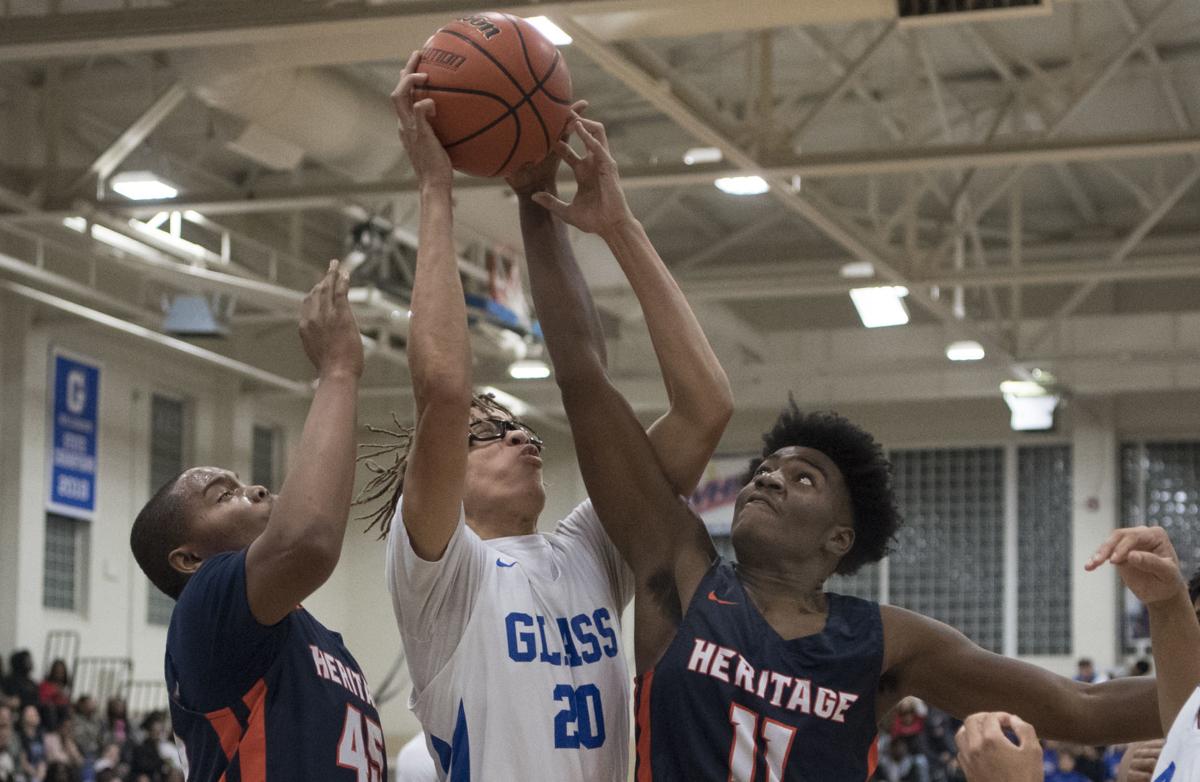 Heritage's Calvin Johnson (right) and Jacob Lambert (left) go up to block a shot attempt by E.C. Glass' Brian Hunt Jr. during a Heritage-Glass game at McCue Gymnasium in January. 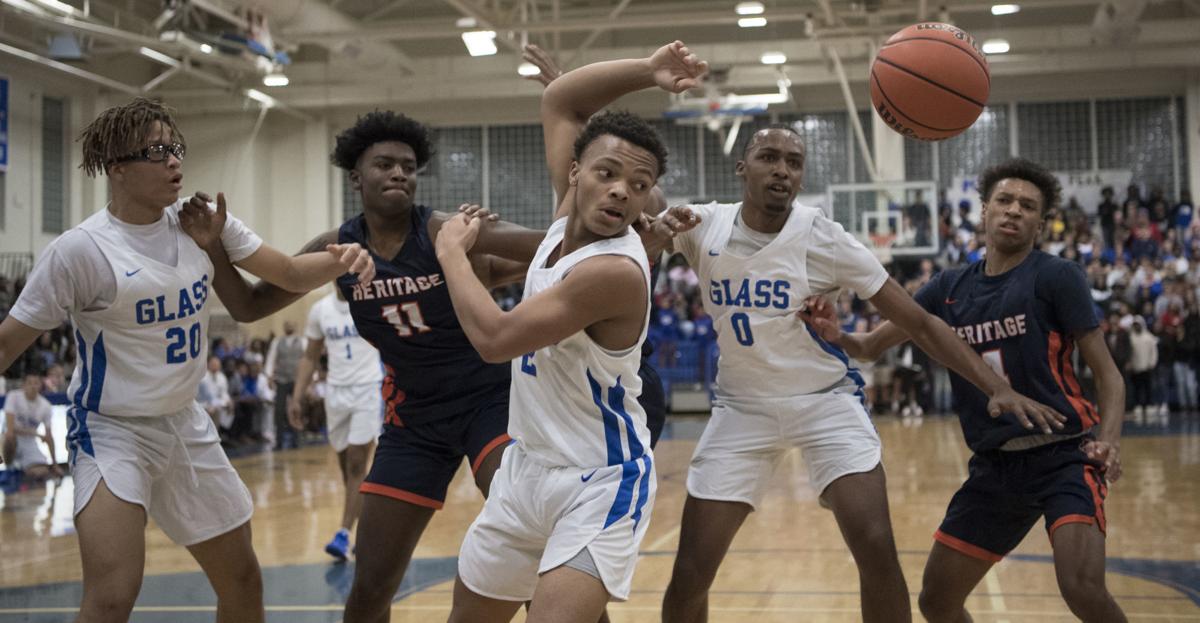 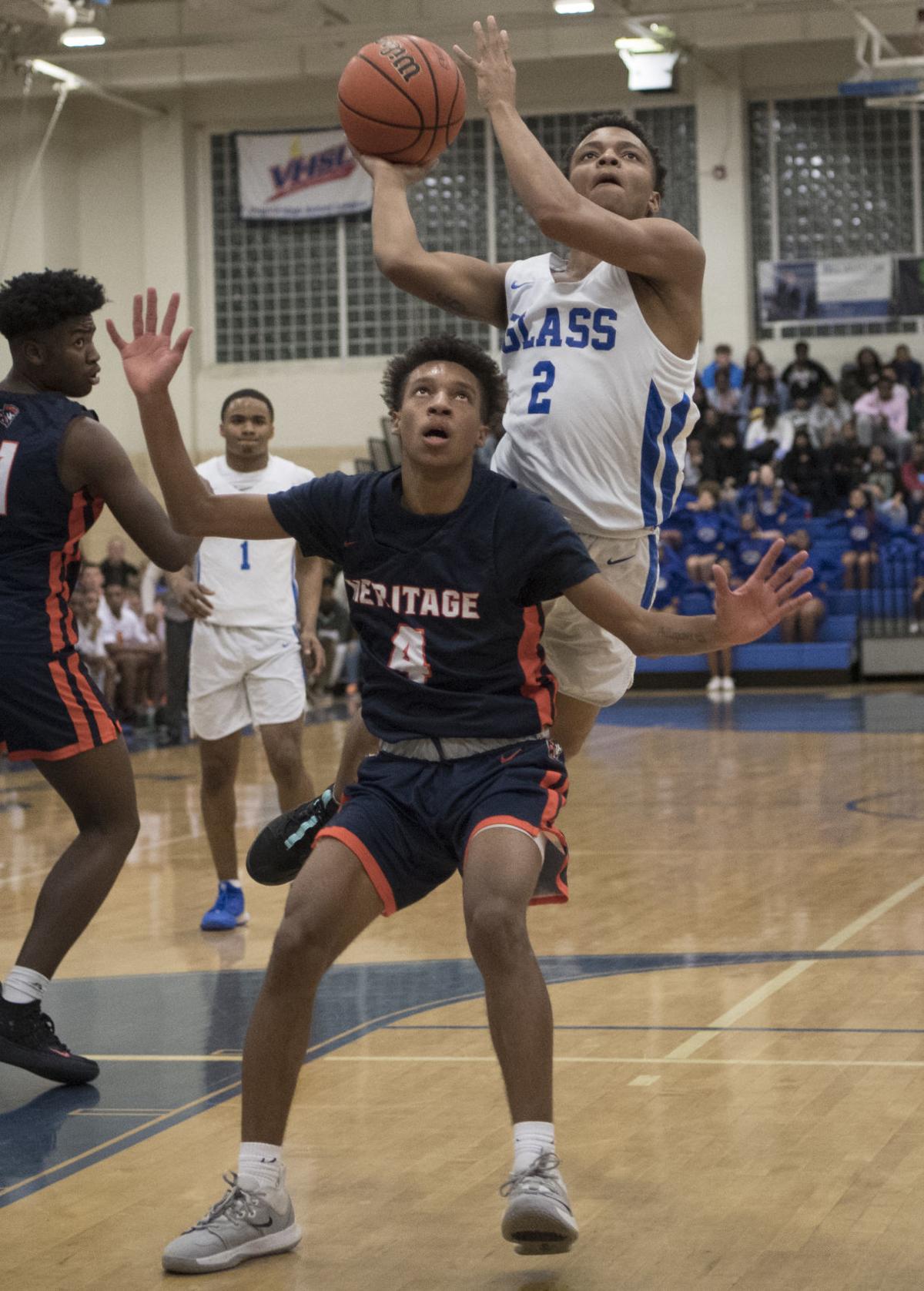 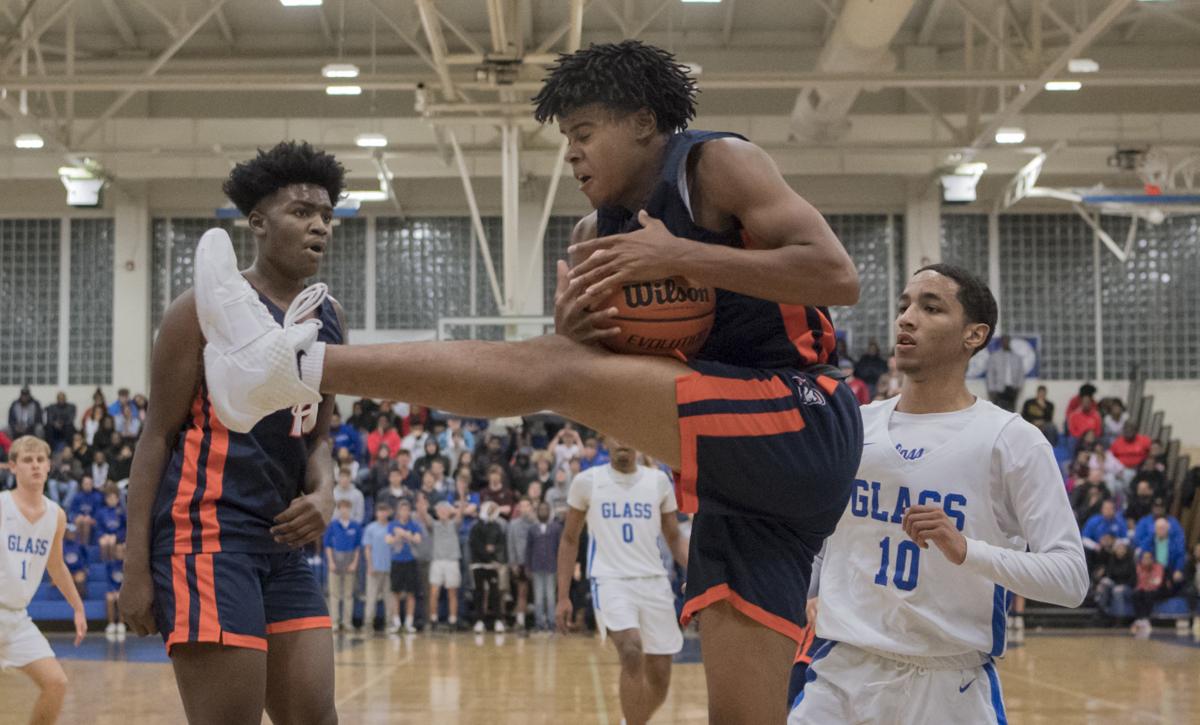 Heritage's Brandon Tweedy secures a rebound in front of E.C. Glass' Jovan Quinones during a January 2020 game at McCue Gymnasium.

Heritage's Calvin Johnson (right) and Jacob Lambert (left) go up to block a shot attempt by E.C. Glass' Brian Hunt Jr. during a Heritage-Glass game at McCue Gymnasium in January.

Heritage's Brandon Tweedy secures a rebound in front of E.C. Glass' Jovan Quinones during a January 2020 game at McCue Gymnasium.

No motivation necessary. Just the idea of Heritage and E.C. Glass playing under the gym lights in the winter is enough to get players’ blood flowing.

After last month’s low-scoring clash, it’s time for Round 2 between the Pioneers and Hilltoppers, the final regular-season meeting between the foes. And this one has plenty of implications.

But first, Glass and Heritage have to get past tonight’s district matchups.

That’s what life is like in the Seminole District these days: You can never look too far ahead to another opponent. Life in the eight-member league this year represents a stressful, never-take-a-night off gauntlet, with critical games often taking place within days of each other. And then there are the cellar-dwellers, who come out of nowhere for the upset.

No, you can’t overlook anybody, even though the Seminole standings in 2019-2020 are separated into two tiers, with little in between.

There’s the top half: Heritage and Liberty Christian tied for first place with 8-2 district records, Glass and Jefferson Forest knotted in second place one game behind at 7-3.

And there’s the bottom half: Brookville and Liberty tied for sixth with 2-8 district records and Rustburg alone in last at 1-9.

In between it all there’s Amherst, alone in the middle with its 5-5 district record.

The Lancers head to E.C. Glass tonight for a 7 p.m. matchup. It’s just the sort of game to beware of, because the Lancers could catch the Hilltoppers napping while Glass wants to take care of business before preparing for Heritage.

Amherst (9-6 overall) still is trying to find the consistency necessary for a lengthy run in the playoffs, which begin with region play in three weeks. The Lancers also are trying to squeak into the district’s top four spots to become eligible for a slimmed-down version of the district tournament, which only features the top four teams this season. To do that, ACHS will bank on its defense, which is holding opponents to under 60 points per game.

“We do give up some offensive boards to teams that are bigger than us, but we’re sticking to our defensive principles,” Amherst coach Segar Jordan said. “This is one of the better defensive teams I’ve had. We’re playing man, but I think the guys have bought into taking pride in getting stops.”

Still, Amherst will need to be sound offensively tonight.

“That’s goal No. 1 for as long as I’ve been here,” Jordan added. “You’re going to turn the ball over [against Glass’ press], but you can’t do it in the back court. If you’re gonna turn it over, do it 80 feet away from their basket.”

The Hilltoppers (11-6 overall) keep a white board within view in their locker room that points out things they need to do to win games. It helps players focus on themselves rather than worrying about their opponents.

But it’s hard to look past Amherst, because the Lancers reside in the same region as Glass (there’s a chance the two teams could meet in a do-or-die situation late next month in Region 4D). Both teams obviously want to win tonight to move up in the region standings and try their hand at postseason home games.

“So for us, that’s a bit of a statement game,” Best said. “Who wants it more? Who’s gonna go on the road and who gets to host a home game in the region? So that one’s got a lot of implications. Then we’ve got to turn our focus to Heritage.”

And getting revenge on the Pioneers (9-7 overall) is definitely a priority. HHS held Glass to eight first-half points last month in a game that ended with a 40-36 score, the lowest final in the rivalry in more than a decade, according to available records.

Things may be a little different Monday, when Glass and Heritage square off at 7 p.m. inside the Heritage field house. Glass is without senior guard/forward Reashawn Spaulding, out for the season with a broken wrist. But the ‘Toppers recently returned point guard Rayvon Graham, who was injured most of the season, and forward Brian Hunt, sidelined in recent games because of the flu.

Pioneers leading scorer Jacobi Lambert (16.3 ppg) is back after missing three games with an injury, and HHS also recently brought back 6-foot-2 sophomore Keshawn Hubbard, whom coach Les Camm said stepped away from the team earlier this season and recently rejoined.

“He’s raw but he’s very athletic,” Camm said of Hubbard, whose wingspan gives HHS a strong paint presence, “and we told him the other night he’s been playing like a monster on the boards.”

The Pioneers face a brutal four-game stretch to close the regular-season: JF tonight, Glass on Monday, LCA next Friday and JF on Feb. 10. JF defeated Heritage twice in the regular season last year, so the Pioneers want revenge.

“With high school kids, it’s minute by minute with the highs and the lows,” Camm said. “That’s what we’re talking about right now preparing for [JF].”

Plenty could happen to shake things up tonight. With a win against Liberty, Liberty Christian (13-5 overall) could take over first place outright, should JF defeat Heritage. A Heritage win and an LCA loss would give the Pioneers first place outright. Or Glass could defeat Amherst and Heritage could lose, meaning the two rivals would be in a three-way tie with JF heading into Monday’s showdown.

“If we can do our job and make our run now,” Best said of his Hilltoppers, “there’s no better time to get hot than right now.”