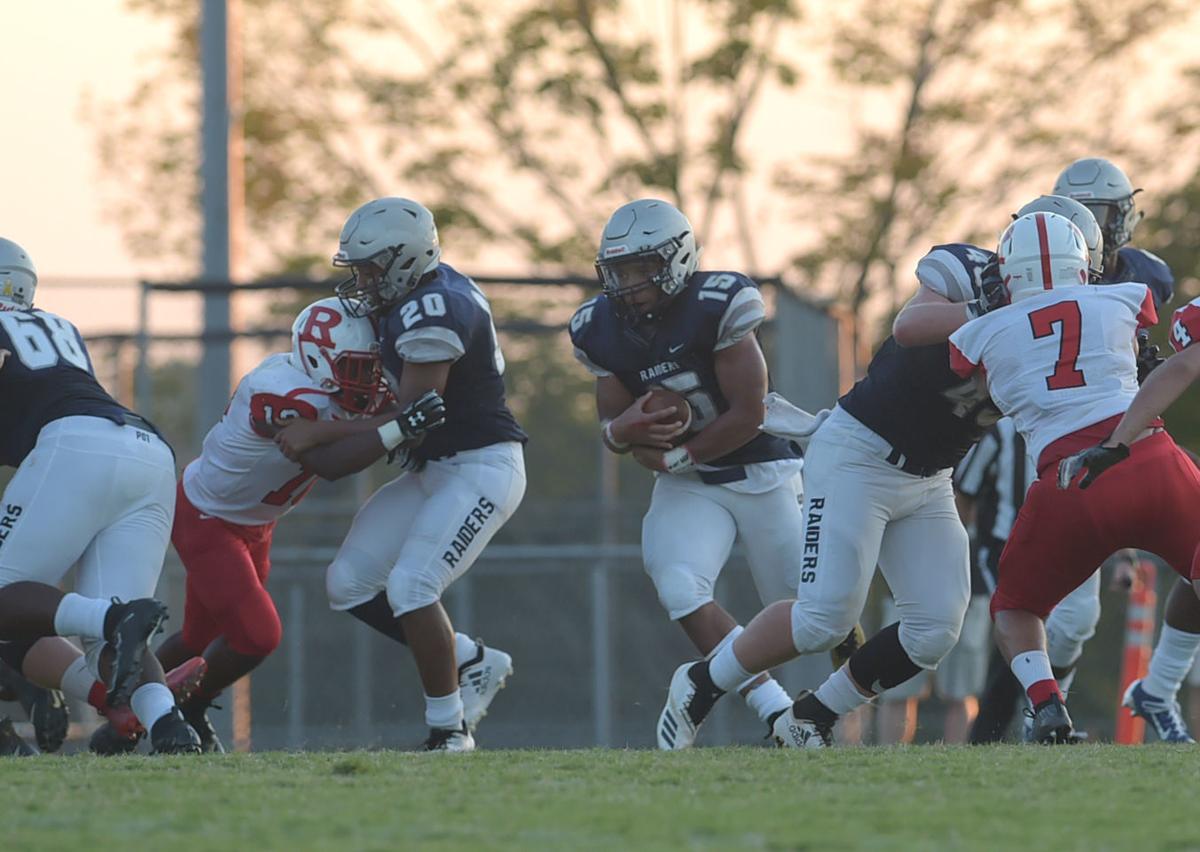 Appomattox running back Cristian Ferguson carries the ball during the Raiders' win over Rustburg at Appomattox County High School on Sept. 6, 2019. 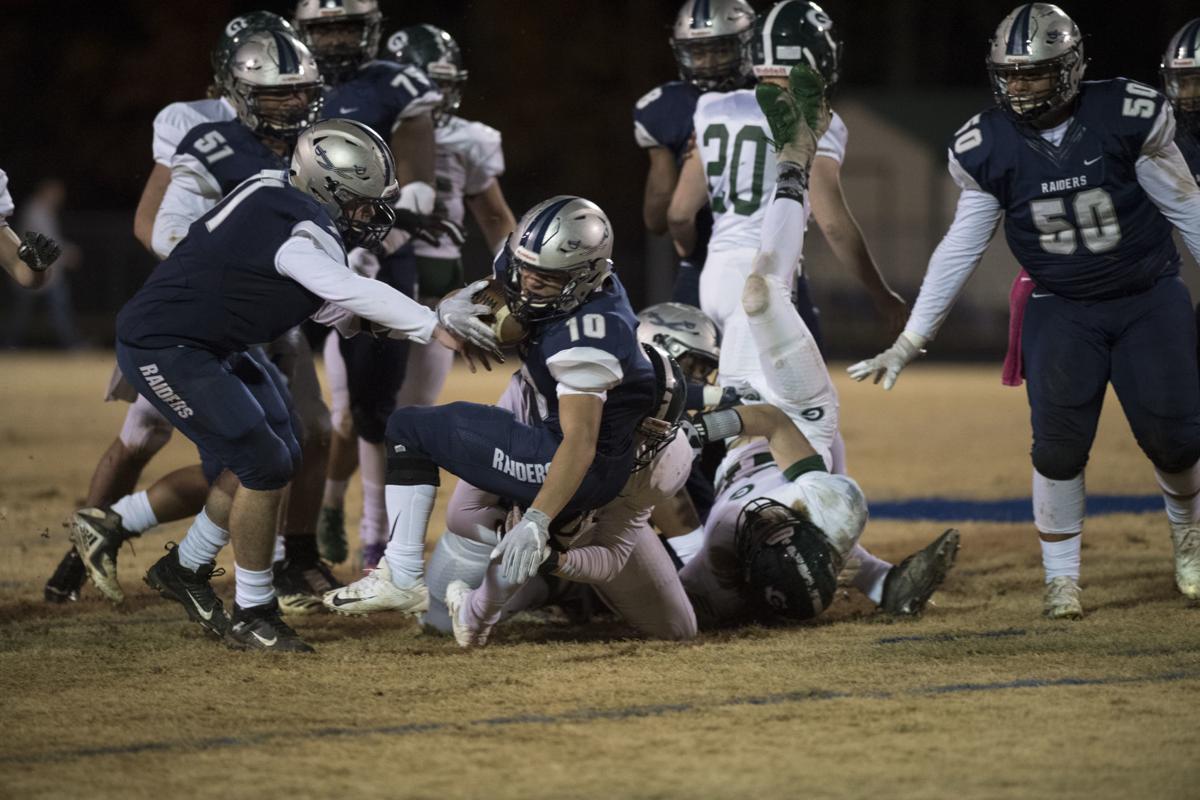 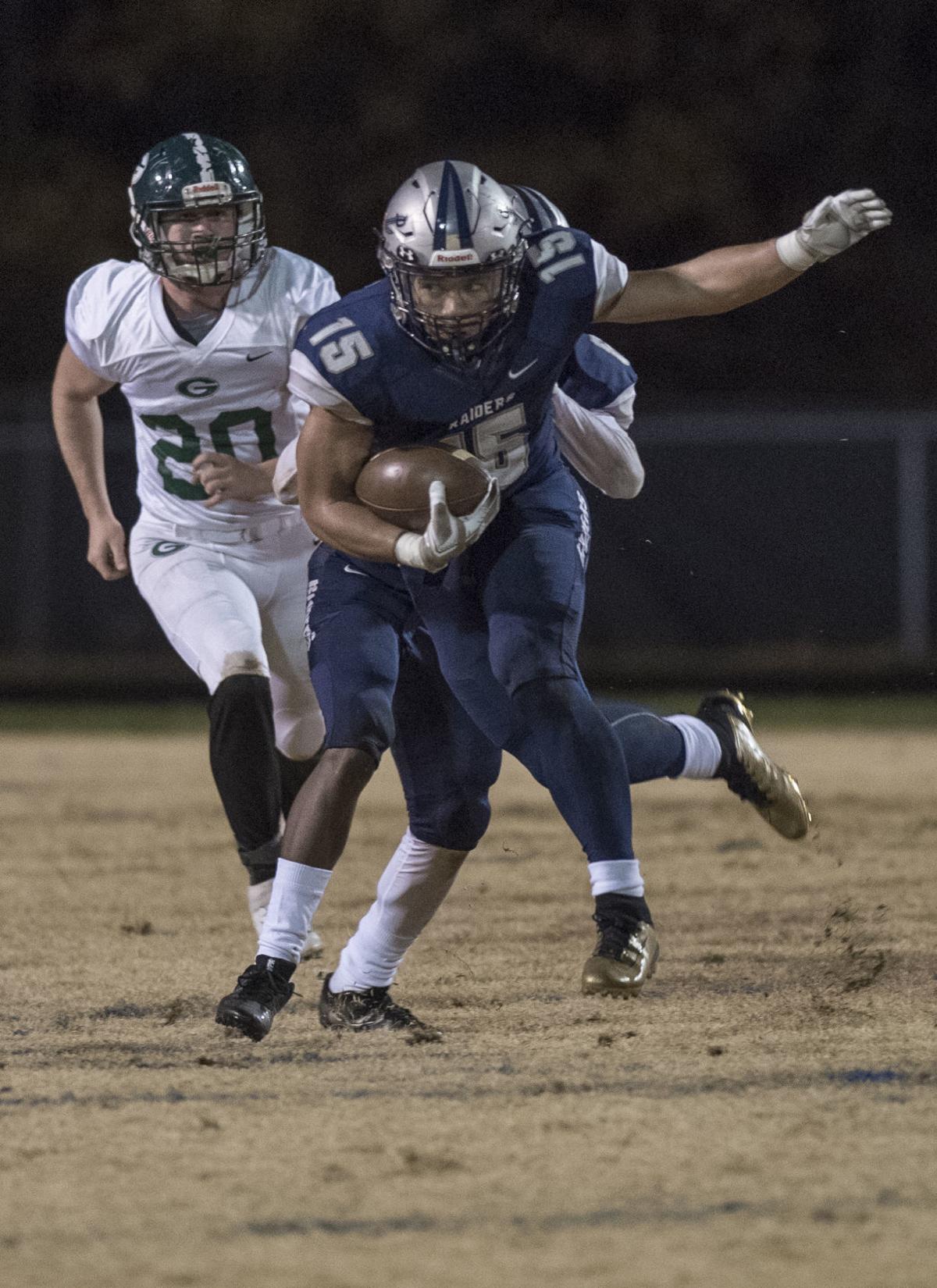 Appomattox running back Cristian Ferguson carries the ball during the Raiders' win over Rustburg at Appomattox County High School on Sept. 6, 2019.

The 35-minute bus ride from Appomattox to Buckingham County High was long, painful and full of sadness.

Raiders senior running back Cristian Ferguson began the day excited, ready for opening night of the high school football season, his final one in an Appomattox uniform.

But right before stepping on the bus, Ferguson received heartbreaking news. His cousin, 6-year-old Leighna Grace Ferguson, had died after a battle with leukemia.

The date was Aug. 30, a day suddenly filled with grief.

Cristian Ferguson, however, was not alone.

On the bus that evening was junior teammate Keyshawn Baker, who, for nearly six years, had struggled to deal with the death of his sister, Jada Pearl Baker.

And seated around those two players were their teammates, the ones who have heard of the numerous tragedies in this community, who know students affected by sudden loss, and who have struggled with personal heartbreak themselves.

So the team rallied around Ferguson.

“Everybody noticed I was crying on the bus after I got the news,” Ferguson recalled this week. “They knew the situation, that my cousin was very sick. But then everybody huddled around me and prayed.”

High school football players often play through physical pain. Sometimes, they play through other types of aches, too. Some are the kind typically associated with high school life: lost games, broken relationships or family problems. Others don’t mend so easily. Those aches, the ones Ferguson and Baker are dealing with during their formative years, never really go away.

As they struggle to find peace, though, they’ve also found something else: a family that cares.

Appomattox began the 2019 campaign by losing two of its first three games. To understand how much of a variance that is from the norm, you’d have to know that the Raiders reeled off three straight state titles from 2015 through 2017; that they entered this season having won 54 of their last 57 games; that they were the celebrated kings of both the Dogwood District and the VHSL’s Region 2C for an entire presidential term.

It’s been anything but that. The Raiders, who host Bluefield-based Graham High in Saturday’s Class 2 state semifinals at 2 p.m., rallied after that difficult start.

Bragg Stadium, which has witnessed its fair share of postseason games the last five seasons, will be rocking once more. Fans will try to will to victory these Raiders, this improbable group that somehow began clicking late in September and haven’t slowed since.

Appomattox (11-2) lost to Buckingham on opening night, hours after Ferguson received news of Leighna’s death. But after falling to Heritage two weeks later, the squad won 10 straight. They captured the Dogwood and Region 2C for a fifth straight season and have won three straight postseason games.

“She was doing good,” Baker recalled about the days prior to Jada’s death. “She hadn’t had any bad asthma attacks. That one day was the worst asthma attack she had ever had, but I thought she was gonna be ok.”

There are still days, nearly six years later, when the junior struggles. He feels like he took Jada for granted, because he thought she would overcome her illness. The tears still flow, “out of nowhere,” he said.

“But everyone around this school supports me,” Baker added. “They’ve got my back and they know I have theirs.”

Through the grief, the pain and the process of healing, he’s become stronger.

“I wasn’t who I needed to be,” Baker said of the time before Jada’s death. “But that got me closer to God and made me who I am today, because I realized I can’t take things for granted.”

Baker, who has three brothers and two other sisters, also has a much bigger family. Some are the players with whom he celebrated a state championship, when he was a freshman in 2017. Others are the guys who suit up for the Raiders now, who bonded this fall after a dismal start.

“This new team didn’t really have anything,” he said, thinking back to August. “We were a team, but we weren’t yet a family. But now, we’re brothers; we’re really family now.”

One week before her death, Ferguson found out Leighna “probably wasn’t going to make it too much longer.”

Since her Aug. 30 death, Ferguson has played for Leighna’s memory. The 5-10, 205-pound senior has rushed for 1,454 yards this season, scored 17 touchdowns and averages 10.4 yards per carry. And every time scores, he honors his cousin.

“I have a certain celebration,” Ferguson said. “I point to the sky and I imagine I’m driving a car, because the last conversation we really had, she told me her dream car was a pink Altima.

“That’s one of those little things, but I’m really just making sure everybody knows this is for her.”

Because of the loss, this season has been difficult for Ferguson. But his teammates have been there for support, as has coach Doug Smith.

“He doesn’t worry just about football,” Ferguson said of his coach. “If you have family struggles, he’s gonna be there for you.”

As Appomattox’s featured running back, Ferguson will be a target for the G-Men (11-2) on Saturday. And whether Appomattox wins or loses, this will be Ferguson’s final game at Bragg, because next week’s Class 2 state championship will be held in Salem.

So Ferguson isn’t ready for the run to end. This is his group, his extended family, and together they’ve learned to have faith in each other. Together, they’ve played hard, learned to accept defeat and pulled off an improbable postseason run.

And together, they’ve laughed and cried.

“It’s just a lot of prayer,” Ferguson said when asked how he’s dealt with difficult times. “We’ve really instilled that, because since there have been so many tragedies throughout this community, we really needed somebody to just love us and be there for us, just to be strong for us.”