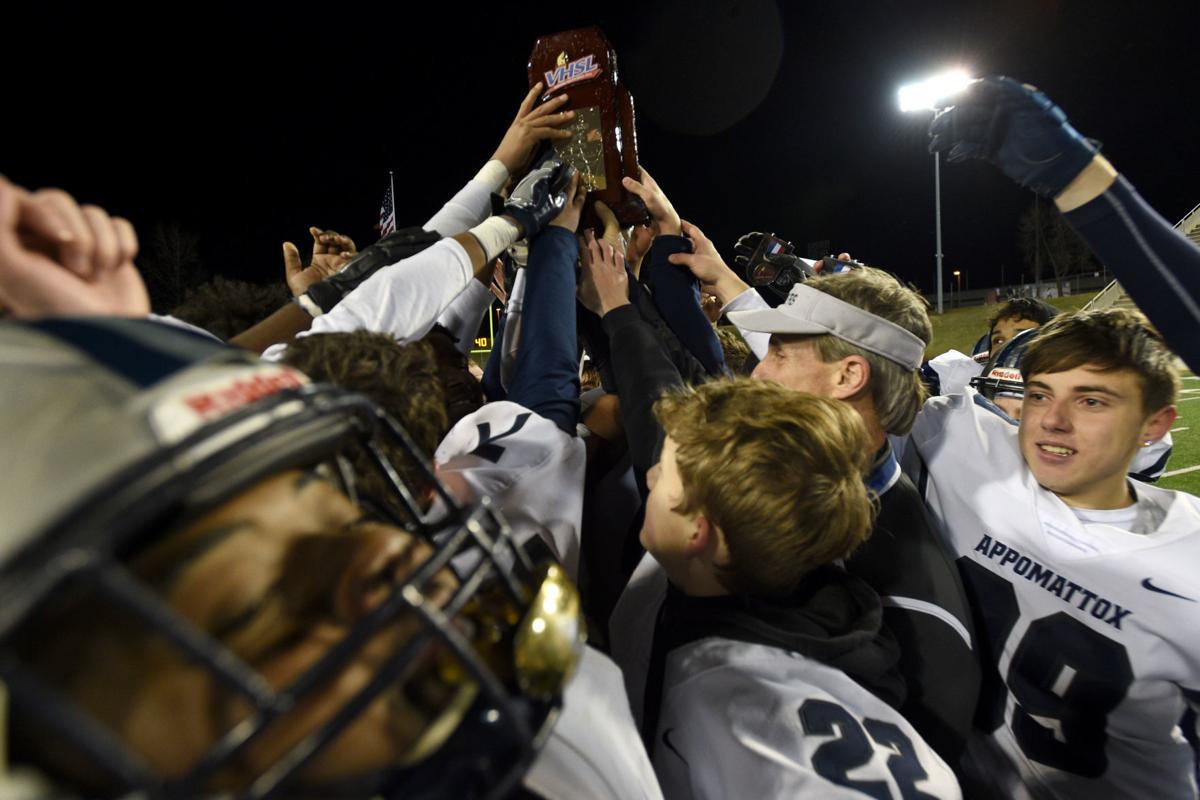 Players hold up the trophy after winning against Stuarts Draft at the Class 2 State Championship at the Salem Football Stadium in Lynchburg on Dec. 14, 2019. 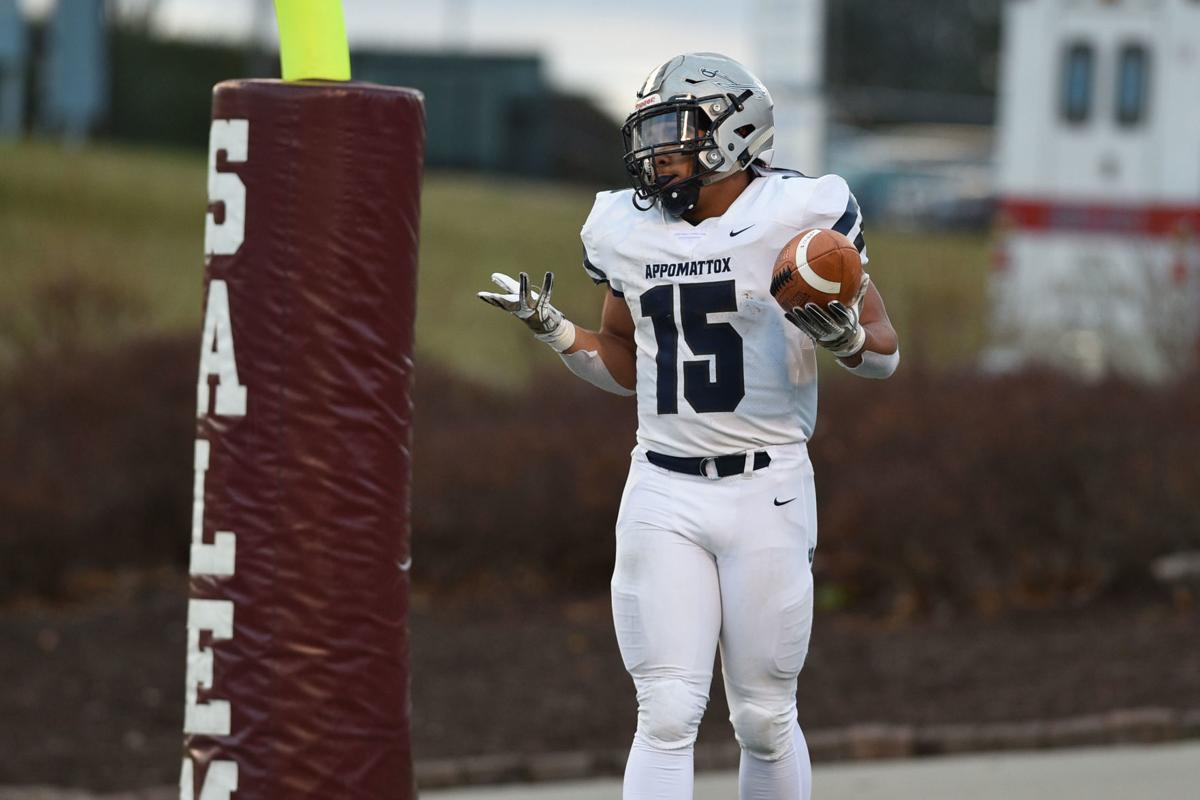 Appomattox running back Cristian Ferguson shrugs after scoring a touchdown against Stuarts Draft in the Class 2 State Championship at Salem Football Stadium in Salem on Dec. 14, 2019.

Players hold up the trophy after winning against Stuarts Draft at the Class 2 State Championship at the Salem Football Stadium in Lynchburg on Dec. 14, 2019.

Appomattox running back Cristian Ferguson shrugs after scoring a touchdown against Stuarts Draft in the Class 2 State Championship at Salem Football Stadium in Salem on Dec. 14, 2019.

SALEM — This team doesn’t give up, the Appomattox coach said as some of the celebration at Salem Football Stadium died down.

After Doug Smith’s Raiders went three-and-out on the opening possession of the second half, then gave up a game-tying score, they didn’t give up.

After Stuarts Draft perfectly executed a couple trick plays to set up another score, which cut their lead to one touchdown, the Raiders didn’t give up.

And when they started the season with two losses in their first three games, Appomattox didn’t give up.

So on Saturday, as they responded to every one of Stuart Draft’s attacks on the biggest stage of the 2019 season, the hard work paid off in the reward every team longs for: a state championship.

For the fourth time in five years, Appomattox hoisted the championship trophy by defeating Stuarts Draft 42-21.

In their past 12 games, the Raiders put together 12 wins. Saturday’s victory in the Class 2 state championship, of course, was the sweetest.

“Oh, it feels 100 times better,” Tyler Gilliam said when asked about whether the postgame feeling lived up to his expectations. “This moment is a moment I’ll never forget.”

Gilliam’s first taste of the Appomattox football wasn’t so sweet, though. The Raiders dropped their season opener in August. Back then, reaching Salem again seemed, perhaps, like a dream relegated only to the realm of imagination instead of reality.

But thanks to their determination to work as one unit, with offense, defense and special teams all clicking, the Raiders (13-2) pulled off what looked so improbable about four months ago.

“Nobody really believed that we could do it,” Gilliam said, “and being able to actually capitalize and do it, it’s just crazy.”

As it defeated a Stuarts Draft team that entered with just one loss on the season, ACHS, indeed, put all aspects of the game together.

Offensively, multiple people contributed for six total touchdowns. Special teams play, including a big 62-yard kickoff return by Gilliam in the third quarter, set up a score. Defensively, when the Cougars (13-2) reached into their bag of tricks to set up a touchdown that cut the Appomattox lead to 28-21, the Raiders clamped down.

First, it was Cristian Ferguson, the senior running back who collected his third career championship Saturday, who delivered. He opened the scoring with a 46-yard run that gave Appomattox plenty of momentum early in the game.

“Good blocking by the line, and just green grass,” Ferguson said of his touchdown run.

The burly back added a 14-yard run that capped the scoring with 2:37 left in the game.

Tre Lawing, the team’s sophomore quarterback, stepped up, too. In his first chance to lead the Raiders to a state title, he did the job, accounting for four touchdowns.

Lawing ran it in from 2 yards first to give his team a 14-7 lead in the second quarter, then punched it in from the 5-yard line in the third quarter after Gilliam’s long kickoff return.

Later, Lawing did everything himself on a one-play drive, ripping off an 80-yard run down the right sideline. He also found Gilliam for a 7-yard touchdown pass on another one-play drive.

Although Lawing’s 80-yard run effectively sealed the win for the Raiders, the defense stepped up, too.

Freddie Watkins took a 7-yard pass from Henry Cooke for a Stuarts Draft score in the fourth quarter — made possible after the Cougars converted on a fake punt and then executed what looked like a reverse for a 42-yard pass — that cut the Appomattox lead to seven points. Then, the Raiders locked down on the defensive side, forcing a three-and-out, coming up with an interception by Tez Booker and forcing a turnover on downs for the remainder of the fourth quarter.

“Everybody had to play their part. They couldn’t play anybody else’s part,” said junior Keyshawn Baker, who went down on the game’s opening kickoff with an injury, but then returned to help out especially on the defensive side of the ball. “They played their part, and we completed the puzzle.”

For Stuarts Draft, Cooke accounted for a pair of touchdowns — one rushing and one passing — and had 120 yards on 11-of-32 passing. Aaron Nice (1-yard run) and Watkins (7-yard reception) each added a score.

Ferguson had 117 yards on 11 rushes, and Lawing finished with 121 yards on 16 carries to go with 9 yards on 2-of-5 passing in his first time playing on the Salem Stadium turf for a state championship.

The young quarterback let the feeling of accomplishment wash over him as teammates and coaches rejoiced around him. He had a hard time encompassing everything it took for his team to get there. But the victory, he’d be fine to experience that again.

“I could play another one,” Lawing said. “That’s how hyped I am.”

This story will be updated.

The Appomattox Raiders hoisted the championship trophy once again on Saturday, capturing their fourth title in five years with a 42-21 victory…

NOTEBOOK: Gilliam all over the field for ACHS, and more

Playing in his first state championship game, wrapping up his first-ever season of varsity football, the senior couldn’t be stopped.