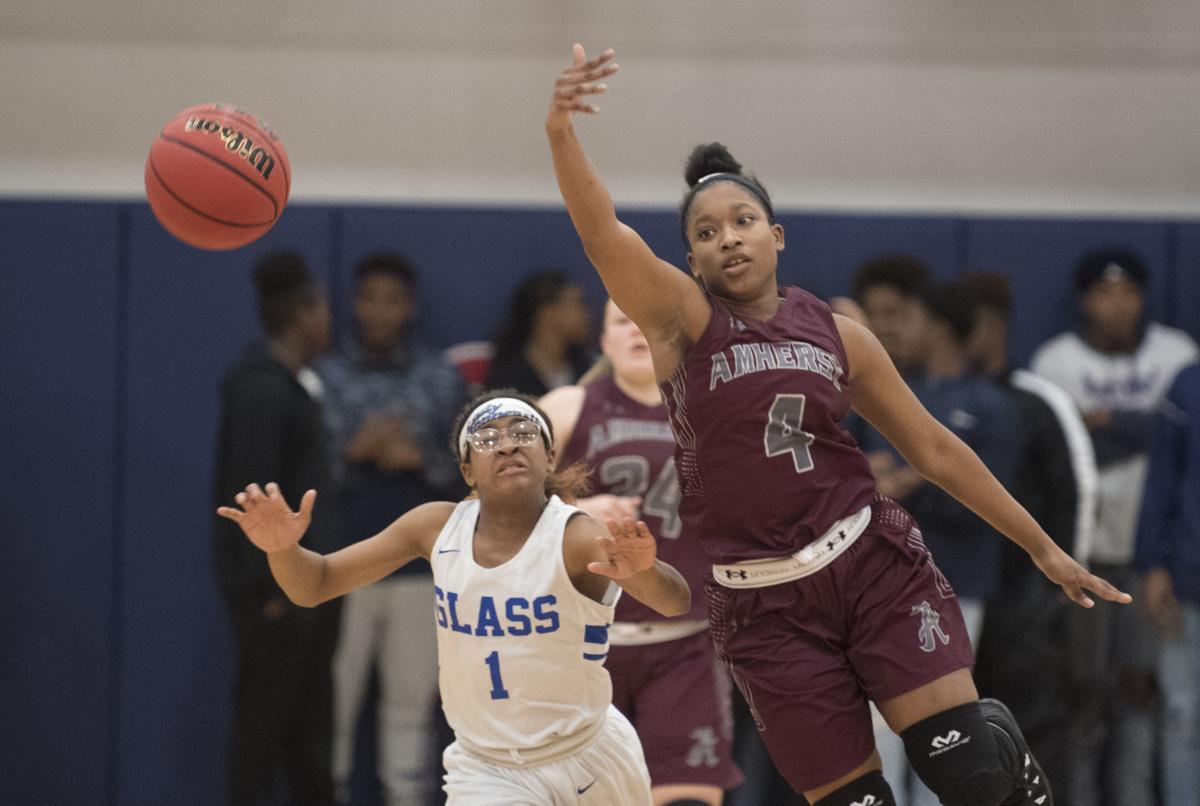 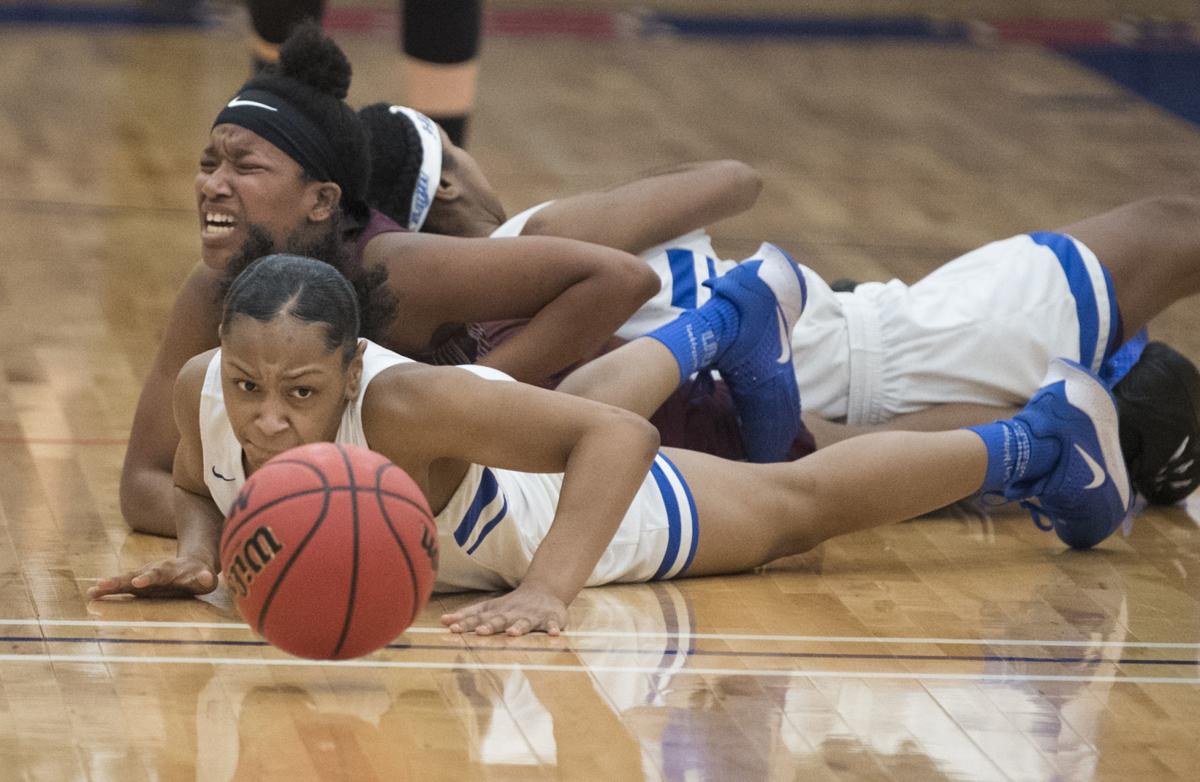 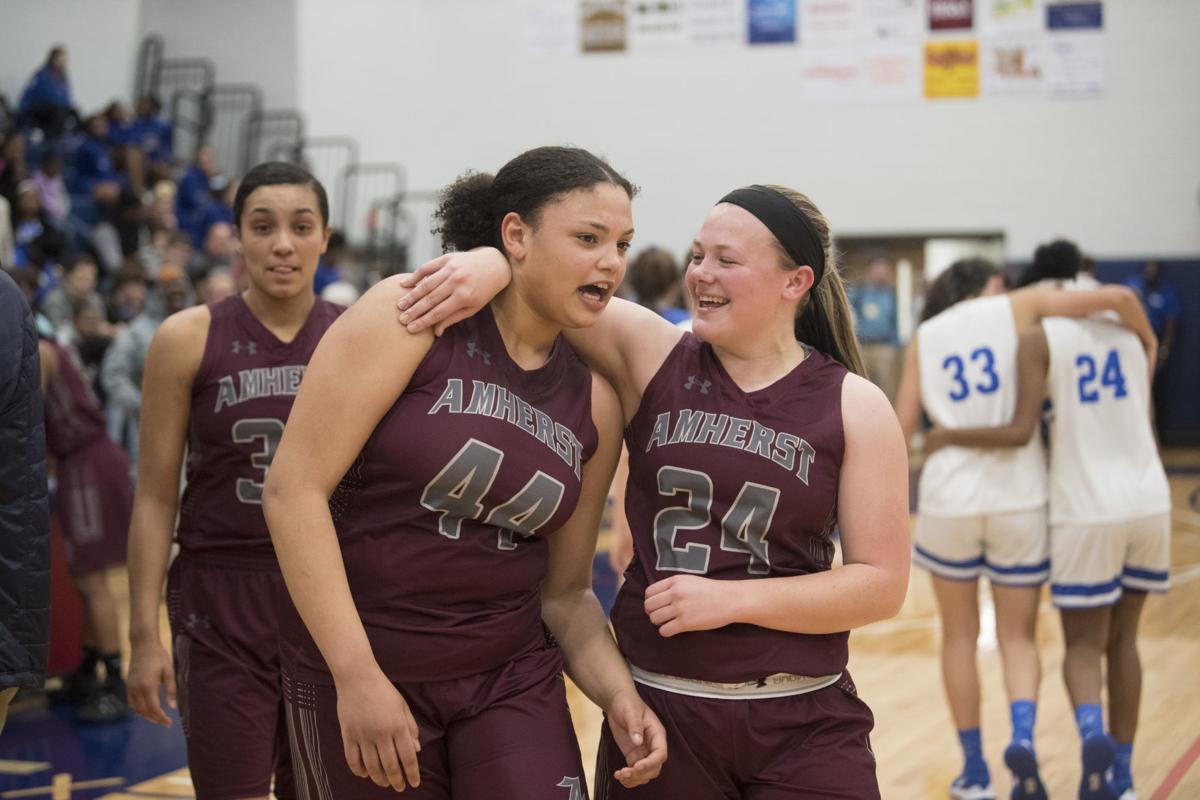 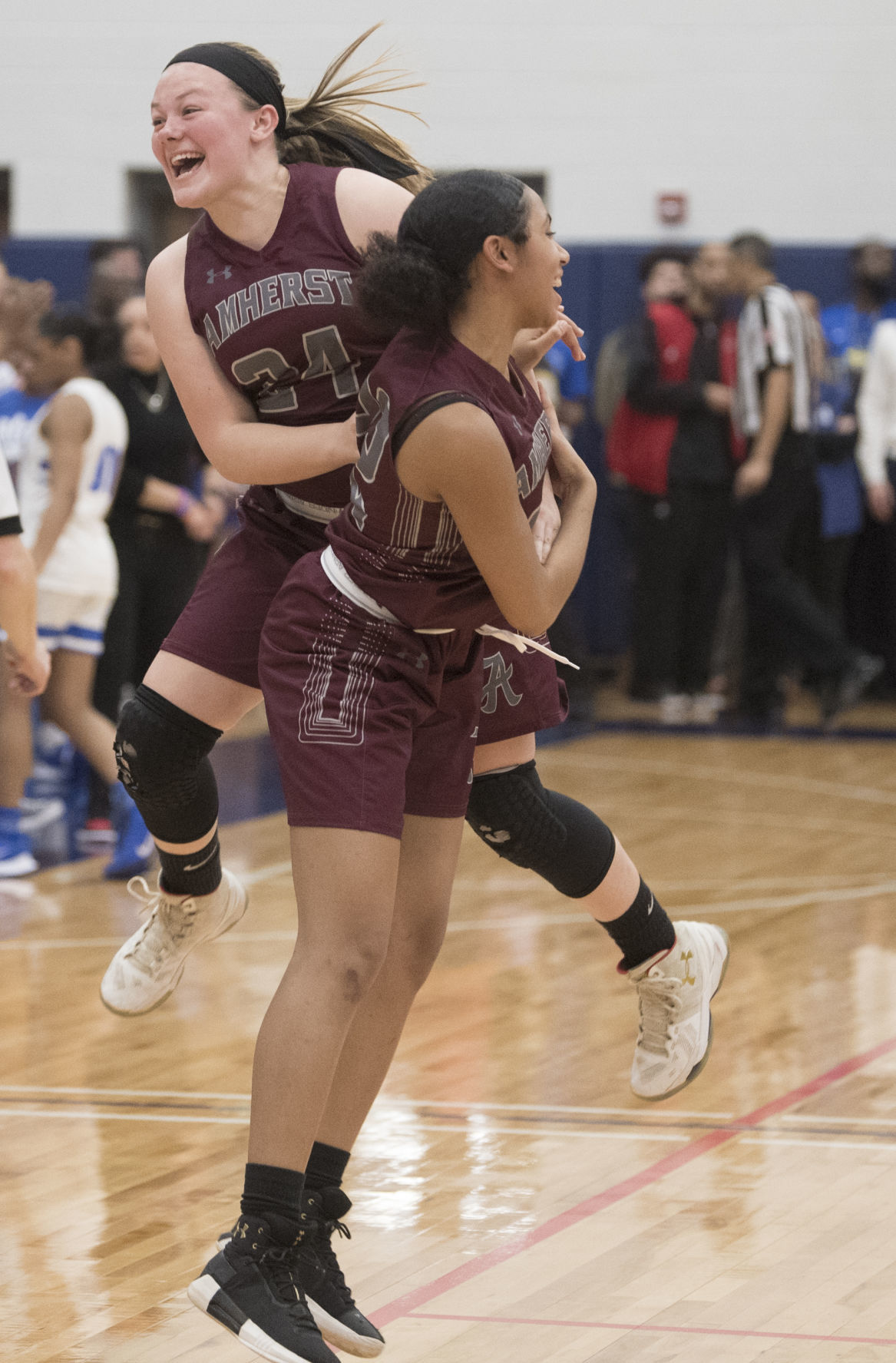 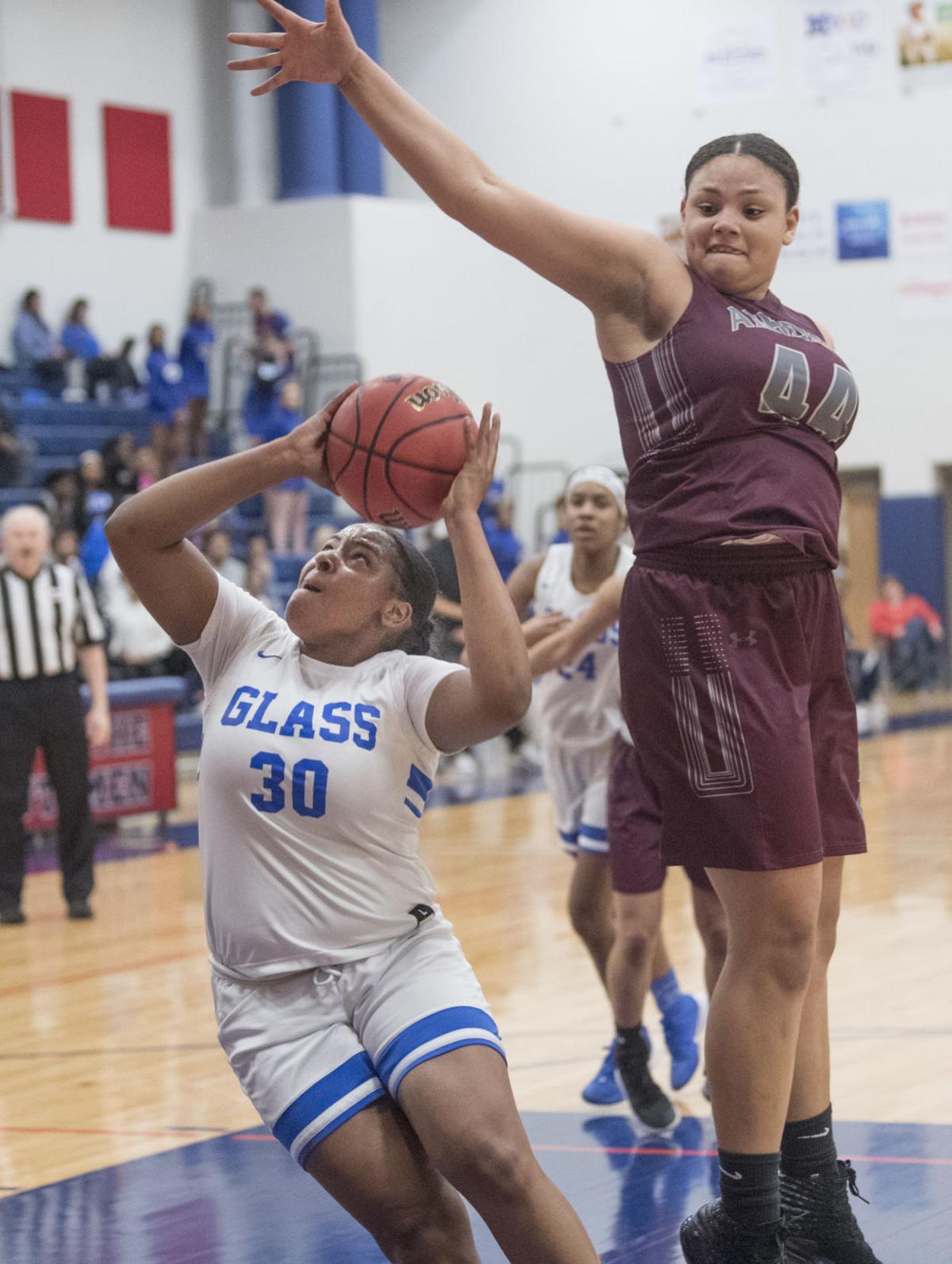 BEDFORD — Things were looking up for E.C. Glass, the girls basketball team that came into Tuesday night’s Seminole District championship game as the obvious favorite.

The top-seeded Hilltoppers were in surprising position late in the contest against third-seeded Amherst. In a packed Liberty High gym, the ’Toppers were down three possessions with less than three minutes to go when, finally, momentum seemed to swing back in their favor.

Jamiyah Henry hit a 3-pointer that cut Amherst’s lead to five points, and Amari Osei came up with a stop on the defensive end by snatching away the ball near midcourt.

But with no Amherst defender in sight and only the basket ahead, the Hilltoppers couldn’t get the easy layup to fall. The chance at a manageable, one-possession game slipped away in an instant.

At the other end, Amherst made Glass pay. Holland Saunders knocked down her third 3 of the night.

That was the dagger.

For the second time in less than a week, the Lancers pulled off the upset, claiming a 66-60 victory and the Seminole crown.

“I’m extremely proud,” said Amherst coach Ron Carter, who watched his team leap and scream in celebration after it beat Glass, the feat no other team in the district could accomplish.

It was only seven days before, in fact, that the Lancers were one of the Hilltoppers’ casualties on their path to an undefeated record in district play in the regular season.

But that 20-point loss, and the other double-digit loss Amherst suffered to Glass in the regular season, didn’t matter Tuesday night. In Bedford, just a couple days after beating second-seeded Brookville in the district tourney semifinals, the Lancers (15-7) put together a scrappy performance to win.

“I feel like Amherst wanted it more than us,” said Glass senior Mya Hamlet, who finished with 25 points and did everything she could in the second half to will her team back into the game. “You could definitely see the fight in their eyes.”

Early on, the Lancers slowed down the athletic Hilltoppers, outscoring them 11-9 in the first quarter. The game remained close throughout the first half, and despite Glass pulling ahead in the second, Amherst took advantage of the offensive opportunities Glass defense allowed.

Just before halftime, the Hilltoppers (19-3) dared Kendra Smith to release a shot from beyond the arc, and although she isn’t typically a long-distance shooter, Carter said, Smith let it fly and saw the ball go through the basket.

The Glass lead, then, was just two points.

“You’ve lost to them twice this year, and you’re in the ball game,” Carter said, recalling his halftime speech to his team. “You’re showing them you can compete.”

After the break, the Lancers pounced. Nadia West made an easy shot right under the basket just over a minute into the third quarter, and her team led the rest of the way.

Hamlet, named the Seminole District player of the year after the game, put the Hilltoppers on her back in the third quarter, scoring 12 of her team’s 17 points in the period.

“I told her, ‘You’ve got to take over right now. You gotta be the leader,’” said first-year Glass coach Anitra Thomas, the Seminole District coach of the year.

Hamlet took just three shots in the first half and tallied four points, all at the free-throw line. In the third quarter, though, the ball was always in her hands.

Still, it wasn’t enough to overcome the Lancers, who stayed calm when facing Glass’ full-court pressure, found open players to set up high-percentage shots and forced the Hilltoppers into foul trouble, resulting in tons of scoring opportunities at the free-throw line.

The teams combined to shoot 66 free throws. Amherst knocked down 19 of 31. While not the best percentage at the line at 61.3%, Carter said when his team shoots better than 50% there, it often has a chance.

On the other side, the foul trouble hurt Glass. Henry picked up two early fouls in the game and got to four with five minutes left in the third quarter. Jordyn Goode also had four fouls before the halfway point of the third period.

“That’s been a struggle for us all season,” Thomas said. “If we can limit foul trouble, limit fouls, typically we’re in those games and we’re dominating. Anytime we get in foul trouble, we let teams kind of stick around with us. …

Smith led the Lancers with 17 points, with 12 of those coming at the line. Saunders added 16 points and went 5 of 8 at the stripe.

West finished with 12 points for Amherst on 6-of-9 shooting, with many of her points coming after her teammates found her open under the basket. Other times, she dashed the Hilltoppers’ momentum by pulling down an offensive rebound and sticking it back for two more points.

Glass, which shot 68.6% from the line, had more made free throws (24) than field goals (16). Thomas said her team will need to ensure it takes advantage of the easy opportunities it missed Tuesday if it plans to make a run in the rest of the postseason.

Hamlet led all scorers with her 25 points and went 12 of 15 at the charity stripe. Henry chipped in 11 points, and Goode had 10.

The teams head now into region play. Both teams will host Region 4D quarterfinal matches at 6 p.m. Friday. Top-seeded Glass will play No. 8 Jefferson Forest, while No. 4 seed Amherst faces off against No. 5 Blacksburg.

Here's a look in photos at some recent high school basketball games in the Lynchburg area:

BEDFORD — Rayvon Graham put on a show here Tuesday night, but the E.C. Glass point guard had more on his mind than just a Seminole District To…