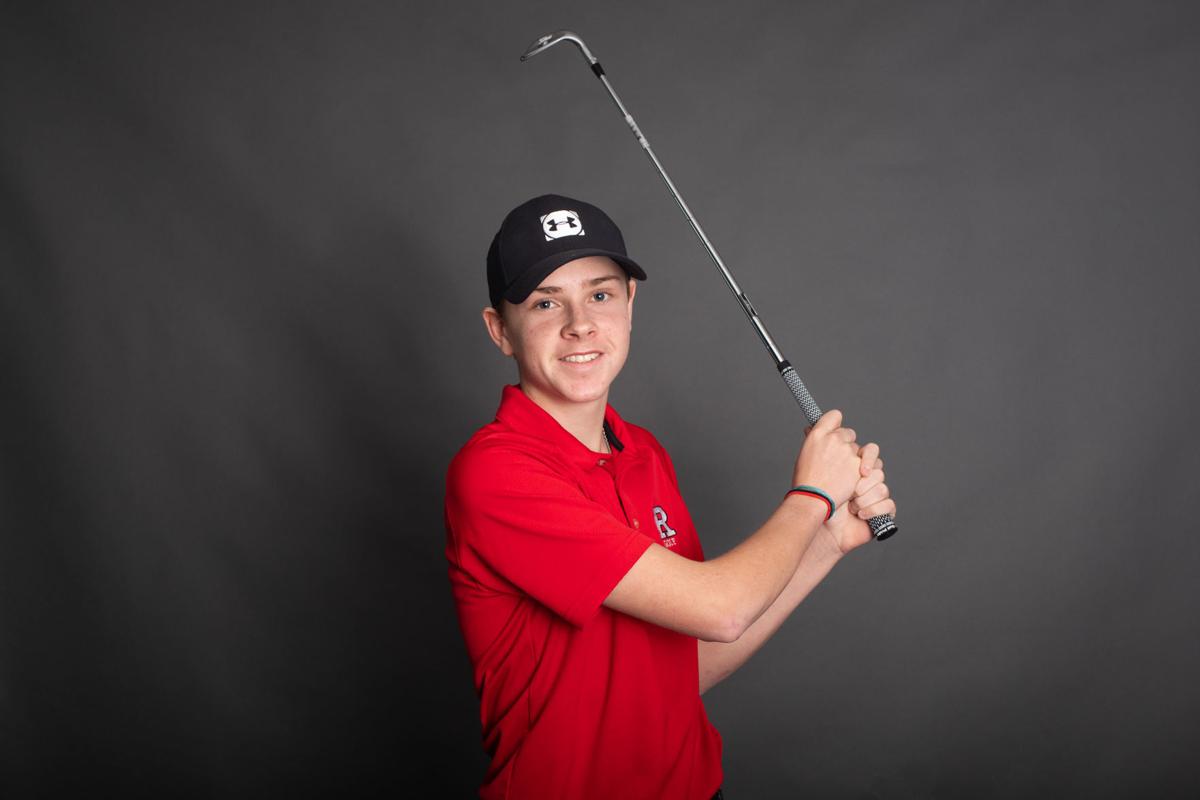 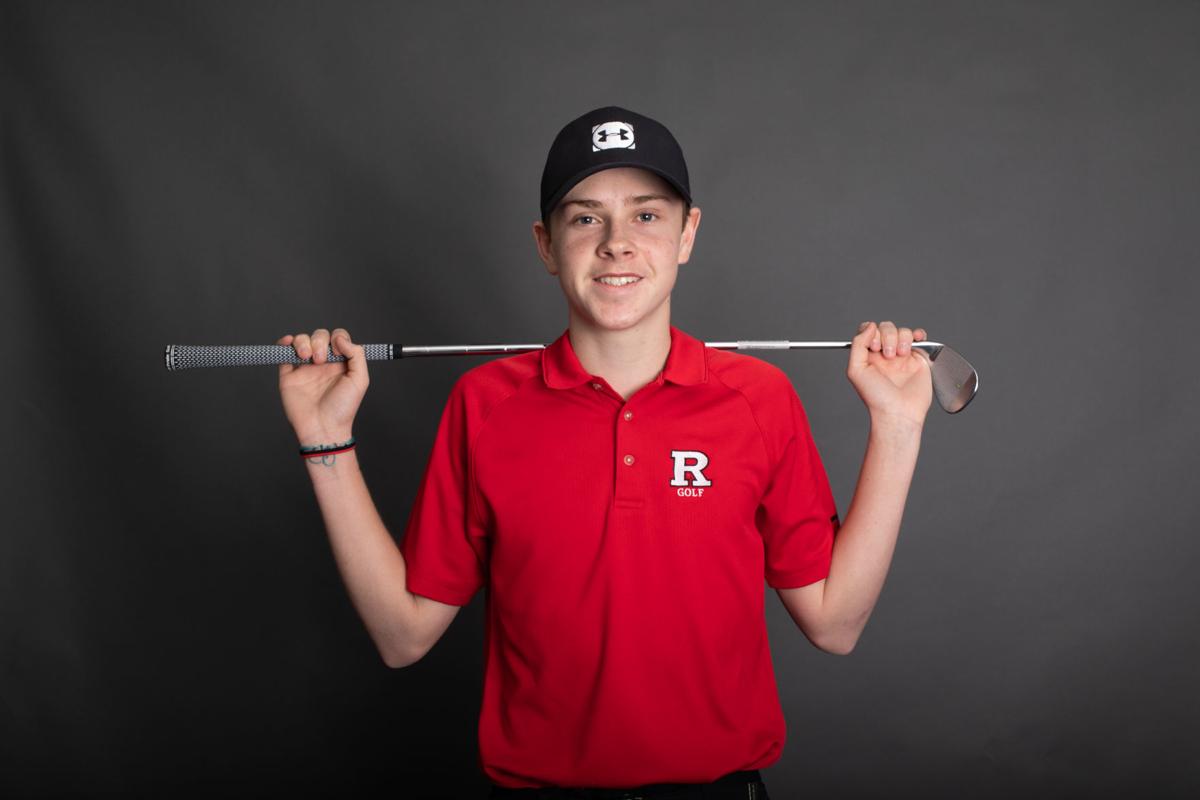 Q: Have you been able to reflect back on what you were able to accomplish during a season in which you won all but one match?

A: It was a great year that I worked hard for. I worked all summer and the year before that to try to strive and have a great senior year.

Q: What was the key to your stellar senior season?

A: I played in a bunch of tournaments over the summer [in the American Junior Golf Association and Virginia State Golf Association]. I got a job down at Falling River [Country Club], so I played like mostly every day down there, so that helped a bunch.

Q: During your summer working at Falling River, did you get any tips from the locals there?

A: I got some help from Faber [Jamerson] and Colton King.

Q: What were the biggest things you learned from them?

A: Faber helped me a bunch with my putting, which is really what was holding me back. That got me a huge jump in my scoring average.

Q: What specifically did Jamerson do to help change your putting?

Q: You and Jefferson Forest senior Garnet Manley III were the class of the area golfers and frequently competed for medalist honors. How much did the two of you push each other to get better on a weekly basis?

A: Garnet’s a great player to play against because he always pushes me to do better. It’s always a fun time playing with him. I remember one match this year at Ivy Hill, I shot 31 and he shot 32. We were just lighting it up back and forth at each other. It was fun.

Q: When did you realize this was going to be a special season for you?

A: When you come out on top in the Heritage Invitational, that’s a big tournament with a bunch of schools in it, and I figured after that it was going to be a good year and I could do something special.

Q: How nerve-wracking was winning the Class 3 state championship in a three-hole playoff? Or did you feel calm under the pressure?

A: Riding back to the 18th tee, I felt the nerves, but once I got up there and I split one down the middle of the fairway, it kind of like calmed down and I started playing golf normally.

Q: Now that time has passed, what did that mean for you to win the state championship?

A: It was kind of like an unreal feeling. Pretty sensational.

Q: What has been the biggest step for you in your development from when you began playing golf to now?

A: I’d say growing. I remember like my freshman year I was like 5 foot, probably, and I couldn’t hit the ball very far, but I always had a good short game. Being able to hit it farther [at current height of 5-foot-9] has helped along the way.

Q: You’re heading to Longwood to play for a program that is competing to win Big South Conference titles on a yearly basis. What went into that decision?

A: Coach [Kevin] Fillman treated me nice, and I have a high respect for him and what he’s been able to do with his program. It was a good fit.

Q: Is it nice that Longwood is close to home?

Q: What’s something you like to do on the course — whether it be on the tee box, fairway or green — that keeps you loose during a match?

A: I can’t say I really have a superstition or routine I do.

Q: Is there someone you enjoy playing with in a group?

A: I played with Cade [Bigham] and Charlie Riddle a lot. They would always push me and have fun. I always love playing with my dad [Andy], but that’s just a beatdown every time.

Q: Who is your favorite teacher at Rustburg?

A: Bojangles sausage biscuit combo with fries and a sweet tea before the match.

Q: Who is the funniest person on the team?

Q: The team as a whole performed well throughout the season. How much did those guys improve?

A: It was amazing. Charlie and Cade and Nick Cross were able to put up scores every time. We had Wyatt [Bigham] and Noah [Gardner] that could put up great scores, too. It was a great season for all of us.

Q: What do you feel your lasting legacy will be on Rustburg golf?

All-Area Golfer of the Year

ALL-STAR STUFF: The 5-foot-9, 135-pound Rakes wanted to build on a strong junior campaign in which he won five times and finished fourth in the Class 3 state championships. He spent the summer before his senior season improving the one area he knew could help him get over the top: his putting. With tips from Falling River Country Club PGA professional Faber Jamerson, Rakes immediately saw the fruits of his labor by winning the Heritage Invitational, then rattled off seven more triumphs before postseason play began. There, he was unstoppable. Rakes won the Seminole District championship with a 4-under 67, shot 3 under to win the Region 3C title, then used all facets of his game — accuracy and distance off the tee, an above-average approach game and improved play on the greens — to win the Class 3 state championship in three playoff holes. Rakes claimed medalist honors in 11 of the 12 events he competed in during the season and posted a career-best 67.9 scoring average.

ALL-STAR STUFF: The 2018 News & Advance All-Area golfer of the year enjoyed a career season on the links. He shot a career-best 67 over 18 events with eight victories, 12 top-five and 14 top-10 finishes. … Shot a career-low 63 to finish second in the Woodford Classic. … Added runner-up finishes to Rustburg’s Nick Rakes in the Heritage Invitational and the Seminole District championship. … Won five regular-season Seminole District matches. … Claimed medalist honors in the Region 4D championship with a 6-under 65. … Finished sixth in the Class 4 championship with a 1-over 73.

ALL-STAR STUFF: Third in the area in scoring average at 75. … Won twice during the season at London Downs (18 holes on Aug. 7 and nine holes on Aug. 14), and won the All-American Cup at London Downs on Oct. 19. … Finished in a tie for third in the Seminole District championship at 4-over 75. … Tied for fifth in the Region 3C championship at 2-over 73. … Finished in a six-way tie for 14th at 7-over 79 in the Class 3 championship.

ALL-STAR STUFF: Finished the season ranked fifth in the area with a scoring average of 77.67. … Got off to a stellar start to his senior campaign by finishing in a tie for fourth at 2-over 74 in the Heritage Invitational. … Finished third in four Seminole District matches (Aug. 12 and 15 and Sept. 4 and 18). … Tied for seventh in the Seminole District championship at 8-over 79. … Tied for 11th in the Region 4D championship at 9-over 80.

ALL-STAR STUFF: Shot even-par 72 to claim medalist honors in the Spotswood Invitational. … Finished fourth in the area with a season scoring average of 76.9. … Posted eight top-five and nine top-10 finishes in 14 matches. … Tied for seventh in Seminole District championship at 8-over 79. … Finished 24th in the Region 4D championship and 37th in the Class 4 championship.

Cade Bigham (Rustburg, Sr.) — Was the medalist in a nine-hole, four-team Seminole District match at Hat Creek Golf Course on Aug. 29 by shooting even-par 36 to finish one stroke ahead of Rakes. … Posted a season average of 79.2. … Finished sixth at the Seminole District championship with a 7-over 78. … Shot an 11-over 82 in the Region 3C championship. … Finished in a tied for 12th at the Heritage Invitational.

John Toney (Jefferson Forest, Jr.) — Finished ninth in the area with a scoring average of 82.1. … Had three top-five and five top-10 finishes in 13 events with a low round of 79 in the Woodford Classic at Wytheville Golf Club. … Finished in a tie for 11th in the Seminole District championship and was 22nd in the Region 4D championship.

Peyton Watts (Liberty, Sr.) — Posted a scoring average of 84.22. … Tied for 14th at the Seminole District championship. … Finished 28th at the Region 3C championship. … Claimed medalist honors in a two-team match against Staunton River at Bedford Country Club on Sept. 29.

Owen Simmons (Staunton River, Jr.) — The younger brother of Jefferson Forest product and Liberty University redshirt freshman Isaac Simmons returned to the links this season after a one-year hiatus and led the Golden Eagles with a 85.1 scoring average. … Shot an 11-over 82 in the Blue Ridge District championship. … Finished in a tie for 12th in the Region 3D championship at 8-over 79.

ALL-STAR STUFF: The Cavaliers continued their dominating play in the Seminole District by winning the regular-season title for a sixth-straight year and then claiming the tournament championship by eight strokes over Rustburg. Jefferson Forest also won the Spotswood Invitational for the third straight year and added runner-up finishes in the Heritage Invitational and Region 4D championship. Manley’s golfers combined for nine rounds under par, and three of his golfers were in the top five in area scoring average.