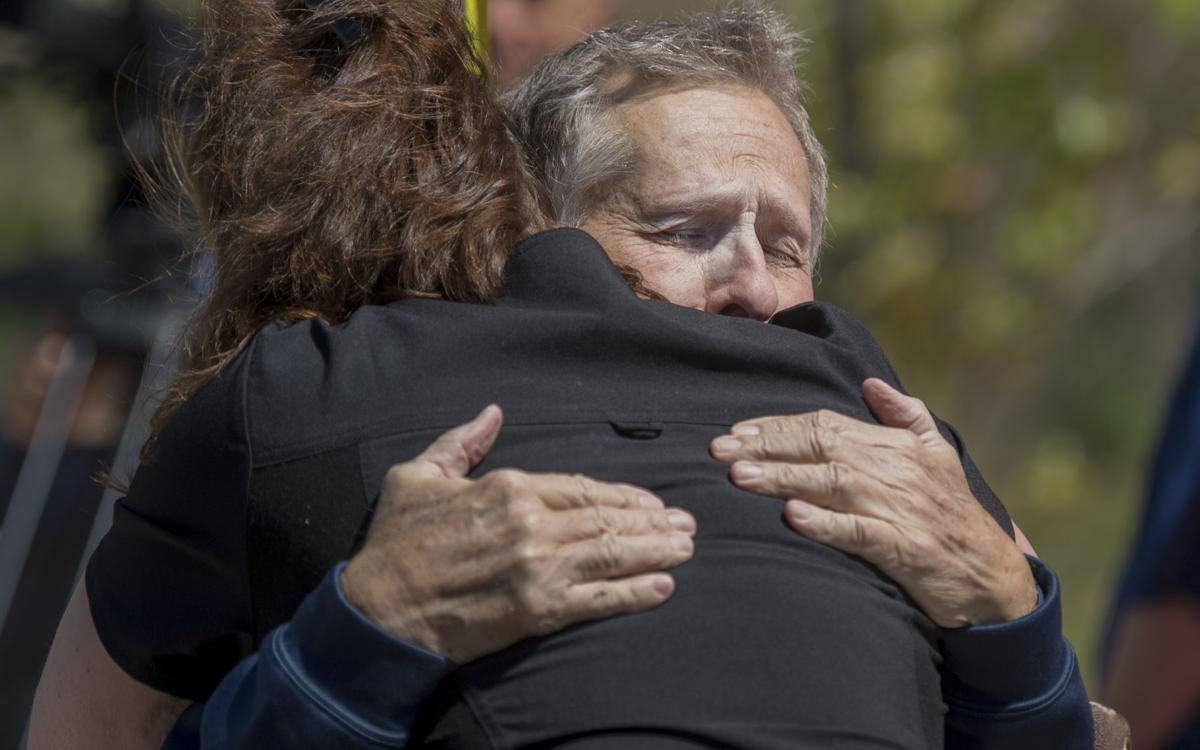 Former Lynchburg Hillcats general manager Ronnie Roberts gives Michelle Wells a hug during one of several emotional moments at a May 4 sendoff event. 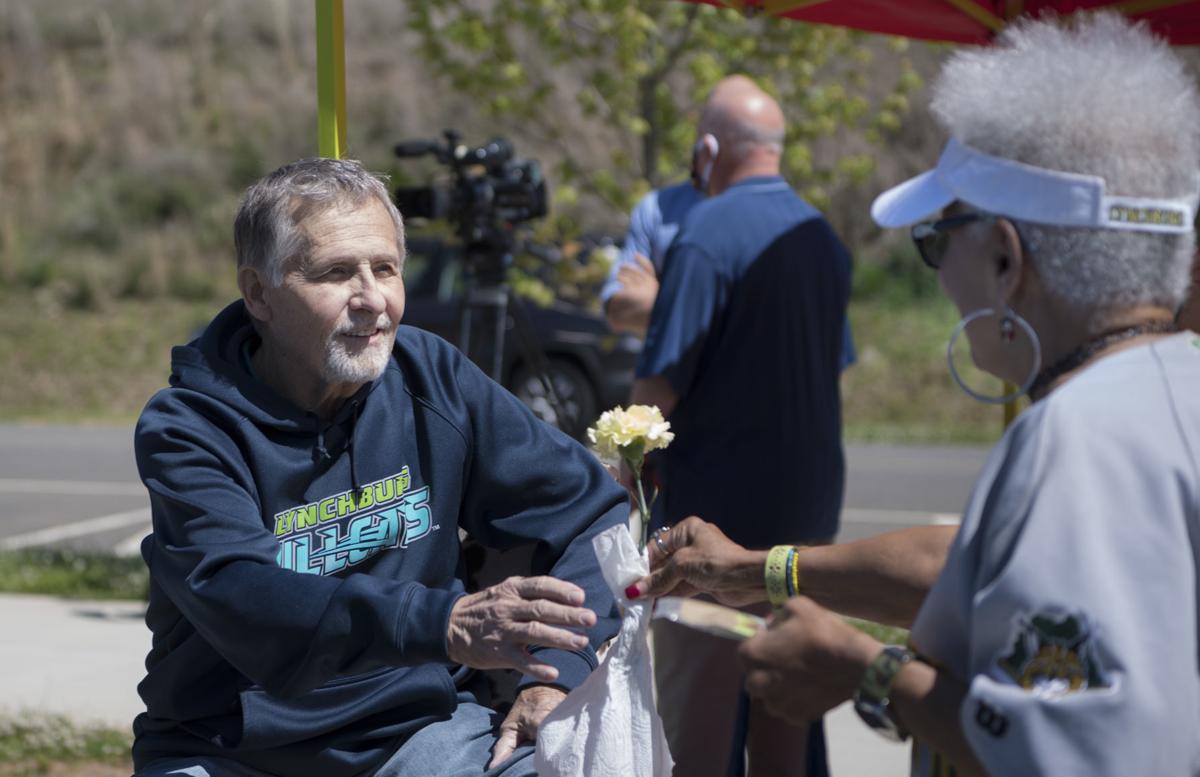 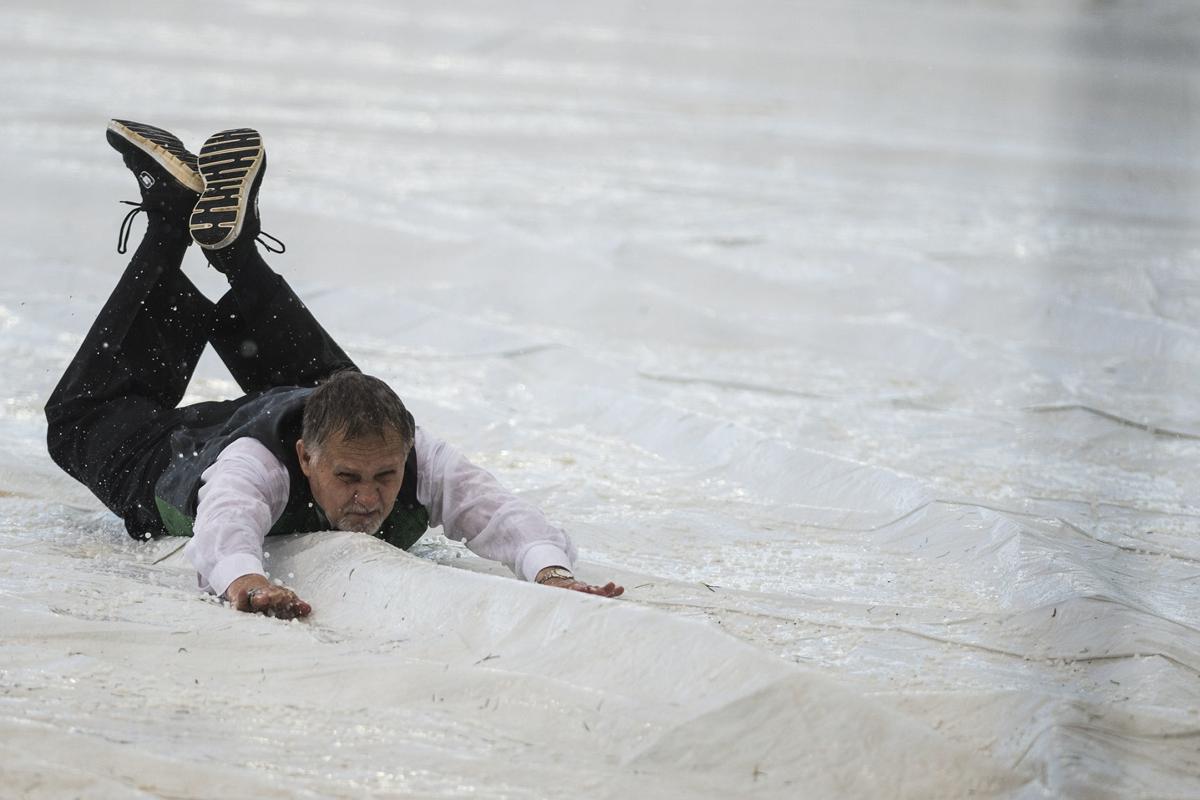 Hillcats general manager Ronnie Roberts slides across the tarp during a rain delay in April of 2016.

Fans of former Lynchburg Hillcats general manager Ronnie Roberts line up to get a selfie with him on Monday, May 4, 2020. 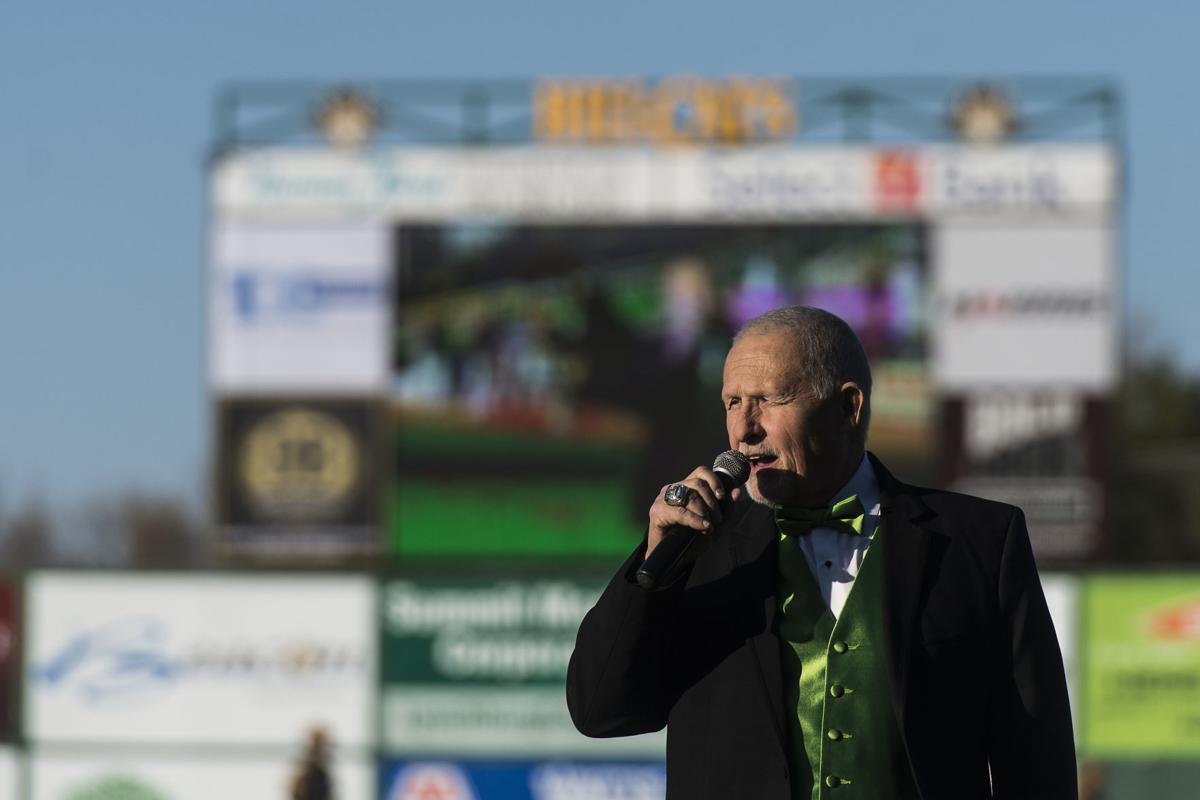 Hillcats general manager Ronnie Roberts speaks before the season opener against the Down East Wood Ducks on Thursday April 5, 2018. 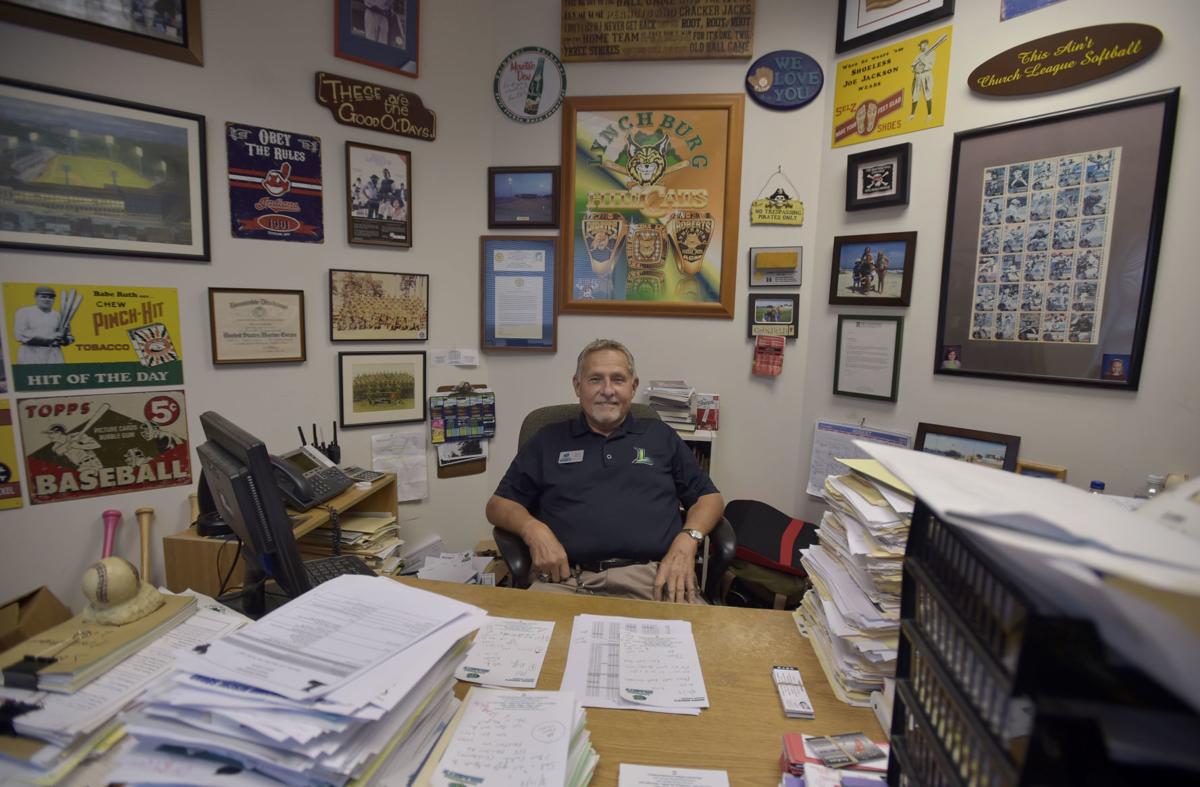 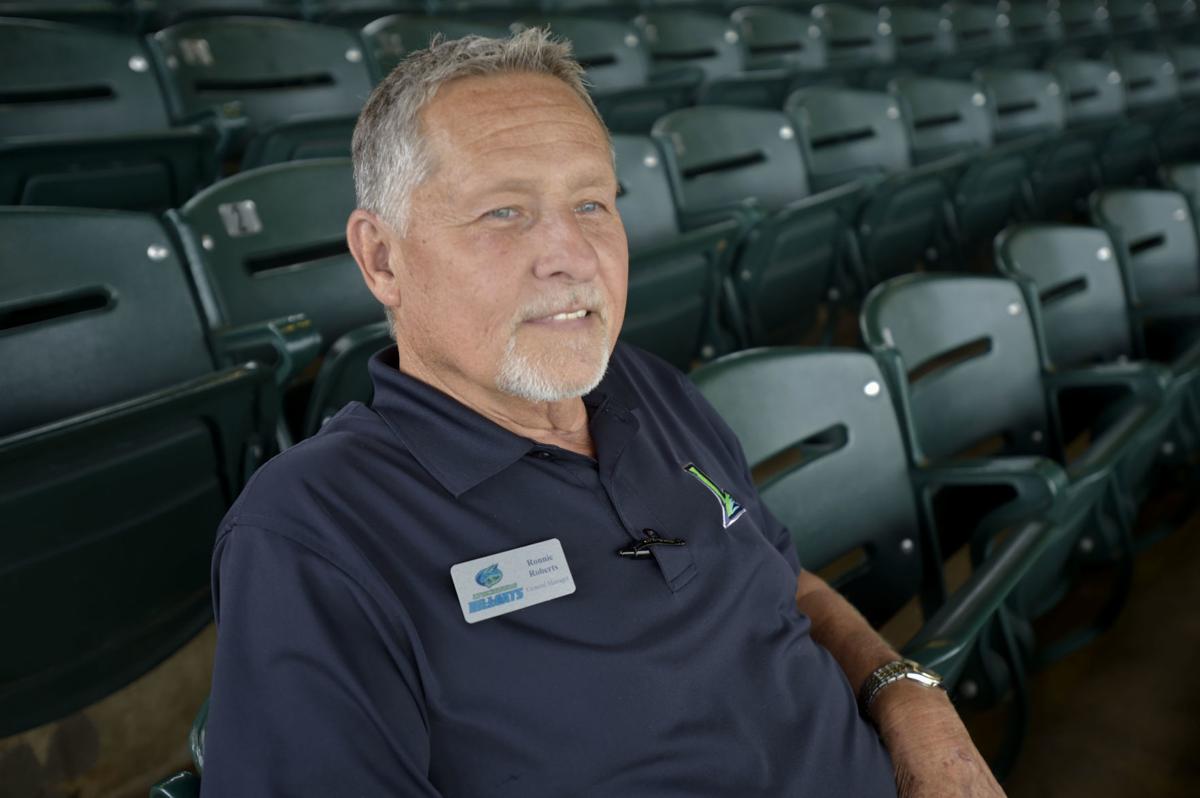 Former Lynchburg Hillcats general manager Ronnie Roberts gives Michelle Wells a hug during one of several emotional moments at a May 4 sendoff event.

Hillcats general manager Ronnie Roberts slides across the tarp during a rain delay in April of 2016.

Fans of former Lynchburg Hillcats general manager Ronnie Roberts line up to get a selfie with him on Monday, May 4, 2020.

Hillcats general manager Ronnie Roberts speaks before the season opener against the Down East Wood Ducks on Thursday April 5, 2018.

Ronnie Roberts, the man who for decades was seen as the face of Lynchburg minor league baseball, died Monday afternoon. He was 70.

Roberts died in North Carolina two weeks after leaving Lynchburg to enter hospice care. He battled cancer for more than a decade. In 2008, Roberts was diagnosed with prostate cancer, which had spread to his organs and bones last year.

“[I’ll remember] his passion for the city and the game,” Hillcats president Chris Jones said. “He was the definition of a baseball guy, baseball man. He lived and breathed the game. Loved everything about game days. Loved the fans. … [I] know he had an impact on so many people.”

Roberts held multiple roles in his 28 years with Lynchburg, home to the Hillcats, a Class A-Advanced affiliate of the Cleveland Indians.

He started his career with the organization as heads groundskeeper at age 41, when he left his career in the banking and insurance business to pursue a full-time job in the field he was passionate about: baseball. Roberts rose through the ranks with the organization — the only professional team he’d ever worked for — to become assistant general manager and eventually general manager.

“Ronnie, I always said he was the best hire I ever made,” said Paul Sunwall, the club’s former CFO, president and general manager who hired Roberts three decades ago. After Roberts had written job inquiries to teams up and down the East Coast, Sunwall was the only person to respond.

Roberts retired at the end of the 2018 season. But his friends and Hillcats faithful never forgot his impact, a fact made obvious by the droves of well-wishers who showed up to send him out of Lynchburg with a special parade earlier this month.

Hundreds of former and current Hillcats employees and front office staffers, community members and fans trickled through a drive-thru sendoff, stopping to share their gratitude and memories with Roberts.

Then, as on Monday, people remembered Roberts for his genuine care for others and for his commitment to providing a bright environment.

“Ronnie gave everything he had to the fans and front office staff alike. He truly was the backbone of the entire Hillcats operation,” said Kestrel Kerl, a former director of fan engagement with the Hillcats.

“I think it made him inspirational,” West said.

Duffy, who together with West made the trip to North Carolina last week to visit with Roberts, said every day at the stadium was “an opportunity for fun” for Roberts.

“I think that means a lot to the community when you have someone who looks at things through that lens,” Duffy said. “I don’t think a lot of people do that regularly or genuinely.

“He kind of let me know … you can enjoy yourself. You can make the best of things. Everybody knows that, but it’s a different thing to see someone demonstrate that.”

The two also talked about how comfortable Roberts made everyone feel, as he made it a priority to not only take care of the tasks of running a ballpark on game days but to visit with fans. From Lynchburg dignitaries to “your average Joe,” Roberts “could relate to just about anybody,” West said.

Roberts was a “baseball guy.” He was once a standout baseball player in high school and college and is a member of the Hall of Fame at Methodist University and Northern High School in Durham, North Carolina.

“Working in this field, you meet a ton of people that love the game of baseball, but I’ve probably never met anybody that had more passion for it,” Klein said.

Every day, whether the first day of a homestand or the last series of the season, was enjoyable for Roberts, Klein added.

“I would say he probably never had a bad day,” he said. “Opening Day was really kind of every single day for him.”

And even after having undergone cancer treatments at times over the last several years, Roberts still showed up at the ballpark. He never even mentioned the physical toll jobs like picking up cigarette butts took. He stocked bathrooms and cleaned up messes, interacted with fans and kept morale high among staffers. And there were days when Jones had to push Roberts away to keep him from doing tarp pulls.

“One of if not the most mentally tough human beings I’ve ever been around,” Klein said, an opinion made especially obvious in the late stages of Roberts’ battle.

Two weeks ago for his sendoff, Roberts, who had been physically weak, still sat for two hours in the heat to greet every person who snaked through the long parade. And in the days since then, West and Duff said, Roberts still was committed to being the same welcoming, entertaining person he always was.

Sunwall, perhaps, summed up Roberts’ legacy best: “He gave it his all.”

Column: Ronnie Roberts was a champion of dreams