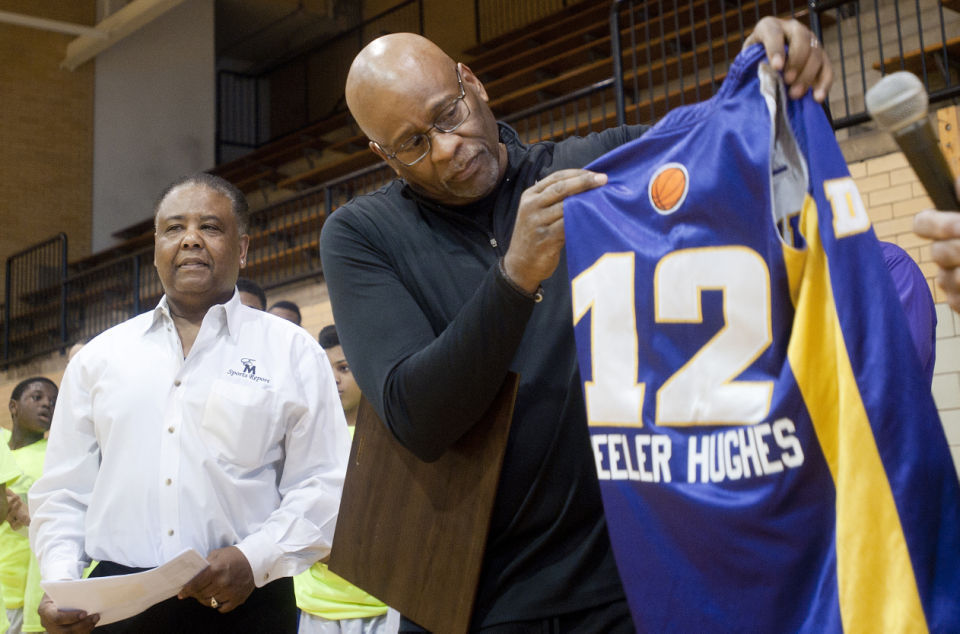 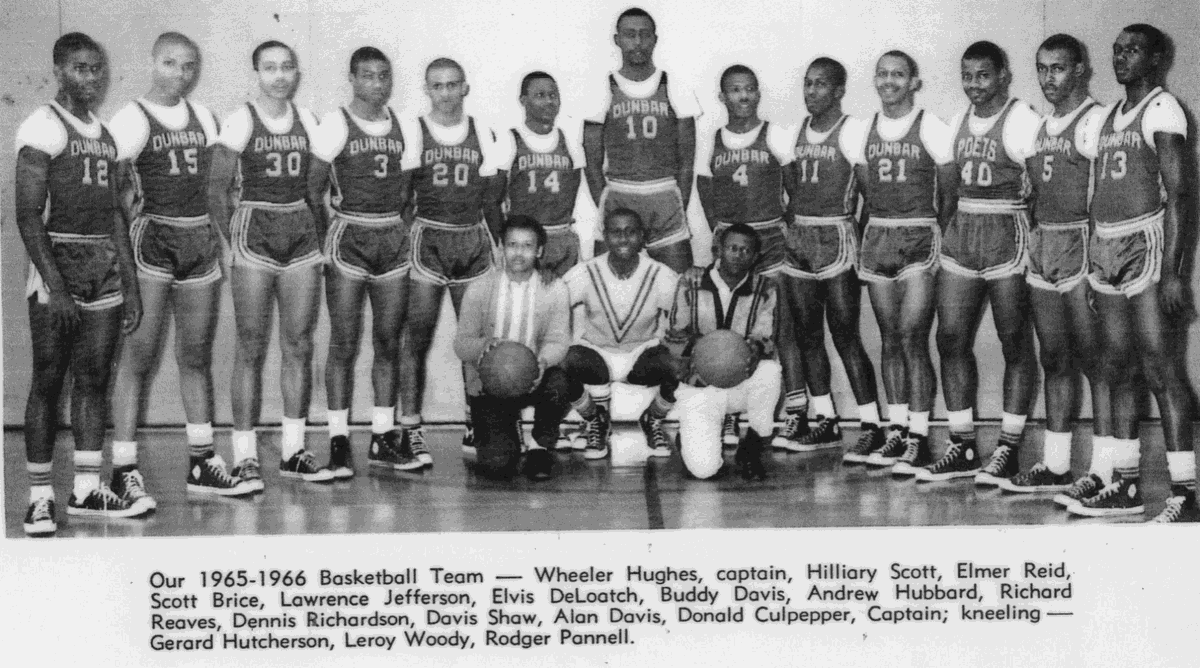 A picture of the 1966 Dunbar Poets basketball team. Wheeler Hughes (12) is standing on the far left. Donald Culpepper (13) is standing far right. 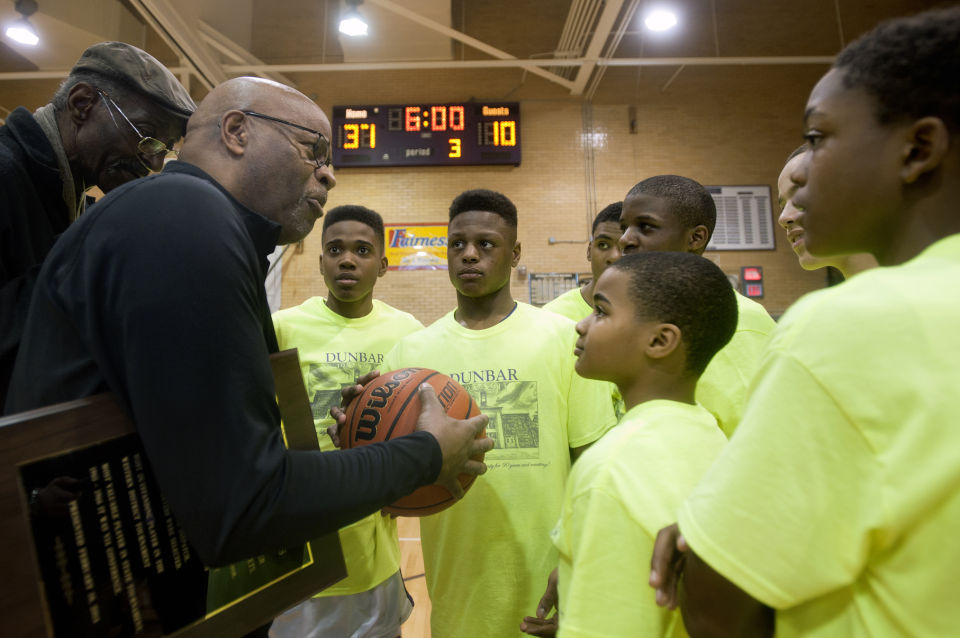 Wheeler Hughes (left) talks with a group of players in this 2014 photo. 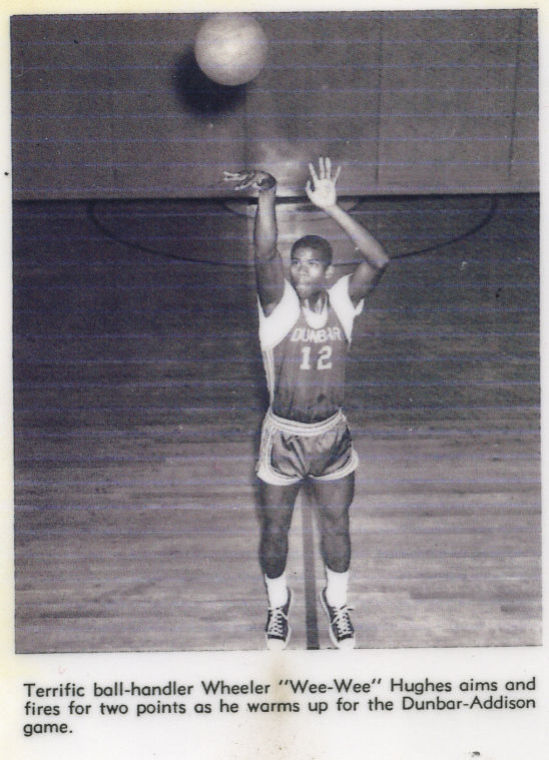 Wheeler Hughes warms up before a 1966 game.

A picture of the 1966 Dunbar Poets basketball team. Wheeler Hughes (12) is standing on the far left. Donald Culpepper (13) is standing far right.

Wheeler Hughes (left) talks with a group of players in this 2014 photo.

Wheeler Hughes warms up before a 1966 game.

Wheeler Hughes and Donald Culpepper weren’t just classmates on the same basketball team at Dunbar High School in the 1960s. They also were, and still are, exceptionally close friends.

So it’s fitting, then, that the duo, which wowed Lynchburg with a fast, daring style of play that was well before its time, will be inducted together into the Virginia Interscholastic Heritage Association Hall of Fame in June.

“What we did, we did together,” Culpepper, 71, said from his Detroit home on Wednesday.

And what they did together was remarkable. While some all-white teams played slow, half-court basketball predicated on close-to-the-rim hook shots and mid-range jumpers, Hughes and Culpepper stood apart as a different breed.

At the historically all-black Dunbar High, they had formed quite the one-two punch by 1966, the year the Poets won the Western District title and the Virginia Interscholastic Athletics’ state championship before advancing to the National Interscholastic Association championship in Montgomery, Alabama.

The Poets were an anomaly: instinctual, lightning quick, with play defined by pick-and-rolls, long outlets, no-look passes and smooth jumpers.

Hughes, the team’s best passer, averaged 24 points and 11 assists per game in ’66, his senior season. Culpepper averaged 29 points per game.

“I’d nod my head up and down and my teammates would know what to do,” Hughes said in a 2014 interview. “There was so much nonverbal communication that we played with.”

Hughes and Culpepper will be part of a 12-member class into the VIHA Hall of Fame, which is dedicated to preserving the legacy of athletes from historically black schools who competed in sports before, during and after desegregation.

Other members of this year’s class with ties to the Lynchburg area include Dr. Robert Johnson and Arthur Ashe.

Hughes also has been selected to the Virginia High School League Hall of Fame, the league announced Wednesday.

The 71-year-old Maryland native, who was the first black player selected as a first-team all-state performer for all Virginia high schools by the Richmond Times-Dispatch, will be inducted into the VHSL hall on Sunday, April 26 in Charlottesville along with 13 other new members, including former Virginia Tech football coach Frank Beamer.

The VIHA ceremony will be held Friday, June 26 at 5:30 p.m. Induction ceremonies for both halls will be held at the DoubleTree by Hilton Hotel in Charlottesville.

“The VIHA I was expecting, but the [VHSL] I wasn’t expecting at all,” Hughes said when reached by telephone Wednesday. “Kind of a shock. Kind of at a loss for words. It caught me off guard. I got a little speechless and had a few tears of joy.”

Hughes went on to a college career at Kansas State, where he played through 1970, and eventually went on to a successful career in healthcare.

Culpepper enjoyed a college career at Norfolk State, where he averaged 15.4 points per game. He spent 39 years with General Motors and has lived in Detroit since graduating from college.

On Wednesday, he recalled his lifelong friendship with Hughes.

And Hughes remembers a lot about how his friend played the game, too.

“He was, at the time, the best shooter around,” he said of Culpepper.

In the 1966 national semifinal, Culpepper scored 22 points, including the game-winning free throws, and Dunbar knocked off Jackson, Mississippi-based Lanier High, which was the defending national champ.

But he fouled out in the third quarter of the national title game, and Dunbar lost to Coleman, from Greenville, Mississippi.

“I had never fouled out of a high school game in my life,” he said.

“High school, those are the memories that you never forget, because of the friendship,” Culpepper said. “That’s what kept us together: friendship and basketball.”

Being selected into the VIHA Hall of Fame, Culpepper added, “is a very dubious honor.”

Hughes, who led the Western District in scoring at 21.8 points per game his junior season, had his No. 12 high school jersey retired at Paul Laurence Dunbar Middle School for Innovation in 2014, where he talked with middle school players after the game.

After that ceremony, Otis Tucker Jr., a 1958 Dunbar grad and assistant coach on the ’66 team, talked about Hughes. His statement showed in what high regard athletes like Hughes and Culpepper were held in the black community during a time when white teams like E.C. Glass refused even to scrimmage Dunbar and this newspaper shunned the Poets from its pages.

“I’ve never heard anybody say anything bad about him,” Tucker said. “It sounds too good to be true, but they don’t come around very often, and especially this day in time. Hopefully the young people can use him as an example and be like him.