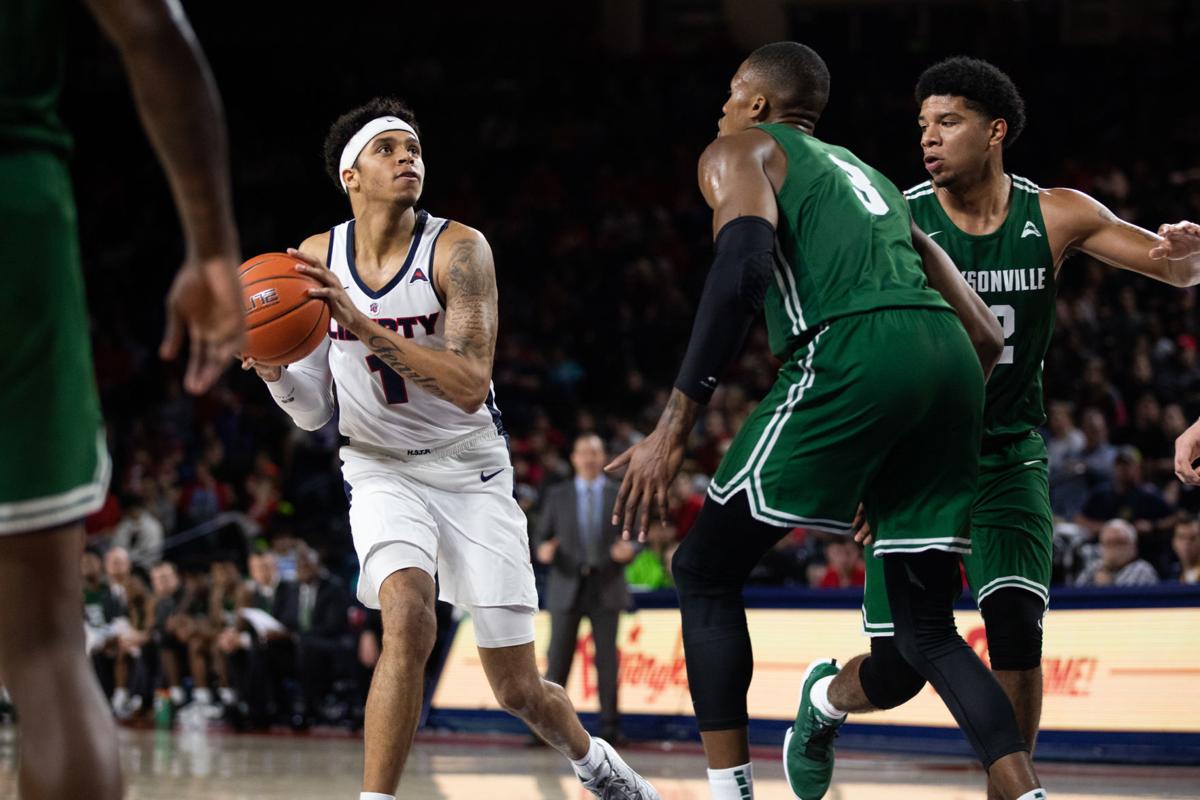 Liberty guard Caleb Homesley looks to shoot during a game against Jacksonville on Saturday, Jan. 11, 2020 at the Vines Center. 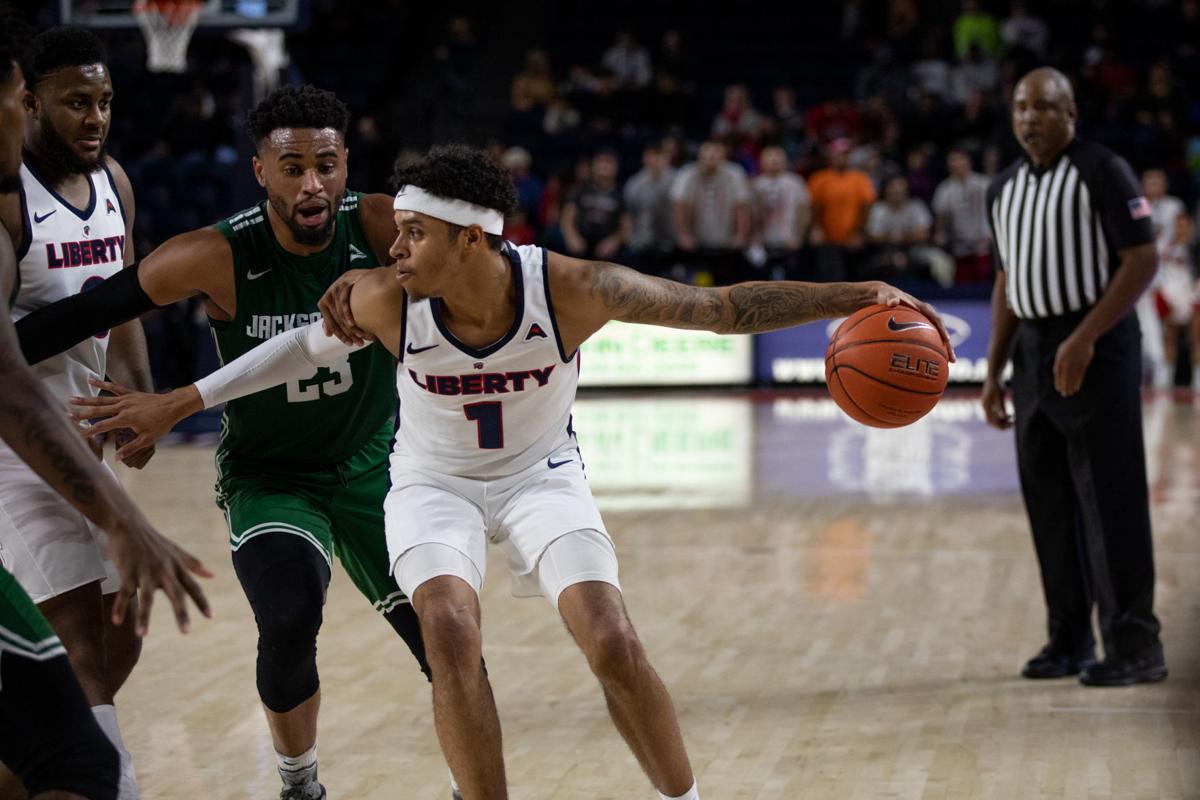 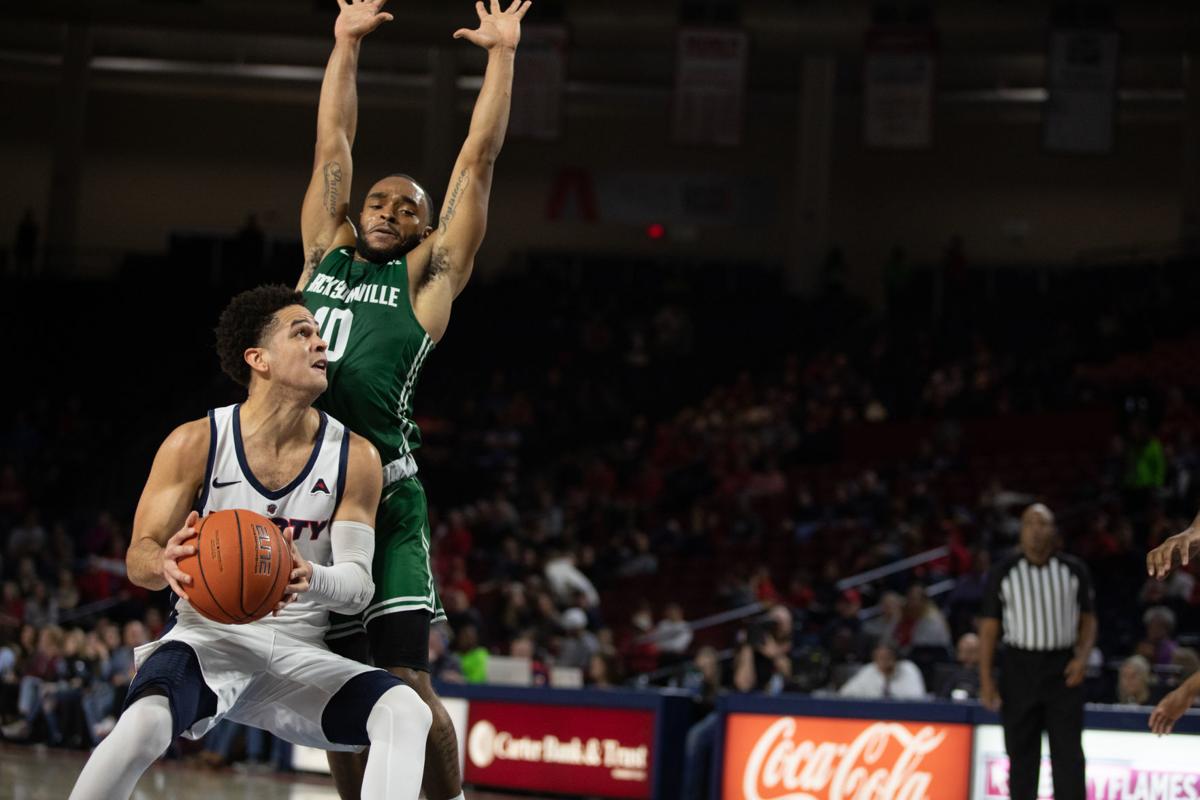 Liberty guard Georgie Pacheco-Ortiz drives to the basket as Jacksonville guard Aamahne Santos defends during a game Saturday, Jan. 11, 2020 at the Vines Center. 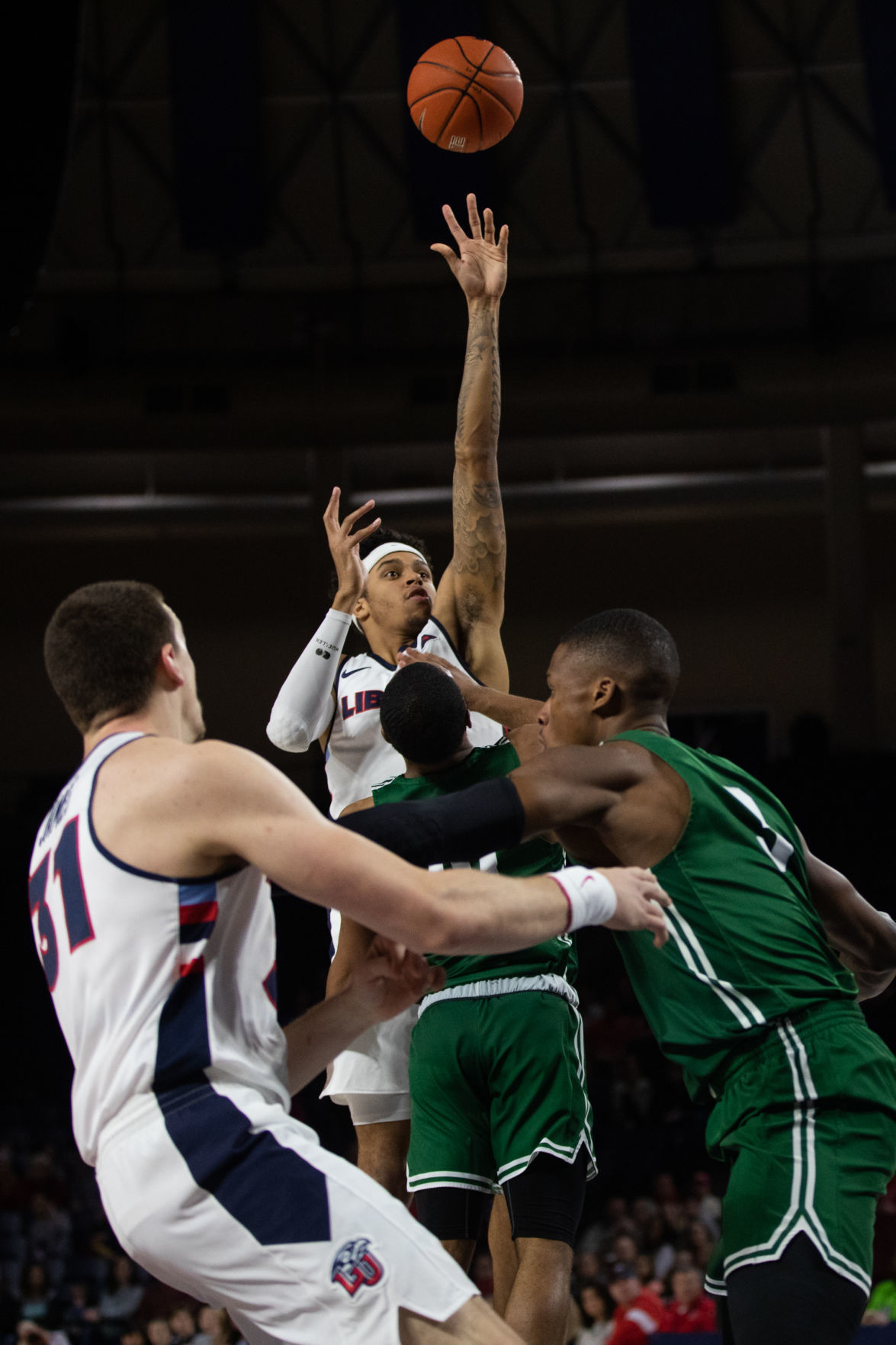 Liberty guard Caleb Homesley releases a floater during a game against Jacksonville on Saturday, Jan. 11, 2020 at the Vines Center. 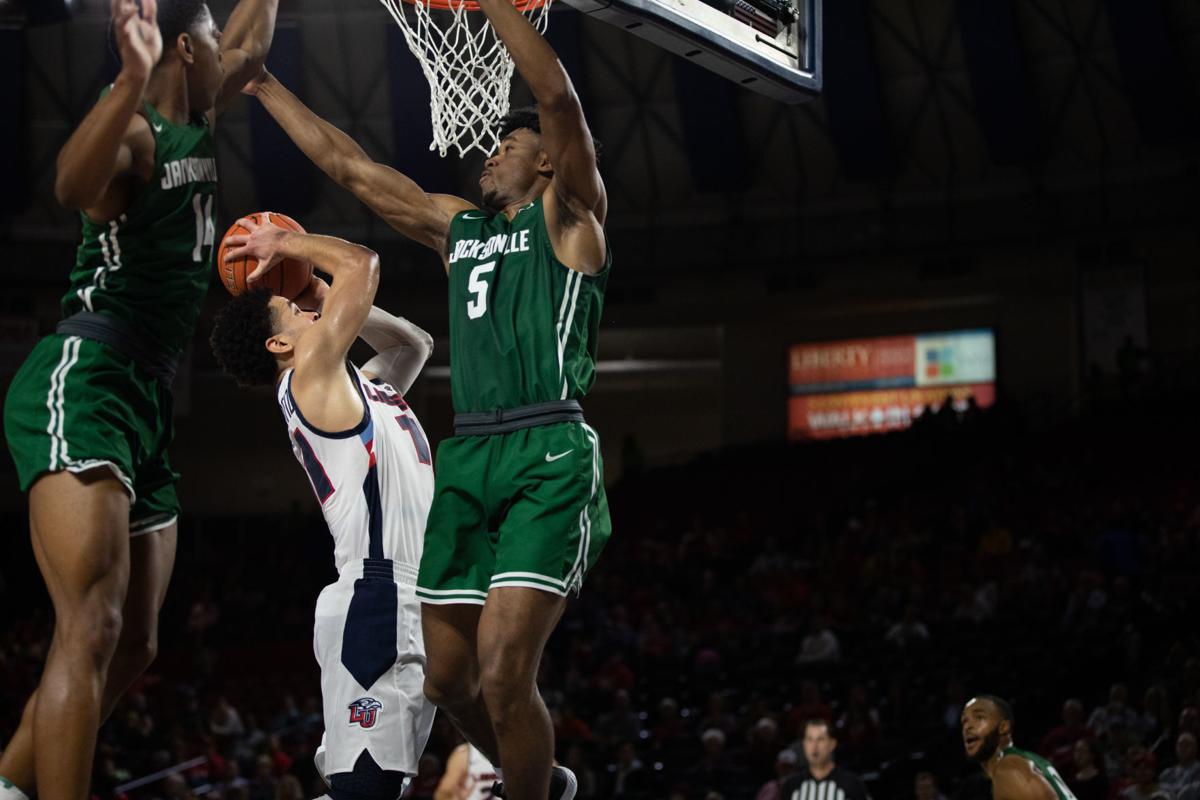 Liberty guard Georgie Pacheco-Ortiz during tries to shoot over Jacksonville guard DeAnthony McCallum (5) during a game Saturday, Jan. 11, 2020 at the Vines Center.

Liberty guard Caleb Homesley looks to shoot during a game against Jacksonville on Saturday, Jan. 11, 2020 at the Vines Center.

Liberty guard Georgie Pacheco-Ortiz drives to the basket as Jacksonville guard Aamahne Santos defends during a game Saturday, Jan. 11, 2020 at the Vines Center.

Liberty guard Caleb Homesley releases a floater during a game against Jacksonville on Saturday, Jan. 11, 2020 at the Vines Center.

Liberty guard Georgie Pacheco-Ortiz during tries to shoot over Jacksonville guard DeAnthony McCallum (5) during a game Saturday, Jan. 11, 2020 at the Vines Center.

Liberty’s evolution in the pack-line defense has taken a considerable step this season.

The Flames, over the course of the previous four seasons, steadily wore down opponents and took advantage of mistakes down the stretch to win by comfortable margins.

The progress in this campaign has come in Liberty’s ability to deliver a knockout blow earlier in the contest through an efficient offense preying on its opponents’ undisciplined possessions.

Take, for example, Saturday evening’s 54-37 victory over Jacksonville: The Flames used a five-possession stretch in the early stages of the second half to extend their lead to 20 points and in the process broke the Dolphins’ will before an announced crowd of 4,299 at the Vines Center.

“I don’t think they get enough credit for how good they are on offense,” Jacksonville coach Tony Jasick said of Liberty. “I think that when you make a mistake, both offensively and defensively, they’re going to capitalize on the offensive end.”

The game-defining run came in a three-minute stretch after David Bell converted on a second-chance opportunity to trim the Dolphins’ deficit to 29-19 with 15:29 remaining.

The Flames (18-1, 4-0 ASUN Conference) scored on four of their next five possessions — highlighted by Darius McGhee scoring eight of his team-high 14 points during the stretch — to take a 39-19 lead following Myo Baxter-Bell’s layup with 12:37 remaining.

“We cut it to 10 in the second half, and then we got so undisciplined,” Jasick said. “The second you do that, you’re in trouble.”

The Dolphins (8-10, 1-2) couldn’t cut into the deficit with Liberty focused on finishing the game strong.

The Flames failed to put away North Alabama on Thursday night and needed a late second-half run to win by double digits. Saturday night, Liberty’s lead never dipped below 14 points as the Flames held the Dolphins to a season-low 37 points.

“I think we all knew we didn’t play our best last game, and we just tried to come with intensity on the defensive end especially and make it hard for them,” Liberty senior point guard Georgie Pacheco-Ortiz said. “We did a pretty good job playing great defensive tonight.”

Liberty is allowing 51 points per game and sits second in the nation in scoring defense behind Virginia (48.7). The Flames have held two of their last three opponents to less than 40 points.

“I think we’re close. I think we’re good defensively. I think we can get better,” Flames coach Ritchie McKay said. “Brad Soucie, our associate head coach, has done a really good job of owning the details of it, and I feel like our guys have really made a commitment to executing those details.

“I see it from the lens of UVa’s defense, and having been there for so long and following them and obviously having such a relationship with Tony [Bennett] and his dad, I know that there’s more for us. We can be better.”

Liberty overcame a lethargic start to the second half (1 of 6 from the field) to shoot 50% over the final 20 minutes.

The Flames’ two leading scorers, Caleb Homesley and Scottie James, combined for 14 points on 7-of-17 shooting and 16 rebounds.

“Again, it makes you hard to guard because you have some weaponry on the offensive end,” McKay said.

The Flames used a renewed defensive intensity in a sterling opening 20 minutes to build a 27-12 halftime lead.

It marked the ninth time this season the Flames have held an opponent to less than 20 points in a half. The 12 points were the fewest the Dolphins have scored in a first half this season.

Jacksonville shot 5 of 26 from the field and missed its six 3-point attempts. Liberty turned the Dolphins’ five turnovers into nine points.

The Dolphins opened the game shooting 1 of 12 from the field, and the Flames took advantage by building a 16-2 lead behind eight points from Pacheco-Ortiz.

JU center David Bell posted game highs of 16 points and 13 rebounds. He pulled down six of the Dolphins’ 13 offensive rebounds and was responsible for nine of the team’s 12 second-chance points.

Diante Wood came off the bench for the Dolphins and scored 10 of his 13 points in the second half.

“I thought our guys were really good defensively today. I think Jacksonville’s a really good team, and [we] played both ends of the floor with a lot of discipline in a nice spirit of execution,” McKay said. “Really good job for us. Our first-shot defense was terrific. If there’s an area that I thought we could have been better, it was our defensive glass. We’re usually pretty good, but David Bell and others are a load. Happy to come out with a win.”