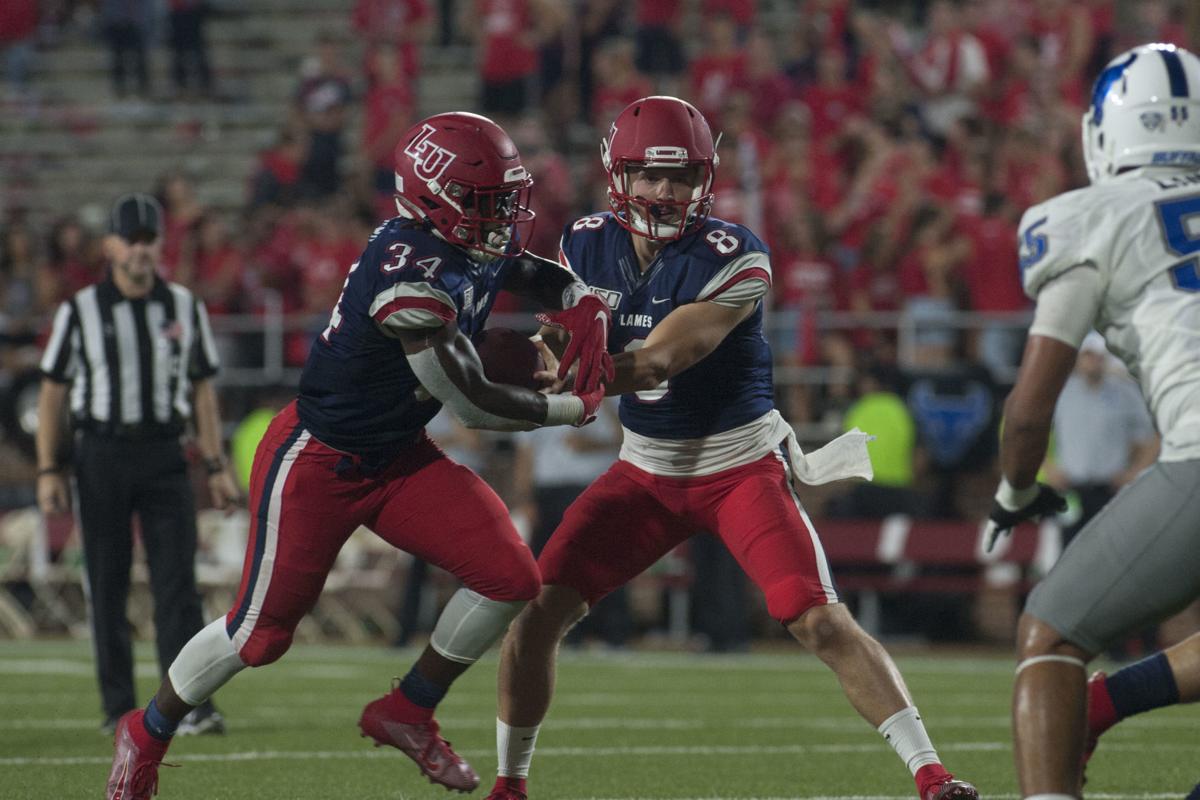 Liberty quarterback Landon Brown hands the ball off to running back Joshua Mack during the Flames' win over Buffalo on Saturday, Sept. 14, 2019 at Williams Stadium. 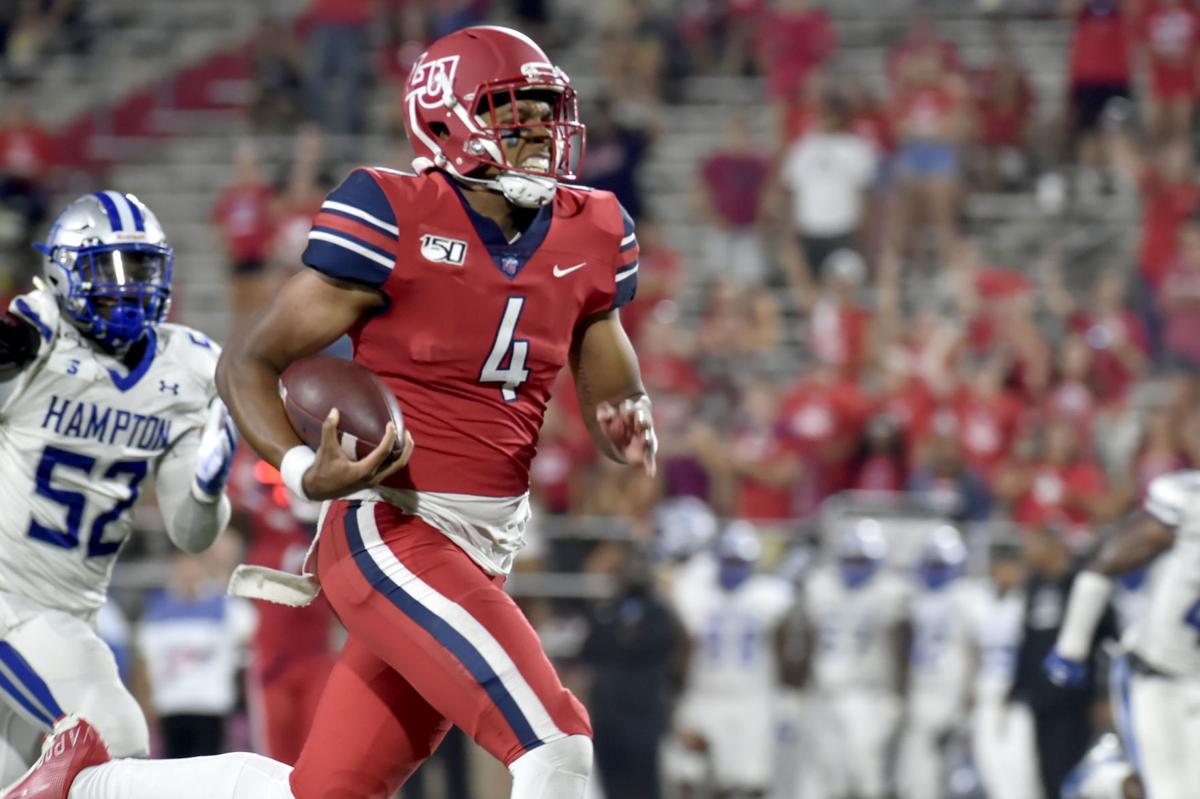 Liberty quarterback Brandon Robinson carries the ball during the Flames' win over Hampton at Williams Stadium on Saturday, Sept. 21, 2019.

Liberty quarterback Landon Brown hands the ball off to running back Joshua Mack during the Flames' win over Buffalo on Saturday, Sept. 14, 2019 at Williams Stadium.

Liberty quarterback Brandon Robinson carries the ball during the Flames' win over Hampton at Williams Stadium on Saturday, Sept. 21, 2019.

Brandon Robinson’s role took on a different aspect last week when the Liberty football staff added him as the quarterback option in tight red zone packages. The thought was he adds a running dimension with his 6-foot-4, 215-pound frame and forces opposing defenses to prepare for him if the Flames were at the goal line.

The redshirt freshman’s workload is increasing this week to add the passing element following Johnathan Benett’s season-ending injury suffered in a freak accident during this past weekend’s victory over Hampton. Robinson is listed as the backup quarterback to entrenched starter Buckshot Calvert heading into Saturday’s game against New Mexico.

Robinson, though isn’t the only quarterback expected to receive more opportunities during this week’s practices.

Flames coach Hugh Freeze said Monday he plans on having redshirt sophomore Landon Brown get more chances in practice, while also allowing Robinson to prove he can be more than just the team’s goal-line option.

“We’ll start experimenting with that this week, kind of where we are. As we start sharing the No. 2 reps, we’ll see how Landon and Pop [Robinson’s nickname] do,” Freeze said. “It’s all about competition, you’ve got to earn it, and if those two do well, that’s probably where we’ll start. If those two don’t do well, it’s next man up in my mind, and we’ve got to go see who that is. I wouldn’t count anybody out of being in the quarterback rotation.”

The roster includes two other quarterbacks in redshirt junior Henry Van Dellen, who transferred to Liberty after playing briefly in 2017 with North Dakota State, and true freshman walk-on Will Bowers.

Van Dellen completed 4 of 9 passes for 27 yards as a redshirt freshman with the Bison.

Brown has been the team’s holder on extra points and field goals since the beginning of the 2018 season, and he finally got in on offense in each of the past two weeks. His responsibility in those games has been to hand the ball off to either Joshua Mack (against Buffalo) or Frank Boyd (against Hampton) to run the final minutes off the clock.

“I don’t think preparation is going to change a lot for me. I try to stay as concurrent as I can be as far as being ready and staying engaged,” the 6-foot-1, 210-pound Brown said. “I mean, it is an opportunity, and if called upon, I want to put our offense in the best position possible just to be efficient. Our thing is to be a fundamentally efficient scoring machine. I think that’s the ultimate goal. If we can facilitate from the quarterbacks’ room efficient play on the field, I think that answers that.”

Robinson shined for the Flames (2-2) in the second half against Hampton by picking up 103 of his game-high 105 rushing yards, highlighted by a 75-yard touchdown scamper on a third-and-20 play early in the fourth quarter.

He only attempted two passes against the Pirates. The first fell incomplete after he was hit during the throw, and a completion to backup wide receiver Brody Brumm was called back for an illegal receiver downfield penalty.

“For the last week I was more prepared to run, but this week is going to change a lot,” Robinson said. “I’ll probably get a lot more throws in, a lot more passing reps, so I’ll just be more ready in that aspect passing-wise.

Freeze’s plan is to still have Robinson be the goal-line option quarterback, which will force opposing defenses to spend time preparing for that particular package.

The Flames showed the package can be effective when Robinson scored on a 2-yard run in the first quarter against Hampton. It was Robinson’s first collegiate play, and the subsequent celebration is when Bennett suffered a patella tendon rupture when his left knee buckled after landing on the Williams Stadium turf.

“My plan for [Robinson] was not to be the backup quarterback but to be our changeup in run game to add an additional gap that they have to work for every week in defending in quarterback runs, which I thought he has a little knack for,” Freeze said. “Now, you’ve got to look at that and say now I’ve got to get Landon ready to be the backup.

“I don’t want to say that Pop’s not the backup, but I’ve got to prepare another guy because we’re going to run [Robinson]. We’re going to make ourselves as difficult to defend as possible and I know the hours you have to spend as a defensive coach saying, ‘Oh my gosh, now we’ve got to also defend the plus-one runs because they’ll do that, too. Now that takes time out of practice.’ So I’ve got to get both of those kids ready to be our backup, if that makes sense.”