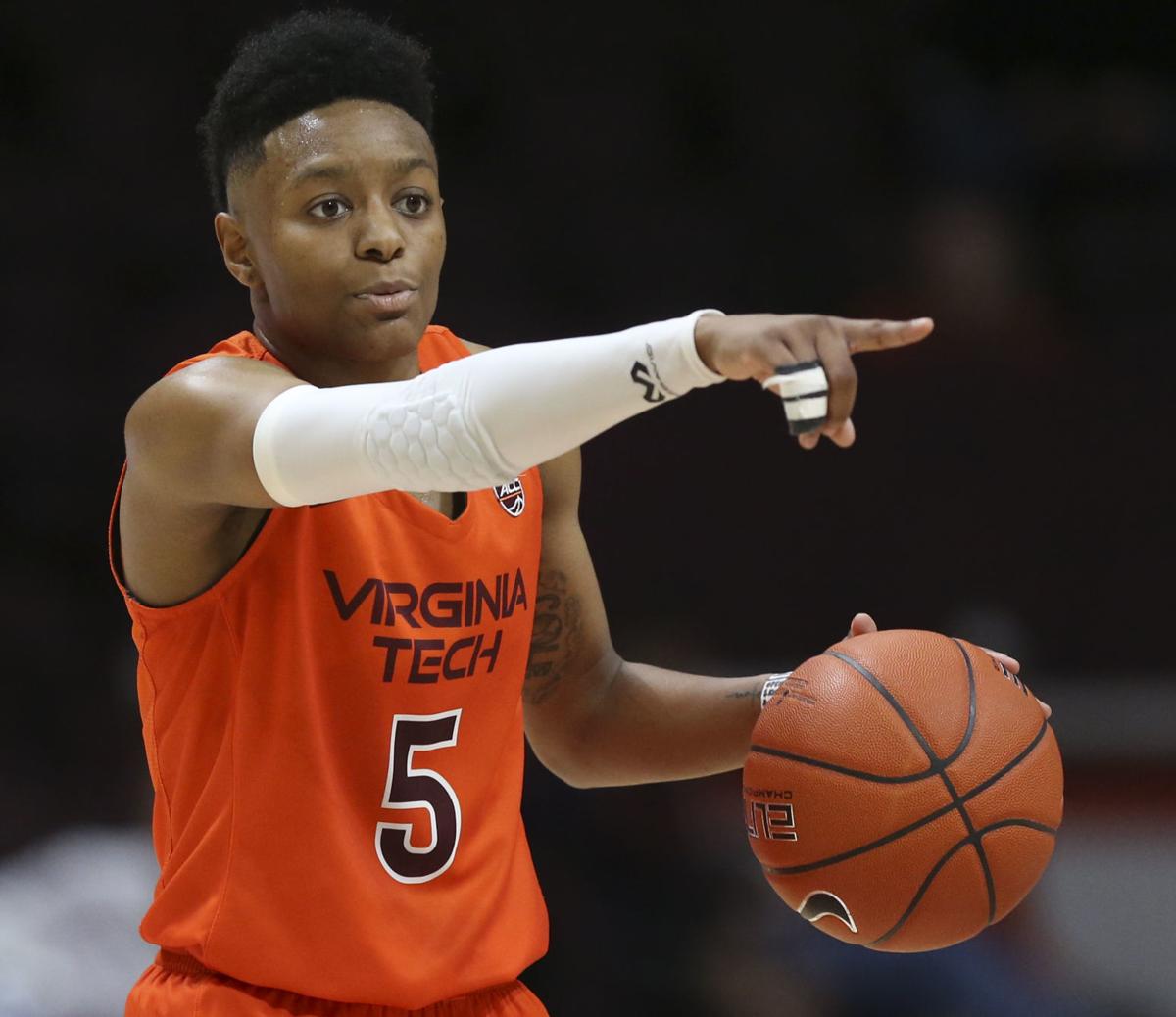 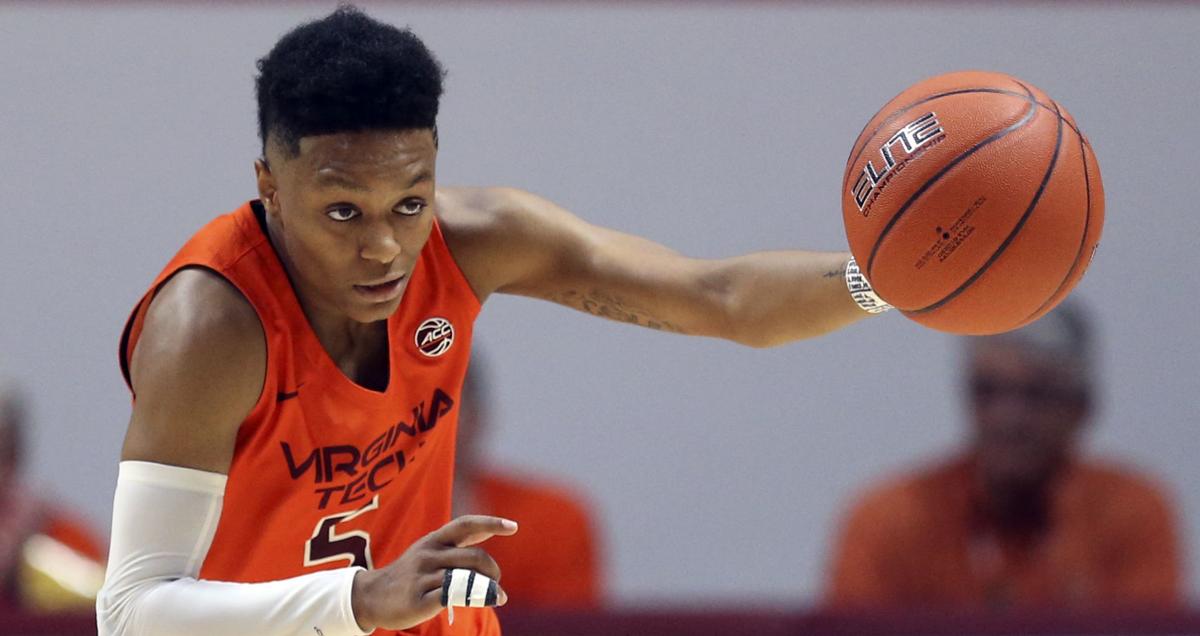 Taja Cole of Virginia Tech averages 9.5 points and 6.3 assists for the Virginia Tech women's basketball team, which is tied for fourth place in the ACC. 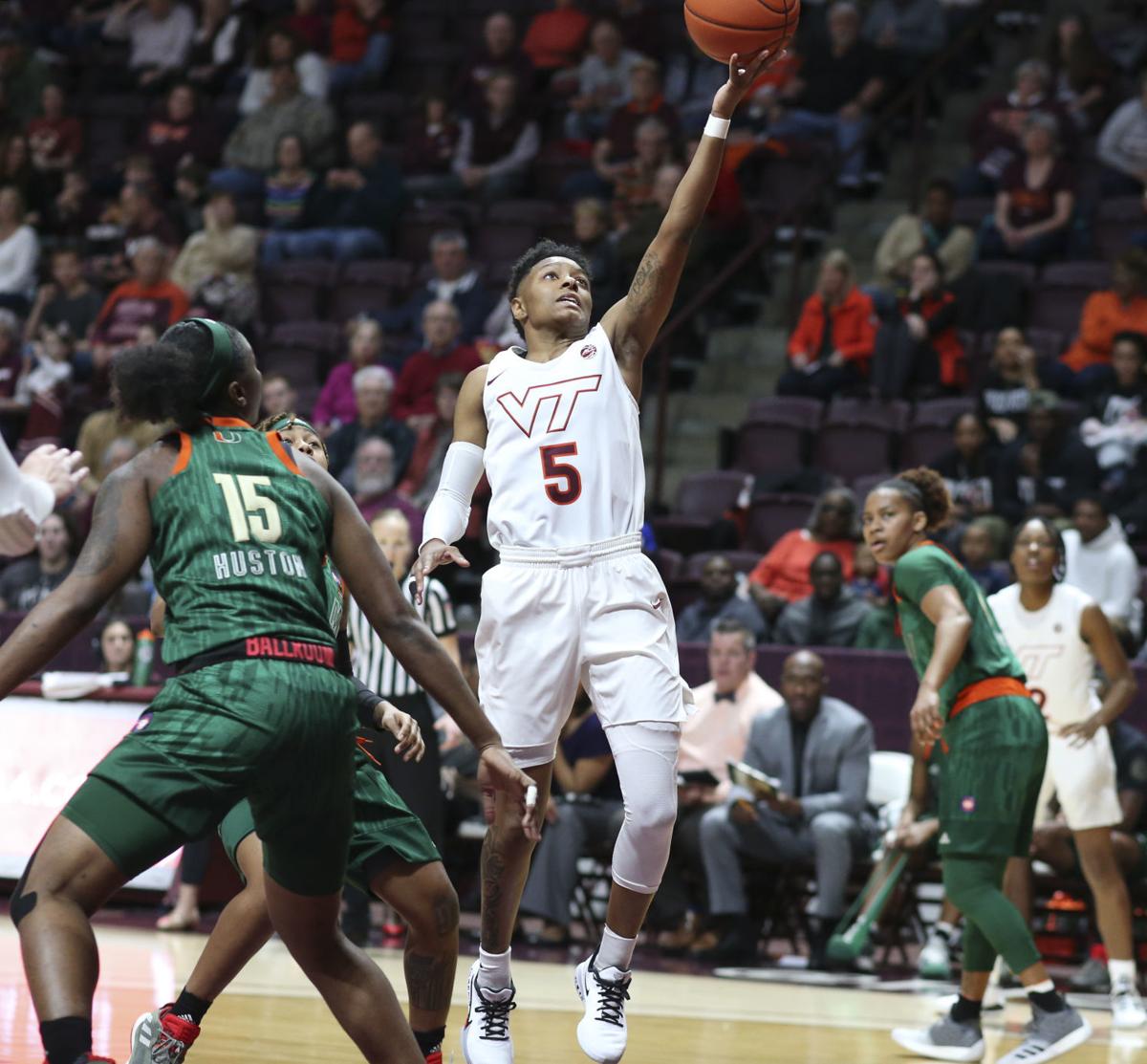 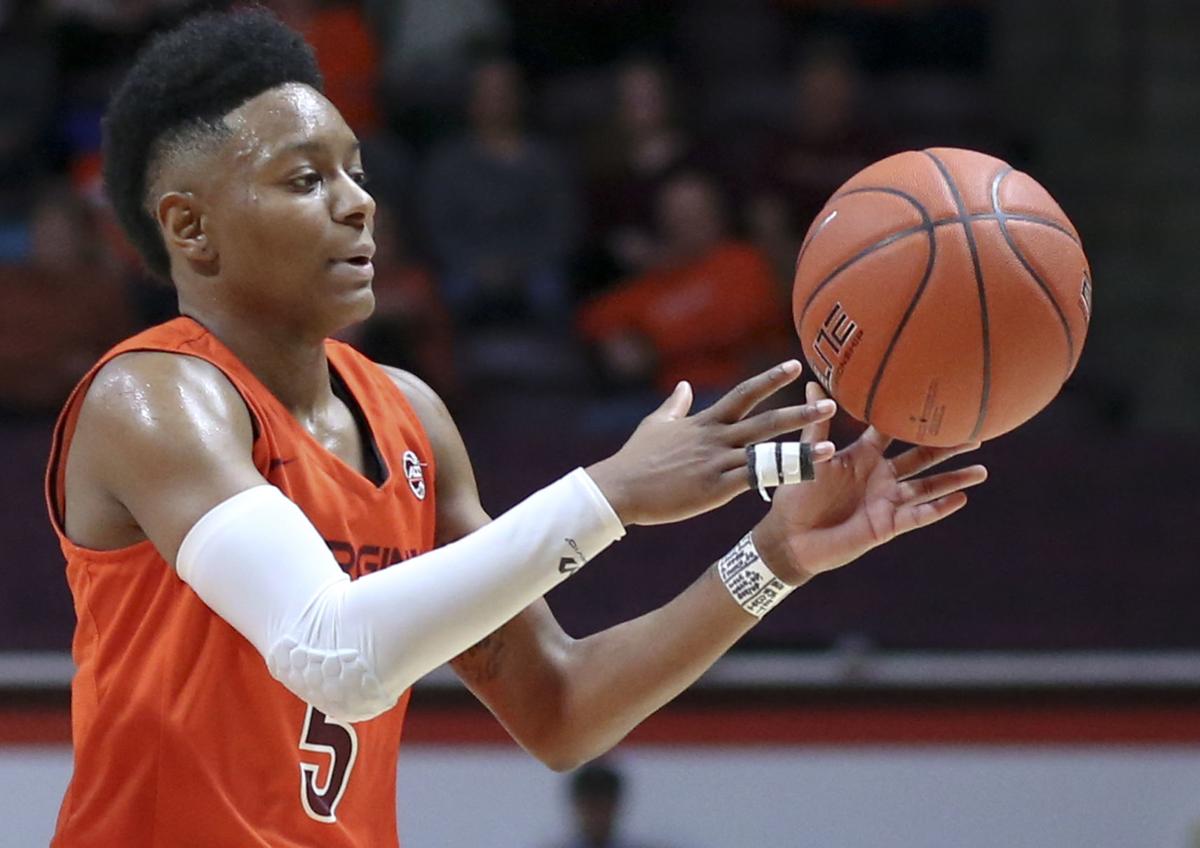 Taja Cole of Virginia Tech has dished out nine assists in three of the past five games. The graduate transfer ranks fifth nationally with 146 assists. 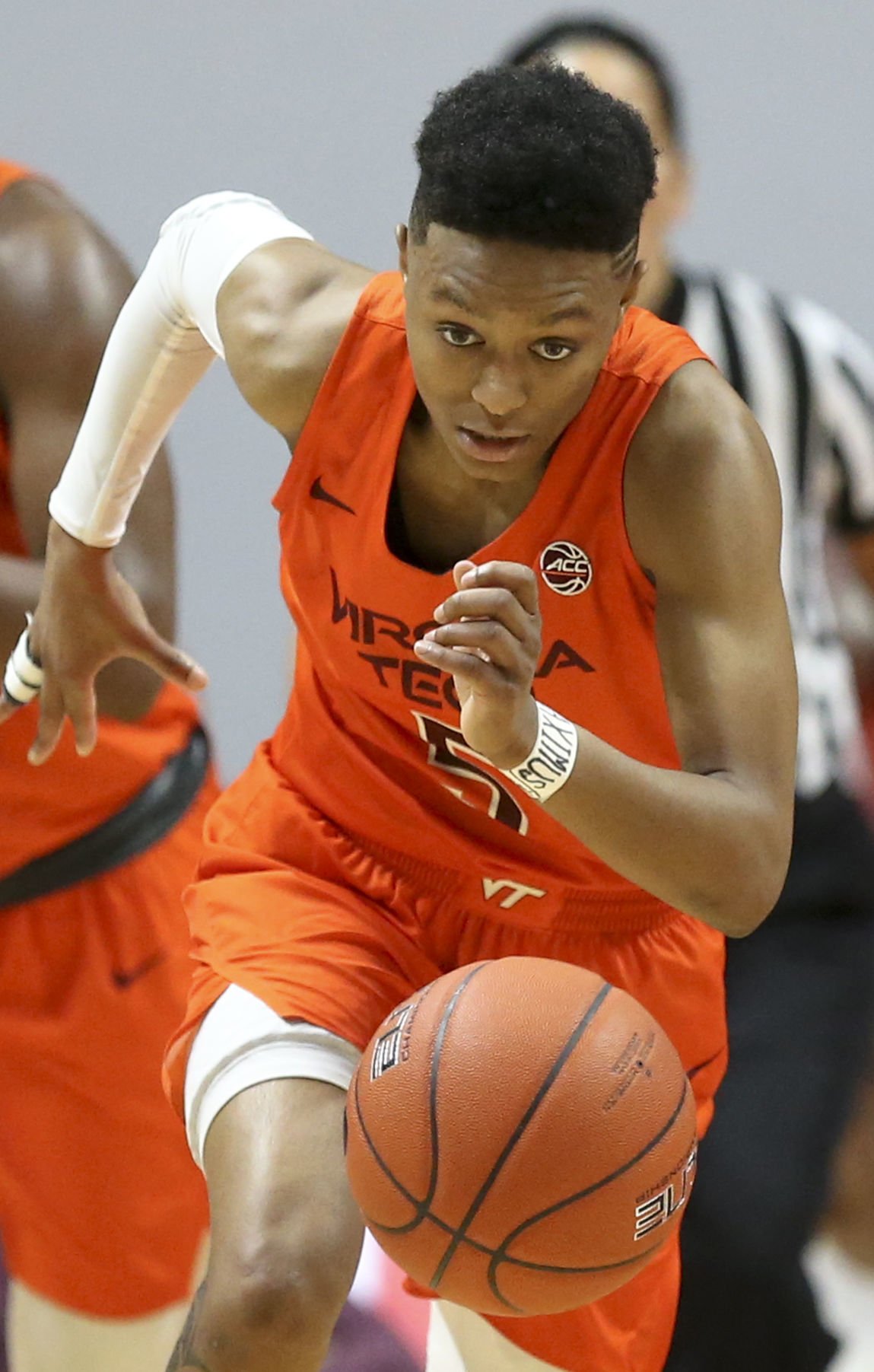 Virginia Tech's Taja Cole, shown chasing down the ball to start a fast break, has started every game for the Hokies. The speedy point guard has helped Tech win seven ACC games — the most ACC wins in the program's history. 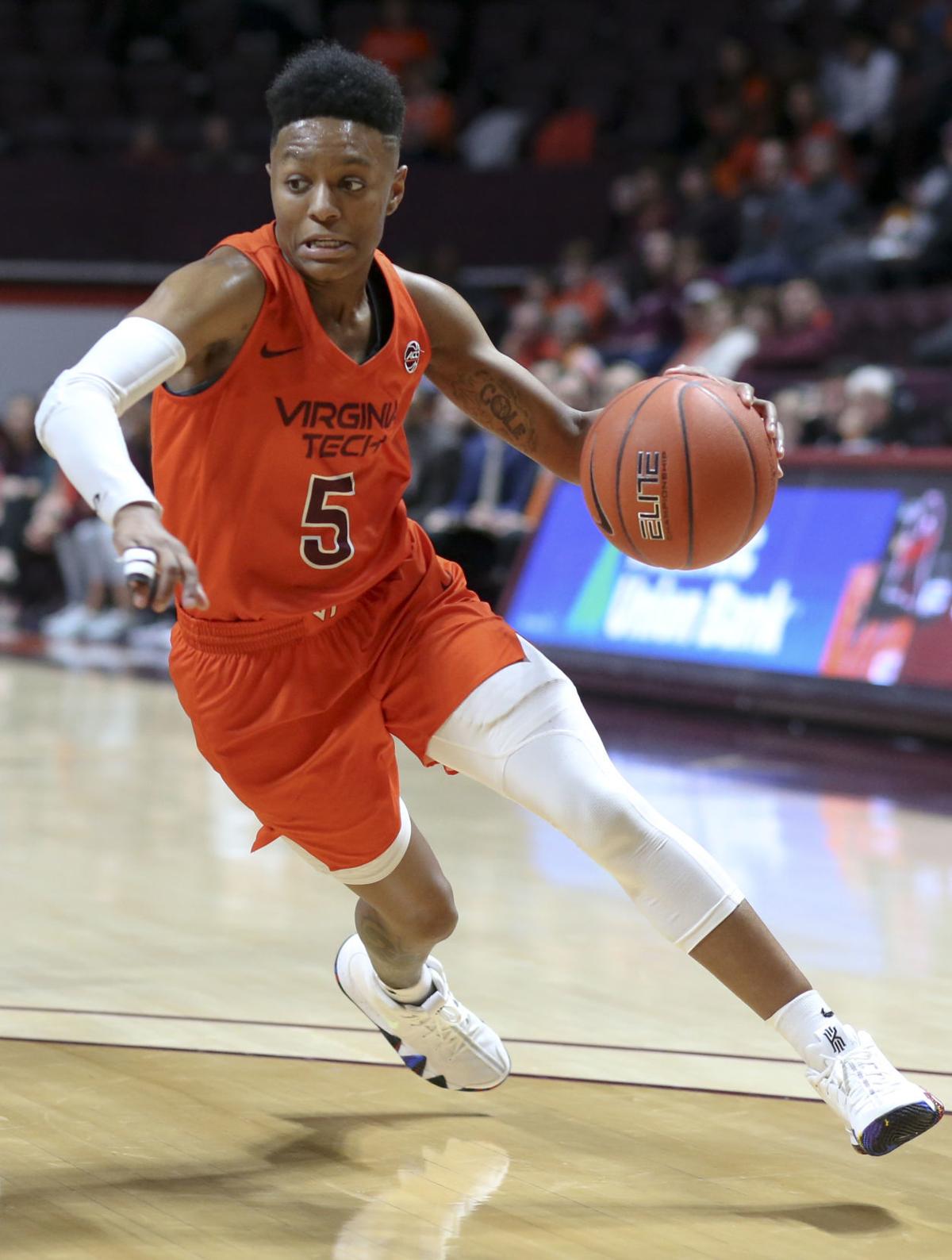 Graduate transfer Taja Cole averages 9.5 points and 6.3 assists for the Virginia Tech women's basketball team. This is her third college, following stints at Louisville and Georgia. 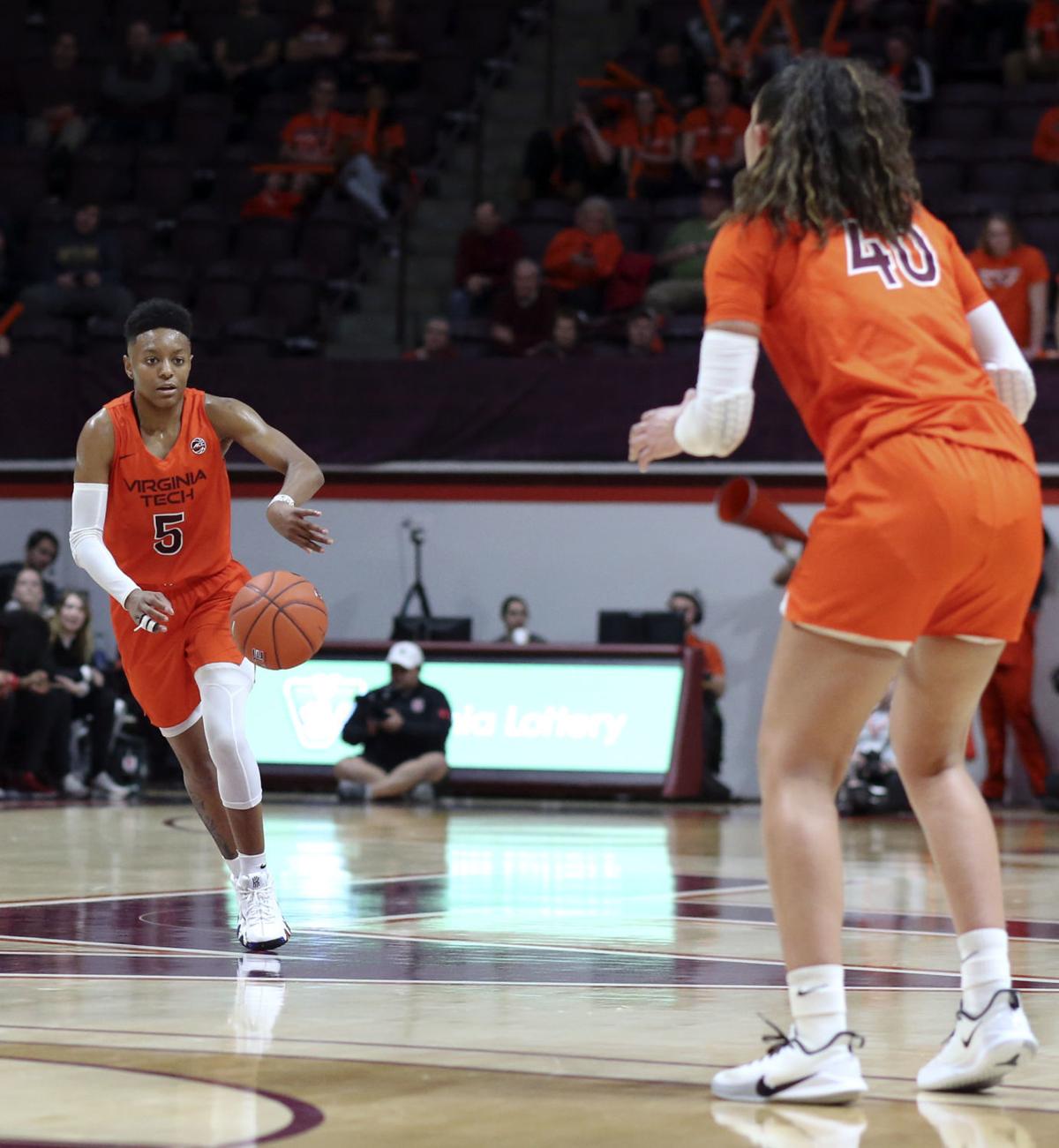 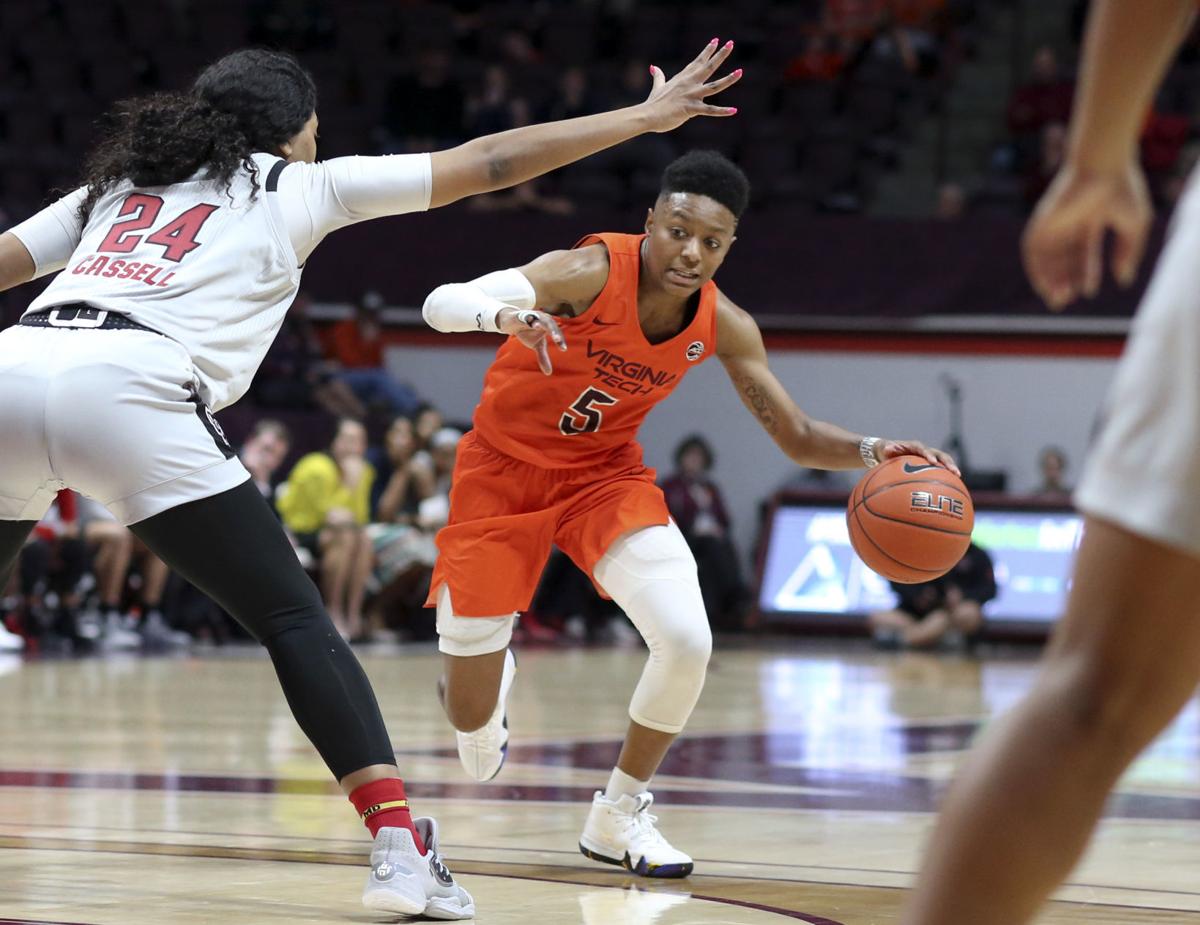 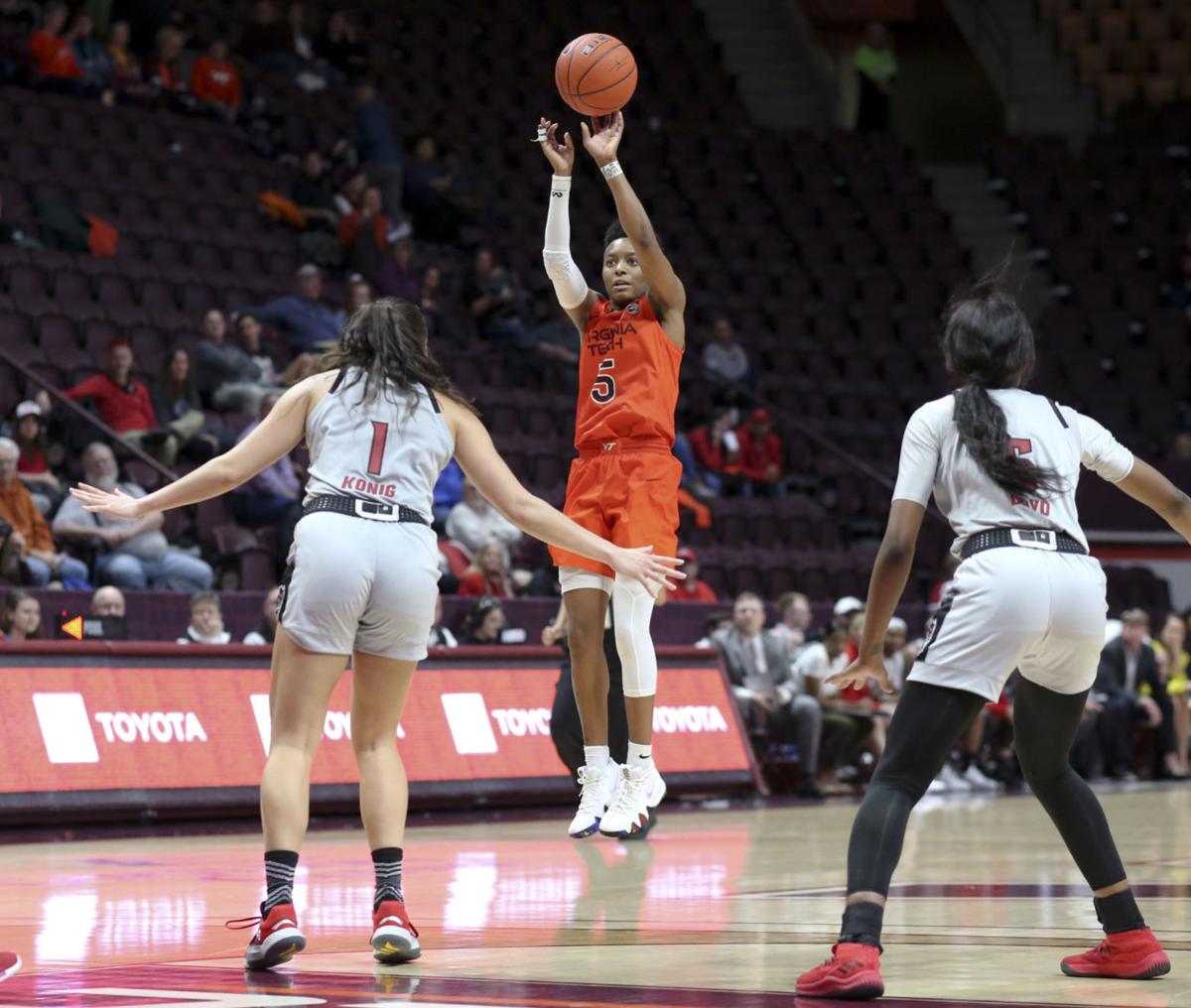 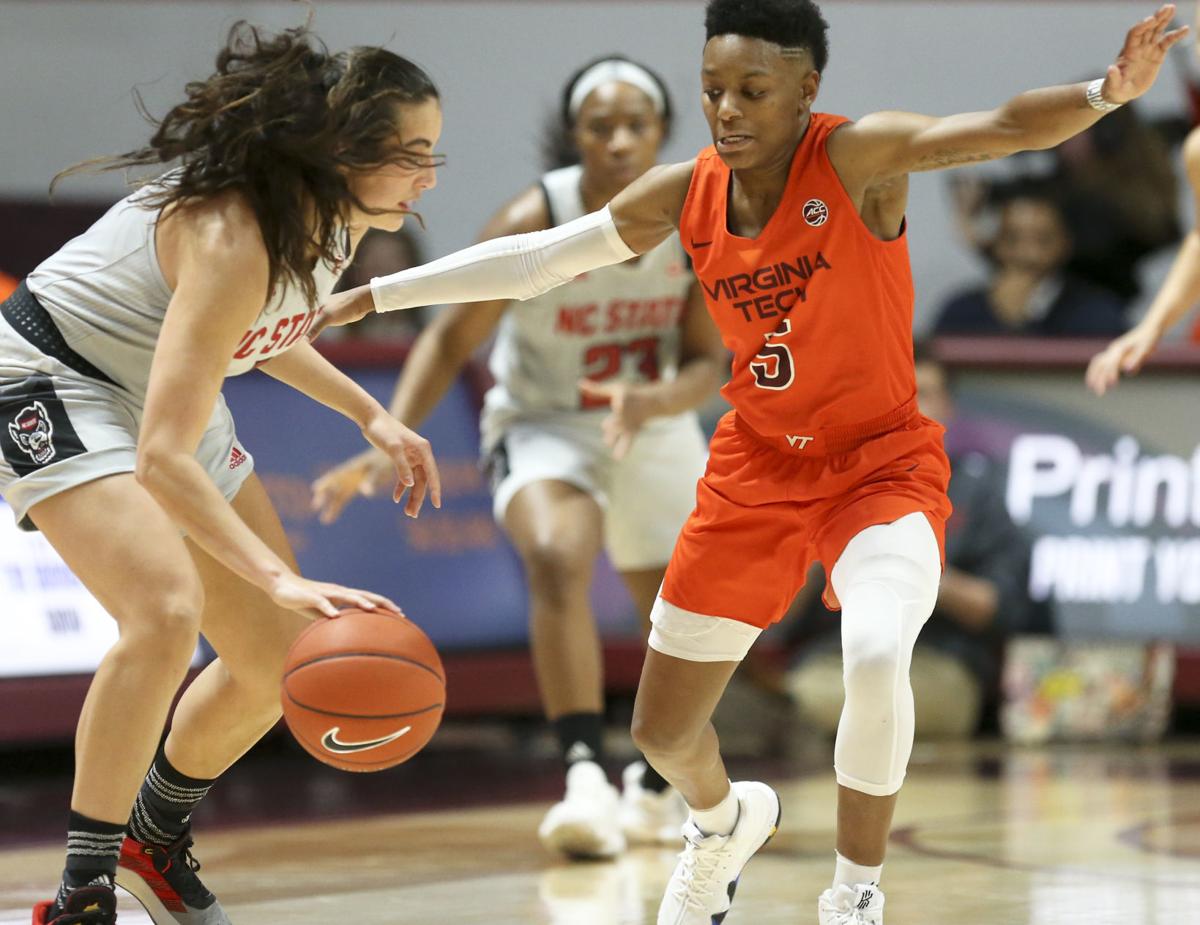 Taja Cole of Virginia Tech averages 9.5 points and 6.3 assists for the Virginia Tech women's basketball team, which is tied for fourth place in the ACC.

Taja Cole of Virginia Tech has dished out nine assists in three of the past five games. The graduate transfer ranks fifth nationally with 146 assists.

Virginia Tech's Taja Cole, shown chasing down the ball to start a fast break, has started every game for the Hokies. The speedy point guard has helped Tech win seven ACC games — the most ACC wins in the program's history.

Graduate transfer Taja Cole averages 9.5 points and 6.3 assists for the Virginia Tech women's basketball team. This is her third college, following stints at Louisville and Georgia.

As a child, Cole was the only girl on her flag football team. She liked playing running back, having the ball in her hand.

But when it was time for her to move up to tackle football, her parents switched her to basketball.

Cole is now the starting point guard for the Virginia Tech women’s basketball team. But she still loves football.

“I view basketball in a football mentality,” she said. “Everything I know from a basketball standpoint, from my speed to the moves I make, it’s all from football.”

Just like a quarterback, Cole writes Tech plays on a wristband that she wears during games.

“Their ability to get their team to do what they want them to do and … make their teammates look great and make themselves look good at the same time is something I try to do every night,” she said.

Tech coach Kenny Brooks uses football terms when he talks with Cole, such as likening her relationship with her teammates to a quarterback’s relationship with offensive linemen. When Cole plays defense, Brooks asks her to get in passing lanes like a safety.

Virginia Tech is the third college stop for Cole, who has already been a part of NCAA tournament teams at Louisville and Georgia. Now she’s hoping to help the Hokies reach the NCAAs for the first time in 14 years.

“My job is to lead this team to success,” she said. “I think I do a good job of setting my teammates up and putting them in the right positions to be successful.”

Cole has her father’s last name, but she said he is “not really” in her life. She was raised by her mother and stepfather.

She lived in Richmond and Henrico County before the family moved to Chesterfield County when she was still in grade school. Her mother, Star Wills, is the girls basketball coach for Life Christian Academy in Chesterfield.

When an 8-year-old Cole helped a 10-and-under AAU team win the Commonwealth Games in Roanoke, her mother and stepfather realized she had a passion for basketball.

Cole’s life was touched by tragedy 10 years ago. Her paternal half sister Jacobie Moran died from a blood clot in her lungs one day after giving birth. She was 22 years old.

“It was kind of like that Kobe Bryant feeling now, where everybody’s like, ‘Did that really happen?’ ” Cole said. “Now I use it as motivation. I’ve got a younger nephew that I’ve got to set an example for.

“He calls me all the time. He sees that I’m this basketball player, and I want to show him he can do anything he wants to do.”

Cole writes the date of her sister’s death on her basketball shoes.

“She would worry about everyone but herself. I kind of take on that, too,” she said. “Her big heart is motivation to me. It makes me realize this game is bigger than me.”

Cole blossomed into a standout at Lloyd C. Bird High School. She was named the Gatorade state player of the year as a high school senior, when she averaged 19.0 points, 5.3 assists and 3.5 steals. She had 1,520 points and 553 assists in her high school career.

“The team started looking up to her because she led by example,” Lloyd C. Bird coach Chevette Waller said. “She became a coach on the floor.”

Cole scored 13 points in the 2015 McDonald’s All-American Game. She was the co-MVP in the Jordan Brand Classic, reaping a pair of Air Jordans from Michael Jordan himself.

“She came home for Christmas and … said that she didn’t want to be there anymore, … that she just didn’t like it at all,” her mother said.

Cole opted to transfer after her freshman season. She said playing time was not the issue.

“Things that I was looking for and how [coach Jeff Walz] wanted me to play … just didn’t jell,” she said.

She transferred to Georgia, where she averaged 7.8 points and 4.1 assists as a third-year sophomore in the 2017-18 season. She started every game that year, helping the Bulldogs make the NCAAs.

She decided to move on for graduate school, though.

“I had a great time at Georgia,” she said. “They didn’t have exactly what I was looking for … from an academic standpoint [for graduate school].”

She picked Virginia Tech over Kansas State, opting to return to the commonwealth. Her mother and stepfather have been able to attend a number of Tech’s home and road games this season.

Cole, who is taking graduate courses in leadership, liked the fact that she can get a Tech master’s degree in just one year.

She is interested in fashion design, and dreams of working for Nike one day. She has an internship at Joba, the design firm that is run by former Tech running back Kevin Jones.

Cole’s return to the state has worked out quite well. The Hokies are 17-6 overall and are tied for fourth place in the ACC with a 7-5 league mark. They have broken the program record for the most ACC wins in a season.

“I just wanted to give this program … everything I got,” she said. “I wanted us to be able to reach new heights.”

The 5-foot-8 Cole ranks fifth in NCAA Division I with 146 assists. She ranks eighth in assists per game (6.3). She dished out nine assists in three of the past five games.

“Her ability to run the team and get us easy opportunities is what makes her so valuable,” Brooks said.

What is the secret to getting so many assists?

She ranks fifth on the team in scoring with an average of 9.5 points. She has scored in double figures in nine games this season, including six ACC contests. She tallied 19 points in last week’s loss to nationally ranked North Carolina State.

“I can score. I’m not saying that in a cocky way. But I can score when I want to score,” she said. “[The N.C. State game] was one of those nights where I needed to step up and be bigger than my normal role.

“Throughout the season, every time that we needed that, I think I’ve done it.”

Cole gets a lot of her points by driving to the basket.

“Tough to keep her in front of you,” State coach Wes Moore said.

Brooks said the speedy Cole is a “dynamic athlete.”

“I’m not saying she’s LeBron James, but I think LeBron James gets a little upset when people can’t match his intensity or his athleticism. And I said [to her], ‘No one’s going to be able to run as fast as you do. They’ve just go to run and get to their positions, and then you’ve got to sometimes slow down,’ ” Brooks said.

As the season has unfolded, Cole has become more comfortable being the leader of her new team.

“Now I’m doing a lot more of the talking and using my voice, rather than just leading by example,” she said. “Every night I just try to play hard and give my team whatever we need, whether that’s points, where that’s hounding [foes] on defense, whether that’s being a vocal leader.”

At Tennessee: averaged 2.9 points as a freshman.

At Georgia: averaged 7.8 points and 4.1 assists as a third-year sophomore; averaged 11.1 points and ranked fifth nationally with 7.0 assists per game as a fourth-year junior last season.

This season: ranks fifth nationally with 146 assists; ranks eighth in assists per game (6.3); averaging 9.5 points and 5.0 rebounds; has 26 steals.

Notes: Virginia Tech was projected to make the NCAA tournament as a No. 7 seed in ESPN's latest "bracketology" on Tuesday. … Former ESPN analyst Nell Fortner is in her first season as Georgia Tech's coach. She was the coach of the U.S. Olympic team that won gold in 2000. She has been the coach at Purdue and Auburn, as well as for the WNBA's Indiana Fever. … Georgia Tech won at nationally ranked Florida State last month. Georgia Tech also won at Syracuse last month. … Georgia Tech has followed up a five-game losing streak with back-to-back wins. … Francesca Pan averages 12.0 points for the Yellow Jackets, who are tied for sixth place in the ACC. … Aisha Sheppard averages 15.8 points for the Hokies.