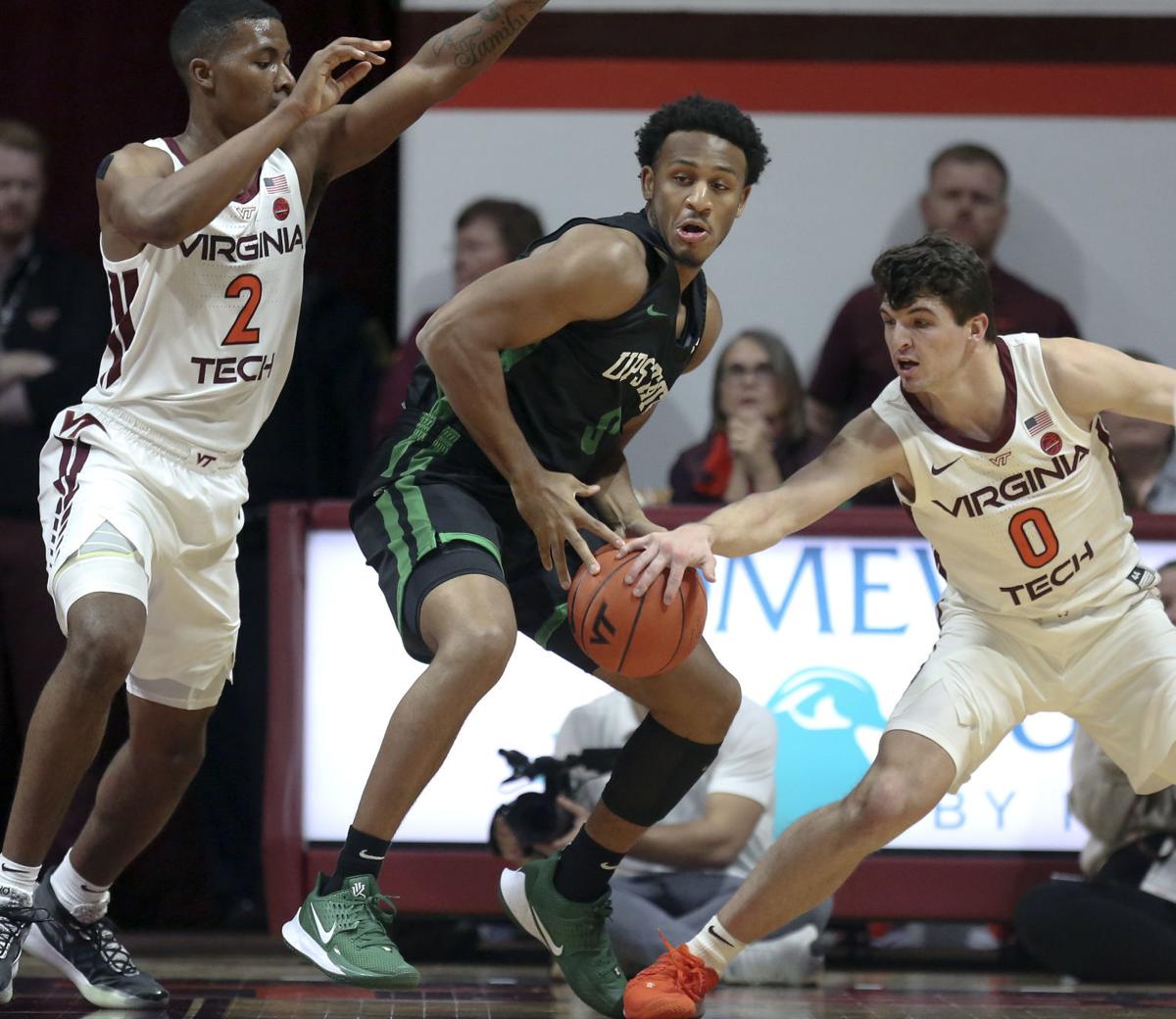 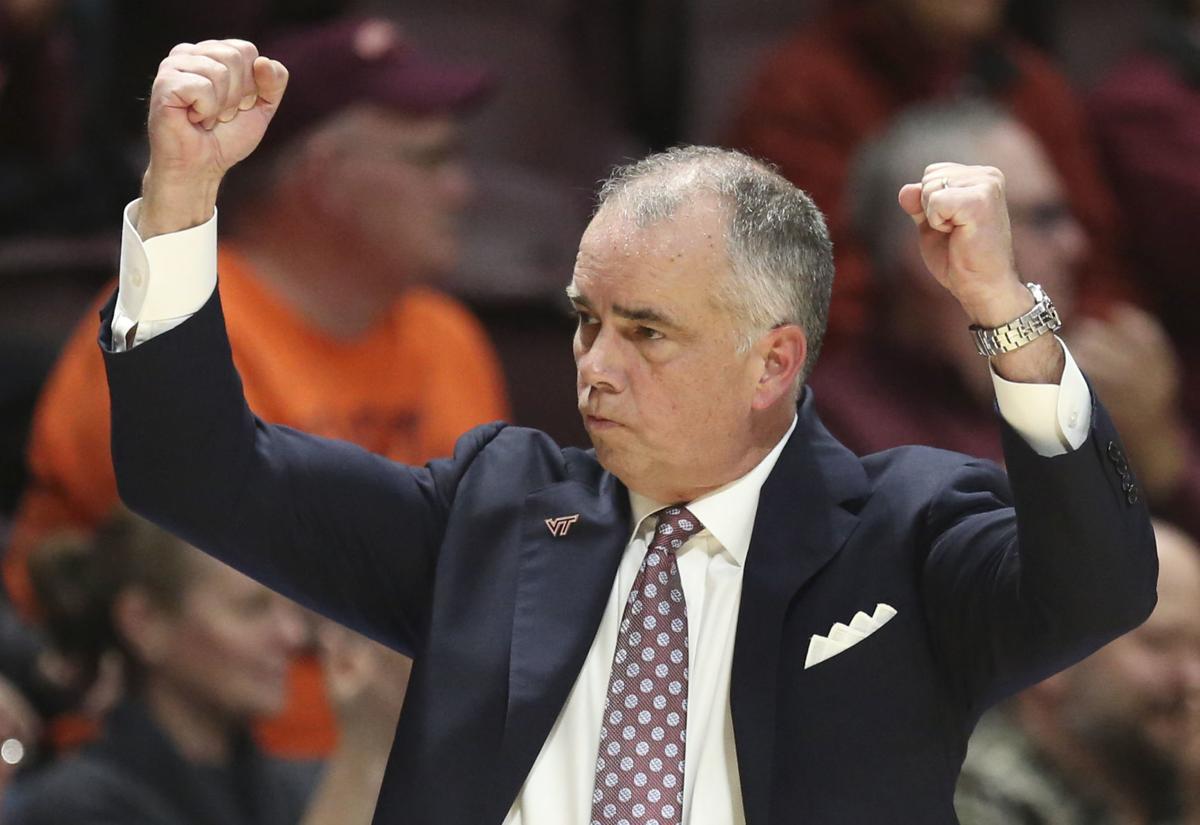 Virginia Tech head coach Mike Young pumps his fist after a defensive stop and score in the first half. 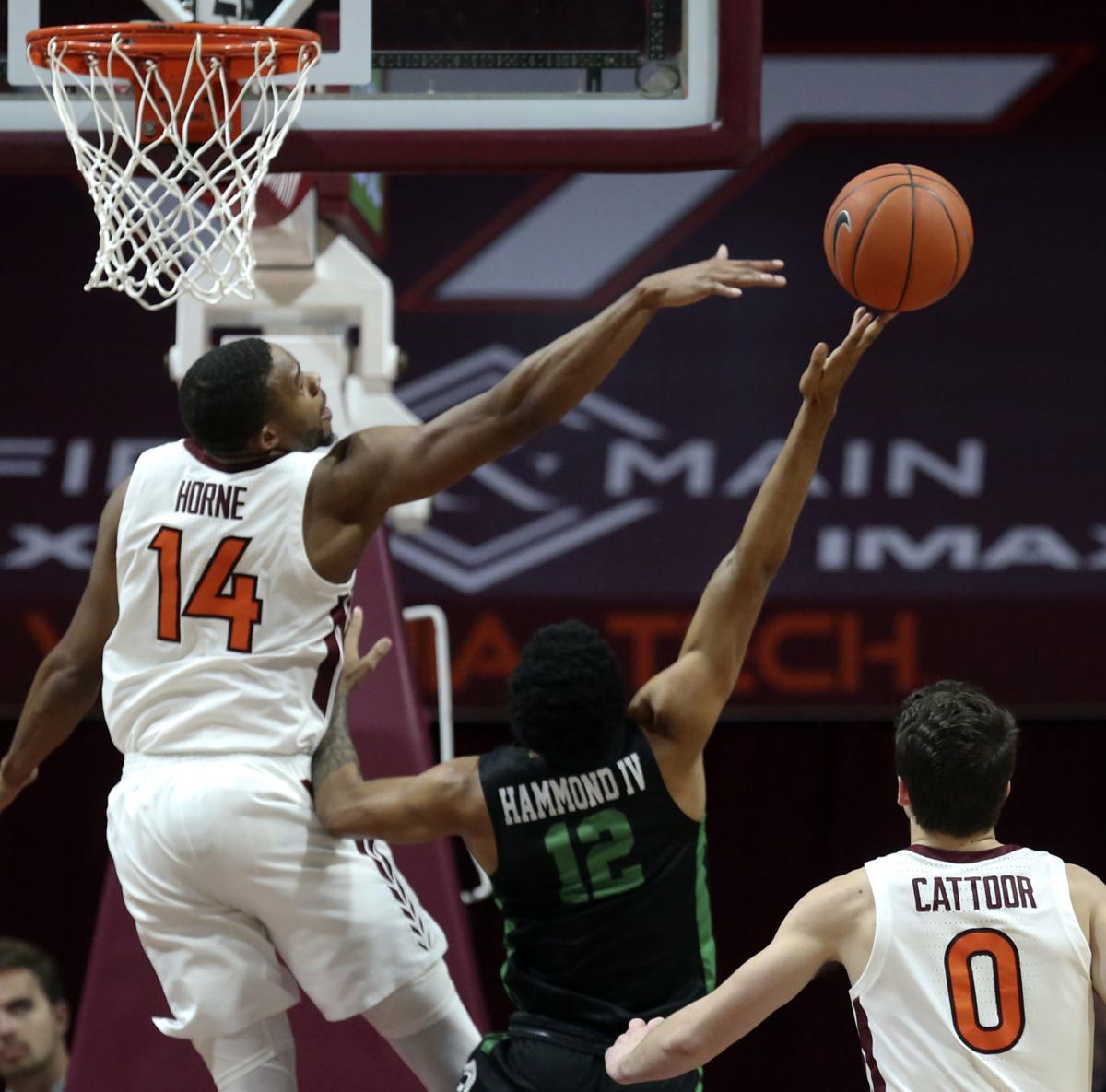 P..J. Horne (14) of Virginia Tech attempts to block a shot by Everette Hammond (12) of USC Upstate as Tech’s Hunter Cattoor looks on. 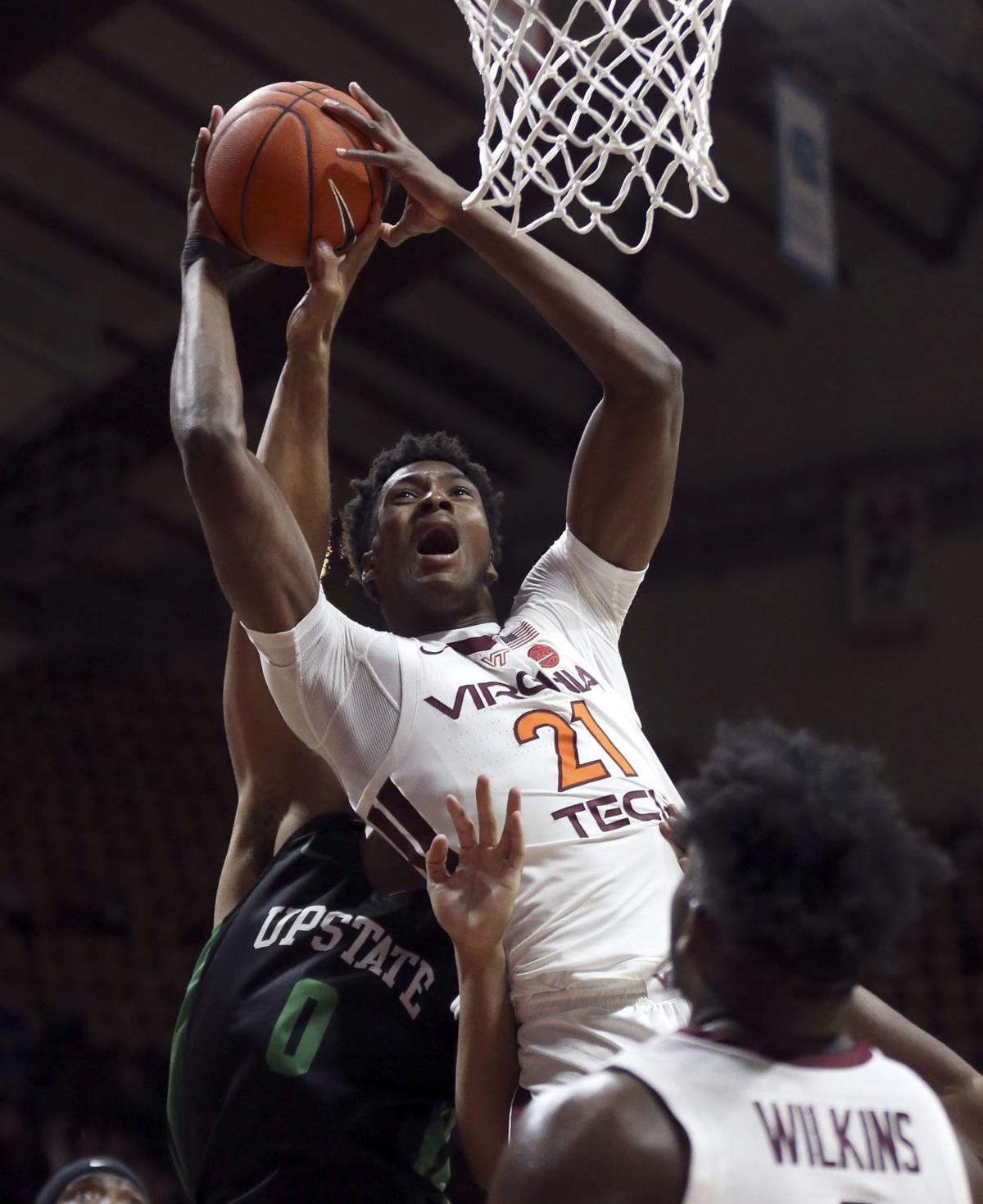 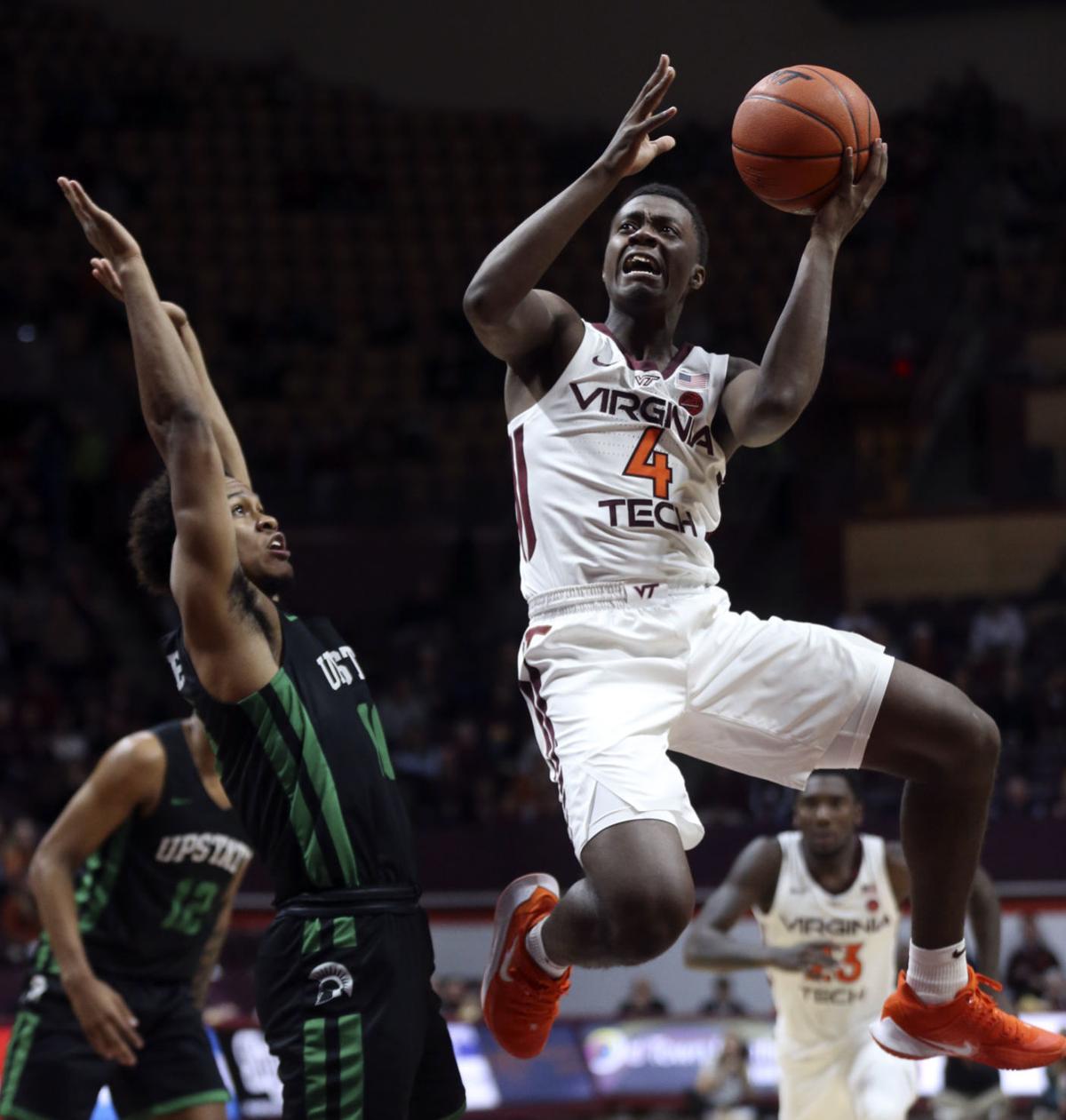 Virginia Tech head coach Mike Young pumps his fist after a defensive stop and score in the first half.

P..J. Horne (14) of Virginia Tech attempts to block a shot by Everette Hammond (12) of USC Upstate as Tech’s Hunter Cattoor looks on.

Nolley has scored in double figures in each of his first three games for Tech (3-0), including a 30-point debut in last week’s win at Clemson.

“I shoot open shots,” Nolley said. “I shoot the shots I know I can make, and I get the points.

Nolley had 11 points and seven rebounds in his “bad game,” a win over Coppin State last Friday.

He was 8 of 14 from the field Wednesday.

“Your better players are going to get the majority of the shots. This isn’t a democracy,” Tech coach Mike Young said. “This isn’t ‘We’re all created equal.’ Those good ones, they love playing for me.

“As great a home run hitter as Mickey Mantle was, he struck out some. I’m not comparing Landers the basketball player to the Mick. But he’s got a little more of a green light than some others.”

“As a shooter, you’ve got to shoot, no matter if you’re hitting or not,” Nolley said. “That’s why you’re here. That’s why you get time to play.”

“My attitude wasn’t there,” Nolley said of the Coppin State game. “I was mad at myself because I wasn’t hitting shots.”

He bounced back with a better shooting performance against Big South member USC Upstate (1-3).

“Today I just had a different mindset going in — not worried about scoring,” Nolley said. “I just let the game kind of come to me.”

“His attention to detail and awareness in shootaround today was at an all-time high,” Young said. “He was geared up, ready to play.”

“He has a swagger,” Dickerson said. “He’s going to be a really good ACC player.”

“They know who they are. They’re a 3-point shooting team,” Dickerson said.

Tech freshman point guard Jalen Cone had 11 points off the bench, more than he scored in his first two games combined. He was 3 of 3 from 3-point range Wednesday.

“He was quicker, faster and more at ease on the floor tonight,” Young said.

Tech freshman off-guard Hunter Cattoor had nine points off the bench, more than he scored in his first two games combined. He was 3 of 6 from 3-point territory Wednesday.

“The two games before, I think it just got in my head to just worry too much about making the shot or making this play,” he said. “Today I just went out there and played basketball.”

Cattoor, who is from Florida, signed with Wofford last fall but flipped to Tech in April after Young left Wofford to steer the Hokies.

“I feel like I’m improving every single day,” he said. “I wouldn’t say I’m there yet.”

“We did really a nice job of guarding them,” Young said. “They had a number of late shot-clock shots.”

The Hokies shot 53.4 percent from the field to the Spartans’ 37.7 percent.

“Their size and physicality wore us down,” said Dickerson, whose team has yet to beat a Division I foe.

P.J. Horne and Nahiem Alleyne had nine points apiece for Tech, while Wabissa Bede had seven points and eight assists.

Tech led 38-24 at halftime despite giving up eight offensive rebounds to Upstate in the first half.

“We may have mentioned that at halftime,” Young said of Upstate’s offensive rebounds. “We may have said some things that my mom would not be really proud of.”