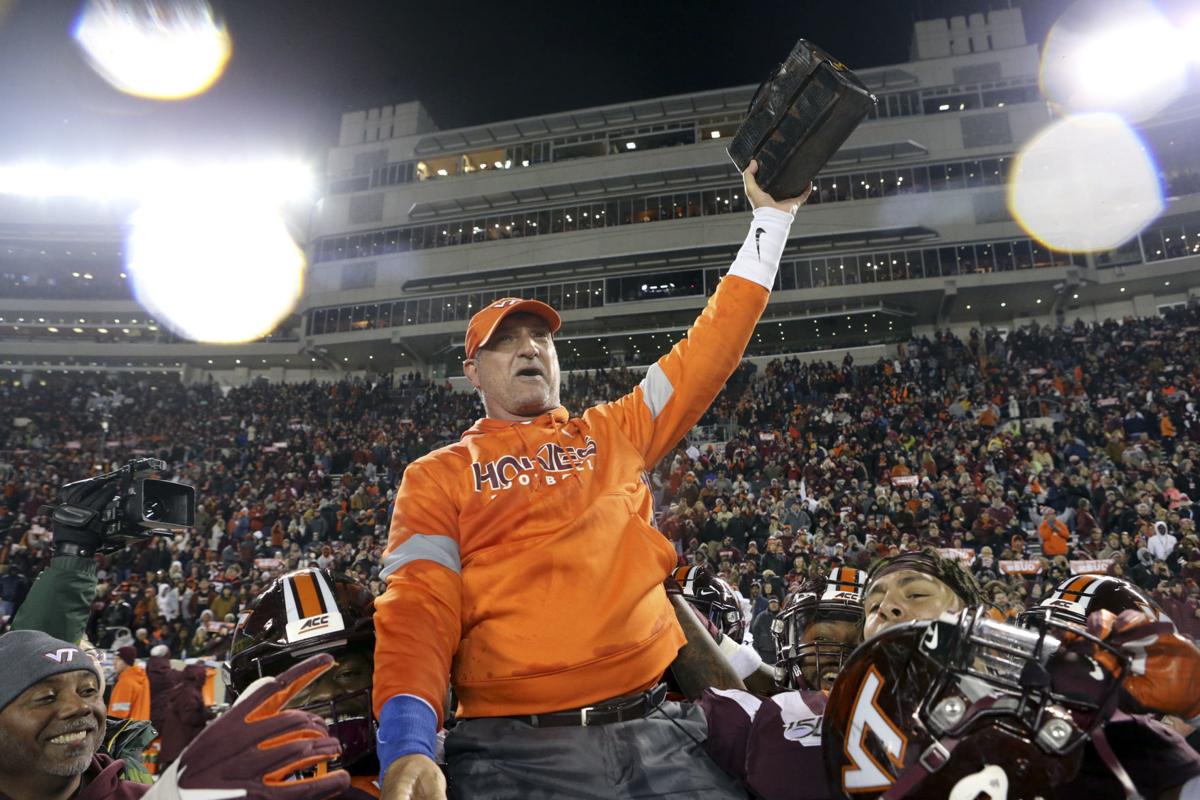 Virginia Tech defensive coordinator Bud Foster holds up the Tech lunch pail as he is lifted onto the Hokies’ shoulders after Saturday's win over Wake Forest. 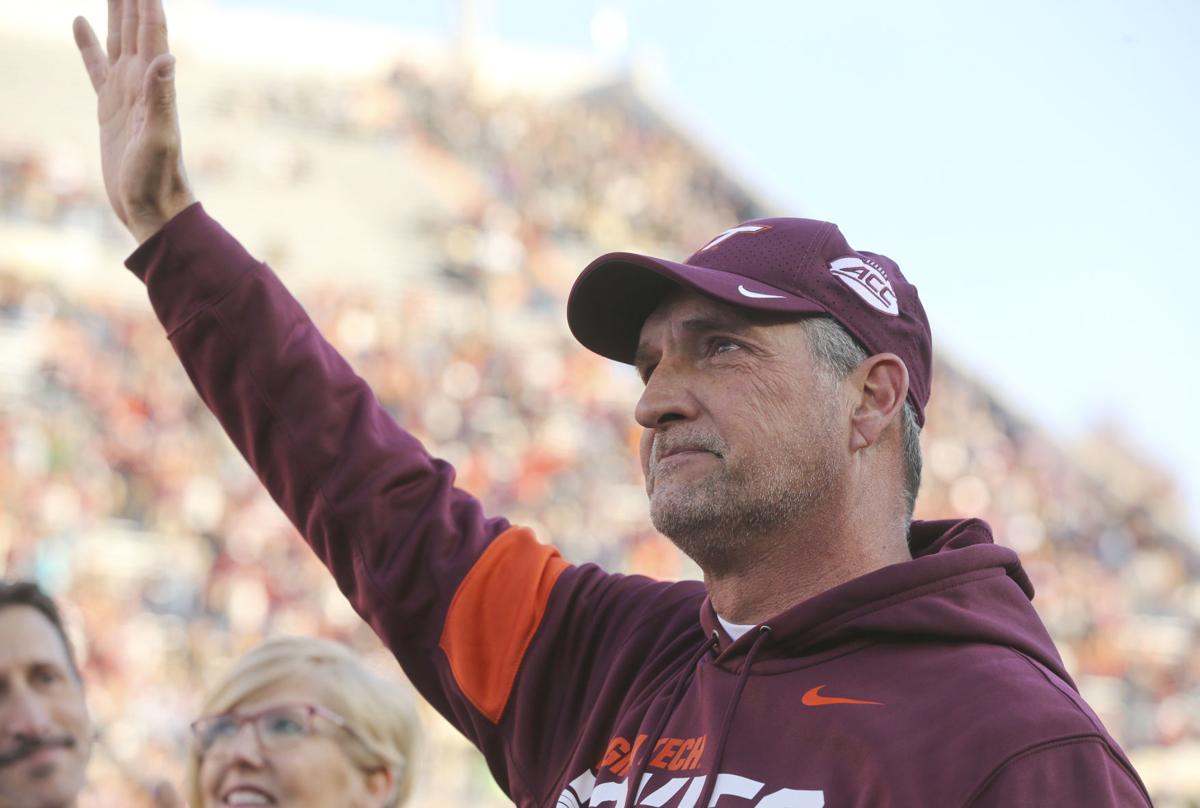 Virginia Tech defensive coordinator Bud Foster waves to the crowd Saturday during a ceremony in his honor before the Wake Forest game. 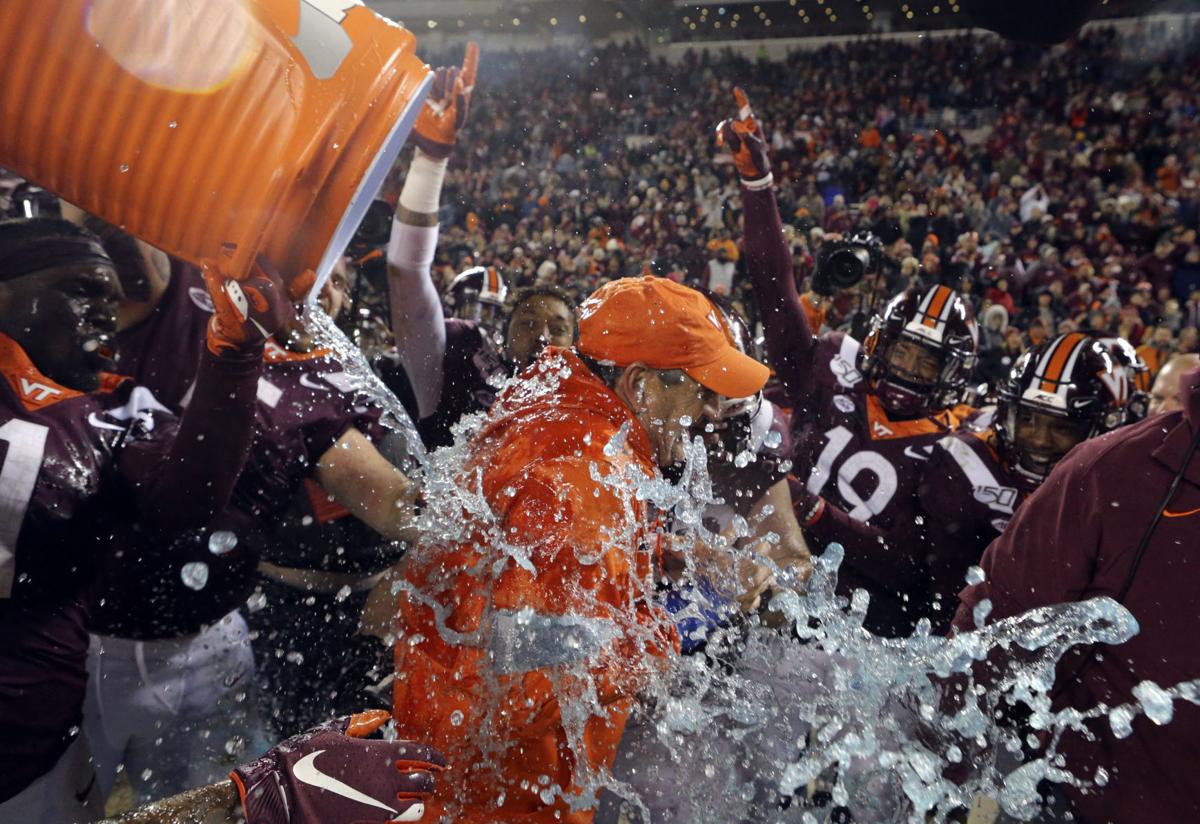 Virginia Tech defensive coordinator Bud Foster is doused with a bucket of Gatorade after Saturday's win over Wake Forest. 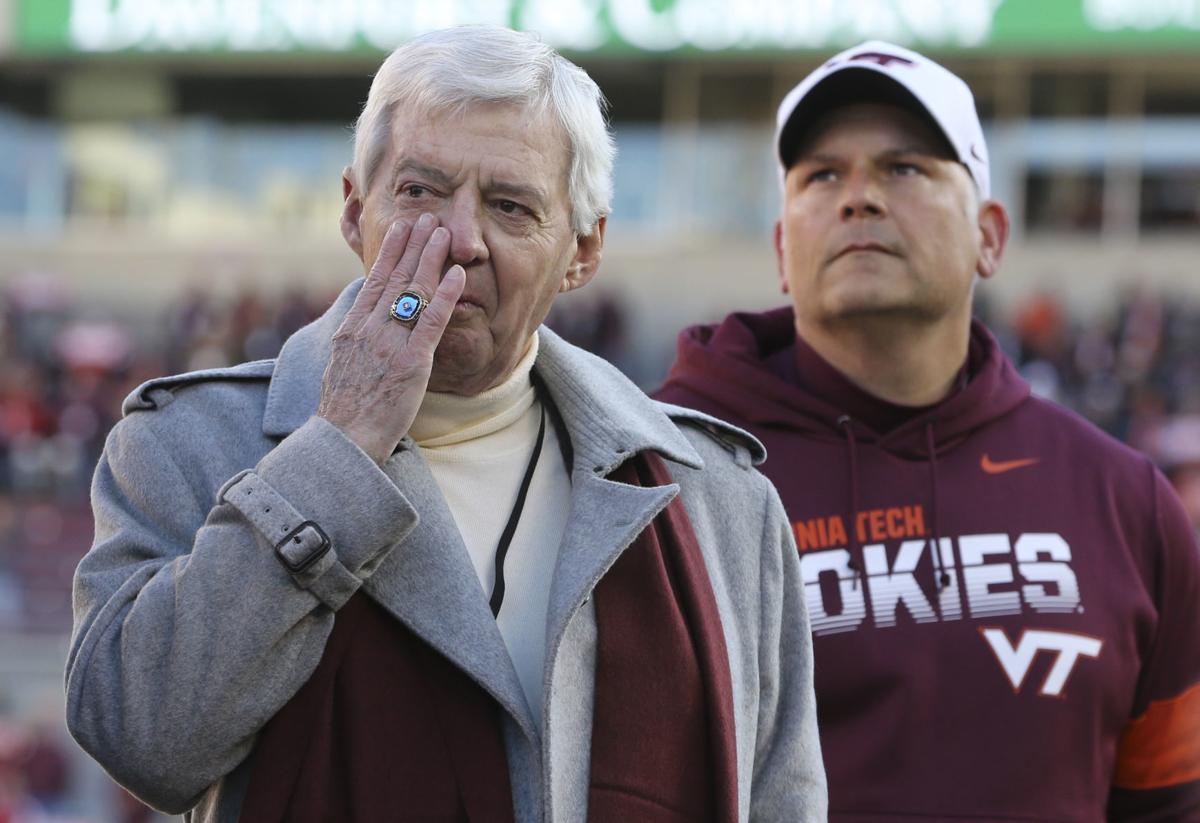 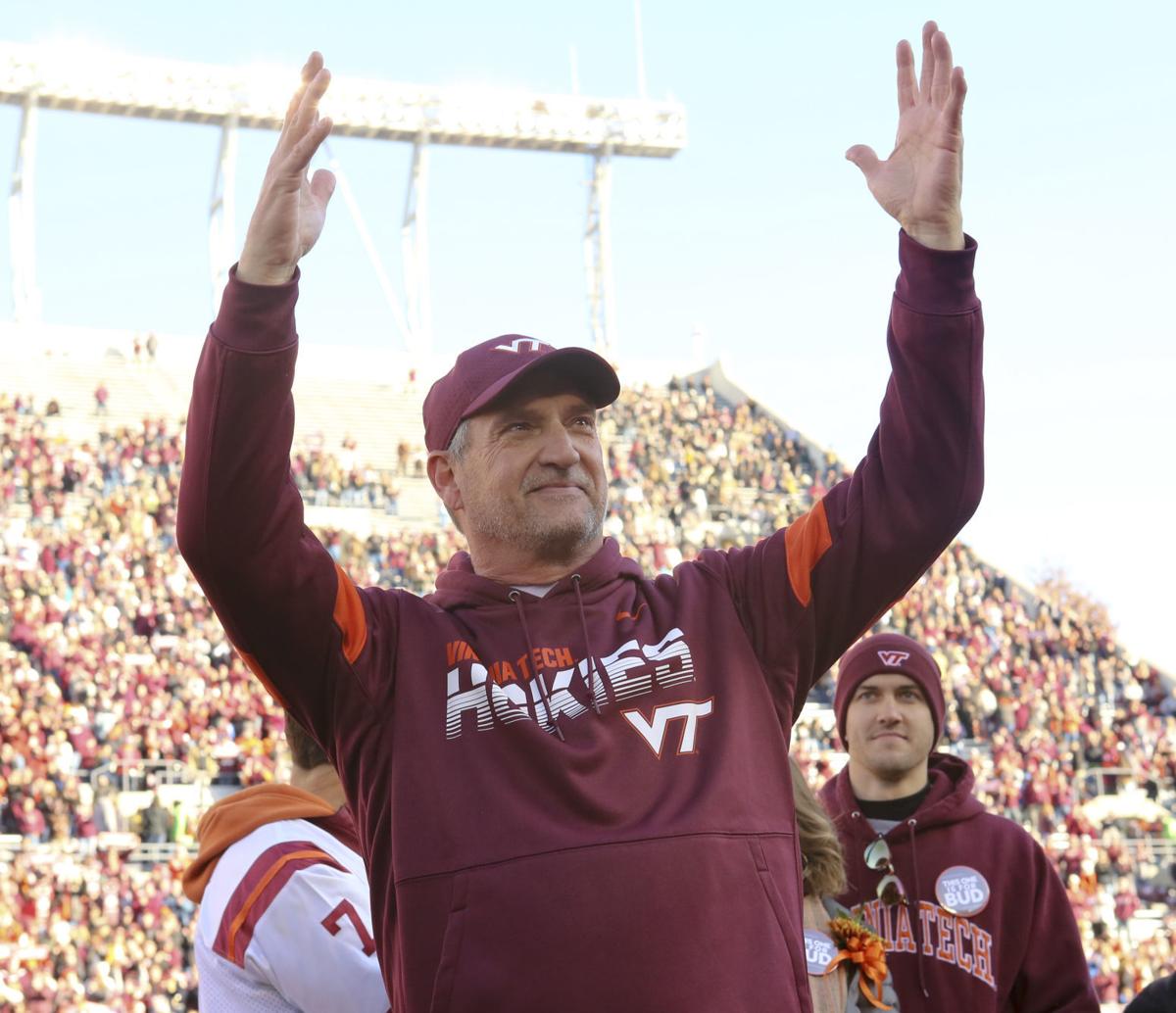 Virginia Tech defensive coordinator Bud Foster was honored in a pregame ceremony before the Hokies played Wake Forest on Saturday.

Virginia Tech defensive coordinator Bud Foster holds up the Tech lunch pail as he is lifted onto the Hokies’ shoulders after Saturday's win over Wake Forest.

Virginia Tech defensive coordinator Bud Foster waves to the crowd Saturday during a ceremony in his honor before the Wake Forest game.

Virginia Tech defensive coordinator Bud Foster is doused with a bucket of Gatorade after Saturday's win over Wake Forest.

Virginia Tech defensive coordinator Bud Foster was honored in a pregame ceremony before the Hokies played Wake Forest on Saturday.

BLACKSBURG — Bud Foster will not be a Virginia Tech football coach for much longer, but he will always be a part of Lane Stadium.

Foster, who is retiring as Tech’s defensive coordinator at season’s end, was honored on “Bud Foster Day” before the Hokies beat Wake Forest on Saturday.

The architect of Tech’s “Lunch Pail Defense” was joined on the field for the pregame ceremony by his family; ex-Tech coach Frank Beamer; coach Justin Fuente; and athletic director Whit Babcock.

To Foster’s surprise, a banner bearing Foster’s last name and a drawing of a lunch pail was unveiled at the top of the north end-zone stands, where Tech honors the players whose numbers or jerseys have been retired.

“Not going to school here, not playing here, but being a part of this place, to have that put up there is just a tremendous honor, something that I never even thought about,” Foster said after the 36-17 win.

“Is that going to stay there, Whit? Is that up there just for one game?” he cracked.

Foster brushed away tears after the banner was revealed.

“I put a lot of heart and soul into this thing,” Foster said after the game. “It’s kind of bittersweet. I’ve had a great run. We’ve done some really special things. And to know that it’s slowly coming to an end. To have my family with me, … they sacrificed so much. … I had so many players back. To have Coach Beamer by my side, who I just owe so much to. It was a dream come true.

“I’m proud, but also it was an emotional time.”

Even before the banner was unveiled, Foster’s eyes watered as fans chanted “Bud! Bud!”

“He’s an emotional guy,” Beamer said later, recalling their time together. “On the sidelines, once in a while I’d have to say, ‘You’ve got to calm down a little bit, Bud. We’re getting ready to have to make a really important call here, so calm down and get your thoughts going.’ ”

Beamer said Foster getting the banner was “very appropriate.”

“He’s meant so much to this program for so many years,” Beamer said. “Somebody asked me the other day, ‘You think they’d put an assistant coach into the College Football Hall of Fame?’ and I said, ‘Well, I think Bud Foster would be a great first one to go.’

“What he’s done for so many years and what he’s meant to Virginia Tech, college football, not many people have been doing it that well for that long.”

Foster hugged Beamer and Fuente, and Beamer brushed away a tear as he observed Foster during the ceremony.

“I knew how appreciative he was,” Beamer said. “We’ve been together a long time.”

Although Foster did not speak to the crowd during the ceremony, a prerecorded message from him played on the video board after he ran off the field.

“It’s hard to believe it’s been 33 years. It’s been an amazing 33 years,” Foster said during the three-minute message. “I’ll always be a Hokie forever.”

Fans are plenty thankful for Foster.

“He’s a legend,” Joyce Noell of Roanoke County said before the game. “The way he treats people — humble and giving. And he’s just a genius in what he does.”

“Bud’s been a rock. We hate to see him go,” Frances Hunter of Radford said.

Hokies-turned-Washington Redskins Tim Settle and Greg Stroman came back for the game.

“He taught us to never feel comfortable,” Settle, a defensive tackle, said on the sideline before the game. “Told us to keep the pressure on them no matter what the situation, don’t ever lay down. Always play with grit, and do it in a dominant way.

“It’s just the passion you could tell he has for the game that gets his players going.”

Stroman, a cornerback, said Foster is “like a dad” to him.

“You’re playing for your dad; you lay it on the line for that guy,” Stroman said. “When it’s time to play football, he’s on you — very intense.”

Foster announced in early August that this would be his final season.

Has he gotten nostalgic this season?

“Sometimes it hits him, sometimes it doesn’t. I think today it really has,” Foster’s son, Grant Foster, said on the sideline before the pregame ceremony. “I don’t think he’ll ever understand what he’s really done for this community and this school. But being here for 33 years and seeing it come from what it was to what it is now, I think he can look back on it and see he has done a lot for this place and the school and the players.”

How will Foster, who has a home on Claytor Lake, handle retirement?

“Sometimes I think that he’ll drive himself crazy because he’s such a busybody,” his son said. “But that lake is nice when the water’s right and the temperature’s right. Once summertime gets around, I believe he’ll have plenty to do.”

After the win over nationally ranked Wake Forest, Virginia Tech players doused Bud Foster with a bucket of Gatorade.

They lifted Foster onto their shoulders as Foster held up the lunch pail.

“That was pretty cool,” Foster said.

Foster later emerged from the team’s meeting room at the stadium with the lunch pail in one hand and the game ball in the other.

“You couldn’t write a script any better,” Fuente said.

BLACKSBURG — This week’s quarterback decision was an easy one for Virginia Tech coach Justin Fuente.