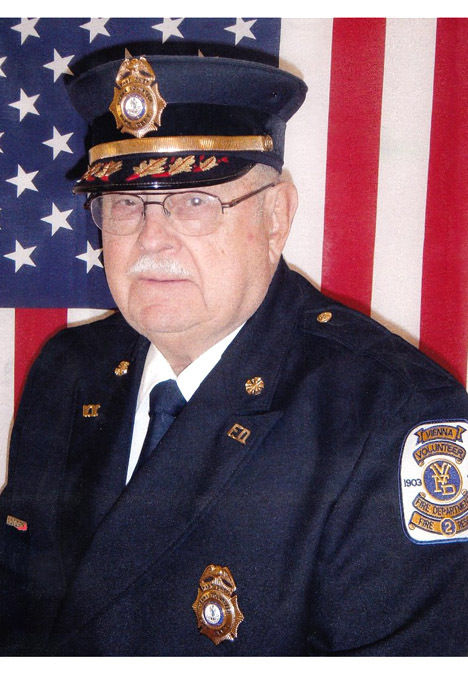 Charles Calvin Singleton, 91, of Madison Heights, passed away Thursday, January 9, 2020 at his residence. Born on May 4, 1928, he was the son of the late Charles William Singleton and Ruth Burford Singleton. He was the loving husband of Viola G. Singleton for 53 years. In addition to his wife, he is survived by two daughters, Carolyn and Joyce; a stepson, Ron (Marcia); three grandchildren, Amy, Mark (Diane), and Keith (Kellie); and six great-grandchildren. Charles served in the U.S. Army in Austria during World War II and in Korea during the Korean War. He retired from C & P Telephone Co. in 1981 after 32 years of service. One of Charles' greatest loves began in 1952 when he got involved in fire services. He joined the Vienna Vol. Fire Dept and served in many capacities and received multiple accolades for his service until 1981 when he and Vi moved to Ebony Va. He is a current Life Member with VVFD. He joined the Ebony Vol. Fire Dept. and also served in various capacities, one being chief for 14 years. Still an active member at EVFD he was chosen as their 2019 Firefighter of the Year. In July 2005, he was appointed by the Amherst County Board of Supervisors as Chairman of the County Emergency Services Council. In July 2012, he received the President's Award from the Va. State Fire Chiefs Association. Since 1983, he has served on the Va. State Firefighters Association Legislative Committee. In 2014, he was awarded the Lifetime Achievement Award by the National Fire Services Council. Family will receive friends from 6 until 8 p.m., Monday, January 13, 2020, at Whitten Monelison Chapel. A funeral service will be conducted Tuesday, January 14, 2020, at 11 a.m. at First Baptist Church of Monroe with Pastor Glynn Coleman officiating. Burial will follow in Fort Hill Memorial Park. The family requests that those considering memorial contributions make them to First Baptist Church of Monroe, PO Box 247, Monroe VA 24574; Ebony Vol Fire Dept, Ebony VA 23845; or their local fire dept.

To send flowers to the family of Charles Singleton, please visit Tribute Store.
+1
+1