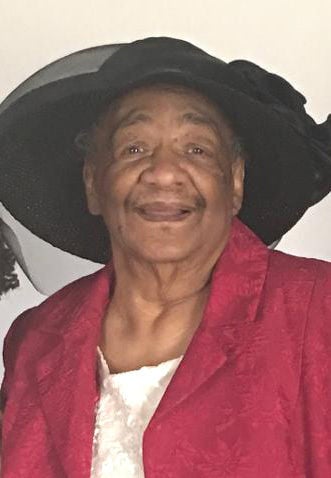 Hallie Mae Jones was born on February 7, 1935, in Bedford, Virginia, to Mary "Dollbaby" Jackson and William E. Jackson Sr. It was here Hallie Mae found the love of her life, and personal chauffeur, James Thurman Jones. Together they shared an unconditional love that endured 63+ years, raising a beautiful family, until his passing in 2018. Hallie Mae gained her wings on Wednesday, March 18, 2020, and the two were reunited again. Hallie Mae had an immense passion for cooking, rarely following a recipe, always adding a pinch of this, and a dab of that. She later gained employment with McCormick Foods, serving for over 25 years, devoting herself fully to her work until she retired in 1998. Hallie enjoyed spending time with her family and friends, regularly hosting game nights. She was the Queen of Cards, possessing an extremely competitive spirit that made it hard for her opponents to win a game. Hallie Mae had a heart of gold, always offering her honest opinion. She was strong and bold, just like her coffee. She was an avid reader, always immersing herself in a good book. When not reading, you could find Hallie feverishly scribing--from writing grocery lists to sending birthday cards and letters to her children and grandchildren. In addition to her devotion to family, Hallie Mae had a strong faith. She was a founding member of New Life Baptist Church, where she served faithfully until her health began to decline. Hallie was active in the community and even served in the Civil Rights Movement. Through the years, she looked forward to James Thurman returning each day from the Hilltop to give her the weekly updates--always staying abreast of the happenings in her small town. Hallie Mae's phone line was always busy, as she enjoyed being a listening ear for all, offering her advice whether you wanted to hear it or not. She was a woman full of integrity. Hallie Mae was preceded in death by her loving husband, James Thurman Jones; their two daughters, Gaynelle Jones and Victoria Elaine Bender; her mother, Mary 'Dollbaby' Jackson; her father, William E. Jackson Sr.; and her siblings, William 'Lamppost' Jackson; Ethel Crenshaw, Lawrence 'Baldy' Jackson; Charlotte 'Diane' Taylor; and, Donald 'Lavelle' Jackson. She is survived by her children, Steven L. Jones (Tracy), Ninnia J. Mitchell (Keith), Jeffery T. Jones (Kholoud), Mona J. Starks, Richard F. Jones (Lorita Renee), Sheila J. Benning, Rodney E. Jones (Denitra), and Chaunce M. Jones (Tonya). She was also blessed by the jewels of her crown, her 20 grandchildren and 26 great-grandchildren. Her heart held four additional people that she loved like her own children, Walter "Lewis" Starks, Renee Bryant-Jones, Calvin Jackson, Brian Brawley, and Devaughn 'Dee' Douglas. Whether you referred to her as Hallie Mae, Mom, or Grandma, you knew her as an amazing woman full of love, sarcasm, and wisdom. As we continue to live out Hallie Mae's legacy, we will always remember one of her favorite scriptures, Psalm 37:25, "I have been young and now am old; yet, have I not seen the righteous forsaken, nor his seed begging bread." ~The Jones Family #JonesStrong Services for Mrs. Hallie M. Jones will be private. Arrangements by Bedford Funeral Home.

To plant a tree in memory of Hallie Jones as a living tribute, please visit Tribute Store.
+1
Plant a tree
+1