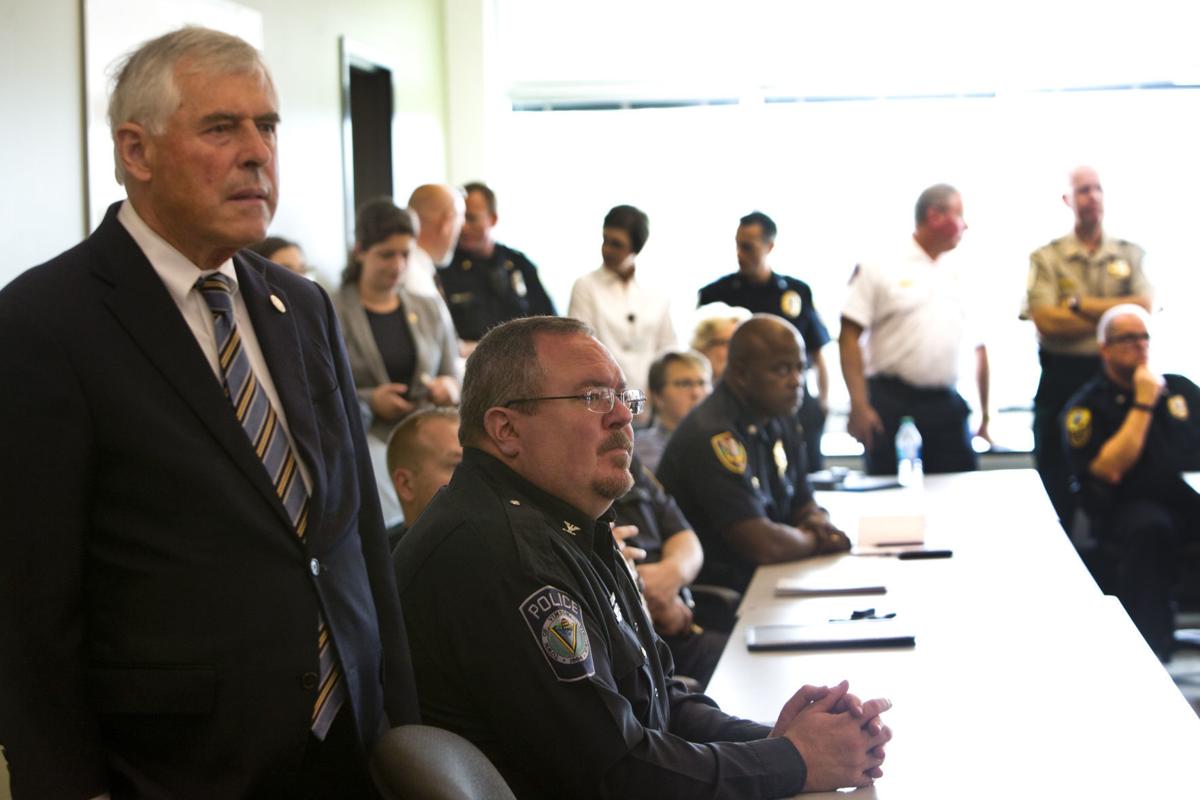 Sen. John Edwards, D-Roanoke, (left) will become chair of the Senate Courts of Justice Committee when the Democrats take control of the legislature next week, and he said he's eager to tackle criminal justice reform. 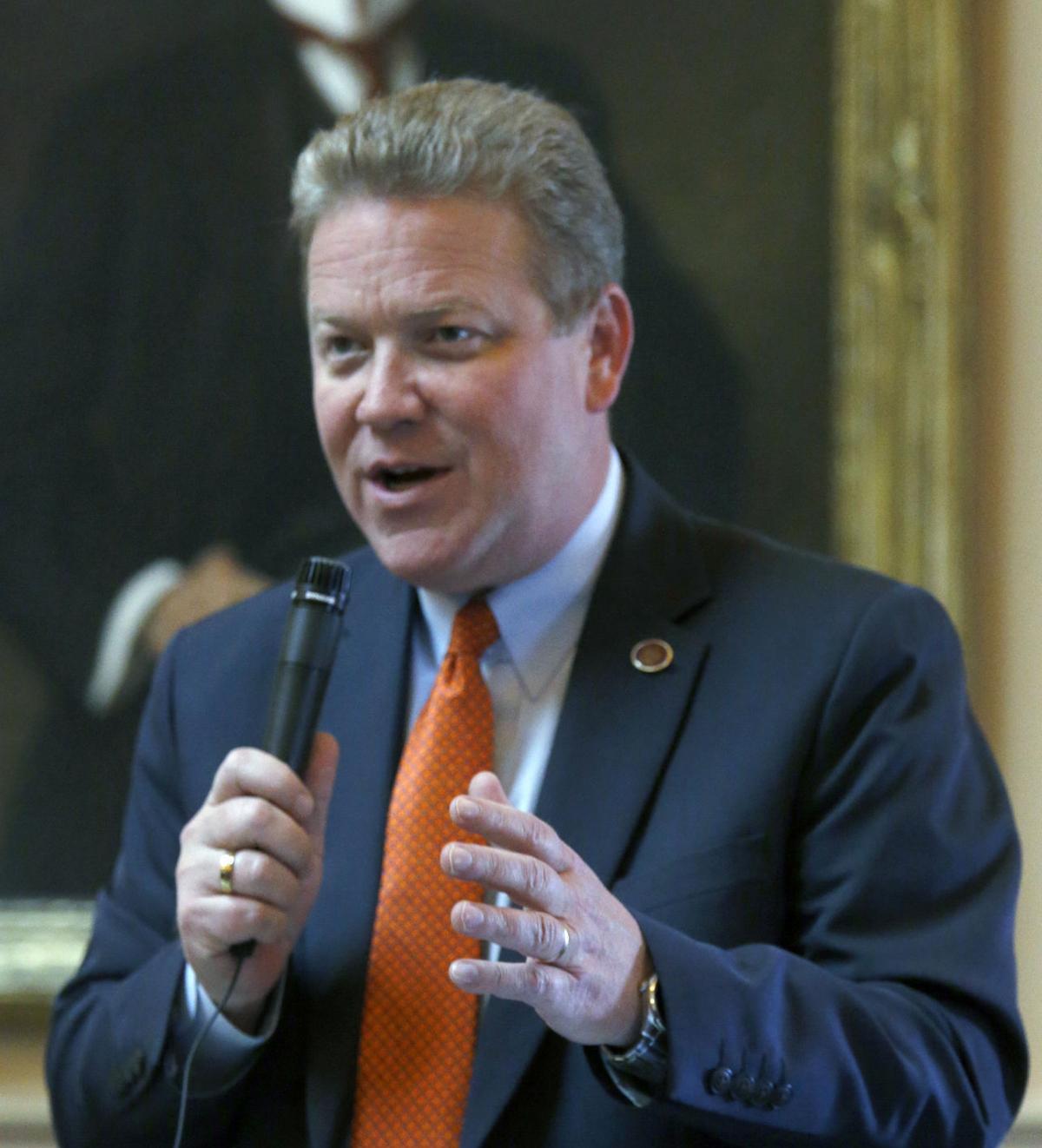 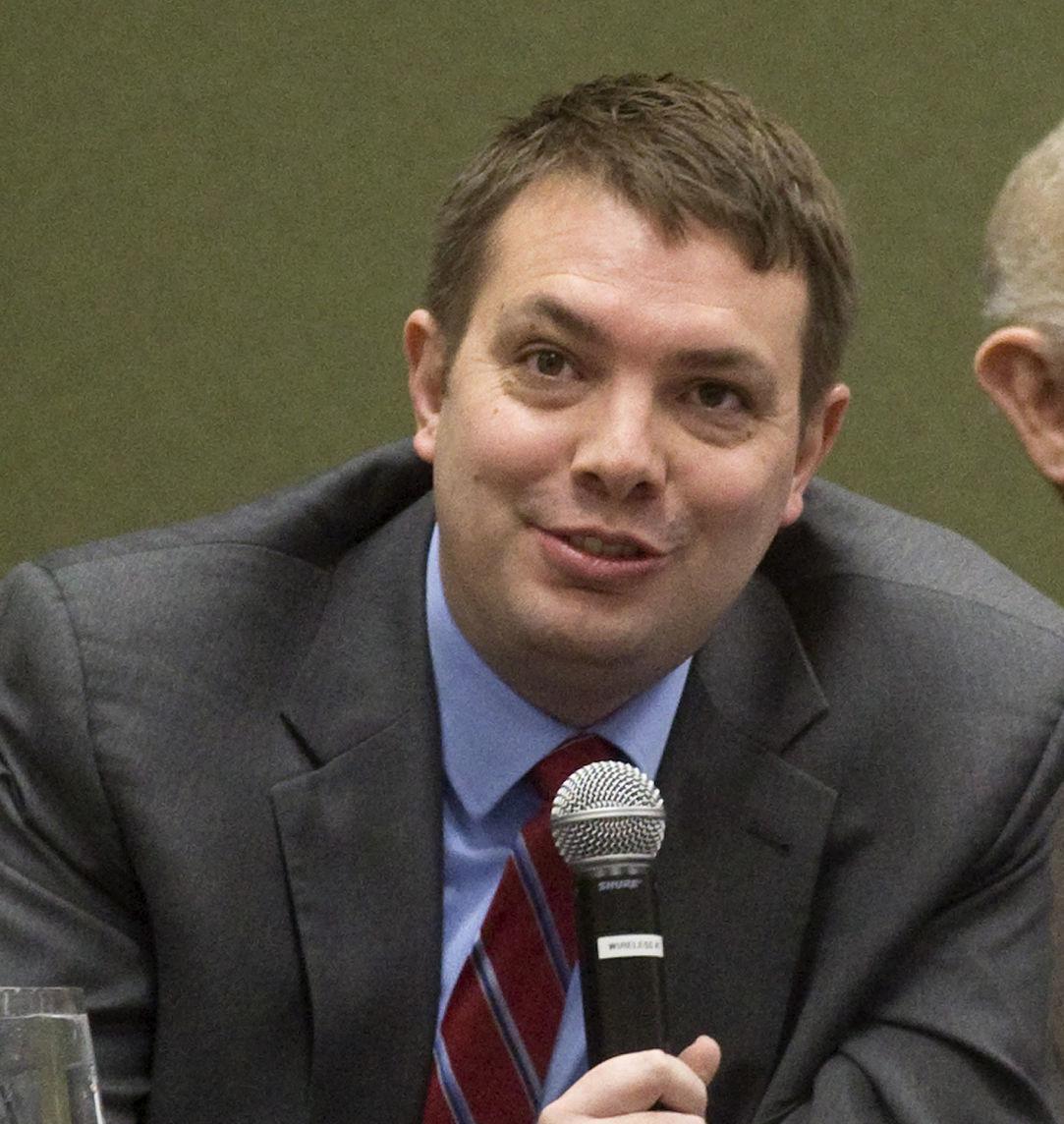 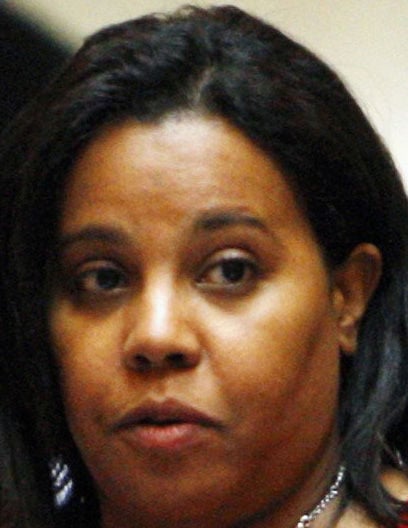 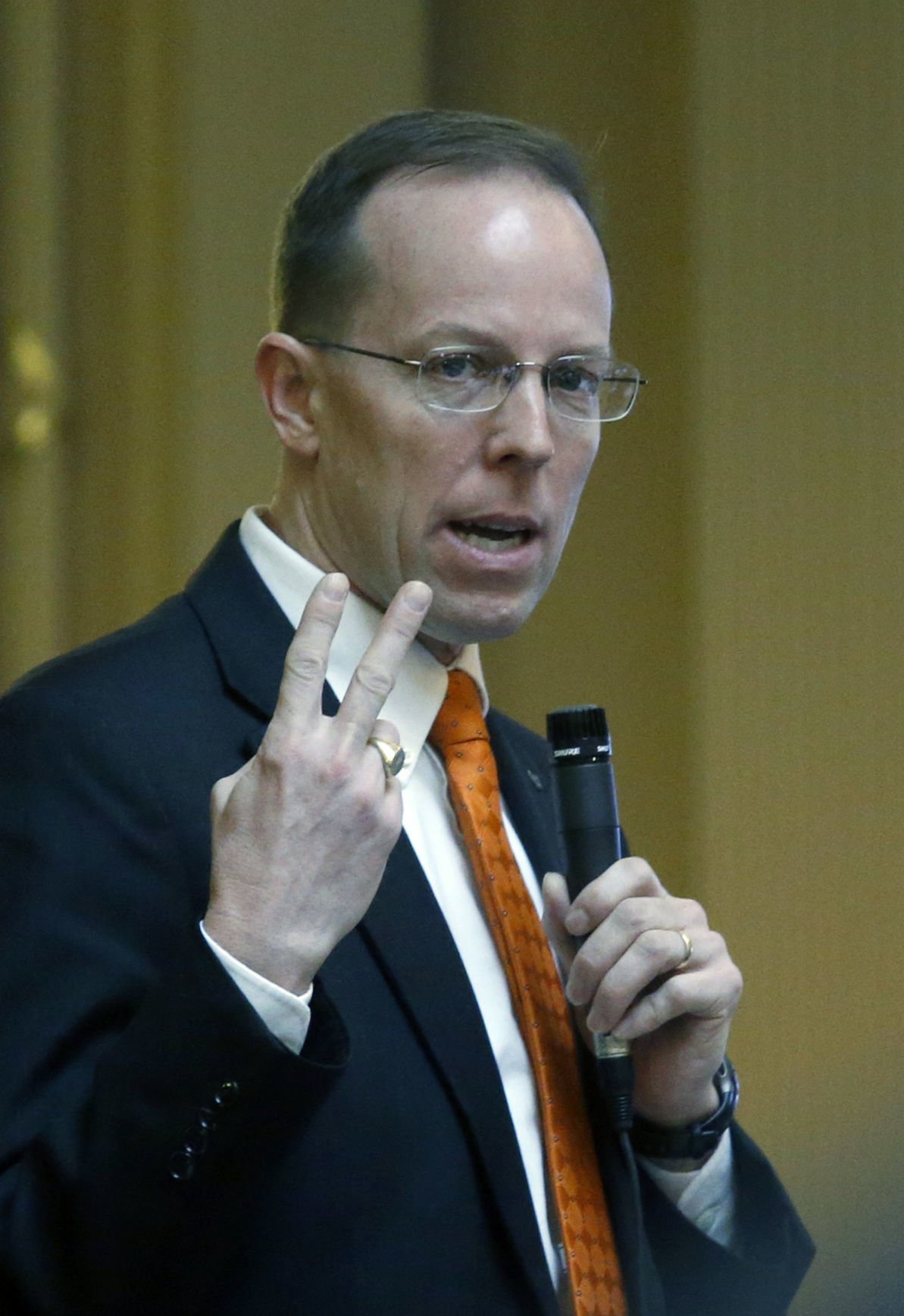 ROANOKE — Reinstating parole, marijuana decriminalization and reducing youth incarceration are just a few of the criminal justice issues Democrats are eager to tackle when they take control of the Virginia General Assembly next week.

The Democrats’ promise to bring criminal justice reform to Virginia has Republicans both excited and nervous.

“Mandatory minimums and lock them up and three strikes, those days are gone because it’s been shown those measures aren’t effective,” said Sen. Bill Stanley, R-Franklin, who has been an advocate for years for policies that create a fairer and more equitable justice system. “What we need in criminal justice reform is to temper justice with mercy. But I do worry about swinging too far with criminal justice reform.”

The national conversation about dealing with crime has evolved in recent years toward evidence-based and common sense approaches to public safety and questioning the effectiveness and humaneness of tough-on-crime policies.

Criminal justice reform is one area that is bipartisan. On the left, liberals often talk about racial and gender disparities between who is arrested and sent to prison. On the right, fiscal conservatives will point to a poor use of taxpayer dollars investigating and prosecuting certain crimes or a simple marijuana possession charge preventing someone from getting a job, so they receive government assistance.

“It’s important to be smart on crime so that our law enforcement can target the most important things and we can best spend our taxpayer money,” said Sen. David Suetterlein, R- Roanoke County.

This was his motivation behind getting the felony threshold for larceny and other property crimes increased from $200 to $500 in 2018.

This also is his logic behind a bill he’s introducing again that would raise from 80 to 85 mph the threshold for reckless driving in areas of Virginia where a 70 mph limit is posted. If a police officer clocks a driver goingmore than 80 mph in Virginia, that person faces a misdemeanor charge that can carry up to a year in jail or a $2,500 fine. Suetterlein said a person will likely hire a lawyer and the charge will be reduced.

“We should be passing laws we expect to be enforced, and having laws like an artificially low felony threshold for larceny or overly strict speed limits that can be argued down by attorneys doesn’t serve the taxpayer or the general public,” Suetterlein said.

Democrats and Republicans part company on certain issues including controlling the proliferation of guns and gun violence, but they say there are plenty of others many on both sides of the aisle would vote for.

Stanley, a lawyer, is sponsoring for the third time a bill to repeal a law that suspends the driver’s licenses of those who don’t promptly pay their court debts, which evidence shows disproportionately hurts poor and minority drivers.

Republicans in the legislature have been pushing for years various bills that would allow for people to seek expungement of certain convictions, such as underage alcohol possession and marijuana charges. They’ve filed expungement legislation again for this upcoming session.

“We want to create a balance so when someone enters the criminal system, they aren’t exiled, and when they return to society, they are welcomed back as productive members and not continued to be penalized for their mistakes,” Stanley said. “When someone is caught with a minor pot conviction, that person will interview for a job, undergo a background check and then be cast aside. Mistakes of youth shouldn’t be paid for in maturity of adulthood.”

Lawmakers have pointed to a handful of tough-on-crime Republicans in the House of Delegates who have been able to halt these types of bills from moving forward by bottling them up in committees.

Del. Charniele Herring, D-Alexandria, the incoming House Majority Leader, will chair the House Courts of Justice Committee, and she said there is an appetite for change.

“We’re not going to be soft on crime, but we want our judicial system to be more efficient and more fair,” she said last month.

Democrats have filed more than two dozen criminal justice bills so far, including measures abolishing the death penalty and decriminalizing or legalizing simple possession of marijuana. There’s an emphasis on juveniles, with proposals such as exempting students from a disorderly conduct charge if they misbehave at school or on a school bus and creating an avenue for parole for juveniles sentenced to life in prison.

Sen. John Edwards, D-Roanoke, who will chair the Senate Courts of Justice Committee, filed a bill to bring back parole. The General Assembly abolished parole in 1994, requiring felony offenders to serve at least 85% of their sentences, with the potential to earn good-behavior credits toward an early release date. Edwards points to several issues with the elimination of parole, such as the high cost to the commonwealth providing health care to geriatric inmates.

Del. Rob Bell, R- Albemarle, who has been the chair of the House Courts of Justice Committee, said the commonwealth’s low violent crime rate, low recidivism rate and safe schools as indicators that the current laws are useful. Violent crime has declined dramatically across the country for nearly three decades, but researchers haven’t been able to agree on why it’s been happening.

“Those policies that would make our schools more dangerous or result in the early release of violent offenders are the ones that are certainly causing the most unease among those of us who have made public safety a priority in the last few years,” Bell said.

• Del. Michael Webert, R-Fauquier, filed House Bill 132 to remove a law that says it’s illegal to swear in public. It’s a Class 4 misdemeanor that carry a fine of $250.

• Del. Nick Freitas, R-Culpeper, has HB 225 that would require that the forfeiture of property used in connection to a crime will be held off until a person is found guilty of the crime.

• HB 128 from Del. Jason Miyares, R-Virginia Beach, would allow people to get their convictions on prostitution charges expunged if they were forced to engage in the activity.

• Del. Joe Lindsey, D-Norfolk, wants to increase the felony threshold for larceny and other property crimes from $500 to $750 through HB 101. Virginia increased its dollar amount to distinguish felony theft from a misdemeanor last year, but it’s still one of the lower amounts compared to other states.

Change is in the air at the General Assembly, where Democrats are preparing to come in with control of the legislature and executive branch and an eagerness to pass bills that have been blocked for years by the outgoing Republican majority. Some gun control measures, the Equal Rights Amendment, and expansion to voting rights seem certain, while there will be debate on redistricting. For more details, read Sunday's Roanoke Times.