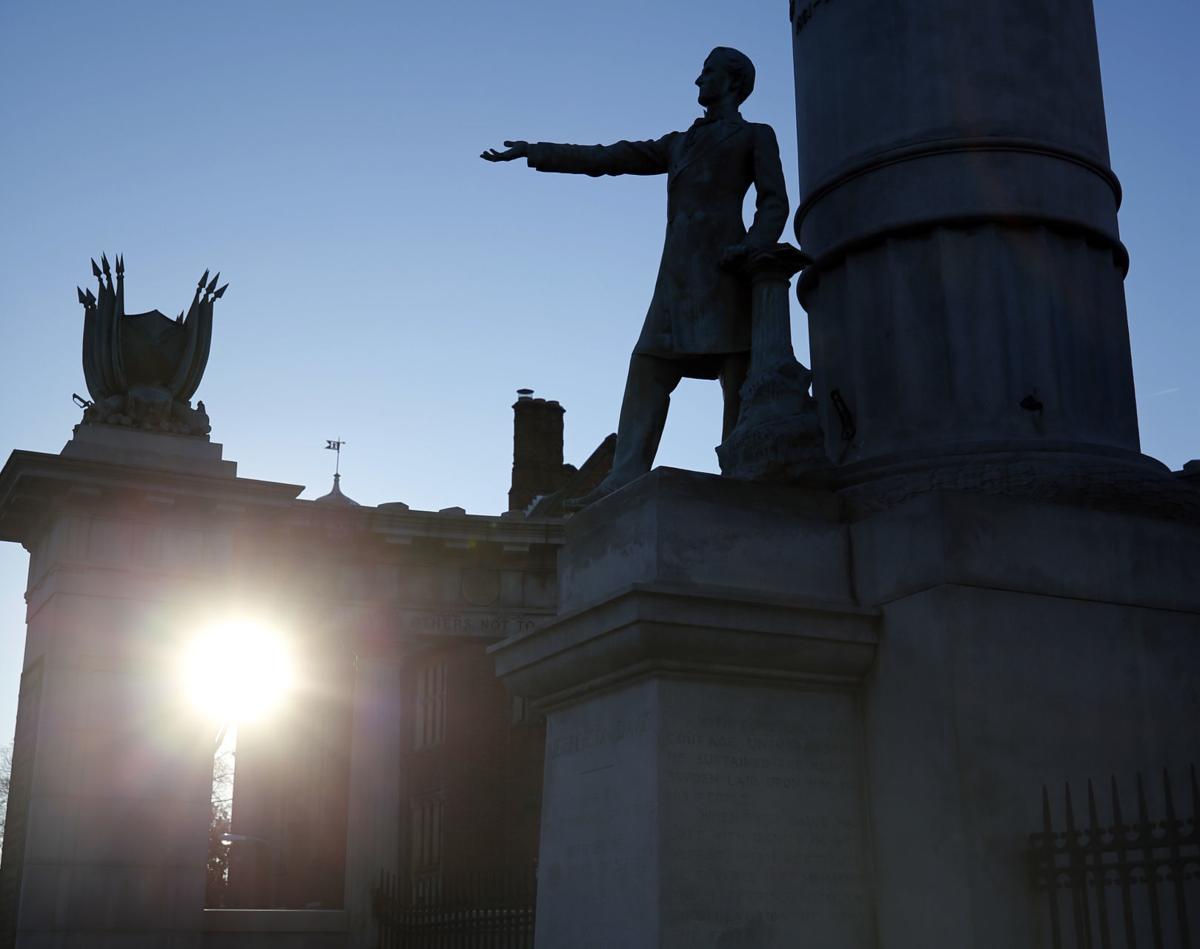 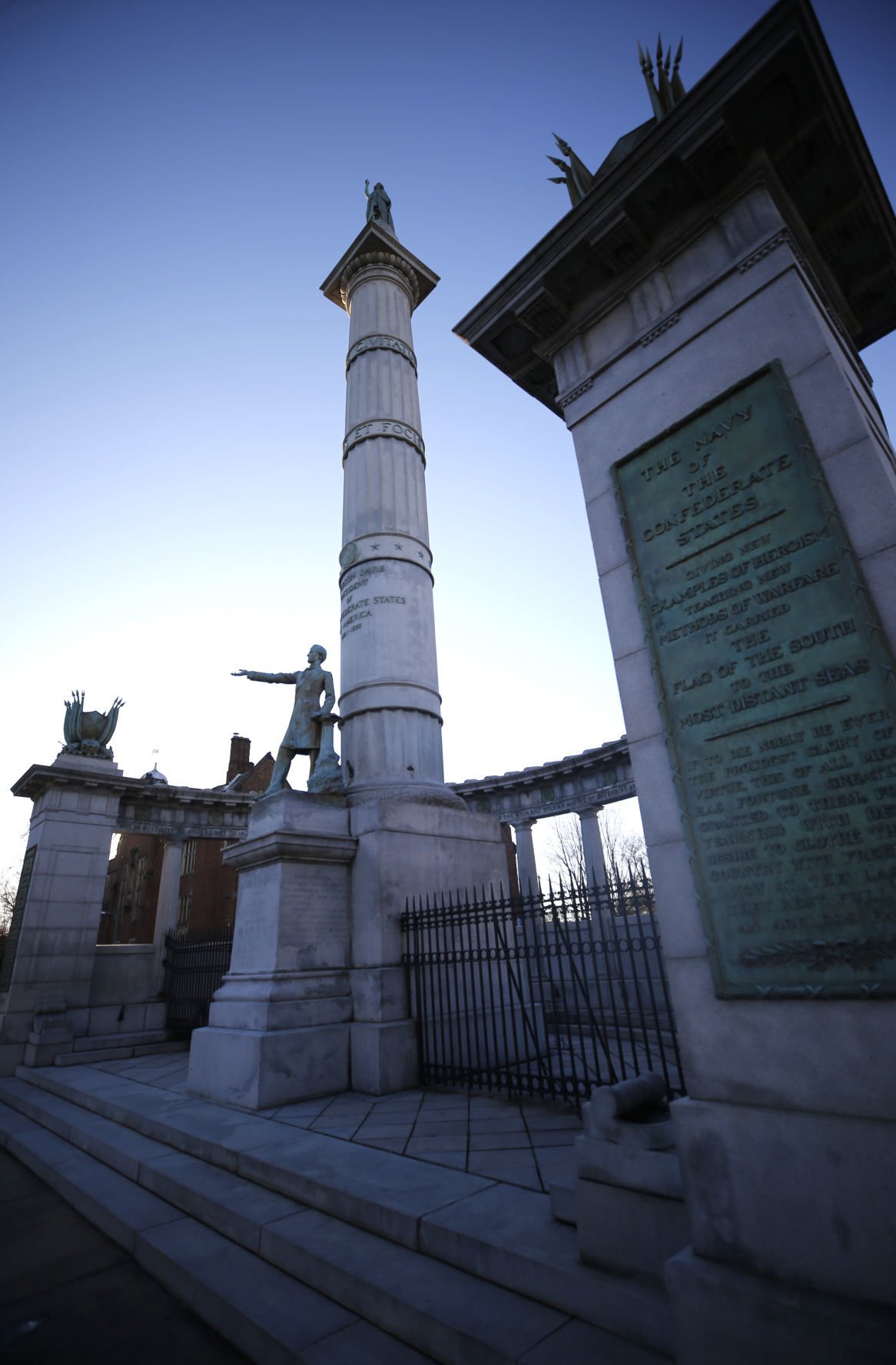 Confederate President Jefferson Davis’ statue was one of five unveiled on Monument Avenue from 1890 to 1929. 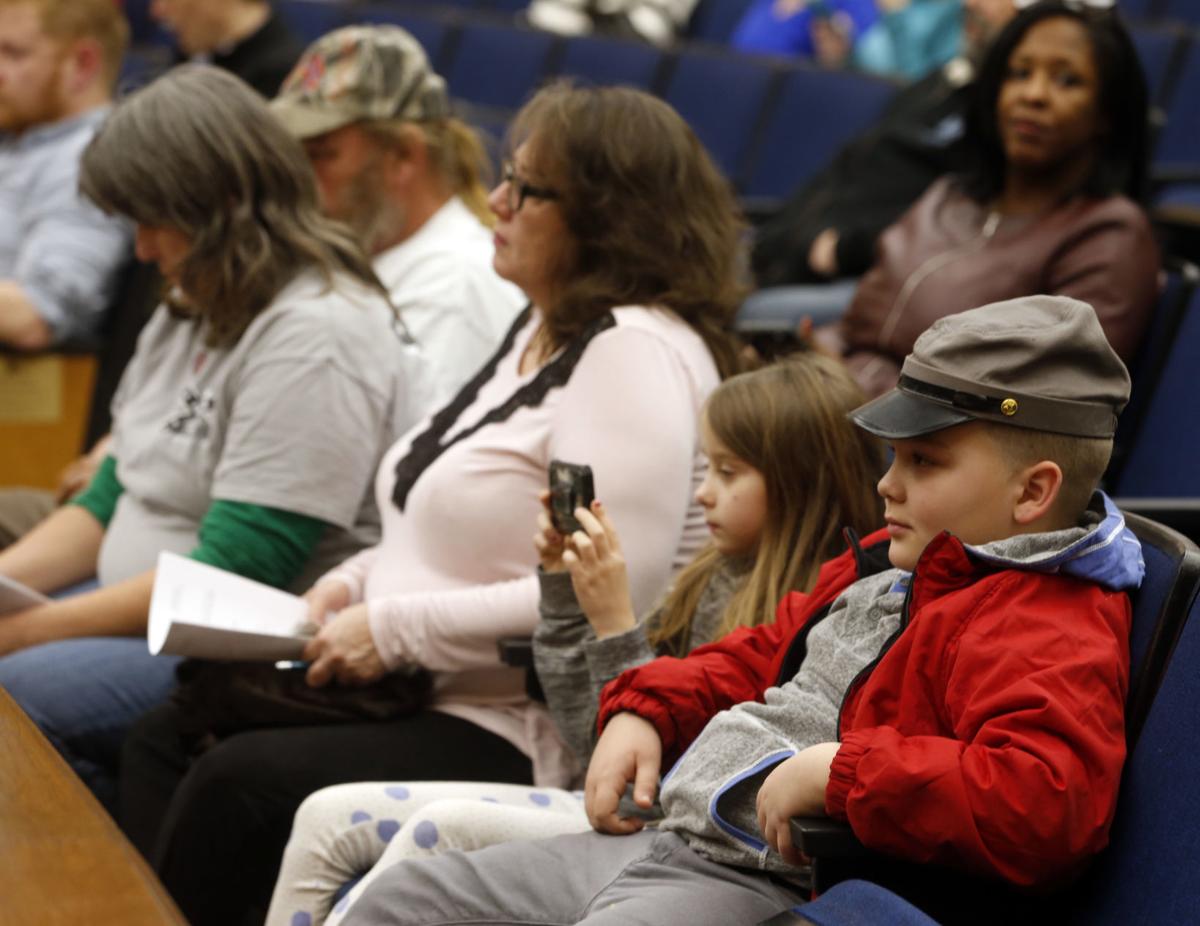 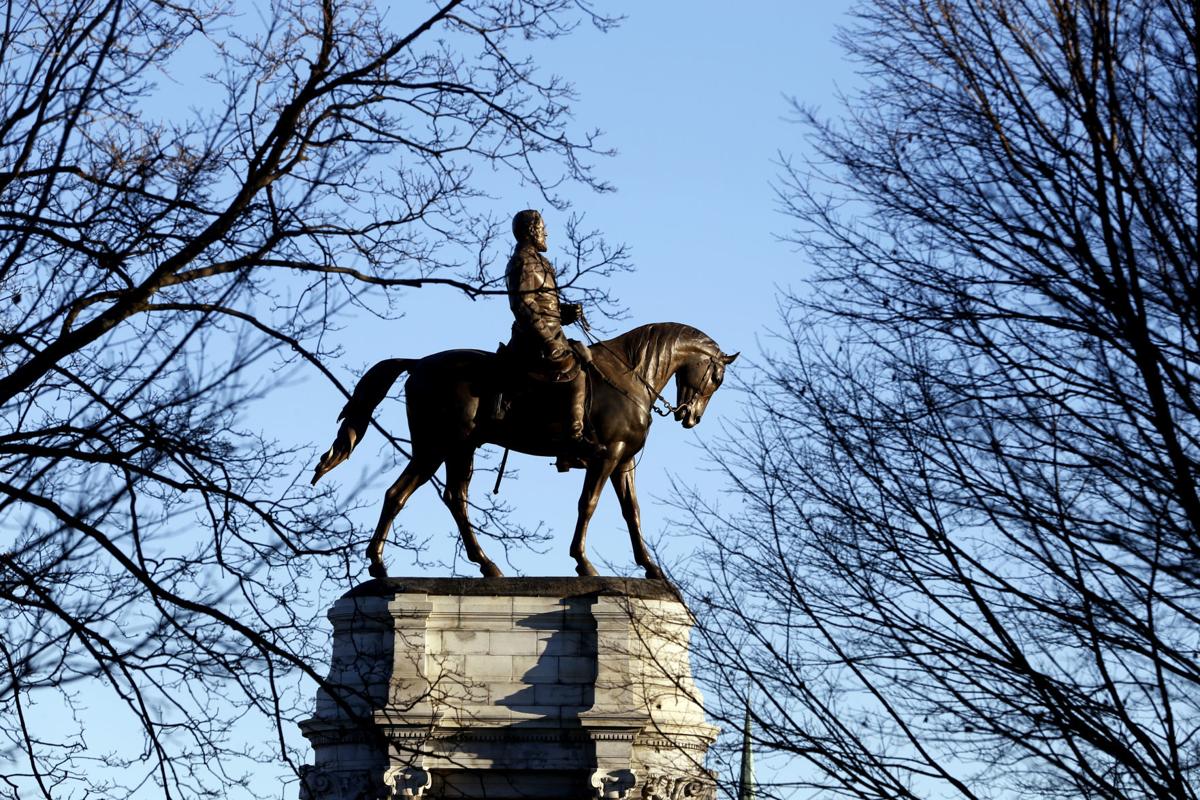 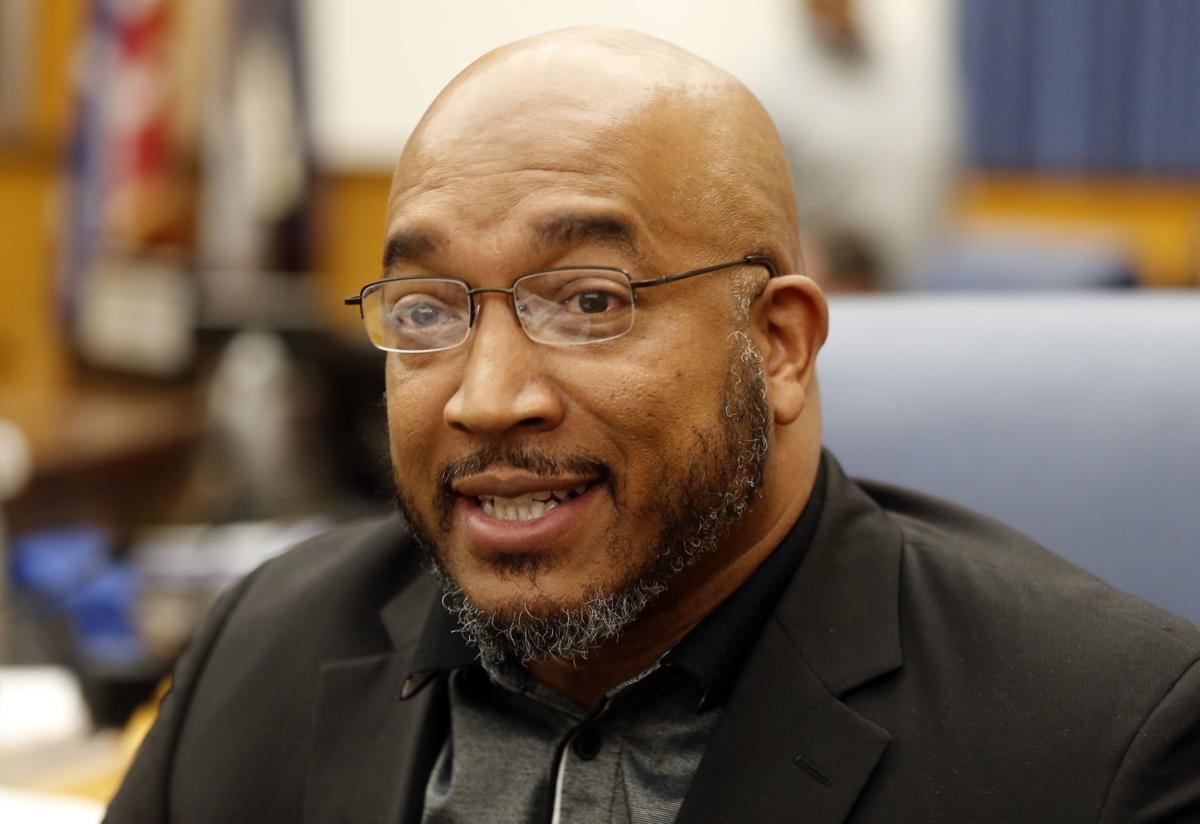 Councilman Michael J. Jones talks with reporters after his resolution passed during a special meeting of Richmond City Council. The measure is a resolution that requests control of statues from the state and give it to the city.

Confederate President Jefferson Davis’ statue was one of five unveiled on Monument Avenue from 1890 to 1929.

Councilman Michael J. Jones talks with reporters after his resolution passed during a special meeting of Richmond City Council. The measure is a resolution that requests control of statues from the state and give it to the city.

In a symbolic vote, the Richmond City Council has requested authority from the state to decide the fate of its Confederate iconography.

The 6-2 vote came at a special meeting Monday. It is an about-face for the nine-member body, which twice rejected similar requests earlier this term.

The decision came as the Virginia General Assembly prepares to convene its annual legislative session Wednesday. Proponents of removing Confederate statues expect a long-standing state law protecting them to be changed now that Democrats have assumed control.

“It’s not about tearing down statues. It’s not about erasing or changing history. That’s not what this is about,” said Michael Jones, the 9th District councilman who proposed the resolution making the request. “This is about us, as legislators, doing what we were elected to do.”

Opposing it were Councilwomen Kristen Larson of the 4th District and Reva Trammell of the 8th District.

Absent was Kim Gray, the 2nd District councilwoman who represents much of Monument Avenue, on which five Confederate statues were unveiled from 1890 to 1929. Gray said last week that she did not support Jones’ resolution and called it divisive. Gray’s liaison said she was unable to attend the meeting because she was at the hospital with her daughter.

State law limits local governments’ power to remove or modify war memorials. Attempts to overturn the law in recent years, after a deadly white nationalist rally in Charlottesville in August 2017, have failed. The Democratic-led efforts met resistance in what was then a Republican-controlled General Assembly.

But this year, Democrats will control the statehouse for the first time in nearly three decades. Proponents of removing or contextualizing the monuments — Jones among them — expect the upcoming session to spell changes for the state law in question.

At the local level, Jones has led the push on the issue. He has said he views the statues that line Monument Avenue as symbols of racism and white supremacy that need to be removed, a view supporters of his resolution echoed at a public hearing the council held before its vote Monday.

“What was divisive was these monuments being put up in the first place,” said Hilbert, who voted against two previous attempts Jones made to pass the resolution in December 2017 and October 2018.

“There’s a progressive majority [in the General Assembly] that’s likely to pass this,” Hilbert said, explaining his switch.

Others on the council stood pat.

Trammell has opposed each of Jones’ three efforts related to the issue. Asked about her vote Monday, she cited feedback she received from her constituents.

“I was getting calls and I could show you the texts where people said: Don’t we have other things to worry about? Our schools, our streets, our sidewalks, drainage — all of that. Why is this so important when they’ve been up 200 years? And it’s dividing us.”

“What I’ve said: Let the General Assembly decide. Why get us divided like this on council when we have other things that we should be focusing on right now that’s getting ready to come up? And that’s what my people are saying.”

“I don’t feel like this was on many people’s radar,” Larson said, citing the holiday season and the number of emails and calls she received in advance of the vote.

Fewer than 10 people spoke at a public hearing the council held before its vote. Opposition to the idea was sparse. Two people spoke against Jones’ resolution, and both identified themselves as residents from outside the region.

One speaker, Wendy Hayslett of Hampton, said Jones and the local branch of the NAACP, which supported his effort, “represent hate” and wanted to “dominate.”

Jones responded: “To say I represent or am for hate is a mischaracterization of who I am and what I stand for. ... I preach the gospel of Christ and the gospel of love and inclusion, not exclusion or hate, and I take offense to that.”

Mayor Levar Stoney wrote on Twitter after the vote: “I’m encouraged that the Richmond City Council has taken this important step to tell the VA General Assembly that localities like Richmond need the authority to determine and control public spaces which reflect their values in 2020, not 1920. Now the ball is in the GA’s court.”

The council vote pertained to monuments on city-owned property. The Robert E. Lee statue on Monument Avenue is on state property and would not be affected.