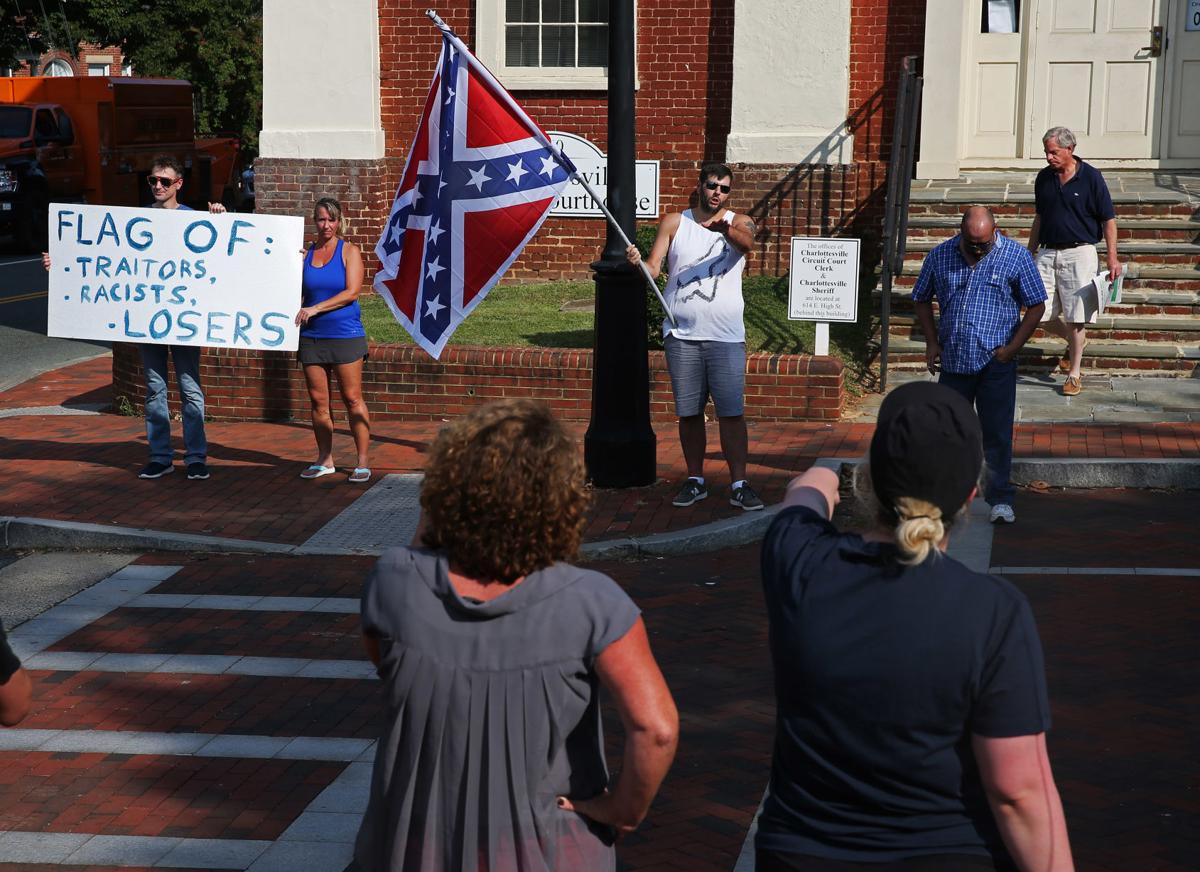 Counter protesters argue with Chris Wayne (back center) and Brian Lambert (back right) outside of Charlottesville Circuit Court on Wednesday. 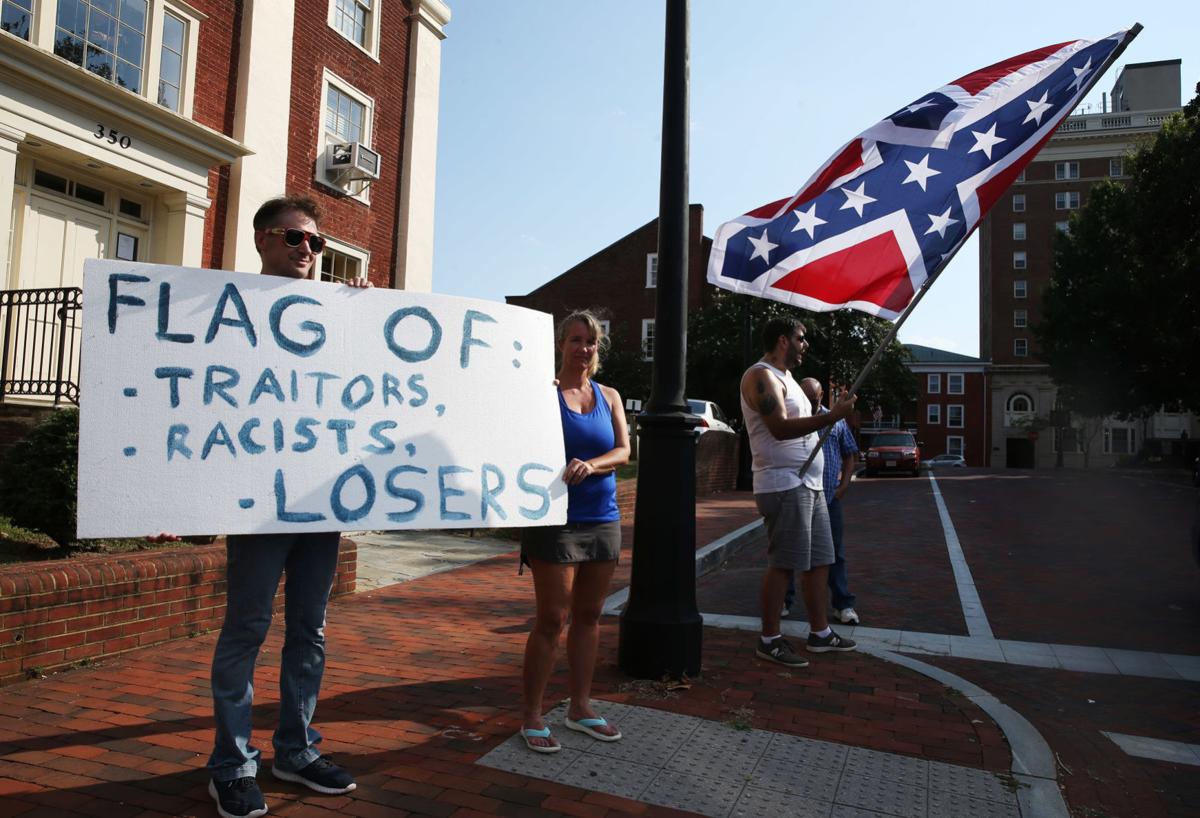 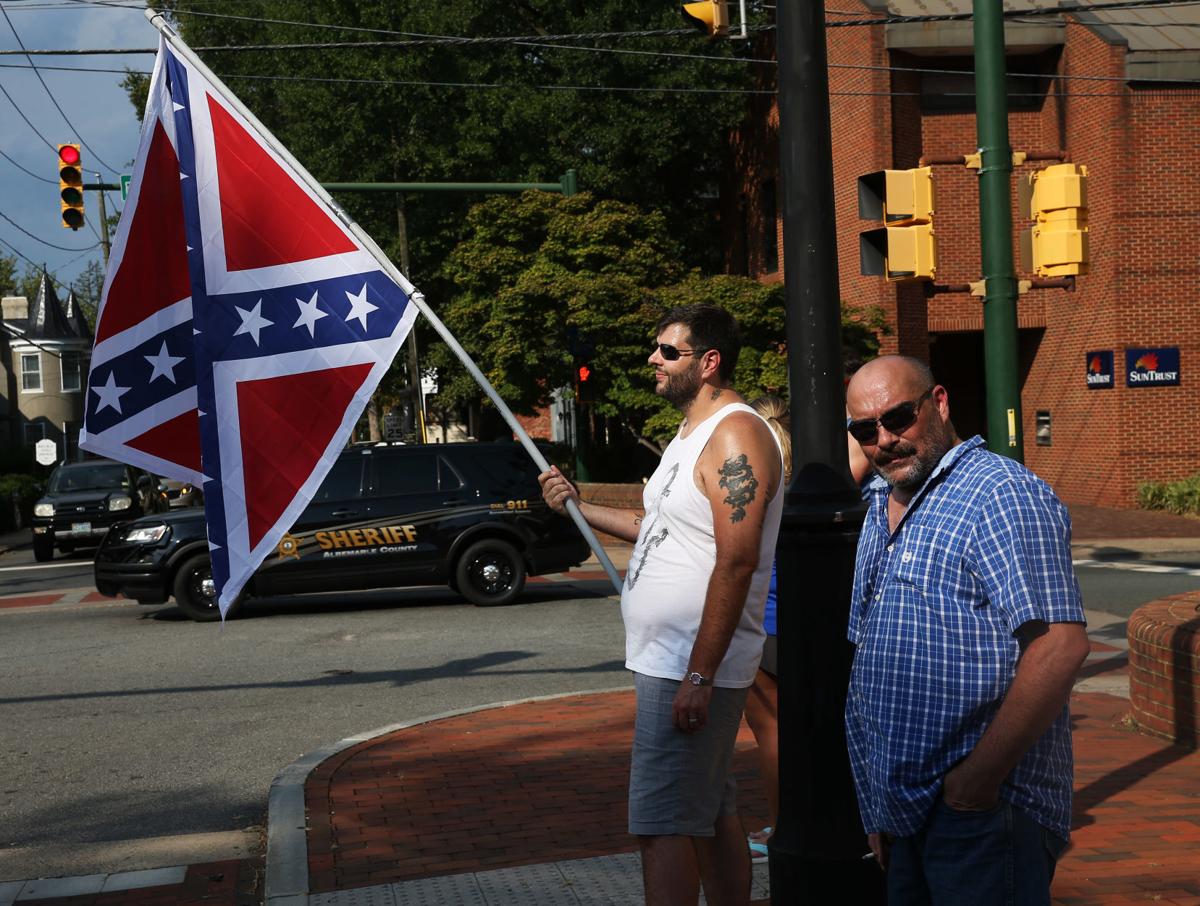 Counter protesters argue with Chris Wayne (back center) and Brian Lambert (back right) outside of Charlottesville Circuit Court on Wednesday.

A Charlottesville Circuit Court judge ruled two Confederate statues do not send a racially discriminatory message and issued a permanent injunction preventing their removal Wednesday on the first day of a three-day trial.

Spurred by a February 2017 Charlottesville City Council vote to remove a statue of Confederate Gen. Robert E. Lee, various area residents filed a lawsuit against the city and City Council. The lawsuit was later amended to add a vote to remove the statue of Gen. Thomas “Stonewall” Jackson. Since then, the case has dragged through the circuit court for 2½ years.

The first day of the trial started with Judge Richard E. Moore issuing an oral ruling on a motion for summary judgment on the defense's claim of equal protection. Presented formally this past spring, the defense argues that the statute preventing the removal of war monuments violates the equal protection clause of the 14th Amendment by sending a racist message to residents of color in Charlottesville.

Moore ruled against the defense and said that the statute has been amended several times since its 1904 introduction and is directed toward historical preservation, not sending a message of racial discrimination.

“I don’t think I can infer that a historical preservation statute was intended to be racist,” he said. “Certainly, [racism] was on their minds, but we should not judge the current law by that intent.”

Though the statues may represent a history that many do not like, they do not speak of hatred, he said, but people do.

Expanding his viewpoint, Moore said he also could not find that the statues denied equal access to any protected classes or stifled the voices of anyone in the community.

“I think the existence of these statues have given people a political voice they may not have had otherwise,” he said.

The equal protection defense was the last effort from the defendants to have the case dismissed.

Moore also granted a permanent injunction, preventing the removal, disturbance, violation or encroachment of the statues. The injunction had previously been temporary, issued soon after the lawsuit was filed in March 2017.

Wednesday marked the first day where many of the plaintiffs spoke about their motivations for the first time, expressing to the court their frustration with a political body they saw as ineffective. Of the 10 plaintiffs, eight testified to the emotional impact the votes and tarp shrouds had on them.

Each of the plaintiffs is seeking $500 in compensatory damages, and the plaintiffs’ attorneys are seeking about $600,000 in fees.

Fred Payne, the first named plaintiff, said he was shocked and angered when he first heard of the City Council’s vote to remove the Lee statue.

"I could not believe they would so obviously flout the law," he said. “It was repeatedly obvious I was living under the regime of an unlawful City Council."

Payne was further incensed when the city council shrouded the statues with tarps following the murder of Heather Heyer and the deaths of two Virginia State Police officers after the white supremacist Unite the Right rally.

Describing the tarps as a “ridiculous charade of mourning,” Payne said their presence caused him emotional distress, a claim repeated by every plaintiff who testified Wednesday.

Jock Yellott, a plaintiff and head of the Monument Fund — the group that has financed much of the lawsuit — choked up as he talked about the tarps. As a resident of Charlottesville for more than three decades, he said he had come to love the statues.

“I’m tearing up because it would just infuriate me that city council would slander Lee and hide the beauty of those statues under tarps,” he said.

Yellott helped found the Monument Fund with the intention of protecting not only the statues of Lee and Jackson, but other war monuments, as well, citing the Vietnam memorial in McIntire Park in particular. Like most of the plaintiffs, Yellott said he would donate the $500 he could receive to the Monument Fund, which is also listed as a plaintiff.

The only plaintiffs not attached to the Monument Fund are The Sons of Confederate Veterans and their heritage defense coordinator, Frank Ernest.

Though not a resident of the area, Ernest said his job is to protect monuments and statues to Confederate veterans. He estimated his organization has spent $180,000 in attorneys fees in this case so far. No individual plaintiffs have paid any attorneys fees.

Ernest also claimed the shrouds had encroached on his ability to enjoy the statues, describing the tarp shrouds as “undignified.”

“It struck me that they had covered them from view in a first step toward removing them,” he said.

Ernest is not the only person with Confederate ties to feel the shrouds should not have been placed.

Chris Wayne and Brian Lambert, who were both arrested and convicted of destroying the tarps during the 188 days they covered the statues, stood outside the courthouse Wednesday, yelling at passerby.

Wayne, waving a large Confederate battle flag, soon entered into a screaming match with activists who showed up to counter his message. No arrests were made, but the screaming from both contingents could be heard in the courtroom.

Most of the plaintiff's witnesses for damaged testified by the end of Wednesday’s hearing. When the trial resumes at 10 a.m. Thursday, the defense will be allowed to call any witnesses they may have, and attorneys fees are expected to be argued.