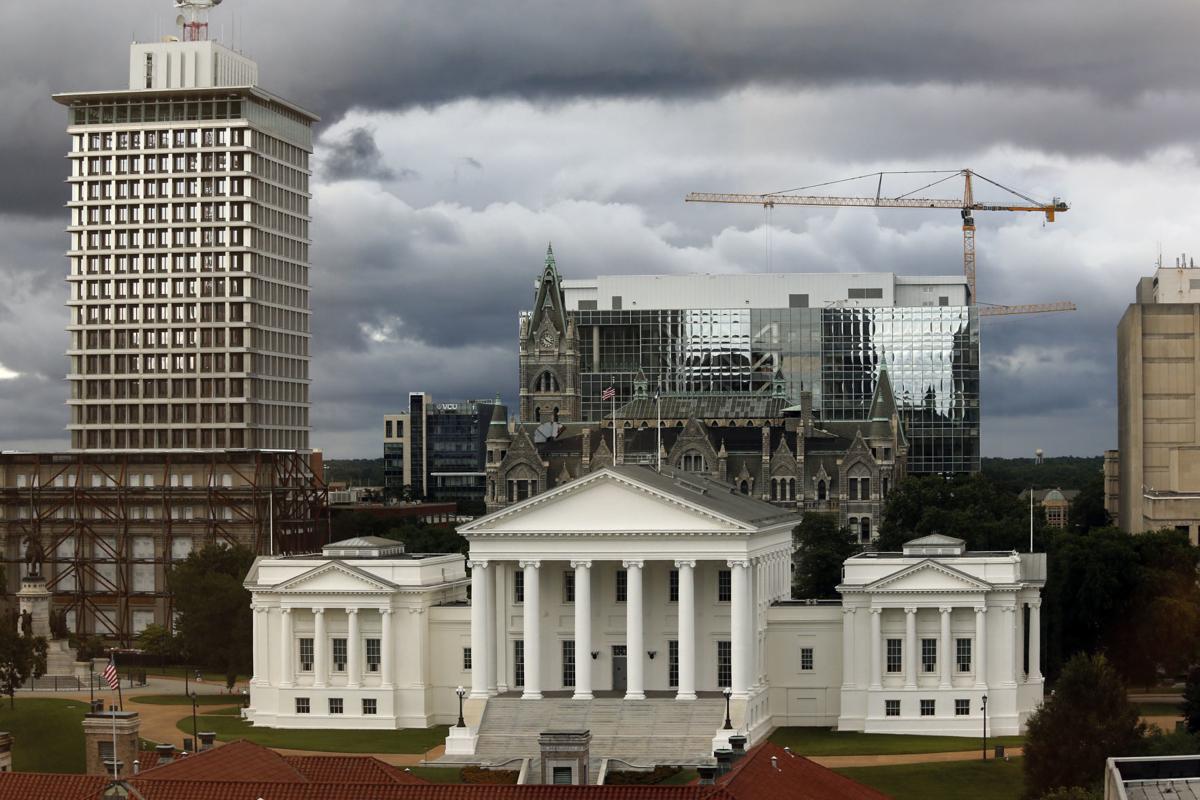 Storm clouds gathered over the state Capitol July 8 ahead of the brief special session on gun violence. 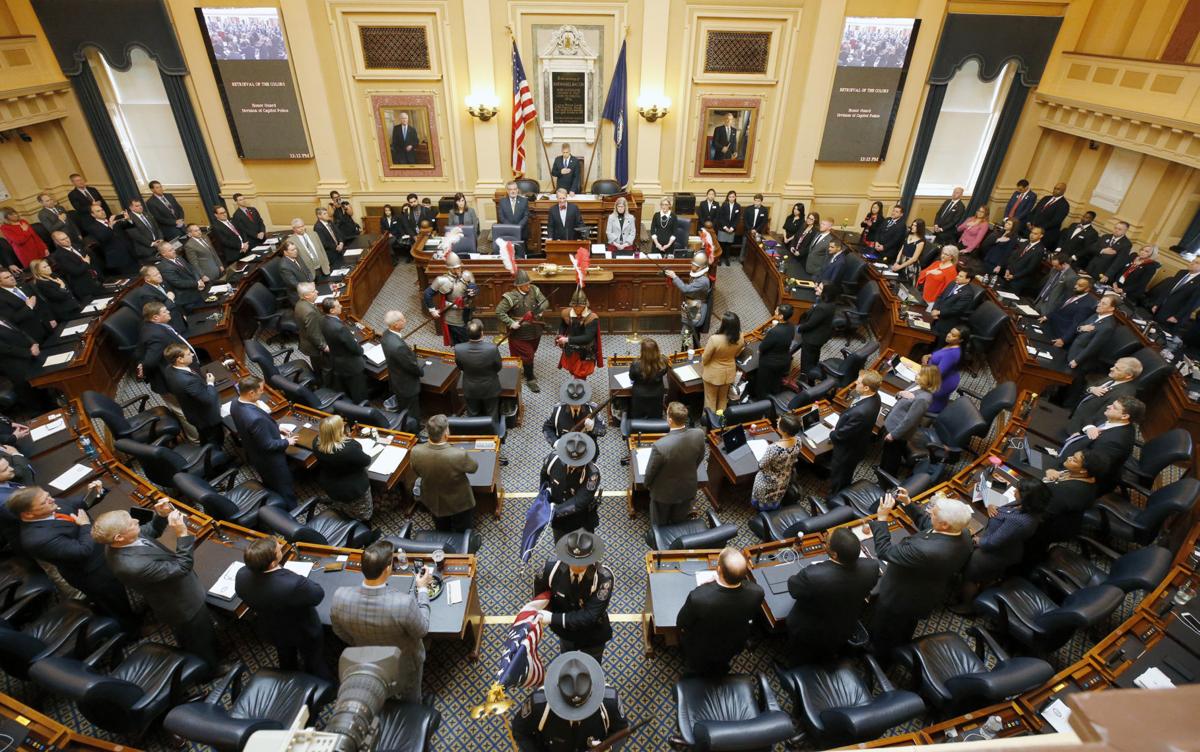 The Capitol Police Honor Guard (foreground) retired the colors after the opening ceremony of the Virginia House of Delegates on the first day of the 2019 General Assembly session. 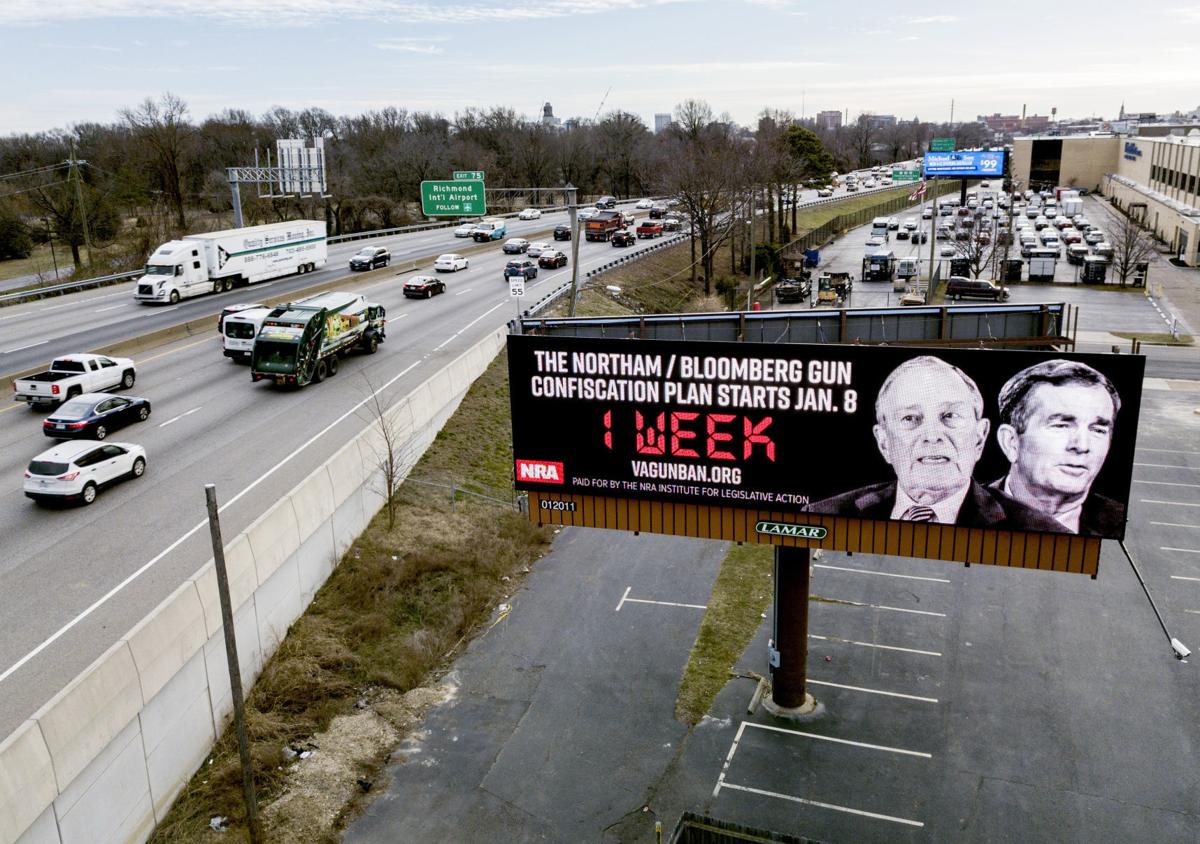 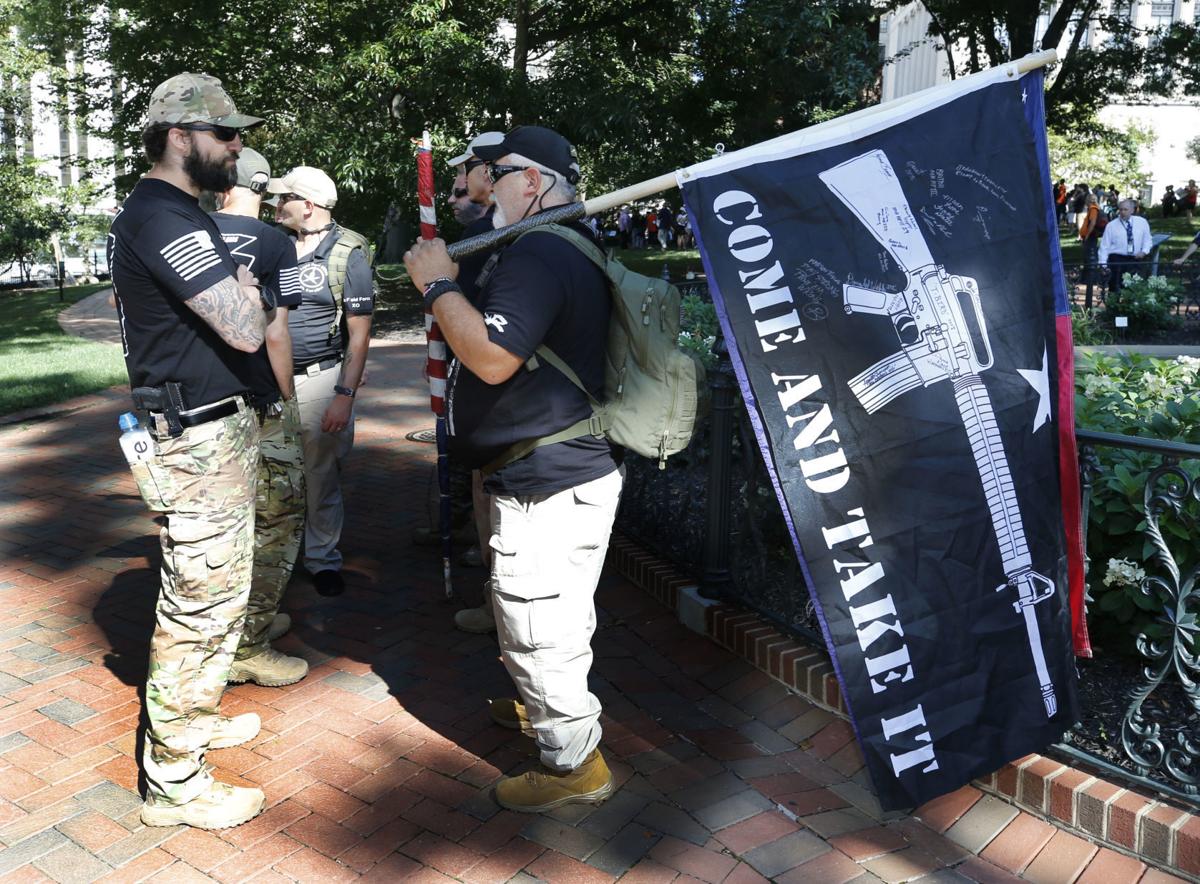 Gun rights supporters Jason Thomas of Pittsburgh, L, and Larry Lewis from the Shenandoah Valley area (holding flag) were two of a handful of counter protesters during a rally against gun violence held on the Virginia State Capitol grounds on Tuesday, July 9, 2019. Gov. Ralph Northam has called the legislature into special session to deal with the issues after 13 people were gunned down in a Virginia Beach mass shooting in May. 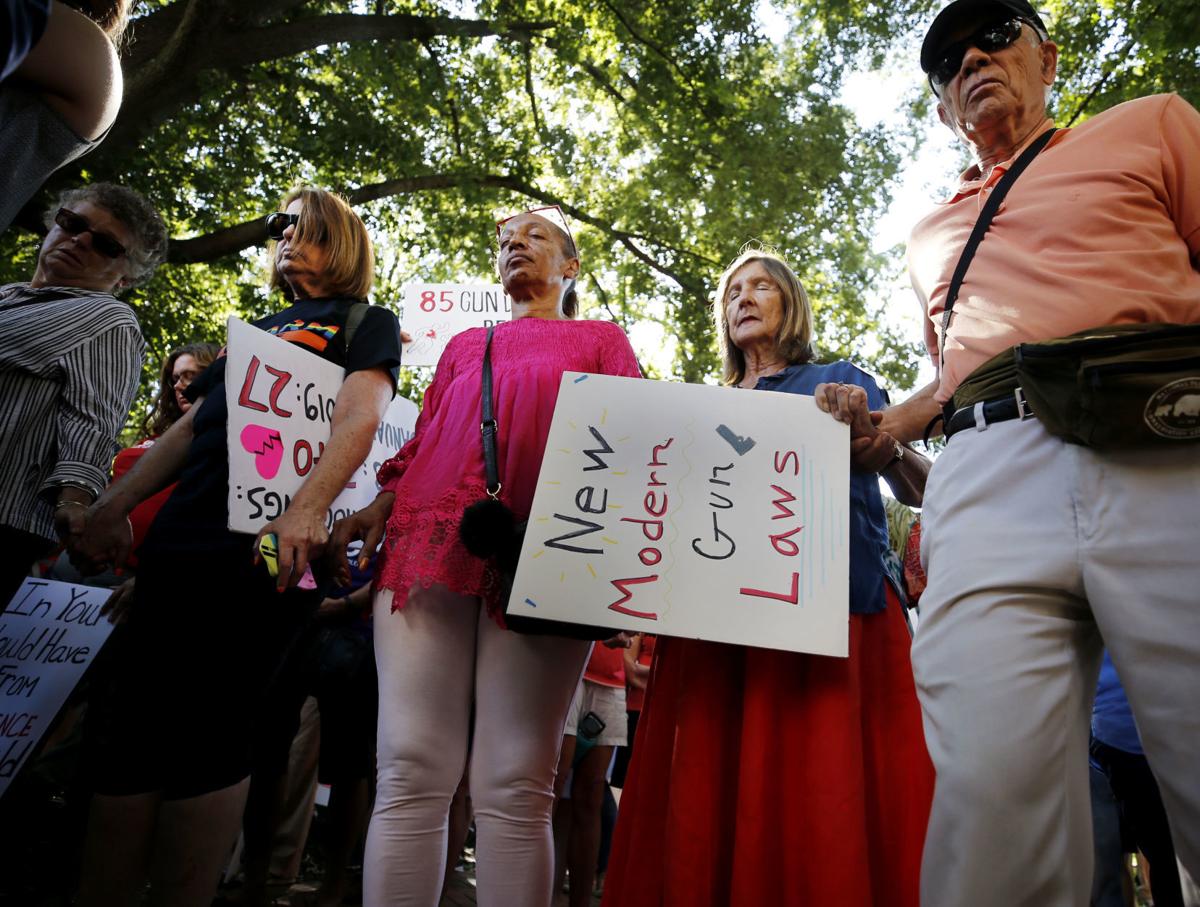 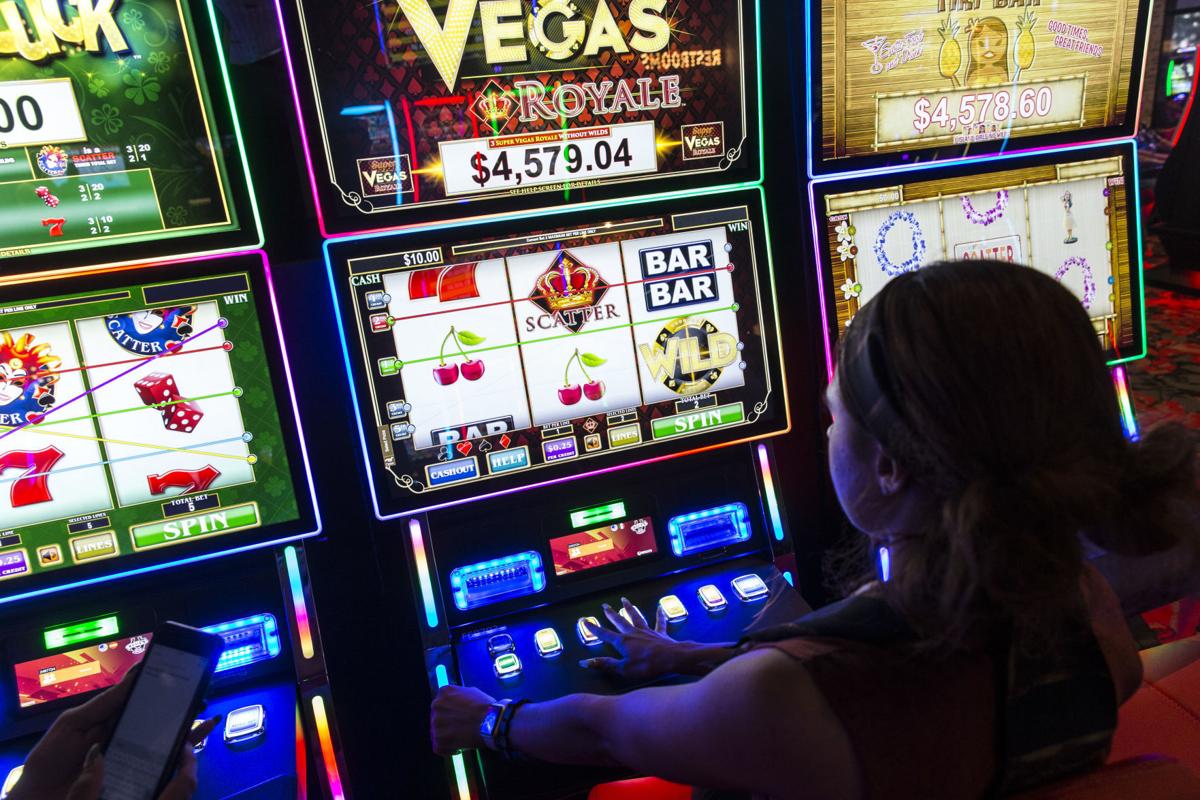 Adalyn Diaz of Richmond attended the grand opening of Rosie’s Gaming Emporium in Richmond in July. 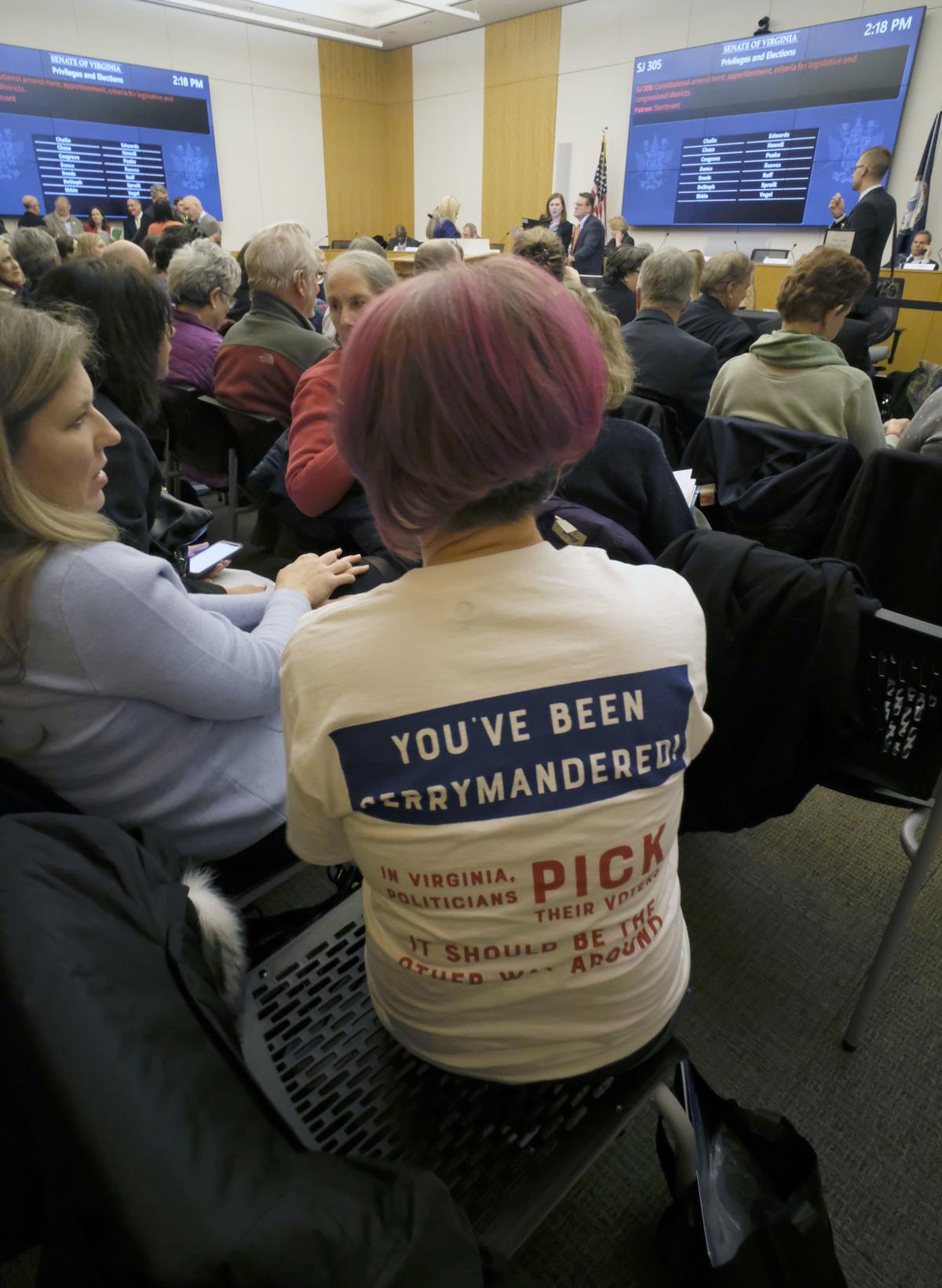 The Senate Privileges and Elections Committee took up several redistricting measures during the 2019 session. 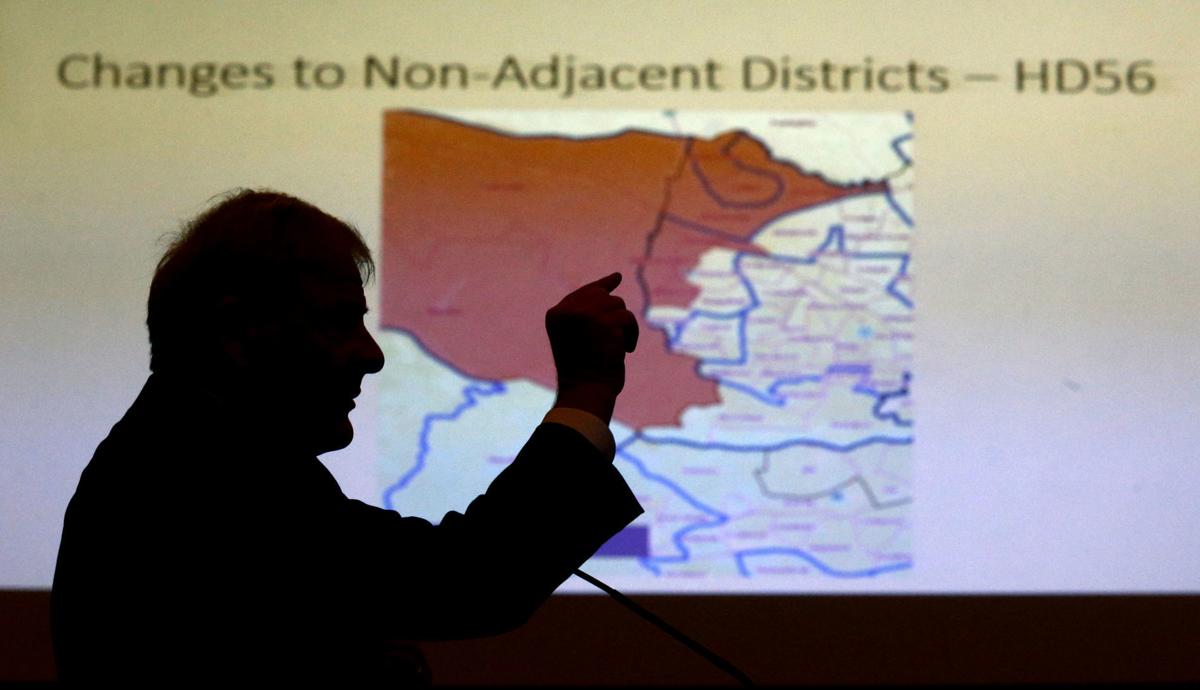 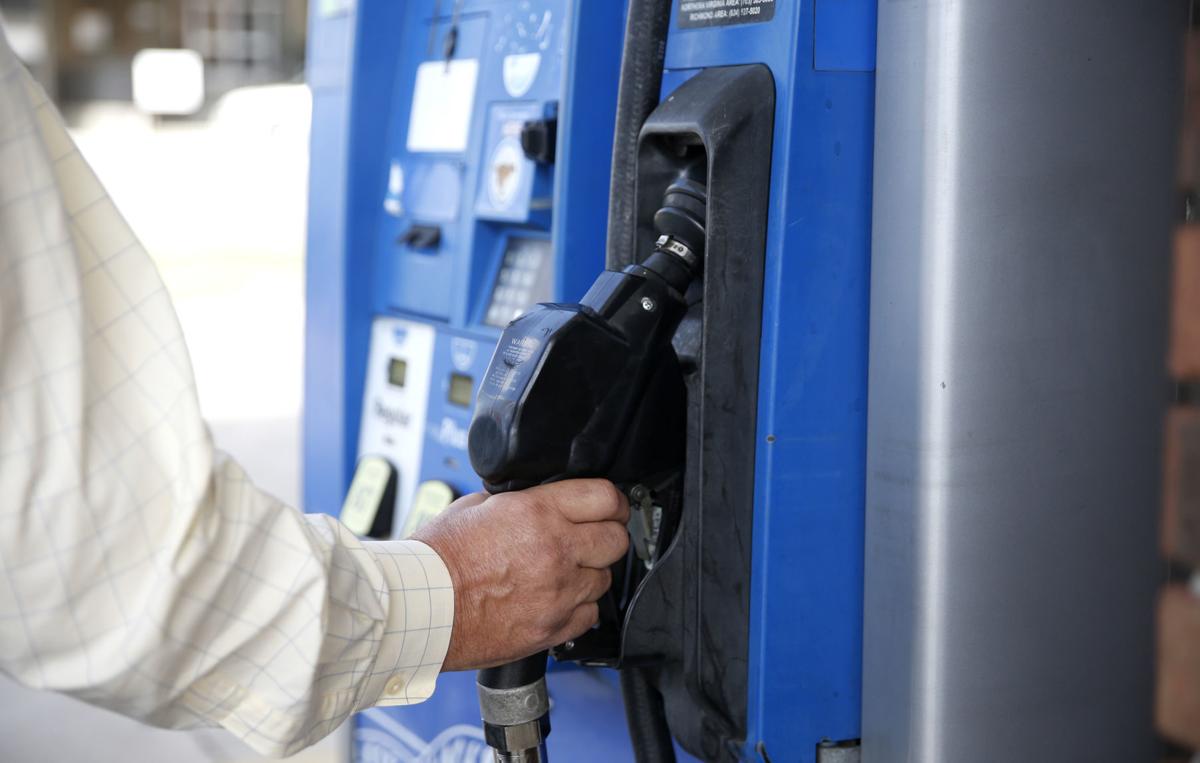 Storm clouds gathered over the state Capitol July 8 ahead of the brief special session on gun violence.

The Capitol Police Honor Guard (foreground) retired the colors after the opening ceremony of the Virginia House of Delegates on the first day of the 2019 General Assembly session.

Gun rights supporters Jason Thomas of Pittsburgh, L, and Larry Lewis from the Shenandoah Valley area (holding flag) were two of a handful of counter protesters during a rally against gun violence held on the Virginia State Capitol grounds on Tuesday, July 9, 2019. Gov. Ralph Northam has called the legislature into special session to deal with the issues after 13 people were gunned down in a Virginia Beach mass shooting in May.

Adalyn Diaz of Richmond attended the grand opening of Rosie’s Gaming Emporium in Richmond in July.

The Senate Privileges and Elections Committee took up several redistricting measures during the 2019 session.

RICHMOND — The start of a new decade is propelling Virginia into a new era of political control, a reality that will be on full display Wednesday when lawmakers return to Richmond for the start of a 60-day General Assembly session.

Democrats who will take over the House and Senate are eager to move ahead on their agenda, as Republicans work to push back while exploring how they might chart a return to power.

It will be the most racially and ethnically diverse legislature in Virginia’s history, and for the first time, a woman will be at the helm of its lower chamber.

Here’s a look at some of the key issues lawmakers will grapple with in the session.

Democrats enter the session with what they perceive as a mandate from voters to take broad action on gun control. That has sparked furor from some conservatives who have moved quickly to decry some of the proposals as unconstitutional “gun bans.”

As gun rights activists warn of far- reaching measures, Gov. Ralph Northam has said without deviation that he plans to back what he terms eight “common sense” proposals that have broader support. The day after the Nov. 5 elections, Northam said he plans to reintroduce measures he proposed after a Virginia Beach city employee fatally shot 12 people May 31.

One measure is the expansion of background checks, which even some Republicans back. So-called red flag laws that would allow courts to quickly remove guns from people deemed a risk to themselves or others have been enacted in dozens of other states, including some under Republican control.

Northam is also proposing a ban on assault weapons to include suppressors and bump stocks, a ban on high-capacity magazines, and to restore a state law, repealed in 2012, to restrict handgun purchases to one a month, among other measures.

Expect tension among Democrats regarding proposals outside of the ones backed by Northam, like training requirements for firearm purchases, firearm prohibitions in more places and events, and an expanded definition of “assault weapon.”

Don’t expect gun activists to go along quietly. Motivating their base are highway billboards and signs warning about the governor’s gun control efforts, and “Second Amendment sanctuary” proclamations adopted in more than 100 counties, cities and towns.

Leaders of gun rights groups are banking on the tension to yield a massive grassroots demonstration that they say will draw tens of thousands of people to the Capitol grounds on Jan. 20, the legislature’s lobby day.

“We are going to pound them like they’ve never been pounded,” Philip Van Cleave, head of the Virginia Citizens Defense League, said recently.

The centerpiece of the legislative session will be the passage of a two-year state budget setting spending priorities under Northam and the new Democratic majority. That includes $200 million the governor proposed for the legislature to spend as it likes. The proposal is part of the $135 billion budget that he unveiled last month, including $47.5 billion in general fund spending for core state services such as public education, safety and health care.

Northam has proposed two tax increases, one on motor fuels and another on cigarettes — in a state in which tobacco was a mainstay of Virginia’s economy dating to the Colonial era.

The motor fuel tax would rise 4 cents per gallon annually for three years — for a total increase of 12 cents per gallon — and then be tied to inflation. The increase would bolster the state’s transportation trust fund against a projected decline in fuel tax revenues because of electric and hybrid vehicles that use less gas but still rely on Virginia’s road network.

Northam is betting that Virginians will support the tax increase to see improved roads and less traffic, but there’s also a sweetener.

The gas tax increase would be partly offset for Virginia residents by the governor’s proposals to eliminate annual state vehicle inspections and halve the yearly vehicle registration fee. Northam says those measures would save consumers $280 million a year, while shifting more of the cost of transportation improvements to out-of-state drivers.

The governor proposes to double the state’s 30-cent-per-pack tax on cigarettes — the second-lowest in the country — and use the money to lower health insurance premiums through a new state insurance marketplace and a reinsurance program to cover high-cost health care consumers.

Henrico County-based Altria, the largest tobacco company in the country, already came out in opposition of the plan. Expect it to wield its influence as the plan moves through the legislature.

Northam and state lawmakers are also looking to protect existing sources of state revenues, such as the Virginia Lottery, which contributed more than $600 million in profits last year for public education. Northam called for state regulation and taxation of unlicensed electronic “skill” games that have proliferated across the state and cut sharply into lottery sales, revenue that he wants to offset by $125 million over two years in new taxes.

Northam is leaving it up to legislators to figure out exactly how.

The assembly also will consider banning the machines entirely, even as it debates legalizing casino gambling in Virginia. Legislation already has been filed to re-enact measures adopted last year to allow casinos in as many as five cities — Richmond, Norfolk, Portsmouth, Danville and Bristol — but a new state study shows the biggest potential payoff in Northern Virginia. If casino gambling is allowed, the lottery is likely to be tasked to devise a system for licensing the operations, regulating and taxing them, and potentially sports betting and online gaming.

The gaming debate also will require the state to consider how to protect vested interests such as Colonial Downs, which was first out of the gate in opening gaming parlors in Richmond and three other localities for “historical horse racing” devices that look like slot machines. The Pamunkey Indian tribe also is looking to protect its ability to operate a casino in Norfolk or Richmond under federal law.

As Virginia schools continue to face funding levels below what they were before the Great Recession, legislators will consider increasing education spending and making community college free for some students.

Northam’s budget calls for a 3% raise for teachers, free community college for low- and middle-income students pursuing careers in high-demand fields, and raising the number of state-funded preschool slots for 4-year-olds, among other things.

Beyond funding, lawmakers will weigh how to address the disproportionate discipline rates students of color face and the decrepit nature of many school buildings.

A Democrat-led effort to prohibit students from being found guilty of disorderly conduct for actions in school was killed last year and is again proposed this year. Sen. Bill Stanley, R-Franklin County, is renewing his call for a special state fund for schools to repair or replace roofs, as well as his push for a statewide referendum on whether the General Assembly should take out $3 billion in bonds in the name of improving school facilities — roughly 60% of which are more than 40 years old.

Ahead of the 2021 redistricting process, lawmakers are due to take a second stab at a proposed constitutional amendment that would shift power over the drawing of legislative and congressional districts from the General Assembly to a 16-member commission of legislators and citizens.

In order to take effect, a proposed state constitutional amendment has to pass the legislature in separate years, then pass in a statewide voter referendum.

When in the minority, many Democrats championed nonpartisan redistricting and majority Republicans opposed it, but a compromise measure passed overwhelmingly last year. Some members of the Legislative Black Caucus opposed the proposed amendment, saying that the measure does not require any of the members on the redistricting commission to be African American or from other minority communities.

The future of the amendment — which had seemed like a done deal, or a likely possibility — is now anyone’s guess. House Speaker-designee Eileen Filler-Corn won’t say where she stands on the measure. Democratic Party of Virginia Chairwoman Susan Swecker proclaimed on Twitter, “We want non-partisan redistricting but this is not it.”

Advocates of the measure say a messy approach could push the amendment through with a mishmash of Democratic and Republican support strung together on the House and Senate floors.

If the measure is tossed for good, Democrats could pitch legislation to create a bipartisan process that addresses concerns from some members and isn’t as binding as a constitutional amendment.

Expect Northam to pay close attention to the wheeling and dealing, since he has a campaign promise to live up to. On the campaign trail in July 2017, he pledged: “I will not sign a map unless it is drawn by a nonpartisan redistricting commission.”