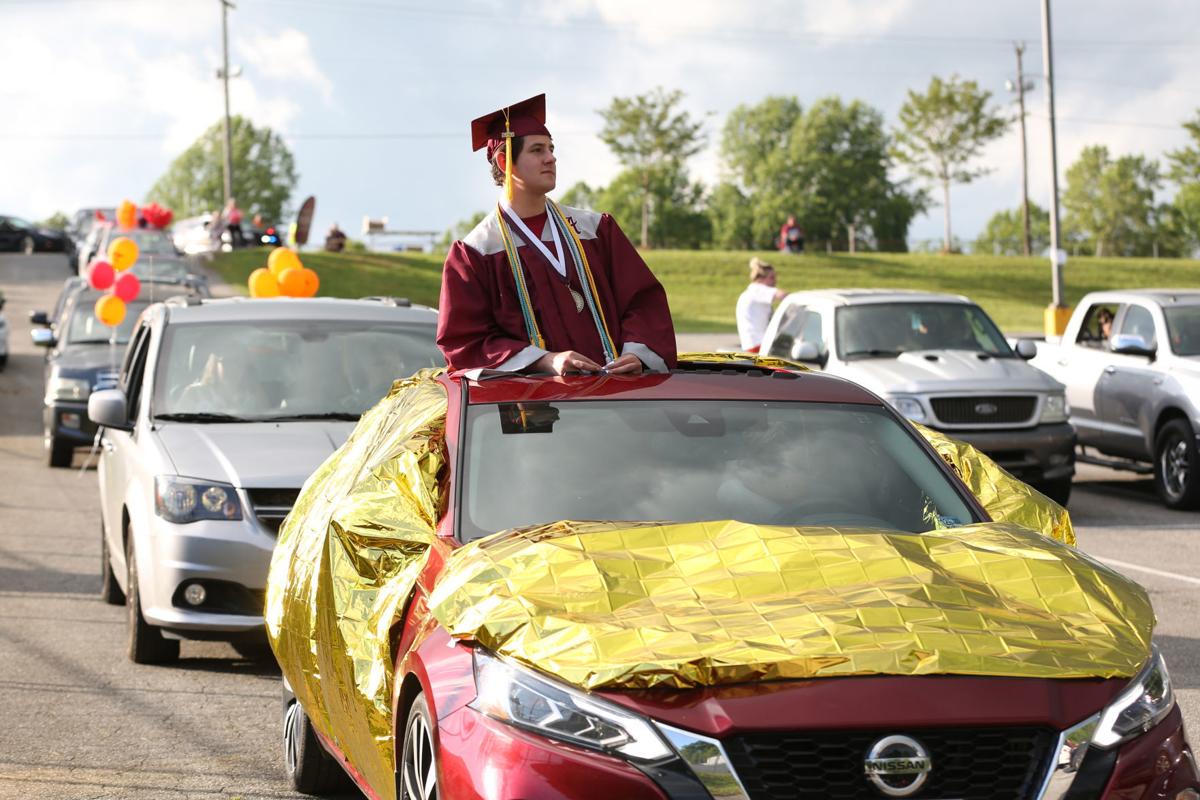 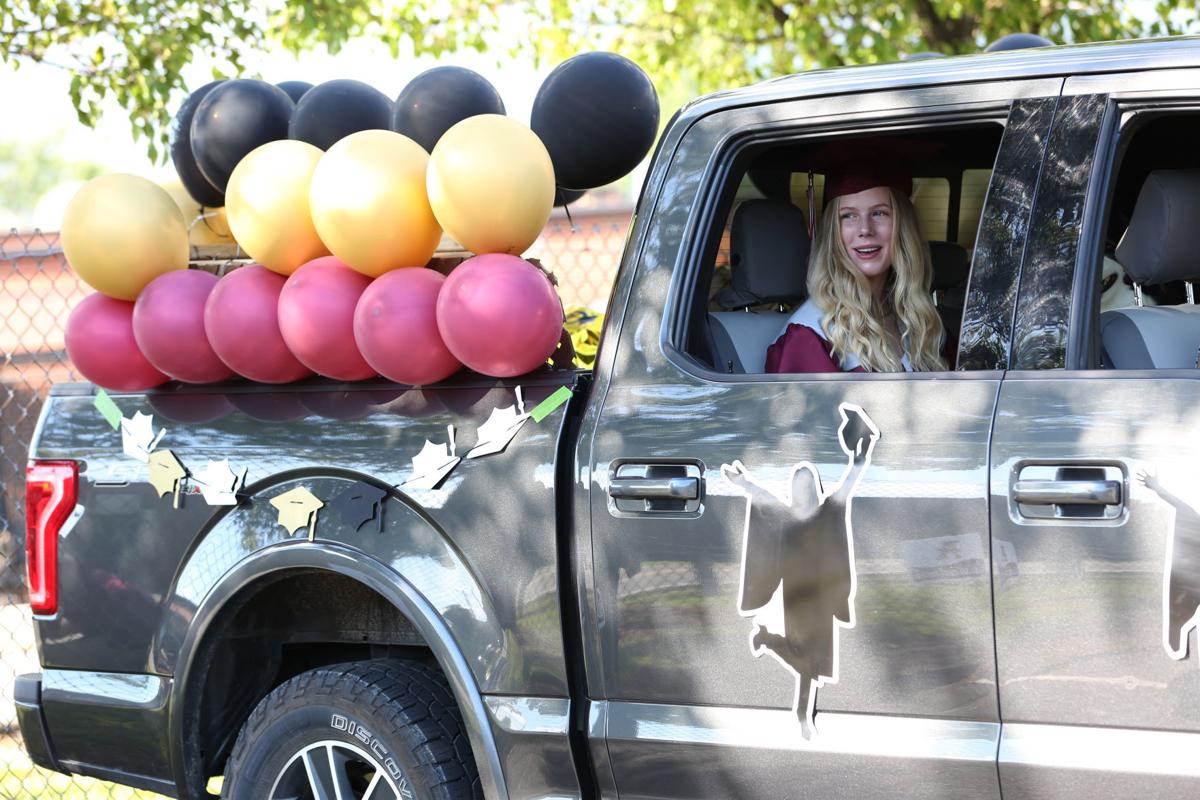 Savannah Tysver rides in the back seat of a pickup truck with her dog during the graduation ceremony at Amherst County High School. 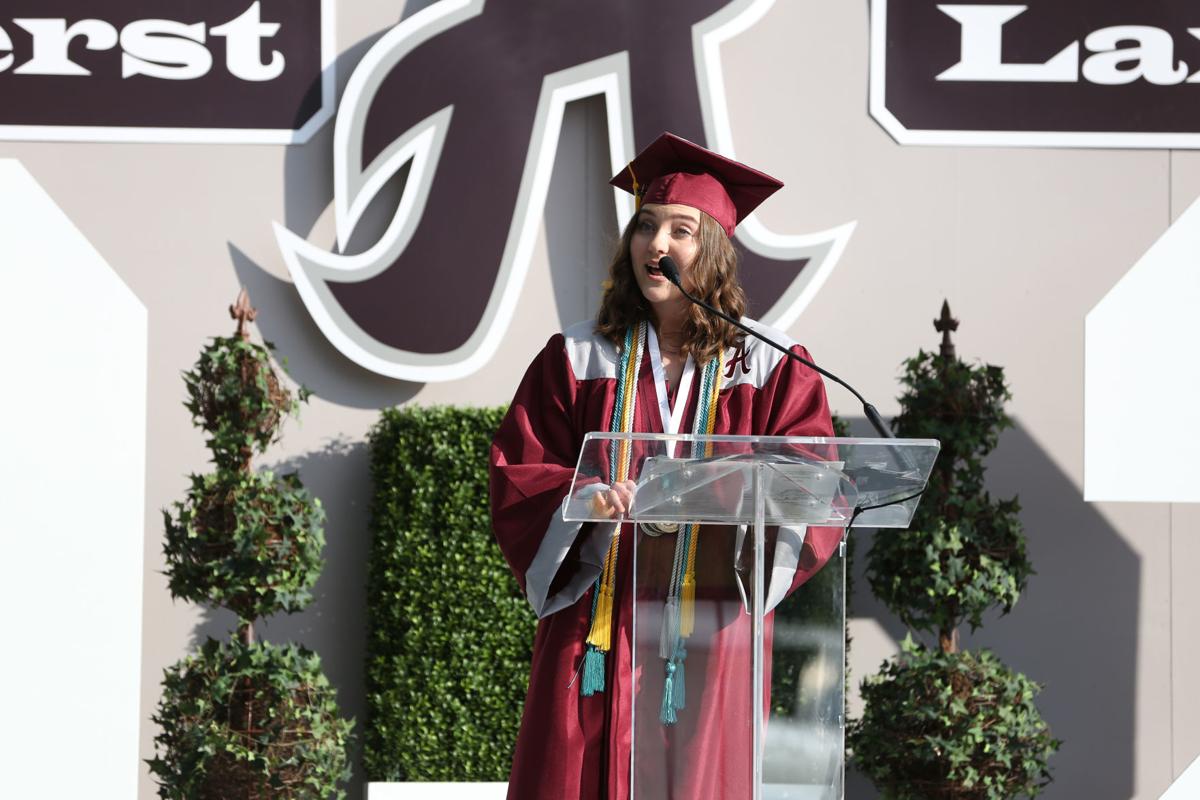 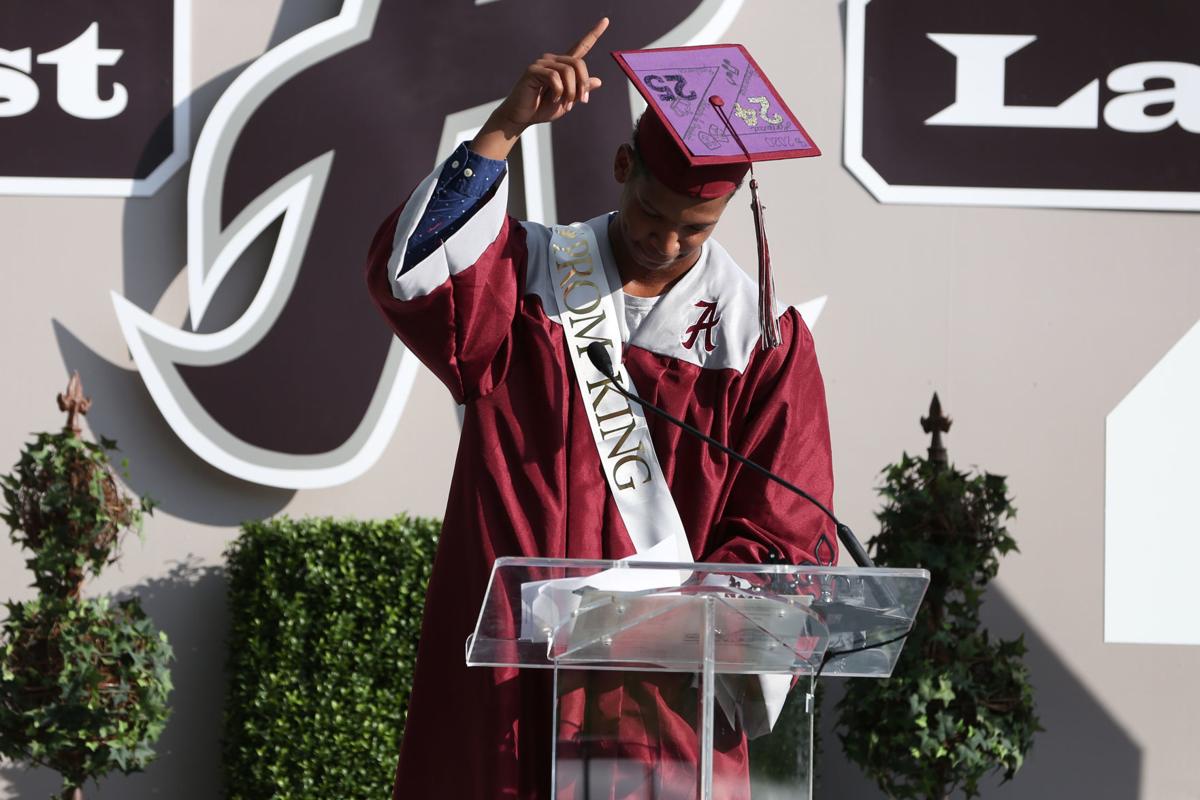 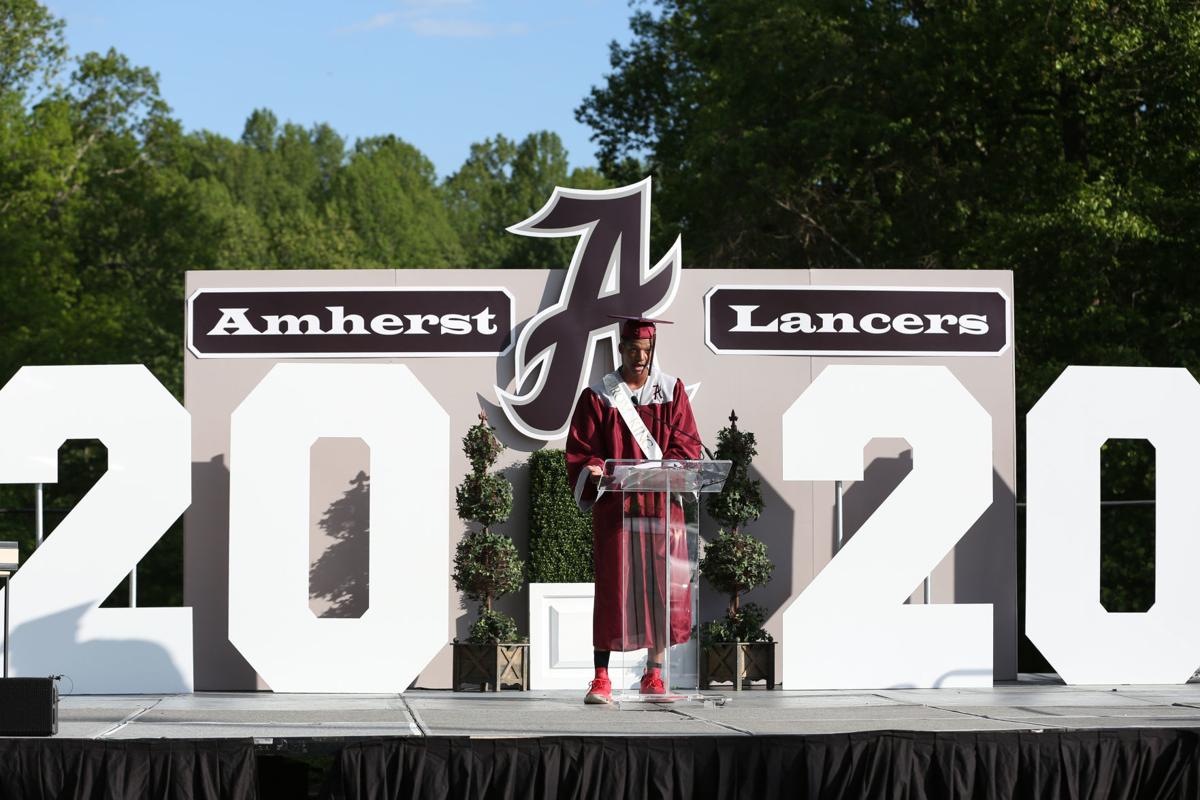 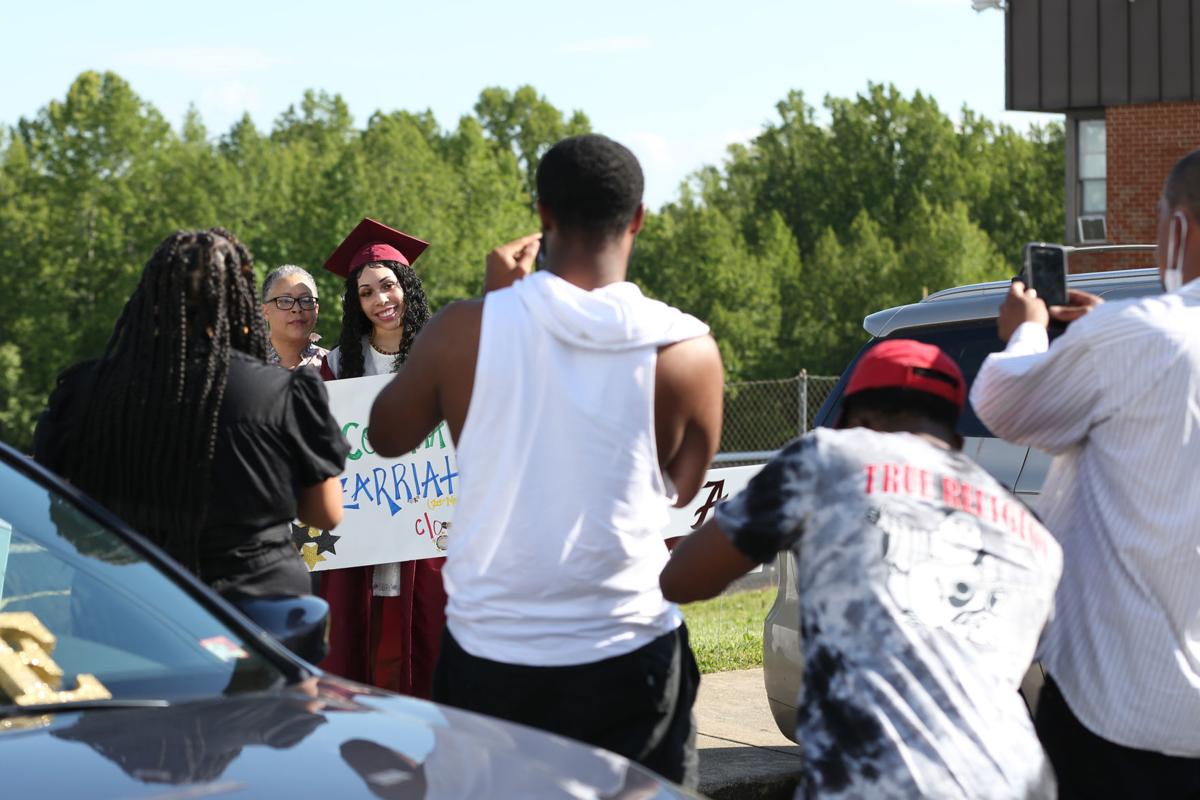 Zarriah O’Bannon (in cap and gown) poses for a photo at Amherst County High School during a graduation ceremony Saturday. The “Commencement in Cars” ceremony marks the school’s 64th commencement. 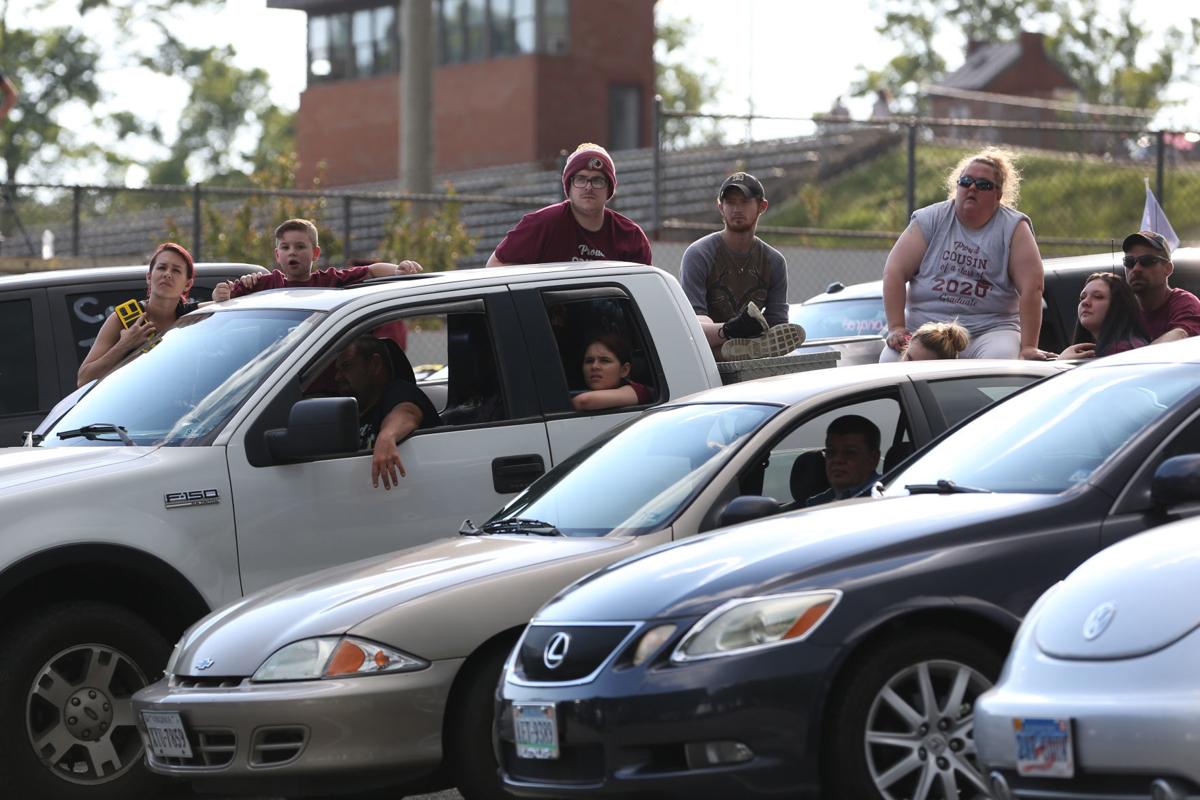 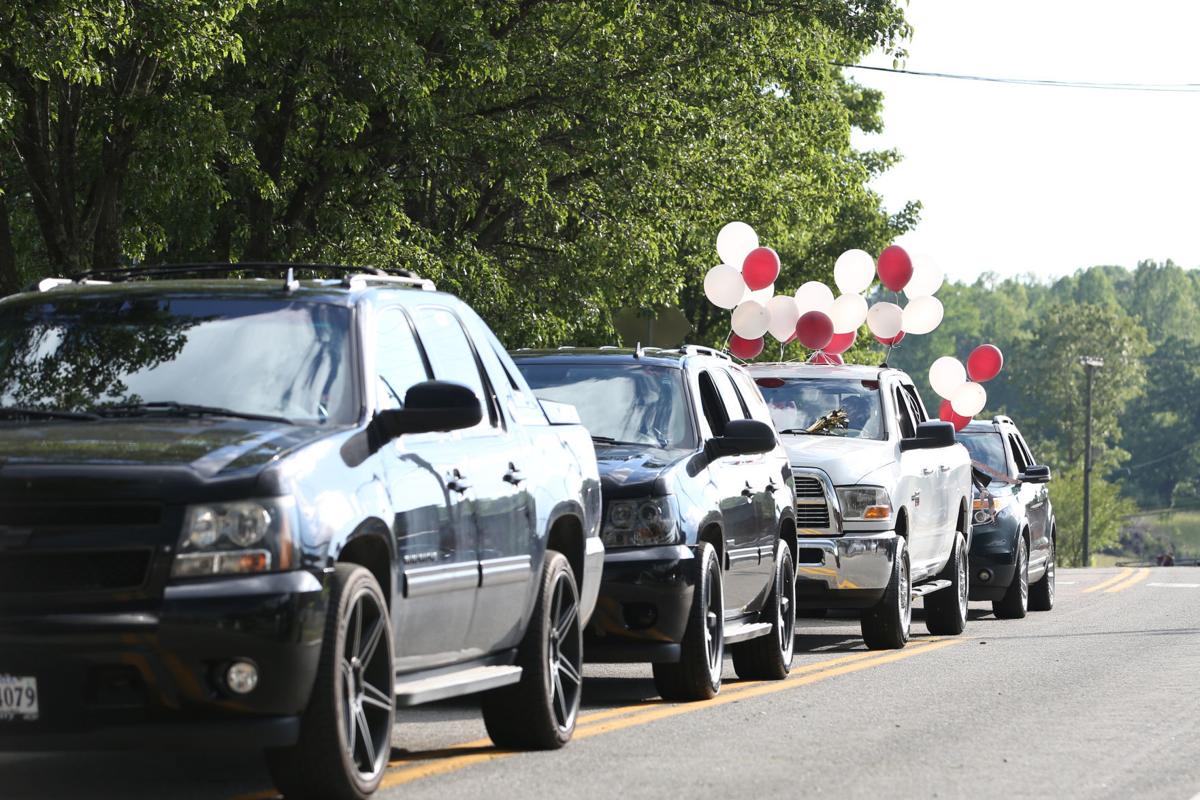 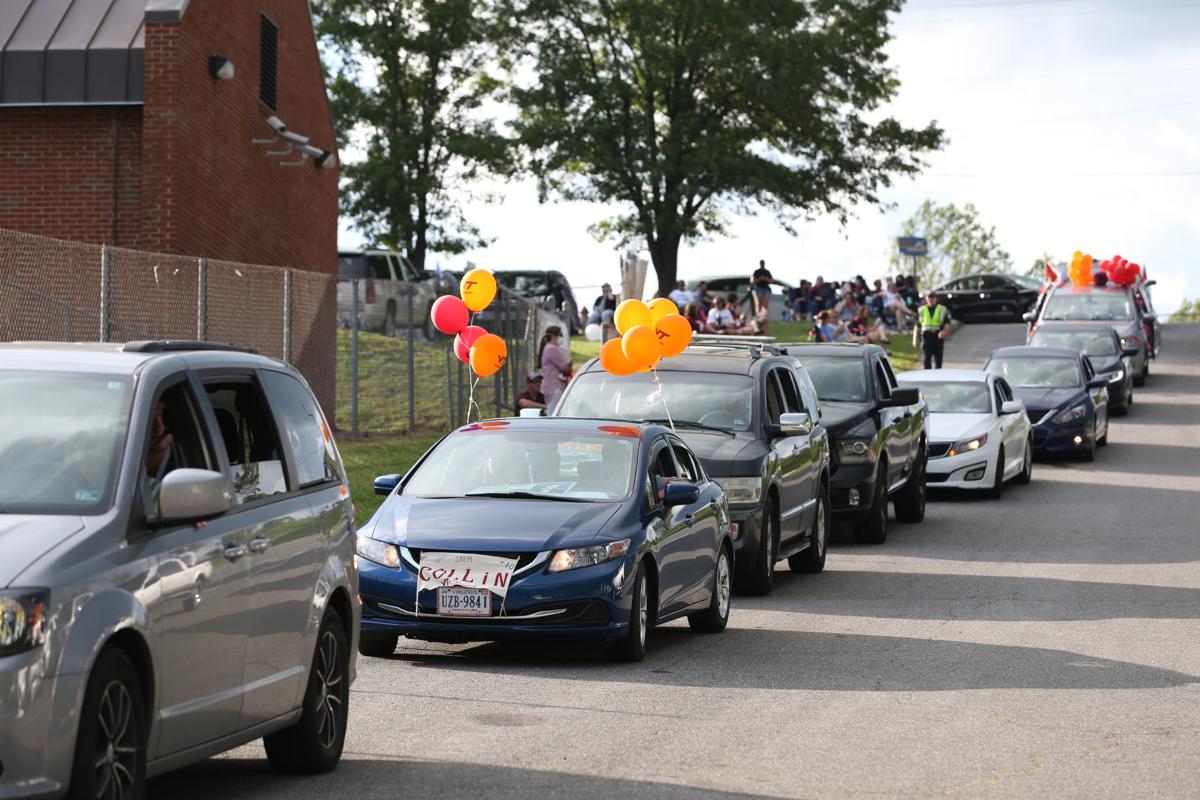 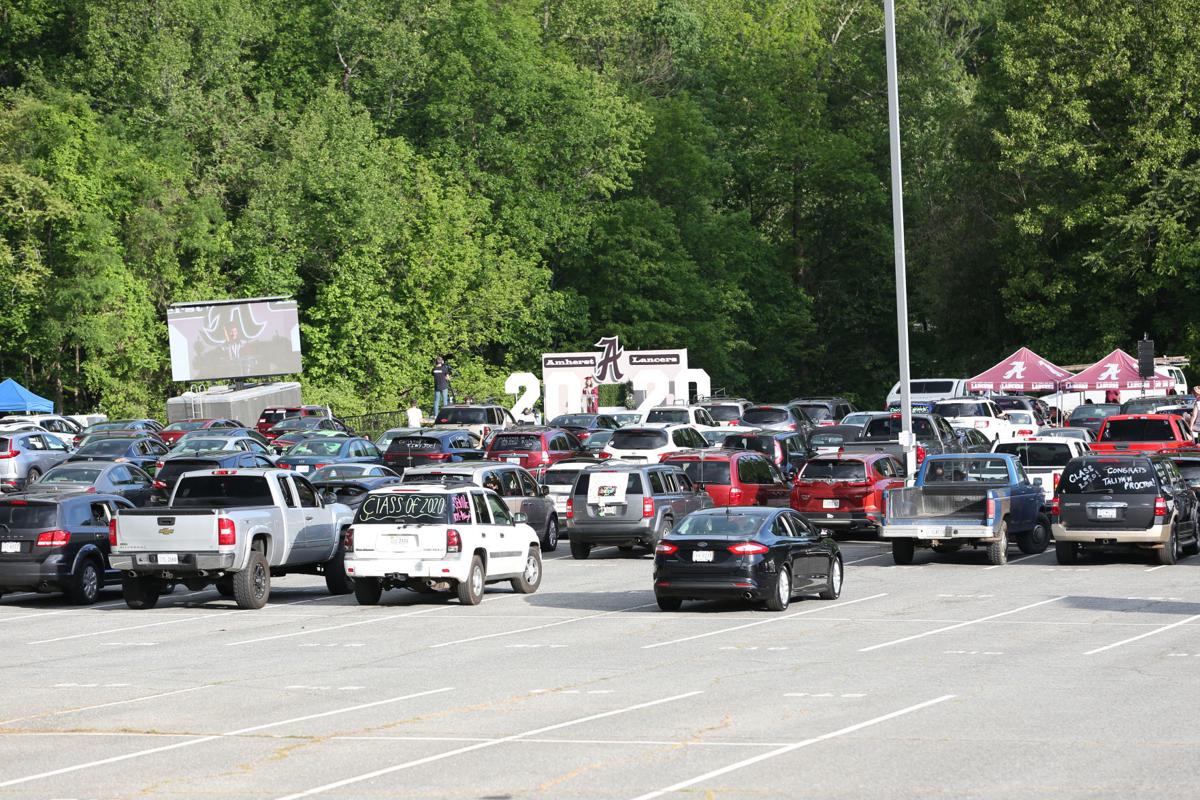 Savannah Tysver rides in the back seat of a pickup truck with her dog during the graduation ceremony at Amherst County High School.

Zarriah O’Bannon (in cap and gown) poses for a photo at Amherst County High School during a graduation ceremony Saturday. The “Commencement in Cars” ceremony marks the school’s 64th commencement.

AMHERST—Honking, cheers and applause filled Lancer Lane at Amherst County High School on Saturday evening as hundreds of people piled into their vehicles to pull off a challenging task of celebrating graduation while maintaining social distancing.

The “Commencement in Cars” ceremony marking the school’s 64th commencement was a unique event that allowed seniors to celebrate their milestone on the go in their vehicles, a measure brought on by restrictions on massive gatherings in the era of the COVID-19 pandemic. Principal Derrick Brown told graduates he viewed the event as an opportunity to show the school could rise above a major obstacle and forge memories they would carry the rest of their lives.

“We must face our obstacles and overcome them,” said Brown, a 2004 graduate of ACHS who is finishing his first year at the helm of his alma mater.

Cars were decorated with balloons, streamers, signs, “Class of 2020” regalia, college flags and congratulatory messages, while students and faculty wore masks with the school’s logo and gloves for further protection.

Teachers sat in fold-out chairs and families tailgated in the back of pickup trucks.

Students got out of their cars to walk across the stage and receive their diplomas, omitting handshakes and congratulatory hugs.

Graduating senior Savannah Tysver sat in the back seat of a pickup truck with a special guest who wouldn’t have been able to attend a traditional graduation ceremony: her dog.

“Thank you, Amherst County teachers,” Tysver said. “I’m very grateful for everything that you’ve done for us.”

During her years at ACHS, Tysver participated in show choir and played soccer and volleyball.

In his burgundy cap and gown, Mark Thurston cruised through graduation on the back of a red convertible adorned in balloons. “I’m graduating today and it’s an amazing day,” Thurston, a Ukraine native who moved to Amherst County several years ago with his adoptive family, said.

Thurston and Tysver both plan to attend Central Virginia Community College in the fall.

Senior Amani Hankton said despite social distancing restrictions she was excited to rejoin her classmates in celebrating more than two months after schools were closed because of the pandemic.

“I was just glad we were having something rather than not having anything,” Hankton said. “It’s like our last memory together.”

Senior Holland Saunders said the past few months have been difficult because her classmates were caught off guard by the school’s sudden closure; prior to Saturday’s event, they didn’t get to say their farewells.

“I think it’s a good opportunity to see each other and tell each other bye for the last time,” Saunders said.

After students received their diplomas and got back in their cars, they drove through the town of Amherst for a parade route.

Amherst County Schools Superintendent Rob Arnold said whether folks were watching from Main Street in Amherst or the comfort of their own homes — the ceremony was streamed online — they should be commended for helping the school system get through a trying time. Arnold told the graduates they are a resilient group and thanked school administrators who gave their time to help pull off a memorable occasion.

“All of the hard work that’s been done with this, our students are worth it. ... We worked to do everything we could to honor their accomplishments,” Arnold said.

The event also was a homecoming of sorts as the ceremony, which for more than a decade has been held at Liberty University, returned to the grounds of ACHS. The Amherst Show Choir also sang via a prerecorded video shown on the screen in the lower parking lot.

Zamire Andrews, senior class president, said his ACHS experiences have brought him the best memories of his life.

“Not only did we take over, we made a little history in the process,” Andrews said of the class’ many accomplishments. “… We’re all different, yet I see that drive in each of you. That drive has given this class a lot to be proud of.”

Valedictorian Summer Hensley, a cross-country runner, spoke of the endurance the class has shown in reaching the end of such a trying time and also honored her best friend, graduate Yesenia Hernandez, who suffered multiple injuries in a 2016 car wreck. Hensley also thanked teachers “who did not get paid enough to deal with us” and encouraged classmates to embrace struggles life brings.

“We must remember ‘hard is good,’” Hensley said.

Hensley and salutatorian Kennedy Campbell spoke of how the students and Amherst community overcame the April 2018 tornado that devastated the Elon community and left dozens of people without homes. Campbell, of Elon, shared how she was displaced by a fire that tore through her family’s residence prior to the school year. She also spoke of the graduating class being born into a post-9/11 society, growing up during the Great Recession and enduring lockdown during the coronavirus pandemic.

“Repeatedly, we have jumped many hurdles that attempted to hold us back from today, the greatest being COVID-19 that took from us so many exciting experiences we looked forward to,” Campbell said. “But we are still here. We have persevered through the storms of life.”