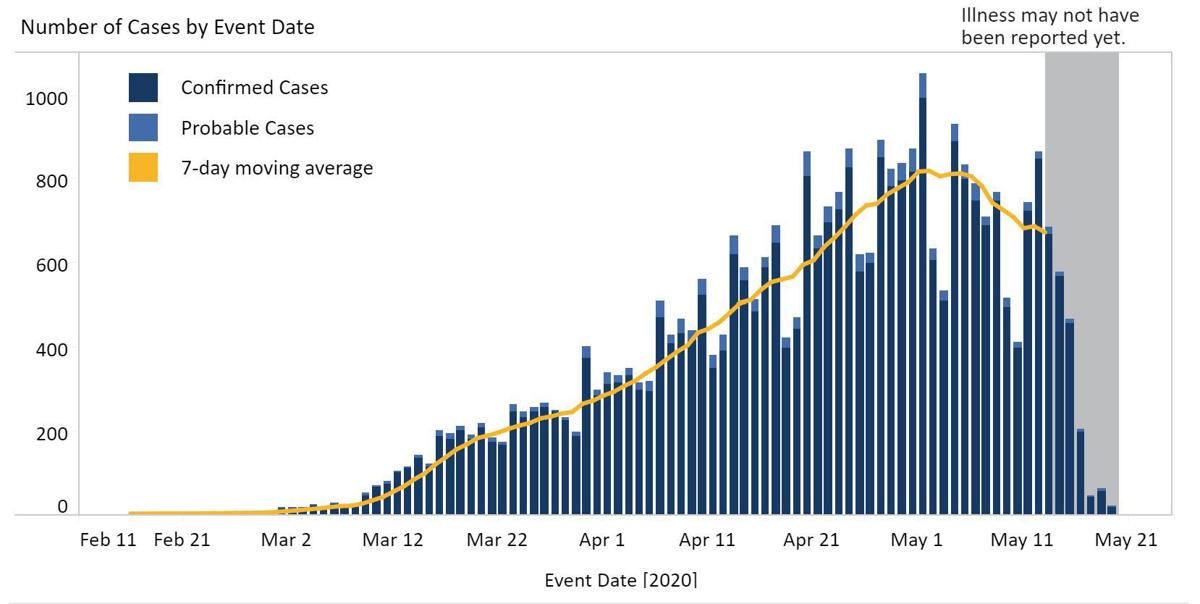 The Virginia Department of Health reported Wednesday that the state has 32,908 COVID-19 cases, an increase of 763 from the 32,145 reported Tuesday.

But as the case numbers climb, VDH figures show the 7-day moving average has been on a downward trend since the start of May.

The VDH defines probable COVID-19 cases as people who are symptomatic with a known exposure to COVID-19, but have not been confirmed with a positive test.

The state health department reported Wednesday there were 178 cases in the Central Virginia Health District: 75 in Lynchburg, 41 in Bedford County, 25 in Amherst County, 24 in Appomattox County and 13 in Campbell County. Nelson County, located in the Thomas Jefferson Health District, reported 13 cases. The numbers for those six localities were unchanged since Tuesday.

Fairfax County, the state's most populous locality with more than 1.1 million people, has the most cases with 8,163 and 302 deaths.

VDH said there are 311 outbreaks in the state, 184 in long-term care facilities. These facilities also account for 636 of the state's 1,074 deaths attributed to the virus.

State health officials have said there’s a lag in the reporting of statewide numbers on the VDH website. Figures on the website might not include cases or deaths reported by localities or local health districts.

Child with Virginia's first case of inflammatory disease is discharged

A child diagnosed with a rare inflammatory disease linked to COVID-19 has been discharged from the hospital and is recovering at home, the Virginia Department of Health said Tuesday afternoon.

The child was the first patient in Virginia to be diagnosed with what's called multisystem inflammatory syndrome in children, or MIS-C, a new illness found in children and teens weeks after contracting COVID-19. It can result in organ failure.

The case was diagnosed in Northern Virginia in the Fairfax Health District. It is the only MIS-C case reported in Virginia so far, as dozens of cases tally up around the country, particularly in New York City.

To protect the patient’s privacy, VDH declined to release further details about the case.

The illness can result in organ damage and failure, including to the heart.

“I urge all health care providers in Virginia to immediately report any patient who meets these criteria to the local health department by the most rapid means,” state Health Commissioner Norman Oliver said in a statement. “All Virginians should take steps to avoid exposure to COVID-19 by practicing social distancing, frequent hand washing and wearing cloth face coverings if appropriate.”

Cloth face coverings are not recommended for children under 2 years old.