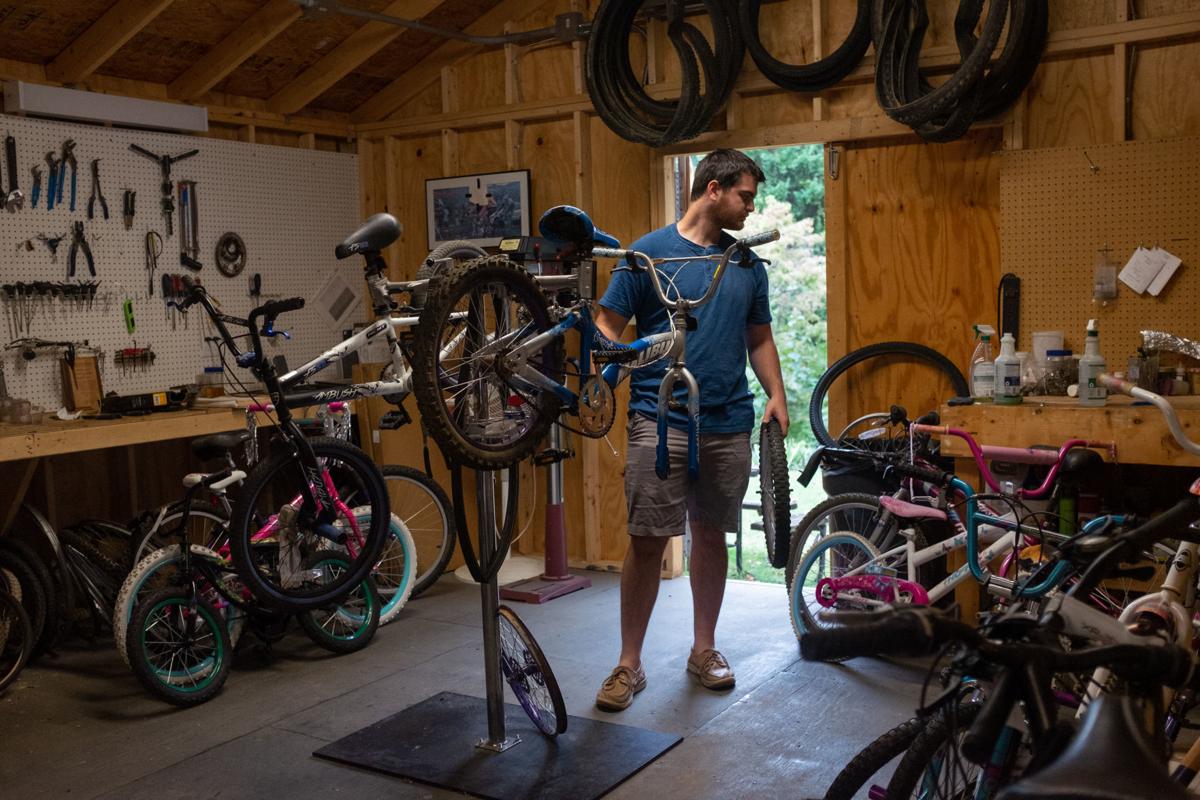 Economics senior Dylan Cook replaces a tire while renovating a donated bike on Tuesday, Oct. 8, 2019 in the Bike Shack at University of Lynchburg. 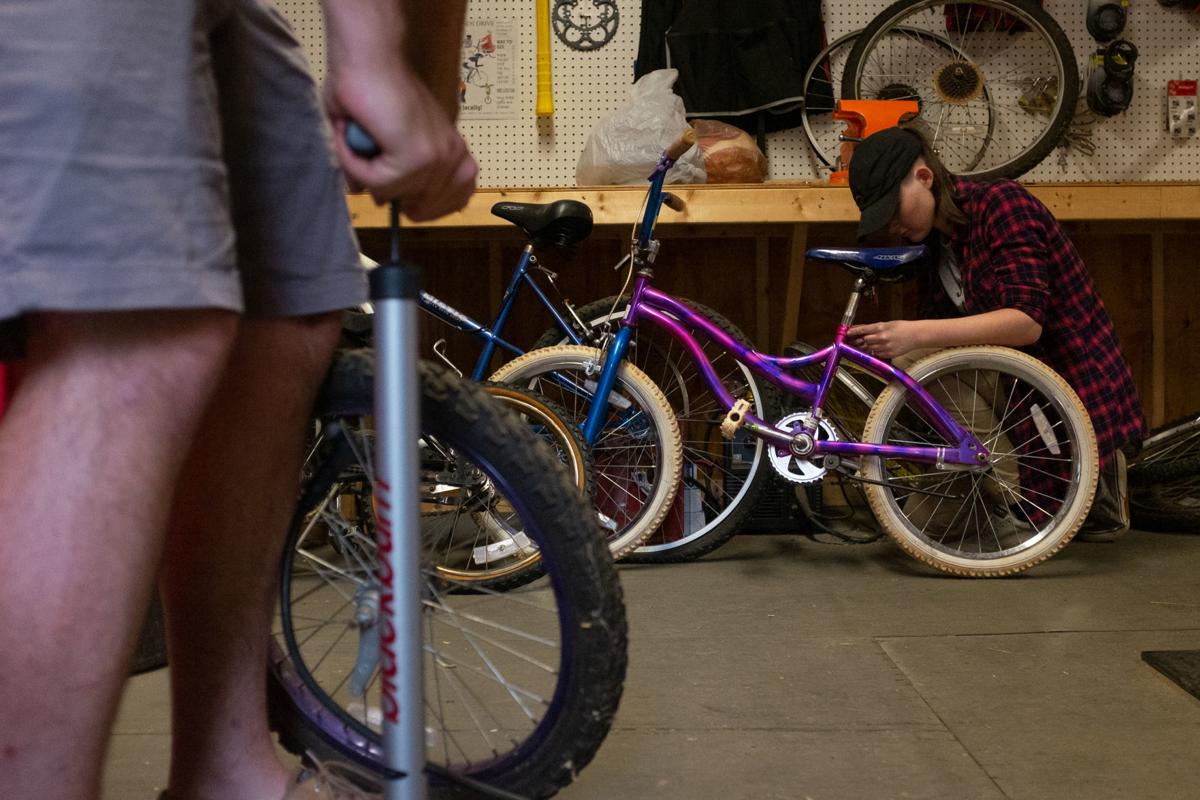 Criminology sophomore Mollie Hubble works on fixing a bike seat while economics senior Dylan Cook pumps air into a tire on Tuesday, Oct. 8, 2019 in the Bike Shack at University of Lynchburg. 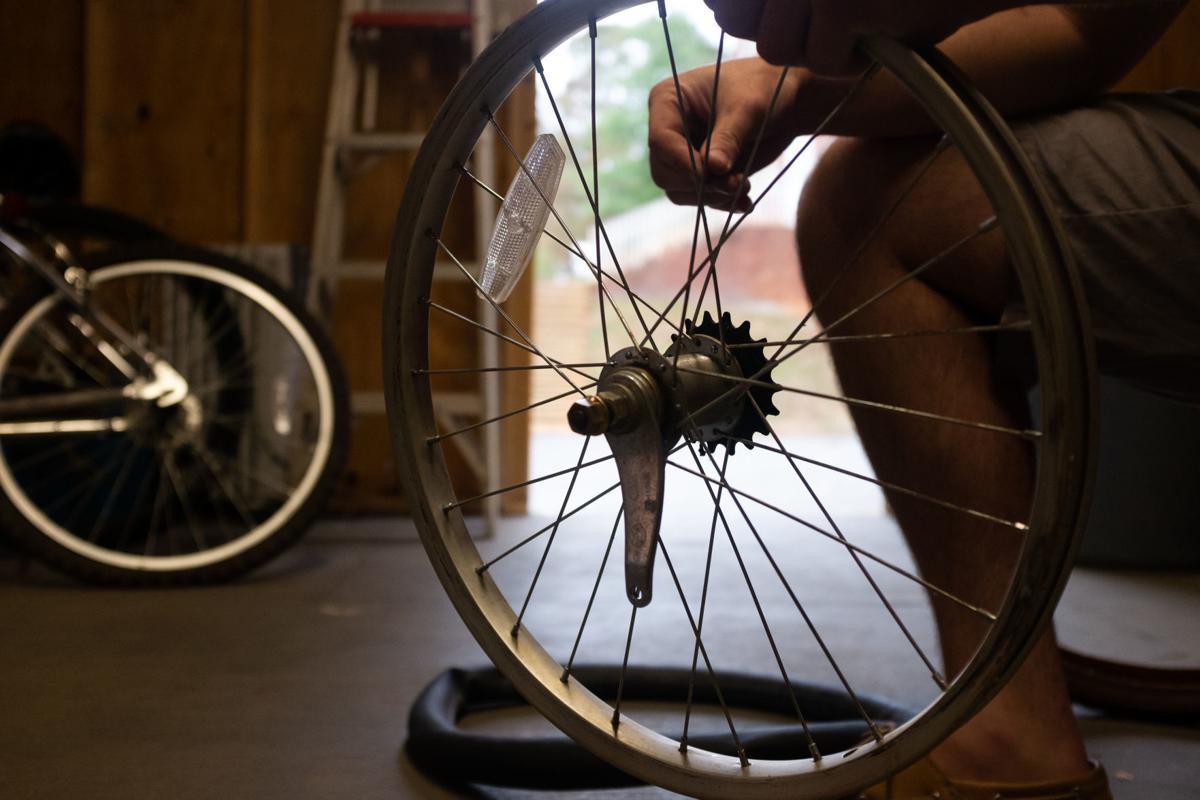 Economics senior Dylan Cook fixes a bike tire on Tuesday, Oct. 8, 2019 in the Bike Shack at University of Lynchburg. 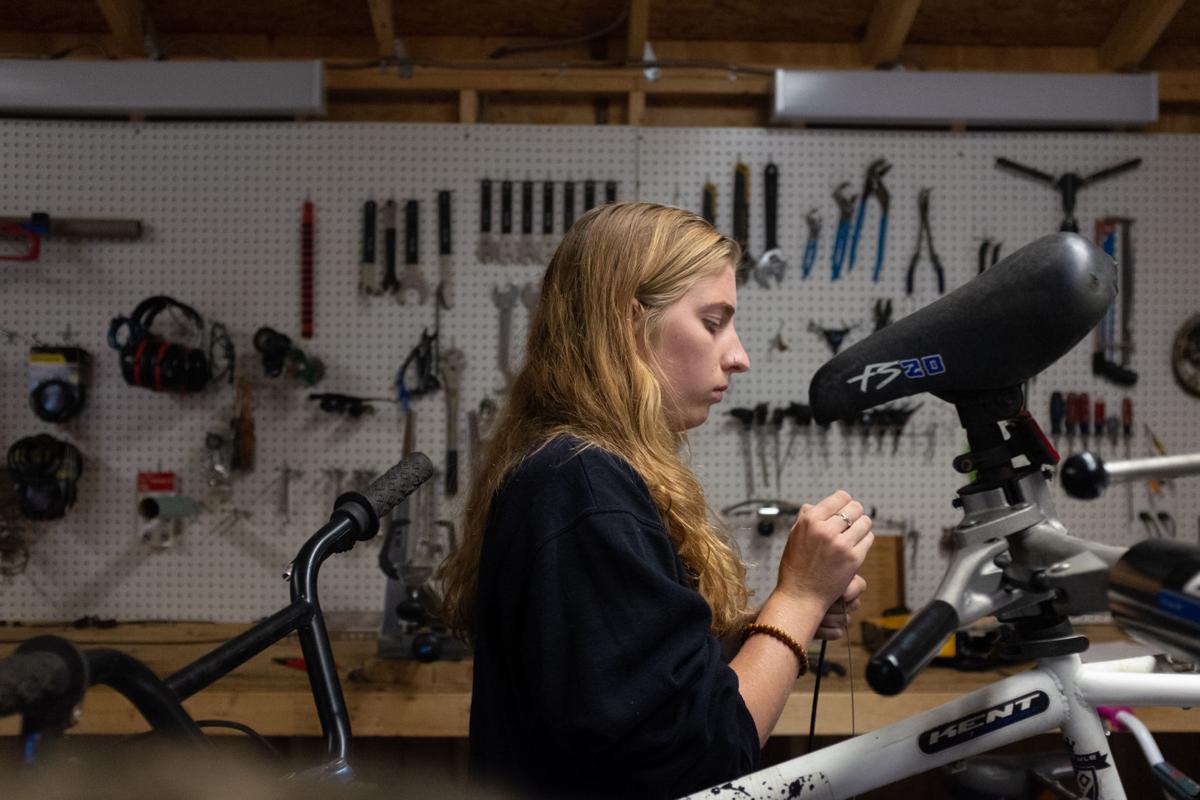 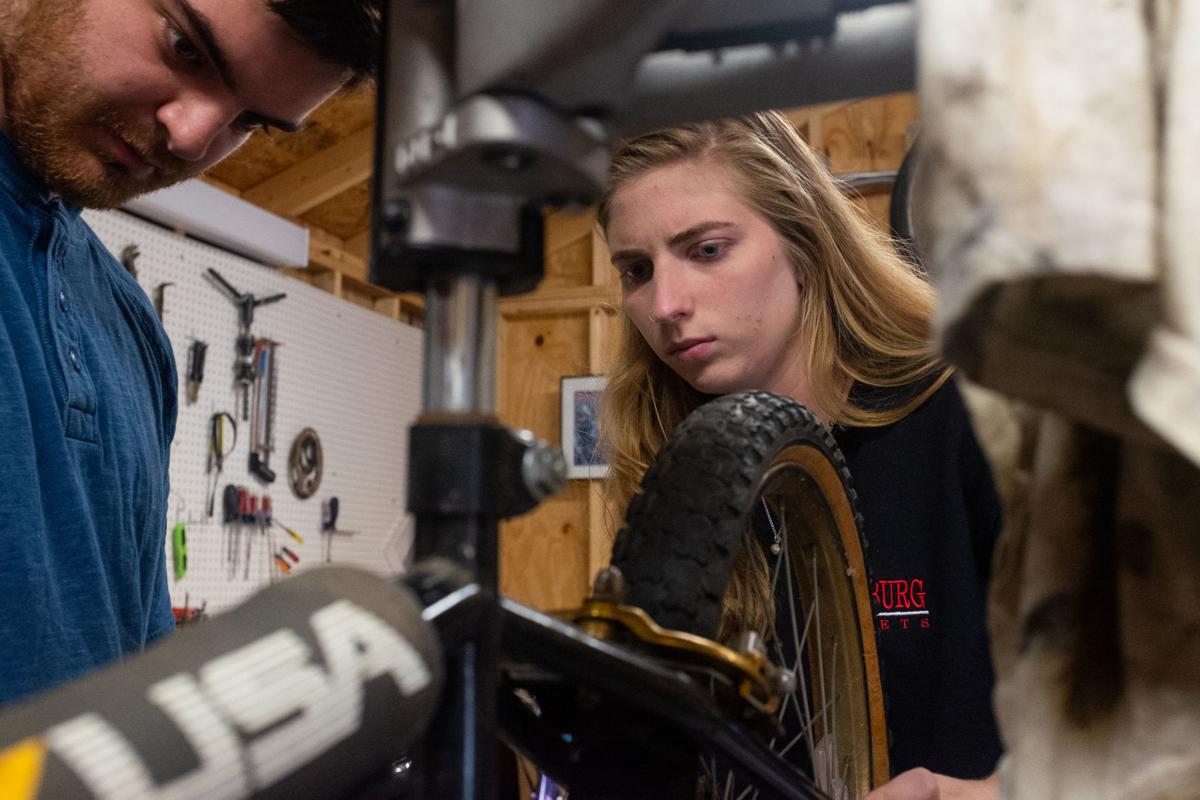 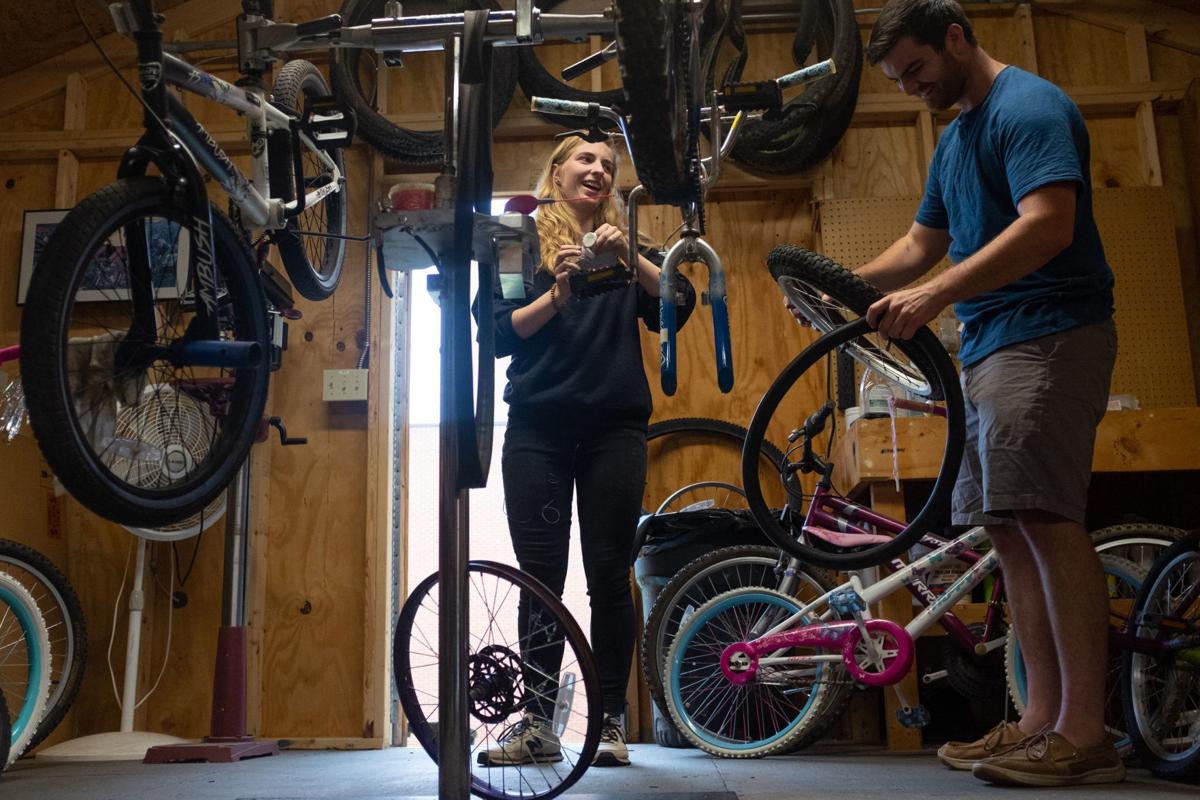 Economics senior Dylan Cook replaces a tire while renovating a donated bike on Tuesday, Oct. 8, 2019 in the Bike Shack at University of Lynchburg.

Criminology sophomore Mollie Hubble works on fixing a bike seat while economics senior Dylan Cook pumps air into a tire on Tuesday, Oct. 8, 2019 in the Bike Shack at University of Lynchburg.

Economics senior Dylan Cook fixes a bike tire on Tuesday, Oct. 8, 2019 in the Bike Shack at University of Lynchburg.

University of Lynchburg once again is partnering with two local nonprofits to give refurbished and second-hand bikes to children for Christmas.

Since 2013, the university’s Bike Shack has donated an average of 10 bikes a year to Jubilee Family Center and Miriam’s House, which place the bikes with children they serve.

The bikes may not be brand-new, but the students at the university work for months repairing and cleaning them until they sparkle.

“A lot of them are in really good shape,” Kevin Peterson, a professor of mathematics at the University of Lynchburg, said Tuesday. “Sometimes they’ve been in the backyard a long time and they’re harder to make them look nice.

“We want to make it look like it’s a new bike because we all remember getting that first bike.”

The donated bikes are held at the campus-based shack — a fully-equipped, no or low cost community bike repair shop — led by Peterson.

Peterson said the Bike Shack was the idea of a former student about eight years ago when he wanted to encourage students and the community to ride bikes more often to reduce their carbon footprints.

Eventually the bikes held at the shop needed repair, so the college has about three students who work at the shop and some faculty members who voluntarily assist.

“Our hope is people will come here and we will show them how to work on their bikes and they’ll be more comfortable with that,” he said.

This year the shack is open about nine hours per week and Peterson said it no longer is accepting donated bikes for the children this year as the shack is too full.

Throughout the year the shack was getting bikes donated that the students could ride, but also received some child-sized bikes. So the shack team decided to donate them to area youth in need with the help of Jubilee Family Center and Miriam’s House.

Sarah Quarantotto, executive director at Miriam’s House, said the nonprofit has been receiving bikes from UL since 2013 and gets three to five bikes annually.

Miriam’s House works to end homelessness in the area and Quarantotto said when many children lose their homes, they usually cannot take their bicycles with them and they end up scrapped or left on the side of the road.

The donated bikes that go to Miriam’s House are given to children who are spending their first Christmas back in their homes.

“For them to have a bike after they’ve lost everything is a really beautiful thing and restores their childhood to them,” she said.

In the past, some bikes also have been given to older kids, which Quarantotto said means freedom to access a community center or to spend time with friends.

“The program is a wonderful example about communities coming together and partnering to look after a child and knowing they need housing security but that also comes with having other aspects of their lives restored,” she said.

Sterling Wilder, executive director of Jubilee Family Center, said the program is important for the nonprofit serving at-risk youth because many families cannot afford to purchase bicycles for their children.

“Many parents are struggling to make ends meet,” he said. “So this program shows the kind of community we have. Jubilee only has four staff members so we are highly dependent on the support from area colleges.”

Wilder said the nonprofit offers a 3-Point-Play program that educates youth about nutrition and the benefits of daily exercise and the donated bikes fall into teaching those skills.

This year Peterson said he anticipates the university donating about 12 bikes around the third week of December.2.