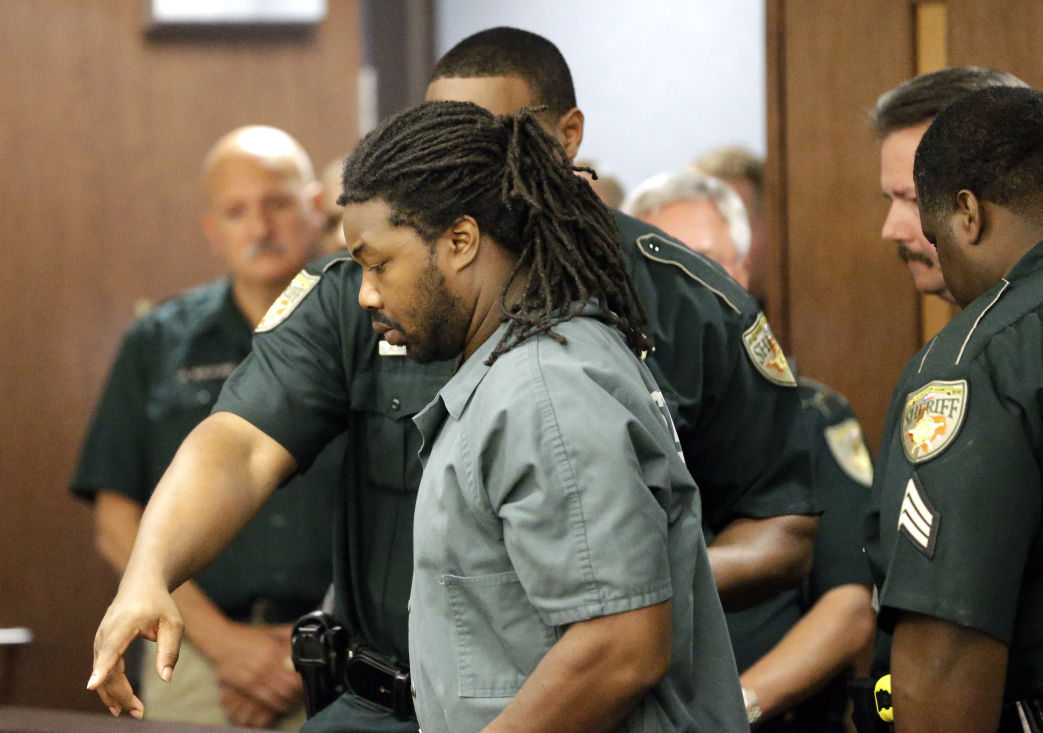 Jesse Leroy Matthew Jr. is escorted into a courtroom for an appearance before 405th District Court Judge Michelle Slaughter regarding his extradition back to Virginia, Thursday, Sept. 25, 2014, in Galveston, Texas. 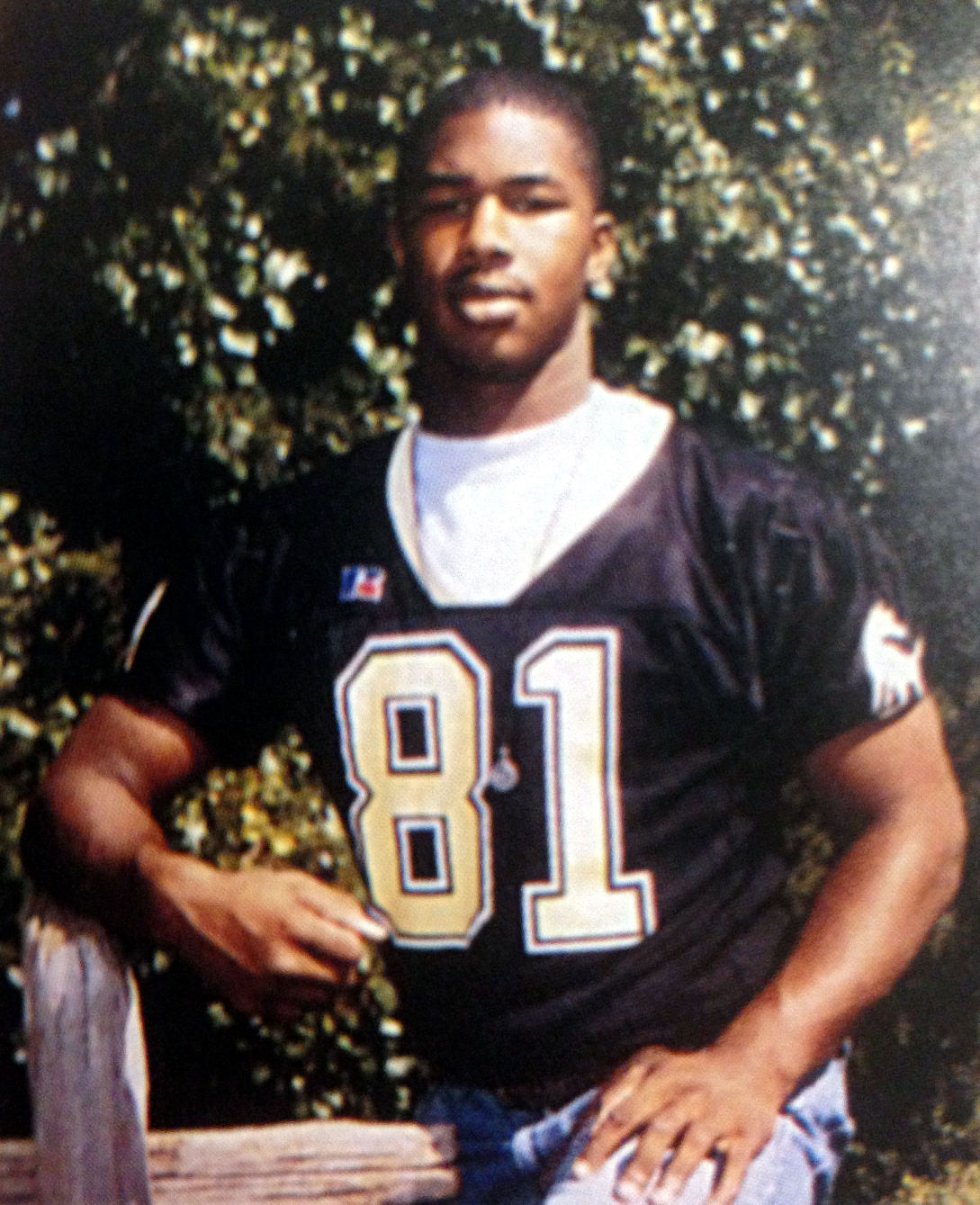 Jesse Leroy Matthew, Jr. is seen in a photo from the Monticello High School yearbook for the class of 2000

Jesse Leroy Matthew Jr. is escorted into a courtroom for an appearance before 405th District Court Judge Michelle Slaughter regarding his extradition back to Virginia, Thursday, Sept. 25, 2014, in Galveston, Texas.

Jesse Leroy Matthew, Jr. is seen in a photo from the Monticello High School yearbook for the class of 2000

A dozen years before a woman on a lonely Texas beach recognized him from his picture on television, Jesse Leroy Matthew Jr. was accused of raping a woman at Liberty University.

She chose not to move forward with the case, and prosecutors opted not to file charges. A defensive lineman on the football team, Matthew left the Lynchburg school months later.

That episode was all but forgotten by early Sept. 13, when, according to the owner of a popular Charlottesville night spot, Matthew was seen walking away from a downtown bar with an apparently intoxicated woman leaning on him for support.

She was Hannah Graham.

And she’s not been seen since.

As hope waned in the search for the University of Virginia second-year student, new details emerged about the case and the man charged with abducting her. In a Galveston County, Texas, courtroom, Matthew, 32, declined to fight extradition Thursday as authorities made their way there from Charlottesville to return him to his hometown, a place racked with fear and concern over the course of 11 days searching for Graham to no avail.

Authorities searched Matthew’s home and car Friday. He sped away from them Saturday as they followed him from his grandmother’s home and, after they charged with abduction with intent to defile, they finally caught up with him some 1,300 miles away, outside a tent pitched on a beach in Gilchrist, Texas.

As authorities combed the region for Matthew on Wednesday, a woman driving along the beach in Gilchrist noticed a man she recognized from television reports. He was camping outside a car. When a Galveston County sheriff’s deputy approached him, he said his name was George Carr. A check of the license plates turned up a match to the number listed in a wanted poster for Matthew.

Charlottesville investigators will fly back with Matthew in the next few days, said department spokesman Capt. Gary Pleasants.

Matthew’s lawyer, James “Jim” Camblos III, said he spoke with the former cab driver Wednesday night after his arrest in Texas. Both the attorney and Matthew’s family are “relieved that he is safe and returning to Virginia,” Camblos said.

The events marked a series of shocking turns for a man remembered as a football star and wrestling champion at Monticello High School. But shortly after graduating, Matthew ran into trouble.

“The issue was one of consent,” said Doucette, who did not handle the complaint, but reviewed the file after Matthew emerged as a suspect in the Graham case. “Basically, the woman was saying she hadn’t consented and Matthew was saying she had.”

Liberty University has confirmed Matthew was enrolled at the college between 2000 and 2002, playing on the football team for three seasons.

“It appears [Matthew] was cooperative with police and gave police a full-detailed statement,” Deputy Commonwealth’s Attorney Chuck Felmlee said. “Both parties appeared to give the same statement of what happened.”

Police did not find any forensic evidence or eyewitness accounts to support the alleged victim’s claims, he said.

According to online court records, Matthew was never charged.

Known to his friends as “L.J.,” Matthew worked in patient care at the University of Virginia Medical Center and volunteered to help coach football at the Covenant School. He’s been suspended from both positions.

News that Matthew had been charged came as a shock to Walt Davis, a pastor who played football with Matthew at Liberty and now lives in Crozet.

“It’s still kind of fresh for me,” Davis said Thursday. “I didn’t know him very well, but he was just a happy guy, who seemed to love life.”

Following the arrest on Wednesday of Jesse Leroy Matthew Jr., some community leaders are ask…

Learning that Matthew was found camping on the beach did not surprise Davis, he said.

“He had kind of a childlike nature,” Davis said. “Like Lennie from ‘Of Mice and Men,’ but not in a bad way.”

Charlottesville police Chief Timothy J. Longo said Thursday hope diminishes each day searchers fail to find Graham. Longo urged rural landowners to be watchful for any sign of her. He told reporters that investigators need help piecing together the gap between when Matthew last was seen with Graham early Sept. 13 and when her friend reported her missing the following day.

Graham and Matthew last were seen on surveillance video walking in the direction of the Tempo restaurant just after 1 on the morning Graham disappeared.

On Thursday, Brice Cunningham, the owner of Tempo, said none of his staff saw Graham inside the bar that morning, but she could be seen outside the doors after 1 a.m. while Matthew was inside. Receipts show Matthew paid for two beers during that time, he said. Cunningham said Matthew was seen by his staff walking away from the bar with his arm around Graham.

Matthew ordered drinks in Tempo before encountering Graham on the Downtown Mall, Cunningham said, though he wasn’t a regular customer. Cunningham said he noticed Matthew on the night of Graham’s disappearance because he wasn’t dressed in the attire typically worn by the upscale establishment’s patrons.

Longo said a witness saw Graham inside the bar with Matthew, but Cunningham said his staff neither served her nor saw her in the restaurant.

Longo said police have received more than 1,500 tips about the case. Police cannot search every inch of land, Longo said, and anyone who clears their land is encouraged to notify police so they can focus resources on unsearched areas.

“If you’re a [real estate agent] that serves the greater Charlottesville-Albemarle region — the nine surrounding counties — and you know that you are responsible for the sale of a piece of property or a building that’s vacant, we want to ask you to go that property and inspect it ... pick up that phone and call that tip line and let us know,” he said.

More than 1,200 volunteers combed the city last weekend for Graham, a member of the university’s Alpine Ski and Snowboard club team.

An iPod, unspent shotgun shell, 9 mm round, woman’s boot and scarf were among the items recovered over eight hours Saturday by Melissa McCoy, of Charlottesville, along with her son and a search team.

Matthew pulled up next to the women about 10 p.m. and asked whether they wanted to hang out, McCoy said, but the friend told him they had somewhere to be.

“We never let her go out,” McCoy said. “It’s scary. It’s just the luck of the draw. We’ll never know how close it was to being something else.”

Efforts to reach Matthew’s family Thursday were unsuccessful. A man who answered the door at his father’s home said Jesse Leroy Matthew Sr. was too upset to eat and spent the night alone in his room.

He was “The Proudest Mustang” at Monticello High School, the co-captain of the football team…

Crews combing rural Albemarle County on Sunday in the search for Hannah Graham turned up nothing but remained determined to press on, officials said.

'No indication' of Matthew link to Newport News case, but investigation continues

A police spokesman said there is "no indication" that the man suspected in the abduction of University of Virginia student Hannah Graham is connected to the disappearance of a Newport News woman, but added the case is being reviewed by a special victims unit.

The bond hearing scheduled Thursday for Jesse Leroy Matthew Jr. on a charge he abducted Hannah Graham has been canceled, his attorney said today.

As crews today followed tips in their search for Hannah Graham, authorities in Orange and Newport News said they were reviewing the cases of t…