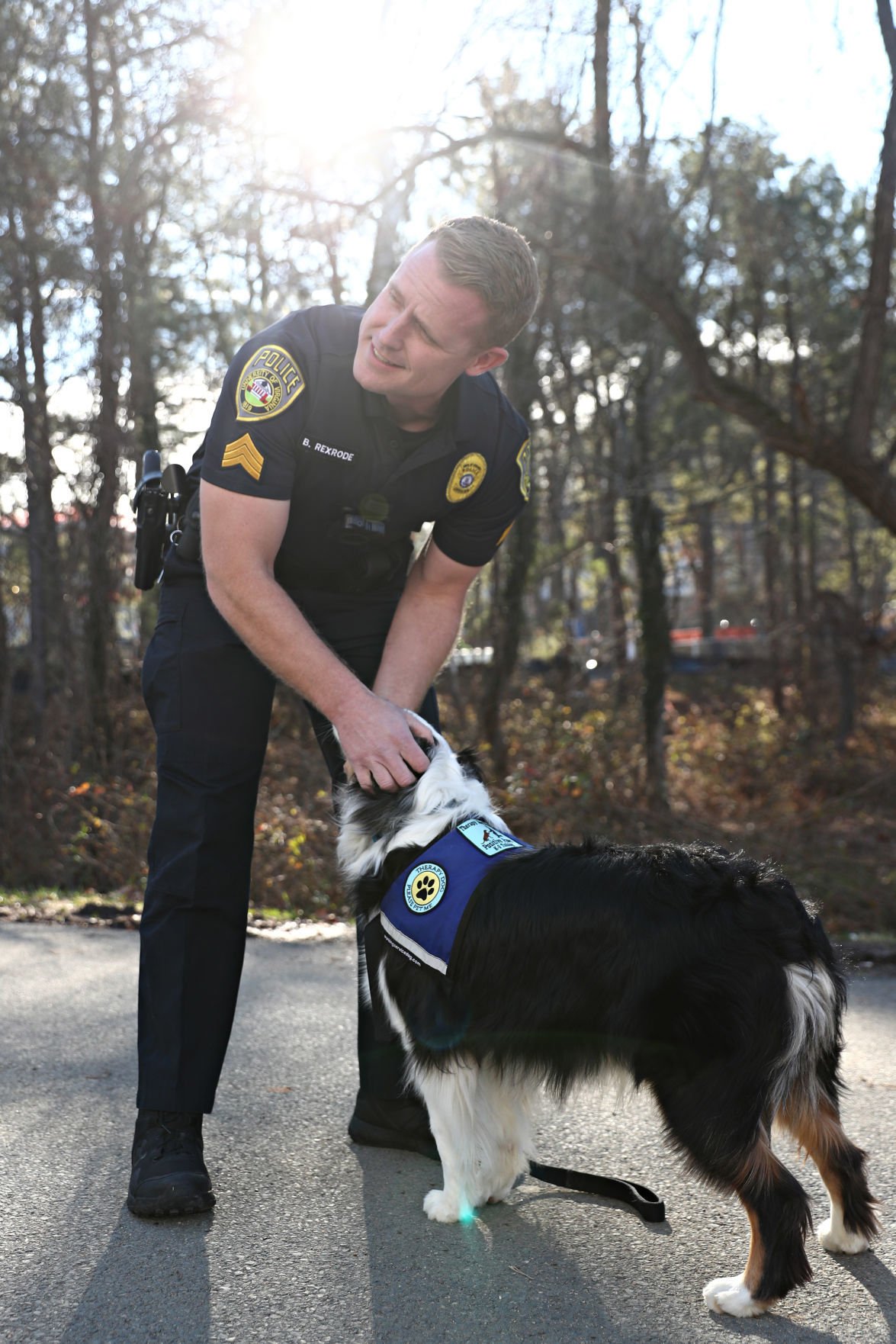 Cooper and Sgt. Ben Rexrode, of the University of Virginia Police Department, went through a therapy dog training program together. 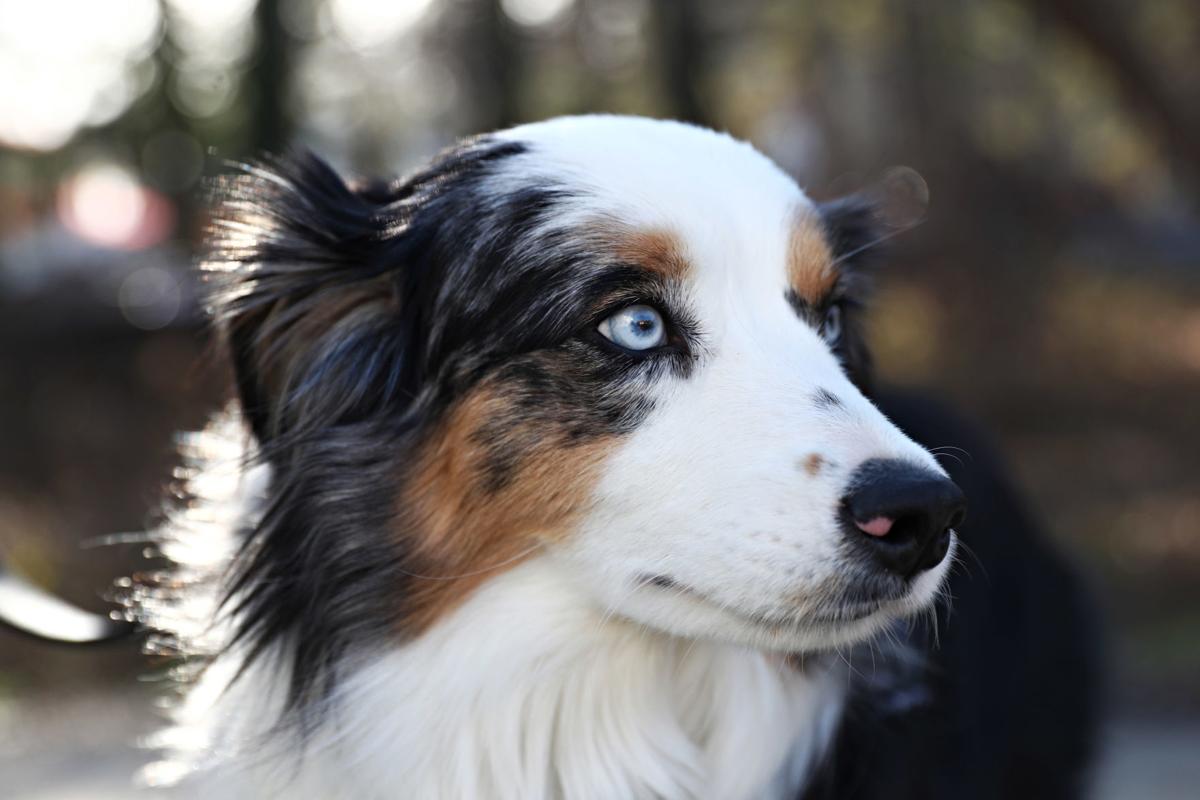 Cooper and Sgt. Ben Rexrode, of the University of Virginia Police Department, went through a therapy dog training program together.

One look into the startling blue eyes of Officer Cooper Rexrode evokes a sense of calm, as well as an odd desire to rub his belly, stroke his ears and coo baby talk into his earnest face.

It’s OK. The newest addition to the University of Virginia Police Department is not only used to it, it’s his job.

“He’s always down for a belly rub,” said Cooper’s human partner, Sgt. Ben Rexrode. “His job is to help people relax and ease stressful situations. He’s very good at it, whether it’s in the office or on the street. He seems to know when he needs to be calm. At home, he can get wound up playing with my kids and chasing squirrels. He’s definitely a squirrel chaser.”

Cooper is a miniature American shepherd trained in the ways of canine therapy. Snuggling, nose-nudging and standing by while anxious, stressed and distressed humans stroke his long, silky fur are among the skills he honed during months of therapy dog training at Positive Paws, a Stuarts Draft organization.

Cooper and his sergeant went through the program together.

“I didn’t really know what I was doing,” Rexrode admitted. “He was smarter than me and could figure it out easily. He knew what he was supposed to do. I just had to learn how to get him to do it.”

The department also utilizes Cooper as a public relations officer.

“A therapy dog is a conversation starter,” Rexrode said. “He attracts a lot of positive attention, presents a soft image for the department and makes officers more accessible.”

For Cooper, the training helped him to develop his natural dog talents to soothe savaged human hearts. Those talents have been proven in dozens of studies at universities around the world, including Johns Hopkins and the University of California at Los Angeles.

“The simple act of petting animals releases an automatic relaxation response,” officials with UCLA Health’s Animal-Assisted Therapy Center said. “Humans interacting with animals have found that petting the animal promoted the release of serotonin, prolactin and oxytocin, all hormones that can play a part in elevating moods.”

The American Kennel Club, which also has recognized therapy dog training, notes therapy dogs are not the same as service dogs.

“Service dogs are dogs that are specially trained to perform specific tasks to help a person who has a disability,” the club notes. “Therapy dogs are dogs that go with their owners to volunteer in settings such as schools, hospitals and nursing homes. From working with a child who is learning to read to visiting a senior in assisted living, therapy dogs and their owners work together as a team to improve the lives of other people.”

Unlike a K-9 unit, Cooper is not a full-fledged officer. He’s more of an auxiliary officer, a volunteer who assists the department. Unlike bomb-sniffing dogs or protection dogs at other departments, the UPD does not own him. He belongs to Rexrode and family.

Working as the department’s community policing and victim’s assistance officer, Rexrode said he saw the value of a therapy dog.

“Having a therapy dog is something my wife and I wanted to get into and get our kids into as a way to help others,” Rexrode said. “She works for a school system and was thinking about ways to use a therapy dog in her work, and I thought it would be great for the police department.”

Rexrode approached the university police management about the idea of a therapy dog that he would own and train and for which he’d be responsible. The administration loved the idea.

“We figured out all of the legal stuff, including liability, and as soon as he passed the training, he started coming to the office,” Rexrode said.

UVa Interim Police Chief Timothy J. Longo said he is in favor of Cooper working with the department.

“It is important to note that Ben has made a personal contribution of his time, energy and financial resources in acquiring Cooper and ensuring the proper training and subsequent certification required of service animals,” Longo said. “I deeply appreciate his generosity and look forward to working with him and Cooper as they go about their good work.”

Although Cooper has only been on the job a few months, he proved effective during a recent trip to the area’s Emergency Communications Center to visit dispatchers.

“When he came in, he sat right down next to me and I was petting his head,” recalled Kate Webster, who was working a dispatch console and taking 911 calls when Cooper came into the center. “When I stopped, he nudged my hand to keep me going. It was a minute of relaxation and comfort during a busy day.”

A previous center director had a therapy dog who often visited dispatchers. Those visits, staffers said, were met with eager anticipation.

“You know, they come right up to you and they just make you feel better. For a moment, you relax, you feel calm and it makes you happy,” said Jan Farruggio, a veteran dispatcher. “It really helps you refocus.”

“We’re always asking the K-9 officers to bring their dogs up to see us and we look forward to it,” said Rick Johnson, another veteran dispatcher. “Those are working dogs, so it’s a bit different. Having a therapy dog nearby, a dog whose job it is to be petted and to be affectionate, is something we really appreciate. It just makes you feel better.”

Sonny Saxton, the dispatch center’s director, said the response to Cooper was so positive that the department’s leadership committee took notice.

“There was a lot of interest,” he said. “It’s amazing what a visit for a couple of minutes a day can do to boost morale and relieve stress.”

“A therapy dog helps open communications between us and people who are reluctant to approach police. They can ease people through the stress of talking with officers, reporting crimes and traumatic events and even going to court,” he said.

Rexrode said his family would have put Cooper into training even if the department had decided against a therapy dog.

“It’s great having him here and seeing how he affects people that meet him,” Rexrode said. “Of course, for me, the best perk is I get to take him to work with me and then take him home.”