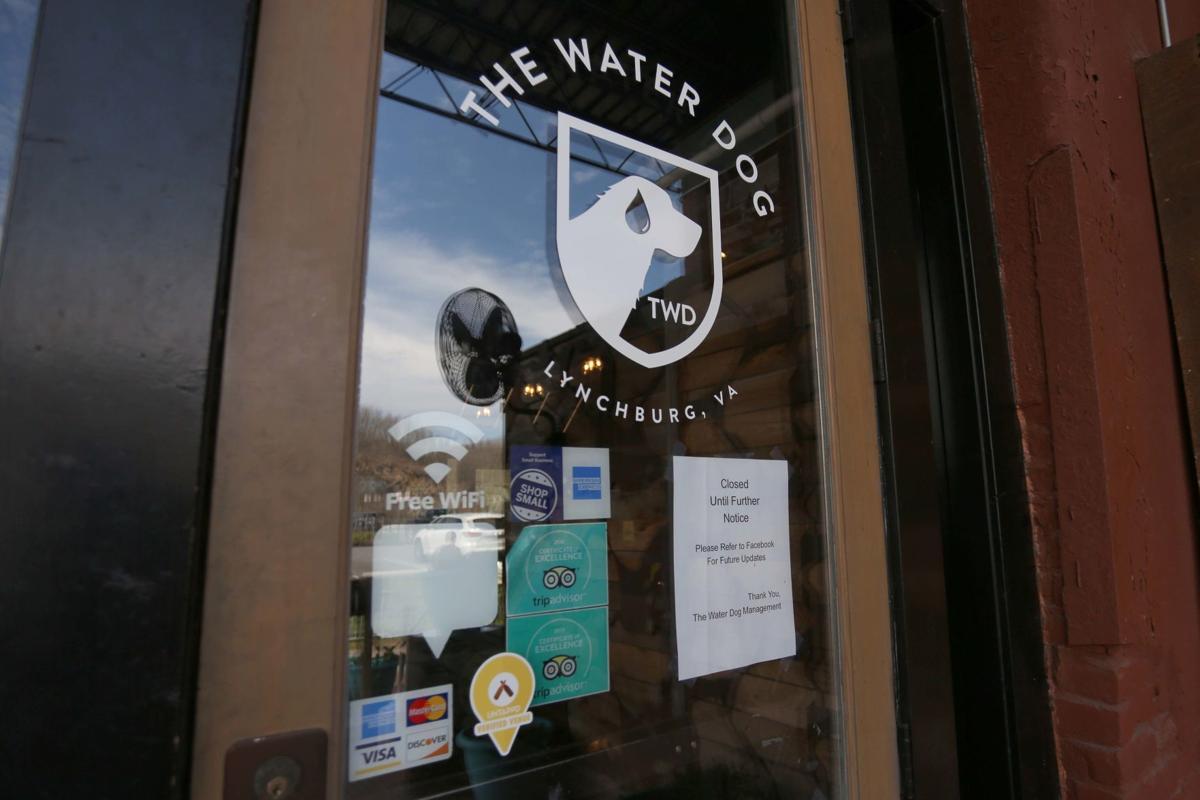 A closed sign is taped on the door of The Water Dog in Lynchburg on Thursday, March 19, 2020. 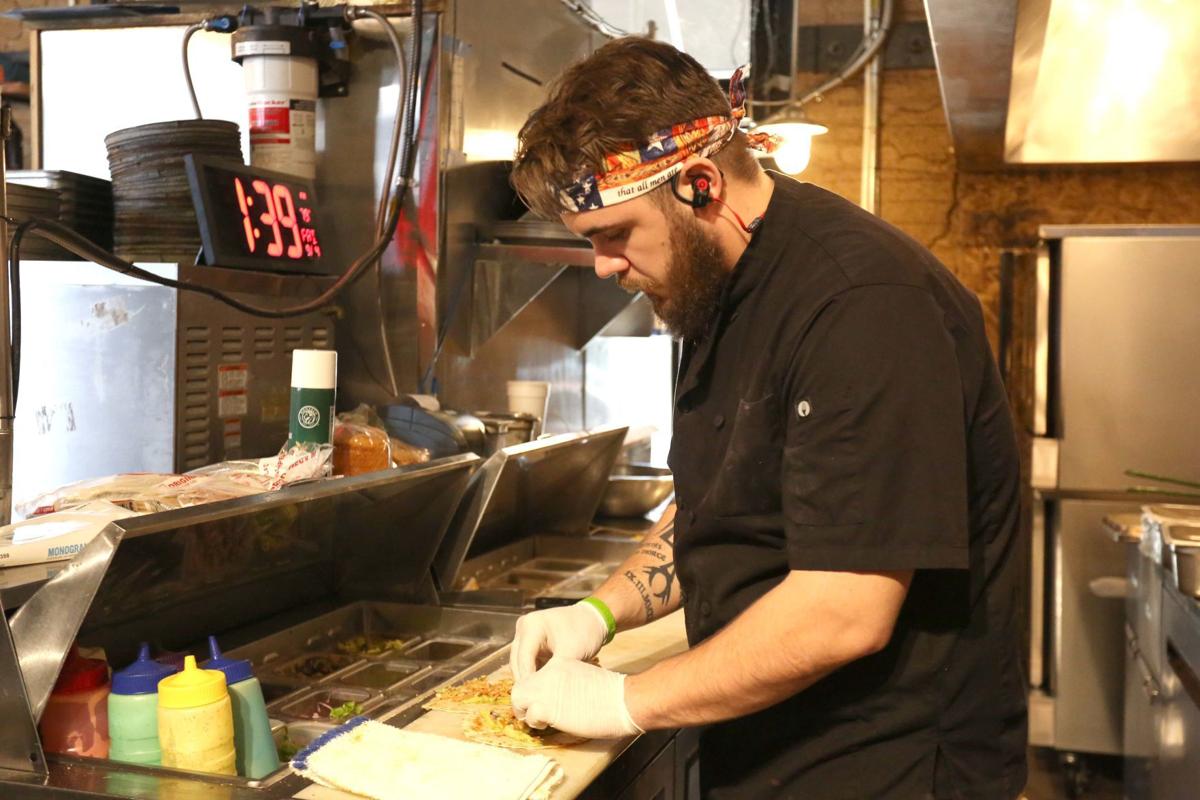 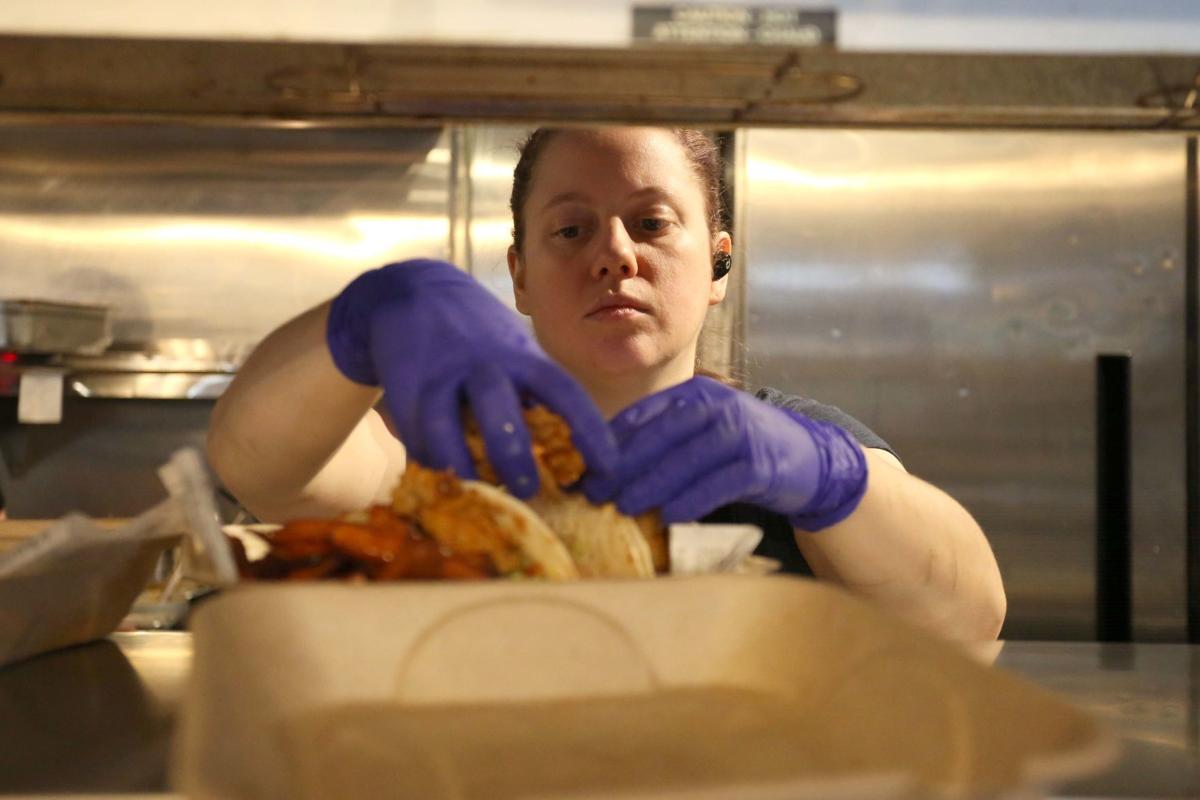 Prep cook Marijah Klug boxes up an order at The Water Dog in Lynchburg on Thursday, March 19, 2020.

A closed sign is taped on the door of The Water Dog in Lynchburg on Thursday, March 19, 2020.

Prep cook Marijah Klug boxes up an order at The Water Dog in Lynchburg on Thursday, March 19, 2020.

The inside of popular downtown restaurant and bar, The Water Dog, is but a shell of its former self.

The establishment usually is bustling with diners who come for its patio scene and live music this time of year. This week, it sits empty.

In the back of the house, however, cooks and waiters bustle around filling online orders to deliver to their loyal patrons at the curb of its location at 1016 Jefferson St.

Even though it’s offering its full menu and a full array of draft beers to go, owner Dave Henderson said, amid the COVID-19 pandemic sweeping the nation, restaurants still are trying to find ways to engage with the community.

“That’s the thing we miss the most. Our friends and family who used to be here every day,” he said. “We’re trying to think of new, fun and engaging ways to connect.”

One idea includes a virtual happy hour where customers could join in online via live stream and enjoy a beer together.

Henderson, who also owns The Glass House across the street, said artists are also struggling and hope to potentially live stream shows from the music venue.

“People need music to keep their spirits up,” he said. “These are all ideas right now. We’re trying to make sense of it all.”

On Tuesday, Henderson brought together 20 other business owners to create the Lynchburg Restaurant Owners Coalition to show support for one another, share best practices and tips on how to get through the virus and help staff who have been laid off as a result.

“They’re scared and didn’t know what to do. Navigating this alone is scary. We need to come together and work with the city to provide creative solutions to allow businesses to see through this crisis and make it through the other side,” he said.

All businesses are at risk without local, state and national support, he said.

“We don’t know when we’ll see the peak of this or the downturn of this. We don’t know what the new normal will look like, but we’re doing this to try and keep a few people on payroll so they can feed their families.”

Alex Richardson, owner of RA Bistro at 1344 Main St., is keeping the doors open but has taken away all chairs at its bar and is only seating a limited amount of customers who are strategically placed away from each other in the 4,000-square-foot building.

“I want to remain open as long as I can and serve in whatever capacity I can, while still being socially conscious of not transmitting the virus and that’s the part that is a fine line to walk,” he said.

The restaurant is focusing only on serving food to customers at peak hours — lunch and dinner — and not serving a drinking bar crowd.

People still are working downtown and they will continue to need lunch to eat, he said, and he is hoping to do his part by changing his menu to offer boxed lunches and is working on creating fixed price “family style” meals for customers to order and take home to feed their families.

“We’re trying to be a part of the solution and I’m looking at it as food consumption,” he said. “This isn’t a snowstorm where we close and hope it melts off, there’s an aftermath. We will still have to do sanitation and do social distancing; this will be a standard practice and a change of environment. There will be a shift of food preparation, delivery and execution, all that is being changed.”

He said making the decision to stay open or close is for each individual restaurant to make, he said.

“It’s hurting us across the board no matter what we do, each and every restaurant has to make the call themselves and there’s no blanket answer, if they can provide adequate service in such a way to where it’s not going to promote the spread of the virus that’s what we have to do,” he said. “We have to be socially responsible.”

Jason Arbusto, culinary director at Waterstone Pizza at 1309 Jefferson St., said he is monitoring the situation day to day and hour by hour.

“We want to keep the community and our employees safe,” he said.

The restaurant is closed for dining in but is serving customers with the ever-popular tactic of curbside pickup that many restaurants have adopted this week.

He said customers can continue to support local restaurants by purchasing gift certificates and using them at a later date.

He said the restaurant is using every precaution imaginable, including using more gloves, doing more cleaning and staying in contact with health officials.

Chick-fil-A Inc. released an official statement Sunday night stating all Chick-fil-A’s would be closing their dining rooms no later than close of business March 20.

In Lynchburg, Chick-fil-A on Wards Road made the decision to shut down its dining room as of Tuesday.

“As of Friday last week, we removed all of our condiments off of the stands and stopped the use of table markers and trays to limit contact as much as possible,” she said. “We also stopped offering refills in the same cup. Now we have begun offering curbside service with the mobile ordering through our Chick-fil-A app as well as continuing to offer Doordash with curbside service through their app, respectively.”

Chick-fil-A now is running three lanes of drive-through with additional staffing outside to help expedite the process.

The Alliance has compiled a list of restaurant members throughout the region who are offering take out.

“This is a very crucial time during this unprecedented event — which is why our local businesses, especially our restaurants, need us now more than ever,” a post on the Alliance’s website states.

The city of Lynchburg is loosening certain policies for residents and businesses in light of the COVID-19 pandemic.

Randolph College announced Thursday its May 17 commencement ceremony will be postponed, following the guidance against large gatherings amid t…