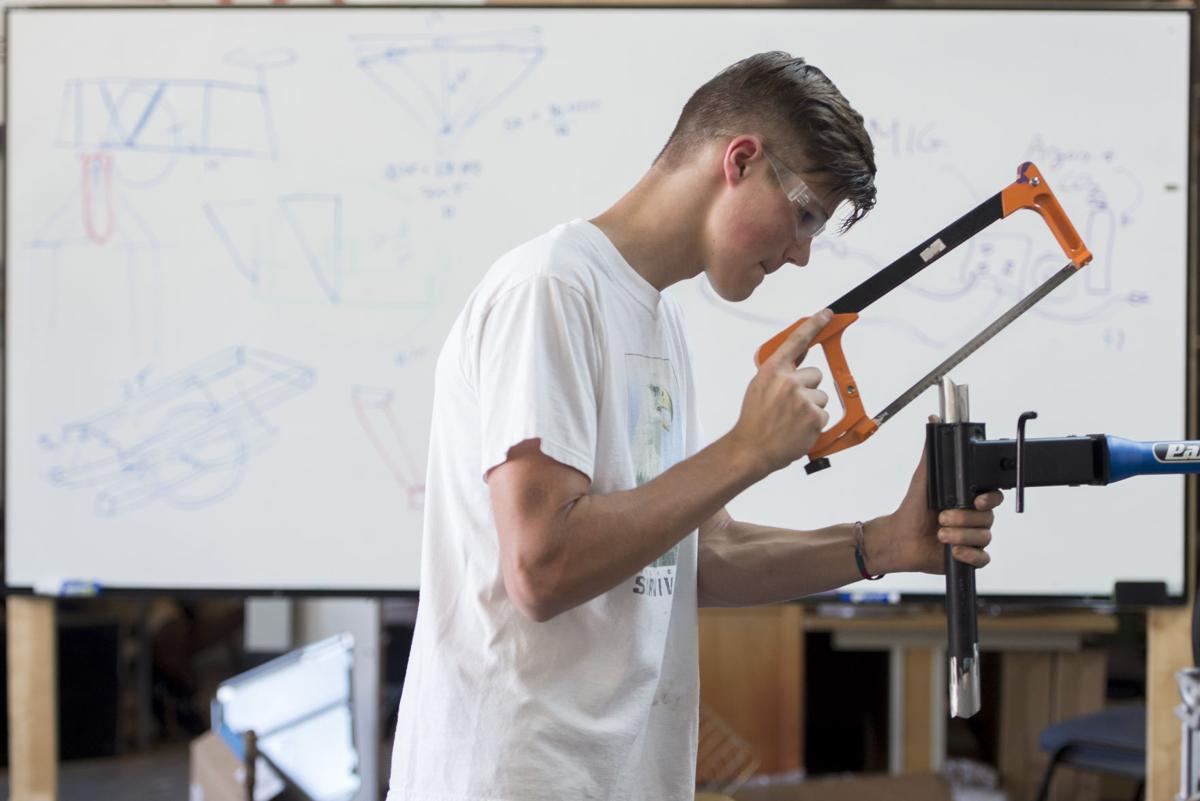 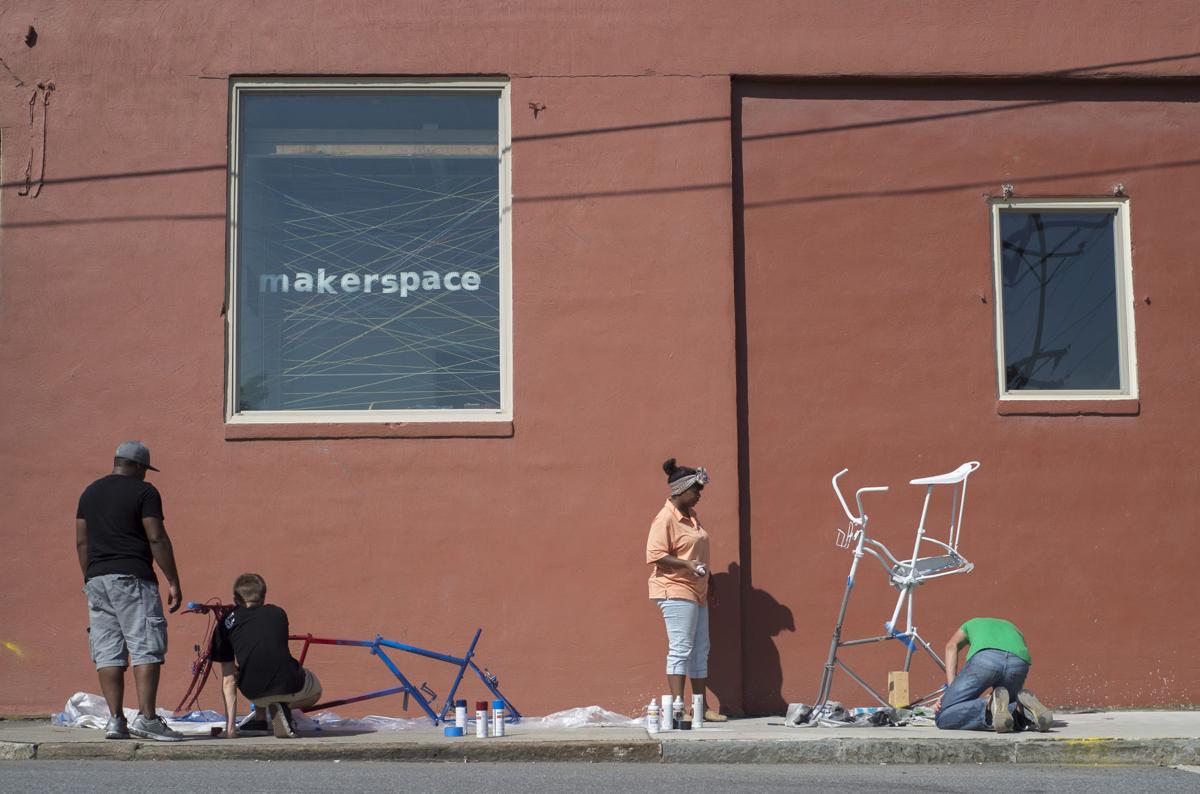 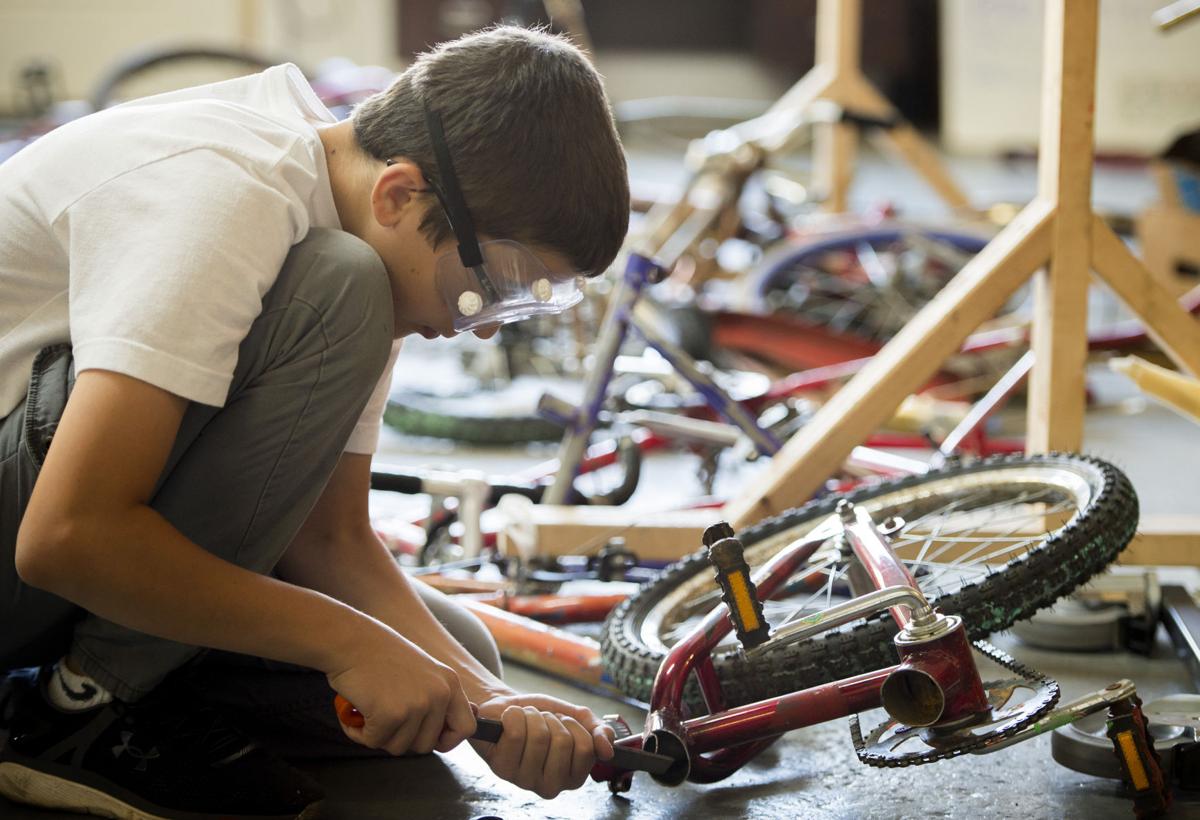 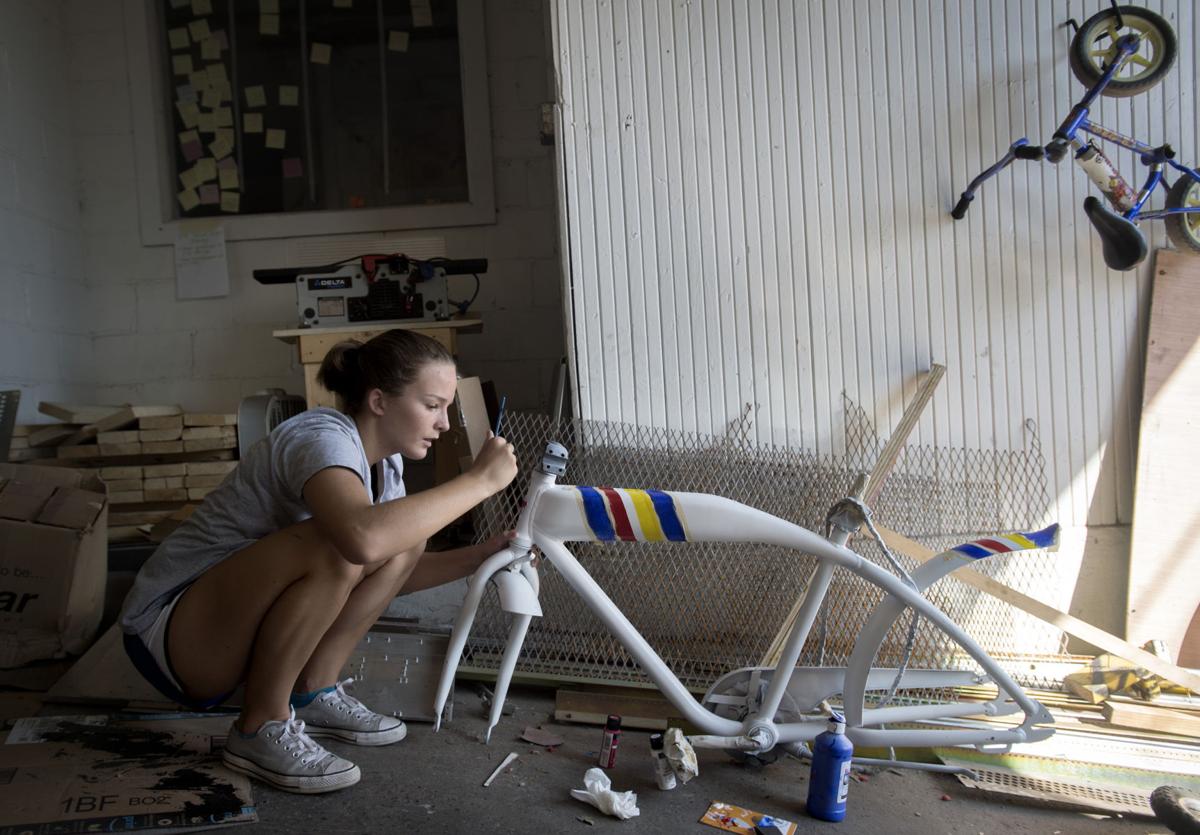 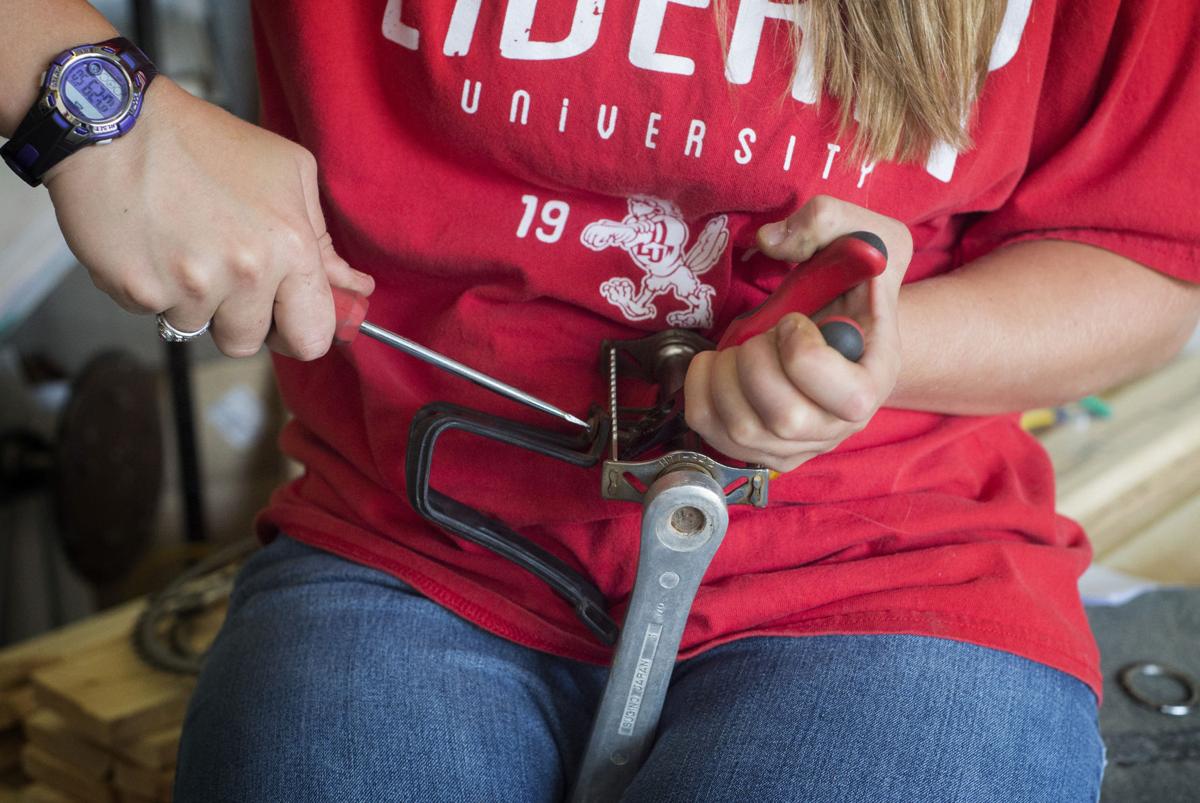 Lovelee Warner works on the pedals to her chopper bike during Vector Space's Hill City Bike Project in Lynchburg, Va. 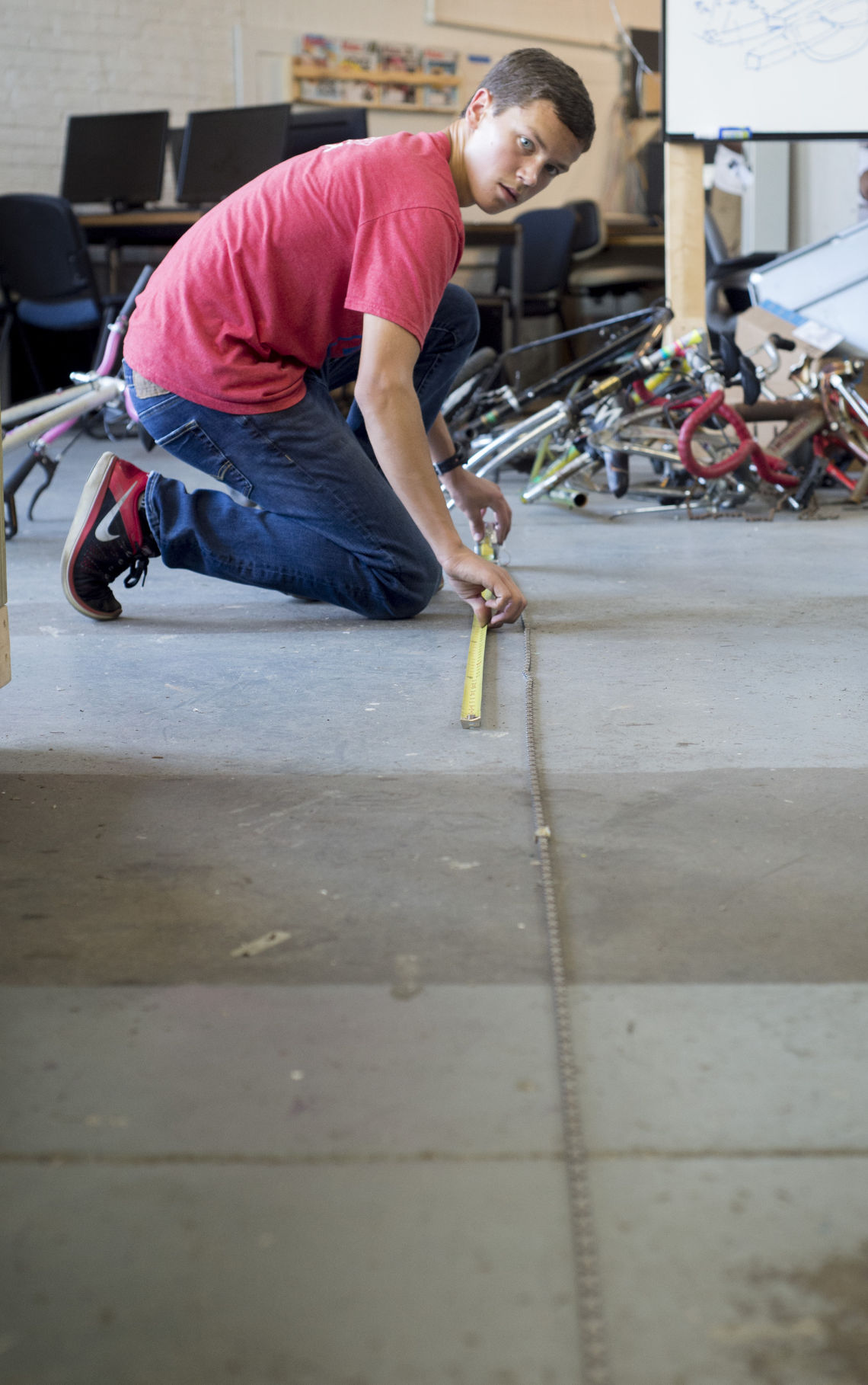 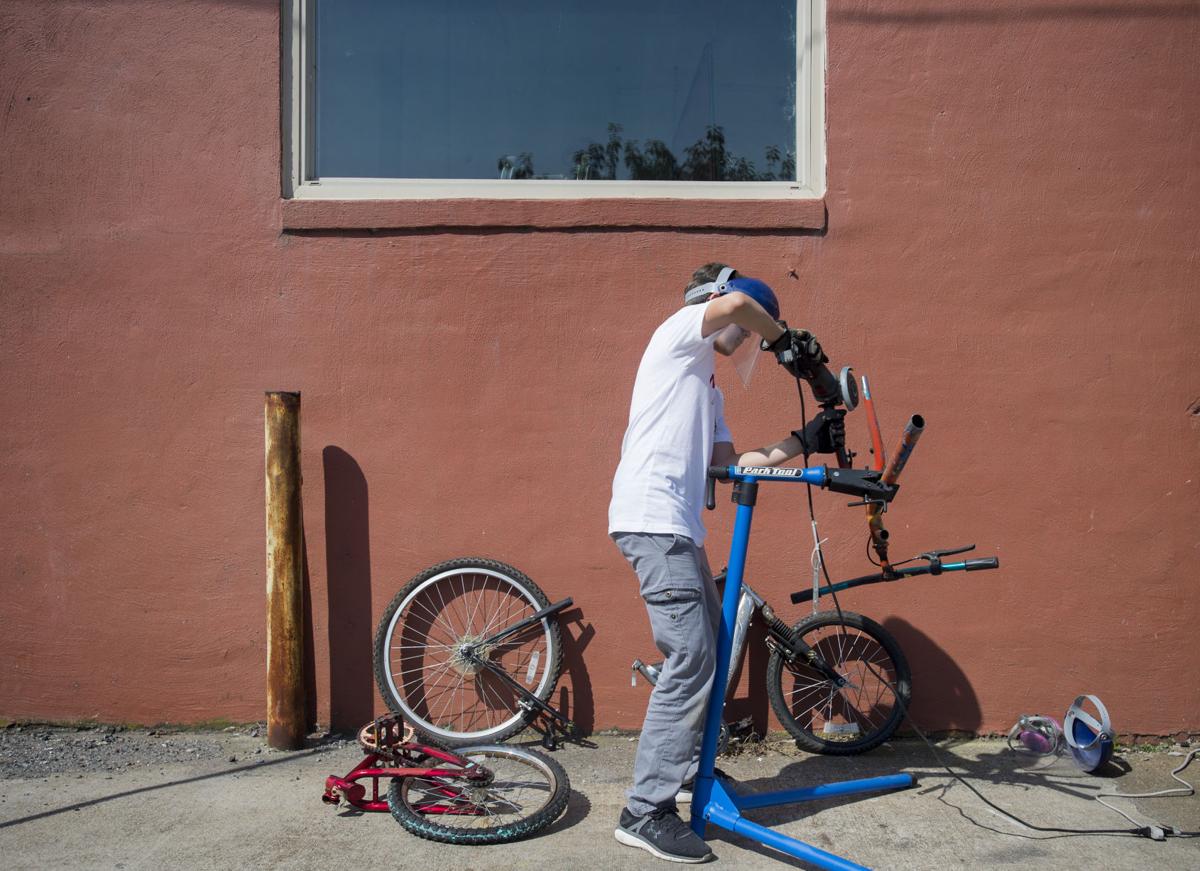 Lovelee Warner works on the pedals to her chopper bike during Vector Space's Hill City Bike Project in Lynchburg, Va.

A small group of Lynchburg teens have been hard at work the past week at Vector Space downtown, souping up old bike parts into some crazy creations.

Prompted with a bike design and a business sponsor, students working on the Hill City Bike Project had to design, cut, drill, weld, paint and tinker using a scrapyard of bike parts and materials. Their work was done under the watchful eye of their instructors: Vector Space co-founders Adam and Elise Spontarelli oversaw technical construction of the bikes, while Jawansa and Michelline Hall, of Blackwater Branding, offered guidance on the visuals and design.

Jacob Winters, 15, picked a tall bike design to mesh with his sponsor, Academy Center of the Arts, whose lettered logo is attached to the bike’s wheels.

“That one just really looked crazy, and … I’m the only person I know who’d have a bike like this,” he said.

He said he’s had a little experience working with tools and cars at home, but he was looking forward to the hands-on work and the chance to weld for the first time. When it comes time to show off his bike with the others during Get Downtown in September, he’s pretty confident he’ll be able to get up on the contraption and get it rolling.

“I think it’ll be a lot of fun, and it’s been a really great experience,” he said.

This is the second “intensive camp” Vector Space has held for older students — and its first bike camp — since opening its 5th Street location last spring. With the heavy tool usage and safety precautions, Elise Spontarelli said this one had to be geared toward older students in high school.

“This is one of the few student projects that is really focused on mechanics and engineering,” she said. “Usually there’s some electronics or 3D printing … but this camp is focused specifically on mechanics.”

Eight students ages 15 to 18 looked up their bike design and worked from photos, drafting out measurements and layout of the bike. They used mismatched bike parts from Bikes Unlimited, Scene3, L. Oppleman pawn shop and Lynchburg College, tweaking, welding and painting as they went.

The project cost $260 for each student to take part, with one scholarship provided to a student who might need it. Spontarelli said Vector Space tries to assure finances aren’t an issue for students wanting to work on a project.

Spontarelli said many of the teens were excited to get welding but may have found it more challenging than they first imagined.

“Working on them with something that they really can take ownership of and making decisions on — sometimes that means that they put together a bike, and it doesn’t ride,” she said.

The students will be able to keep the bikes once the project is finished, but Spontarelli said some of the sponsors want to keep hold of them for a spell. Sponsors helping to supply the project included the Academy Center of the Arts, F. Read Hopkins Pediatric Associates and bike groups like Bikes Unlimited and Greater Lynchburg Off-Road Cyclists.

Next up for Vector Space is a computer-building project for high school students in the fall, which tech company Cognizant will sponsor. Adam Spontarelli said that project will be a little different, meeting for a few hours twice per week for six weeks.

When it comes to summer camps, Elise Spontarelli said there aren’t many others that can get students up in the morning to get excited about math.

“It’s fun for us to get them enjoying and using the skills that they’ve learned to make cool things, for them to see the practicality of math and things that are not always exciting in school,” she said.

Bike construction came down to the wire Friday, and even though hardly any of the students completely finished, parents were excited and impressed by the bikes.

The instructors needed to order a few additional parts for safety and functionality, like tires and brake lines, so a final “bike clinic” day in a week or two will see the finishing touches and tweaks on the students’ projects.

“This was our most ambitious project yet, in my opinion,” Adam Spontarelli said at the end of the day Friday, parts strewn everywhere and paint-covered tarps balled up on the floor. “… I think all of the students have this sense of accomplishment … even if they didn’t get to ride it away today.”

All eight bikes will be on full display during a showcase at Get Downtown on Sept. 8.

A downtown business is moving up — literally.