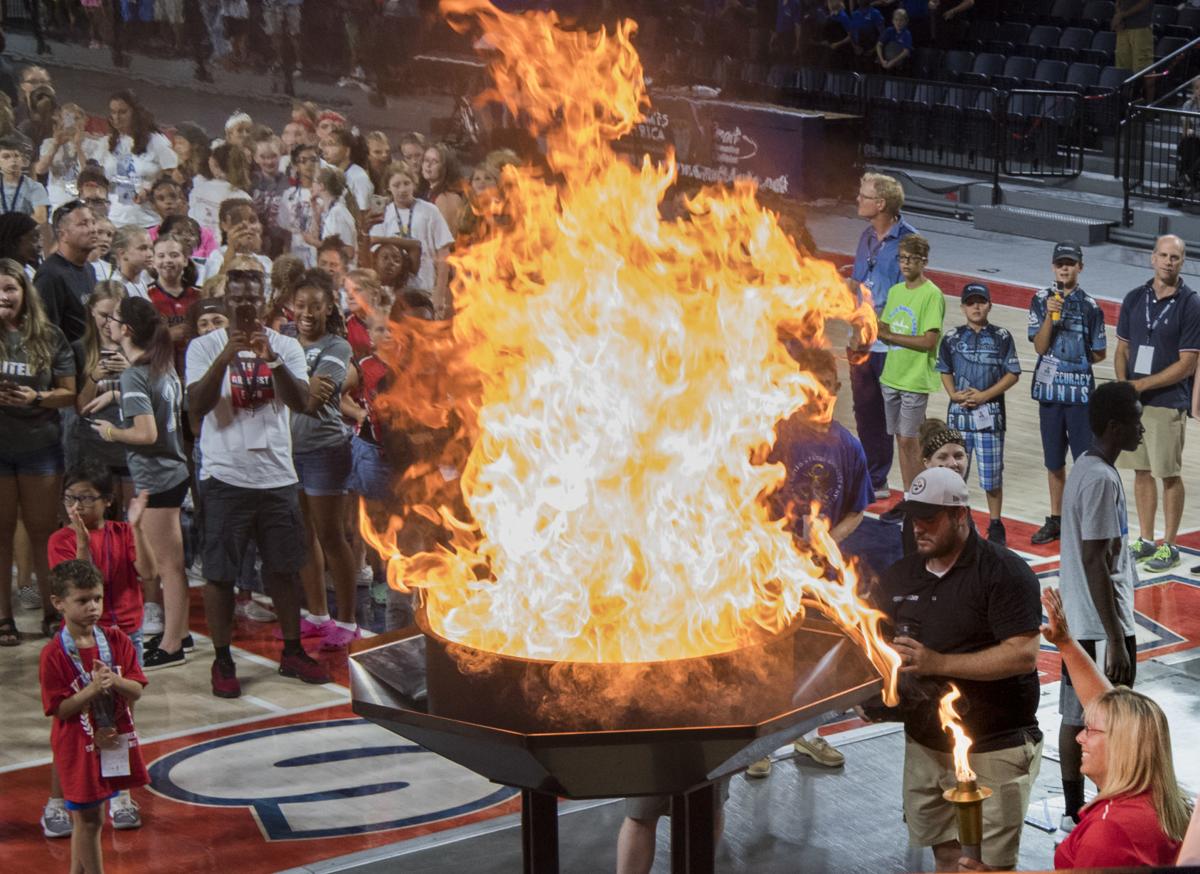 A giant American flag was spread over the Vines center basketball court prior to the National Anthem. (Photo by Lee Luther Jr.) 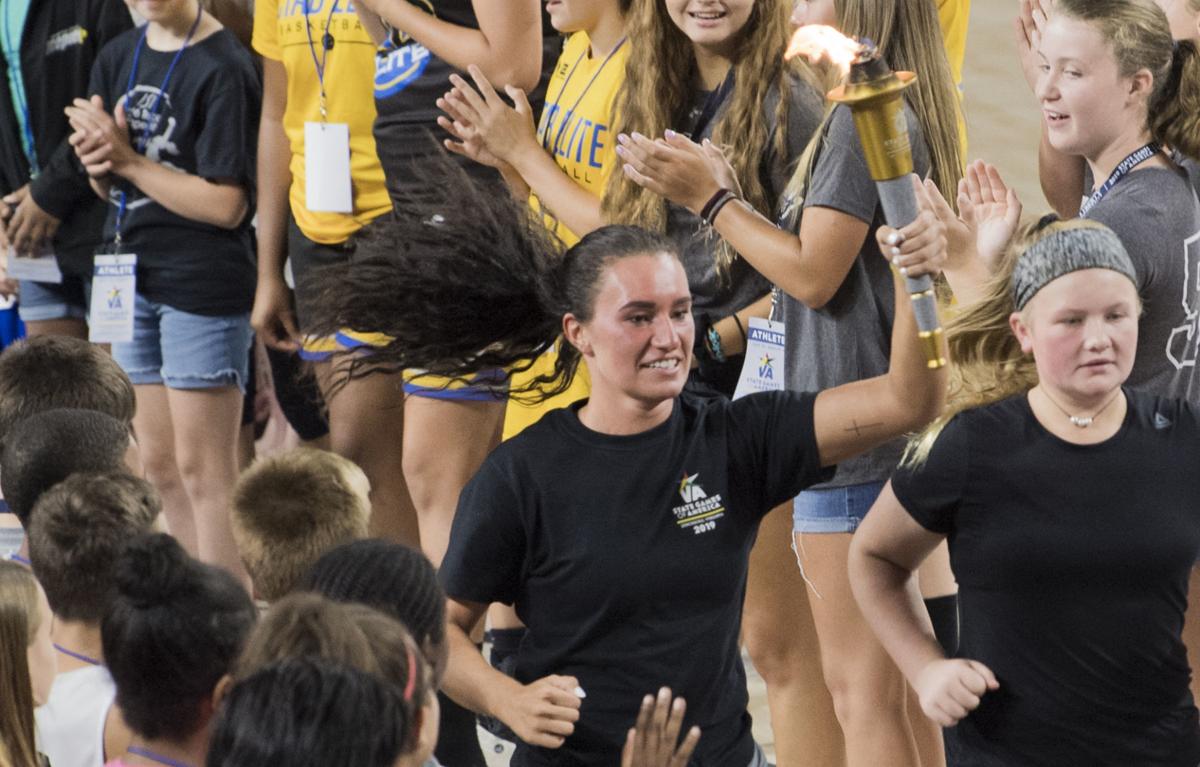 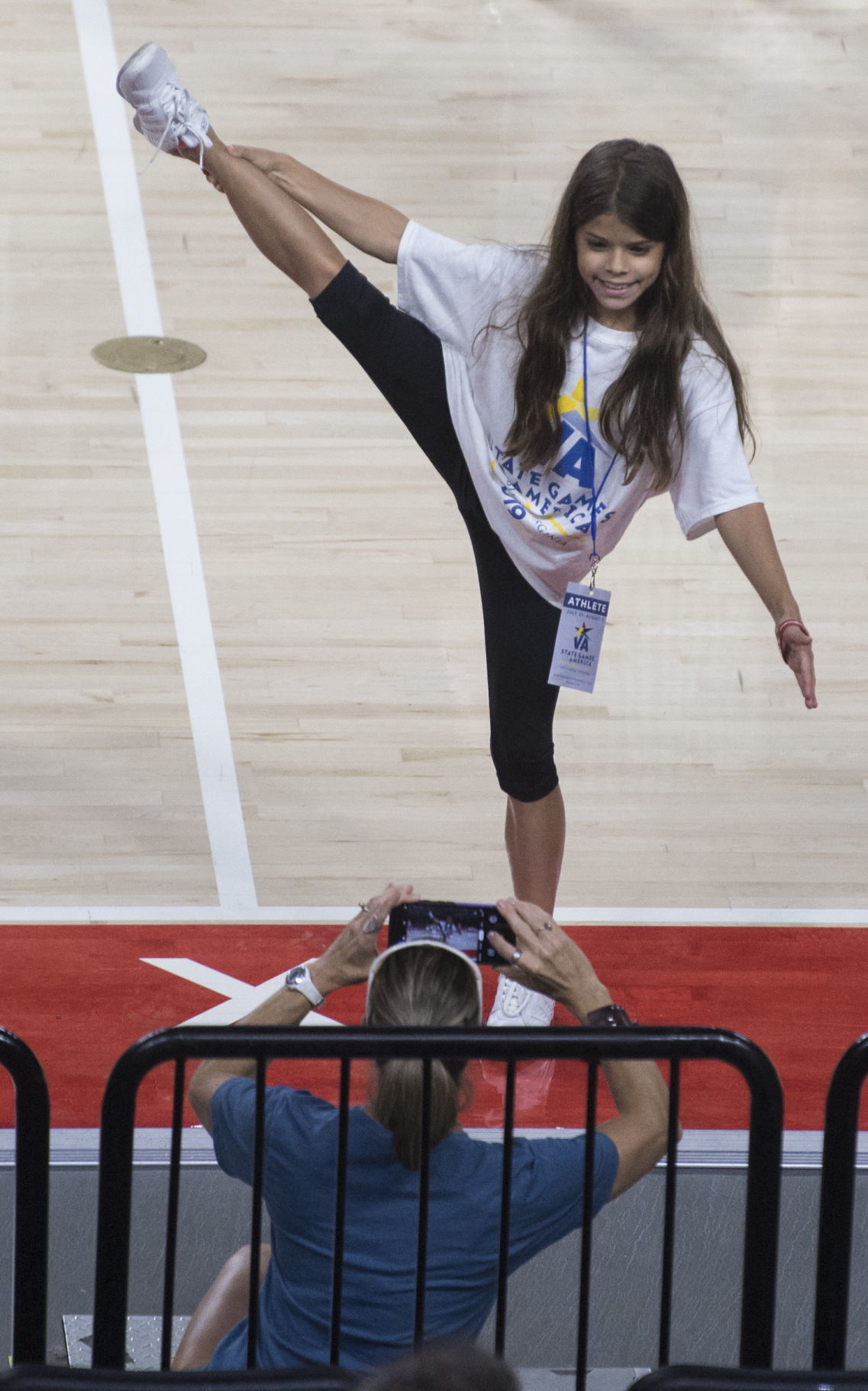 An athlete gets her photo taken prior to the opening ceremonies on Friday night.(Photo by Lee Luther Jr.) 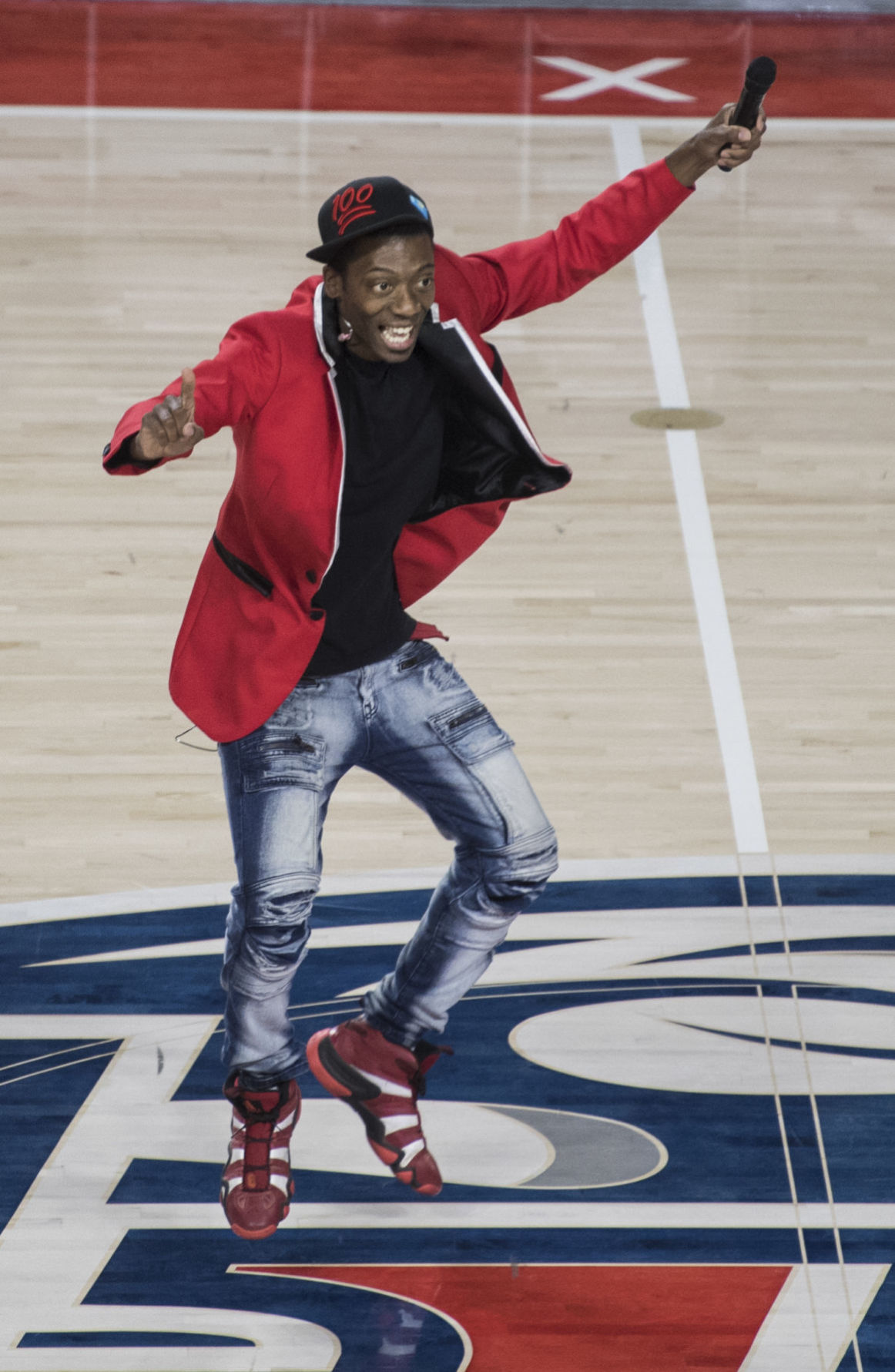 Master of ceremonies Jdrew gets the crowd spirit up with one of two dances Friday night. (Photo by Lee Luther Jr.) 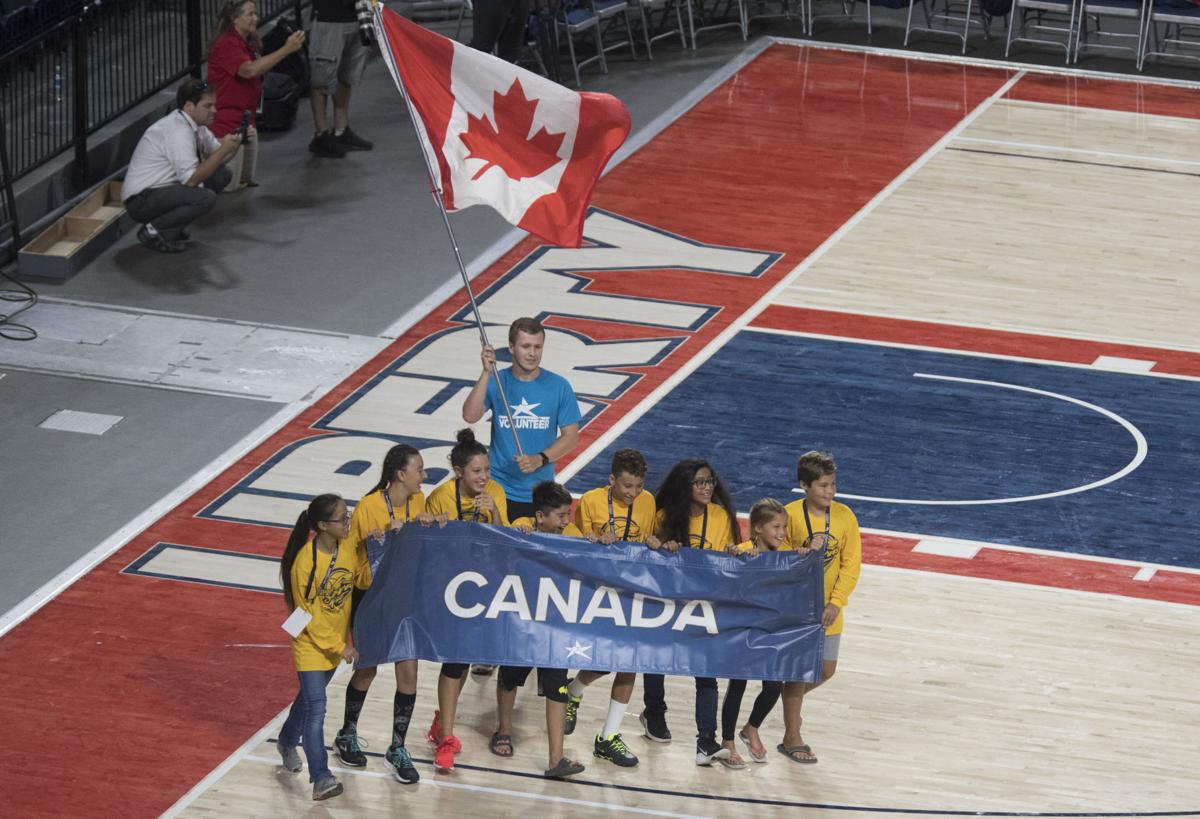 The Canadian banner bearers and flag bearer parade around the Vines Center during the opening ceremony. (Photo by Lee Luther Jr.)

A giant American flag was spread over the Vines center basketball court prior to the National Anthem. (Photo by Lee Luther Jr.)

An athlete gets her photo taken prior to the opening ceremonies on Friday night.(Photo by Lee Luther Jr.)

Master of ceremonies Jdrew gets the crowd spirit up with one of two dances Friday night. (Photo by Lee Luther Jr.)

The Canadian banner bearers and flag bearer parade around the Vines Center during the opening ceremony. (Photo by Lee Luther Jr.)

Jordan Dail was approached by representatives from the State Games of America about one week ago with an opportunity she couldn’t turn down: carrying the Olympic-style torch onto the Liberty University campus to cap the opening ceremony of the biennial games being held for the first time in Lynchburg.

Dail, a standout softball pitcher at Brookville High School and rising junior at the University of Oregon, relished the chance to carry the lit torch among the athletes from Virginia on the Vines Center court before passing it off to LU softball coach Dot Richardson, who lit the caldron to signify the official start of the games.

“It was really cool to actually go through all the kids and everything with them waving at you and stuff,” Dail said. “That was awesome. I liked it.”

The opening ceremony capped a busy Friday and signaled the start of a hectic final two days around the greater Lynchburg area.

Virginia Amateur Sports president Dan Foutz said around 11,000 athletes have either competed in events or are scheduled to compete from Monday through Sunday in the biennial State Games of America. The athletes range from age four (track & field) to 94 (figure skating). There are 46 sports being played at 44 different venues in the greater Lynchburg area, Roanoke and Christiansburg. Forty-nine of the 50 states are represented (North Dakota did not send any athletes), plus athletes from Washington, D.C., the U.S. Virgin Islands, Canada, Spain, France and Mexico also are in attendance.

“We’re an amateur event and that’s the spirit of amateur sports,” Foutz said. “That’s why I took this position. I love amateur sports. It’s a big place in our country for that, and it’s an international thing. When we do some of these off-the-wall things like floorball and foot golf and those kind of things, you try new things, you bring in new people.”

The opening ceremony was originally scheduled to be held at the 25,000-seat Williams Stadium, but was moved to the 9,547-seat Vines Center around midday Friday with the forecast calling for thunderstorms. Thursday’s slate of games was impacted by strong thunderstorms, and Foutz saw forecasts that called for more of the same Friday evening.

Foutz consulted with Liberty University and its police department before making the decision to move the opening ceremony indoors. The move forced the ceremony to be trimmed from its original plan, which would have the athletes from their respective states following flag bearers into Williams Stadium, similar to what’s seen at the Olympic Games.

Instead, a flag bearer followed a pair of banner bearers through the Vines Center in a ceremony that lasted roughly one hour.

“We went on information that was for the safety of the participants and their fans,” he said, “and we’ll always yield to that.”

Dail’s run with the torch began at the National D-Day Memorial in Bedford earlier Friday. She was handed the torch by World War II and D-Day Veteran Herbert “Bill” Sisk. Sisk, like Dail, is a Lynchburg native and was honored during the opening ceremony for his military service.

He served as a radio operator and on D-Day, June 6, 1944, Sisk landed on Utah Beach in Normandy, France, as part of the U.S. Army’s 90th Infantry Division, assigned to help the wounded and take German prisoners of war.

A month later on July 19, he was wounded and spent four months in a hospital in England before rejoining his troop in France which was responsible for liberating concentration camps in Flossenburg, Germany.

“It was just an honor … getting to meet the World War II veteran and then being able to talk to him a little bit and get the torch from him, as well as passing it off to Dot,” said Dail, who competed in Commonwealth Games growing up and won a pair of gold medals in 12U and 14U softball. “I love Dot. She’s a phenomenal person and a phenomenal athlete. It was awesome just to be able to take part in that.”

Foutz said there will be a 45-minute fireworks show Saturday night at Williams Stadium and will end with David “The Bullet” Smith being fired out of a cannon.

Saturday is the busiest day of the week with 34 events, and Foutz hopes most of the athletes and their families return to Williams Stadium for the fireworks show.

The 2021 State Games of America are scheduled to be held in Ames and Des Moines, Iowa, for the first time.