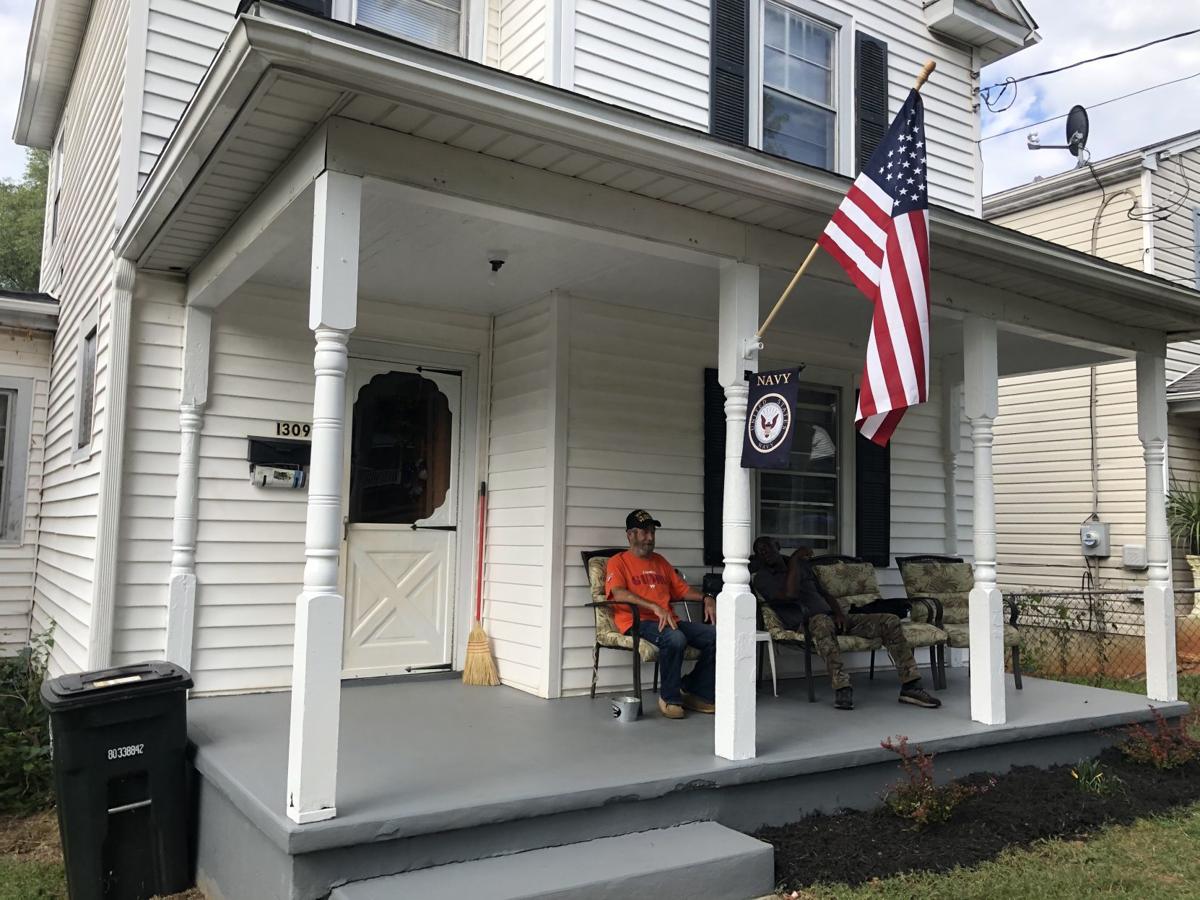 Charles "Butch" Stratton (left), a U.S. Navy veteran, and Dan Robinson (right), a U.S. Army veteran, share a moment on the porch of a home for veterans on Garfield Avenue in Lynchburg, Va. Thursday, Sept. 26, 2019. 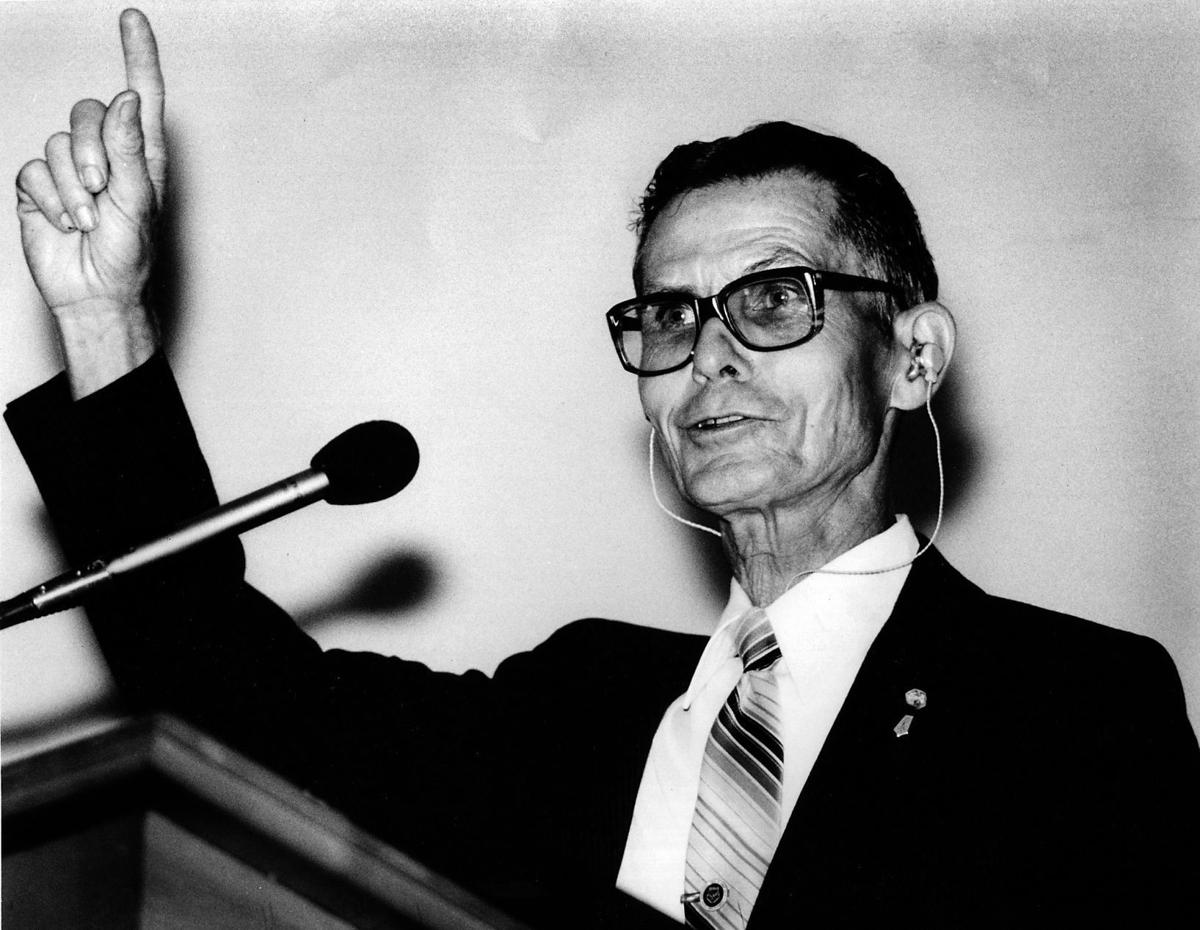 Desmond T. Doss addresses the crowd at the dedication of the new Lynchburg Seventh-day Adventist school on July 14, 1984. Doss, a Lynchburg native, was the first conscientious objector to receive the Congressional Medal of Honor for actions in World War II.

Charles "Butch" Stratton (left), a U.S. Navy veteran, and Dan Robinson (right), a U.S. Army veteran, share a moment on the porch of a home for veterans on Garfield Avenue in Lynchburg, Va. Thursday, Sept. 26, 2019.

Desmond T. Doss addresses the crowd at the dedication of the new Lynchburg Seventh-day Adventist school on July 14, 1984. Doss, a Lynchburg native, was the first conscientious objector to receive the Congressional Medal of Honor for actions in World War II.

Once vacant, Desmond Doss’ birthplace has become a sanctuary for homeless vets

After nearly two decades of living on the street, U.S. Navy veteran Charles “Butch” Stratton now has a roof over his head thanks to a group of local veterans working to house their homeless brothers in arms.

Aside from the shelter it provides, the home has a special meaning for Lynchburg native Stratton: the two-story house on Garfield Avenue he now calls home is said to be the birthplace of Desmond T. Doss — the first conscientious objector to be awarded the Medal of Honor for heroic acts during the Battle of Okinawa.

In May 1945, Doss, who was an army medic for the 77th Infantry, single-handedly saved 75 wounded soldiers by lowering them down a 400-foot cliff, all while facing heavy enemy fire. His story later was immortalized in biographies, documentaries and the award-winning 2016 film, “Hacksaw Ridge.”

Now, after sitting vacant, Doss’ former home is brimming with life. On Wednesday, a second veteran moved in to the two-story, wood-frame home and a third bedroom has been outfitted to house another.

“It feels good, it feels good,” Stratton, who served during the Vietnam War-era and has lived in the home since late August, said last week as he sat on the front porch.

The home, which was built in 1910 and recently has been restored, has become the centerpiece of the Lynchburg Area Veterans Council’s refocused effort to help house homeless veterans living in the region.

Since last October, social workers have identified and served 67 homeless veterans, according to data collected from Miriam’s House, a Lynchburg nonprofit dedicated to ending homelessness. The veterans council hopes to eliminate homelessness among veterans entirely.

In July, the council partnered with the Lighthouse Community Center to open a home for homeless veterans on Craddock Street. But the Garfield Avenue home is the first house the council has funded on its own.

“We were created to help veterans who are in need right now,” said Otto Davis, the founder of the veterans council. “I’m so excited about what we’re doing; its indescribable.”

With the help of donations and contributions from local veterans, the council is renting the home on behalf of its new residents, according to council President Thomas Current.

Donations also have allowed the council to outfit the home with furniture, a brand-new washer and dryer, plenty of food and other essentials.

“Ninety-nine percent of everything in this house was donated,” said Gail Stokes, a member of the local Daughters of the American Revolution chapter who often works with the veterans council.

Stokes and others also have made sure the home is as cozy as possible by devoting time to the smallest details. They’ve installed new carpets, purchased new bedding, repainted the interior walls and created colorful window curtains out of an old tablecloth.

On Oct. 12, the veterans council will hold a public ceremony at the home featuring Desmond Doss Jr. and Lynchburg Mayor Treney Tweedy — 74 years to the day after President Harry S. Truman presented Doss with the Medal of Honor at a ceremony on the White House lawn.

For Stratton, it is an honor to live in the same house a local hero once called home. As a former member of the military and a deeply religious man himself, Stratton said Doss’ own commitment to service and faith strongly resonates with him. He is looking forward to meeting his son next month.

Parking will be available at the Tree of Life Ministries building on 12th Street and at Murry’s Steak Store on Campbell Avenue.

Parking will be available at the Tree of Life Ministries building on 12th Street and at Murry’s Steak Store on Campbell Avenue.