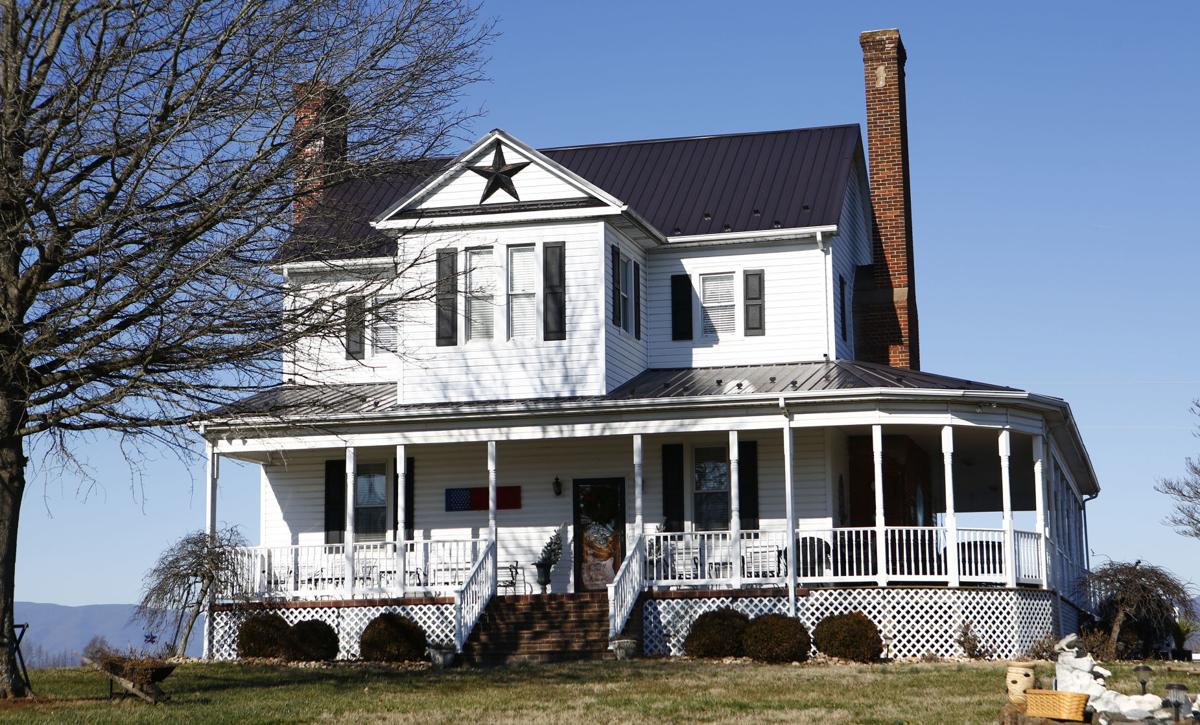 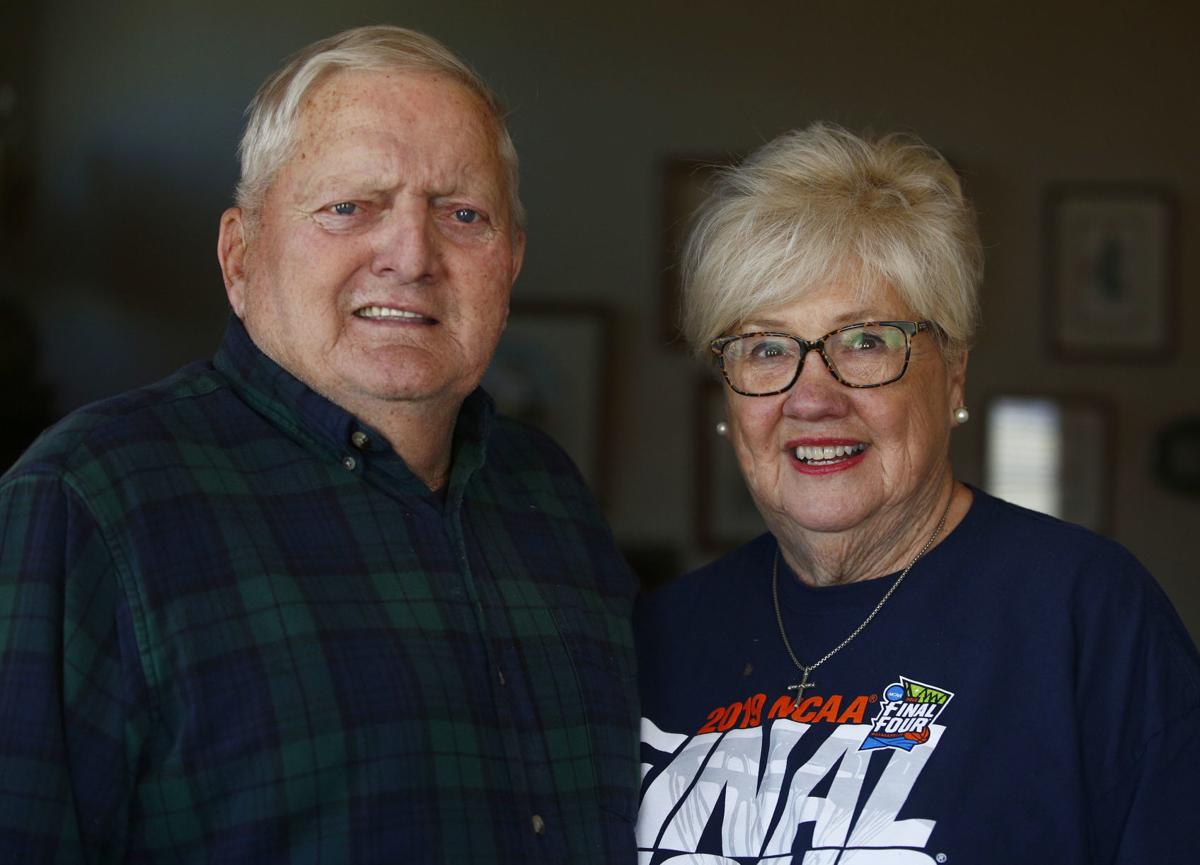 Ann Ferguson, pictured with her husband, Wayne, bought her childhood home from her parents in 1995. 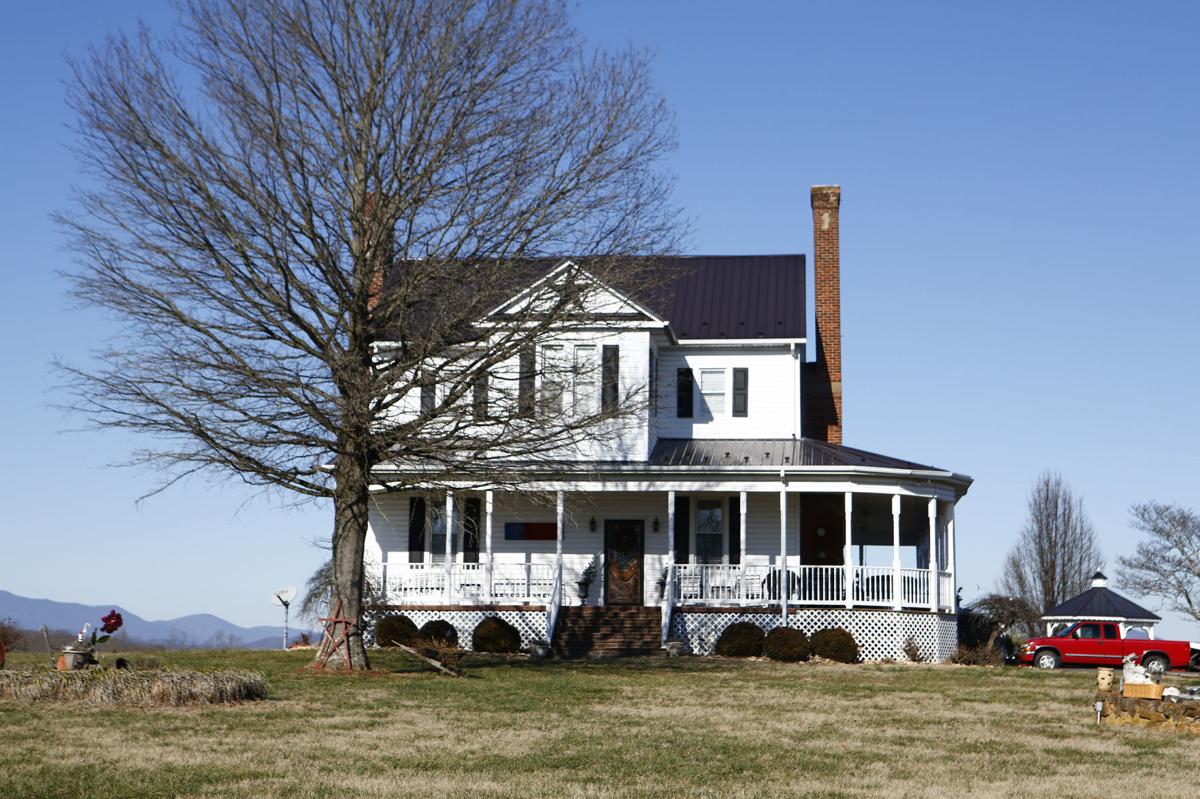 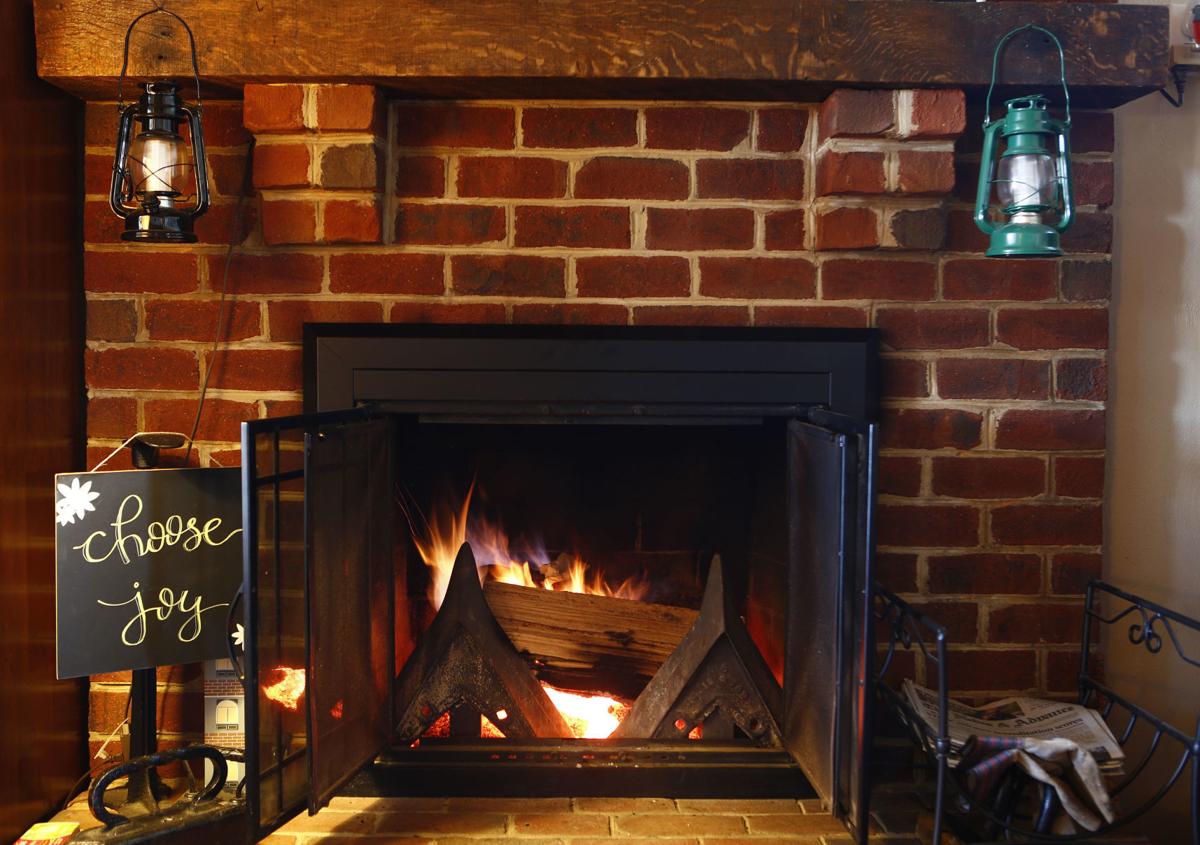 A fireplace at the home of Wayne and Ann Ferguson in Bedford on January 21, 2020. 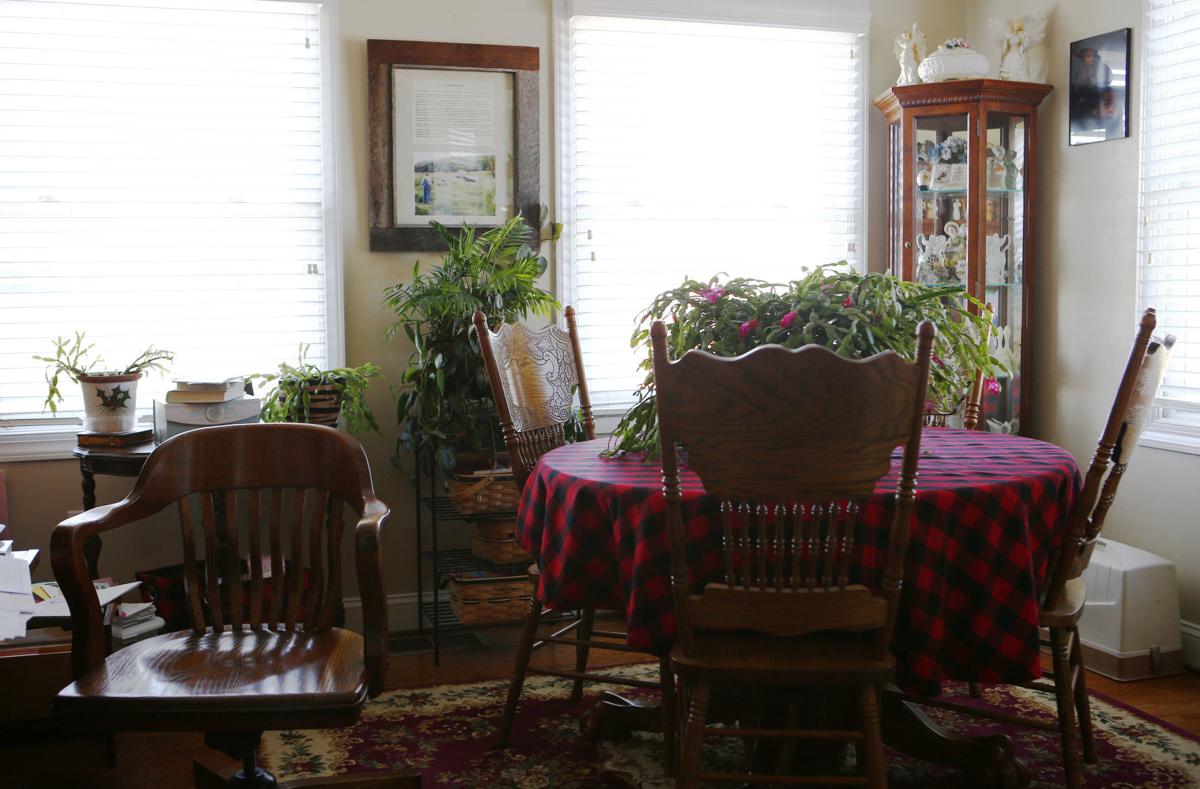 A dining area at the home of Wayne and Ann Ferguson in Bedford on January 21, 2020. 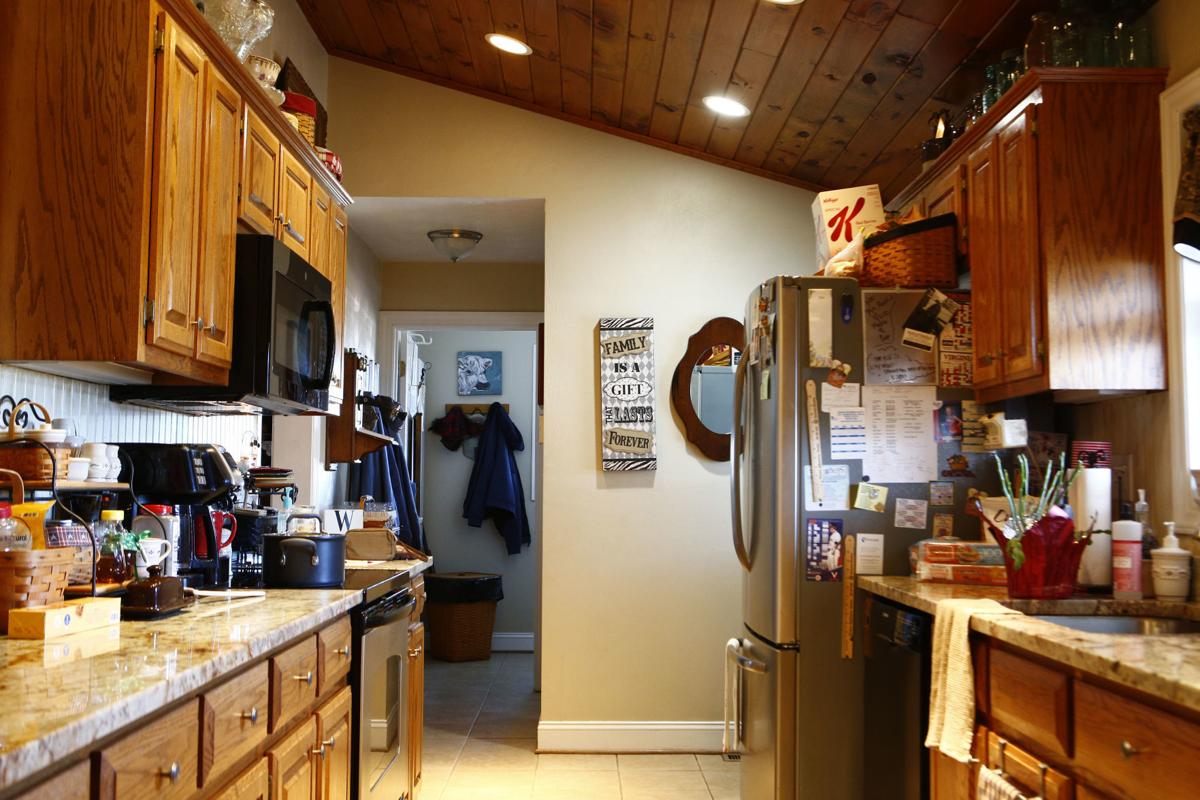 The kitchen at the home of Wayne and Ann Ferguson in Bedford on January 21, 2020. 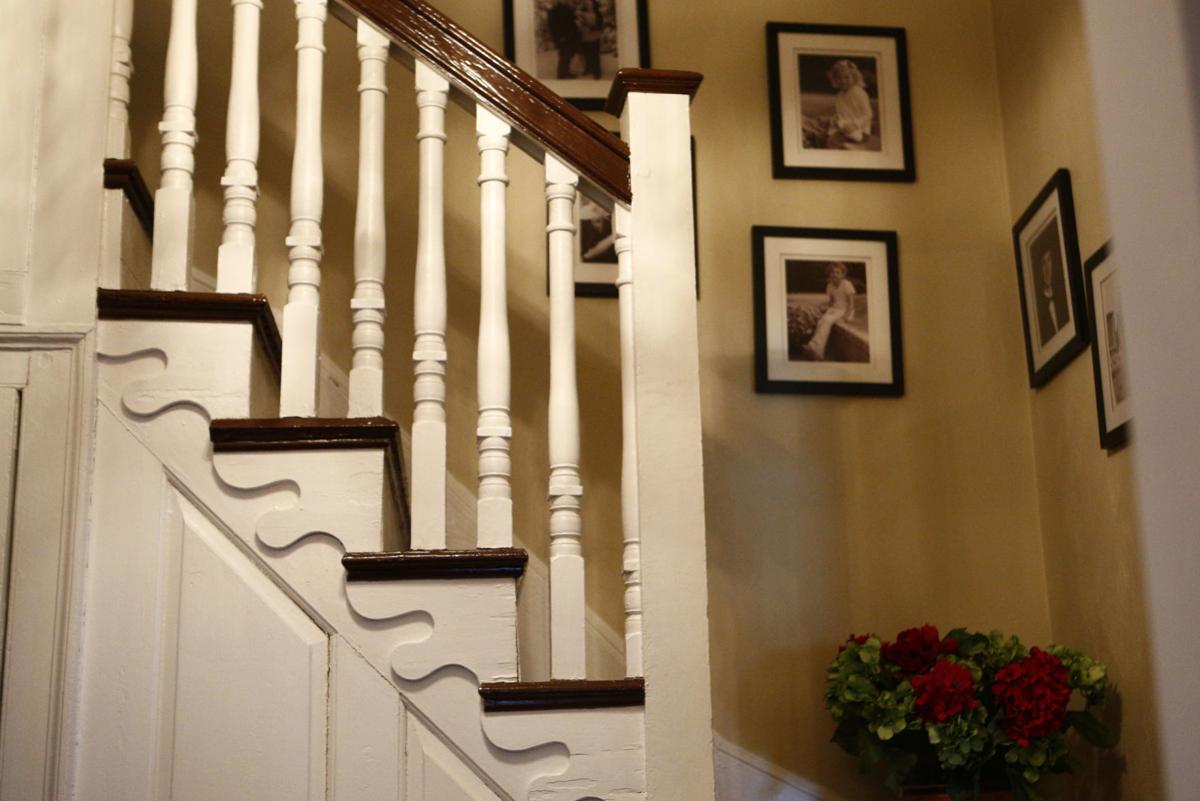 Stairs at the home of Wayne and Ann Ferguson in Bedford on January 21, 2020. 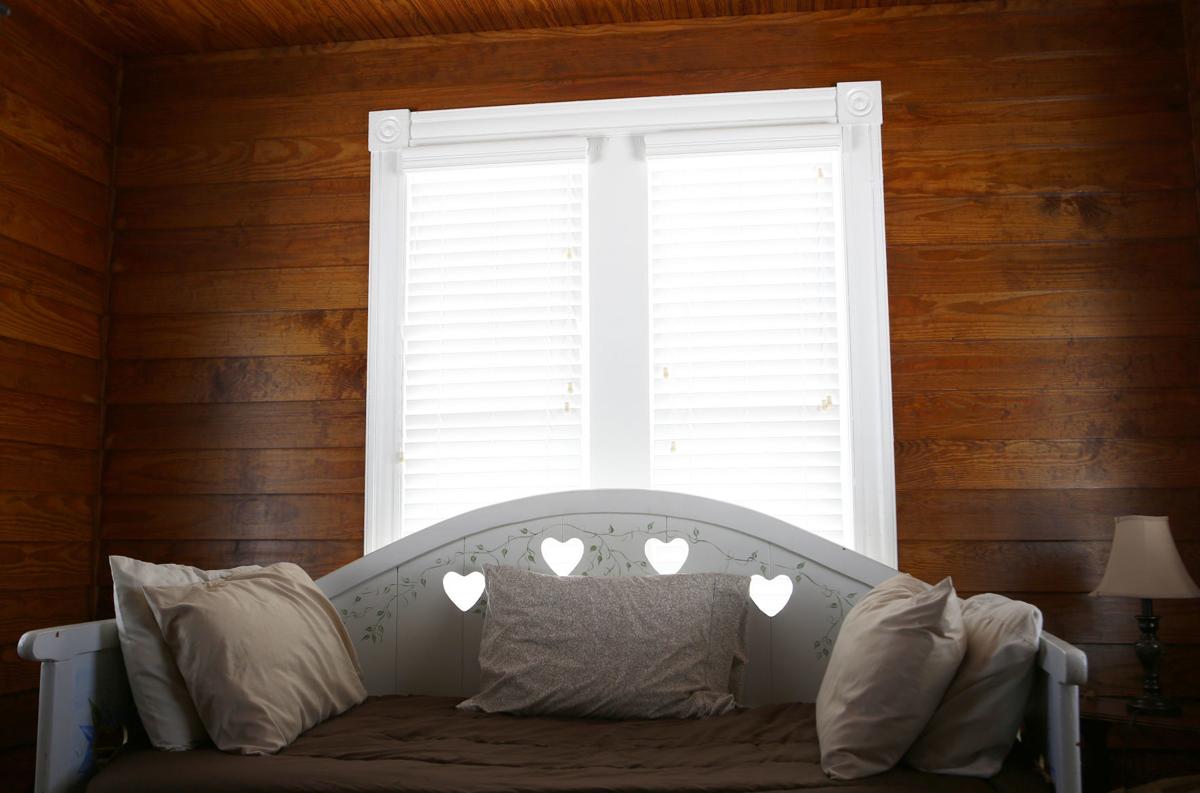 a bench at the home of Wayne and Ann Ferguson in Bedford on January 21, 2020. 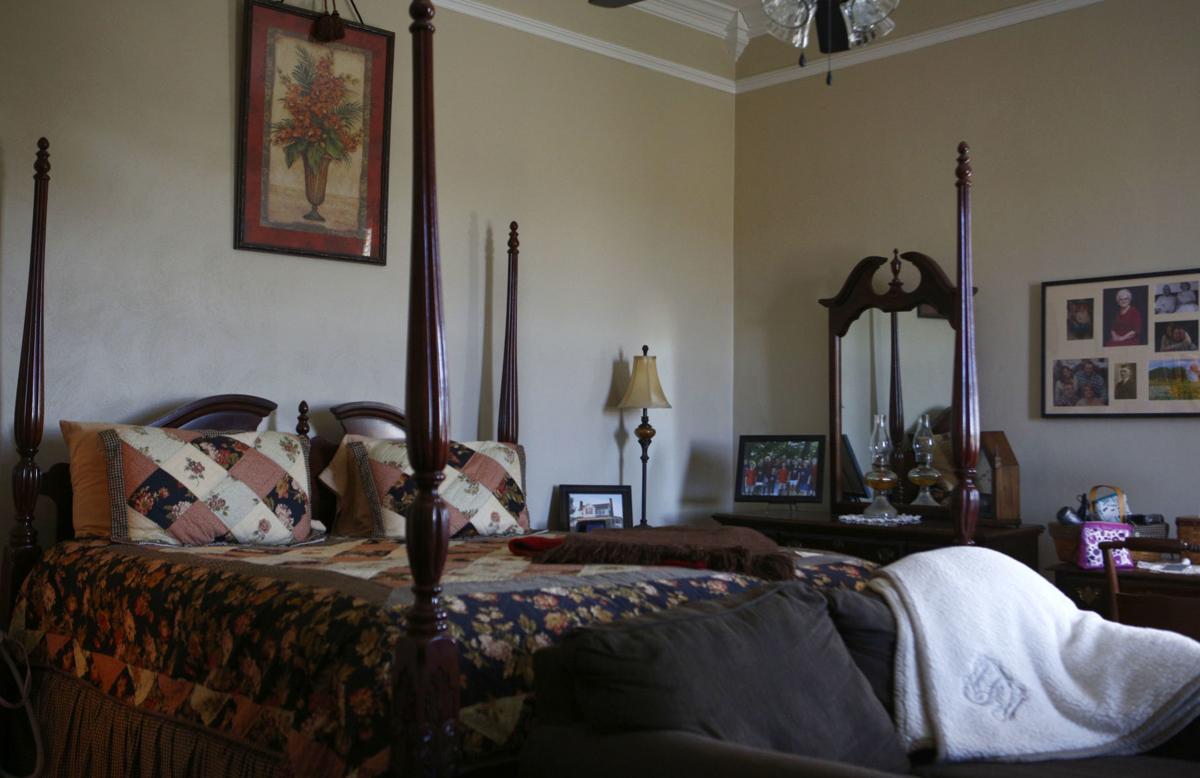 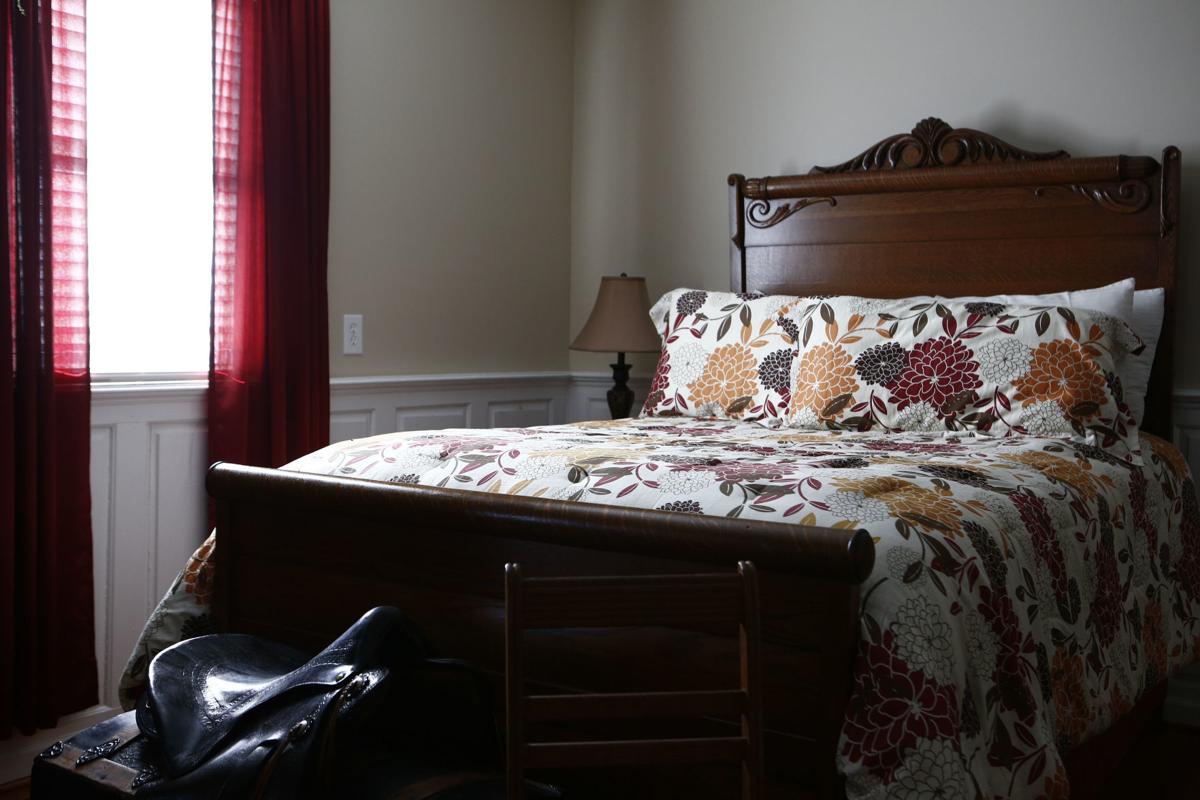 Ann Ferguson, pictured with her husband, Wayne, bought her childhood home from her parents in 1995.

A fireplace at the home of Wayne and Ann Ferguson in Bedford on January 21, 2020.

A dining area at the home of Wayne and Ann Ferguson in Bedford on January 21, 2020.

The kitchen at the home of Wayne and Ann Ferguson in Bedford on January 21, 2020.

Stairs at the home of Wayne and Ann Ferguson in Bedford on January 21, 2020.

a bench at the home of Wayne and Ann Ferguson in Bedford on January 21, 2020.

>> Sign up for our weekly Welcome Home email newsletter <<

The white farmhouse with its massive chimneys and wraparound porch is a landmark on U.S. 460 in Bedford with a stunning view of the Peaks of Otter stretching out behind it.

Named Sunnyside, the plantation home has stood since 1791, surviving generations of threats, from Indian attacks to pillaging Civil War soldiers to tornadoes. But it was a late spring thunderstorm in 2010 that almost destroyed it.

Ann and Wayne Ferguson own the home and almost 60 acres of farmland surrounding it. The couple had spent May 28, 2010 preparing for a yard sale and decided to drive to Wendy’s for dinner.

When Ann and Wayne got to their home, they could see smoke. Lightning had struck the house and sparked a blaze in the attic. A passerby stopped and called 911.

By the time it was over, the fire had taken a heavy toll on the house. The roof partially collapsed. The second floor was charred and the first floor was flooded by water used to extinguish the blaze.

“It was a nightmare,” Ann said. “Because the house was so old and everything with the plaster and the old way the wood was put together, the fire had a hard time getting through. That is what saved it.

“When I was young, I always thought that if it caught on fire, it would go up in an instant but it didn’t.”

It took about four months, but the house was repaired and some of its old architectural features were saved, including the tight staircase leading to the second floor. The fire also revealed some things Ann didn’t know about the house she was raised in — work crews uncovered a fireplace, window and dark walnut wainscoting in an upstairs bedroom.

Ann’s parents, Eva and Victor Mitchell, purchased the house in 1952; Ann bought it from them in 1995 and worked to fix up her childhood home.

“If I hadn’t have come and redid it, it would have just gone like a lot of old homes you see,” she said. “If a house isn’t lived in, it’s like its not alive. You have to live in a house for it to stay alive.”

Few houses live more than 200 years. In that time, Sunnyside has witnessed a lot of history from its lofty vantage point.

Built by Col. William Leftwich in 1791, the massive chimneys framing the house had lookouts to guard against Native American attacks and later, against Union troops during the Civil War.

Raiding parties inevitably made their way to Sunnyside. During one incident, a servant gathered up the prize horses and raced with them to the lower fields to hide them among the trees. The horses weren’t tied securely and soon came trotting back to the lawn, where they were seized by Union troops, Marie Powers and Elizabeth Arthur wrote in “Bedford Villages Lost and Found.”

“On another occasion Major Leftwich went out the front door to face a swarm of Yankees stabbing their swords and bayonets into the family cemetery looking for buried treasure. When he objected to this activity, they finally moved on.”

The old cellar was used as a ballroom in the plantation’s early years. A three-room schoolhouse known as Rucker Branch School once sat on the property, as well as a cannery.

“Col. William Leftwich, builder of Sunnyside was described as a handsome man who wore his hair in a queue,” wrote Powers and Arthur. “He owned several large plantations and over 100 servants.”

With its sprawling view of the mountains, Sunnyside has played host to a number of celebrations, from weddings and receptions to family reunions.

Ann’s parents purchased the estate in 1952. Victor farmed the land while Eva worked at Rubatex in Bedford. The couple had four children, all of whom attended the New London Academy for all 12 years of their education, except the youngest who graduated from Liberty High School after the academy was converted to an elementary school.

That 2010 storm isn’t the only one Sunnyside weathered. A June 1993 windstorm took out a number of cedar, oak and maple trees lining the property. A tornado in 2002 caused minor damage to the property, but obliterated a house across U.S. 460.

Ann purchased her childhood home after her father and first husband both died in 1993. She began renovating it in 1997, moving her mother into her home in Vinton while the work was underway.

Ann and Wayne married in 1999 and he now farms the land as her father once did. He raises beef cattle.

In all, the house still sits in the same footprint it occupied when Ann’s parents purchased it. The layout inside, though, has changed.

The couple took out a wall to create a large den. The small kitchen was carved out of what used to be a porch. What once was a living room at the front of the house now is a bedroom and vice versa. A sunroom was added to the Peaks of Otter side and the large front porch was extended to wrap around one side.

Following the fire, Ann worried one of the house’s original architectural components would be lost. The staircase leading to the second floor is steep and curved and doesn’t meet current building codes but the insurance company allowed them to keep that historic element.

“It’s so crooked that we didn’t know if they would allow that to stay,” she said. “... The queen-sized mattresses and things upstairs had to be put in through the window up there so they are there to stay because they will not fit to come back down the stairway. It’s a small opening.”

The importance of family is reflected all over the house in family photographs. There’s her parents as a young couple. Her father and her two children riding in a cart pulled by a mule, and portraits of the couple’s grandchildren climb the stairwell wall.

Both Ann and Wayne said their favorite spot in the house is in the den, sitting before the large fireplace with a wood crackling as it burns on plow points converted to a wood holder.

“Burning up the wood,” Wayne said with a smile.

In the summertime, though, that large front porch is the place to relax on a nice day.

The den is lined with shelves a couple feet below the 12-foot ceiling, displaying Ann’s Longaberger basket collection. A wagon wheel light fixture created by her father dangles on one end of the room.

The couple had two windows installed on the back wall of the den following the fire, but soon found there was a glare while watching television so Ann put up two glass panes with irises painted on them — her mother’s favorite flower.

A kitchen was carved from what once was a porch. It’s a narrow but functional space with rich, warm granite countertops with brown veining, matching the cabinetry.

“This really isn’t a big kitchen at all, especially when the kids and grandkids are here,” she said, adding sometimes she wishes the kitchen was a bit bigger.

The new first-floor bedroom, once the living room, features a built-in cabinet next to the fireplace that Ann believes once served as a wine cabinet. She keeps it closed in the winter since there is a draft inside it. A narrow hallway off that room leads to a master bathroom and closet.

“When you have a view, you have wind,” she said. “The Peaks side of the house is cold, especially if the wind blows.”

Ann remembers a different floor plan in this part of the house, creating a little room that was one of the warmest spots in the house. It was where she and her son slept the winter her first husband served in Korea.

Upstairs features guest bedrooms and a little room that extends over the front porch — Ann’s favorite place to read as a child with the windows open and a summer breeze blowing through the little space.

Some of the original red pine floors remain despite the fire damage. In other spaces, the wood had to be replaced with new flooring that matches the old.

The family farm extends all the way to the Big Otter River, where the couple’s grandchildren play in the summertime.

To Ann, that old house holds the memories of her lifetime, from enjoying the summer breeze and a good book as a child to the sandy, wet swimsuits she launders after her grandchildren spend all day playing in the river.

“It means everything to be able to live in a house that I was raised in.”

The white farmhouse with it massive chimneys and wraparound porch is a landmark on U.S. 460 in Bedford, a stunning view of the Peaks of Otter stretching out behind it.

Named Sunnyside, the plantation home has stood since 1791, surviving generations of threats, from Indian attacks to pillaging Civil War soldiers to tornadoes. But it was a late spring thunderstorm in 2010 that almost destroyed it.