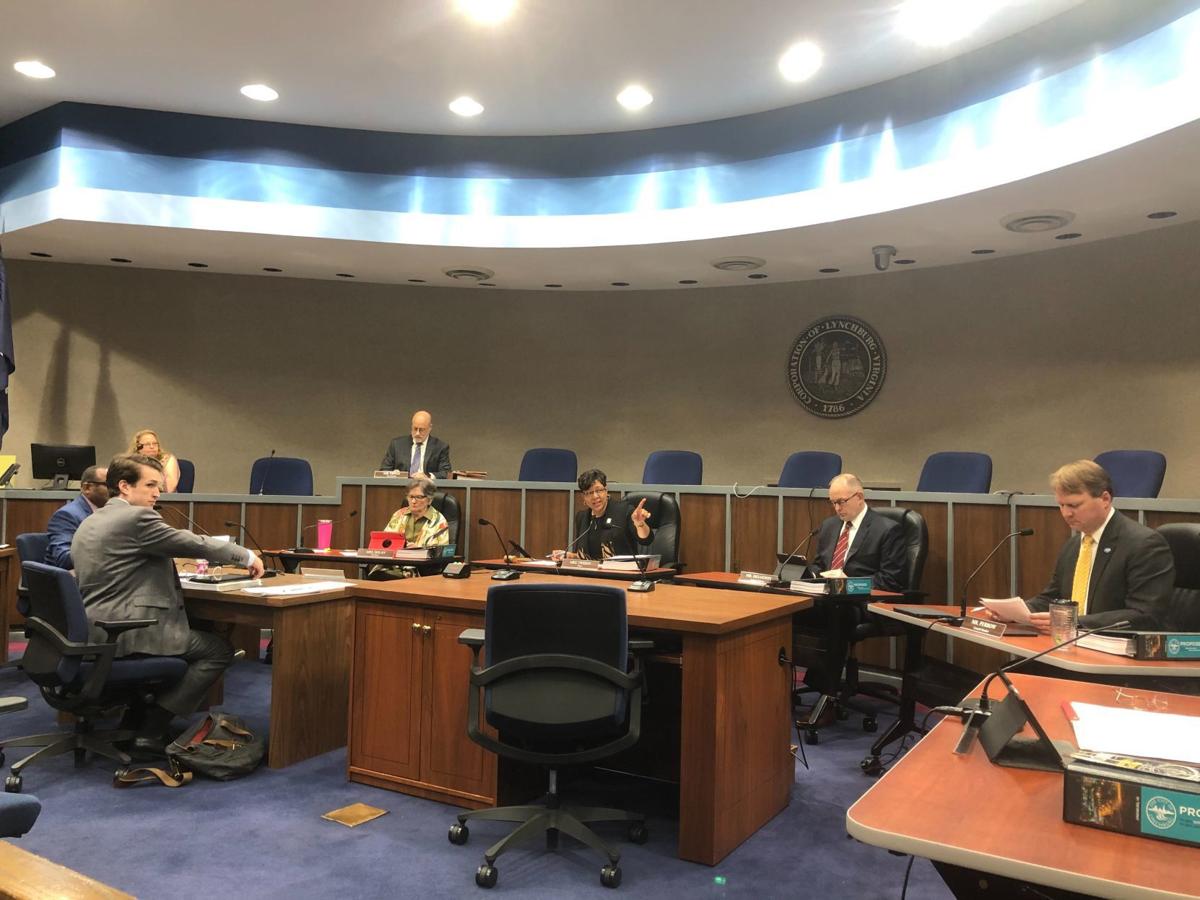 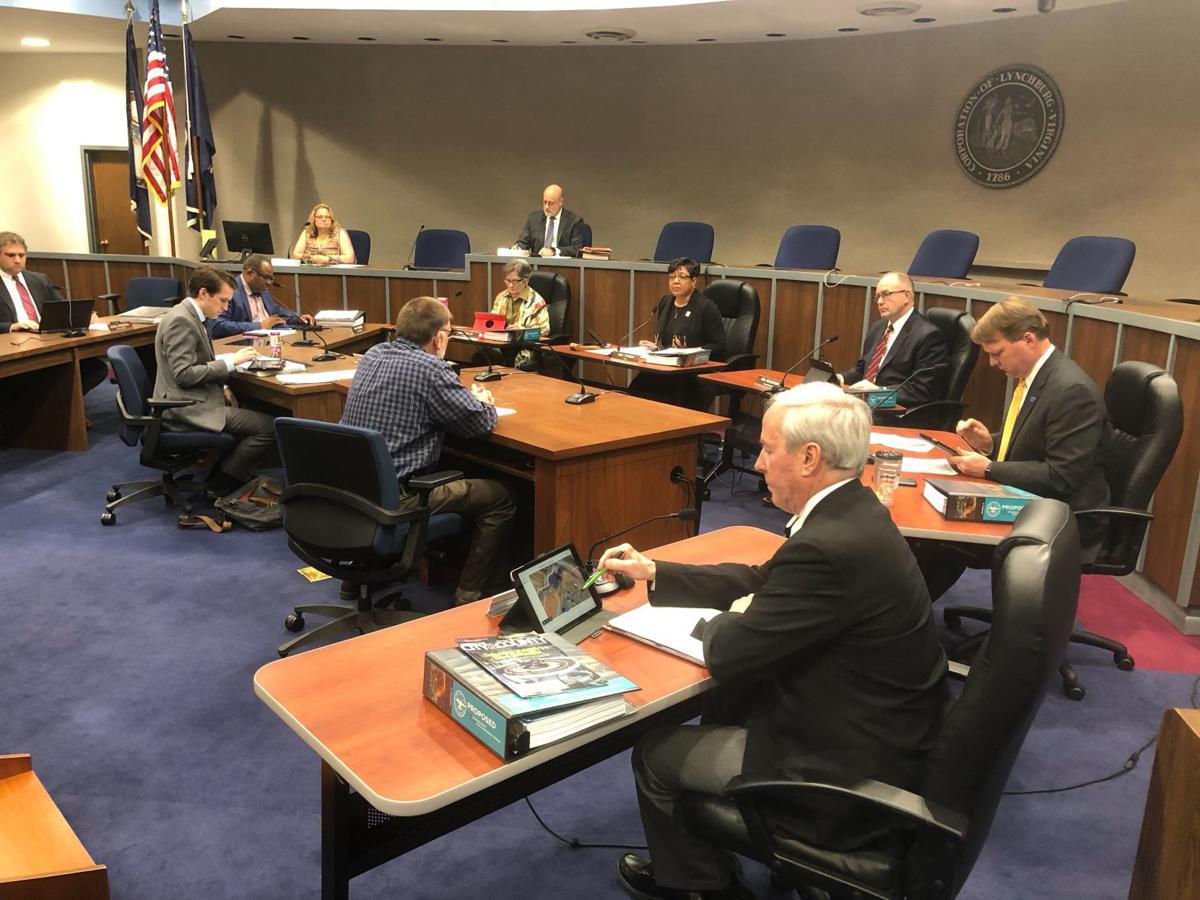 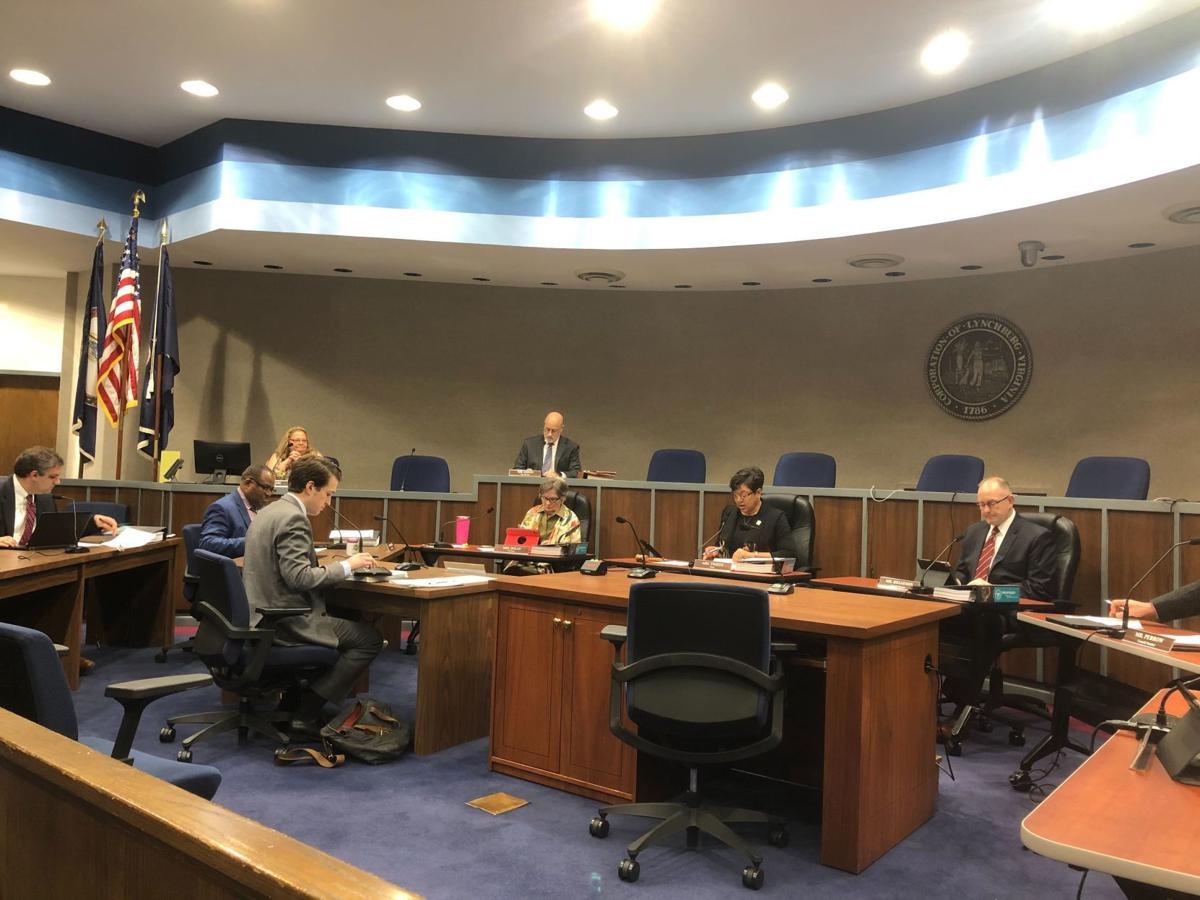 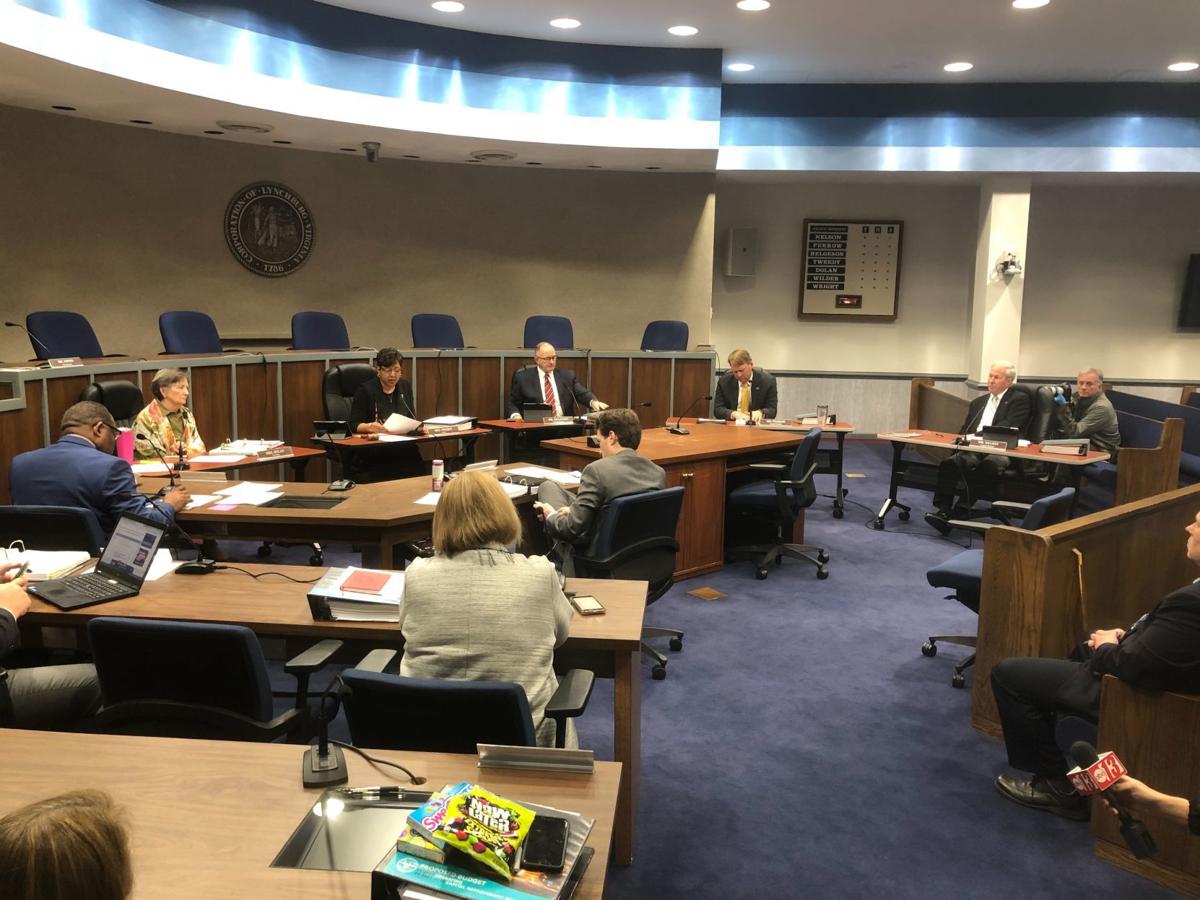 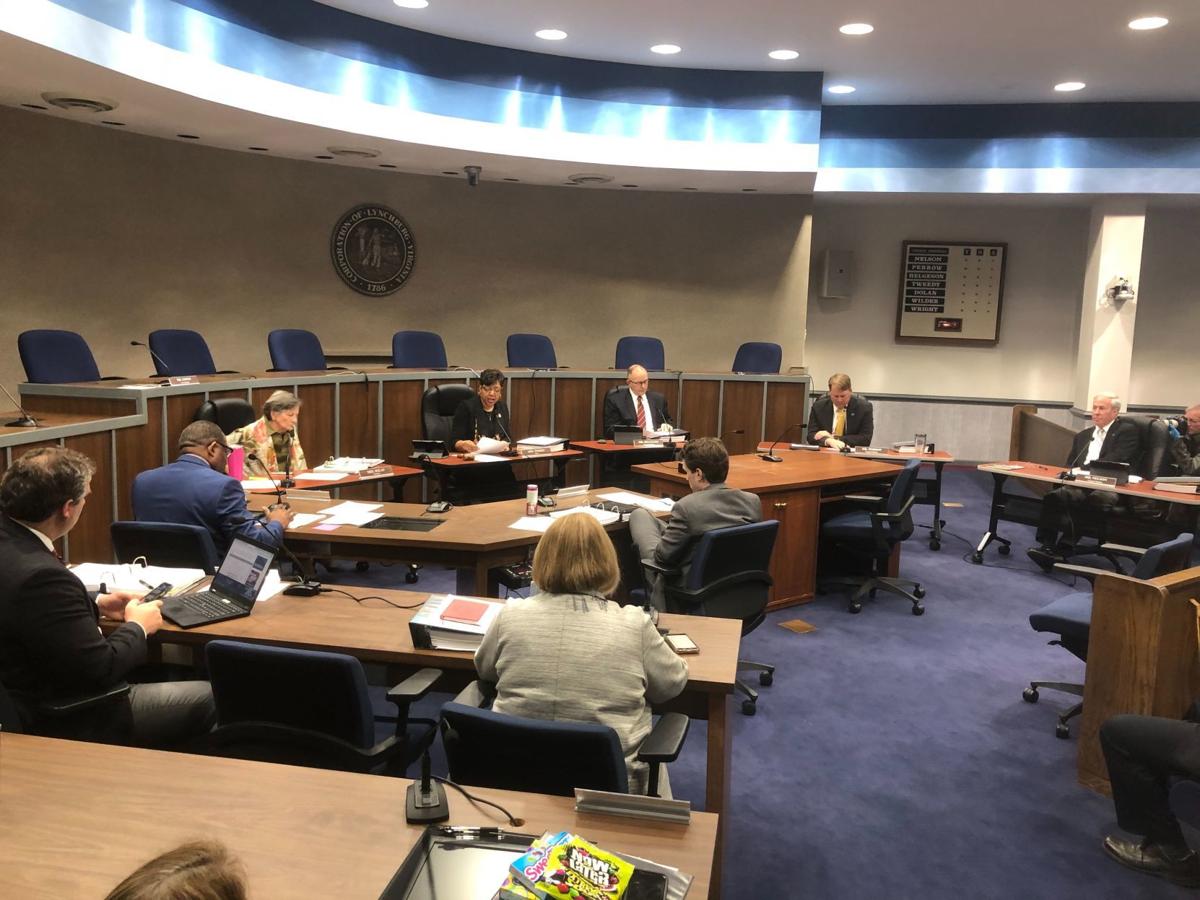 Members of the Lynchburg City Council sit in chairs in front of their normal meeting positions during a meeting, Tuesday March 24 , 2020, in Lynchburg, Va. Officials in Lynchburg said Tuesday they were fielding complaints and concerns about the hundreds of students that have returned from their spring break to Liberty University, where President Jerry Falwell Jr. has welcomed them back amid the coronavirus pandemic. (AP Photo/Steve Helber)

Members of the Lynchburg City Council sit in chairs in front of their normal meeting positions during a meeting, Tuesday March 24 , 2020, in Lynchburg, Va. Officials in Lynchburg said Tuesday they were fielding complaints and concerns about the hundreds of students that have returned from their spring break to Liberty University, where President Jerry Falwell Jr. has welcomed them back amid the coronavirus pandemic. (AP Photo/Steve Helber)

“I was very surprised and disappointed to later learn of President Falwell’s most recent decision to allow students back on campus,” Tweedy said at a Lynchburg City Council meeting Tuesday. “We are in the midst of a public health crisis. I am concerned for the students, faculty and employees at Liberty University, and I am also very concerned for the residents of the Lynchburg community.”

Liberty began welcoming students back to campus this week, defying a national trend of campus closures aimed at slowing the spread of the disease, known as COVID-19, caused by the novel coronavirus.

Most Liberty classes have moved online in response to the pandemic and students have the option of learning from home. But Falwell has invited all students to spend the rest of the spring semester in campus dorms.

As of Tuesday afternoon about 1,900 students had returned to campus, according to Liberty spokesperson Scott Lamb. Falwell previously said the university is preparing for more than half of the about 8,000 students who normally reside on campus to ultimately make their way back to Lynchburg.

Tweedy’s rare rebuke of Falwell came as public health officials announced the number of local coronavirus cases had increased to five, with three in neighboring Bedford County and one each in Nelson and Amherst counties. Statewide, 290 people have contracted the disease and nine have died.

In her remarks, Tweedy suggested Falwell misled her and City Manager Bonnie Svrcek about the extent of the university’s plan to transition to online learning. She said Falwell informed her last week only a handful of students unable to return home would be permitted to continue living in campus dorms.

“At no time did I or the city manager endorse having the students return to Liberty University’s campus or any of the other college or university campuses in our community. In fact, it is quite the opposite,” Tweedy said.

Tweedy was not the only public official uneasy with Liberty’s decision. On Tuesday, members of Gov. Ralph Northam’s administration directly shared their concerns with Falwell, according to a spokesperson.

“All Virginia colleges and universities have a responsibility to comply with public health directions and protect the safety of their students, faculty, and larger communities. Liberty University is no exception,” Alena Yarmosky, Gov. Ralph Northam’s press secretary, said.

Northam has issued an executive order banning gatherings of more than 10 people, with violations punishable by a Class 1 misdemeanor. The emergency order goes into effect today.

In response to a flood of calls from citizens concerned about activity at Liberty, Dr. Kerry Gateley, the director of the Central Virginia Health District, ordered an inspection of several university facilities. According to a news release from the health district, inspectors did not observe any violations.

“No groups larger than 10 were observed on campus — in the food-service areas or elsewhere — while inspectors reported extensive measures had been taken to remain compliant with the governor’s order,” the health district said in a statement. “While the health department inspectors reported no significant findings at this time, we will continue to monitor campus conditions in the weeks ahead.”

Senior Ezra Parish said Liberty officials have vigorously enforced the 10-person group limit and directives to abide by social distancing guidelines. At the campus library, staffers are making sure students sit at least six feet away from each other.

“Anything where people would be in a confined space really has been closed off,” Parish, who plans to live in an east campus dorm with his two brothers through the end of the semester, said.

Copyright 2020 The Associated Press. All rights reserved. This material may not be published, broadcast, rewritten or redistributed without permission.

Four more deaths related to the coronavirus were reported in Virginia on Wednesday as Gov. Ralph Northam called on Liberty University Presiden…

So the Scaremare is opening much earlier this year -- at a new location and coming soon to an area near you.