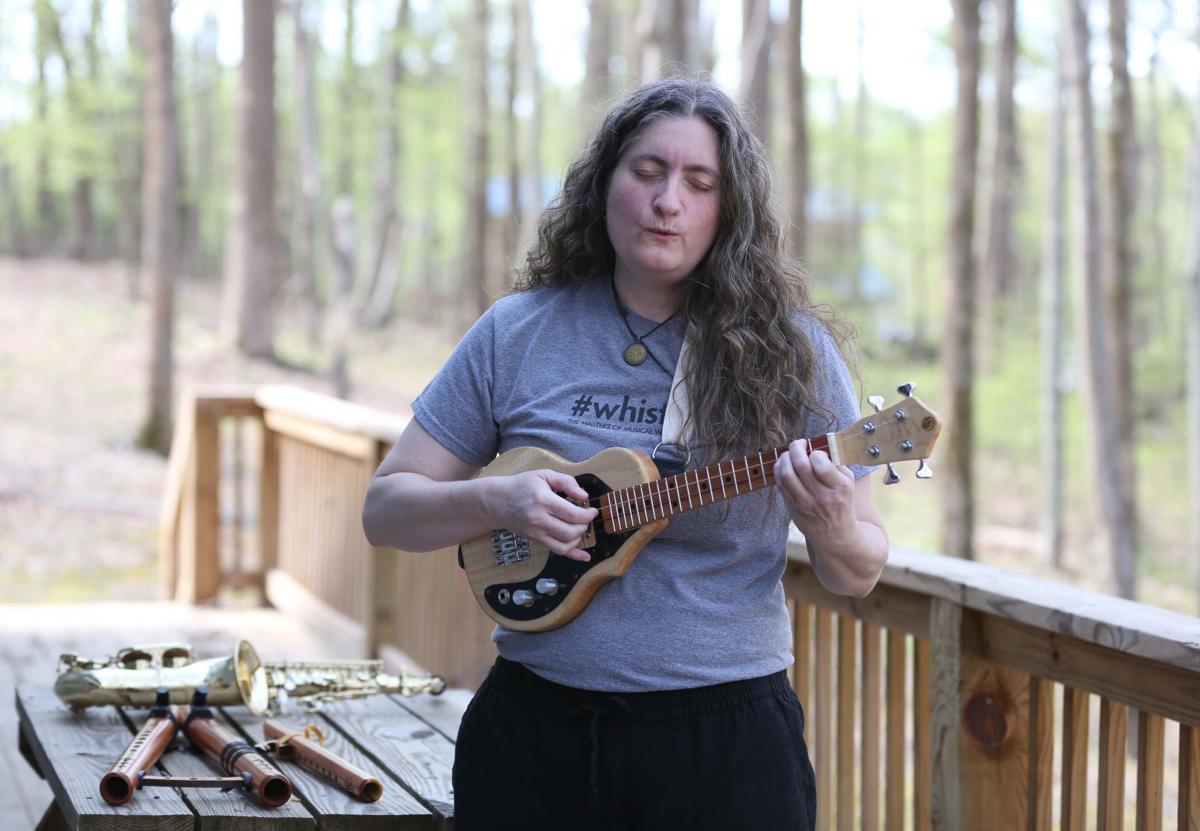 Michele Zehr plays a ukulele and whistles at her home in Roseland on Tuesday, April 7, 2020. 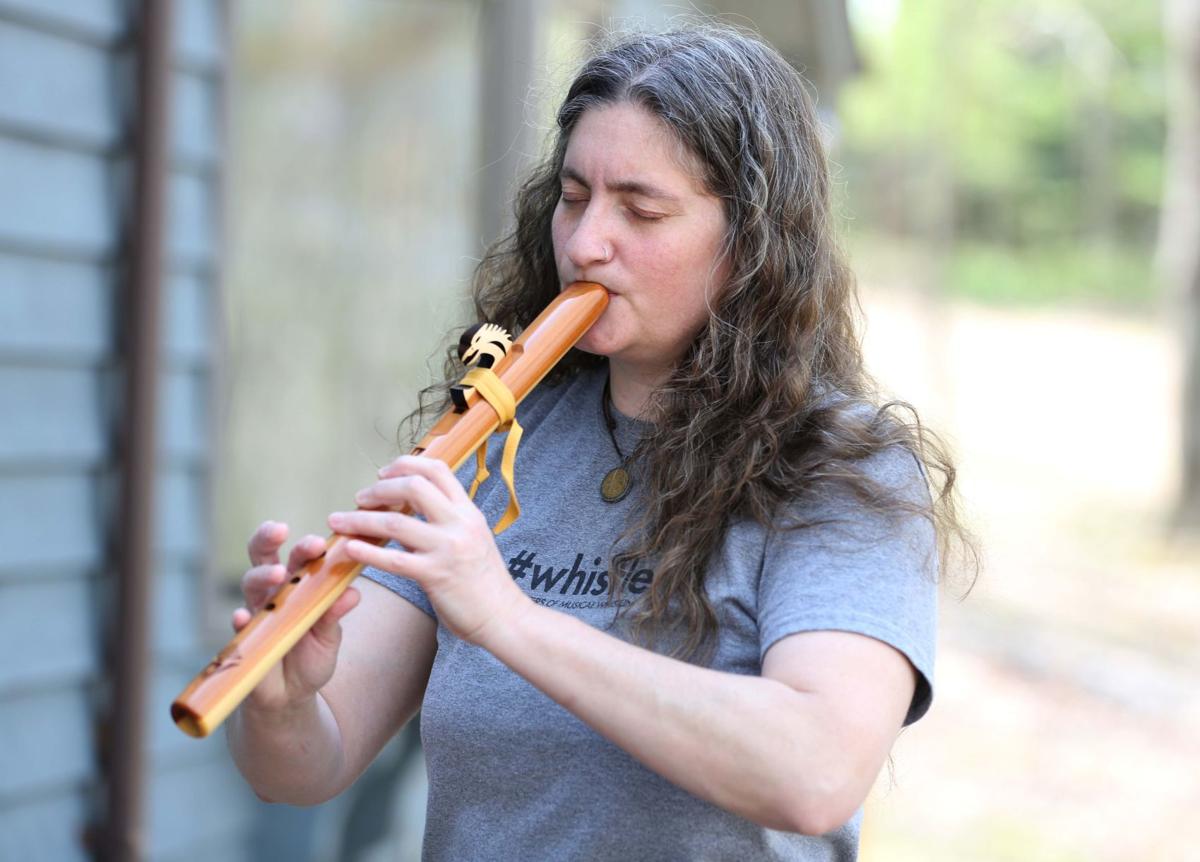 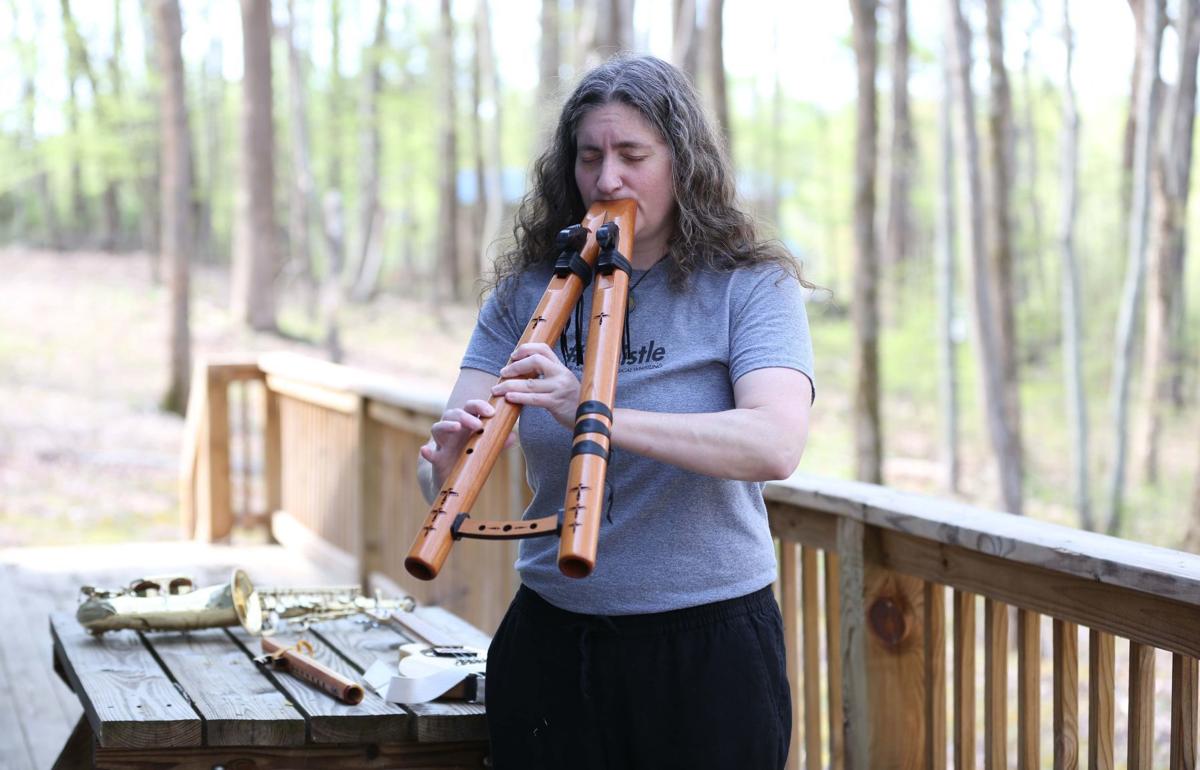 Michele Zehr plays a double bass native-style flute at her home in Roseland on Tuesday, April 7, 2020. 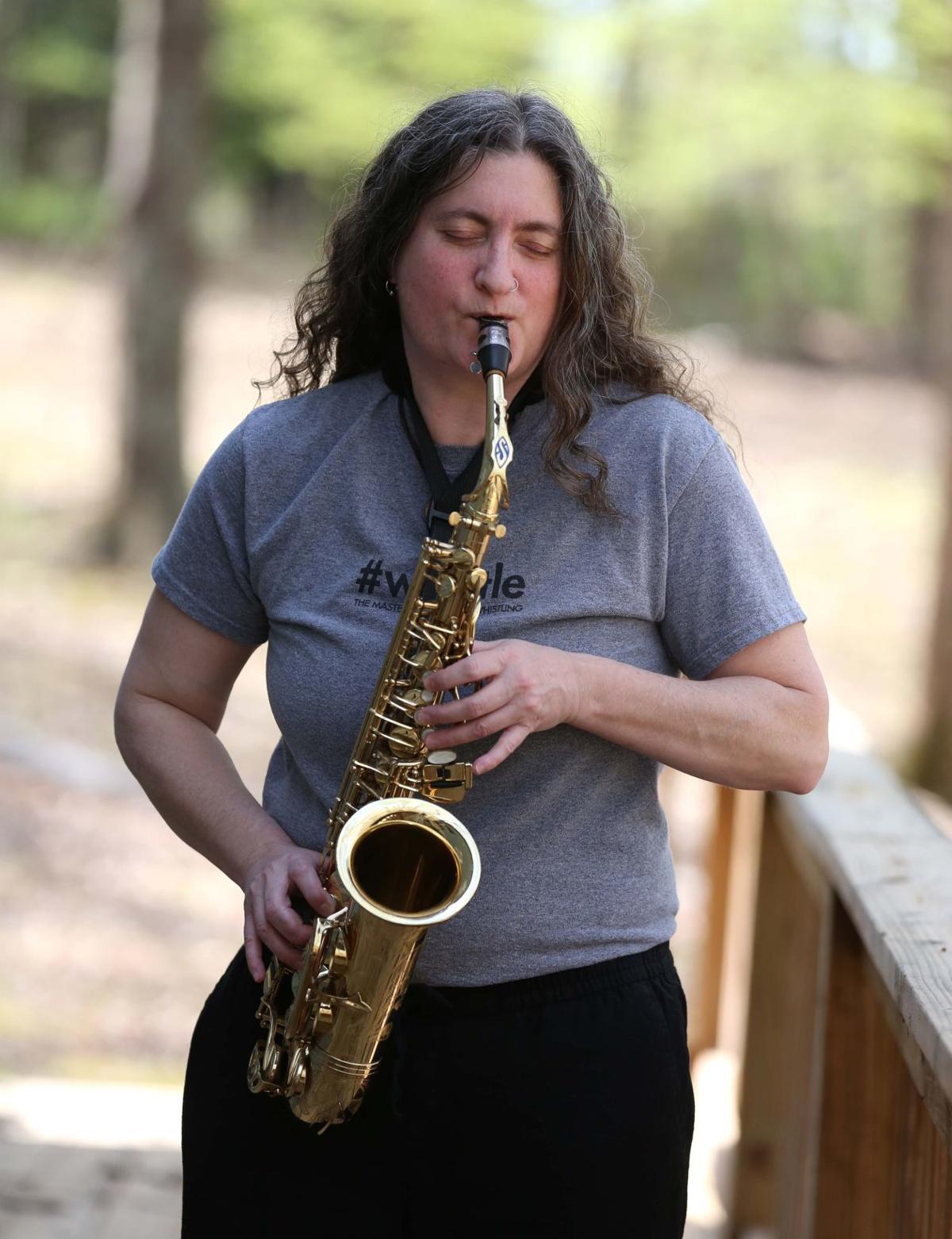 Michele Zehr plays an alto saxophone at her home in Roseland on Tuesday, April 7, 2020. 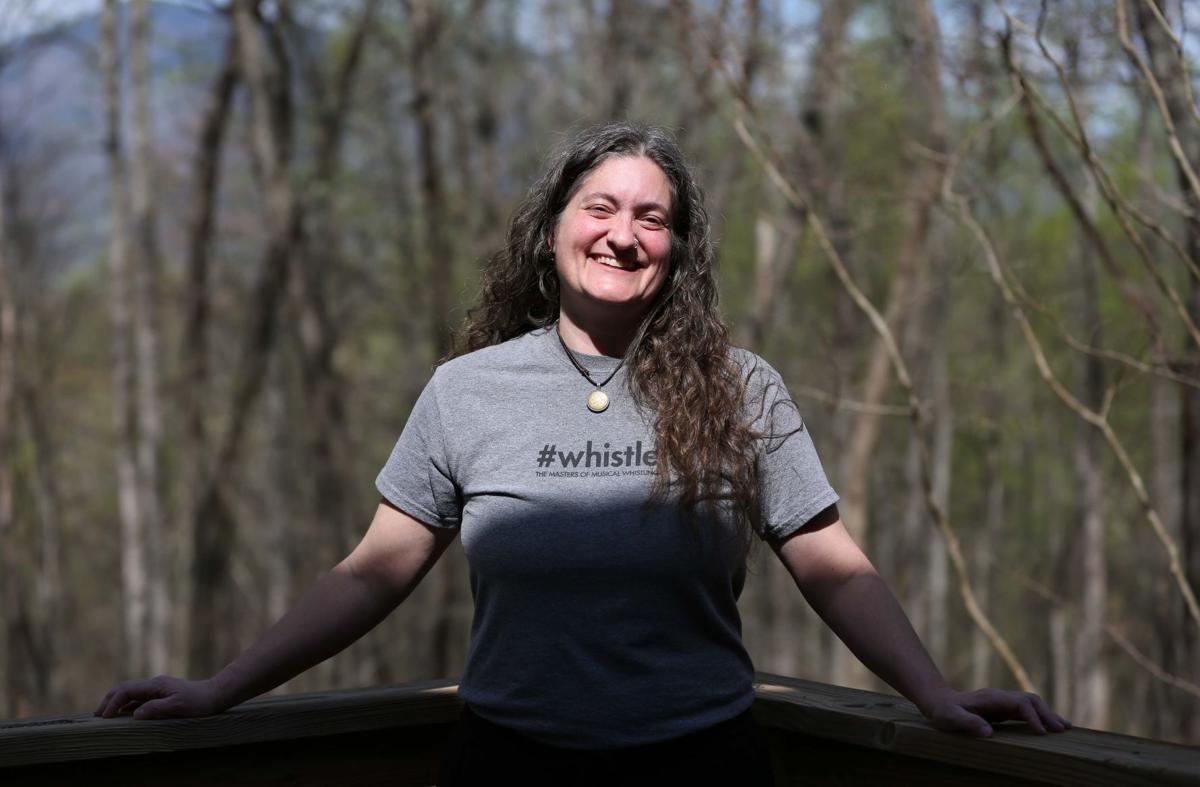 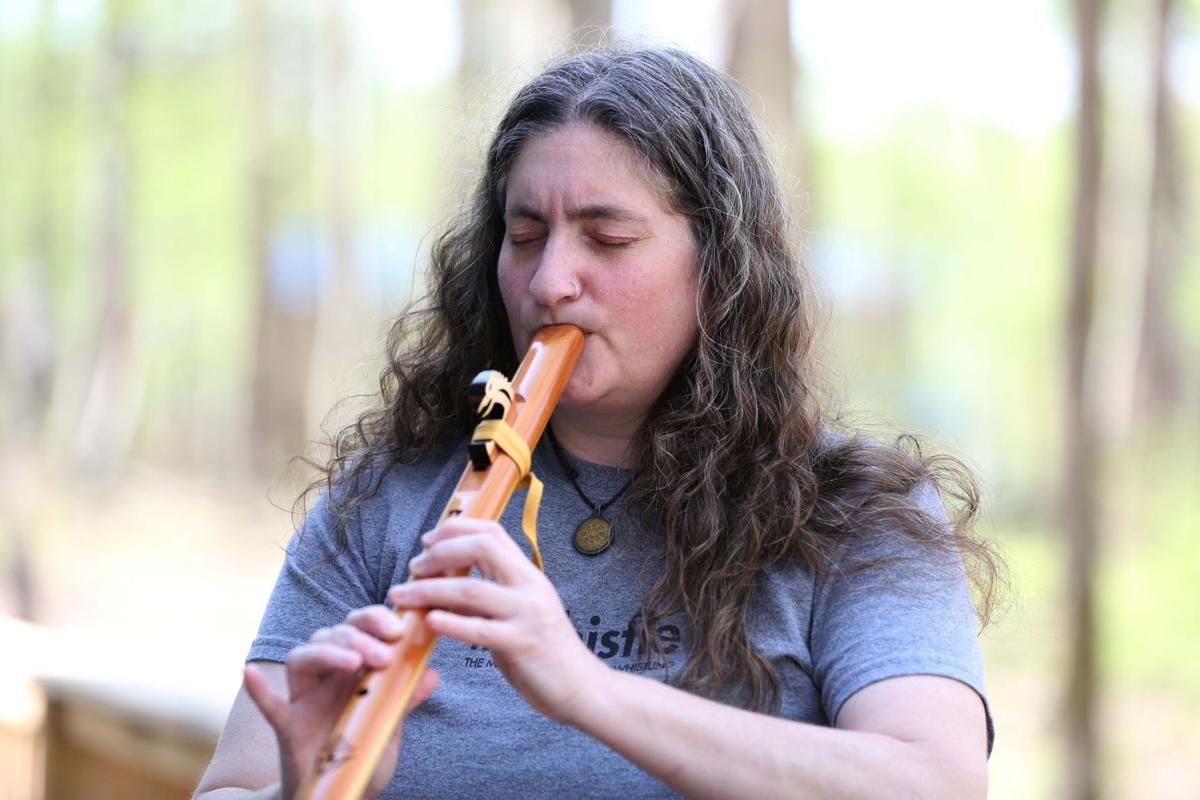 Michele Zehr plays a ukulele and whistles at her home in Roseland on Tuesday, April 7, 2020.

Michele Zehr plays a double bass native-style flute at her home in Roseland on Tuesday, April 7, 2020.

Michele Zehr plays an alto saxophone at her home in Roseland on Tuesday, April 7, 2020.

It might be an understatement to simply say Michele Zehr has an ear for music — as she describes it, music just comes naturally to her.

The Nelson County resident plays about half a dozen instruments and can pick up new ones easily and quickly. But despite that talent, what gets people’s attention most often is her skill as a musical whistler.

“I don’t know how many hours I’ve spent practicing musical instruments my entire life and it’s whistling that people go crazy over,” she said.

Back in August 2019, she competed in the national Masters of Musical Whistling International Festival and Competition. She competed against other world-class whistlers in the hikifuki category, a Japanese term meaning self accompaniment.

She performed “Lullaby of Eternal Sleep,” an original composition consisting of four instruments — a ukulele, a bass drum played with her right foot, a foot tambourine played with her left, and her whistle — all of which she played simultaneously.

The whistlers who sang more technically proficient songs that day took home first-, second-, and third-place trophies; but the soul Zehr poured into her beautifully executed yet simple melody secured her an honorable mention, according to Carole Anne Kaufman, the organizer of the biennial competition in Pasadena, California.

“The entire audience was staring, enraptured in what she was doing. I was completely blown away,” Kaufman said. “That was very easily one of my favorite performances of the weekend.”

Kaufman, a resident of Los Angeles, said there have been three competitions so far and each one has been larger than the last. That weekend alone, Kaufman said she must have heard about 200 different performances.

While Kaufman doesn’t have any judging power when it comes to declaring the winners, she does have the power to recognize certain whistlers in a compilation video of the competition. She said she couldn’t simply let Zehr’s performance go unnoticed, and she decided to include it as her producer’s choice.

Zehr said it was the song she performed for her honorable mention at the competition that started her journey with musical whistling about a year ago. Up to that point, whistling to her was usually nothing more than belting out the occasional tune when doing chores around the house or just to pass the time.

“I’ve whistled my whole life; I remember teaching myself how to whistle when I was a little girl. As far as my capacity to whistle music, I had no idea this was a special skill set,” Zehr said.

In spite of her talent, she isn’t quite sure how she produces the sounds she needs for her songs.

“I will say I was born with a pretty awesome musical ear. I can feel in my body where I need to place my tongue in my mouth to get that pitch. It’s not a super conscious process, it’s just how I’m put together,” Zehr said.

She’s practiced music almost her entire life and has been composing since she was in high school. Zehr also served in the United States Marine Corps for four years. Stationed in Hawaii, she served as a member of the band there and as a marksman instructor.

She is the founder of a Nelson County-based nonprofit called the Center for Earth-Based Healing, which offers help in the form of holistic healing to survivors of domestic and sexual violence, in addition to other odd jobs throughout the years.

“I’ve had a life where I’ve tried a lot of different things, but I wouldn’t settle on something that didn’t set my life on fire,” Zehr said.

However, the nonprofit, which was founded in 2015, was turned down for funding when it came time to reapply last year. Right now, Zehr is pushing pause to reevaluate what can be done differently.

Zehr also has spent a couple of years as a percussionist with the Nelson County Community Orchestra and was set to accompany the orchestra with a whistling rendition of “Ave Maria,” composed by Franz Schubert, and “Vocalise,” composed by Sergei Rachmaninoff, in March; but the event was canceled because of growing concerns over COVID-19.

Zehr attributes her musical talents to her upbringing. She said her parents gave her an environment to pursue music and creative projects growing up, and her father in particular helped her hone her musical prowess.

She said her father taught her everything he knew and just like her, had a natural ear for music. Their shared passion for music encouraged her to elevate her technique.

“... [I]t just was something in my family they supported from the very beginning,” Zehr said of music. “I’m very grateful they supported that creative outlook.”

Still, her relationship with music has had its ups and downs.

After her time in the military, she couldn’t decide how she wanted music to fit into her life and took a break from it for about 14 years.

“At that point I didn’t know where music was going to fit into my life. I knew I never wanted to teach music in a public school situation; that just wasn’t my jam,” she said.

During those 14 years, she realized music needed to come from the heart. That realization brought music back into her life and eventually led to her discovery of musical whistling.

Last spring, Zehr posted a video of herself whistling on Facebook. She was shocked to see the amount of support her video received. This initial reaction prompted her to begin seriously considering whistling as an instrument and, coincidentally enough, she soon discovered the Masters of Musical Whistling competition.

Alex Amorin, who has known Zehr for about six years and served on the board for Center for Earth-Based Healing, was one of the people who encouraged Zehr to pursue whistling about a year ago. Amorin also encouraged Zehr to travel to California to compete in the competition in August.

“I think it’s going to be really neat to see where whistling takes her. On a million different levels it’s just a really cool thing to be able to do,” Amorin said.

Zehr is unsure of what shape her composing will take in the future, but she is optimistic whistling will continue to be a part of it.

She recently created a YouTube channel and plans to post more videos along with other original compositions.

“I am completely open to include [whistling] as a legitimate instrument in my composing. I just don’t know where that path would lead me,” Zehr said.