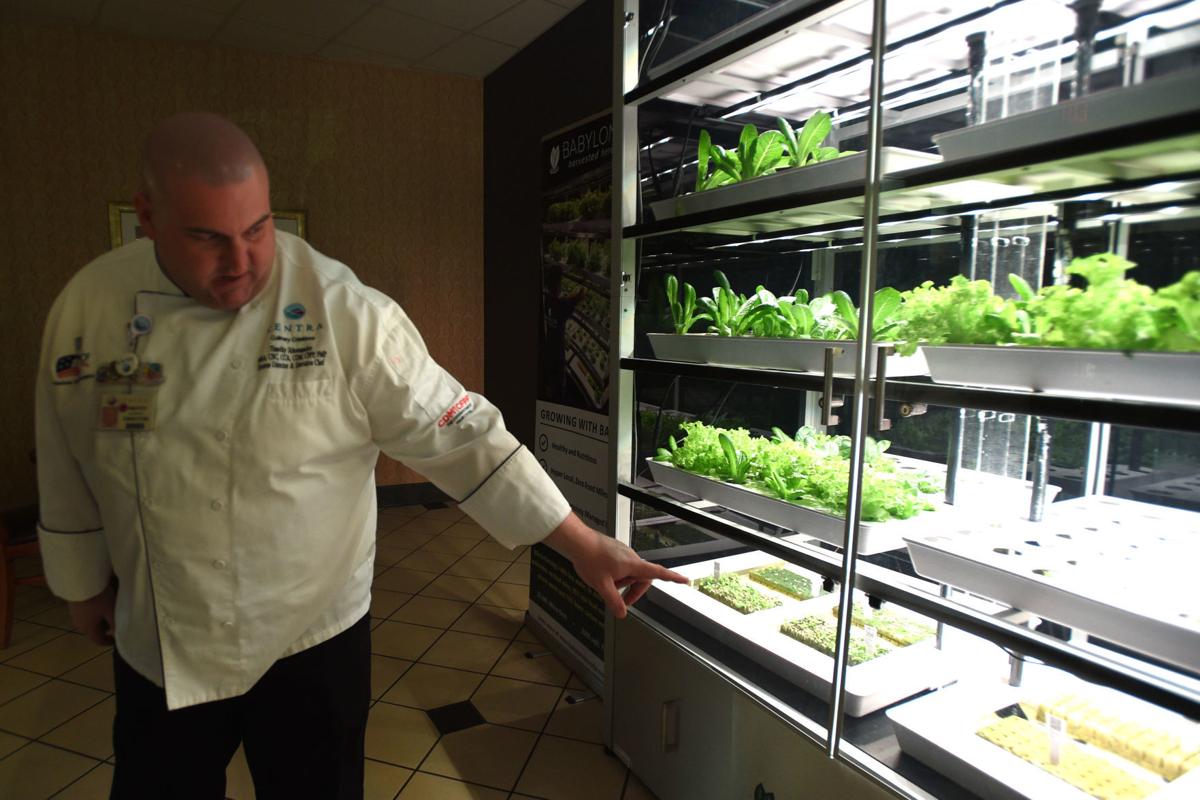 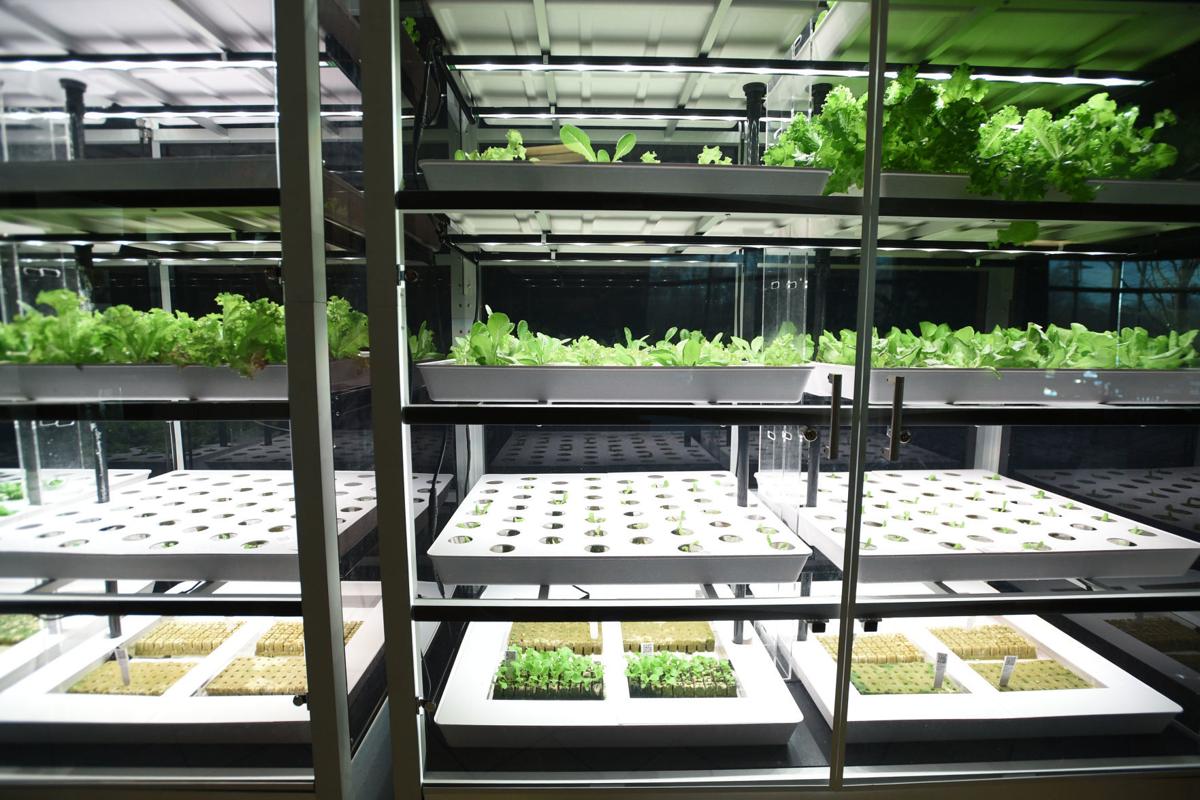 A hydroponic garden at Centra Lynchburg General Hospital in Lynchburg on December 19, 2019. 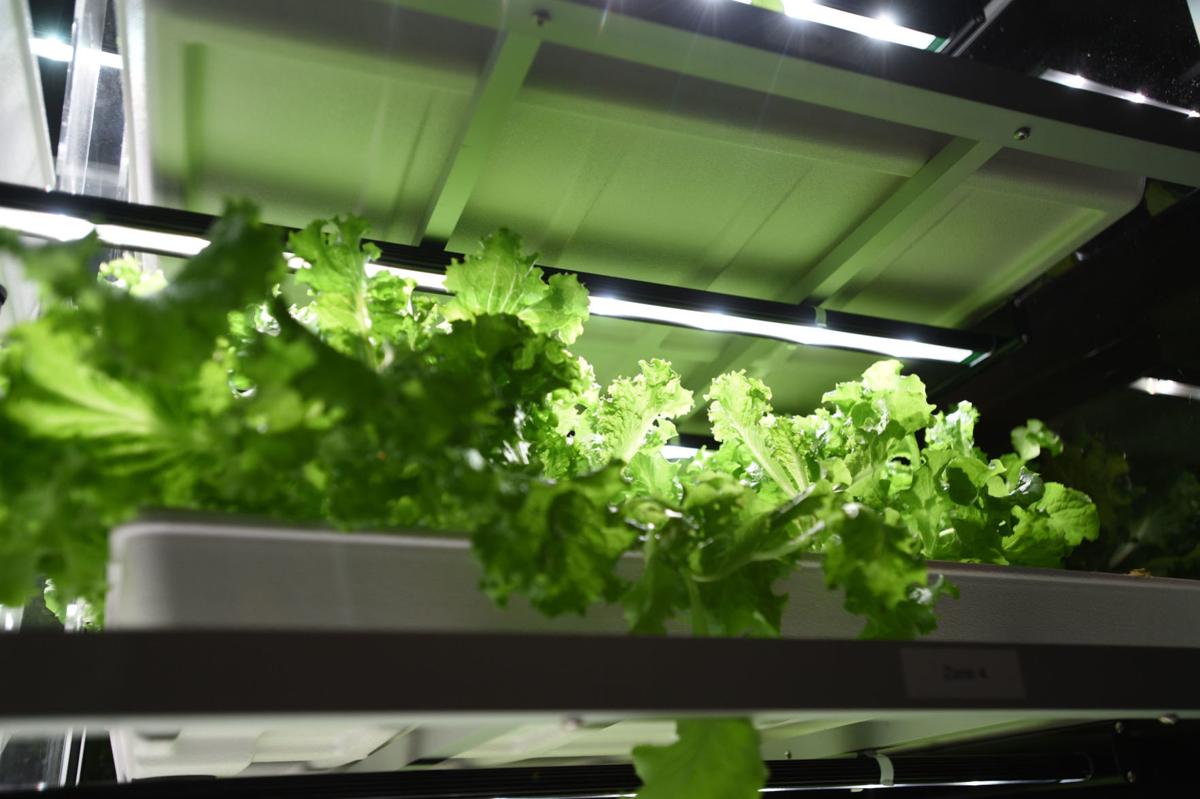 Green leaf lettuce in a hydroponic garden at Centra Lynchburg General Hospital in Lynchburg on December 19, 2019.

A hydroponic garden at Centra Lynchburg General Hospital in Lynchburg on December 19, 2019.

Green leaf lettuce in a hydroponic garden at Centra Lynchburg General Hospital in Lynchburg on December 19, 2019.

Tim Schoonmaker — director and executive chef for Centra Nutrition Services — has been having a lot of fun with his new smartphone app for the past few weeks.

Through his new app, Schoonmaker can monitor the progress and harvest times of his own crops of lettuce — which include red butter, spring mix and romaine varieties — growing in hydroponic “micro farms” inside Lynchburg General Hospital’s cafeteria.

“I just got an alert today telling [me] a batch was ready for harvest,” Schoonmaker said Dec. 20. “We installed this system a few weeks ago and already we are getting produce.”

By combining innovation, sustainability and nutrition, the hospital now is able to grow some of its own produce year-round with the state-of-the-art farming systems.

“It’s not enough right now to sustain what we need every day,” Schoonmaker said. “However, it’s a good start toward our long-term goal of sustainability, which is something we are aiming for.”

In addition to fresh lettuce, the micro farms also are producing their share of conversation in the hospital Schoonmaker said.

“They have been a real centerpiece since the day they were installed,” he said. “So many people have asked about them and many of them still stop and check on the plants’ growth every time they come through here.”

The micro farms are manufactured by Babylon Micro-Farms in Charlottesville. According to Babylon’s Mid-Atlantic Sales Director Scott Wood, Centra currently is the only hospital system in the United States to utilize self-contained farming systems like these.

“As far as I know Centra is the first anywhere to take this step toward sustainability,” Wood said. “We have systems in assisted living facilities but Centra is our pilot program working with a hospital system and it’s going better than we hoped.”

Wood said the produce grown in the micro farms begins in bottom trays where the seeds are placed under a set of lights and sprayed with water and nutrients until they sprout. LED full-spectrum lights in the units mimic the natural ecosystem required for photosynthesis to occur by simulating day and night. Once the seedlings sprout, they are moved up to a pool-like container that floods from the bottom — allowing the roots to soak up water and other nutrients without disturbing the growth up top. After the plants grow big enough, they are placed in the top shelves until they are ready to be harvested.

“It’s such a great system because everything grown is 100% organic and free of contaminants,” Wood said. “There also is no waste because if you don’t need to harvest anything for a couple of days, you just keep the produce in there and let it grow until you are ready.”

Wood said Babylon Micro-Farms currently has sold or leased every available unit the company has manufactured and is producing more for its new clients in 2020.

“Things have been going great,” Wood said. “We are based in Charlottesville, but now are branching out to Lynchburg and now the Richmond area. People are reluctant to try something like this at first because it is so new. However, we have a lot of customers that started out with one unit and called us within a few weeks placing orders for more because they immediately could taste the difference.”

Wood, who previously worked for a produce distributing company, said traditionally grown produce “can’t even compare” to plants grown in a hydroponic system.

“Lettuce this time of year is grown in California and has to be shipped to the East Coast,” Wood said. “It loses flavor, texture and nutrients before it gets to market. I thought the company I used to work for had good produce before I came to work for Babylon and tasted what comes out of these systems. I remember thinking that this is what fresh produce is supposed to taste like.”

Schoonmaker said customers at Lynchburg General’s cafeteria agreed after tasting the first tray of lettuce harvested recently and placed on the salad bar.

“All of it was gone in about an hour and a half,” Schoonmaker said. “We got a lot of feedback about how the lettuce had more flavor, was crispier and had a ‘farm fresh’ taste to it. We harvested more on Christmas Day and got similar responses from people so we have made some cards letting people know which produce was grown in our garden here because it has been such a hit.”

The tray of lettuce Schoonmaker harvested last week yielded about 20 pounds of lettuce, which he said would have cost more than $40 to purchase.

“The price for fresh lettuce has gotten ridiculous,” he said. “These micro farms cost us about $600 a month. We have a total of 20 trays, each of which produces about 20 pounds every two weeks or so. When you do the math, this system will easily pay for itself once we get things rolling.”

Wren Roberts, Centra’s managing director of Support Services, said even though the micro farms were installed less than a month ago, they are projected to be economically viable for the health system.

“I have to give Tim all of the credit for bringing up this idea,” Roberts said. “Not only is it a really cool thing to have at the hospital, it benefits Centra nutritionally as well as economically. Initiatives like this help lower costs, which translates into lower health care costs.”

Roberts said Centra is looking at eventually adding an additional unit at Lynchburg General and placing micro farms at the Alan B. Pearson Regional Cancer Center.

“I was really excited to hear that we are the first health system to be doing this,” Roberts said. “I am looking forward to seeing if we can expand on this initiative.”

In addition to the micro farms, Schoonmaker said the hospital will continue to utilize the herb gardens at Lynchburg General and the large garden at Virginia Baptist Hospital.

“We will still work our outdoor gardens,” Schoonmaker said. “However, that usually runs from May to September so I’m excited that we can still grow at least some of our produce the rest of the year.”