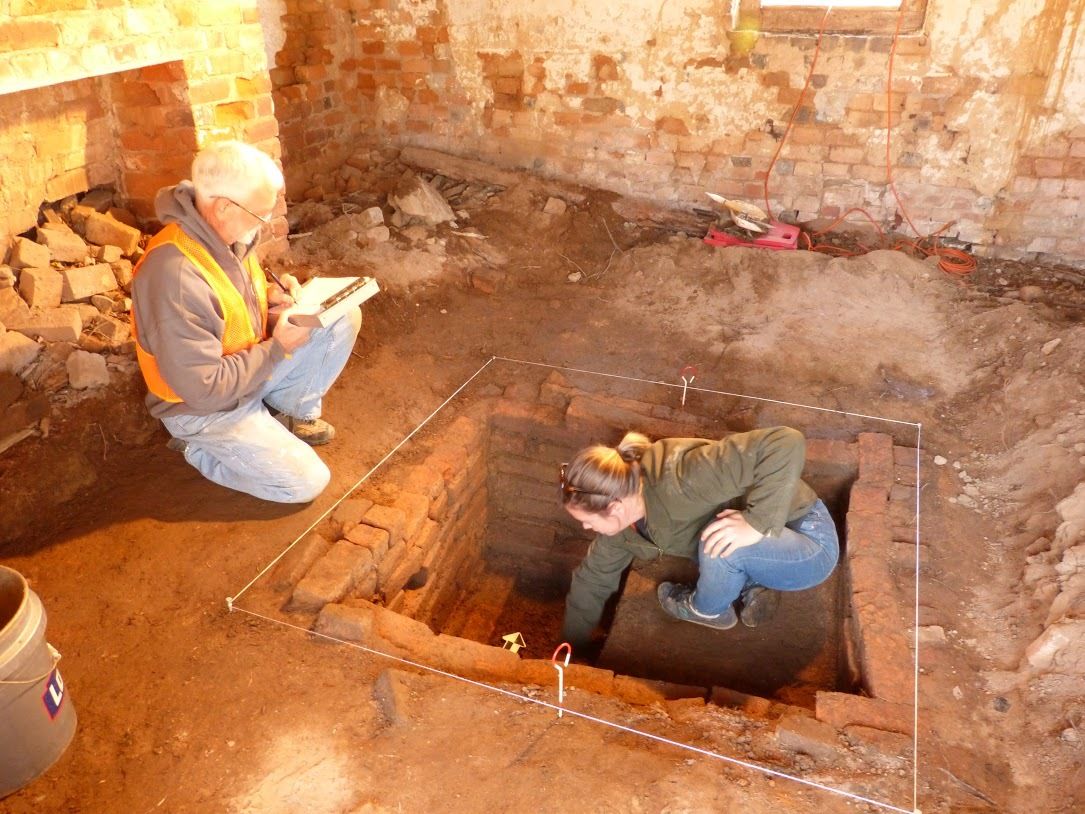 Keith Adams and Lucy Treado excavate the subfloor pit in a room of a slave dwelling at the Oak Hill Plantation in Danville last fall. Submitted 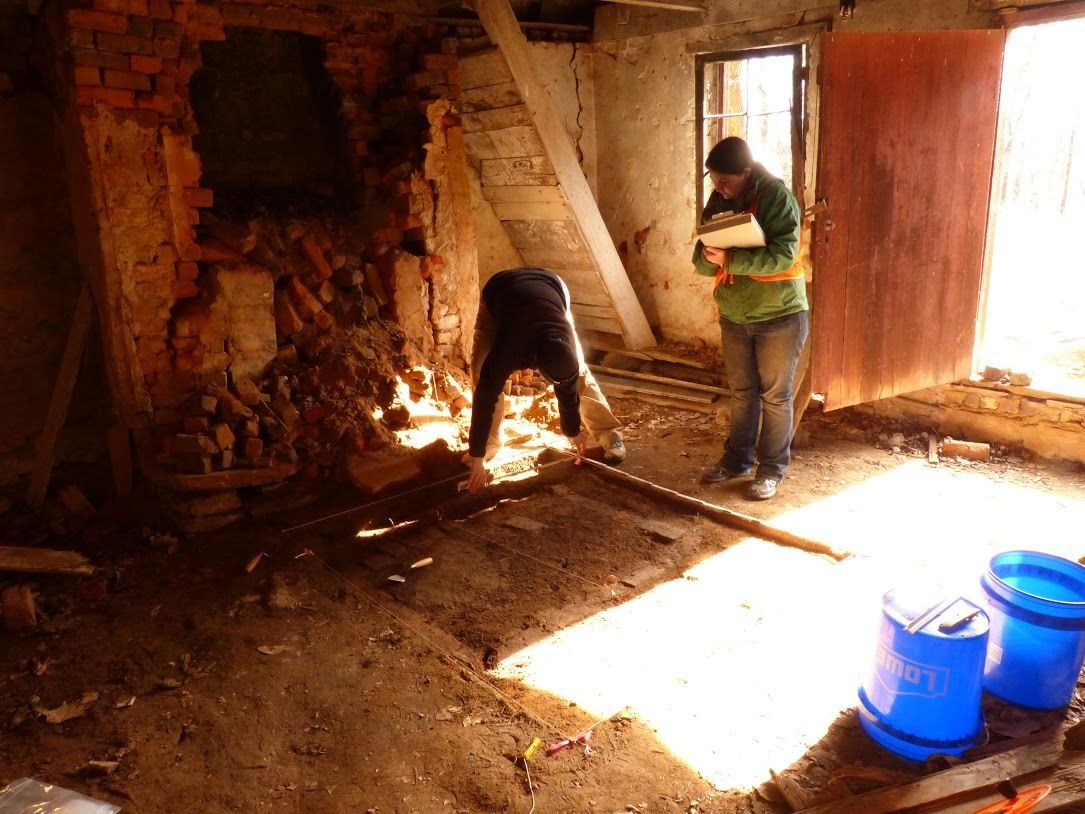 H&P field technicians Crytal Collins (left) and Emily Tomlin (right) make a measured drawing of the top of the subfloor pit discovered in a room of a slave dwelling at Oak Hill Plantation in Danville last fall. Submitted 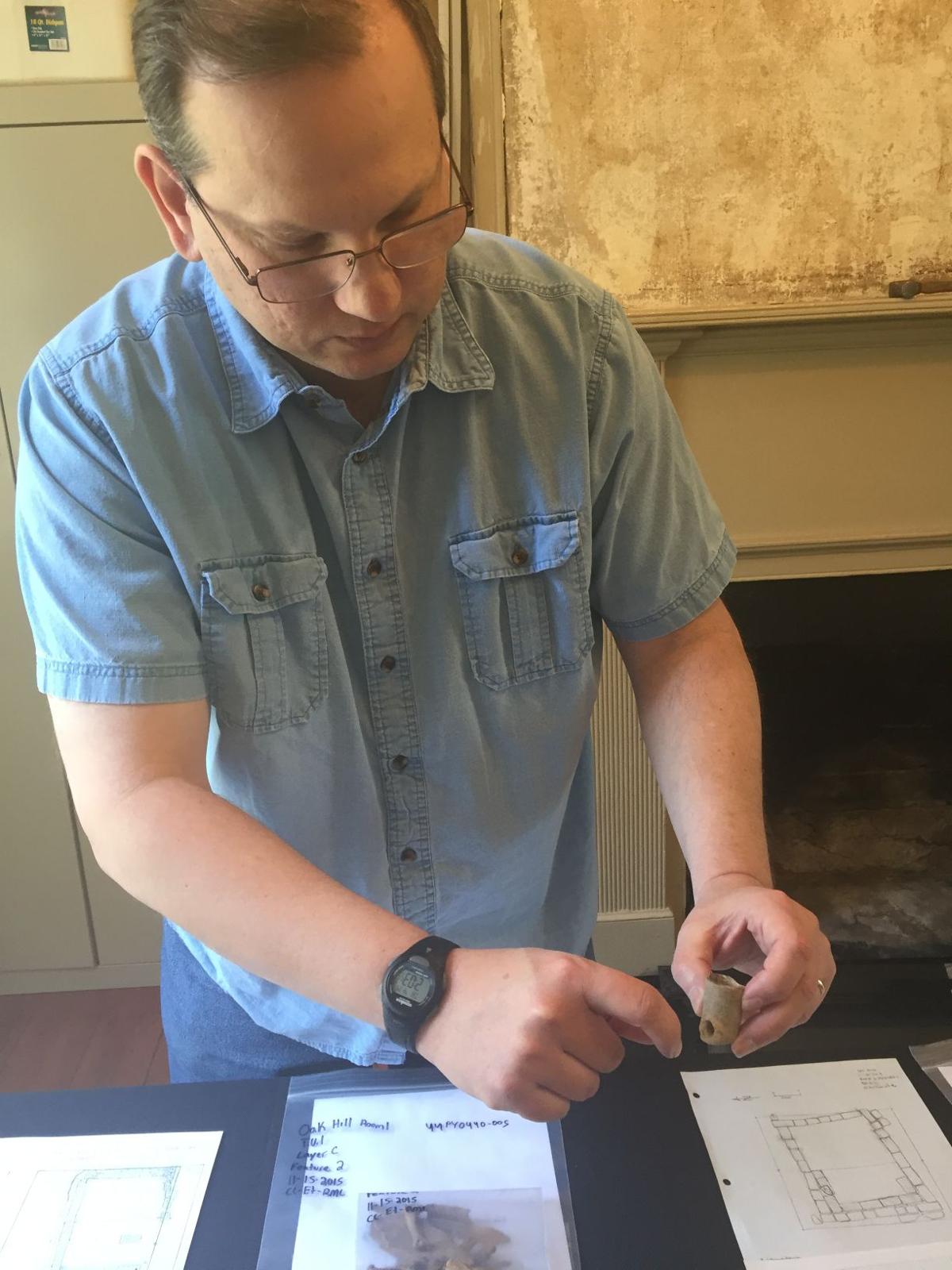 Keith Adams and Lucy Treado excavate the subfloor pit in a room of a slave dwelling at the Oak Hill Plantation in Danville last fall. Submitted

H&P field technicians Crytal Collins (left) and Emily Tomlin (right) make a measured drawing of the top of the subfloor pit discovered in a room of a slave dwelling at Oak Hill Plantation in Danville last fall. Submitted

What may have been an act of defiance by slaves would become an archeological saving grace years later.

Several items from an archeological dig at Oak Hill Plantation in Danville now sit in a laboratory at Historic Sandusky. Lynchburg engineering and land surveying firm Hurt & Proffitt was awarded a contract last year by the Virginia Department of Historic Resources to perform archeological work at the plantation, deemed a “threatened site” following a treasure hunt conducted as part of the Discovery Channel’s Rebel Gold series.

The Rebel Gold program, featuring Oak Hill Plantation, aired last year. In it, a group of treasure hunters was seeking in various spots around the plantation a cache of Mexican silver dollars—a part of the treasury of the Confederacy whose fate has been a subject of speculation through the ensuing years. Some believe the coins are buried in Danville, the last Confederate capital.

Oak Hill Plantation belonged to Samuel Hairston, who may have been the wealthiest person in Virginia around the time of the Civil War and whose holdings included land and thousands of slaves across multiple states.

According to the Danville Register & Bee, the treasure hunters were given permission to be on the property by members of the Hairston family. State archeologists, however, were appalled by methods used during the program, such as the use of a backhoe around the site of an icehouse.

“There was a very slim thread or connection between this plantation and that whole story,” said Randy Lichtenberger, Hurt & Proffitt director of cultural resources.

Nate Starck, listed as a supervising producer for the Rebel Gold series on the Internet Movie Database at imdb.com, declined to comment when reached by the Danville Register & Bee. Alyssa Sales, senior publicist for Discovery Communications, also declined to comment.

According to Lichtenberger, a major difference between treasure hunters and work performed by archeologists is artifacts recovered by archeologists carefully are recorded with information such as the type of object found and the object’s placement within a three-dimensional grid, which allows analysis of the artifacts in relation to others at the site.

The Danville Register & Bee reported the treasure hunters donated some items found at Oak Hill to a Danville museum and a historical society. Items sent to the Pittsylvania Historical Society last spring include buttons, coins, thimbles and beads, which, for the most part, cannot be attributed to any room or feature at the site, according to Hurt & Proffitt’s proposal to the Virginia Department of Historic Resources.

“If it’s all just mixed together, it becomes meaningless in terms of archeology,” said Keith Adams, Hurt & Proffitt director of archeological materials laboratory. “They become curios, essentially, or treasures rather than artifacts.”

A four-member team from Hurt & Proffitt, with assistance from a small group of volunteers, performed excavations within two rooms of slave dwellings last fall. The brick structure was comprised of four attached one-room dwellings that were built sometime in the mid-1820s. Now in various states of deterioration, each room of the structure possibly held a single family, likely household slaves owing to its proximity to the big house.

Hurt & Proffitt has performed archeological work at other threatened sites in Central Virginia, including Cabellsville, an early Amherst County seat that now lies within Nelson County. At Oak Hill Plantation, the firm was tasked with excavating and documenting the findings within two subfloor pits inside the slave dwellings.

Subfloor pits were common features in dwellings of the enslaved, as well as poor whites, and were places where people stored items such as root crops or personal valuables, Lichtenberger said.

According to Lichtenberger, one of the two subfloor pits was rather unusual, containing a second compartment deep enough to extend below the present-day water table such that it was filling with water as the archeologists were working.

The treasure hunters only disturbed about a foot in depth of that particular pit before losing interest, fortunately leaving as much as two or two-and-a-half feet of the pit undisturbed.

Artifacts from the Oak Hill excavation that now sit in a laboratory in Historic Sandusky offer clues to the lives of the enslaved. Bones and shells give insight to the occupants’ diet: cow, chicken, turtle and fish. Buttons and small beads may have decorated clothing, while pottery fragments, including Chinese porcelain, were possibly secondhand objects passed down from the slaves’ owners.

Other artifacts found within the pits may have served as humble treasures to the dwelling’s enslaved occupants, including a fossilized shark’s tooth and a prehistoric Native American projectile point, possibly found in a field and carried home as a curio.

“We don’t know that for absolutely certain, but it’s probably the most reasonable explanation of how something prehistoric got into a very historic context,” Adams said.

The artifacts from Oak Hill Plantation will be catalogued, and the Virginia Department of Historic Resources will determine a final curation facility for the items.

When speaking of history, it wasn’t slaves who were recording what was happening within plantations, Lichtenberger said.

“What you do have is really biased. When we excavate, we get an unbiased look at history,” he said. “There’s a lot of data there. There’s information on everyday life that you don’t get in records.”