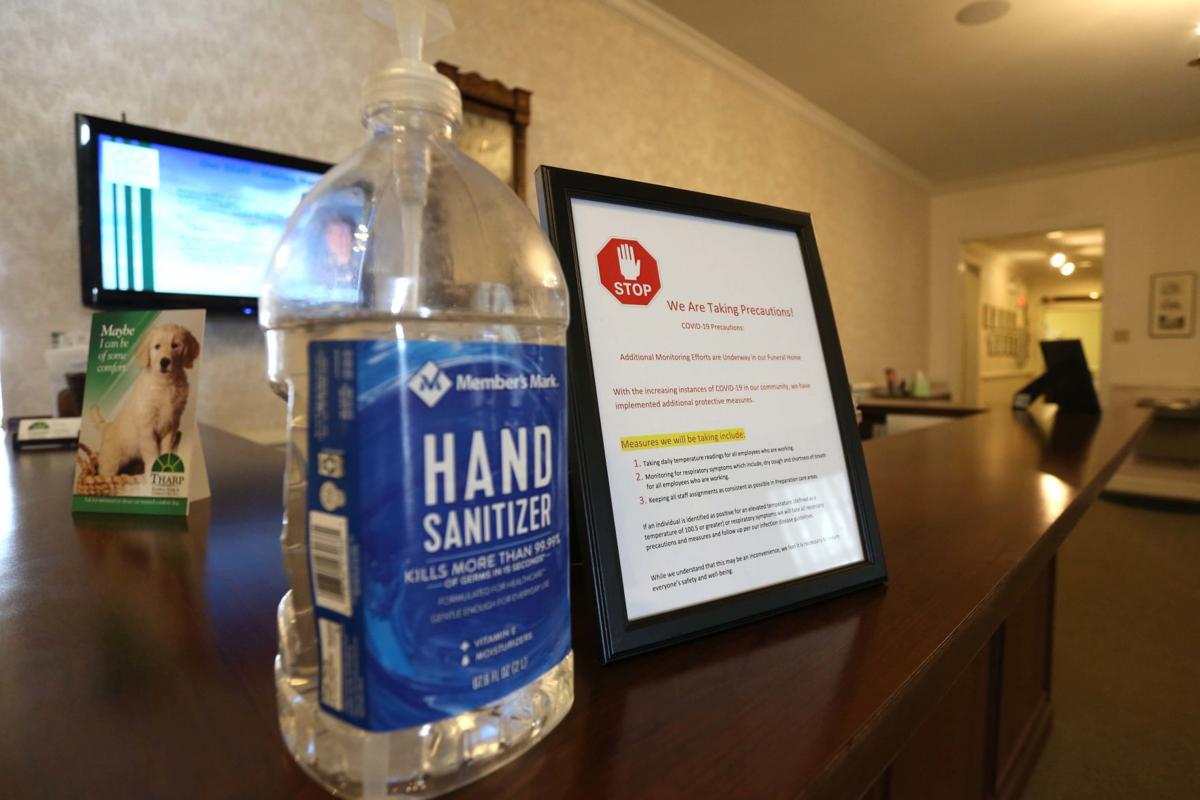 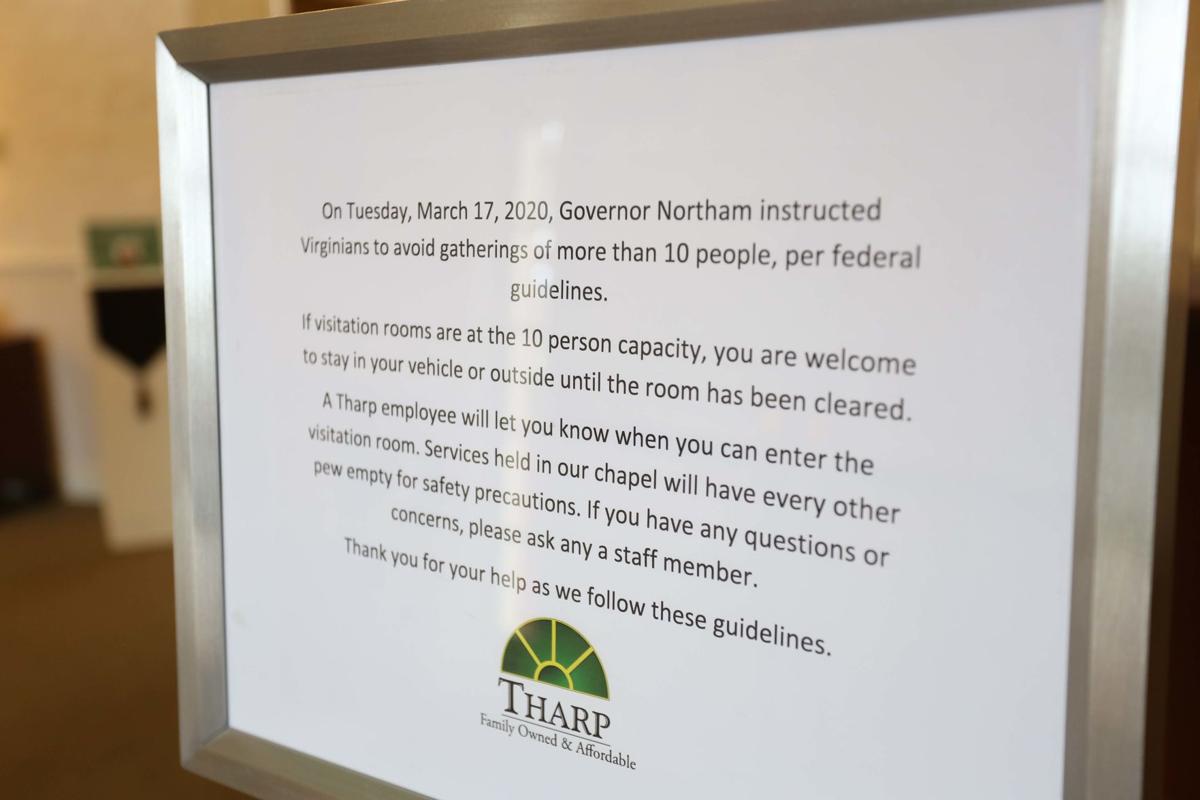 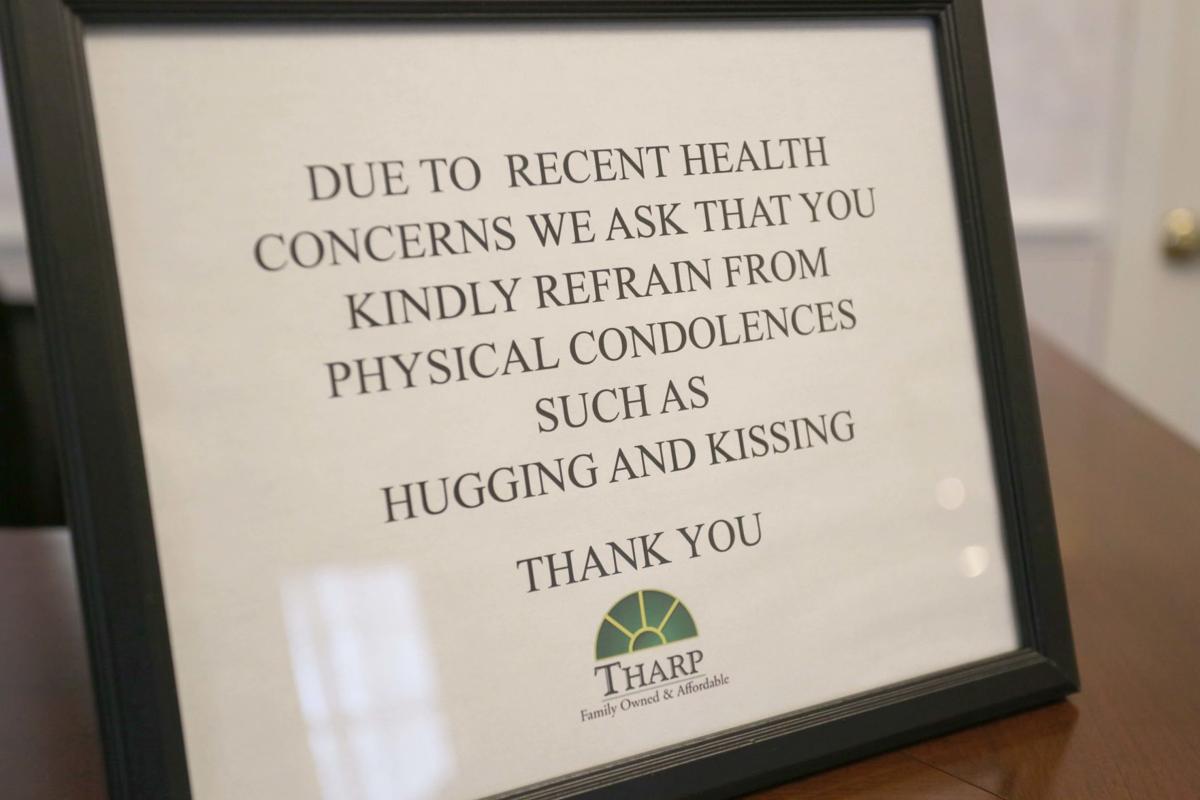 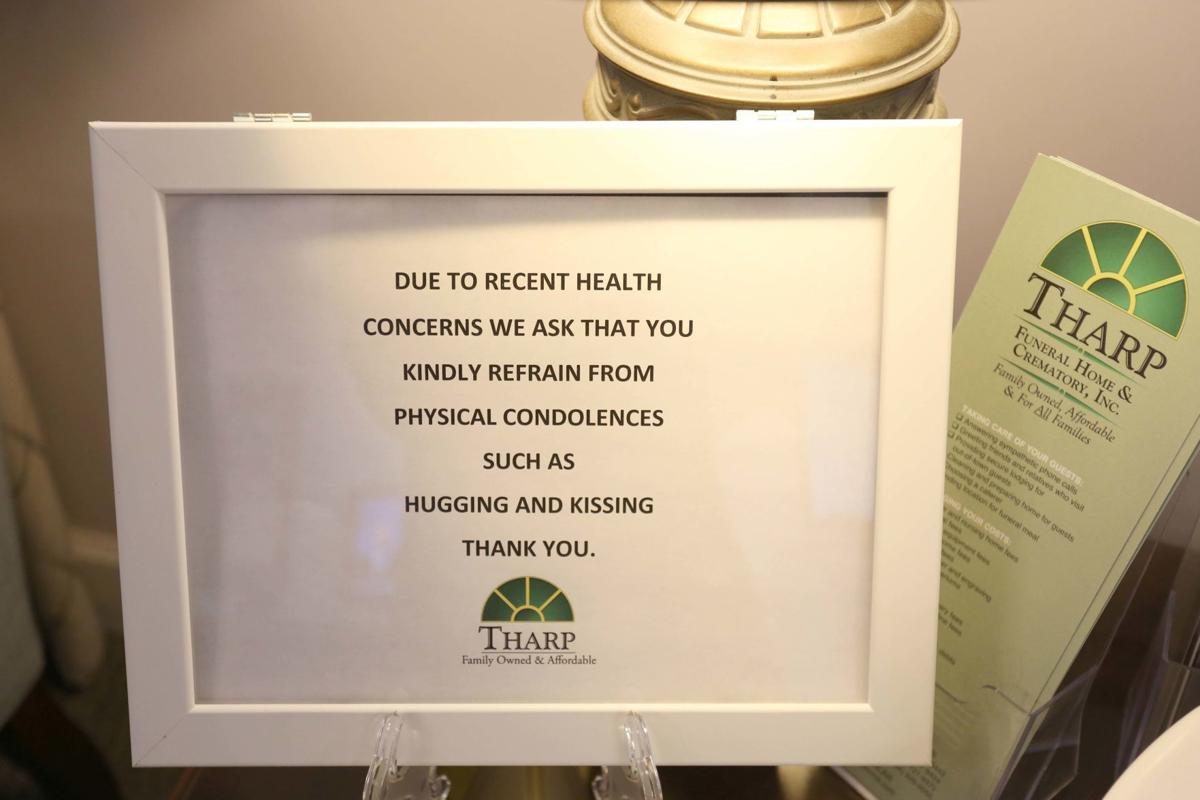 For many, funeral services are an important part of coping with the loss of a loved one. But as COVID-19, the disease caused by the novel coronavirus, continues to spread, local funeral homes are adjusting how they care for families.

The changes are inspired by a need for social distancing — which includes staying at least six feet away from others in a crowd — and other federal and state guidelines intended to slow the spread of the virus.

At Tharp Funeral Home & Crematory, similar to many others, staff members are cleaning between visitors and only allowing 10 guests inside the facility at a time, even during a viewing or memorial service.

Owner Chris Tharp said families do not need to come into the offices at all and all business can be handled over the phone or by video. Even signed documents can be sent digitally.

“We’re explaining to them, if you’ve got a big family, tell one group to come at once, and then have others come in,” he said. “There are no physical condolences of hugging, holding hands or kissing.”

There is signage all over the facility directing groups to enter through one door and out another for a controlled flow of guests as well as separate rooms for small groups to view a funeral from a live video feed. Inside the chapel, guests are guided to sit in every other pew.

During a viewing Thursday, instead of it being held for two hours, it lasted 10 hours to allow people to trickle in throughout the day.

“We want to keep them safe while giving them every opportunity to have healthy grieving and to do rituals,” Tharp said.

At graveside funerals, guests are spread apart by six feet and Tharp provides the pastor or speaker with a public address system.

“We’re trying to come up with creative ways for that immediate family to grieve and celebrate their loved ones. We want to give the families options, which may include holding the memorial at a later date,” Tharp said. “We will abide by the rules but still psychologically, we need to grieve. We can’t wait three months to grieve our spouses.”

The Rev. John Vest, of Peakland United Methodist Church, said his congregation understands gathering in large groups is not possible right now and they will wait to have a memorial service at a later date, especially as cremation becomes more popular and acceptable.

“A funeral is about honoring the deceased, but it’s really about the people still living and expressing and acknowledging their faith and celebrating that life,” he said. “And in their own way, confronting their own mortality.”

Trey Finch, vice president, said being small serves as an advantage — only one family has been served in the last two weeks.

“We’re going to handle it by each family depending on what their feelings are with these things and what their wants and needs are,” he said. “For us, it’s not that different. We usually have one funeral in the building at a time.”

He said staff is doing its best to limit foot traffic within the offices and is encouraging people to pay bills over the phone or online instead of coming inside. The funeral home only has three directors, Finch said, so they cannot afford to get sick or it would compromise the entire business.

Paul Whitten, general manager at Whitten Funeral Home, said staff still is working with families on arranging funerals in the office but should things get worse, the business has technology that could be implemented if arrangements need to be made remotely.

“We’re getting creative,” he said. “Most families so far have been self-policing and are not requesting public visitations, which has been simple.”

However, some families still want a full, traditional funeral, Whitten said, like one being held Saturday.

He said the service only will be held in person for immediate family and will be livestreamed online for anyone else.

“We have a strong desire to work with families to provide and let them celebrate their loved ones lives,” Whitten said. “We’re not recommending having an immediate burial or not having any type of memorial service. We recognize we have to be creative, but through other technologies we can provide other resources so they can celebrate their loved ones life even if it’s from home.”

Tharp said his office has been getting more calls recently about procedures moving forward.

“People are anxious about this, they want to pay their respects but don’t know how, they don’t know the rules,” he said. “We’re the end phase of the health care cycle. We can’t close; we’ve got to stay open.”