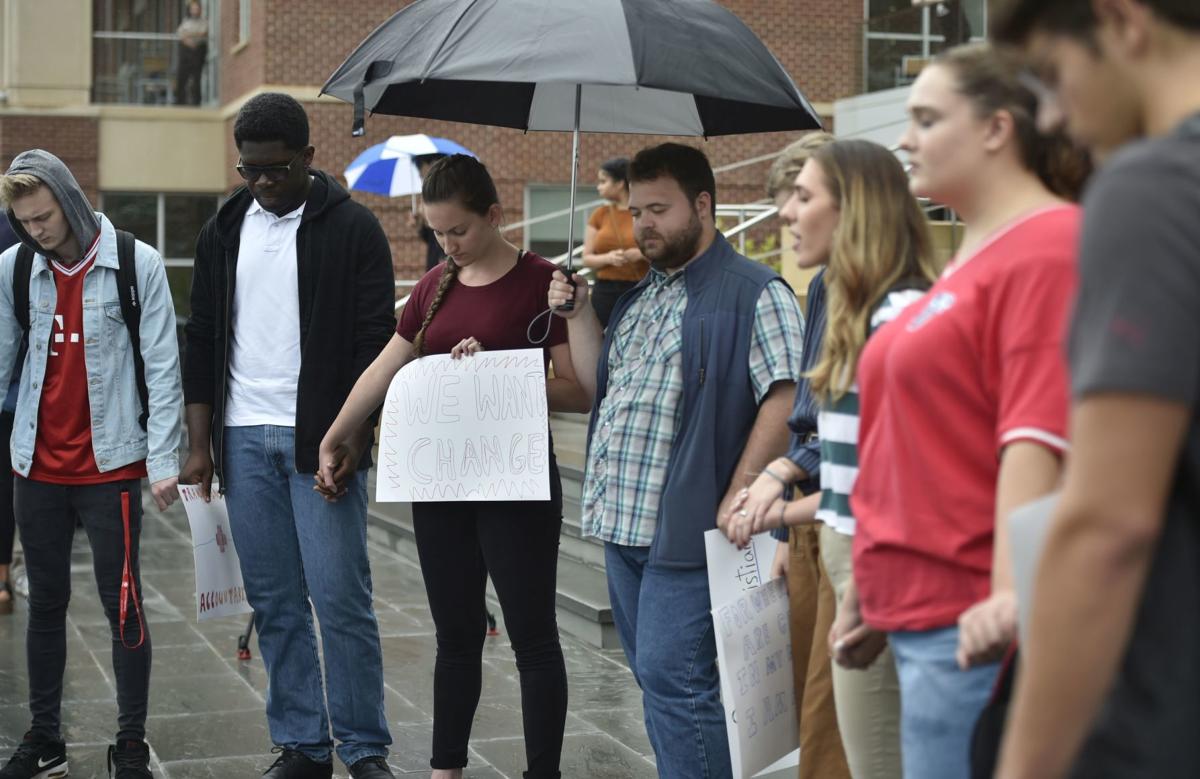 Students pray during a student protest at Liberty University in Lynchburg on Sept. 13, 2019. 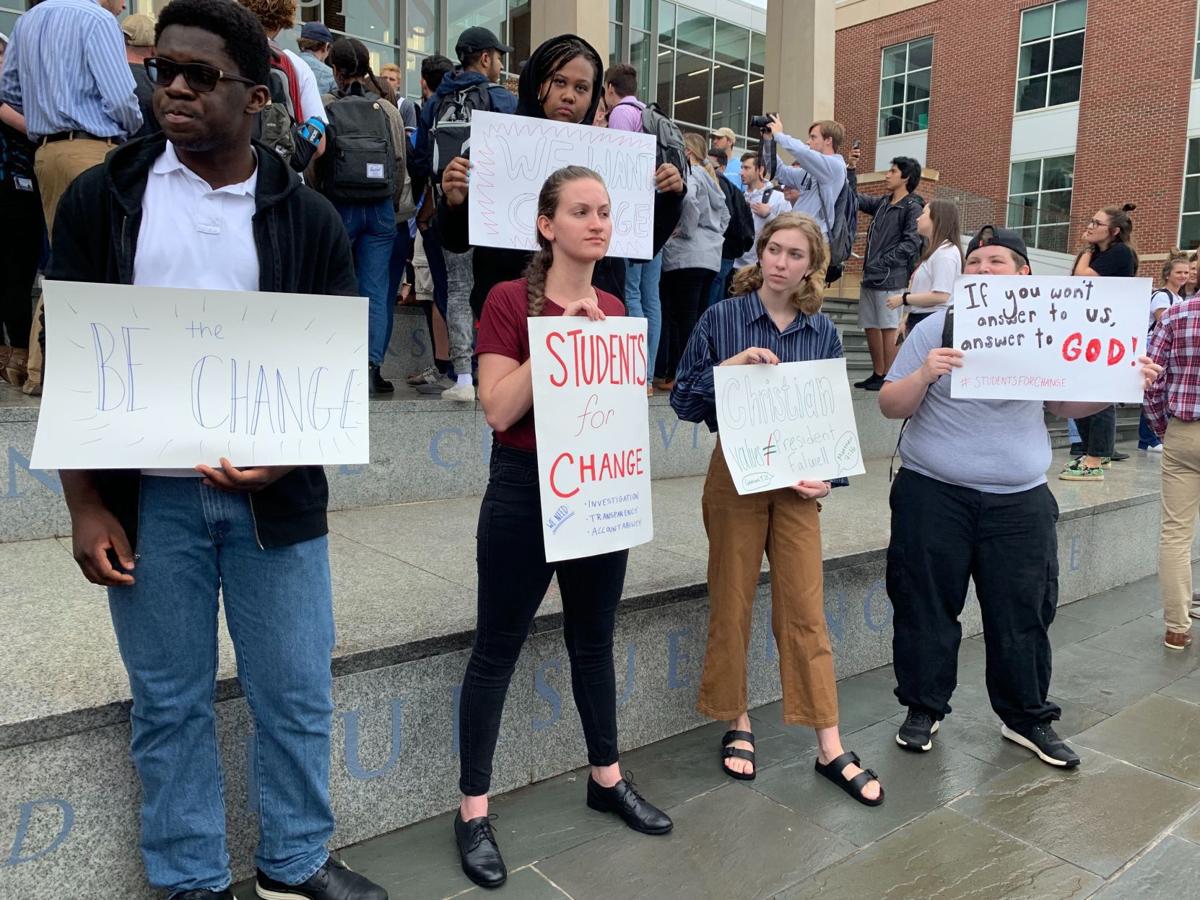 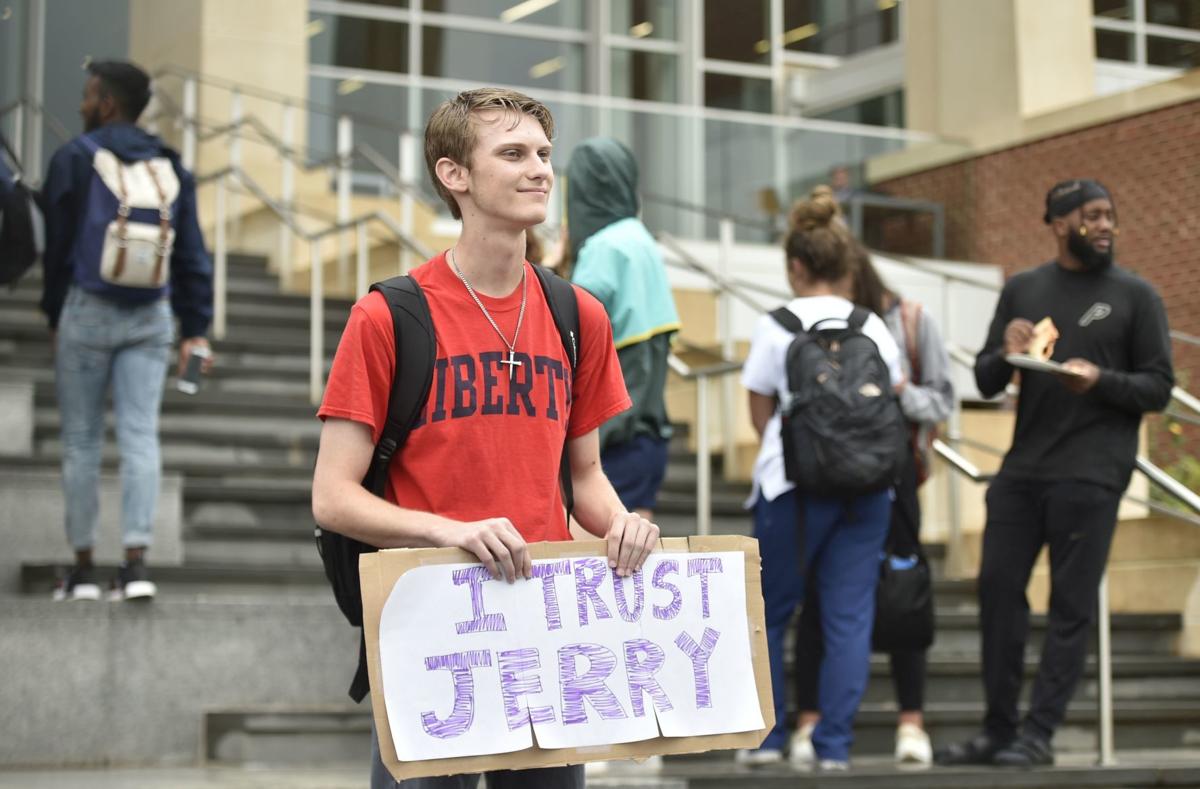 Garridy Hamilton, a freshman in government politics and policy, holds a sign saying "I trust Jerry" during a student protest at Liberty University in Lynchburg on Sept. 13, 2019. 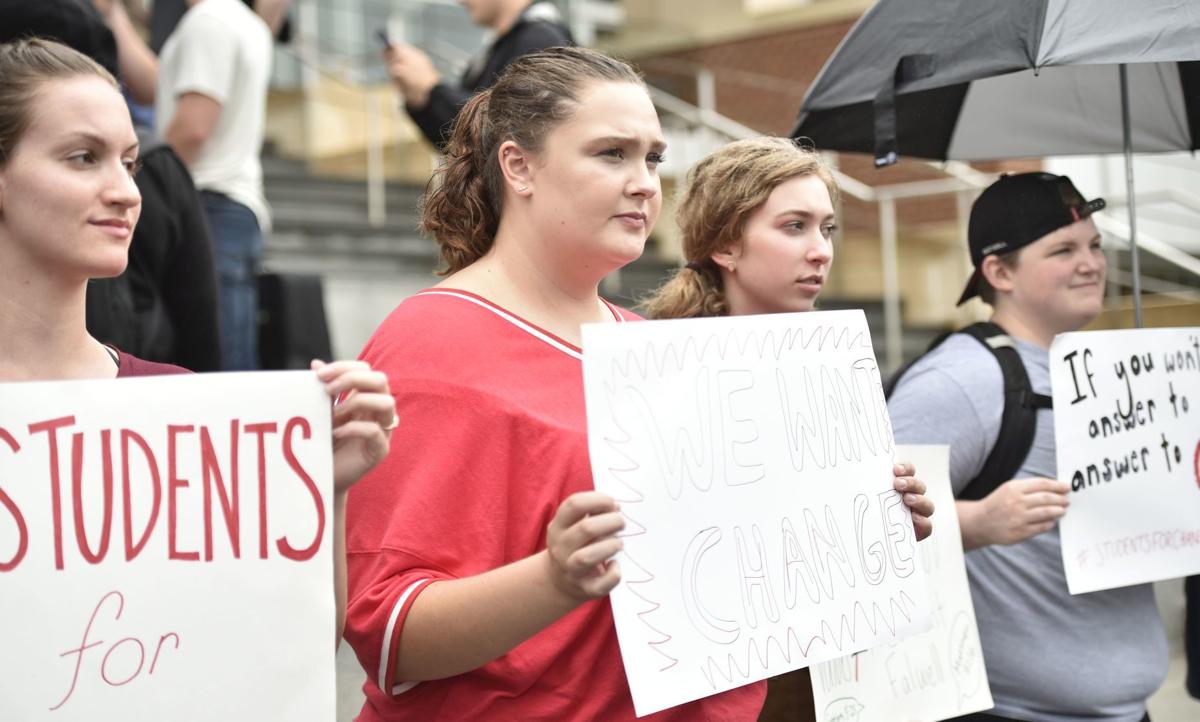 Elizabeth Brooks, a junior in politics and policy, holds a sign with other protesters during a student protest at Liberty University in Lynchburg on Sept. 13, 2019. 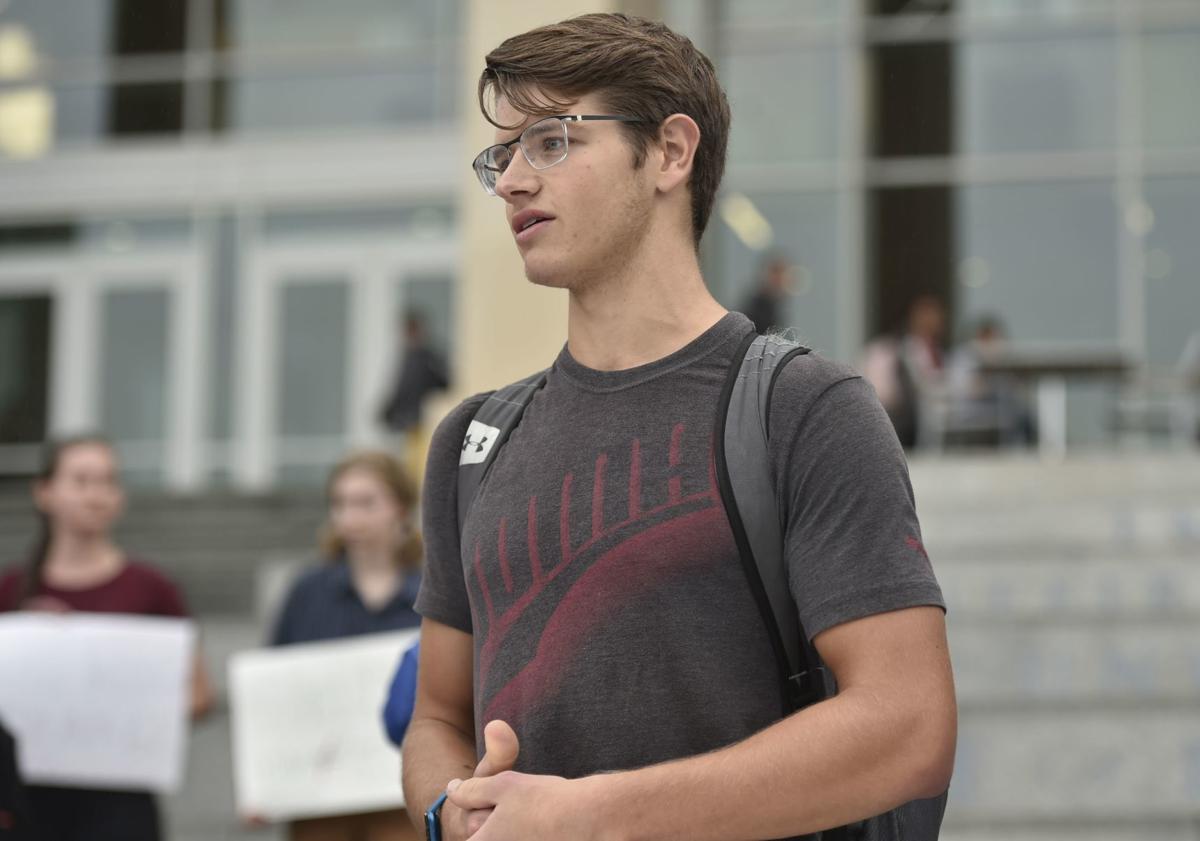 Brad Weisman, a senior in exercise science, talks to other students about Jerry Falwell Jr.'s behavior during a student protest at Liberty University in Lynchburg on Sept. 13, 2019. "I'm afraid to protest here," he said.

Students pray during a student protest at Liberty University in Lynchburg on Sept. 13, 2019.

Garridy Hamilton, a freshman in government politics and policy, holds a sign saying "I trust Jerry" during a student protest at Liberty University in Lynchburg on Sept. 13, 2019.

Elizabeth Brooks, a junior in politics and policy, holds a sign with other protesters during a student protest at Liberty University in Lynchburg on Sept. 13, 2019.

Brad Weisman, a senior in exercise science, talks to other students about Jerry Falwell Jr.'s behavior during a student protest at Liberty University in Lynchburg on Sept. 13, 2019. "I'm afraid to protest here," he said.

In the wake of a series of news reports alleging misconduct by Liberty University President Jerry Falwell Jr., more than two dozen of the university’s more than 10,000 residential students rallied on the steps of the student union Friday and called for a formal investigation into the accusations.

“Jerry Falwell Jr. does not represent Liberty students, and he does not speak for us,” said Brad Weisman, a senior. “His actions are deeply troubling and they are indicative of the fact that he doesn’t hold the same values as the students. He doesn’t hold the same values that his father held when he started this school. And he’s only interested in exploiting a particular group of people — evangelical Christians — for money and power.”

The protest — held in the heart of campus shortly before noon following the twice-weekly convocation — drew hundreds of onlookers and a handful of counterprotesters who offered a spirited but largely civil defense of Falwell.

The controversy erupted this week with the publication of a story in Politico Magazine on Monday, alleging Falwell leveraged the university’s business interest to enrich himself, family members and friends. The story — which carried the headline, “Someone’s gotta tell the freakin’ truth: Jerry Falwell’s aides break their silence” — included internal university emails obtained by Politico and cited more than two dozen unnamed sources described as “current and former high-ranking LU officials and close associates of Falwell’s.”

The outrage was intensified Thursday when Reuters reported Falwell referred in emails to a student as “emotionally imbalanced and physically retarded” and called Richard Hinkley, the chief of the Liberty University Police Department, a “half-wit.”

A majority of the protesters Friday demanded a response from the university about the substance of the allegations but stopped short of calling for Falwell’s resignation.

“We believe in accountability, transparency, and an open, clean investigation,” said Ian Parish, a senior who helped organize the demonstration. “Let the dust settle, let the chips fall where they may and we’ll see where we go from there.”

Through misty weather, the protesters waved signs reading “We want change,” “If you won’t answer to us, answer to God” and “If it’s Christian, it ought to be better” — a common refrain often used by Jerry Falwell Sr.

About half-a-dozen counterprotesters challenged the demonstrators with signs of their own.

Garridy Hamilton, a freshman from Oklahoma, carried a sign with the words “I trust Jerry.”

“I trust Jerry Falwell Jr. because he has built this university. He’s done great things for this college,” Hamilton said. “Even though some people are accusing him of stuff, I believe that until he’s proven guilty of these things he should have our trust as a student body.”

In March, about 30 students protested comments Falwell and his wife, Becki Falwell, publicly made about gender identity during the televised Conservative Political Action Conference satellite event held on Liberty’s campus. The Falwells were discussing their desire to raise their granddaughter as a girl, which several students found to be transphobic.

Throughout the demonstration, which lasted more than an hour, protesters engaged in lengthy discussions with students who defended Falwell. Several students on both sides of the dispute cited scripture in their arguments.

Jeffey Smith, a sophomore from Maryland who said he fully supports Falwell, arrived at the protest with a sign reading “Keep Jerry as President” and asked demonstrators to change his mind. After discussing the issue with Parish, Smith said he agreed Falwell should be kept accountable.

“I didn’t really think about that beforehand,” Smith said. “To be honest, I said ‘change my mind’ and he changed my mind. I was expecting to get yelled at, for having this sign. But it ended up being better than I thought. I had some great conversations. I learned a lot.”

In an interview Thursday, Falwell said he welcomed the protest and he took to Twitter on Friday to commend the civility of the student demonstrators.

“I’m so impressed with how @LibertyU students conducted themselves today at the protest!” Falwell wrote. “The ones who had concerns and the ones who supported me were both respectful and not angry-very Christ-like in their behavior. Our students are an example the world can learn from!”

Elizabeth Brooks, a junior who helped lead the demonstration, said she was floored by the response. She hopes it will be a step toward a more tolerant and respectful atmosphere on campus.

“I have never been more proud to be a Liberty University student than today,” she said.

UPDATE: Liberty University’s accrediting body has had no formal communication with the college since a flurry of recent media reports have all…