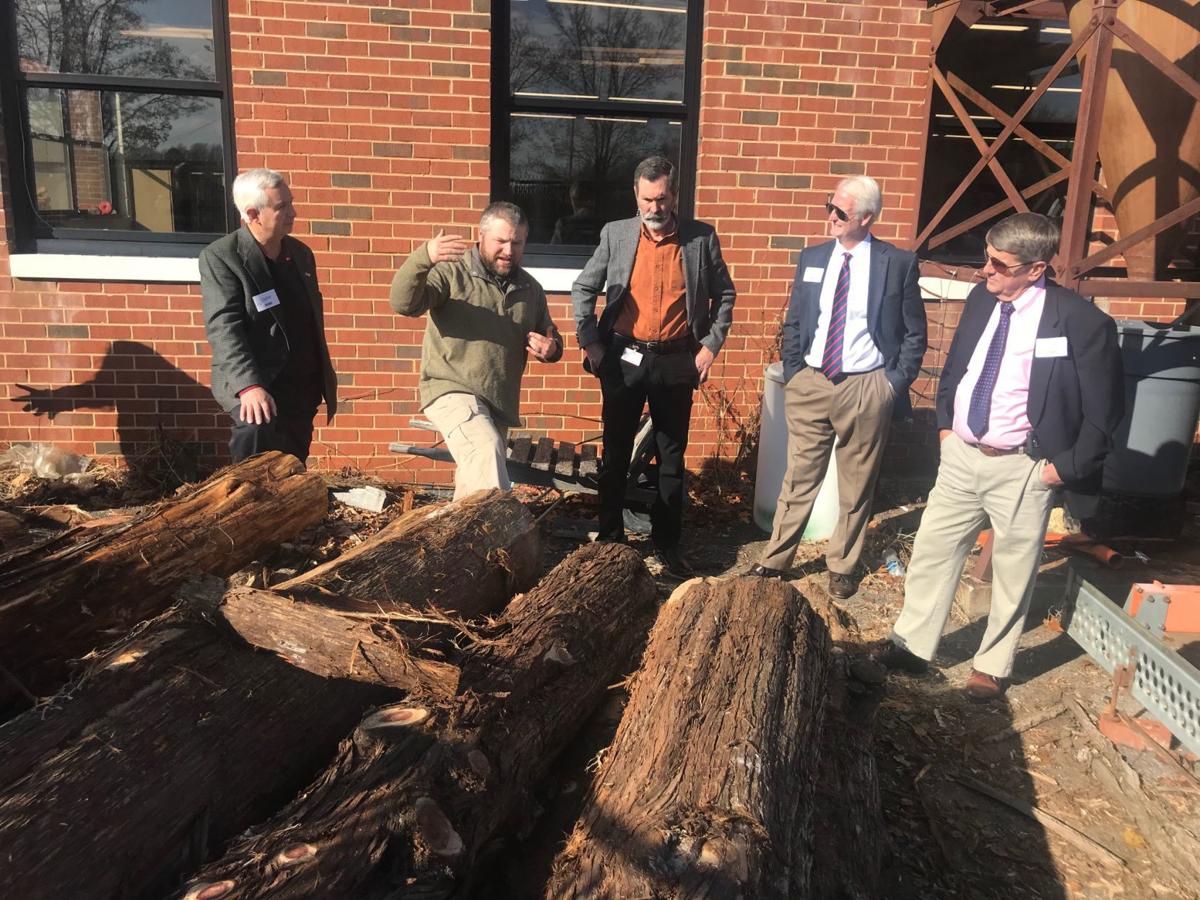 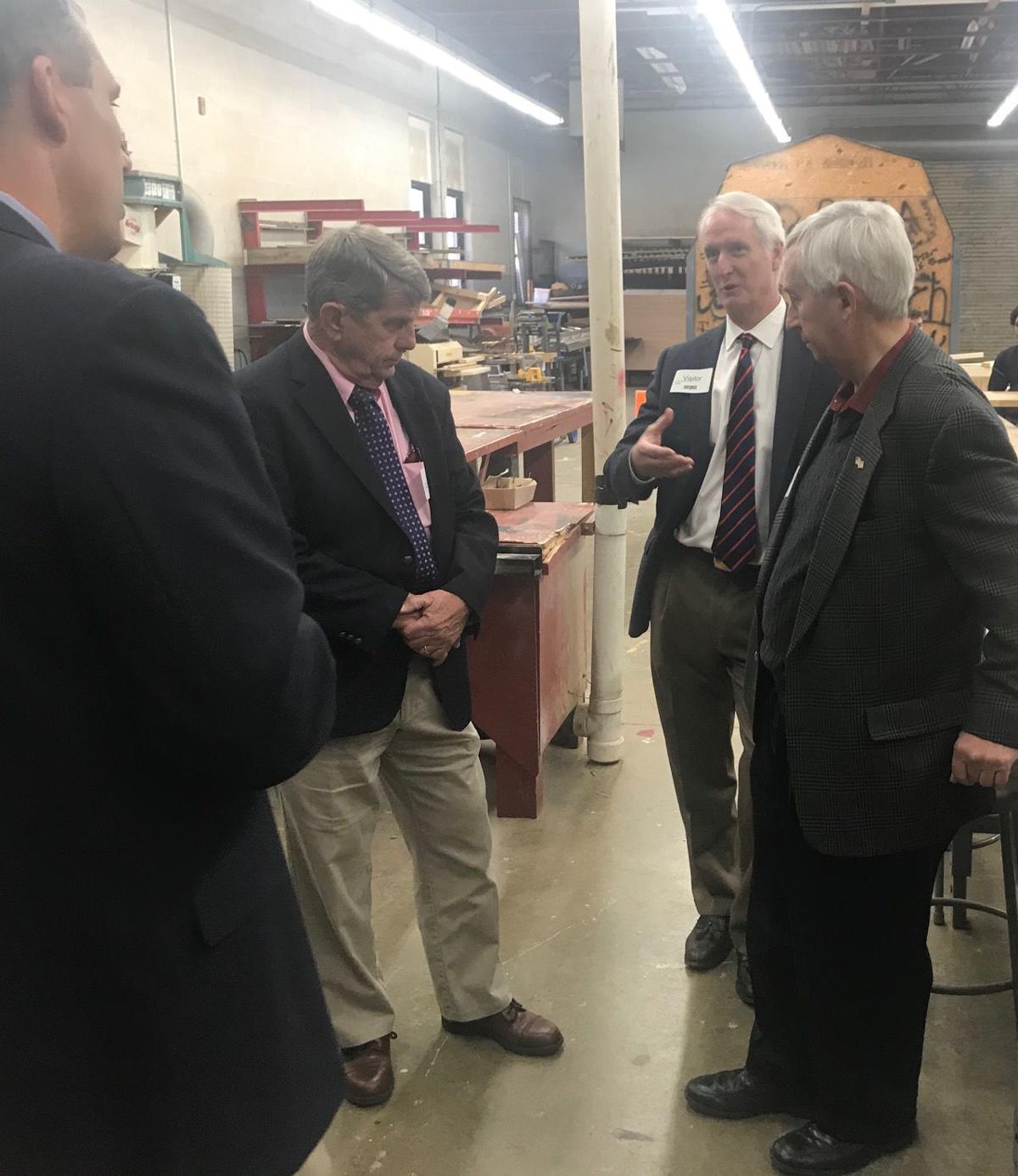 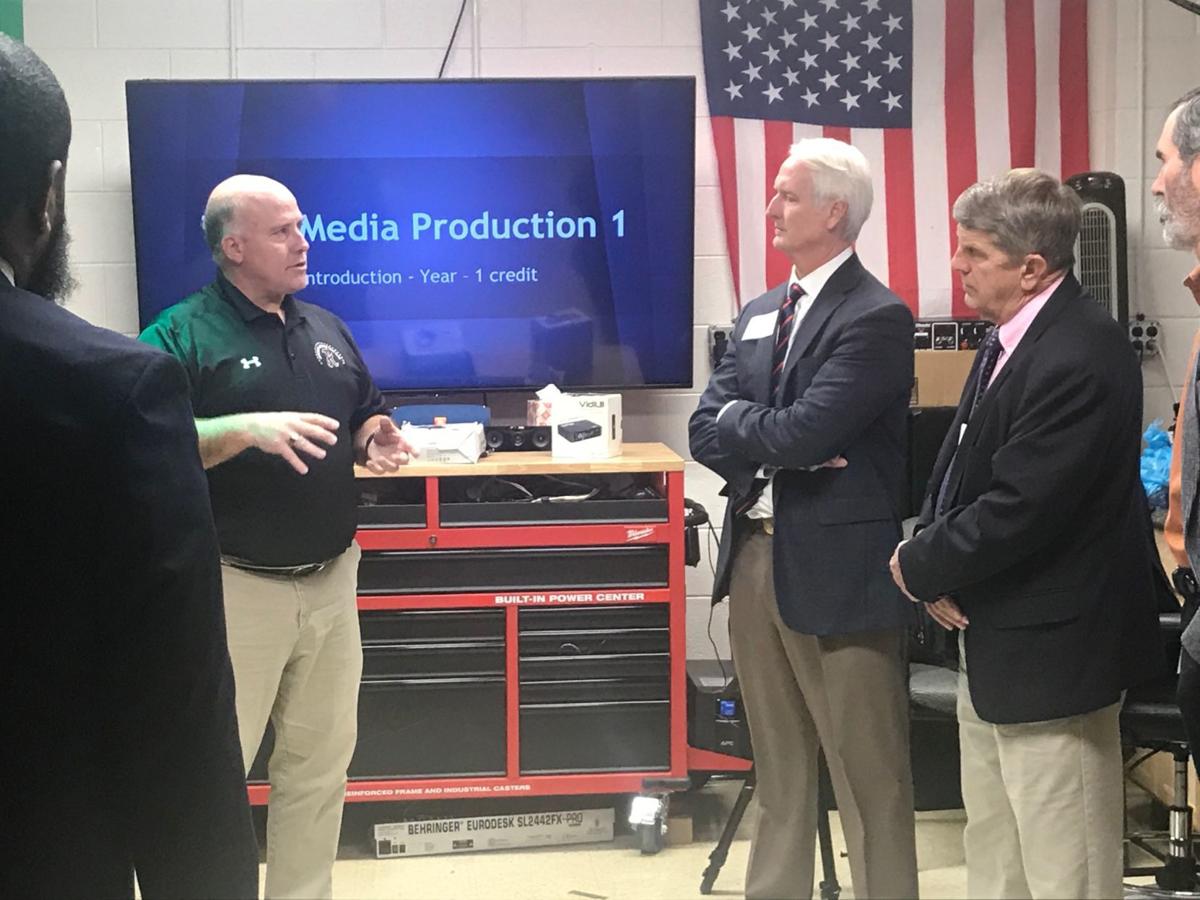 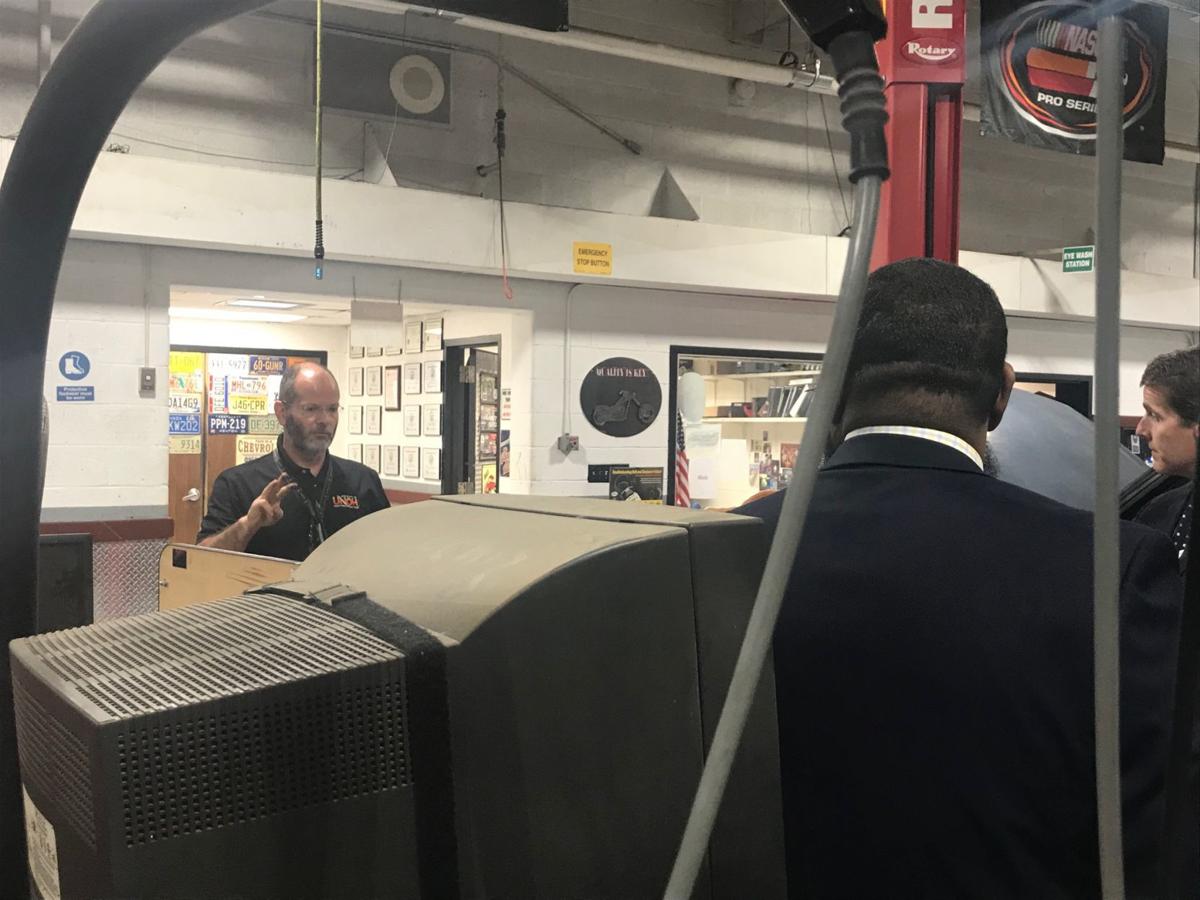 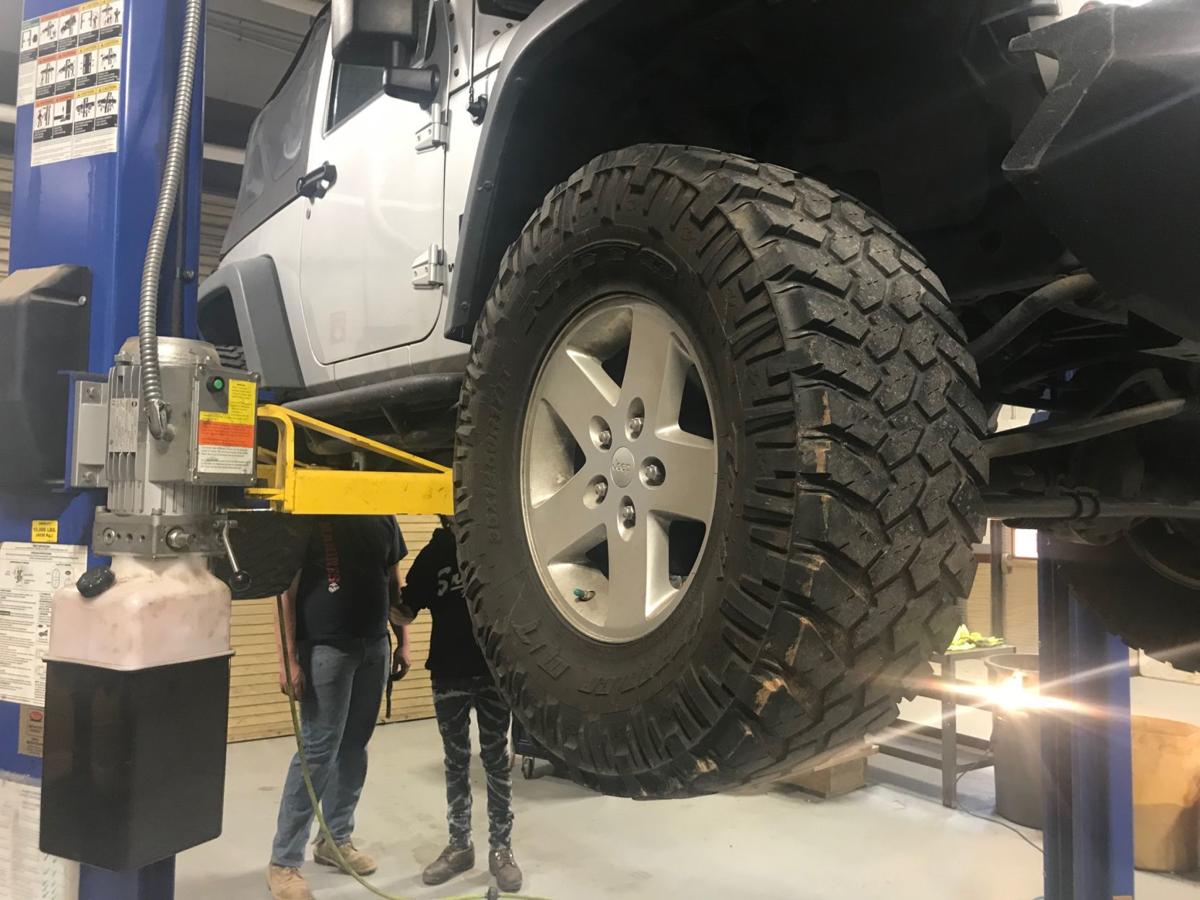 A month before they head to Richmond for the upcoming General Assembly session, three Amherst County-area state legislators received an up-close look at Amherst County High School’s career and technical education offerings during a Dec. 4 visit.

Sen. Mark Peake, R-Lynchburg; Del. Ronnie Campbell, R-Rockbridge and Wendell Walker, who on Nov. 5 was elected to the House District 23 seat, took part in the tour during a specially called Amherst County School Board meeting at the school.

Among the stops was the high school’s television and media production class taught by instructor Mike Cargill, who also heads the Amherst Lancers Tech Club. He explained the history of the course and club and the hands-on way the students learn media production and how their content is used in a variety of ways.

The students produce content from community events such as the Amherst County Fair and Amherst Christmas Parade, sporting activities and others. In the spring of 2018 they were instrumental in capturing drone footage of the devastation from a tornado that struck the Elon community.

“We really believe in what our students do and showcase it,” Cargill said.

Superintendent Rob Arnold said along with learning, those students are giving back to their community. The tour also included Roy Prior’s building and trades course’s shop, in which he said students learn all aspects of home building and areas such as carpentry, masonry, construction technology and some electrical.

The course, like others at ACHS, is an avenue into learning skills that prepare students for well-paying jobs as soon as they graduate.

“We have contractors beating my door down for people,” Prior said.

He said a larger problem the school faces is helping students with “soft skills,” which he described as showing up on time and being presentable in interacting with employers.

The group also visited the school’s “Busted Knuckle” Auto Shop that is much like a real-life garage. Instructor Ron McCafferty said he gets about 250 applicants a year for a course and he only has room for 40 spots. A mechanic for about 20 years before landing his first teaching job at the high school, he said entering the classroom was a learning experience.

“It still is,” he said. “I don’t think you ever stop learning as a teacher.”

He explained the skills and certifications the students in the high-demand course get that give them real-world experience. The legislators also had similar visits to the school’s course offerings in the areas of welding, advanced surveying, technical drafting and nursing.

Vicki Owen, who heads the nursing course offerings, said students learn a variety of skills and are “literally the eyes and ears at the bedside” of patients. They visit the Fairmont Crossing nursing home in Amherst and are certified in CPR and first aid, she said.

Those students are guaranteed to find work in $30,000-a-year entry-level jobs in the field of nursing because those positions are much needed in the Central Virginia area, according to Owen.

During a lunch with the legislators, Arnold spoke on how the division is pushing career and technical education to get students ready for jobs. A roadblock is the limited amount of space for high-demand courses and the lack of resources.

“It’s harder for students to get into our Busted Knuckle [program] than into the University of Virginia,” Amherst School Board Chairman Mike Henderson said.

Arnold said a new Regional CTE Academy in the planning and development stages is designed to make the high-demand areas such as health care, advanced manufacturing, pre-K education and public safety more accessible to students by pooling resources among five local school divisions. The goal is for a “one-stop shop” under one roof and the local business community would be a major stakeholder, Arnold said.

“Business has to own it because they’re the customer,” Arnold said.

Walker, who will succeed Del. Scott Garrett, R-Lynchburg, in 2020 said he is supportive of the CTE Academy as long as the local businesses are behind it, adding he doesn’t favor reproducing programs.

Campbell spoke of the academy’s role in helping employers with a need for workers.

Arnold also discussed with legislators the division’s many budget needs and addressed mental health and how recent Medicaid issues are affecting the division.

Marie Petrone, the division’s supervisor of accountability and student health, said in an interview with the New Era-Progress 135 students were receiving day treatment services by Horizon Behavioral Health but insurance providers recently denied coverage to about 90 of those students. She explained the insurance providers are looking at criteria for day treatment more narrowly.

She said such services are for students with behavioral or mental health issues and they manifest at school across all grade levels. Petrone said in the last month the division has lost 11 day treatment positions and that puts more work on teachers and staff.

“They still need the services and we’re filling the gaps,” Petrone said. “We’re going to provide services regardless.”

Board member Abby Thompson said she appreciates the state backing a 5% raise for teachers in the current budget.

“We need to keep working in those areas,” Thompson said of making sure school employees are properly compensated.

Peake said potential raises and more positions is going to depend on the state’s budget situation.

Arnold also expressed budgetary concerns as the legislators prepare for upcoming issues in the General Assembly, including bills centered on requiring certain seat belts on buses and raising the minimum wage.

On minimum wage, Arnold stressed he is not personally opposed and is only speaking to the state adopting new legislation and sending the mandate on without providing the money to offset the effect it will have on future budgeting.

“I just want the state to fund the mandate if they choose to raise the minimum wage, “ Arnold said after the meeting.

The budget would have to be adjusted to reflect such a major change, he added.

“I just have to have the ability to pay for it,” Arnold said of the potential effect on the budget. “If they give us the money, I would be glad to do it because I think the people are worth it.”

Campbell alluded to the new Democratic majority in the state legislature and changing climate ahead for Republicans.

“I think we’re going to be in a difficult position to stop it,” Campbell said of increasing the minimum wage.

He added he would strive for a common sense approach on the topic. The dialogue among officials during the meeting included a need for minimum wage reform to apply to regions and take into account the cost of living.