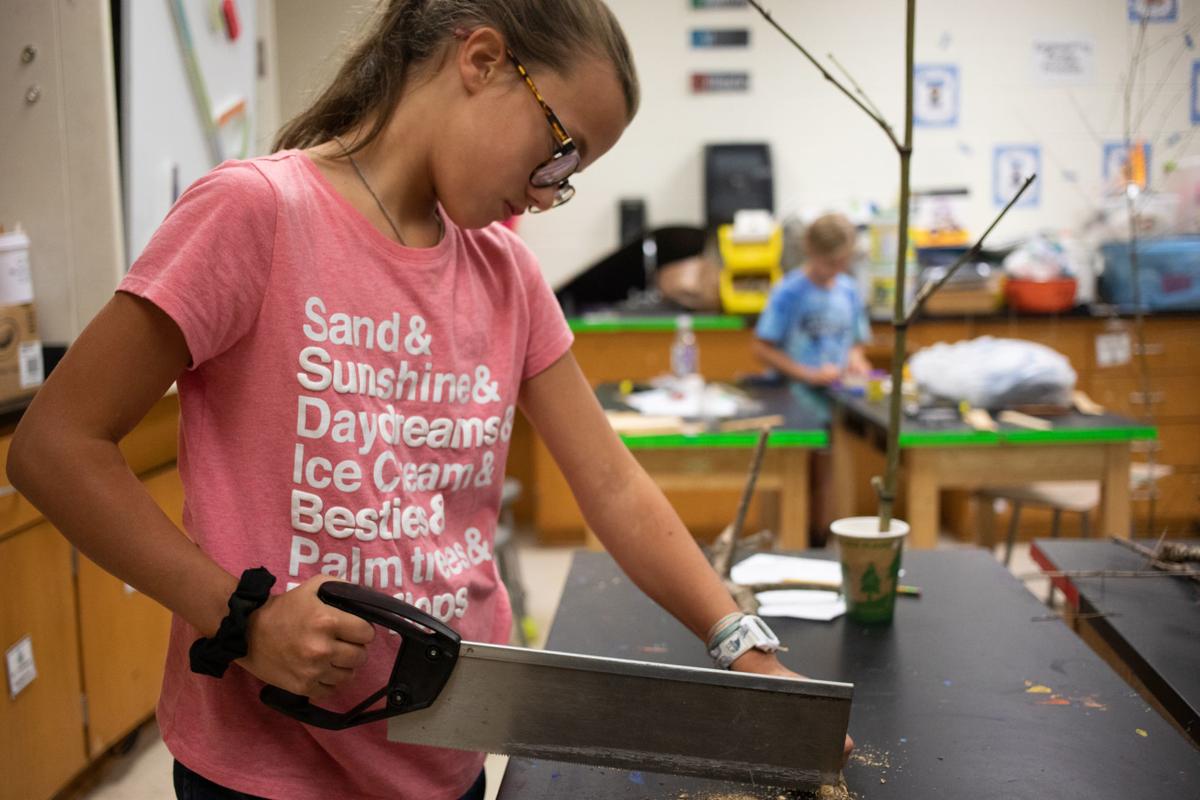 A rising fifth grader works on building a miniature tree house during a summer camp at James River Day School on Thursday. Throughout the week, students have learned problem solving, how to work in groups and STEM skills. 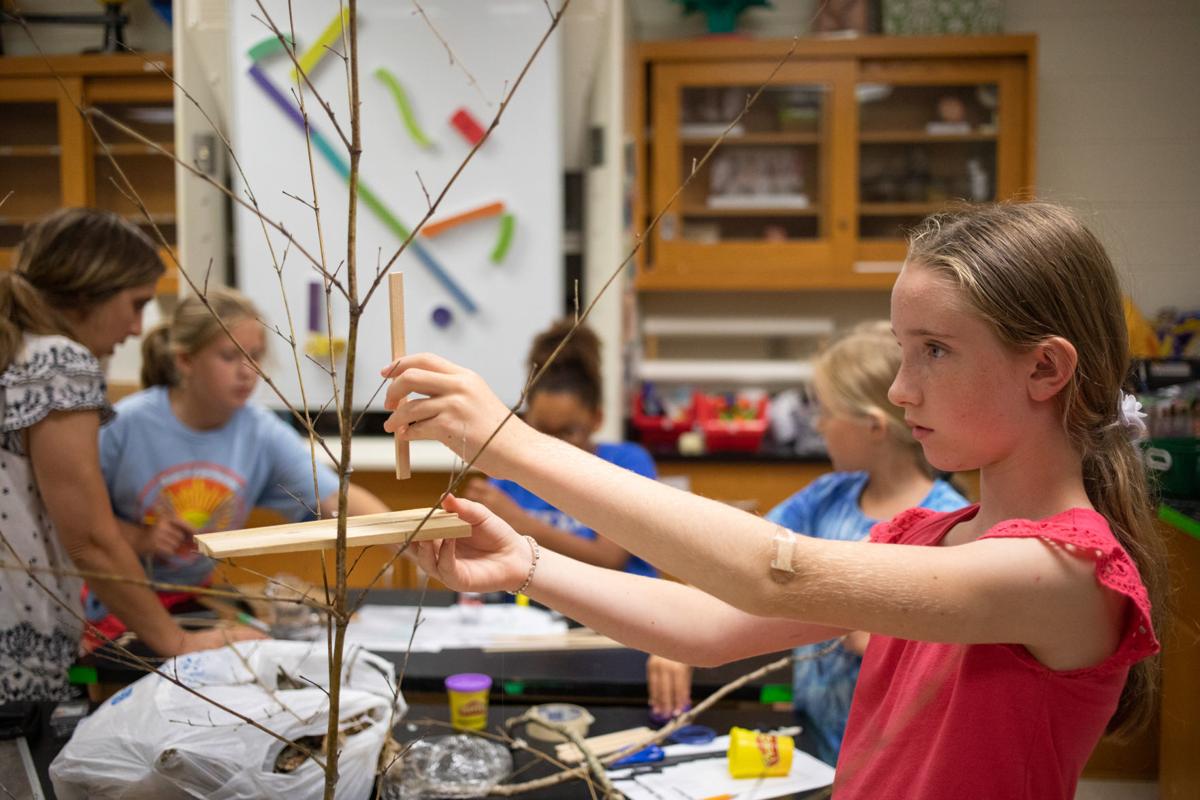 Rising fourth and fifth graders (above and below) work on building miniature tree houses during a summer Science, Technology, Engineering and Math camp at James River Day School on Thursday. 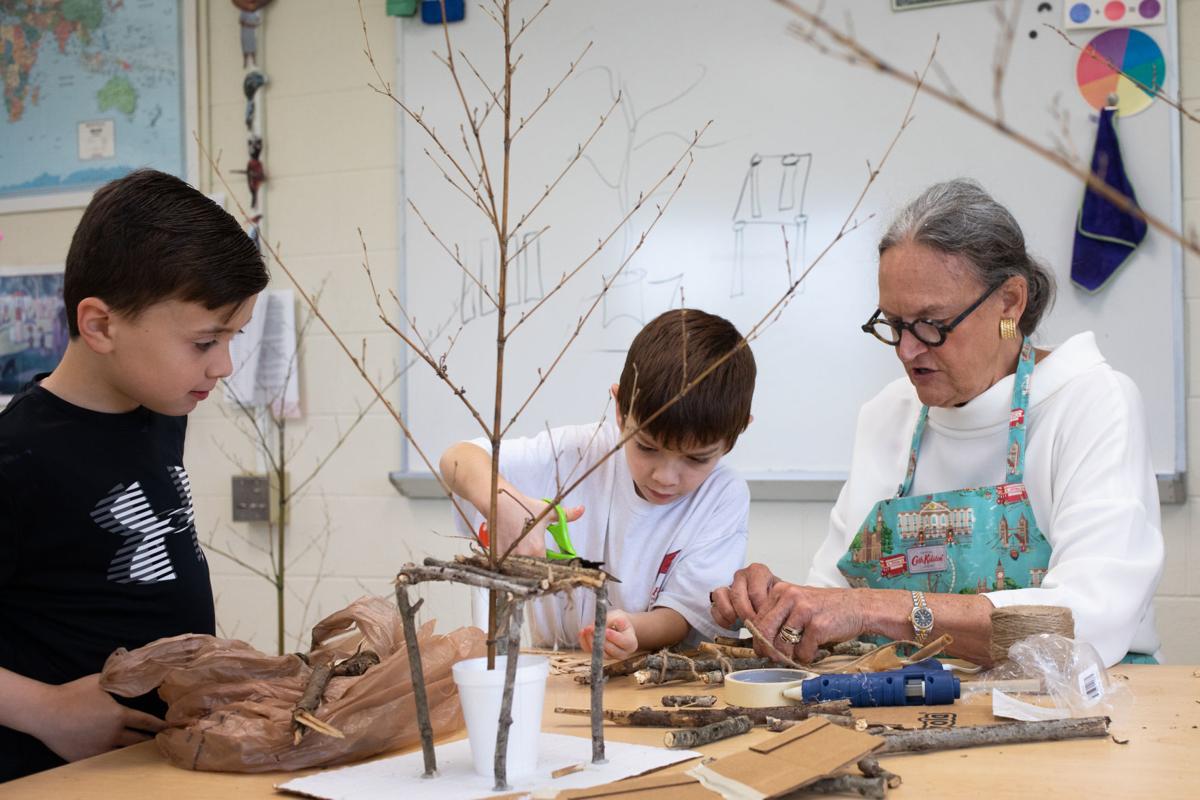 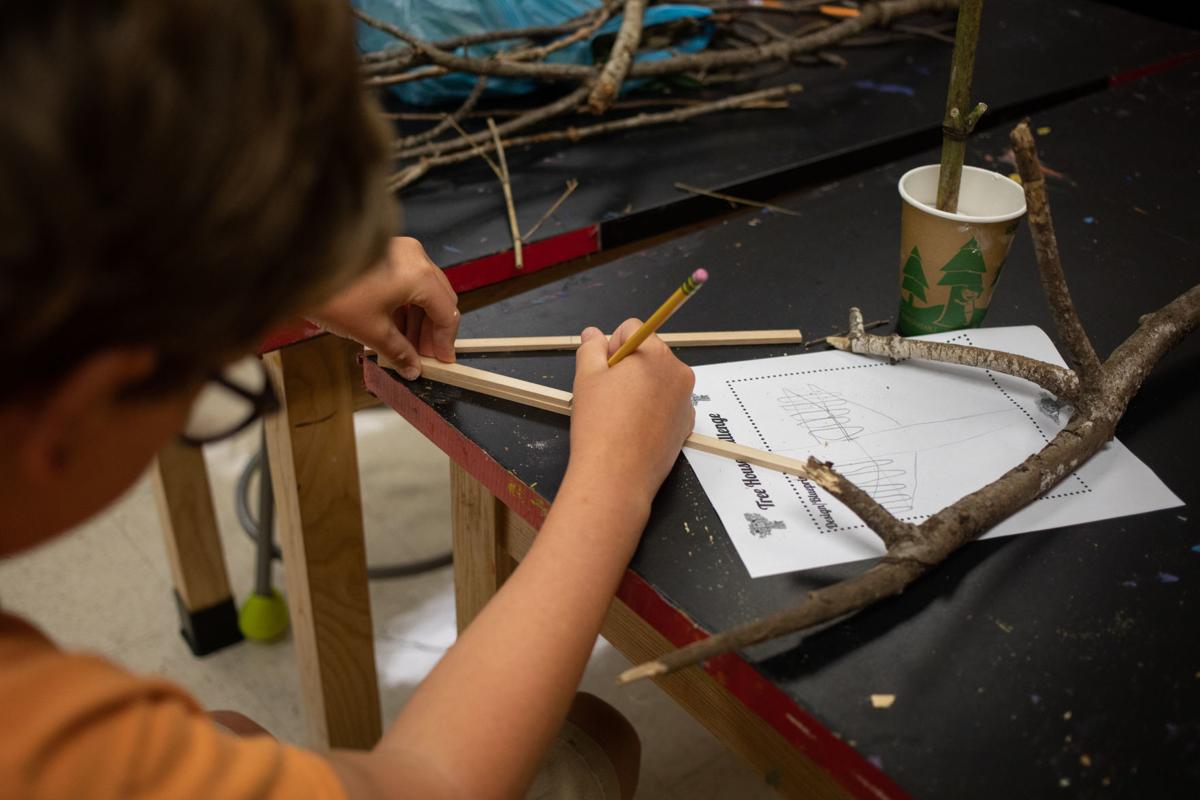 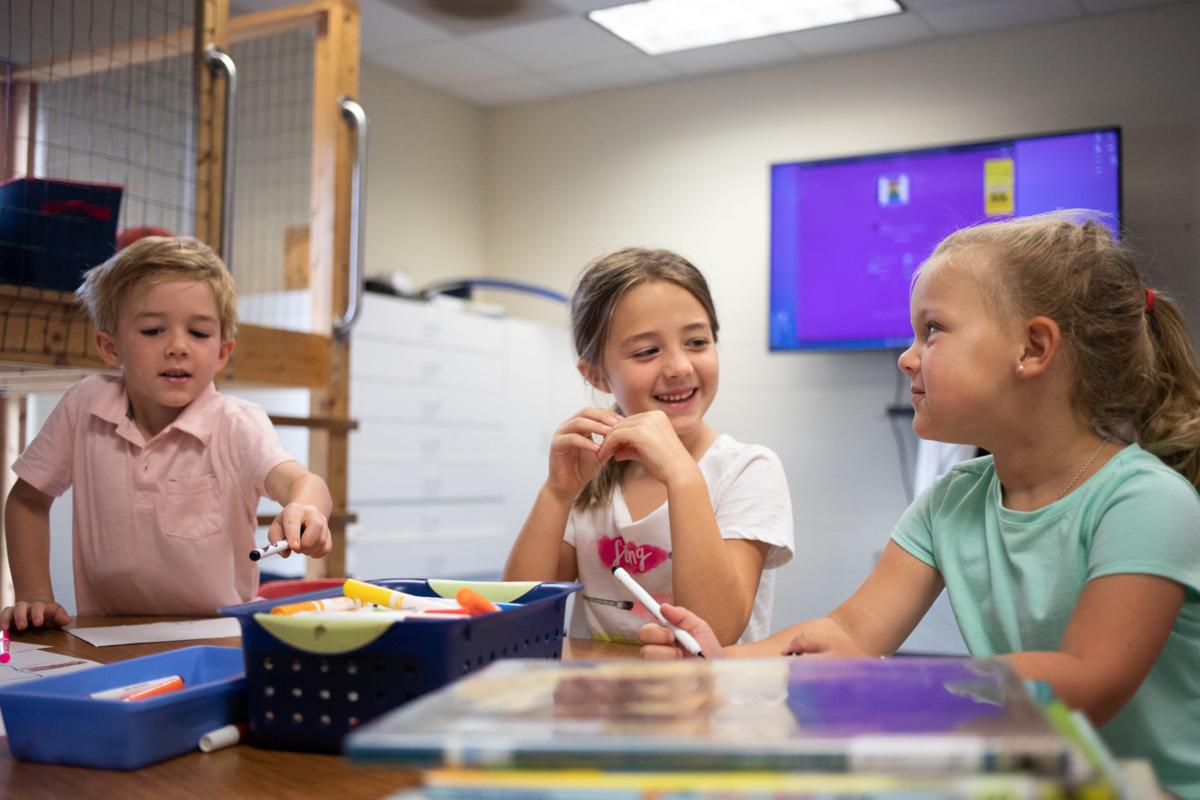 Rising kindergartners design blueprints for the construction of their miniature tree houses during a summer STEM program on Thursday, July 11, 2019 at James River Day School. 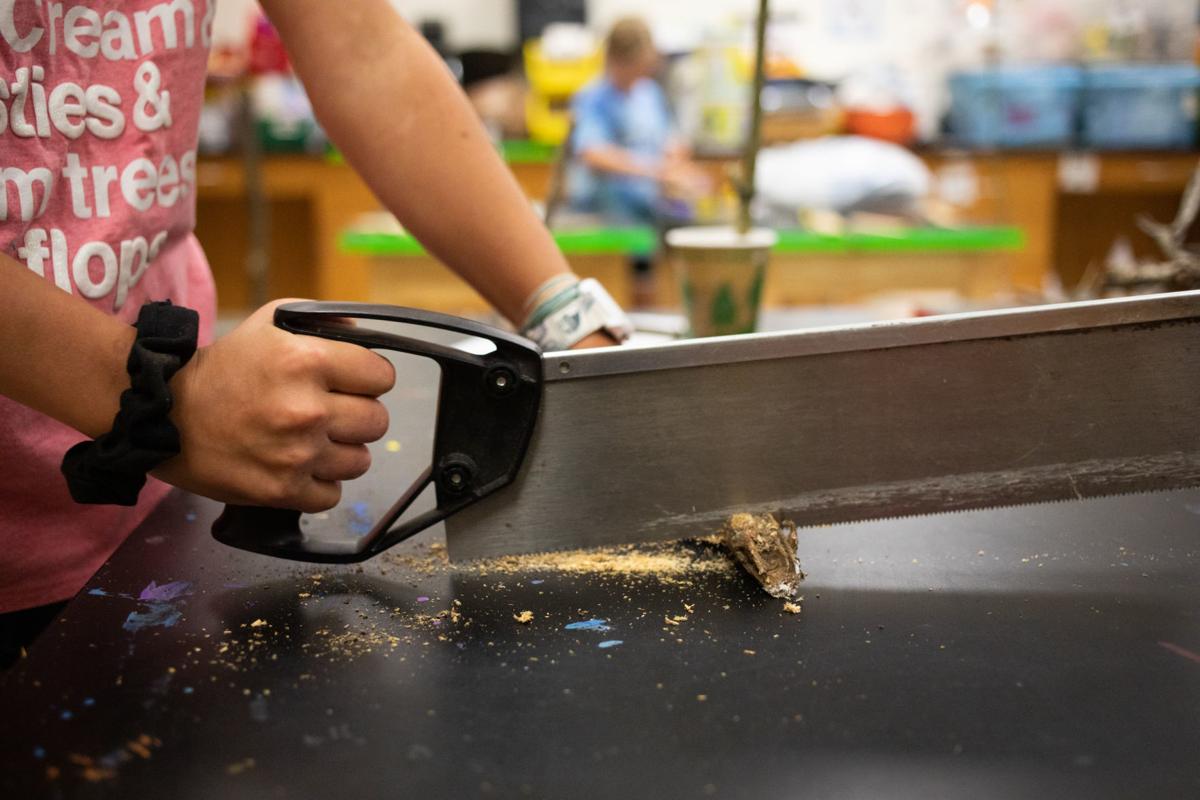 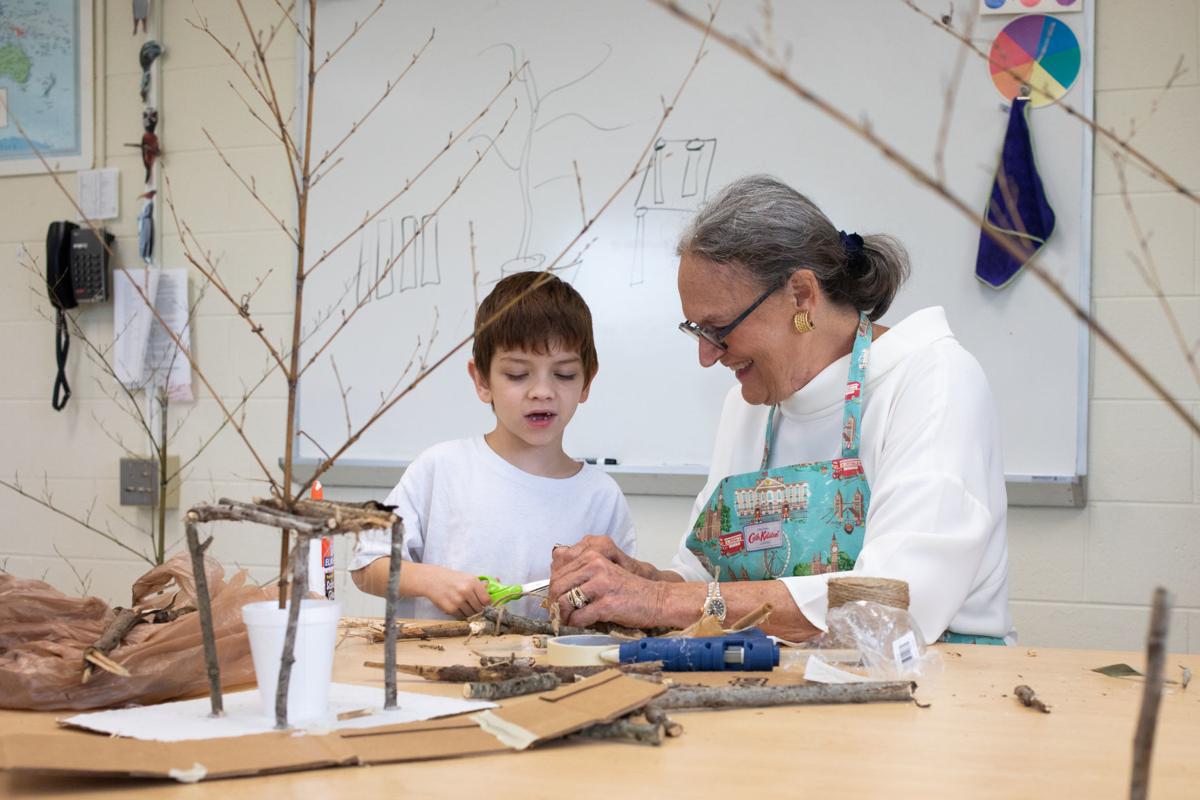 A rising fifth grader works on building a miniature tree house during a summer camp at James River Day School on Thursday. Throughout the week, students have learned problem solving, how to work in groups and STEM skills.

Rising fourth and fifth graders (above and below) work on building miniature tree houses during a summer Science, Technology, Engineering and Math camp at James River Day School on Thursday.

Rising kindergartners design blueprints for the construction of their miniature tree houses during a summer STEM program on Thursday, July 11, 2019 at James River Day School.

He carefully put the piece of tape on a small cardboard rectangle and then attached it to the stick floor to serve as one of the walls of his tree house.

Standing about a foot off the table, Tyler’s tree house rested in a small tree branching out of a Styrofoam cup. The tree house had four long, thick sticks supporting its stick floor, which was glued together with hot glue. A popsicle stick ladder was glued to the tree house and the base of the entire structure.

Tyler’s tree house was one of about 21 that James River Day School students were constructing Thursday during the school’s first-ever Science, Technology, Engineering and Math camp.

“[The camp] sparks their creativity. It challenges their innovation and allows them the freedom and independence to bring it to fruition what they have imagined in their head. They’ve been doing different projects all week,” fourth grade teacher Jeannie Heishman said.

The idea for the week-long summer STEM camp came from a group of teachers who attended a children’s engineering conference in Roanoke in February and saw a similar program.

“We’re trying to really establish the STEM lab and give opportunities for during the school year for each class to come in and do some activities and really develop that part of our program here. It’s exciting to kind of lay the groundwork with what we’re doing this week,” Heishman said.

Every morning the students, ranging from rising kindergartners to rising fifth graders, came together to read a book that related to the engineering challenges schedules for the day.

On Monday, students created houses out of toothpicks that had to be able to hold 20 grams and had to be six centimeters high. Students on Tuesday built tic-tac-toe boards and geoboards — square boards with pegs and rubber bands used to learn early geometric, measurement and numeracy concepts — which taught them how to use different tools.

“They just blow my mind how creative they are, and they know exactly how they want it done. It’s really been a fun week,” second grade teacher Margaret Daniel said.

“[The field trip] was very good. It was very inspiring to see the designs of the tree houses,” Tyler said.

Heishman said Thursday’s tree house project was the culmination of other projects throughout the week as the students pulled skills they’ve learned during the camp and figured out what works and what doesn’t when it comes to building.

Middle school math teacher Gessi Wright said a personal challenge for her this week has been letting the students figure out what’s wrong or how to make their projects work.

Wright worked with the rising kindergarten students during the camp. She said it’s been fun watching them work on their different projects.

“It’s amazing to see their creativity and the different ideas each one has,” Wright said.

Kindergartners had a small plant to put their tree houses in. They started out drawing blueprints and then used Play-Doh, pipe cleaners, cardboard, small wooden boards and other materials to create their tree houses.

Wright said sometimes their plans didn’t always work when trying to construct the actual tree house, but she continued to encourage them to work through their plans and figure out how to solve problems that arose.

Throughout the week, students learned problem solving, how to work in groups and STEM skills, Heishman said.

“It’s exciting to me to see those skills develop throughout the week, and they feel more confident by today. Whereas Monday some of them were saying, ‘I don’t know how to do this, I don’t know how to get started.’ Today, they all have just jumped right in,” Heishman said Thursday.

Rising fourth and fifth graders, some in pairs, were using drills, saws, hot glue and other tools to construct their tree houses Thursday.

Rising fifth grader Lynley Cannon said she wanted to participate in the camp because she likes to “build stuff.”

Lynley, 10, said the week has come with a few challenges such as when she was trying to build a house by hammering two pieces of wood together, and the wood split. She said she enjoyed building the tree house the most because it involved teamwork and seeing if what she planned could come to fruition.

Daniel said the school will have STEM camps “every summer from here on out.”