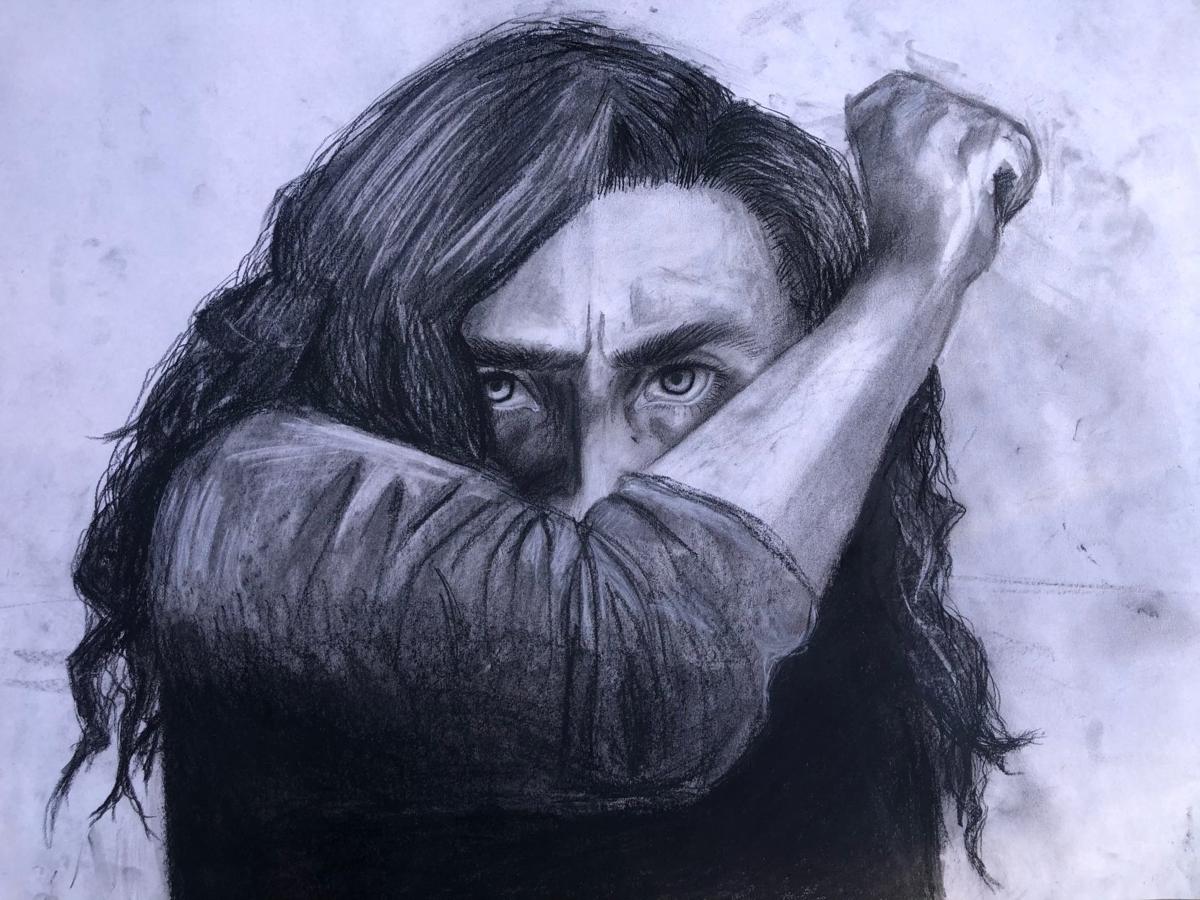 A sketch by Rena Conklin. 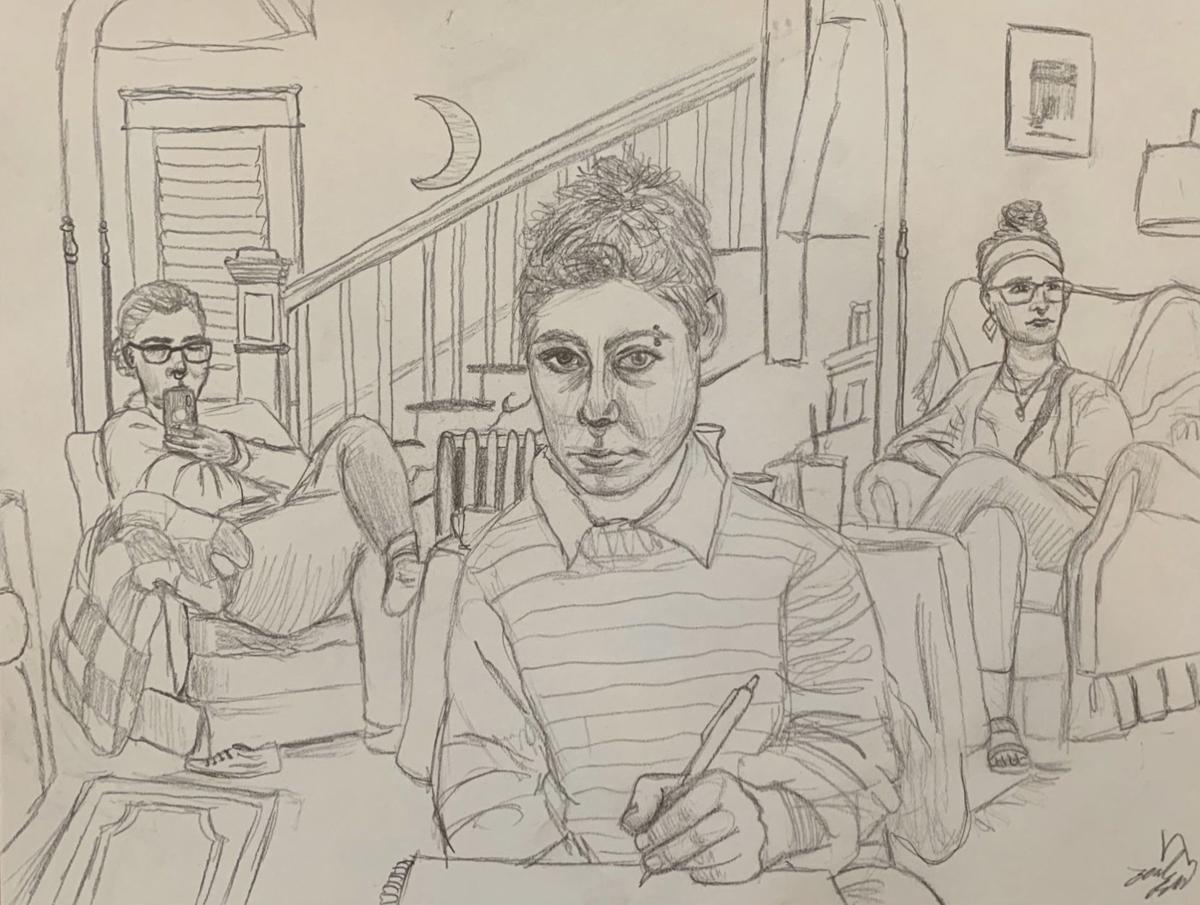 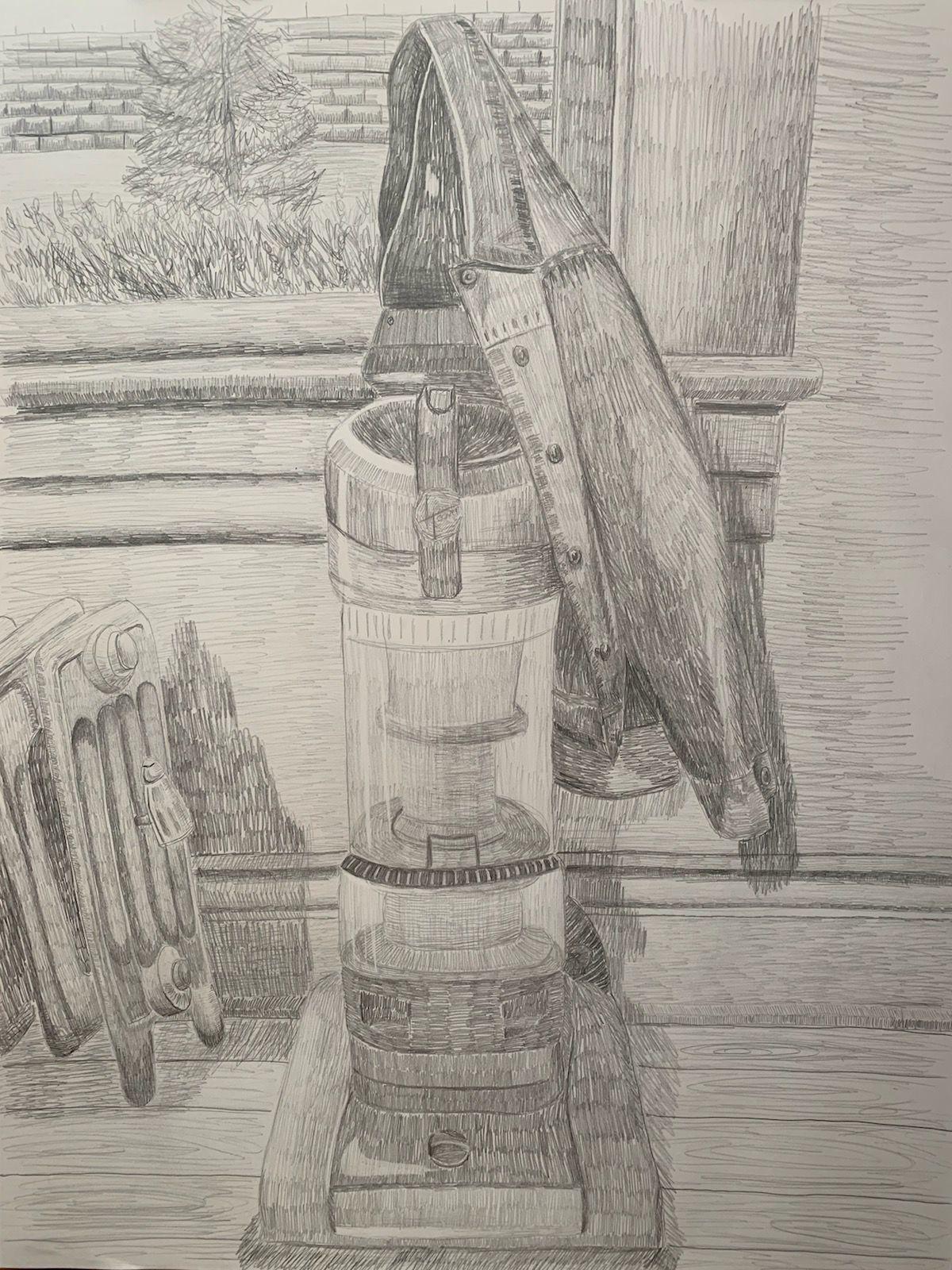 "Self portrait as vaccuum cleaner" graphite on paper 18" x 24", by Z Girrifths. 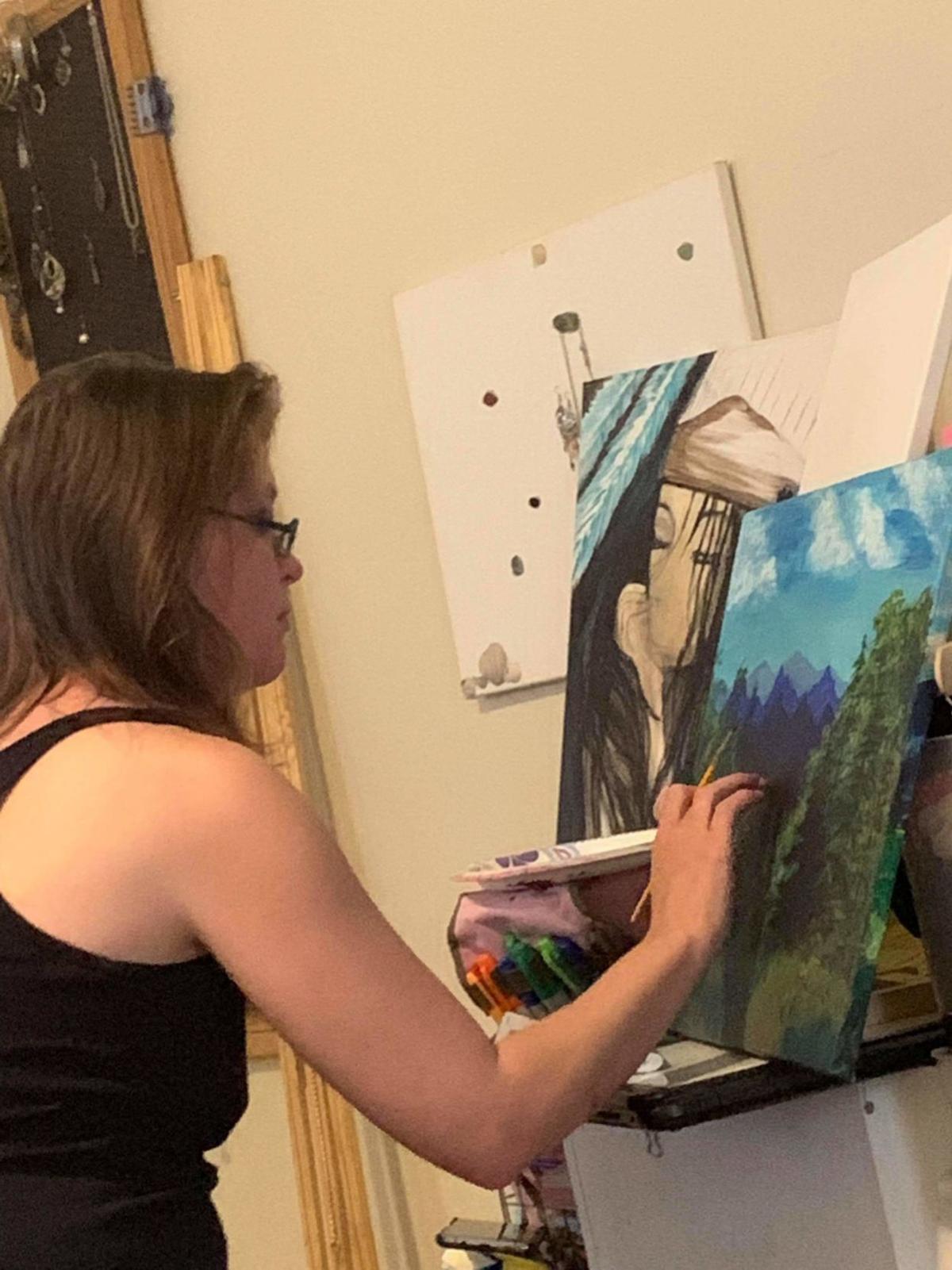 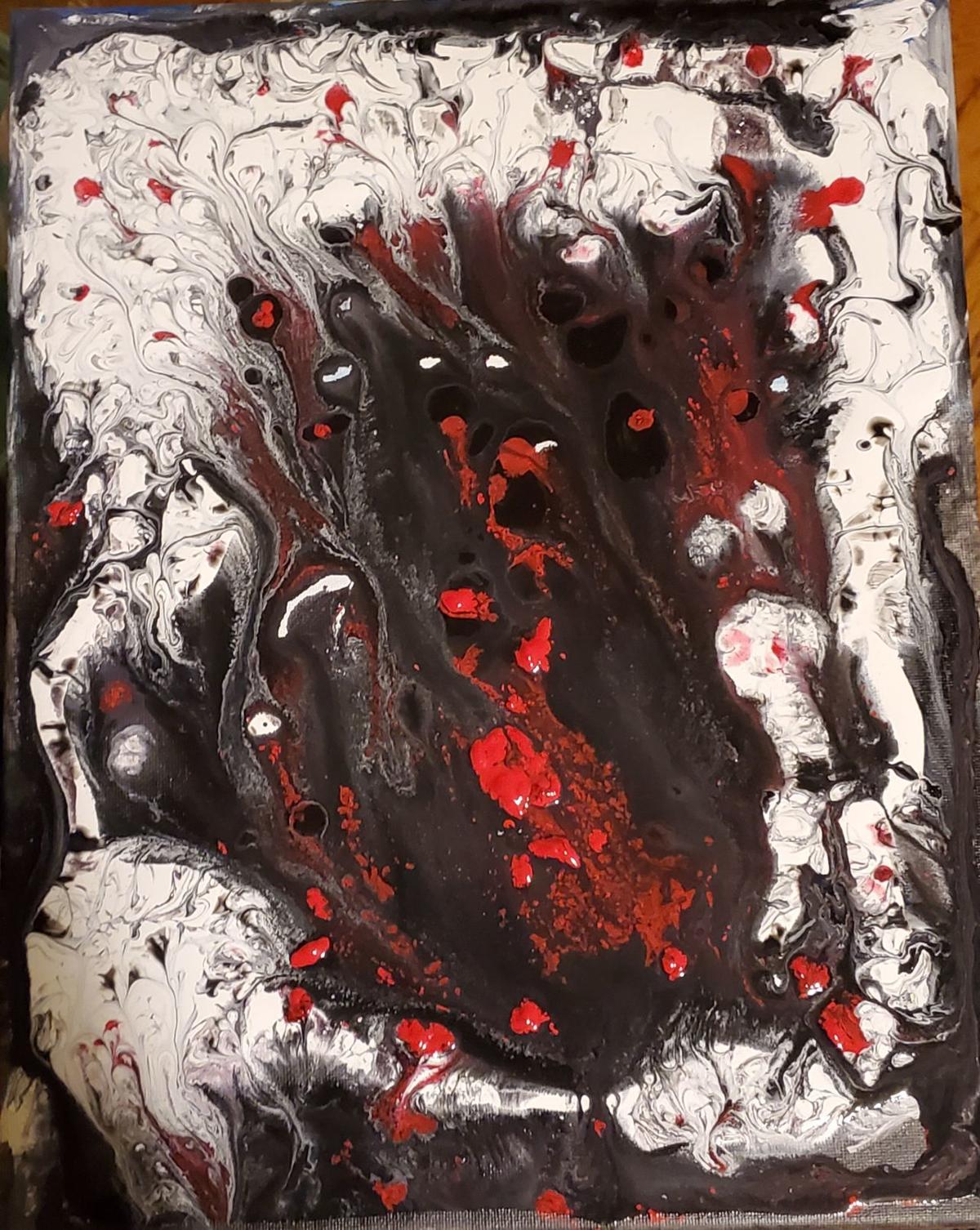 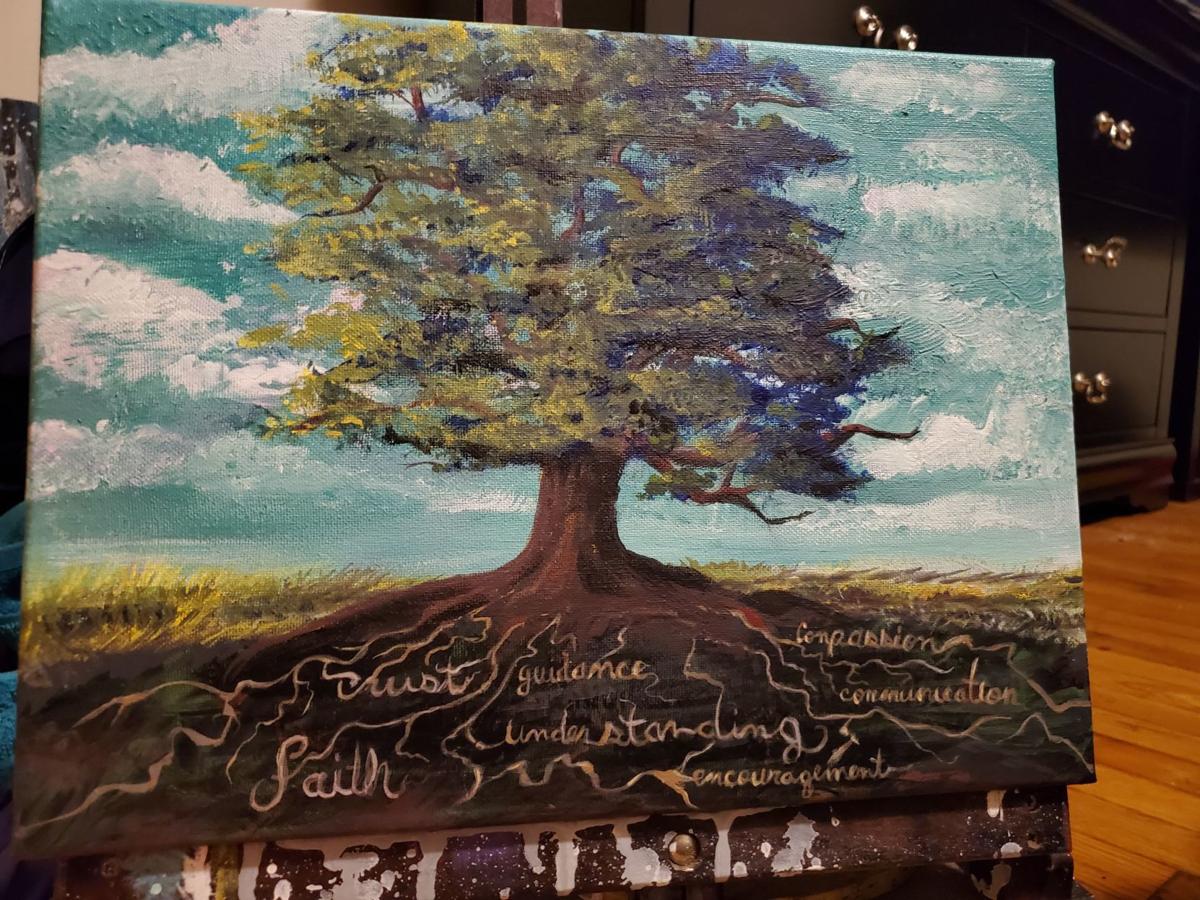 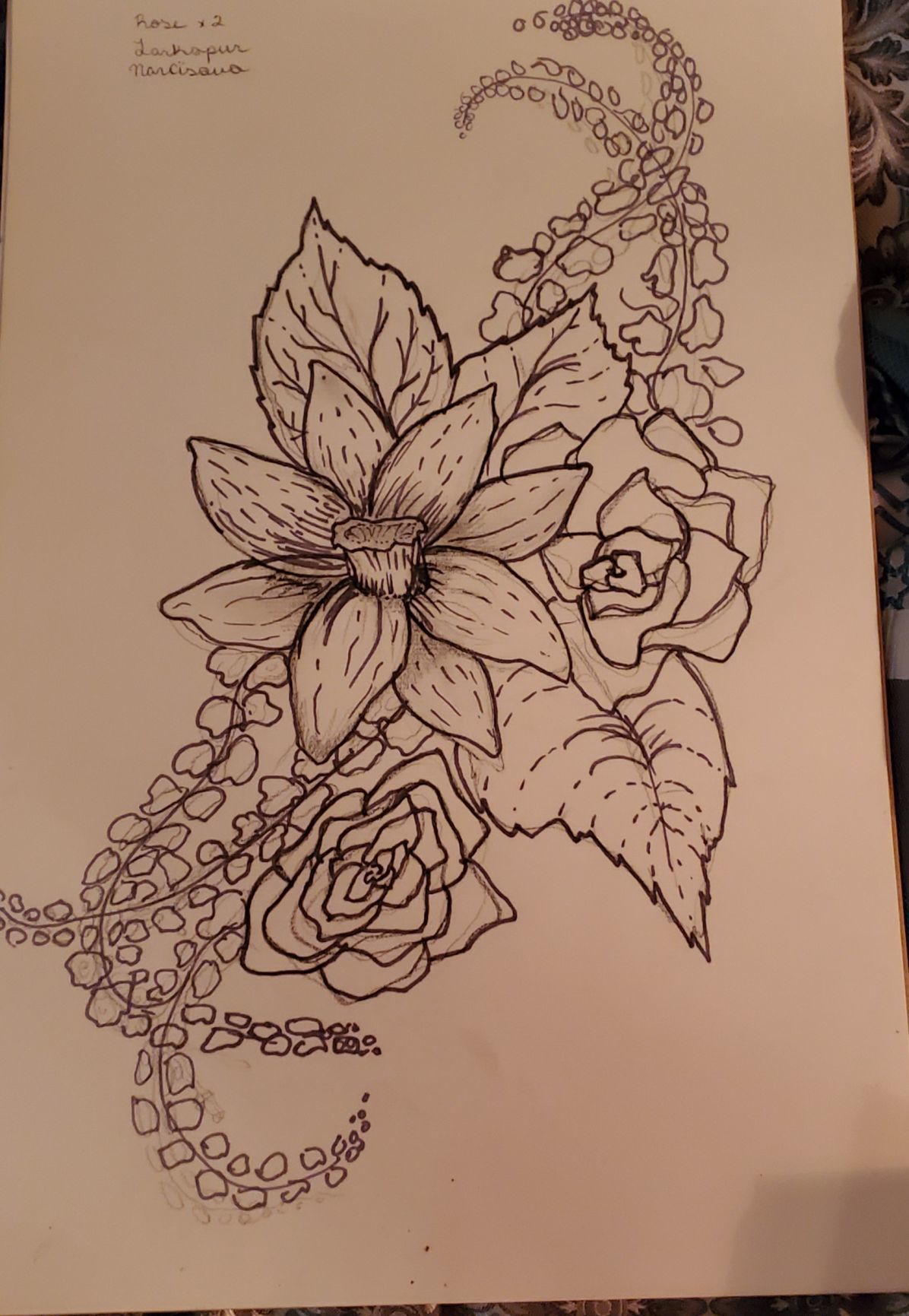 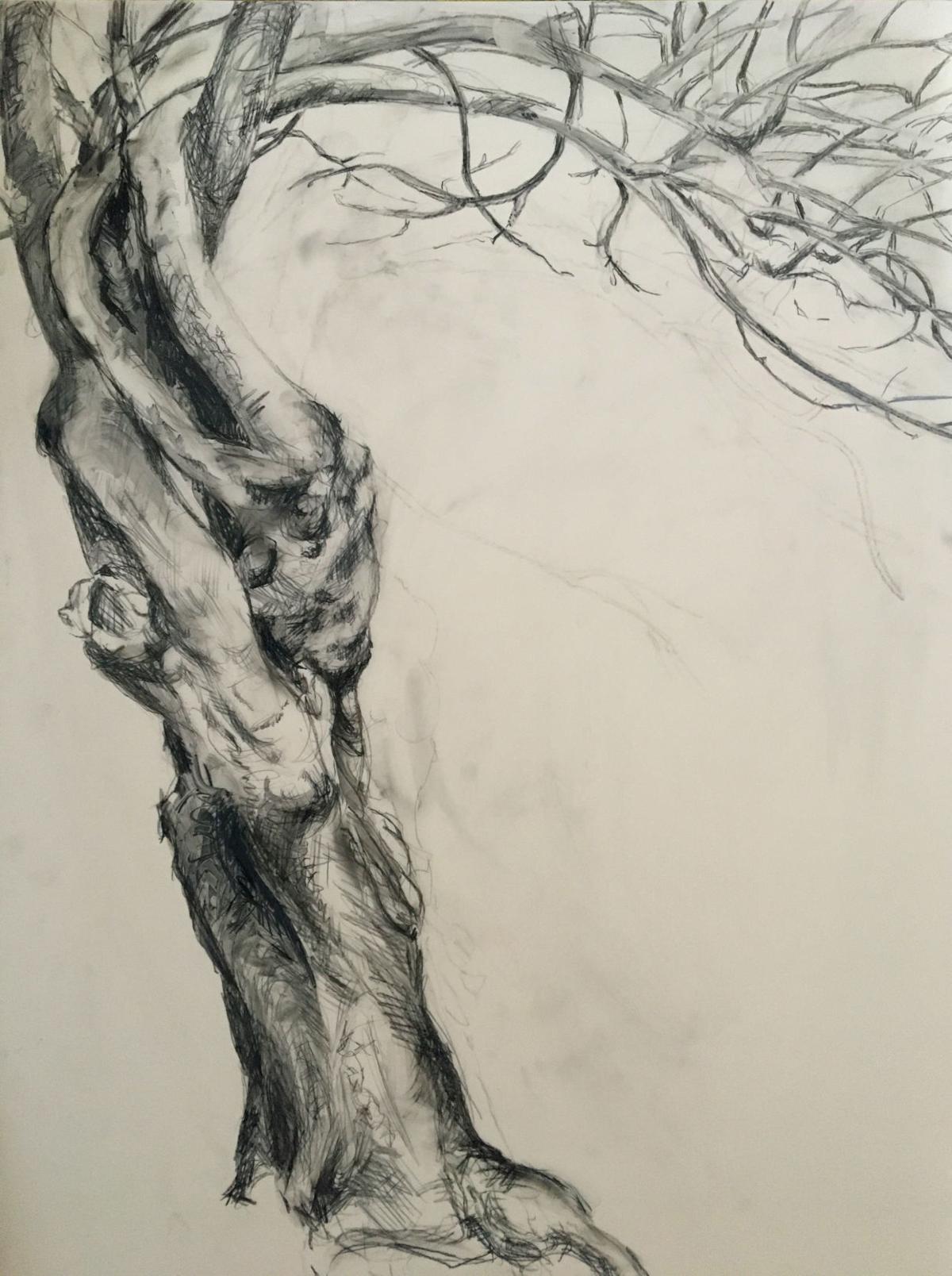 A sketch by Bev Rhoads, associate professor of painting and drawing at the University of Lynchburg.

A sketch by Rena Conklin.

"Self portrait as vaccuum cleaner" graphite on paper 18" x 24", by Z Girrifths.

A sketch by Bev Rhoads, associate professor of painting and drawing at the University of Lynchburg.

Z Griffiths said it’s like being trapped in an eternal Friday night.

Quarantined off campus in a house with two roommates and time to kill, Griffiths, 21, a studio arts major at the University of Lynchburg, said it’s hard to produce healthy habits when others aren’t watching.

“It’s the middle of a crisis, I’m trying to have grace,” Griffiths said. “If I don’t come out of this with new artwork, a six pack and better eating habits, that’s OK.”

There’s the unexpected side effect of a pandemic: the sudden pressure for everyone to be prolific.

Write a novel. Learn a language. Paint the garage. Finally get around to that home renovation project you’ve been putting off for six months.

Cooped up in the house with nowhere to go, people are scrambling to fill the time.

For Griffiths, it’s a return to basics. Homeschooled from K-12, it’s weird to be back in lockdown, with schoolwork and classes again reduced to four walls.

“When I was teaching myself art in high school, it was just me in my room. And here I am again,” Griffiths said.

It is, as everyone seems to be continually reminding each other, a whole new world.

Rena Conklin’s mirror is broken. Normally, that wouldn’t be much of a problem. But forced into self-isolation on a 45-acre farm in Kentucky, it presents a new kind of obstacle.

A few weeks ago, Conklin, 21, was studying studio art at the University of Lynchburg alongside Griffiths. In her figure drawing class, students sketched from nude models, whittling three-dimensional life into two-dimensions, looking externally at the human figure in a class surrounded by others.

Now, Conklin is creating self-portraits from a makeup mirror propped on her desk.

Six hours from Lynchburg, expelled by COVID-19 and a mass exodus from campus, Conklin is left with only herself as a model.

With charcoal or graphite, Conklin sketches herself slumped onto her fist and coughing into the crook of her arm.

Beverly Rhoads, associate professor of painting and drawing at the University of Lynchburg, who teaches both Griffiths and Conklin, said the work coming out of her students’ quarantines is the best she has ever seen them make.

There is honesty to looking at yourself in a mirror in the middle of a pandemic.

“One of the things that really impressed me is their willingness to make themselves vulnerable,” Rhoads said. “When you work from a stranger you’ve never met, they are disrobing and sitting like a bowl of oranges. That’s very different than looking at oneself in the mirror.”

Griffiths said they and their classmates are experimenting with new styles and producing art unlike anything they’ve done before.

“We feel a little bit set free in the isolation,” Griffiths said.

Griffiths’ own self-portrait — pencil in hand, staring at the viewer head on, roommates lingering the margins — feels like a confrontation.

“Rhoads has taken this pandemic almost as a new prompt,” Griffiths said of their professor’s assignments, using the events and emotions around them as inspiration. “She is encouraging us to not continue to work on our art as if nothing has happened, but notice that something has happened, and use that in our art.”

Rhoads said she recognizes a new focus on her students’ work without distractions pulling them in different directions.

“Assignments like the self-portrait project ask them to reflect on their thoughts and feelings of the current situation, and yielded some pretty terrific work,” Rhoads said. “They have a finger on the pulse of social consciousness.”

For some, it was an expression of stories with no other outlet. Through these recent assignments she has learned she has students whose parents are nurses, others whose parents perform essential services that require them to put themselves on the front lines of the pandemic.

“[Their work] illuminated for me the little corners of this we don’t really see,” Rhoads said.

Griffiths described their artwork as an opportunity to catalog the things going on around them. Despite pressure to globalize the message, to attempt to tackle the pandemic head on, Griffiths said it was easier to start small.

“It’s hard for me to boil down a global phenomenon into an art piece,” Griffiths said. “We can preach about what’s going on all we want, but the only new thing we can bring to the table is our personal experience.”

Like Conklin, who described an assignment spent studying empty space — an object that suggests the presence of a person there, even with no one in frame.

She said her dad is an essential worker in Seattle, and the city feels like Sunday at 7 a.m. every day.

“We are becoming this world that is empty, almost, and things are really changing,” Conklin said.

“We need to keep making art … keep showing people art. While everyone stops their daily lives, everyone should participate in art in any way they can.”

Some, such as Lynchburg artist Candace Henderson, are creating more than ever.

Deep in preparation for her art show coming up in August at Madison House of the Arts in Lynchburg, she has turned her entire kitchen into an art studio.

Working from home, in the lull between online classes and helping her 9-year-old daughter through her school work, Henderson, 31, said she continues to relate with the world through her art.

Using acrylics, her show will explore her journey through addiction to sobriety. She’s created several pieces during quarantine, and used the time to develop her work.

Already battling depression and anxiety, she said her daughter, music and art are all that keep her grounded.

“Without my art right now I’d probably be a couch potato,” Henderson said. “Just a sack of depression.”

It’s art that keeps her sane. That and plenty of Red Bull, she said with a laugh.

Michelle Short, 36, another Lynchburg artist, also uses her art as a form of therapy.

She started painting 12 years ago, using it as a way to escape domestic violence, and never stopped.

A single mom of four teenagers, her bedroom has become a haven for her art.

“Normally I would have to find time to do artwork,” Short said. “Now I have all the time in the world.”

The quarantine forces artists to find inspiration in unexpected places.

Conklin said she has thrown herself into gardening. Turning the flower beds, digging in soil, she has found old plow blades, pieces of an oil lamp, even shards of glass and stoneware. She wants to draw those — true symbols of absence of people, objects left behind.

Rhoads, living in Farmville, is helping out around her neighbor’s farm. Something as simple as watching asparagus grow makes her heart happy, she said. And that’s what leads to new art.

Even Griffiths, stuck in the Lynchburg suburbs, has taken to going on walks, finding inspiration in trees and landscapes, in empty parking lots and city streets.

Rhoads said she predicts a flourishing of the arts when this is all over, similar to the wake of World War II.

“Art can bring solace to humanity,” Rhoads said. “We can see ourselves in art. We can see others.”

FALLS CHURCH — For the third straight day Virginia health authorities are reporting a drop in the state’s number of new coronavirus cases.

This is a great article!! You captured the "soul" of these folks. Maybe they would allow you to post more of their "sheltering" work.