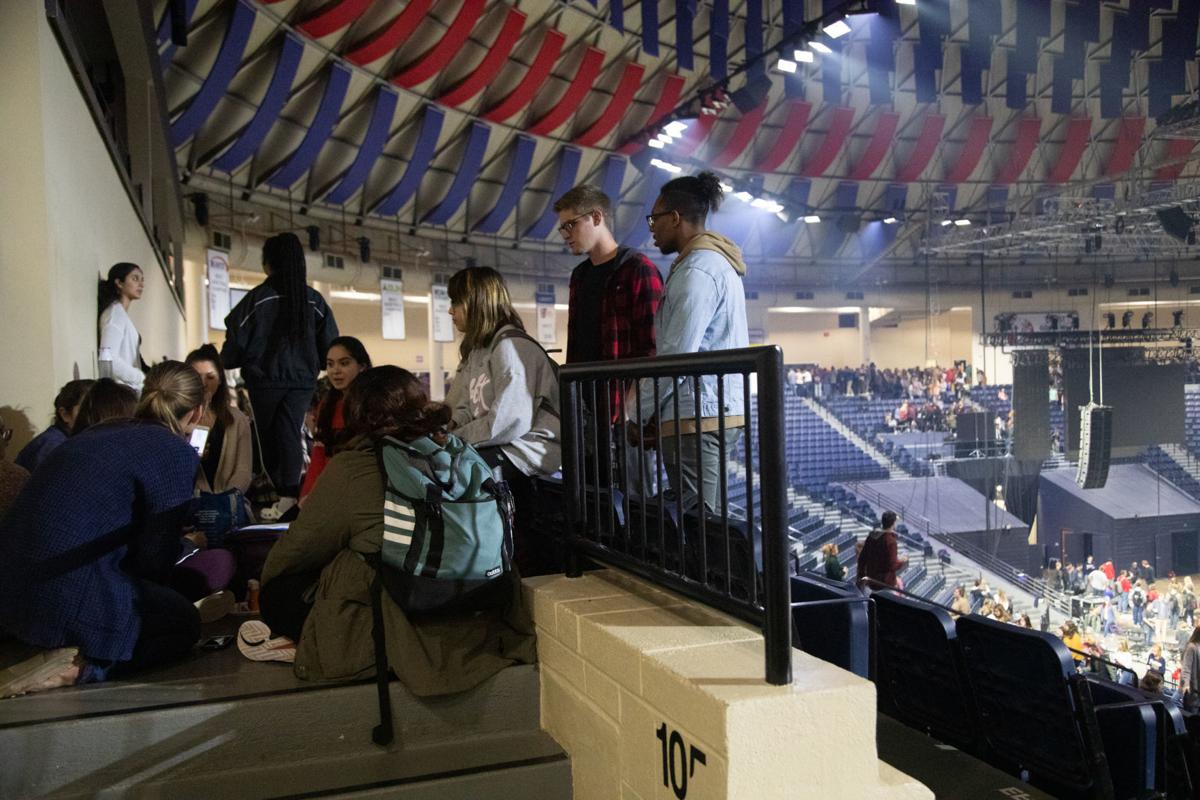 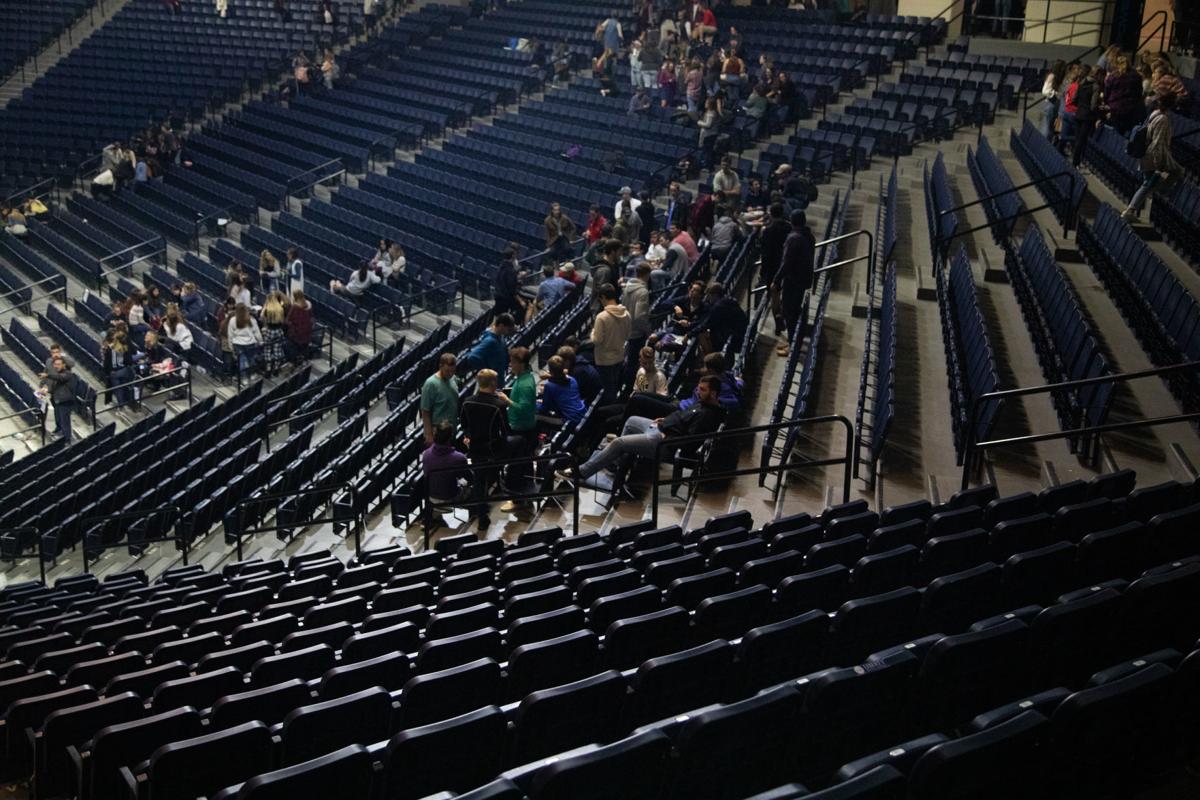 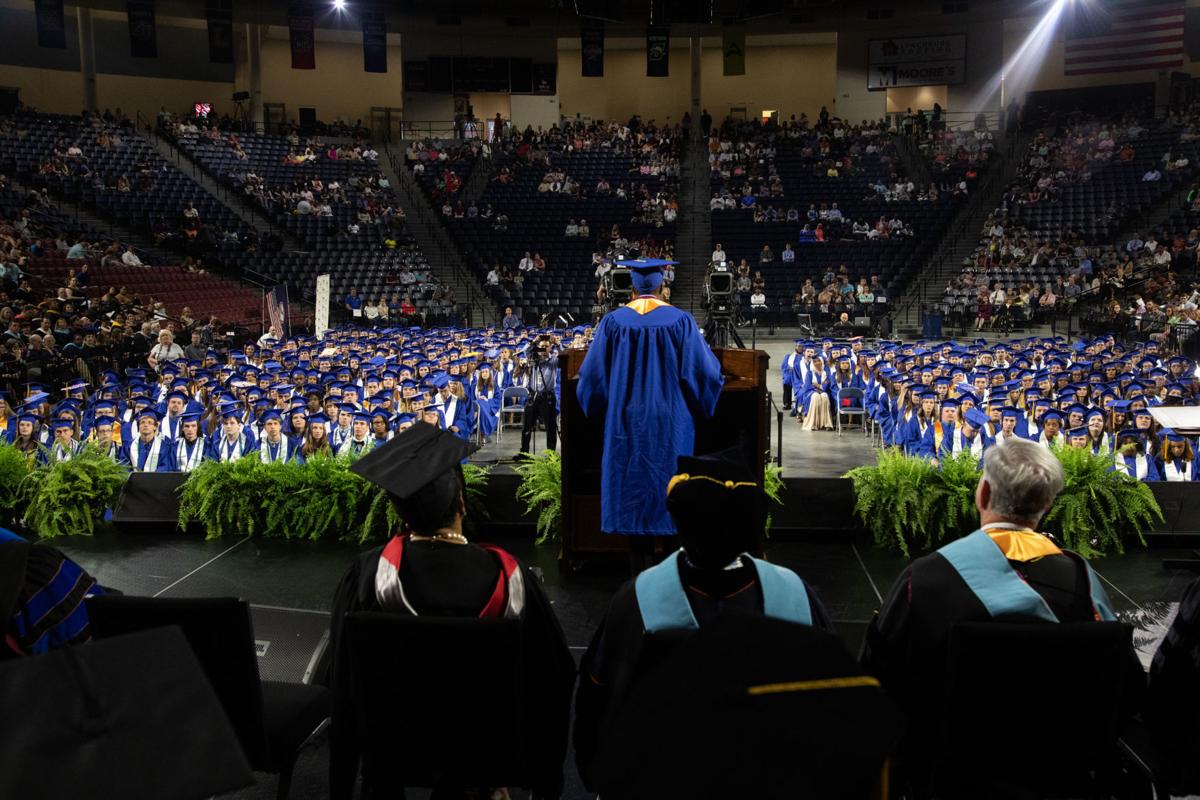 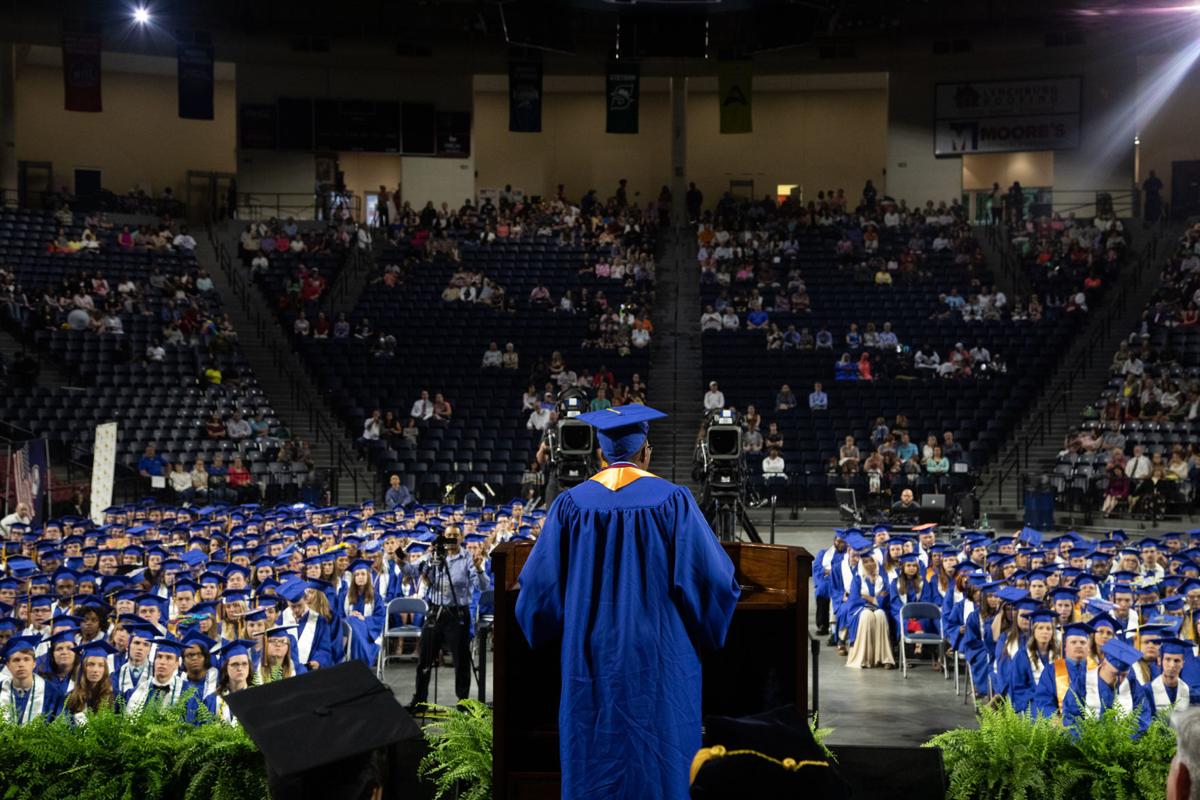 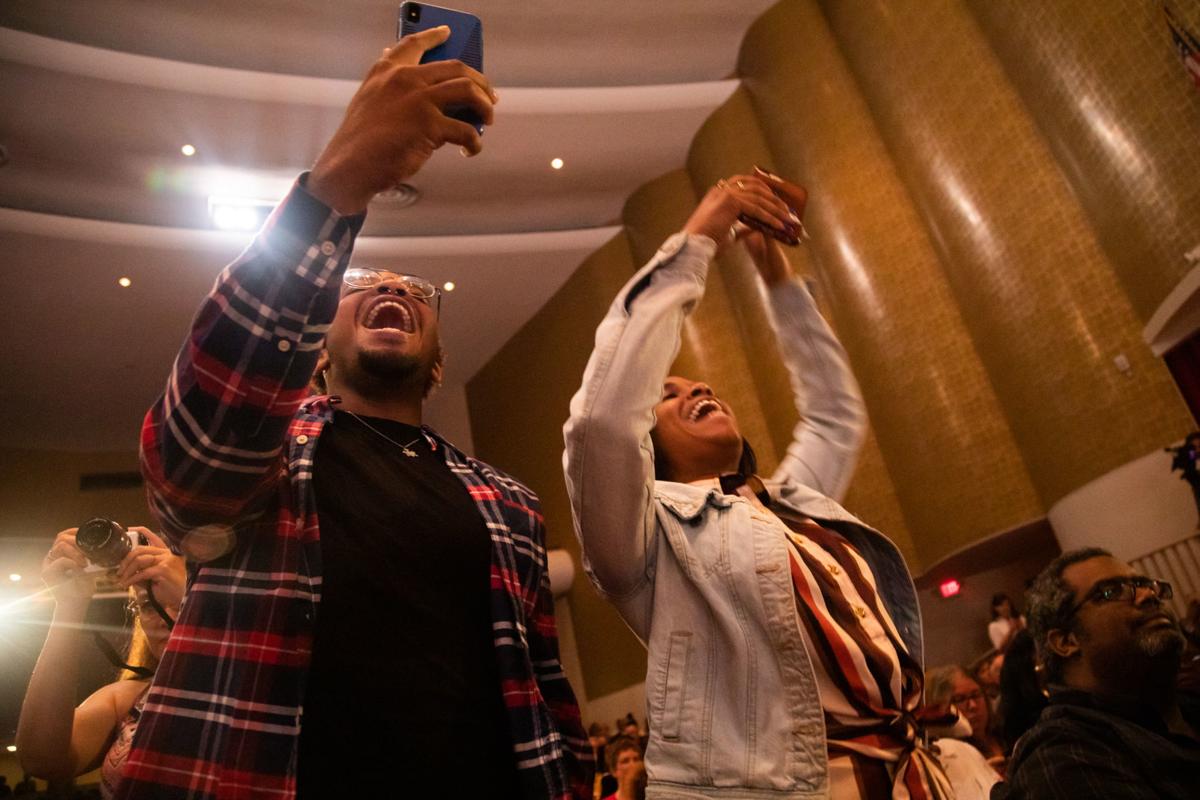 Families and friends of an E.C. Glass graduate cheer as their graduate walks across stage during the commencement ceremony on June 2, 2019 at E.C. Glass High School. 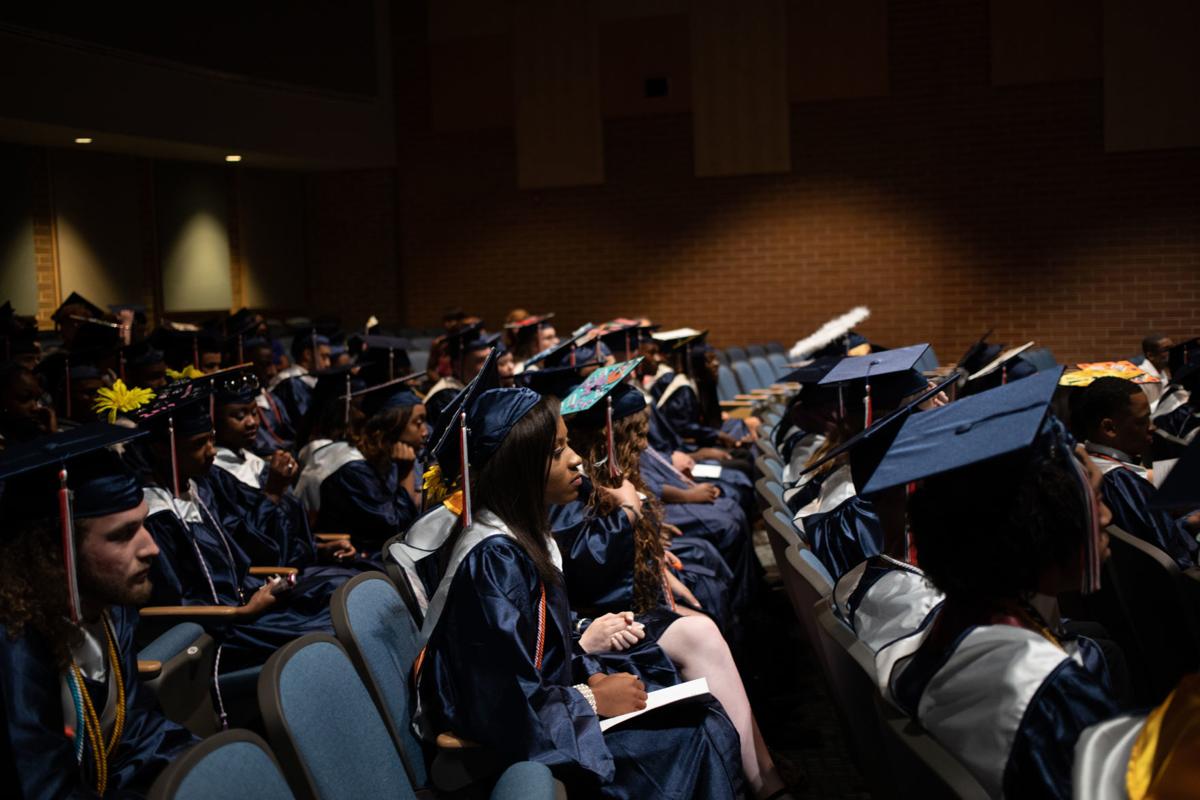 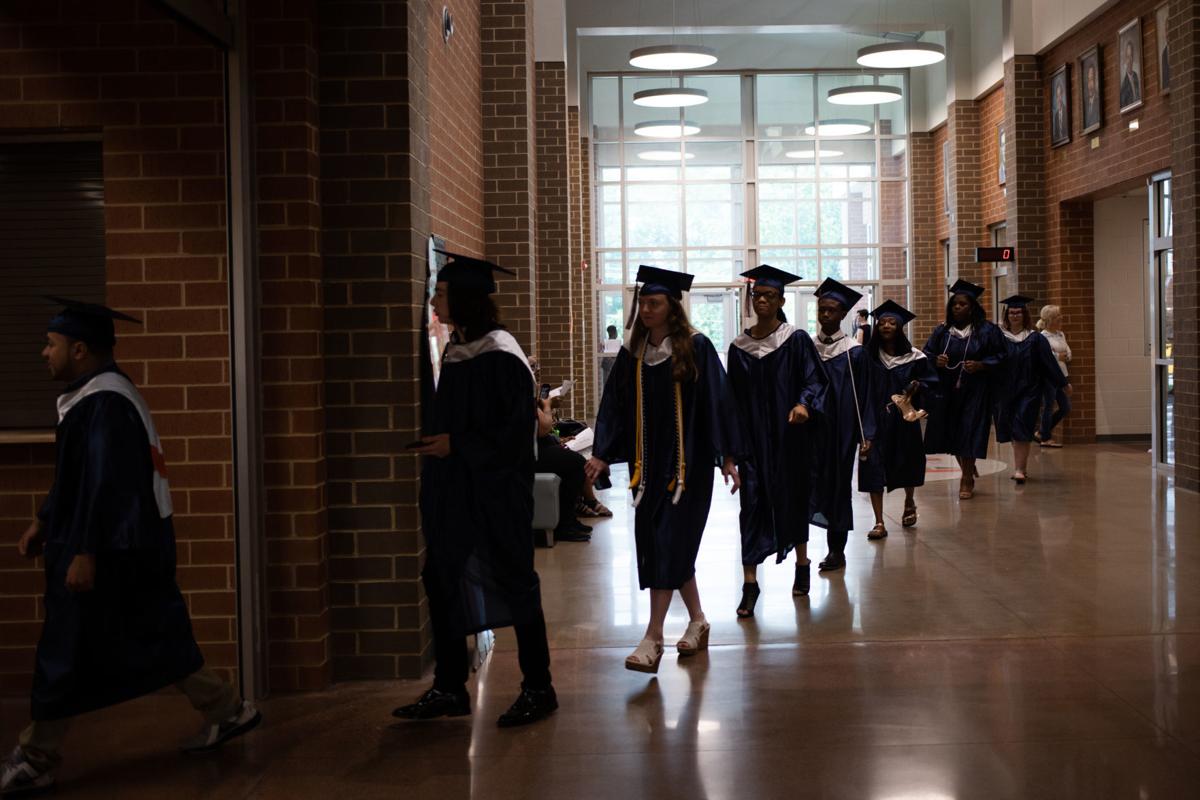 Families and friends of an E.C. Glass graduate cheer as their graduate walks across stage during the commencement ceremony on June 2, 2019 at E.C. Glass High School.

Lynchburg schools officials are attempting to address concerns after the decision to move graduation ceremonies from the city’s public high schools to Liberty University sparked controversy among those uncomfortable with the high-profile Christian institution.

But in the weeks since, students and parents have criticized the decision, saying it ignores Lynchburg’s long-held tradition of intimate graduation ceremonies and the school system’s mandate to keep religion out of public schools.

Some students and parents plan to express those concerns at Tuesday’s school board meeting while others have written to board members asking them to reverse the decision, including Amy Cohen, a mother of two E.C. Glass students.

“I think it’s going to pose some really terrible challenges for some families,” Cohen said of the venue change. “We’re Jewish and it is an extremely uncomfortable place for us to be.”

In an unsigned email to families Saturday, school officials said they would take steps to ensure all graduation attendees would feel welcomed, including covering up religious items. The message also included a pledge to conduct a series of security assessments at the Vines Center.

Liberty has drawn scrutiny in recent months after news outlets reported accusations that University President Jerry Falwell Jr. leveraged the school’s business interests to enrich himself, family members and friends. Falwell, a close confidant of President Donald Trump and a leading figure in the evangelical movement, has denied the allegations.

Despite the controversy, students and parents overwhelmingly approved of the change in a survey conducted by the school system last fall. Several people, however, left written comments denouncing the move, according to survey results obtained by The News & Advance. At least three students threatened to boycott the May 31 ceremony.

“If graduation is held at Liberty I WILL NOT WALK,” one E.C. Glass senior responded in the survey. “[F]alwell encourages guns on campus and consistently makes extremely racist, xenophobic, and anti-Semetic remarks that make me HIGHLY concerned for my safety while on their campus.”

In the survey, one parent described the change as “an insult to any student who does not align with the Liberty ideals” and another said it was inappropriate to hold an event for a public school at a religious institution. The Vines Center, a vast domed arena at the heart of Liberty’s campus, regularly hosts worship services attended by thousands of university students.

Still, the survey of juniors and seniors and their family members showed about three-quarters of the nearly 600 respondents supported moving the ceremony to the Vines Center.

Many pointed to the increased seating and parking offered by Liberty as the reason for their vote. In the past, limited space has forced the schools to restrict the number of guests by providing a handful of tickets to each graduate.

“Please for the love of God and [all] that is holy, move the graduation to the Vines Center,” a parent of a Heritage senior wrote. “Doling out a limited amount of tickets to family is not a fun task and it would be so nice if everyone who wanted to attend, could.”

Lynchburg City Schools spokesperson Cindy Babb said the decision was made by the two school’s principals as a result of the survey. Babb did not respond to questions about the concerns raised by students and parents.

Liberty has long hosted graduation ceremonies for public schools in nearby counties due to its large event space. Central Virginia Community College, which is located across the street from Liberty, also holds its annual commencement exercises in the 10,000-seat building.

“Liberty University is proud to support our local Lynchburg community in a variety of ways, and we are happy to host the Lynchburg City Schools for their graduation ceremonies for the Class of 2020,” Scott Lamb, Liberty’s senior vice president of communications and public engagement, said in a statement. “Because of the ample seating inside the Vines Center, graduates will be able to have all their family members join them on their memorable day of joy.”

The venue change is expected to cost the city at least $8,800, according to emails reviewed by The News & Advance. The two graduation ceremonies are scheduled to occur at different times on the same day. Though Liberty allows firearms on campus, weapons will be barred from the event.

Jennifer Woofter, a member of the school system’s Equity Task Force, which advises the city school board, said officials did not bring the graduation issue to the 26-person committee last year.

“It should have come up in the Equity Task Force,” Woofter said. “It is a big enough decision impacting lots of students and it clearly has a controversial element to it.”

Woofter, a former Democratic candidate for the Virginia House of Delegates and a parent with children in elementary and middle school, said the upcoming graduation ceremonies raise questions about the role of religion in public education.

“I think this is one example of a larger question of when does LCS as a school system partner or engage or collaborate with religious institutions?” she said. “I haven’t ever seen any sort of guidelines. I think every school system needs to have something like that because I think in certain situations it’s appropriate, but in some situations it is not appropriate.”

While high school graduations held there may offer: more seating-we’re talking about stadium seating on a steep angle which can be challenging to those with degrees of physical limitations and phobias; more parking which already includes vehicles for attendees of other graduations thus putting a considerable distance between parking and the venue. LCS staff “say” they will cover Christian symbols to aid in the comfort of their students, Liberty University is a “Christian” school with a “Christian” campus so how is this possible and why should it be. Considering the fact that the exact dollar amount for the high school graduations was not given combined with most of us having never been on Liberty University’s campus nevertheless in the Vines Center, the decision to move both high school graduations seems to have been made simply because neighboring localities, who do not have the facilities anyway, had already did so. When attending graduation ceremonies at the Vines Center keep in mind it was designed and built for the purpose of athletic competition and observation.

“I think it’s going to pose some really terrible challenges for some families,” [Amy] Cohen said of the venue change. “We’re Jewish and it is an extremely uncomfortable place for us to be.”

A nice example you're setting for your children, Amy. At a time when anti-Semitism is spreading like cancer, don't you think you should be teaching your children religious tolerance instead of proclaiming your "extreme discomfort" with Christians?

Those opposed do realize that it is just the use of a building? The state already uses the facilities for various functions, like the football field, music hall and ice center to name a few. I think it's great way to include the community. some people just want to fight and argue about everything.