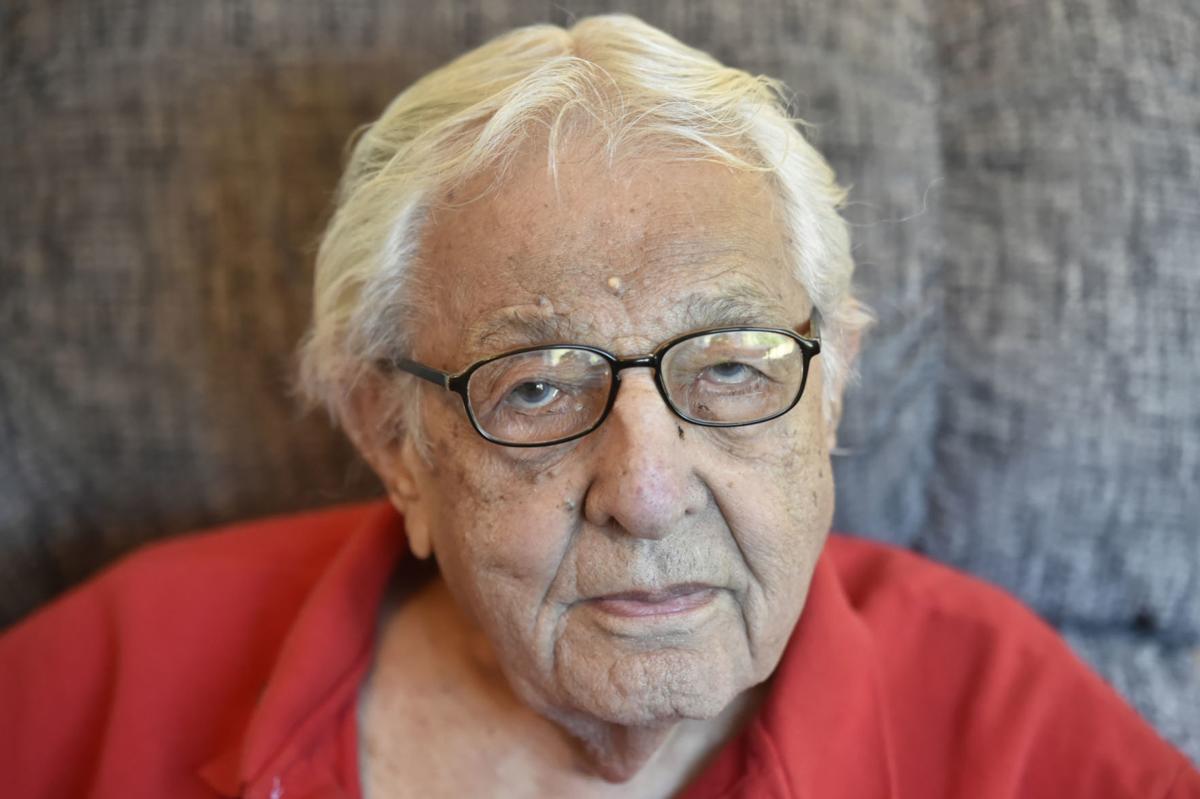 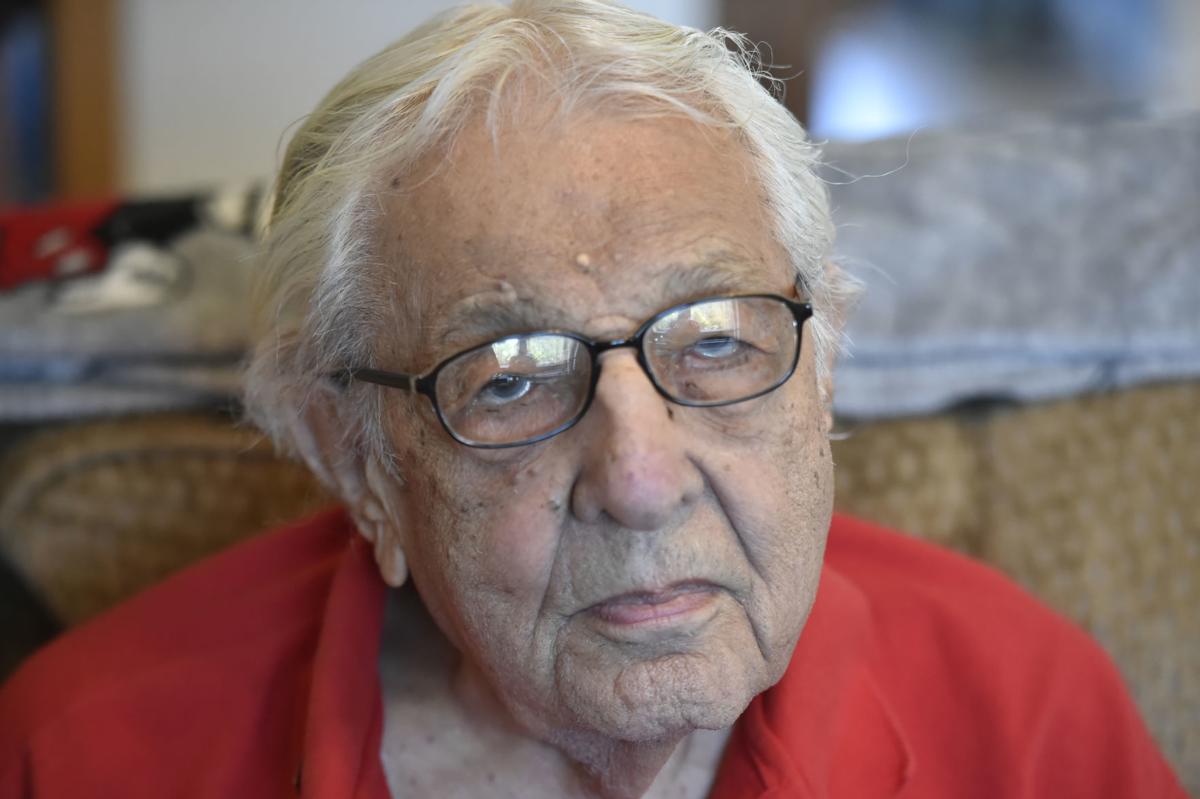 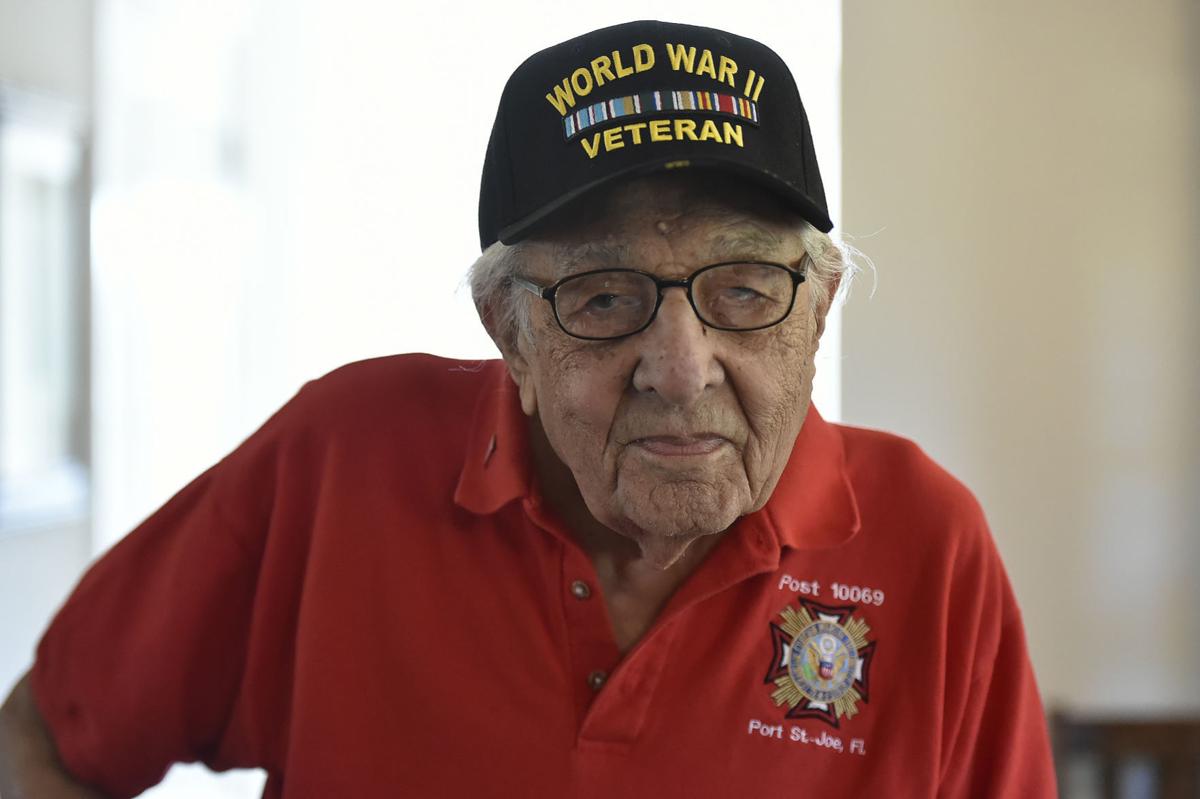 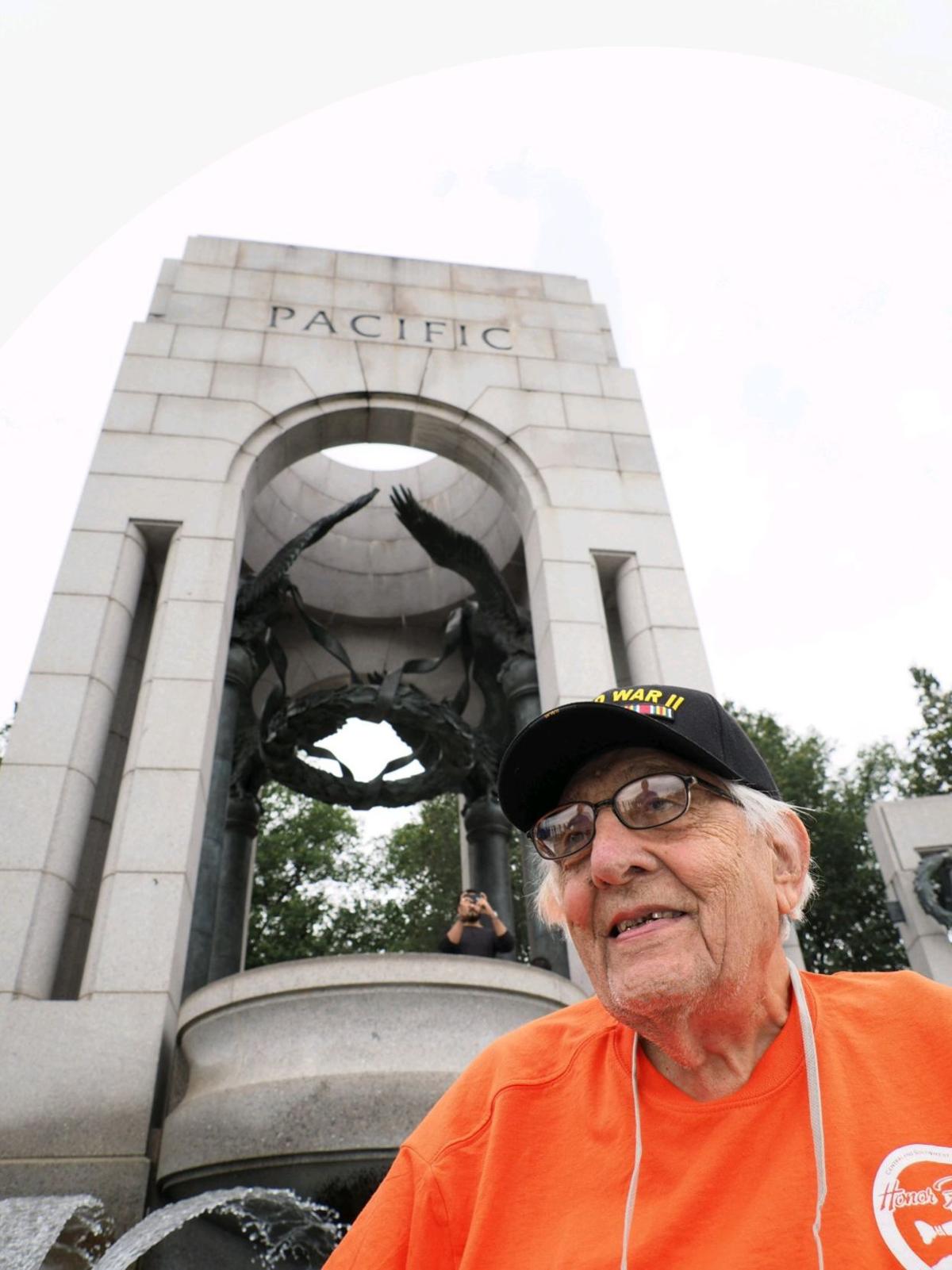 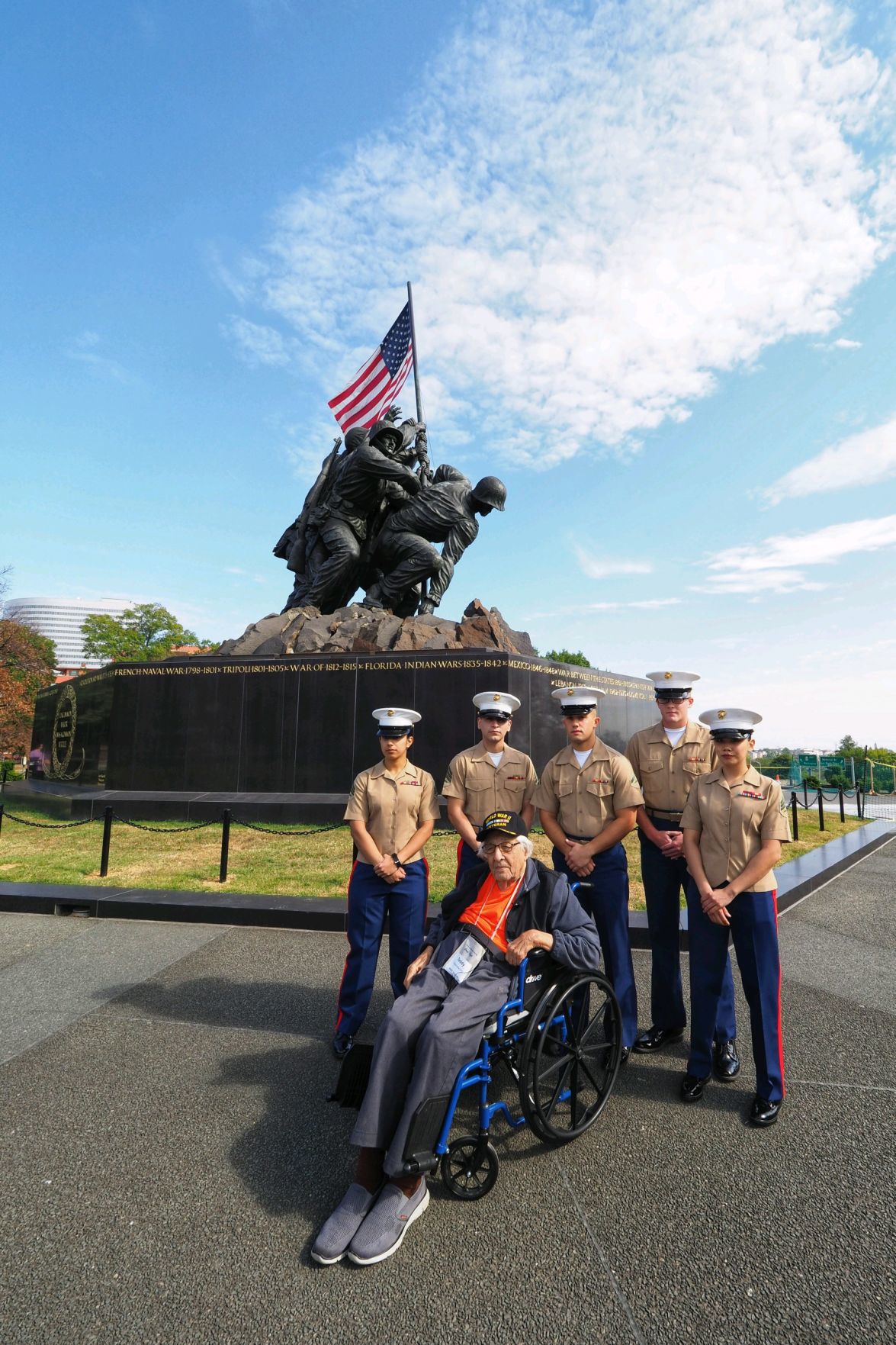 During a recent visit to the United States Marine Corps War Memorial in Arlington, a group of young Marines came up to shake hands with Theodore “Teddy” Mariolis, who served in the Marine Corps during World War II.

Mariolis immediately noticed a large scuff mark on one of the Marine’s otherwise perfectly shined shoes.

“What’s going on with that?” Mariolis sternly asked while pointing at his shoe.

The young sergeant explained that he scuffed his shoe a few minutes earlier while pushing the wheelchair of another veteran who was visiting the memorial. He promised Mariolis that he would fix the problem right away.

The saying “once a Marine, always a Marine” holds true, even when you are 101 years old.

Mariolis, a resident of Forest, was one of 14 World War II, Korean War and Vietnam War veterans who departed the National D-Day Memorial in Bedford on Oct. 11 as part of the Honor Flight Network, a nonprofit organization dedicated to transporting as many United States military veterans as possible to see the memorials of the wars they fought in.

Mariolis said the trip brought back a lot memories of his service in the Pacific Theater during the war.

“I can see faces today and they are just so clear,” he said. “It doesn’t seem that long ago right now. I thank God that he kept me alive long enough to come on this trip. This is really something.”

A native of New York City, Mariolis — the son of Greek immigrants — was drafted into the military shortly after the attack on Pearl Harbor on Dec. 7, 1941, and was sent to the Pacific Theater of the war in 1943 as part of the Marine Corps’ 3rd Division.

“They gave me a choice and I remember wanting to join the Marines because I wanted to fight,” Mariolis said. “The Japanese attacked my country and killed my countrymen. I wanted to go over there and fight them.”

Mariolis was assigned to an anti-aircraft group that was stationed in Guadalcanal and later in Guam. Mariolis said he remembers the Japanese soldiers as “faceless enemies.”

“The nature of the Japanese soldiers was to hide in the jungle and fight and never give up,” he said. “They were told to always fight to the death for their Emperor, even if it meant killing themselves to take out as many American soldiers as they could.”

Mariolis recalled the apprehension he felt one day when a Japanese soldier approached him attempting to surrender to American soldiers.

“A lot of them would pretend to surrender and have grenades under their arms and when they would get close, they would raise their arms and the grenades would fall out and kill them and some Americans,” Mariolis said. “I was shaving one day and in the mirror I see a Japanese soldier coming at me with his arms up. He was naked and already had his hands in the air so I could see that he didn’t have anything on him. That was the only reason I let him approach me.”

In 1945, Mariolis’ anti-aircraft unit was transferred to the island of Tinian, where they were assigned to guard a U.S. Army air base that was conducting bombing missions over Japan.

“I didn’t understand why they had a bunch of Marines guarding an Army base,” Mariolis said. “They had their own guys to do that so it struck me as odd.”

Mariolis found out what his unit was guarding in August 1945 when he learned the war was over.

“One day they told us to pack up because we were going home,” he said. “We were guarding the Enola Gay, the plane that dropped the first atomic bomb on Japan. It made a lot more sense then.”

After the war, Mariolis returned home, met and married his wife of 53 years, and entered into a career in hotel and resort management. He lived in Florida for many years before coming to the Lynchburg area about 12 years ago. Mariolis said he never wanted to return to the islands he served on more than 70 years ago.

Even more than seven decades after the war, Mariolis said he occasionally feels guilt about surviving the war and returning home.

“So many guys didn’t make it and that still gets to me,” Mariolis said. “I keep asking ‘why me?’ Why did I make it out? Look at the Bedford Boys, where two-thirds of the guys that left never came back. The magnitude of loss will always bother me.”

However, Mariolis said his only regret is “not being 10 years younger” so he could get out and advocate for the U.S. to withdraw its troops from Iraq and Afghanistan.

“I would be in Washington, D.C., banging on every door I could telling the government to bring our people home,” Mariolis said. “There is nothing in Afghanistan we need. We don’t need to lose anymore people over there.

“That is what I want to say to the politicians in Washington,” he said. “No more ... not one more. Bring them home.”