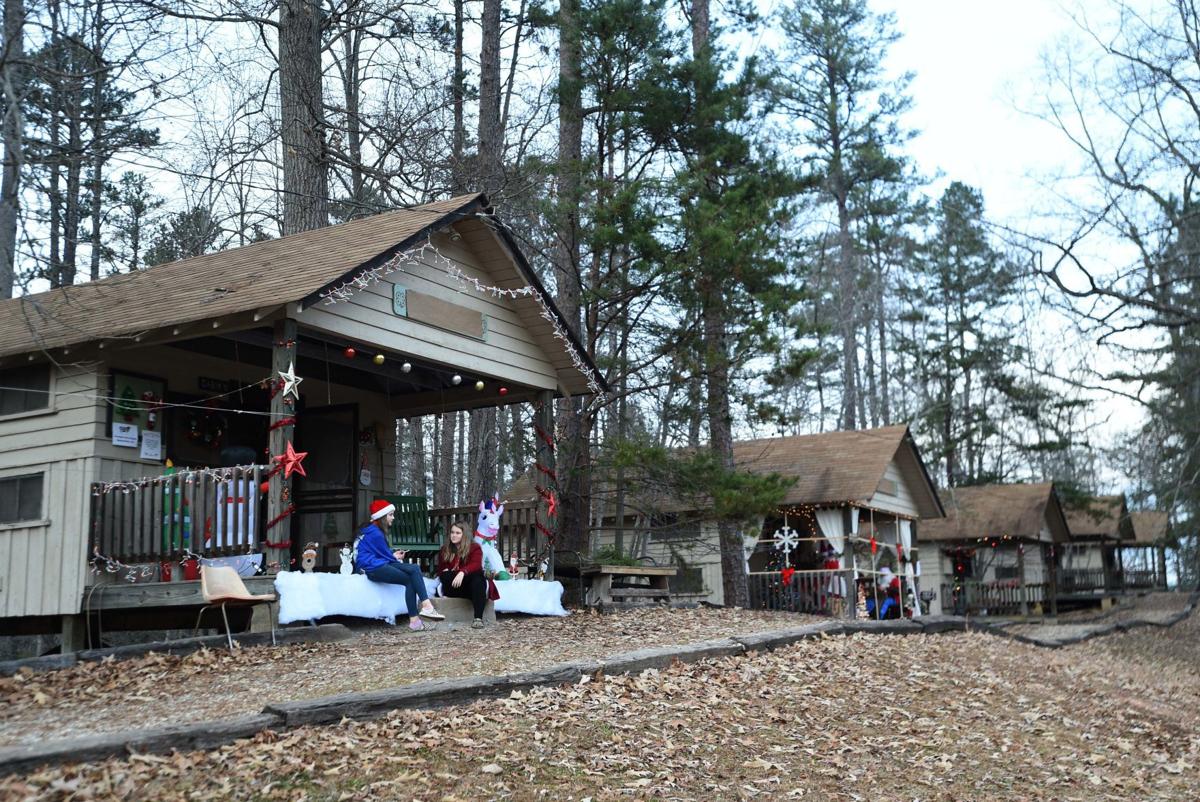 Cabins at a holiday open house at Holiday Lake 4-H Educational Center in Appomattox on Dec. 6, 2019. 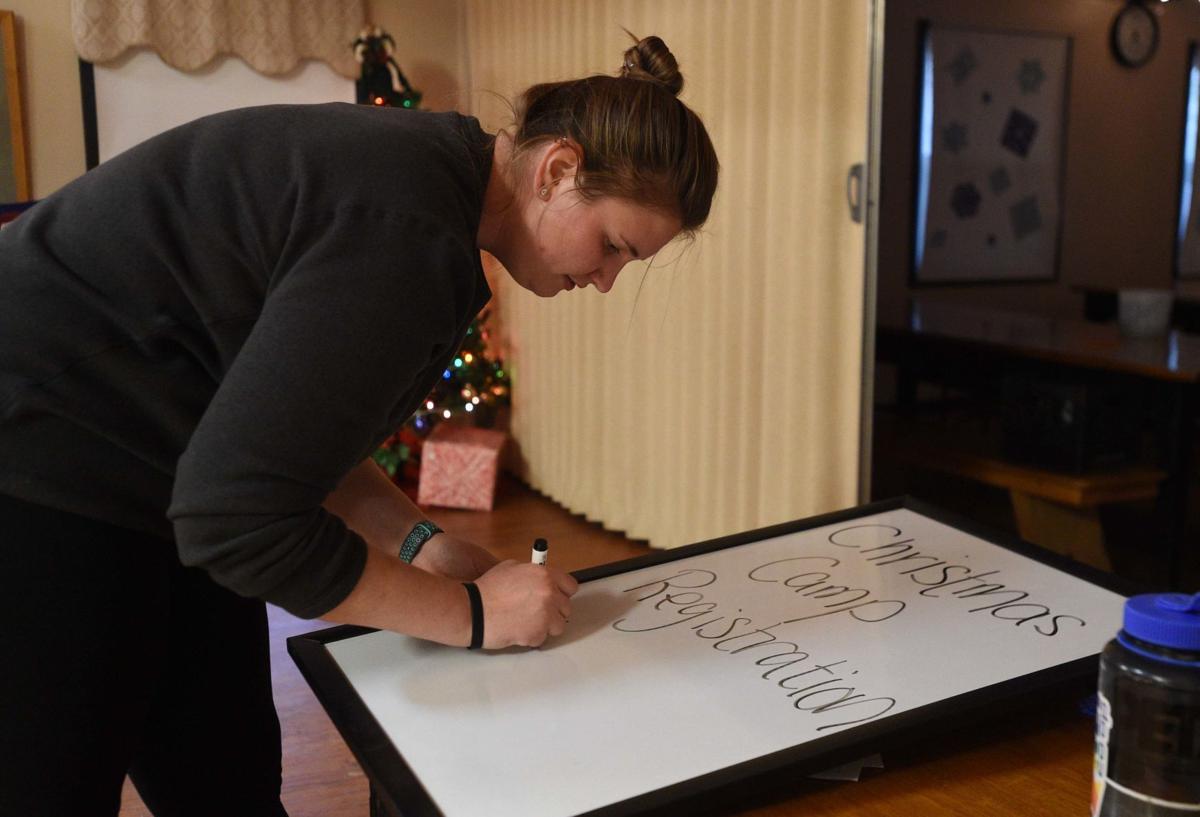 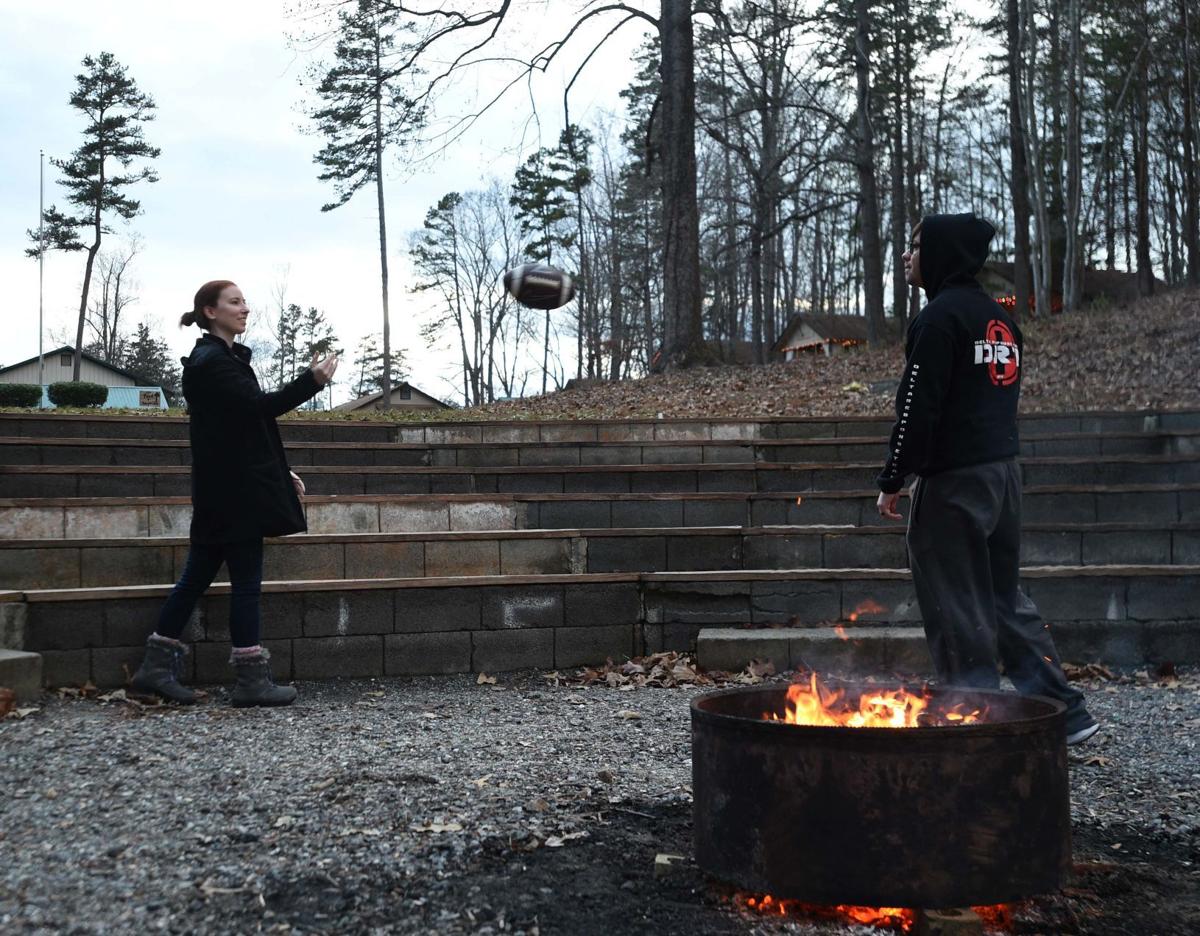 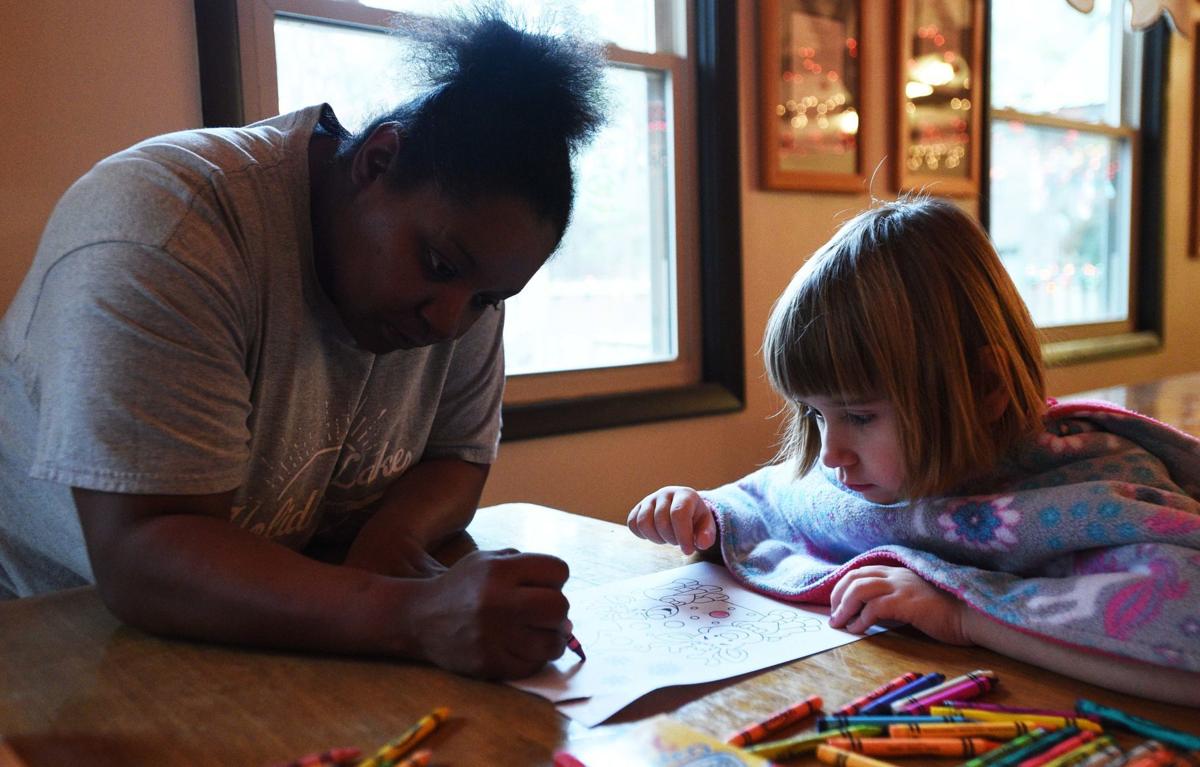 Monica Walker, night-shift head cook for the center, colors with Jackie Freeman, 4, of Appomattox during a holiday open house at Holiday Lake 4-H Educational Center in Appomattox on Dec. 6, 2019. 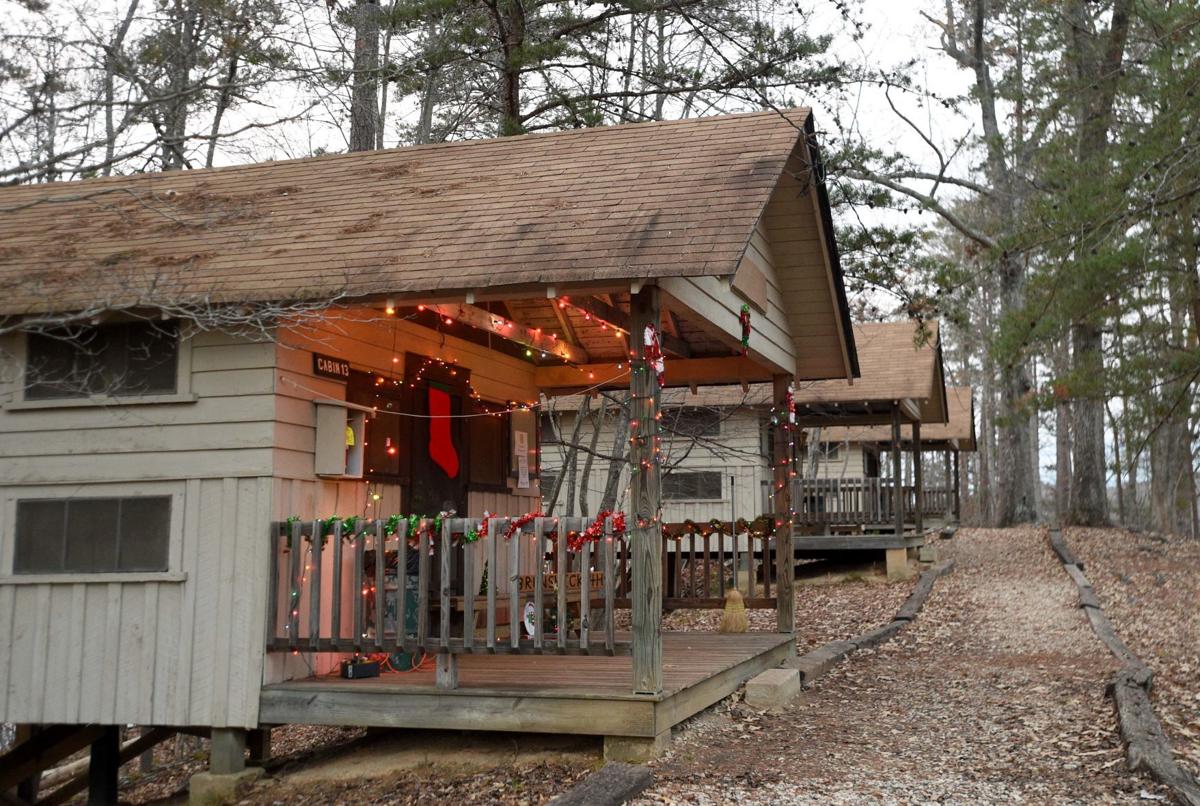 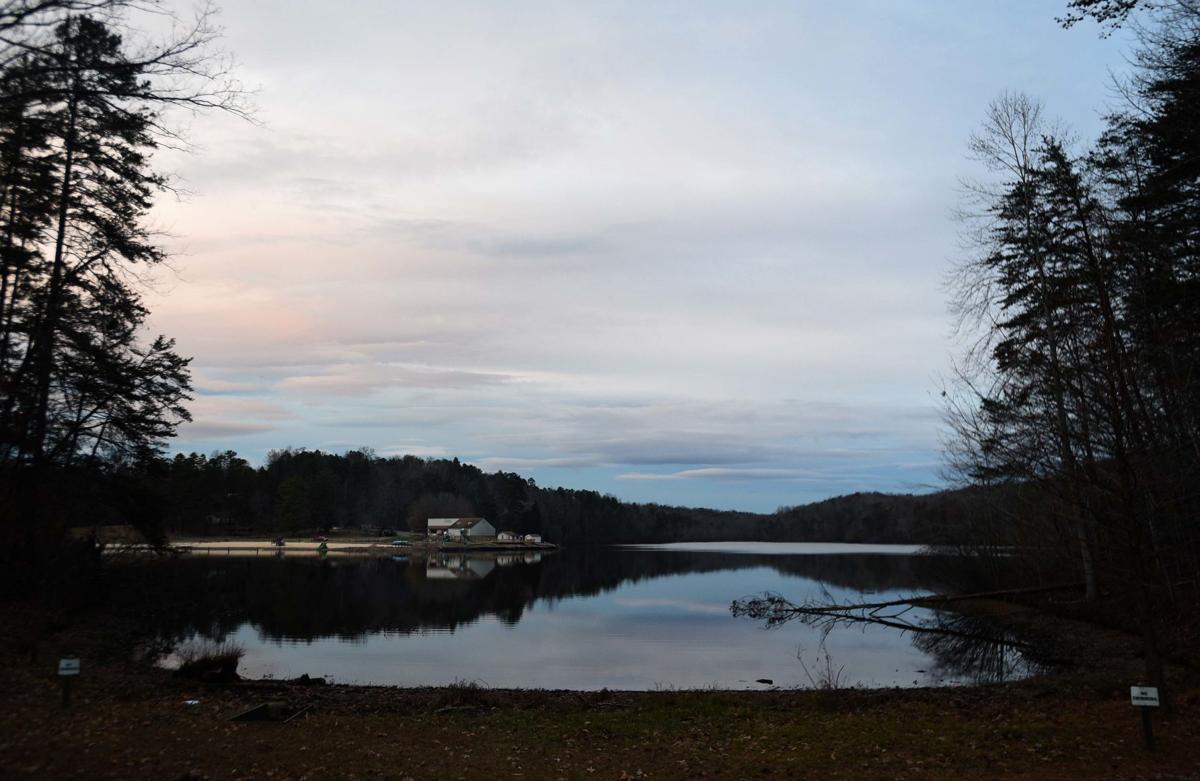 A view from the Holiday Lake 4-H Educational Center in Appomattox on Dec. 6, 2019. 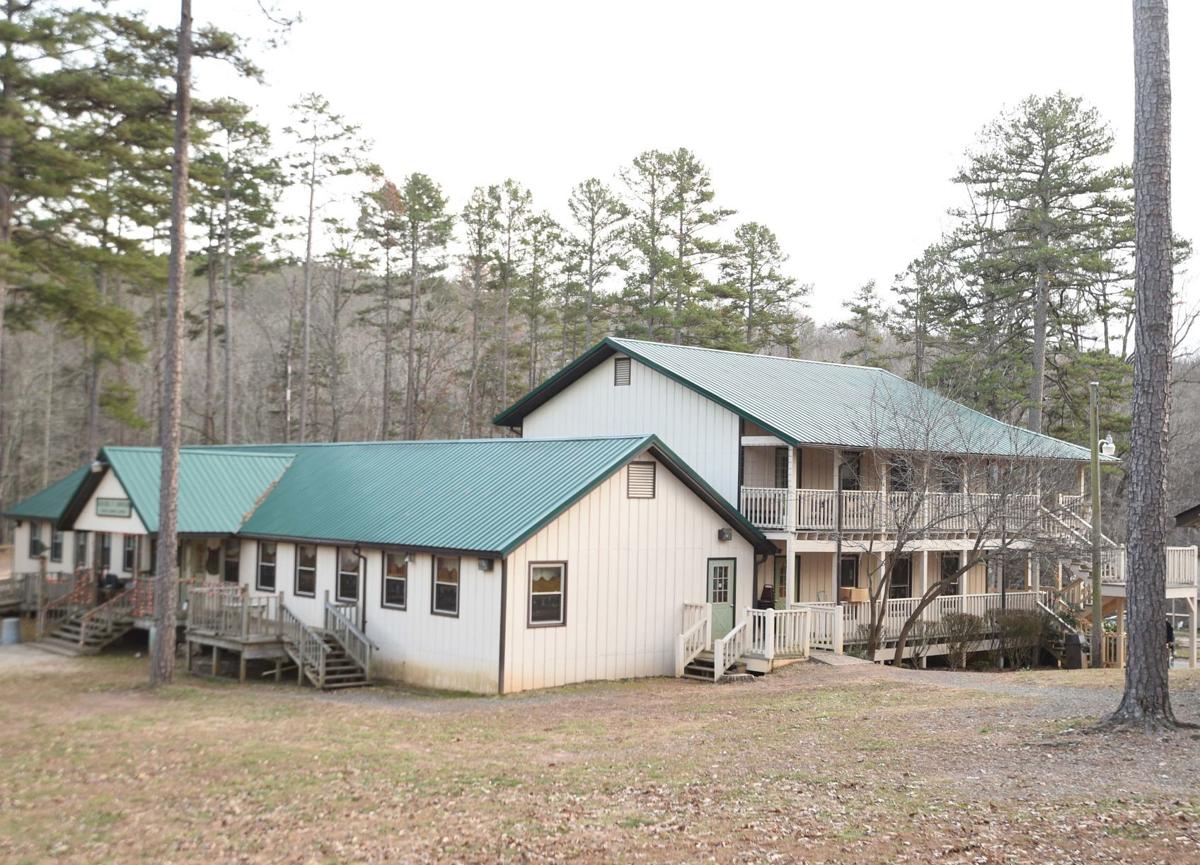 The main hall of Holiday Lake 4-H Educational Center in Appomattox on Dec. 6, 2019. 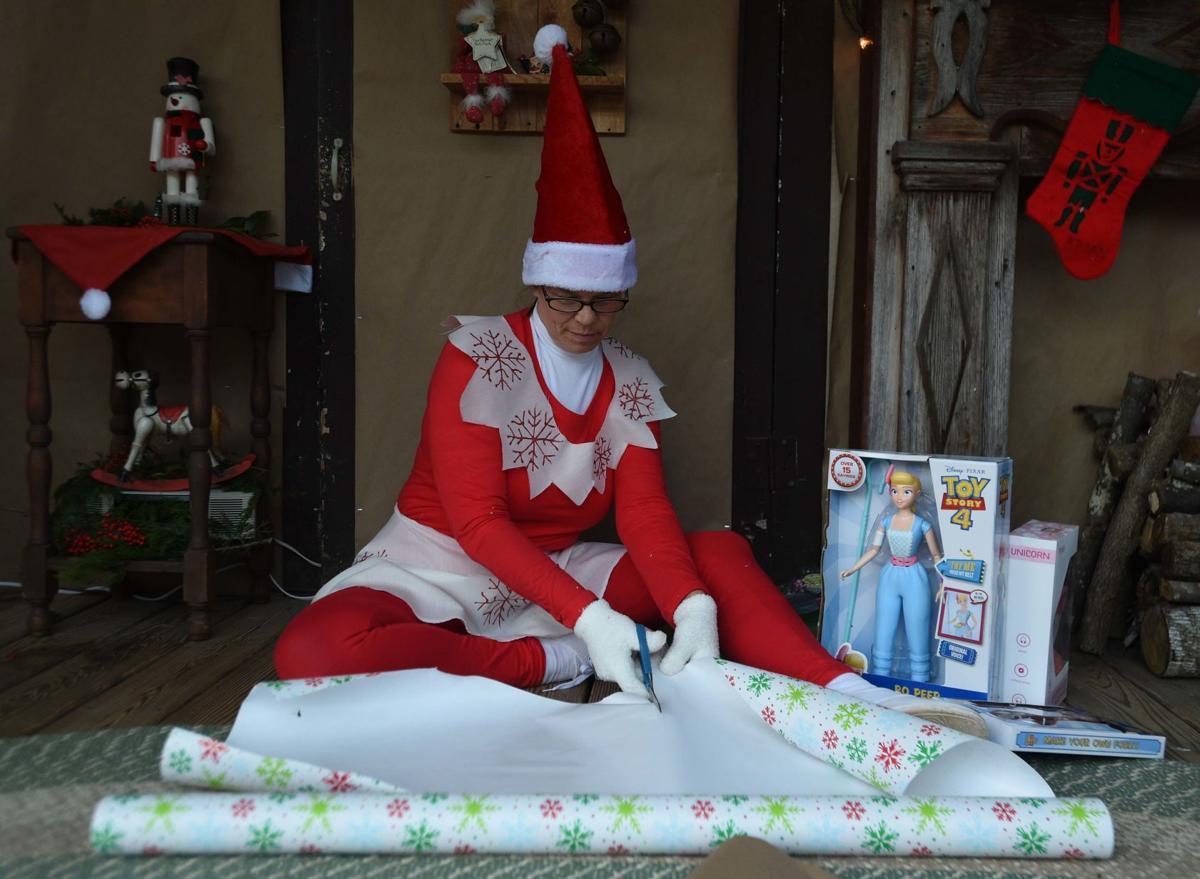 Tammy Stalker, of Pamplin, a cook for the 4-H center, wraps gifts at a holiday open house at the Holiday Lake 4-H Educational Center in Appomattox on Dec. 6, 2019.

Cabins at a holiday open house at Holiday Lake 4-H Educational Center in Appomattox on Dec. 6, 2019.

Monica Walker, night-shift head cook for the center, colors with Jackie Freeman, 4, of Appomattox during a holiday open house at Holiday Lake 4-H Educational Center in Appomattox on Dec. 6, 2019.

A view from the Holiday Lake 4-H Educational Center in Appomattox on Dec. 6, 2019.

The main hall of Holiday Lake 4-H Educational Center in Appomattox on Dec. 6, 2019.

Tammy Stalker, of Pamplin, a cook for the 4-H center, wraps gifts at a holiday open house at the Holiday Lake 4-H Educational Center in Appomattox on Dec. 6, 2019.

In the middle of the present-day 20,000-acre Appomattox-Buckingham State Forest are the remains of an aborted U.S. Navy project — a 150-acre lake constructed during the Roosevelt administration in the 1930s, intended as a location to land amphibious planes in the event of an attack on the Capitol.

An unearthed cemetery waylaid the project.

The lake, and the Works Projects Administration (WPA) cabins constructed on its shore, were left abandoned.

Now, more than 80 years later, the lake and the same cabins and facilities intended for the WPA’s use, serve more than 10,000 people per year as the Holiday Lake 4-H Educational Center.

With the unprecedented backing of 19 localities — including Appomattox, Amherst, Campbell and Nelson counties and the city of Lynchburg — the 4-H center is requesting $332,000 from the Virginia General Assembly for essential capital safety improvements in the 2020 biennial budget.

Some of these improvements, like accessibility improvements related to the Americans with Disabilities Act, a wireless PA system and roof and gutter replacements on the WPA cabins, could help the camp keep up with times, advancing a little further from its 20th century roots.

President and CEO of the center, Preston Willson, said this is the first time in memory all of the localities have rallied behind the camp. Though they requested money last year as well, the funds didn’t come through. If approved, this would be the first funding received from the General Assembly in about a decade.

“This is a special occasion,” Willson said. “We’ve got a list of things that need to addressed. ... This is the first time that we have gone to all of our camping counties for support.”

Across Central Virginia, resolutions in support of the center’s request were approved by local leadership, like the Amherst County Board of Supervisors, which approved the resolution in October.

During the meeting, Amherst County Supervisor David Pugh said he learned to canoe and shoot rifles and bows while at 4-H camp there and recalls it being his first time away from home as a child.

Willson said they will take the resolutions of support to Del. Matt Fariss, R-Campbell County, and Sen. Mark Peake, R-Lynchburg, and hope it garners “a little more firepower” in Richmond.

While the 4-H camper fees provide for a little more than 40% of the total expenses, according to Willson, the rest they must raise on their own, through programming and fundraising. Without the funds from the General Assembly they will survive, but it means necessary projects could only be done one at at time, over a period of years.

It is vital the camp continues, Willson said. Many of the campers who come to the 4-H summer camp never have been away from home before. Willson remembers his own experience at 4-H camp as a child, and called the 4-H pledge one of the most important things in his life. Central to the 4-H program, the pledge dedicates a camper’s head, heart, hands and health to help the community.

“When they grow up they are going to remember the things that they learned at 4-H camp,” Willson said. “It’s a life changing experience in the right way, in a world that doesn’t have a lot of right ways sometimes.”

He called it a chance for growth, to allow children to experience outdoor adventure and environmental education. Willson said he once had a camper who never had seen a squirrel until they came to 4-H camp.

With no cell reception, and nestled on the more than 150 acres leased from the Virginia Department of Forestry, the center has been a getaway for thousands of campers since it was established in 1941.

On an evening in early December, the old WPA cabins were trussed in string lights and holiday decor, candy cane forests and faux-cotton snow blanketing the cabin porches. For the first time, the annual kick-off of “Christmas Camp” was preceded by an open house — a chance for the community to see the decorated, historic cabins, and enjoy a bonfire, hayrides and games.

Karen Sleigh was sitting on the front porch of the dining hall before the festivities began. She said her daughter started going to camp at Holiday Lake when she was 9 years old. Since then, she never missed a summer.

Now, her daughter, Heather Benninghove, is the center director at Holiday Lake.

“To me, it’s Heather. In my mind, in my heart, this is Heather. That’s what this place means to me,” Sleigh said. “I don’t think you can even really put into words what it means. It’s a feeling.”

She helps out in the kitchens when she can, and firsthand has seen some of the needs the camp is facing.

“They have to jury-rig a lot of stuff because they don’t have the funds for it if something breaks,” Sleigh said.

Benninghove reiterated the need for the funding.

She said it is essential to maintain the current facilities, so that her children, and their children after them, can keep coming to the camp. Much of the needed maintenance is to the general infrastructure, like the PA system. She said it “works when it feels like it,” and has since she was coming to the camp in the 90s.

Benninghove started on the summer staff when she was in college. After that first summer on the staff, she changed her major and colleges, so she “could do it forever.” She even got her master’s in parks, recreation and tourism management.

“When I found out you could do it as a real job, I was like: ‘Heck yeah, sign me up,’” Benninghove said.

She said with the facility being an old WPA camp, there are a lot of general infrastructure needs. Since much of her program is grant funded, the money cannot cover maintenance and upkeep.

“There’s a lot we can benefit from, especially from an education standpoint,” McIver said. “I think a lot of that is super important, just to keep us afloat.”

Center Program Director Levi Callahan said the updates will bring them into the 21st century.

“We want to allow people to continue enjoying this place; we don’t want it to break down,” Callahan said.

With a major $1.75 million project on the horizon, the General Assembly funds would help to maintain the day-to-day infrastructure while fundraising efforts are concentrated around the proposed Benneche Family Center, an expanded shooting and archery range and multipurpose space.

As the top ranked 4-H shooting facility in the state, shooting education is paramount to the center.

Cindy Morris, development and marketing assistant for the center, said she has worked in local government for 30 years. Seeing all 19 localities come together behind a common goal was a “real feat,” and unlike anything she had seen before.

As a teenager in the 70s, she attended camp at Holiday Lake. Her uncle, Wilbur St.John, attended in the 1940s.

St.John was at the Christmas Camp open house in December. He wandered the leaf-strewn dirt path that flanked the cabins, and tried to pick out the one that he stayed in more than 75 years before.

He said he looked forward to attending camp every summer. Now, at 86, he only lives a stone’s throw from the property.

It’s the memories, he said, that keep him coming back.