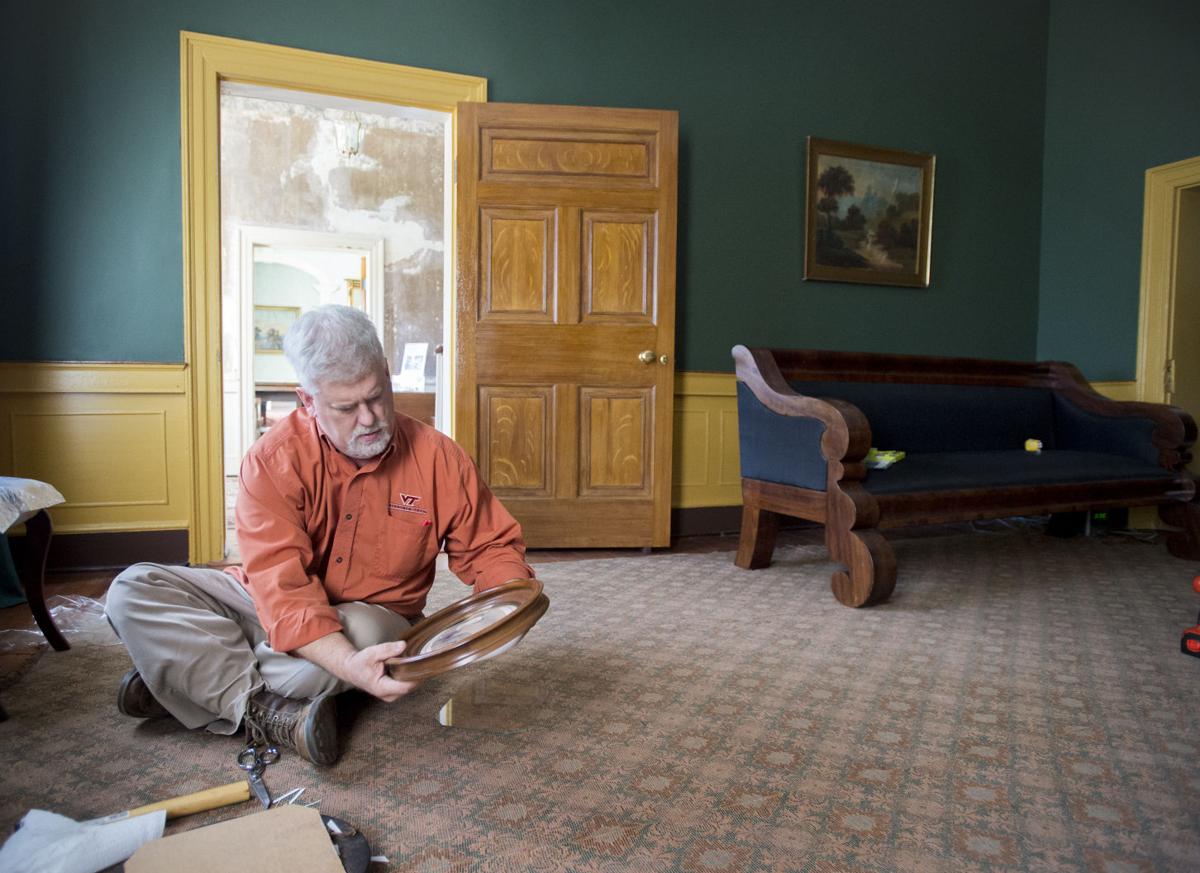 Greg Starbuck, executive director of the Sandusky House, reframes a portrait of Edward and Emma Hutter on Friday in the newly renovated east parlor. Edward Hutter was brother to George Hutter who lived in the house during the Civil War. Photo by Jill Nance 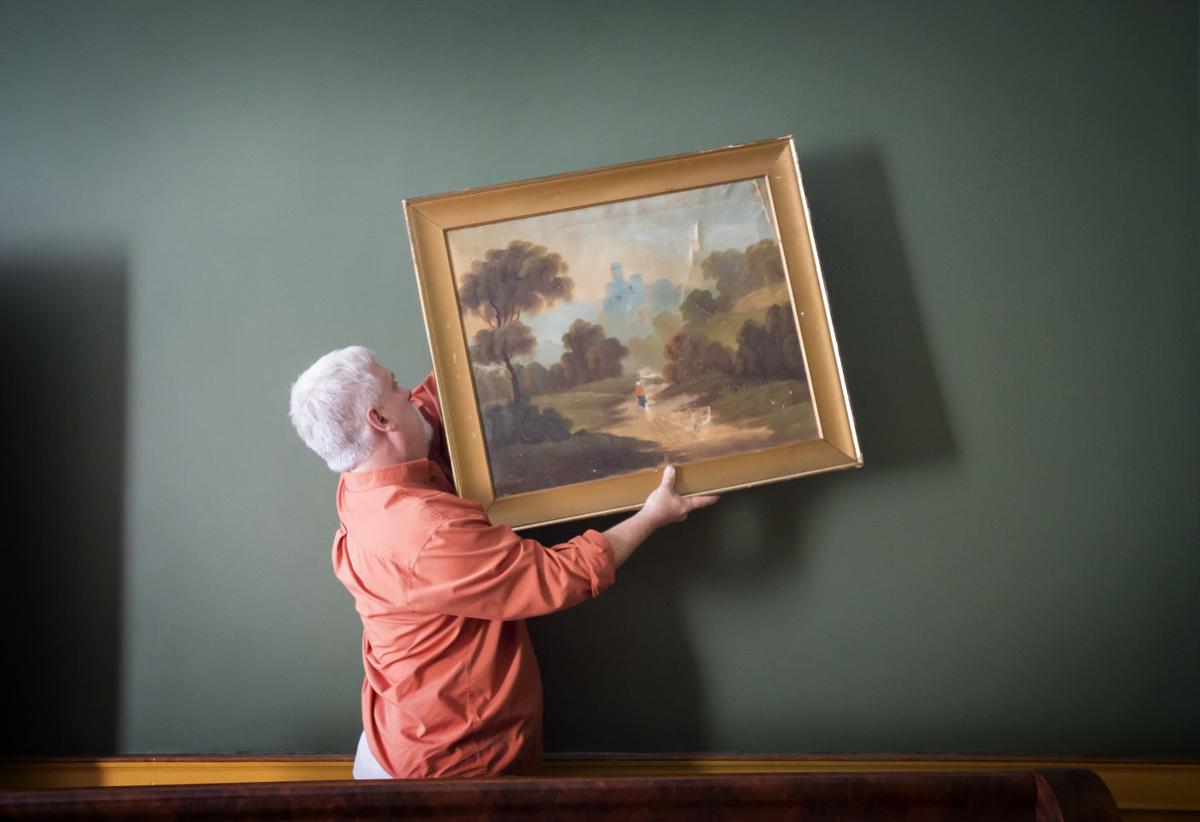 Greg Starbuck hangs a painting in the newly renovated east parlor on the Sandusky House on Friday. The painting, original to the house, is believed to have been slashed by Union Soldiers during the Civil War. Photo by Jill Nance

Greg Starbuck, executive director of the Sandusky House, reframes a portrait of Edward and Emma Hutter on Friday in the newly renovated east parlor. Edward Hutter was brother to George Hutter who lived in the house during the Civil War. Photo by Jill Nance

Greg Starbuck hangs a painting in the newly renovated east parlor on the Sandusky House on Friday. The painting, original to the house, is believed to have been slashed by Union Soldiers during the Civil War. Photo by Jill Nance

Like paint being scraped away from walls, so too is the Historic Sandusky Foundation peeling back layers of time.

A piece of those efforts will be revealed Friday, when the recently-restored East Parlor of the Sandusky house will be unveiled during a grand opening reception.

Built in 1808, Sandusky served as the headquarters for Union officer Maj. Gen. David Hunter during the Battle of Lynchburg in 1864.

The Historic Sandusky Foundation purchased the property in 2000. The Federal-style Sandusky house is listed on the Virginia Landmarks Register and the National Register of Historic Places.

In its desire to return the home to its appearance during the 1850s, restoration of the house began with the building’s exterior. Moving inside, the formal west parlor was restored last year.

Next week’s reveal focuses on the less-stately but more intimate East Parlor, a room that once served as a family room. Funding for the renovations was made possible through donations from the Hutter family. The home was owned by Maj. George C. Hutter during the Civil War.

Throughout the restoration process there has been a quest for historical accuracy.

“It’s my belief that the little details are nuances that you might not even consciously think about, but subconsciously they are telling you something … and the more accurate that is, the better you are willing to receive the story and the connection to the past.”

In restoring the home, the foundation commissioned a historic structure report “sort of an autopsy if you will,” said Greg Starbuck, Historic Sandusky Foundation executive director. A paint analysis provided a microscopic look at the various strata of paint that line the walls.

Interviews with descendents, including the grandchildren of the Civil War-era inhabitants, provided insight into details such as the placement of furniture.

The Historic Sandusky Foundation has partnered with Lynchburg College, and student interns sifted through letters to find “the smallest clue” as to the home’s interior design.

“Usually most family letters would write about ‘what mother’s doing, what father’s doing, what the kids are doing,’” Starbuck said. “They don’t often say ‘we painted the room green.’ You wish they would, but they don’t. But they do have little clues in the letters.”

Like other rooms in the house, the East Parlor also is filled with furnishings that were original to the home, such as a hand-woven carpet. The walls are painted a deep shade of green that would have been familiar to Hutter family who occupied the home during the 1850s while family portraits and landscapes will be reproduced to hang in the room.

With the two front rooms completed, the next plan of action involves restoration of the foyer. After that point, the foundation will assess what else needs to be done, Starbuck said.

“We’ve waited years to get to this point,” Starbuck said. “This is the fun part of [restoring] a historic house.”

Tickets: $25. Tickets can be purchased at Historic Sandusky or online at www.historicsandusky.org or call (434) 832-0162. Includes hors d’oeuvres, beer/wine, silent auction and music.

A home once held by Union soldiers during the Battle of Lynchburg is set to become the property of Lynchburg College.

History buffs work to maintain Historic Sandusky for next generation