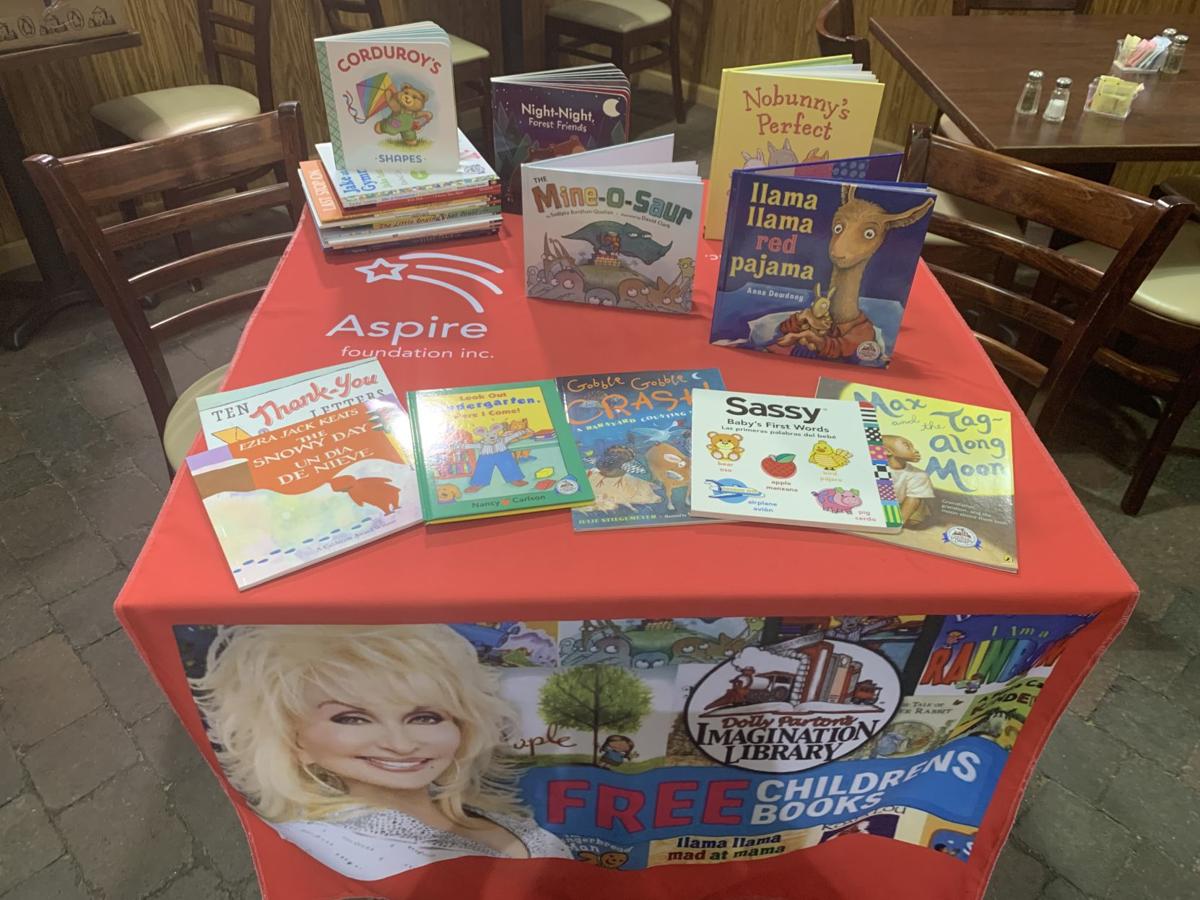 A display shows examples of some of the books from the Dolly Parton Imagination Library. 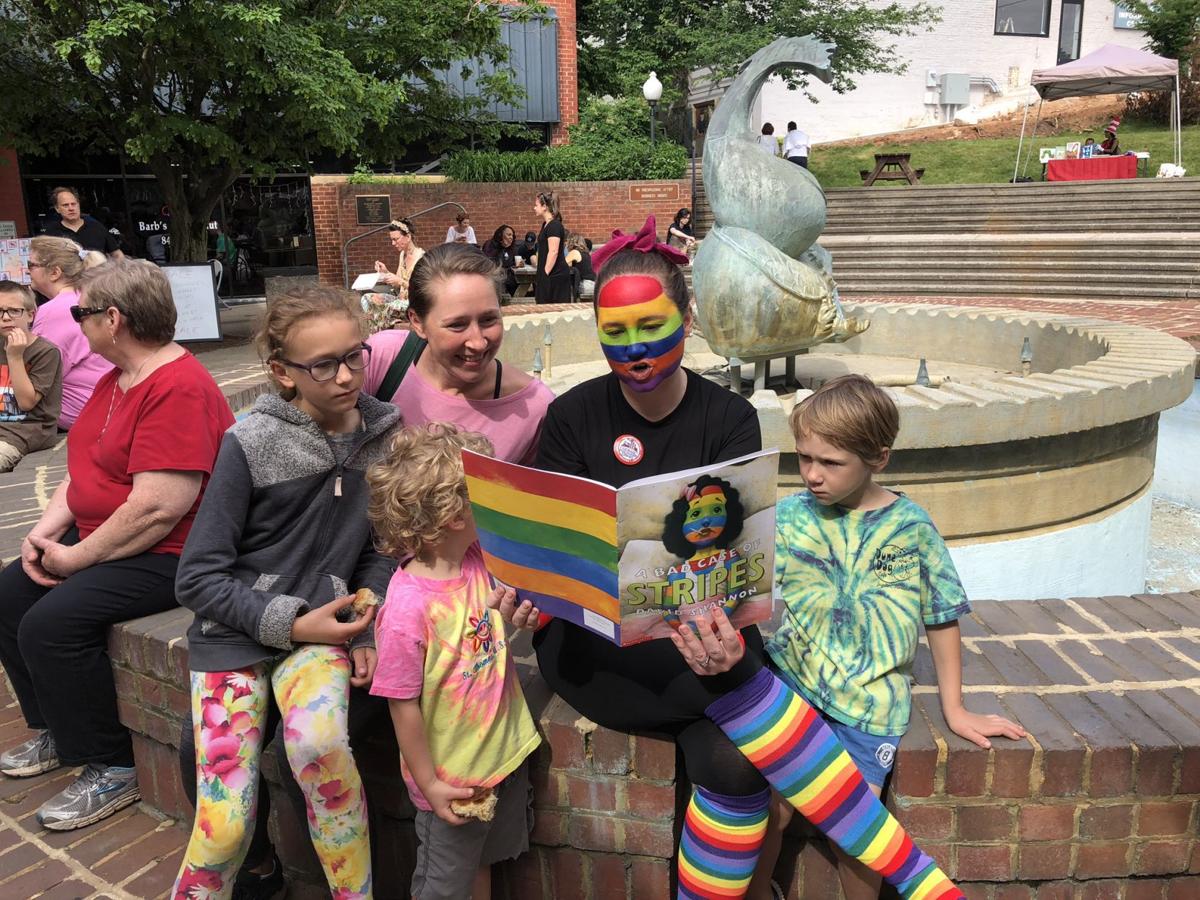 Aspire Foundation Board Member Megan Huffman reads a book with Kristen O'Neil and her children, Alayna, Colin and Zachary at a promotional event "Reading with Storybook Characters" at the Lynchburg Community Market in May. Courtesy of Mary Omotoye. 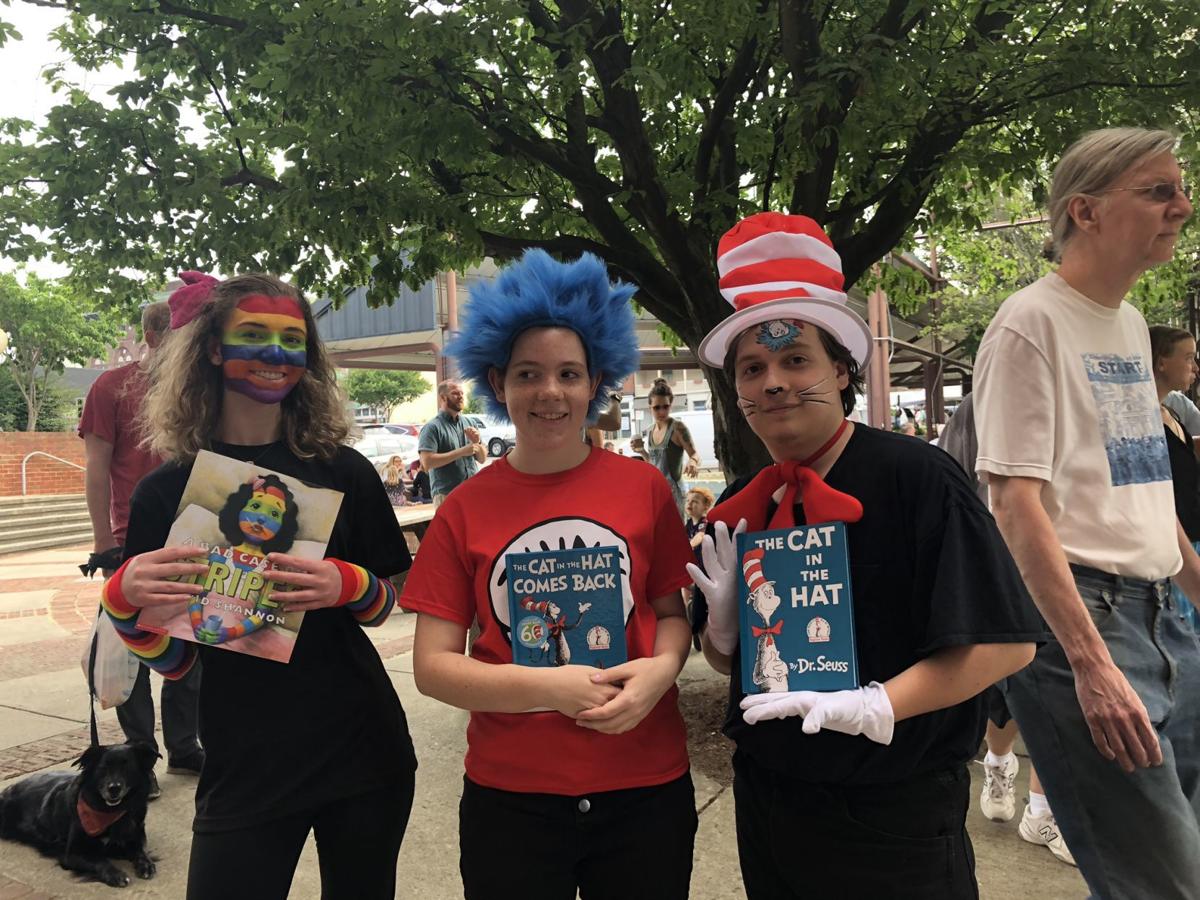 Connor West, Cassandra West and Julie Piercy at a promotional event "Reading with Storybook Characters" at the Lynchburg Community Market in May. Courtesy of Mary Omotoye.

A display shows examples of some of the books from the Dolly Parton Imagination Library.

Aspire Foundation Board Member Megan Huffman reads a book with Kristen O'Neil and her children, Alayna, Colin and Zachary at a promotional event "Reading with Storybook Characters" at the Lynchburg Community Market in May. Courtesy of Mary Omotoye.

Connor West, Cassandra West and Julie Piercy at a promotional event "Reading with Storybook Characters" at the Lynchburg Community Market in May. Courtesy of Mary Omotoye.

A new initiative addressing social barriers to literacy for children is launching next week and will provide new, free books for children under the age of 5 in certain areas of the city.

The program is put on by local nonprofit the Aspire Foundation in partnership with the Dolly Parton Imagination Library.

The Aspire Foundation was founded in 2018 by Mary Omotoye and her husband, Samuel.

The foundation’s mission is to give children from all walks of life opportunities to recognize and optimize their potential. Its first and primary endeavor is starting Lynchburg’s own Dolly Parton Imagination Library (DPIL), which will launch Tuesday during a one-time event at the Lynchburg Public Library.

Together, the partnership provides free, high-quality books to children from low-income neighborhoods in zip codes 24501 and 24504.

Omotoye said in researching the 2017 U.S. Census and in speaking to people within the city, the areas of most need were in those ZIP codes.

The books are personalized with the child’s name and mailed every month directly to their home.

Omotoye said with 5,000 children ages 5 and younger in Lynchburg, her goal is to eventually reach the entirety of the city.

DPIL is a large, international book-gifting program for children who are younger than 6 years old. By the time the child turns 6, they could have a library of up to 60 books.

Omotoye said the books are chosen by a panel of childhood experts. The books are developmentally appropriate for each age group and are fulfilled by Penguin Random House.

DPIL provides the administration, book order database, book selection and fulfillment at no cost, Omotoye said, and the foundation enrolls children, promotes the DPIL program and raises money for the books.

Aspire Foundation pays DPIL $2.10 per book, which includes mailing costs. The cost of the program for one child is $25 annually and the cost of the full five-year program is $125. The money is raised mostly through grants from Centra Foundation, Schewel Charitable Foundation and Greater Lynchburg Community Foundation as well as from individual donors.

The fundraising goal — which has just about been met — is $25,000, which will pay for two years of books for 700 children in the 24501 and 24504 areas. Omotoye came up with these numbers based on her research with the U.S. Census and DPIL cost estimator tools.

Partners such as Miriam’s House, the YMCA, Jubilee Family Development Center and local pediatricians are helping the foundation locate children in need whose guardians can sign them up for the program.

Sarah Quarantotto, executive director of Miriam’s House, a nonprofit focused on ending homelessness and rebuilding lives, said homelessness is particularly traumatic for children, and educational opportunities are crucial in allowing children to succeed and thrive.

“Children experiencing homelessness are the same as their housed peers in that early learning opportunities such as The Imagination Library are vital in preparing them for educational success,” she said.

She said homeless children have often lost all their possessions and having the opportunity to receive a free book each month will not only impact their school success but will also rebuild their sense of home and dignity.

Omotoye said many of the families the foundation is partnering with Miriam’s House are in stable housing with an address. She said the program also can send books to a family member of a child within the eligible ZIP codes.

According to the 2017 U.S. Census, Lynchburg’s poverty rate was 24% compared with the national average rate of 12.3%.

Jennifer Musana, a board member for the Aspire Foundation, formerly taught children with special needs and said she loves teaching children, including her own, how to read.

“So to get books in kids’ hands that may not have that opportunity, I think it’s a passion of mine,” she said.

She said kids who attend the launch party will not immediately get a new book from the program but they will receive a used book in good condition to take home.

Once the children register, it will take between four and six weeks for the first delivery of books to arrive, Omotoye said.

Niro Rasanayagam, a board member of the foundation, said she sees a lot of emphasis locally on early childhood development and preschool education.

“Not all families go to the library so it’s important to get books in the home environment,” she said. “If children are not able to read proficiently at the end of third grade, then they’re more likely to drop out of high school later on. So we want to give them the familiarity, the comfort and hopefully the love of books starting from when they’re babies.”

The launch party will have story time with crafts, snacks and an opportunity for residents of zipcodes 24501 and 24504 to sign up for the program.

The event is free and open to the public.