Trooper's use of force justified in April shooting, prosecutor says 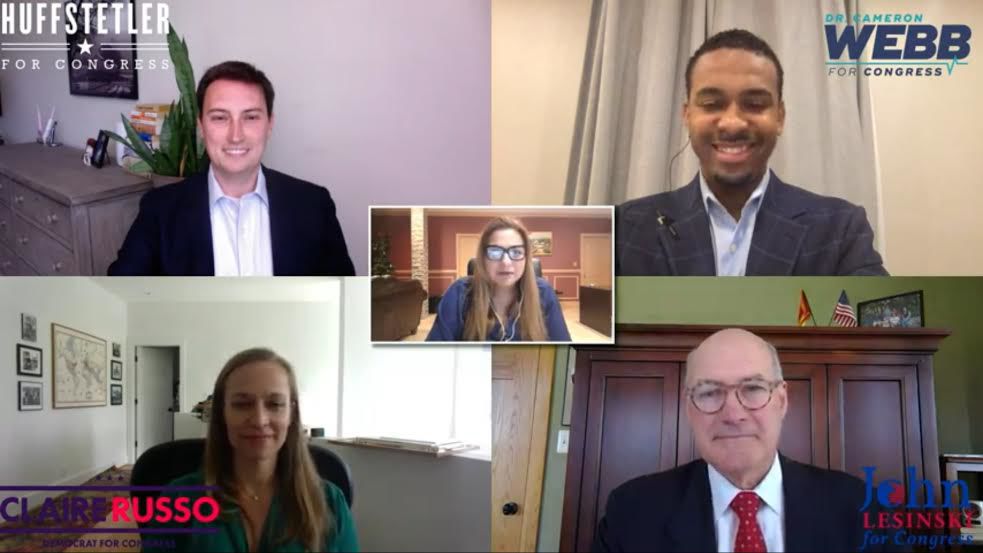 ROANOKE — Addressing the inequalities in the United States exacerbated by the coronavirus pandemic served as a major motivational force for Democrats running for Congress in central Virginia.

Political campaigns have had to adjust how they get the word out to voters while maintaining social distancing. So instead of a forum held at a high school or community center before a crowd of voters, the four Democrats participated in an online forum on Saturday.

The candidates all brought the issues they discussed, from health care to voting rights, back to the coronavirus pandemic as a reason to make bold improvements to policy at the federal level.

The four candidates are:

» Roger Dean Huffstetler, Marine veteran and Charlottesville entrepreneur who lost the Democratic nomination for the same seat two years ago

» Cameron Webb, director of health policy and equity at University of Virginia

Voters will choose their nominee June 23. The Democrat will face Rep. Denver Riggleman, R-Nelson, or Bob Good, who are competing in a heated convention that will take place in the next several weeks at a date still to be determined. While the district is favorable to Republicans, House Democrats are targeting the seat.

The 5th Congressional District is Virginia’s largest district, stretching from Fauquier County to the North Carolina border and including Franklin County and part of Bedford County.

Health care and economic inequality emerged as two of the most pressing issues during the forum, moderated by Del. Elizabeth Guzman, D-Prince William.

“This coronavirus pandemic has told us one thing: 2020 will be the health care election,” said Webb, who has made fixing the health care system the main focus of his campaign.

Webb, an internal medicine doctor, said making sure people can access affordable health care is more complicated than a three-word slogan. He worked on a White House health care team during the Obama administration to help implement the Affordable Care Act. He said the country can do better than having health insurance tied to employers, and there should be a public option.

“This pandemic has clearly demonstrated to all of us that every American must have access to health care,” Russo said.

The candidates said the pandemic has fueled a large growth in telemedicine. But Lesinski said people in rural areas don’t have that same access because they lack broadband.

He said as the country emerges from the coronavirus crisis and tries to rebuild its economy, rural America will fall behind unless it has the broadband needed to attract employers and to allow for people to work from home.

“It’s the rural electrification issue of our time,” Lesinski said.

Huffstetler emphasized his family’s working class roots and said his campaign is focused addressing economic inequality. He said the economy has been changing, and people don’t always keep the same job for more than 30 years, and workers need to upgrade their skills. He’d like to work on developing a program so community colleges and industries partner together to maintain a skilled workforce.

“My legislative priorities are making sure that when people work hard in this country, the country has their back,” Huffstetler said.

Russo said the federal government did not prepare for the pandemic as it should have done. Citing her own background as a Marine officer training Marines and an intelligence officer learning lessons from past wars and applying them to the future, she said she’s equipped to work on steering the country out of the crisis and preparing for future ones.

“It’s never been more clear that it’s going to take bold leadership to guide this country out of this crisis in a fair and just manner,” Russo said.

Lesinski connected the poor planning for a viral outbreak to the lack of bold action on climate change. Climate change is a legislative priority for Lesinski, who said reducing the country’s carbon footprint and shifting to renewable energy will create new jobs.

“It’s a canary in the coal mine for fighting climate change, because if we don’t get on this now, we’re going to lose a lot more lives,” he said.

The candidates all agreed the pandemic has highlighted the need to expand voting rights. Huffstetler said there should be automatic voter registration when people get their driver’s license. He said working people can’t always make it to the polls on Election Day, so he said being able to vote absentee without providing an excuse is essential.

“There is no reason under the sun we should be making it harder to vote,” Huffstetler said.

Lesinki said even though states are making progress in expanding voting rights, more needs to be done at the federal level. He referenced the federal court decision this week to waive the witness requirement to cast absentee ballots in the June primaries in Virginia.

Republicans tried to retain the witness requirement, citing the risk of voter fraud. There is no evidence of widespread voter fraud with voting by mail.

“The strategy here clearly is voter suppression, voter suppression of those individuals the Republican Party feels is going to be a continued threat to them winning or gaining a majority,” Lesinski said.

“I think when we field the full team as Democrats, when we expand the electorate, we win,” Webb said.

Rep. Denver Riggleman is being himself

FAUQUIER — Republicans in Virginia’s 5th Congressional District chose a convention to pick their party nominee next year, setting up a competition between Rep. Denver Riggleman and at least one other opponent.

Clearly, these candidates understand the disparities suffered in many rural areas of the District. These disparities

1. are REAL and involve EVERYTHING including health, education, employment, self-sufficiency and resiliency of individuals, families and communities;

2. they are SIGNIFICANT, impacting longevity (longer or shorter life/early mortality), prosperity (access to opportunities, good jobs to support self and family and contribute to community; life long learning and development of career and wealth), and well being.

3. they are historically entrenched and socially entrenched in certain areas, populations and zip codes. One quick way to SEE this is to look at the Virginia map on County Health Rankings website.

Any candidate - of any Party - who FAILS to discuss this map and how to change it does not DESERVE anyone's vote. This map - about disparities in health outcomes coincides substantially with other maps: maps of disparities in Broadband coverage, maps of less equipped schools and less successful educational attainment, maps of less access to important life saving services (elder services, family violence and abuse services, etc).

These candidate do seem to understand this & so does Mr Riggleman. So, the winner of the Democratic Primary needs to be ready to distinguish self NOT by being politically partisan but by stating commitments. What?! don't they need to be more partisan, you might say? nope! wrong!

Why? because Democratic political partisanship in this District means being an impotent lap dog to wealthy and privileged elites, who have fantasies of being powerful, but who cannot even win the Fifth District! How impotent is that?! very very very impotent! Democratic partisanship in this District is 'managed' by cultural elites who like to talk a lot about 'privilege' - usually they are 'against' it - but they still exude the ignorance, arrogance, and hatefulness of most privileged groups. They are the oh-so-very privileged complaining that Republicans are privileged elites. This delusion is a big component of their impotence across the District.

For example, living many years in Charlottesville that is very very very clear! They have spent YEARS talking about racism while the Democratic cultural elites sustained 'Jim Crow' segregation in the City! Hypocrisy is not pretty is it? Why would they do that?: because it suited their selfish interests for higher and higher housing values, meaning both real and symbolic health and privilege! When things began getting too hot for them they manipulated real distress and upset and anger about the legacy of Confederacy-worship vested in Confederate statue imagery (a form of idolatry that all Bible believers should oppose, for real, since God said so!) - into a Culture War of talk, talk and more talk, that ultimately resulted in the horrible violence that we all know about. It was not Republicans who disastrously managed years of distraction and failure but Democrats: That benefited City Democrats, because talk - and particularly BIG TALK - big loud, name-calling, bullying talk - is the typical way that cultural elites maintain their game of distraction and social control. And what came of it? we all know. And what else came of it: years of 'talk' against public health and public safety in the City and years of depletion of those necessary resources. In the months before the Pandemic destroyed so much Democratic 'big talkers' in Charlottesville were demanding or defending FEWER law enforcement and FEWER fire fighters in the City! Can you believe it! FEWER fire fighters! WOW. THAT Is what the Democratic 'big talkers' were falling all over themselves about in the months before the Pandemic! For years of Democratic Big Talk the City's public health and public safety was suffering decline, not to mention public education, public transportation, public confidence, etc. Democratic partisanship that lets cultural elites lead is a DIS-functional, DIS-aster!

Now we see what happens when Democrats let Big Talk cultural elites take over the Party and forget what it means to SERVE all the the people: all the WORKING CLASS people - like small business, like fire fighters and law enforcement and corrections officers, like school teachers, like farmers - and ALL THE RURAL PEOPLE - not just city and university cultural elites.

It will be a great day if and when - as Dr reminds us - that tens of thousands of UN-registered voters and NON-voting voters, are motivated to vote, of course by better and more convenient means, that also ensure integrity of voting, and protection of voters rights. That will be a great day.

But it is not - as Dr suggests - only Black-identified voters that Democrats need - but also many working class voters of any or all colors, non-colors, alternative- colors, color-blind colors, mixed colors, and other identities. A 'radicalized' campaign cannot win in the District, nor should it. Just as a 'privileged elite' lead campaign cannot win, and should not.