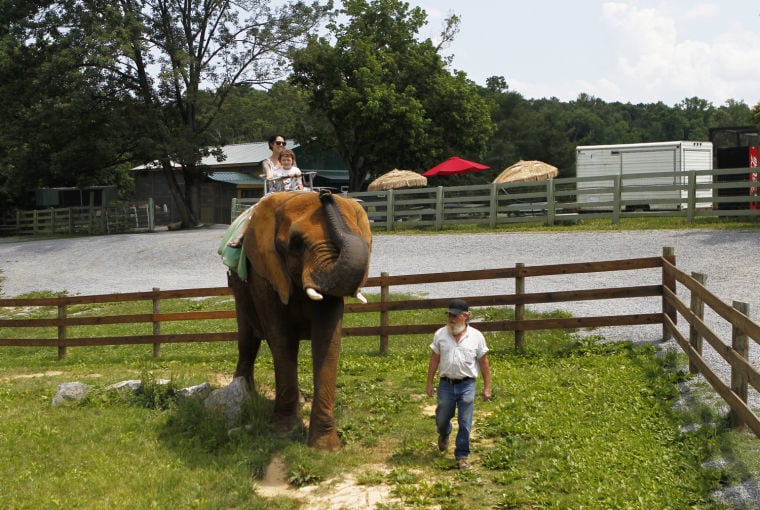 Mark Easley of the Natural Bridge Zoo walks alongside Asha as she gives Tanya Noe of Norfolk and her daughter Eliana, 4, a ride on her back in this June 2014 file photo. Asha, who is now about 36 years old and weighs 9,600 pounds, is a regular fixture at the zoo. 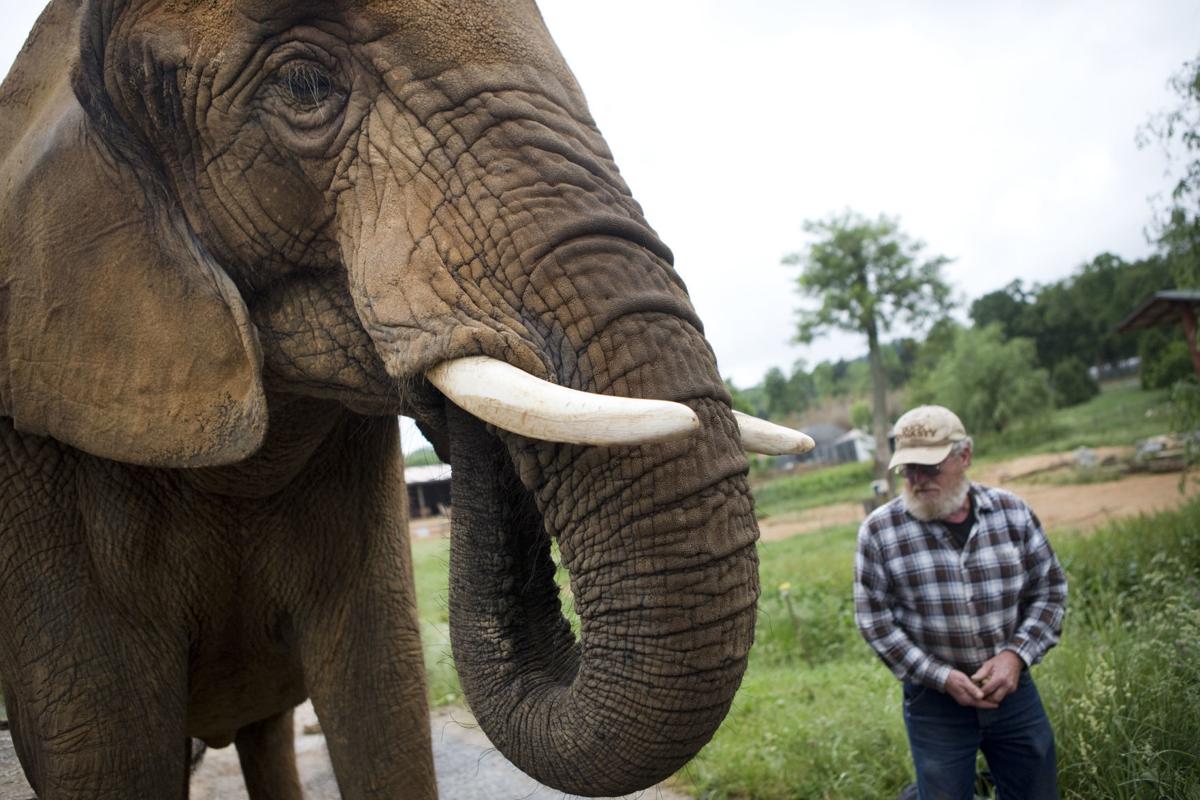 Asha, a 36-year-old female African elephant, is fed by her handler, Mark Easley, at the Natural Bridge Zoo in Rockbridge County. 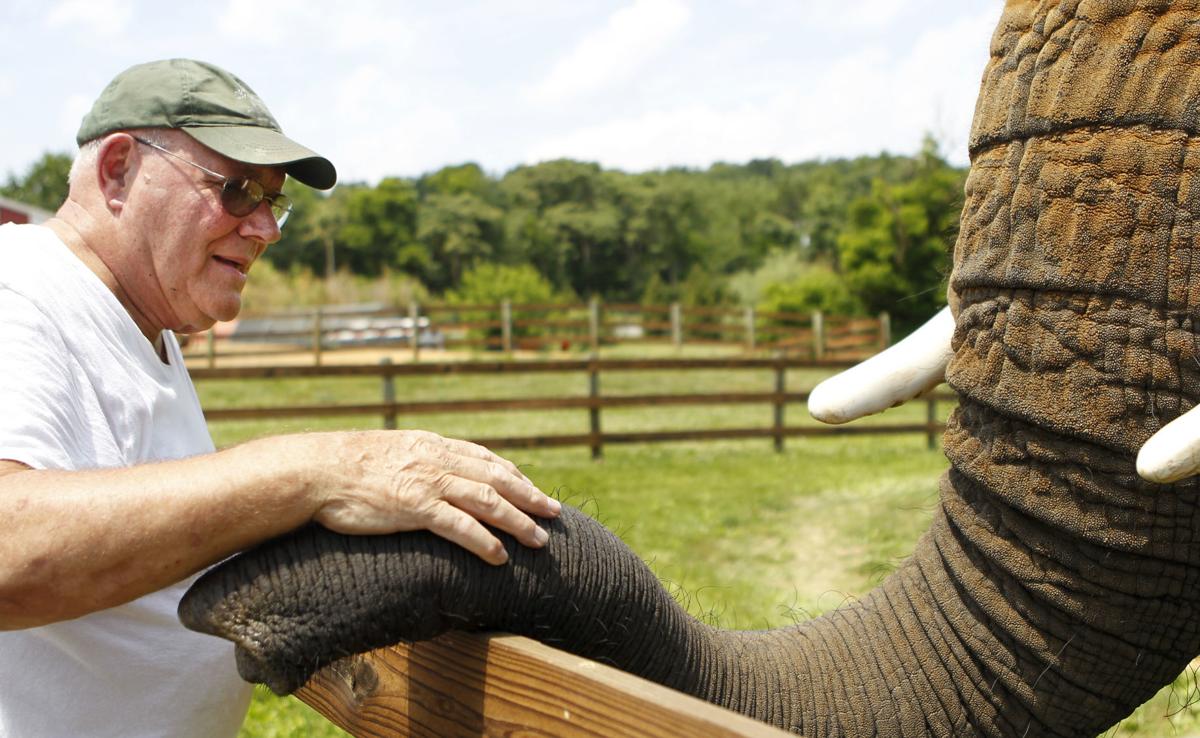 Karl Mogensen pets Asha, an African elephant at the Natural Bridge Zoo. Mogensen opened the zoo in 1971, and Asha arrived there 35 years ago.

RICHMOND — It stuns Karl Mogensen that anyone could think Asha would ever hurt anyone.

“She’s probably similar to a golden retriever under your coffee table,” Mogensen said.

Asha is a 9,600-pound African elephant. She’s about 36 years old, and she’s been a fixture at the Natural Bridge Zoo in Rockbridge County since she arrived there as an orphan 35 years ago.

About three times per day, people climb up onto her back and take her for a ride. Mogensen said he’s never had an incident in which Asha has hurt anyone.

She’s the only known elephant that lives year-round in Virginia that people can get close to and ride.

The General Assembly nearly put a stop to that. State Sen. Lionell Spruill, D-Chesapeake, introduced a bill that prohibits keepers of “dangerous captive animals” from allowing people to come in direct contact with the animals. The original legislation listed “dangerous captive animals” as bears, cougars, elephants, jaguars, leopards, lions, primates or tigers. A violation would be a Class 3 misdemeanor, and the keeper would face a fine of up to $500.

After some advocacy work from Mogensen and a Shenandoah Valley senator’s amusing memory of Asha, the legislation eventually got changed to exclude elephants. The Senate voted 31-8 Monday to pass the bill.

“We’re happy elephants were excluded,” Mogensen said Monday. “They tried to list her as a dangerous animal.”

Mogensen said he has been discussing the legislation with attorneys and groups that advocate for animal owners, and they’re keeping an eye on it in case an effort is made to insert elephants back into the proposal.

Mogensen came to the Capitol last month to speak against the original proposal, telling a panel of lawmakers focused on issues related to animals that Asha loves giving people rides.

“This elephant gets the very best of care,” Mogensen said.

Spruill was torn, suggesting the possibility the bill could be written in a way to exempt Asha.

“Just by their very size and nature, they can be very dangerous,” Sen. David Marsden, D-Fairfax said.

This specific panel that deals with animals can draw impassioned animal-lovers. It discusses issues like animal testing and euthanasia of animals in shelters.

A few different organizations favoring the bill wanted elephants included. The speakers were all aware of Natural Bridge Zoo and Asha, and their groups have tangled with the zoo for years.

The organizations have been involved in stealth visits to the zoo to collect information to complain to the U.S. Department of Agriculture and the Virginia Department of Game and Inland Fisheries. Both agencies license and inspect zoos.

In 2017, a spokeswoman for the U.S. Department of Agriculture confirmed it was investigating the zoo as part of a formal process that could lead to an administrative law proceeding to determine whether its license should be suspended or revoked.

At the time, inspections by the agency had found more than 30 violations of the Animal Welfare Act, including inadequate veterinary care, deteriorating buildings, cramped enclosures, a lack of perimeter fencing and a rat infestation. It also found a flimsy fence separating Asha from visitors.

A USDA spokeswoman has since said the agency no longer comments on whether a formal investigation is pending.

But Lisa Wathne, a strategist with the captive wildlife protection program of The Humane Society of the United States, said her group was told by a USDA administrator in late January the investigation is still open.

The panel of lawmakers kept elephants in the bill and moved it forward through the legislature.

But a week later, another committee of lawmakers discussed the bill, and it triggered a fond memory of Asha from Sen. Emmett Hanger, R-Augusta.

Hanger smiled and chuckled as he told a story about how he and Jim Gilmore, who was running for governor, were campaigning in Rockbridge County. Hanger was at the Natural Bridge Hotel and Conference Center when he felt a tickle on the back of his neck. He turned around, and realized Asha was tickling him with her trunk.

Hanger suggested removing elephants from the list of animals, and the agriculture committee agreed to that change.

Sen. Jennifer McClellan, D-Richmond, questioned the vagueness of the bill. Her young son loves elephants, so she’s learned a lot about the animal that’s the symbol of the Republican Party.

McClellan said some zoos have secure exhibits that allow people to feed elephants or touch their hide as part of an educational presentation. She said this bill would exclude that type of activity at a zoo in Virginia if it wanted to do that.

“I promise I will never bring another bill dealing with an animal,” Spruill said.