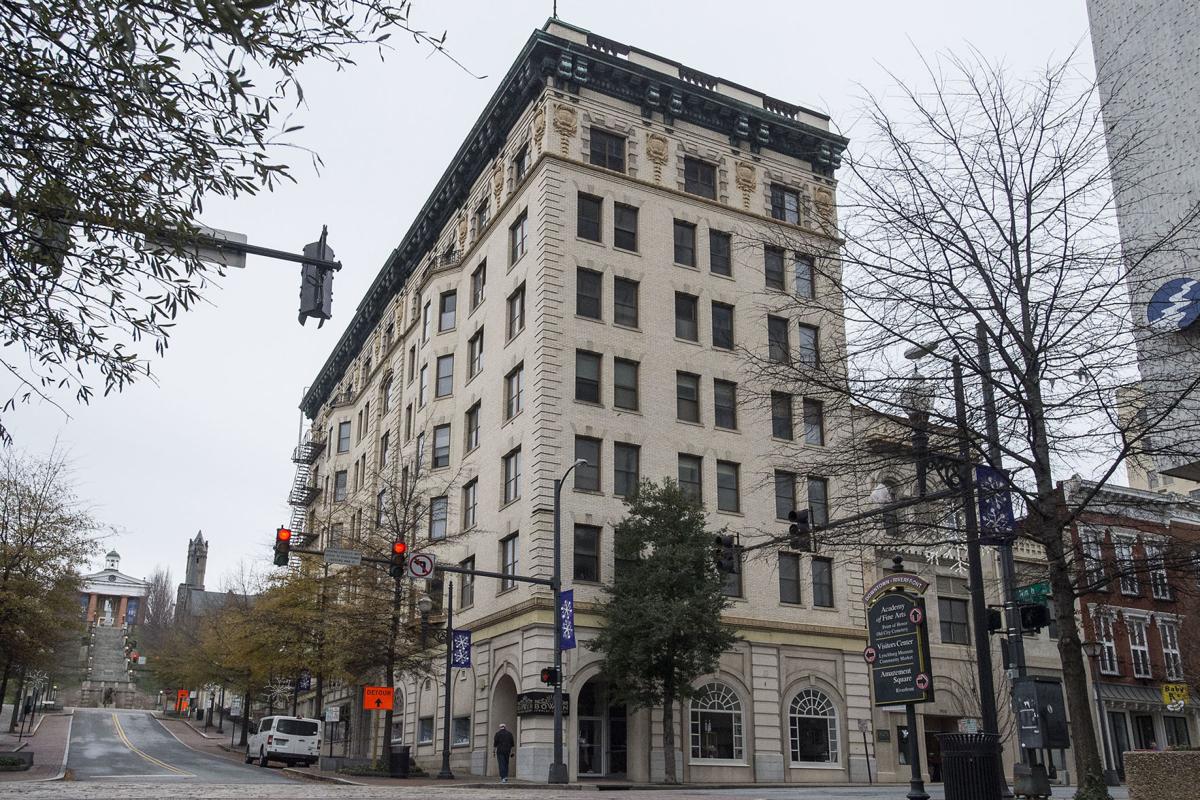 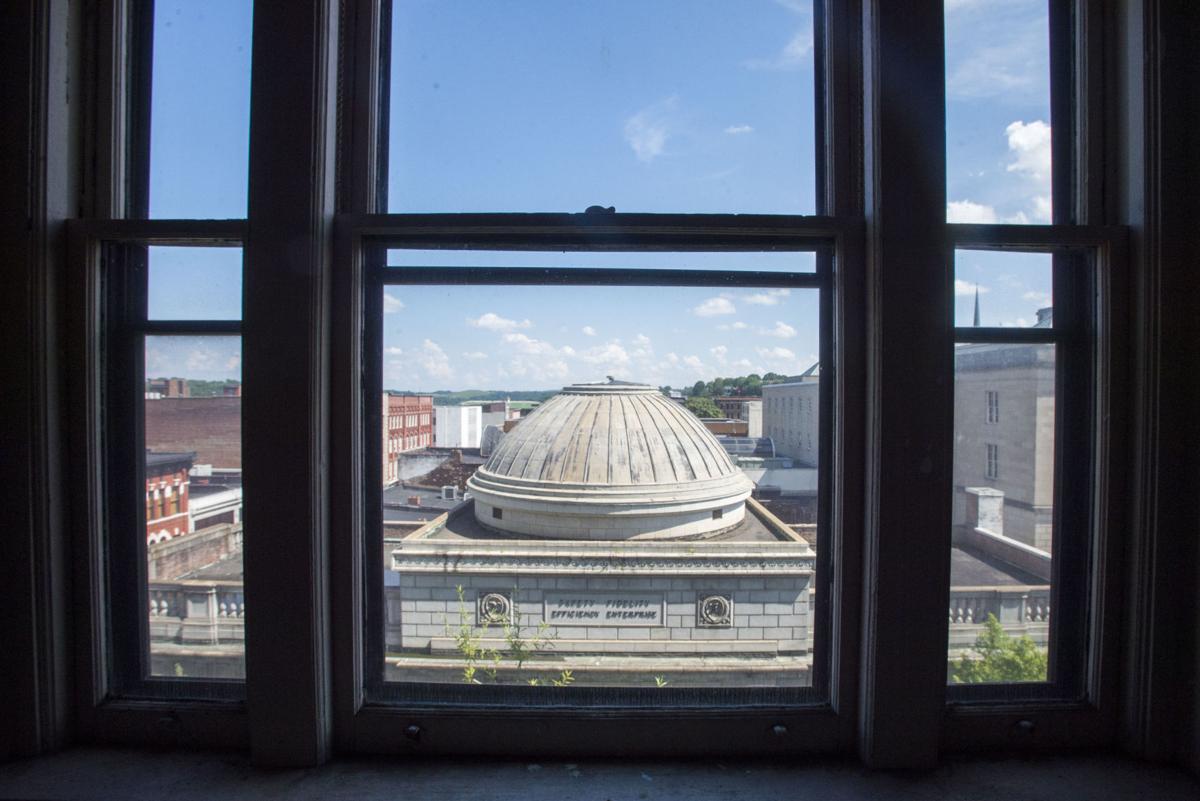 The view from the sixth floor of the the Krise Building on July 26, 2018 in downtown Lynchburg, VA. (Photo by Taylor Irby/The News & Advance)

After 10 years of planning, the circa-1905 Krise Building downtown is finally on its way to becoming 21 New York-style luxury apartments with two penthouse suites overlooking iconic sites such as Monument Terrace, the James River and the former Lynchburg National Bank building on Main Street.

Developers hope to start construction after closing on the landmark property Wednesday afternoon. Construction should take about a year. They hope to open in late summer 2019.

The building, located on the west corner of Ninth and Main streets, was the city’s tallest building at seven stories when it opened in 1905. The ground floor was home to the American National Bank, with six floors of office space above.

“We knew we needed to complement all the new renaissance of downtown Lynchburg,” McCauley said. “Right here, in what we think is kind of the nerve center of downtown. This little corridor here with City Hall and Krise Building is, without a doubt, one of the most spectacularly built buildings in the city.”

Developers recognized the presence of lofts and condominiums downtown but felt New York-style apartments were missing from the mix.

Harrison said the style will be more refined and finished off than what residents would find in a loft.

“We felt this was the ideal opportunity to place that in the market to complement what is already here,” Harrison said. “For the health of the downtown community, I think this will go a long way in helping in that regard.”

The apartments will feature eight one-bedroom, eleven two-bedroom and two three-bedroom units. With the recent opening of the $30 million renovated Virginian Hotel in May and the pending $29 million renovation of the Academy Center for the Arts in December, McCauley said the timing is perfect for the Krise.

“All of a sudden, Lynchburg is becoming a small-town cosmopolitan city,” he said. “This will be in line with the high-end luxury apartments. We’re really trying to attract high-end commercial and retail, like Bowen’s.”

Lynn Kirby, owner of Stimulus Advertising, who is handling the marketing of the Krise, said the penthouses will have the latest in upscale appliances, premium countertops and flooring.

“Residents can expect a blend of modern, framed in classic history,” he said. He added the more residents there are downtown, the more general traffic, restaurants and retail will follow.

To build the seven-story, 40,000 square-foot Krise today, the cost would be astronomical, Harrison said.

“People will never be able to live in this type of architecture again, because it’s too expensive,” he said. Because of that, the price point for rent will be higher than what is in the area’s market. Harrison would not disclose prices of the apartment as the marketing campaign is incomplete at this time.The apartments, which have abundant natural light, will range in size from 800 square feet to 2,600 square feet. There also is a parking lot for residents.

In 2016, Lynchburg City Council voted to forgive more than $22,500 in debt of the previous owner. City Council now expects to collect about $94,000 from the owners to pay off all the back taxes plus the interest that has accrued.

“When we started this whole process, a developer tries to put a building into its highest and best use, but in your efforts to do that, you’ve got to play in the same sandbox with all these other participants,” Harrison said. “[Virginia Department of Historic Resources], the federal investing part of it, you have to comply with that. The lending program, you have to comply with that. Trying to get all these things to work together is a real puzzle and it takes a lot of time.”

The project went through a metamorphosis over the course of several years. Krise Partners, LLC paid a down payment on the building in 2010.

“A project that sits in the middle of the heart of Lynchburg can’t be something you flip and turn real quick,” he said. “It has to be something that sustains itself over a long period of time, and that’s what our partnership group was bound and determined that we were going to do.”

The city of Lynchburg was extremely cooperative with the project and with the ownership group in trying to get it moving forward, Harrison said.

He said there have been some internal changes with the city, such as policy changes, but it hasn’t thwarted efforts to move the project forward.

“There were some past real estate taxes that were due on this property, which we’re going to bring all up to current when this property closes so the city will be back in good shape at that point,” he said.The building was formerly owned by Krise Building Associates, LLC.

There have been multiple issues with the building, which was built in 1905, McCauley said, but that doesn’t take away from the gem it is.

Due to the construction efforts related to lending requirements, Hot & Cold Café, located in the Krise on the corner of Main and Ninth streets, will relocate to a destination to be determined so as to mitigate the effects of construction.

With the announced changes coming to the Lynchburg National Bank and Trust Company, which will be completed by developers Mark Little and Todd Leap, the two will use the Krise for office space during construction.

"Hot & Cold will have to leave, simply because we have a lot of work we have to do in there,” Harrison said.

The building will be brought into compliance with the American with Disabilities Act, which required “disruption” at the café, according to Harrison.

McCauley said the ownership group is working to help the café look for another location, preferably downtown.

“They have such a loyal customer base,” he said. “They’re good people.”

The first floor of the Krise is made up of four units, but to become ADA-compliant, two of the units have to be combined.

BaileyGrey Interiors will not be operating out of the Krise building. That information was incorrect in an earlier version.

After 10 years of planning, the Krise Building is finally on its way to becoming 21 New York-style luxury apartments with two penthouse suites…

As soon as next month the Krise building could start showing up in your social media feed.

Six months after Lynchburg City Council voted to forgive more than $22,500 in debt to encourage the redevelopment of the century-old Krise bui…